Aiight, so check it.

You need to do the research. This toy/art piece/whatever has some history to it. And I'm not just referring to 1954's The Creature from the Black Lagoon, which you should all be familiar with! 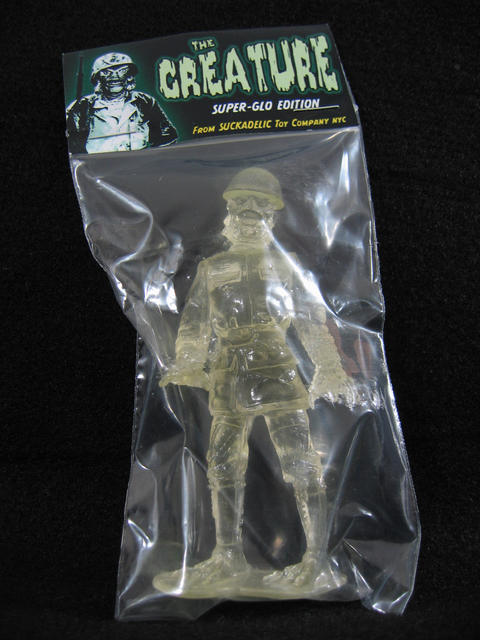 First of all, you need to learn about Remco's 1980 "Mini-Monsters" toy line. This early 3-3/4" scale line of Universal Monsters action figures is sick and is totally worth tracking down. Now, specifically, check out the gillman figure in this line.

Nekrodave hooked me up a while back with a link to an eBay auction for the glow version. It was loose but in great shape; scored it for the cost of a sammich and a song (Public Enemy's Cant Truss It, I believe). 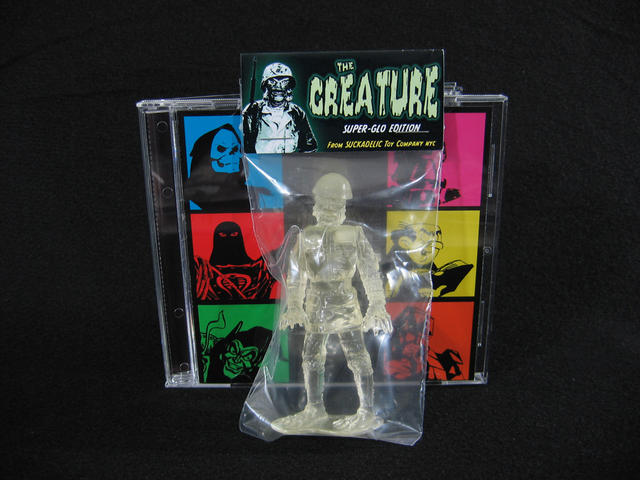 Now, what you need to do with get with Suckadelic. Peep the hilarious videos. Check out the even-iller bootleg toys. The mastermind behind all of this, The Sucklord, is a cool muthaluva and one seriously creative cat...with a pretty sick sense of humor. We like that.

And once you've wasted your afternoon on his website, go back and check out Nekrodave's killer coverage of Sucklord's first "The Creature" boot. It sucks. No--wait! It kills. Awww...I'm all confused now...

Basically, Sucklord took one of these: 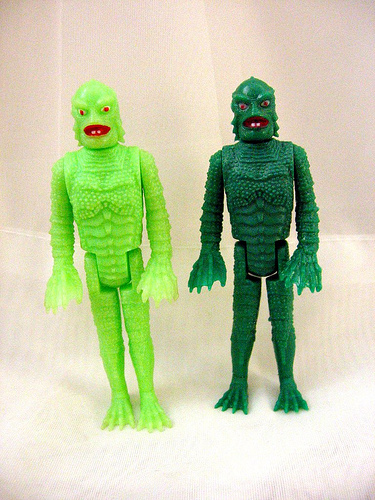 Mashed it up with one of these: 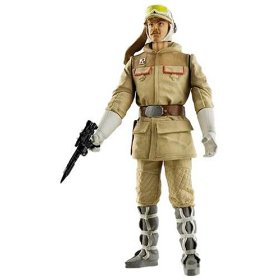 Sculpted an American WWII-style helmet and base...

And delivered us wrecked souls of forgotten war! Why? Why the hell not?? It's fantastic. Just reading the back of the card of Nekrodave's non-glow version gets me all pant-noodly. But more importantly (what's more important than my pant noodle?), peep that sculpt. It may not be totally obvious by looking at pics of the Remco, but weak paint app aside, the sculpt is actually gods damn brilliant. It's super-sharp, super-detailed, and does a killer job of capturing that gillman flavor we all love.

Sucklord done good when he picked this figure to boot. 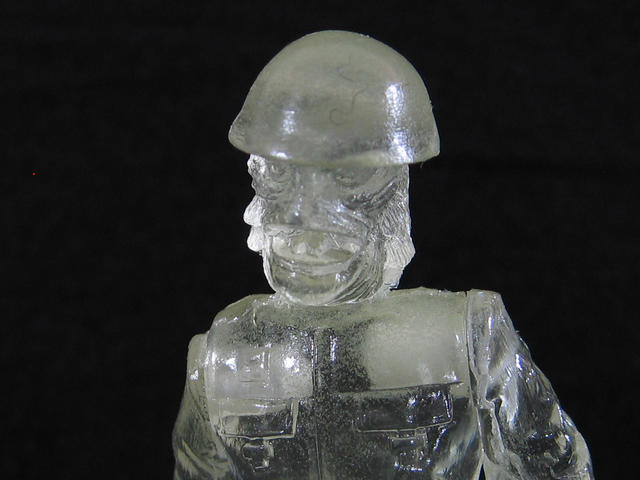 Yo, what's up with those buck teeth?? 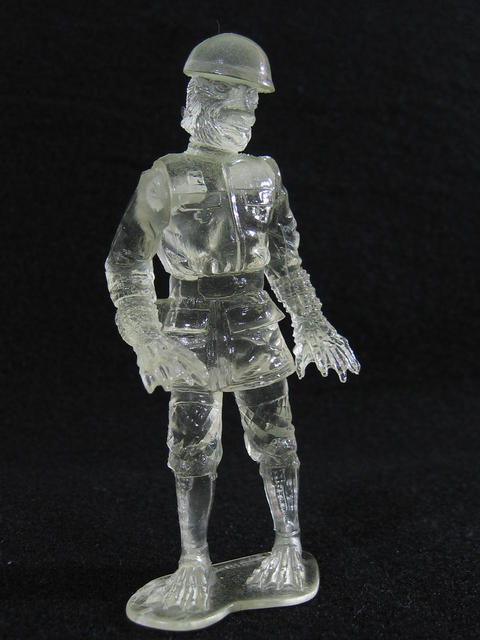 So, obviously, Nekrodave scored a pair (one bagged, one carded) of the non-glows a month ago. Heads immediately started clamouring for a glow version. I know; I was one of 'em. But then a couple weeks ago, Nekrodave posted the news we all wanted to hear. 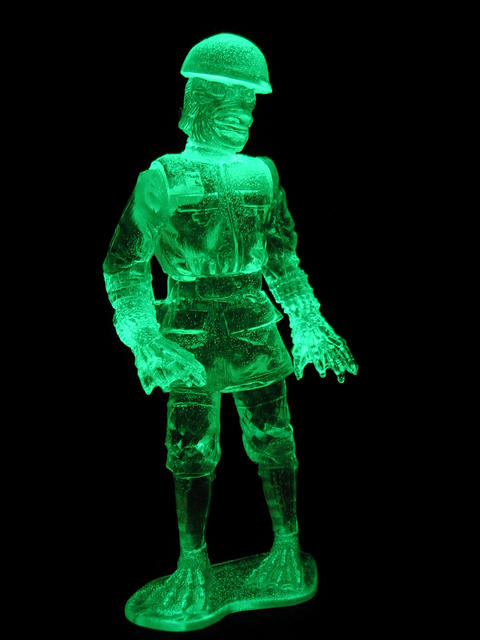 Not only was Sucklord making a glow version to complement the glow/non-glow Remco set, but he was dropping clear glow on us! That's right: crystal clear resin (urethane) infused with glow powder. I gotta tell ya, I was nervous at first. Mixing toy fetishes like this can lead to disaster. I think the Japanese designer vinyl kaiju company, Gargamel, was one of the first to pursue the clear-glow paradigm. The results weren't so hot. The "clear" wasn't all that clear--you could see the specks of powder in the vinyl...making it look kinda murky under normal light. And the glow wasn't very bright because there just wasn't enough of the stuff in the vinyl (adding more powder would probably have compromised the toughness of the vinyl).

Well, I'm pleased to report that Sucklord not only pulled it off...but Glo Creech is absolutely smokin'! At first, I was mad skeptical of the super-bright pics in announcement Nekrodave posted. But now that I have these suckers in hand...DAMN. They're super-clear with a very slight yellow-ish tinge around the edges...AND THEY GLOW BRIGHT AS HELL. 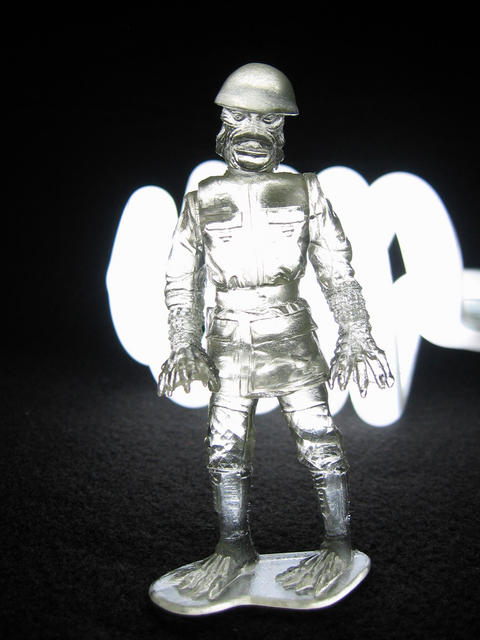 Sucklord clearly didn't use just *any* glow powder--he used the good stuff: strontium aluminate...not the classical zinc sulphides used in typical glow-in-the-dark toys like most glow vinyl kaiju. [Hey, as the Chief Glowologist, I gotta know this crap.] The glow is *extremely* bright and it lasts for HOURS longer than other gid stuff. 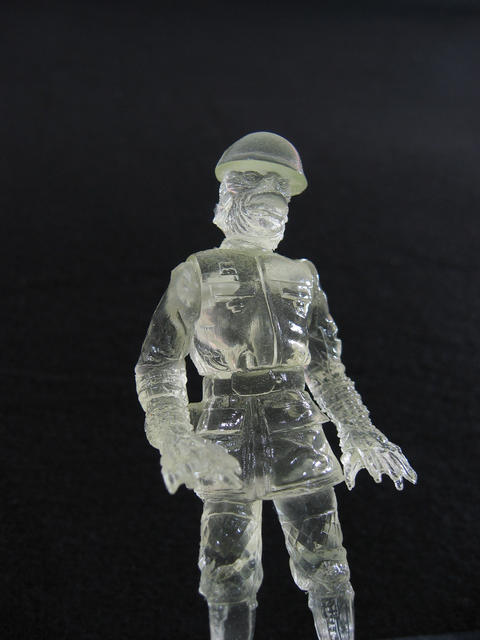 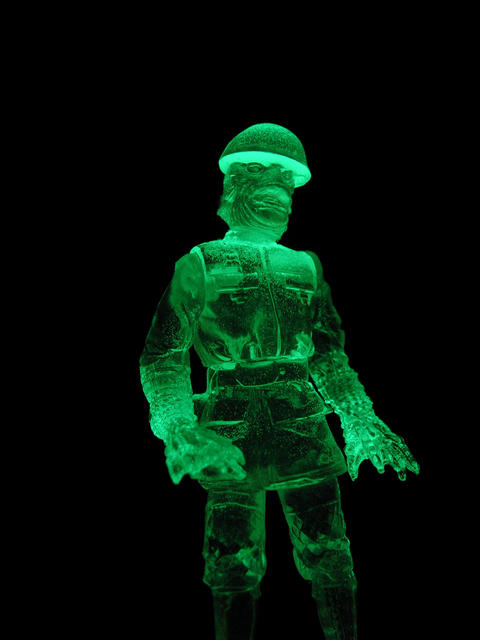 Folks, these pics aren't altered at all. In fact, I actually had to tune down my exposure times (15 seconds to 5!) just to get reasonable pics. This is the real deal. 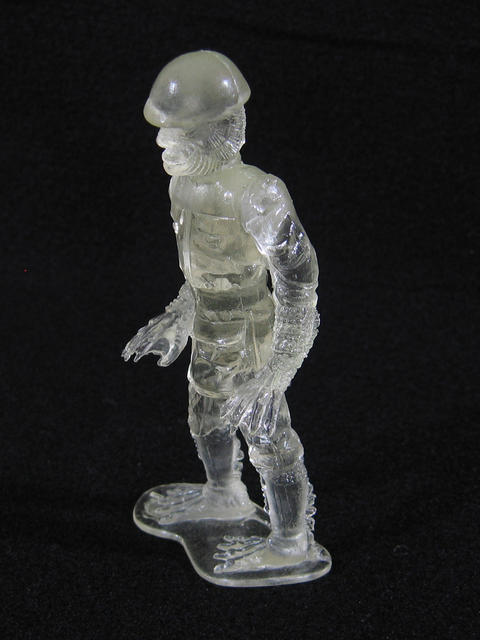 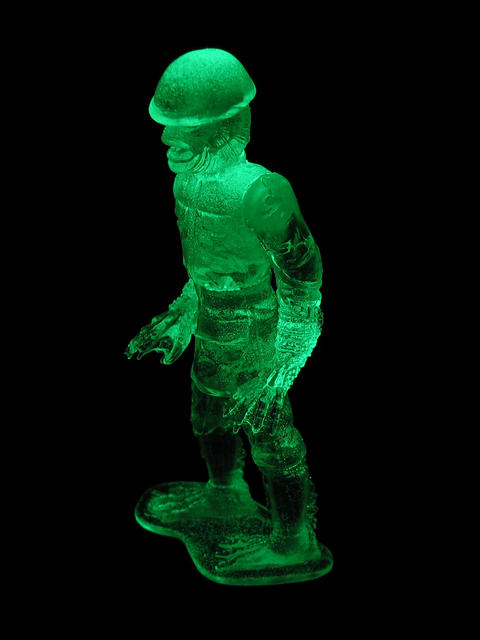 Seriously, go check out the gallery. Click on the pics to get some hugantic close-ups. It's worth it. 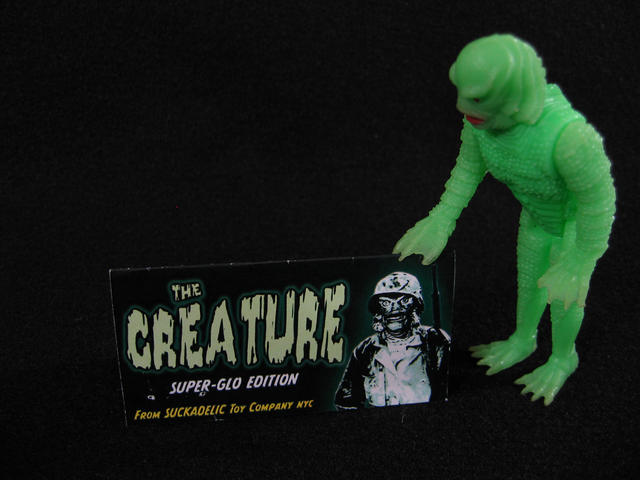 And, of course, I'd be amiss if I didn't include some shots of Sucklord's Creature along with the original Remco glowie gillman... 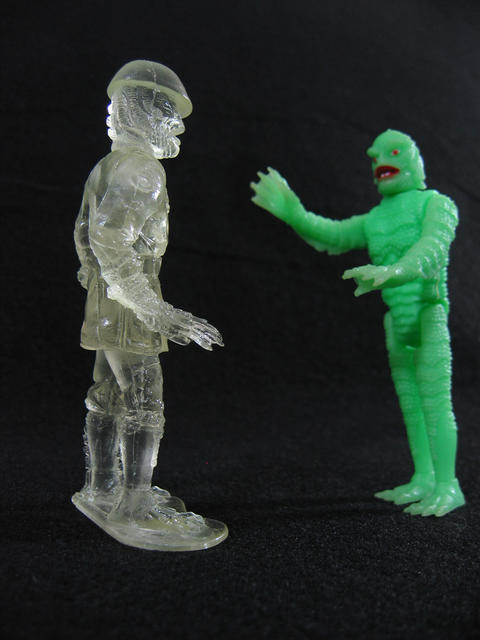 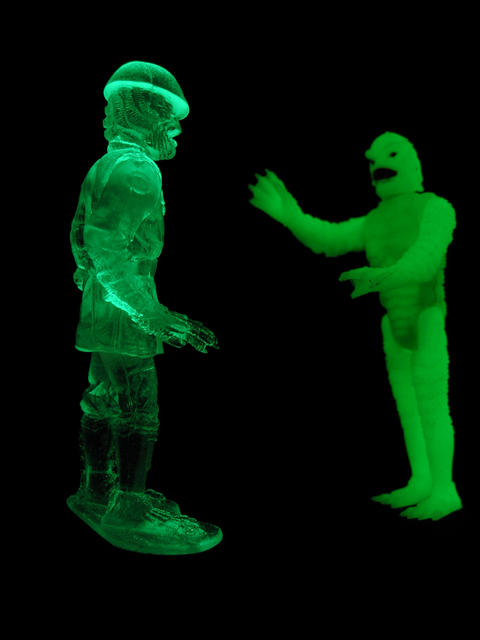 What can I say? The Remco makes a better action figure...but I think they get along pretty well. 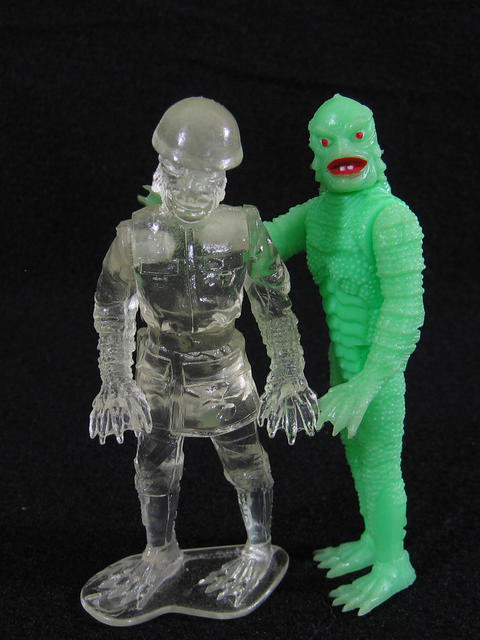 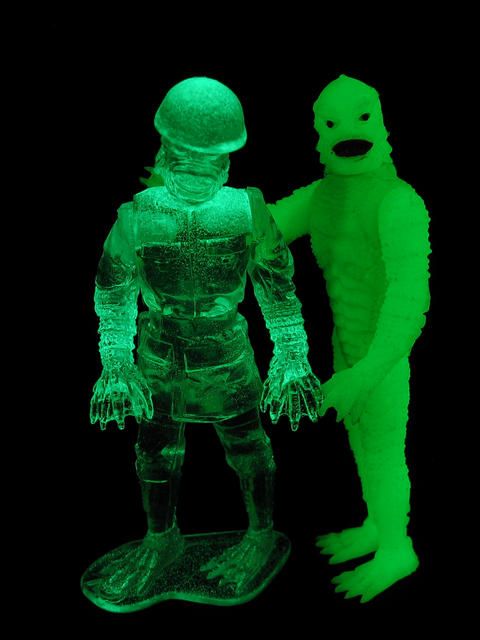 I've only got two beefs with this toy. First, as for the figure itself, the plugs attaching the arms into the torso are a bit too visible. I dunno. It doesn't bother me at all, but ya do notice it. Just scroll up and take a second look. I wonder if it woulda looked better to have no plugs and just super-glue the arms on... Either way, I ain't sweating it.

Second, the packaging. Oh, I've got no problems with simple bags and headers. However, I would have gladly paid extra to get that sick card some of the no-glow's came with. Thing blows my mind! I may just have to scan Nekrodave's and print that sucker out.

Oh. Uh...I guess no articulation could be a complaint..? I'm sure that grinds someone's gears out there. But this is a resin-cast bootleg made in some dude's apartment in Chinatown, NYC. Quit whining. It's pricey for what it is, but for a designer toy, it's classy, creative, and conscious...and it doesn't come with the pretense a *lot* of other such toys out there do!

Oh, and I guess you could complain that they're all sold out now... :( 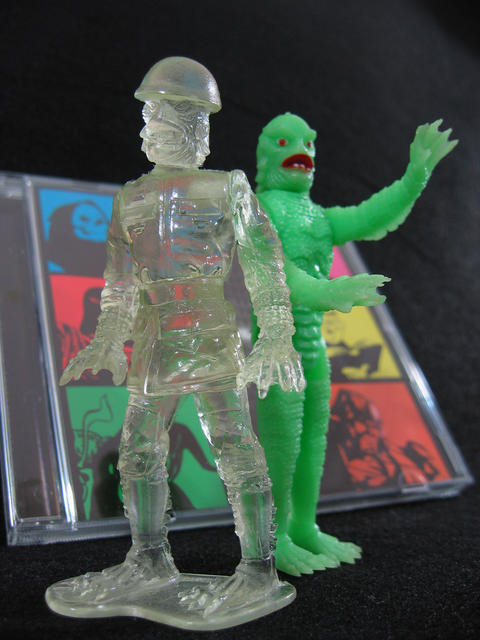 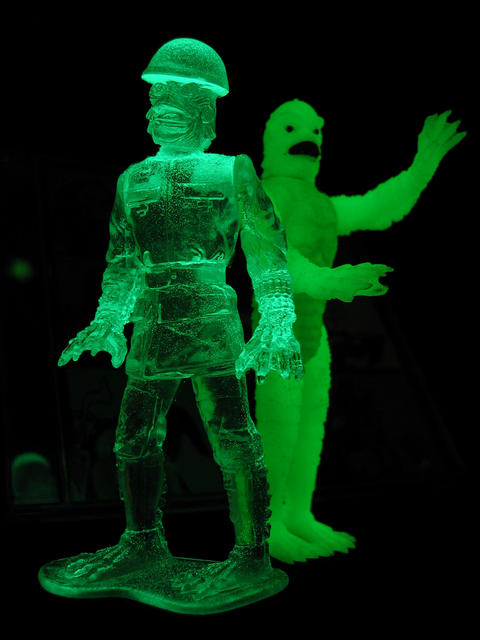 By the way, that CD in the background is Suckadelic's Supervillains joint. Ill beats y'all need to check out.

Well, that's about all I have to say about this one. You can bet I'll be keeping my eye on what Sucklord drops in the future. This cat's just too sharp!

I can't even explain to you how pissed I am that I didn't grab one of these before they sold out!! I hesitated for way too long. Should've jumped on this thing IMMEDIATELY.

And hey, while we're here, I did just get a different clear/glow toy in the mail the other day. I pulled the Govurom on the right of this pic from the first Onell Custom Corps: http://tinyurl.com/cq5zee

That clear head with glow powder is awesome! It's obviously a lot murkier than The Creature, but the glow does not disappoint.

You threw down for a custom too, right? When do you plan to share what ya got? ;)

Normally I don't go for "Toys as Art", but in Sucklord's case I have to make an exception. With him it's almost a toy, whereas with everyone else there is no real artistic merit. His way of hand casting thirty or forty pieces serves as a running commentary on consumer culture, which in my opinion includes Urban/ Designer vinyl. Genius.

I heard he's supposed to retire the bootleg series this year.

Doh! See, that's the one problem with figures like these: they're just not gonna last! Especially with me...picking up the last one in stock... :D

HOWEVER...there is great news on the way for Suck Creature fans! There will be *another* edition. Okay, it won't glow, BUT it's gonna be a collaboration between The Sucklord and Dead Presidents!! I'm not gonna say any more, but you can check out some news here. It WILL be smoking!

As for the Glyos Custom Corps, I actually didn't jump on any of these because I thought it would be best if they went to the hardcore fans out there around the world who deserve amazing one-offs like these. We're lucky enough to have Onell HQ in our backyards as it is! ;)

I didn't see your Govurom in the works, but the pic looks amazing! The glow-clear combo (separate pieces this time, not literally combined like in the Creature above) works great in these figures. Wonder when Govurom's going into production...

Anyway, I actually *DID* get a custom...just not one of the Custom Corpsmen. I'll be reviewing him soon enough...!

Materialist Zen, I know what you mean. Toys as Art is a concept that makes my stomach crawl...but you're right: Sucklord is one of the legit toy makers out there who can tap into folks' collective psyches and create something that appeals on more than just a basic level. And, yes, I've heard there's only going to be a few more bootleg sculpts, then he's moving on to more nefarious things!

Sorry, I just had to throw that in somewhere.

Dead Presidents collab sounds exciting...but honestly I have no intention of buying any non-glow version of the Creature. If it weren't for spectacular glow power, this type of figure would not be my thing, like at all.

As for Onell HQ in your backyards, you have no idea how envious I am. I think I could honestly say that Glyos are my favorite toys out there, with vinyls coming in at a close second. I regret it more and more every minute that I only ordered a single custom instead of two (which was the limit).

I'm pretty satisfied with the one that I did get, but some of the other ones out there are absolutely ridiculously awesome!! I've been trying to work out a couple potential trades with other lucky customers but it's tricky. Plus, my little nephew is becoming quite fond of the guy, so I might have to hold onto him for his sake.

I hear ya about little interest in a non-glow. While I love the classic unpainted green army men feel of the first Sucklord Creature figure, I'm not that inclined to track one down. I *love* the gillman, but I keep it glowy.

And not to derail this thread, but have you checked out OctoberToys' new Glyos forum? It's hot! DoctorKent's on there. I signed up, too...but between this place, CDX, and Skullbrain, my internetting time is stretched pretty thin!

That is exactly the deliciously terrible double-pun I had in mind. Was hoping there'd be a reason to go that far...and you did it for me!

Anyways yeah, I signed up on there. And all my attempts at trades have fallen through. No one wants to give up their Phase Arm'd Custom Corps guys. Guess I'll just have to be patient and wait for the wider release of those parts, and throw together some more of my own!