Home » Telco » The Creature From The Black Lagoon

The Creature From The Black Lagoon

When I recently started focusing my collecting habits more on monsters than robots, one of the things that immediately captured my fancy were motionettes. Motionettes are basically moving statues that are usually released as holiday decorations. Naturally, I am focusing entirely on the Universal Monsters, but all sorts of characters have been made from generic witches to Santa Claus.

The original and most famous motionettes were made by a company called Telco. The first releases they made were unlicensed and were 24" tall. Later, Telco would release officially licensed Universal Monsters in both 24" and 17" sizes. All of the larger sizes are harder to get and much more expensive than their smaller counterparts. 24" Motionettes come with a power cord, while the 17" ones function using two C batteries that are stored in the bottom of the black circular base the figure stands on. The figure is permanently attached to the base. 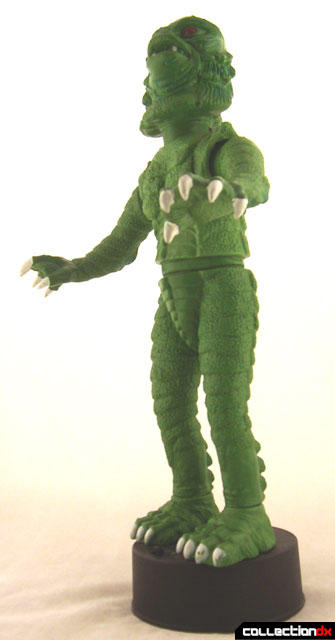 Even the 17" Universal Motionettes were broken up into two releases. Among the first releases were Dracula, Frankenstein, The Wolf Man and The Creature From The Black Lagoon. The Bride of Frankenstein and The Mummy were added for the second series. Each figure comes packaged in a cardboard box with clear cellophane on the front. I had the hardest time actually getting most of these back into the boxes for pictures, so here's Frankenstein instead of the Creature, just to give you a look at the box. Consider it a preview of a future review..

So, what exactly do the Motionettes do? Well, nothing too exciting really. The base has a switch with three settings, "on", "off" and "sound". Setting the switch to "on" makes the head turn and the arms raise and lower. Move the switch over one more spot to "sound" and the character keeps moving but now the eyes light up red and it makes noise. Now, the noise it makes doesn't necessarily have anything to do with the character itself. For instance, the Creature here actually produces a roar that sounds almost exactly like that of GODZILLA! 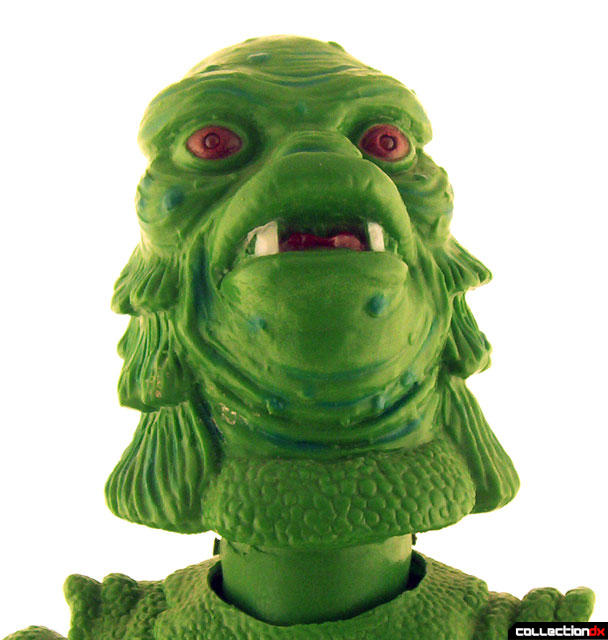 The Creature is made primarily out of soft vinyl, cast in green with red, white and blue painted highlights. Naturally, vinyl is the best option for a character like this, but many of the others in the series have clothing much like a doll would, as you can see in the Frankenstein picture above.

The Creature from the Black Lagoon seems to be the easiest from this series to get. It's certainly the one I've seen most on eBay.