Oh, poor Cosmos. For some reason this little guy just can't seem to get a break. Whether it's in the cartoon or comics where he's an eternal joke, to real life where it seems every single time a toy of him comes out, he cancels a line! And thanks to the help of a rumor started earlier this year regarding the cancellation of the Generations Legends 2-packs, poor Cosmos was once again blamed for ending yet another line. But not this time! Cosmos and Swerve showed up mere days after the panicking news at Toy Fair 2014 and helped quell the uproar from the fandom (while also making a few people who anxiously paid well over retail for these guys feel a bit silly). Now just a few months later, these guys are sitting on shelves right now and I can proudly say that Cosmos is no longer a line killer; Cosmos is here to save the Transformers.

As always, Cosmos is an adorable little UFO saucer. While not the most inconspicuous alt mode for a robot in disguise, there is an undeniable charm to this little spaceship. 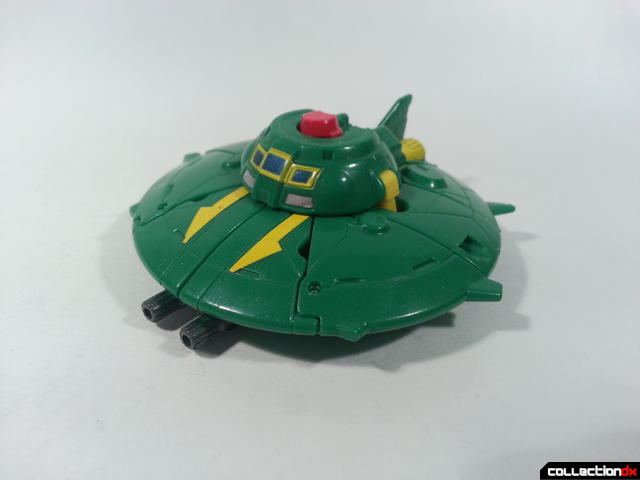 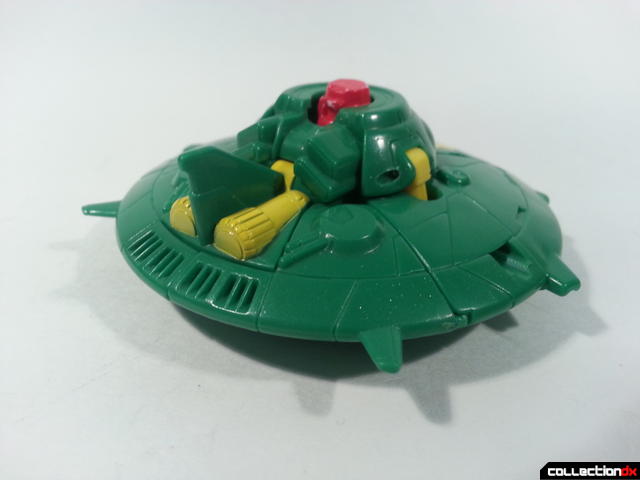 That's not to say that this new vehicle isn't surprisingly beefier than previous Cosmos toys. Cosmos has decked himself out with a pair of little guns on the front and gigantic nozzles on the back. Of course his head is just sticking up out of the top of the vehicle mode, but it wouldn't be Cosmos if it didn't do that. 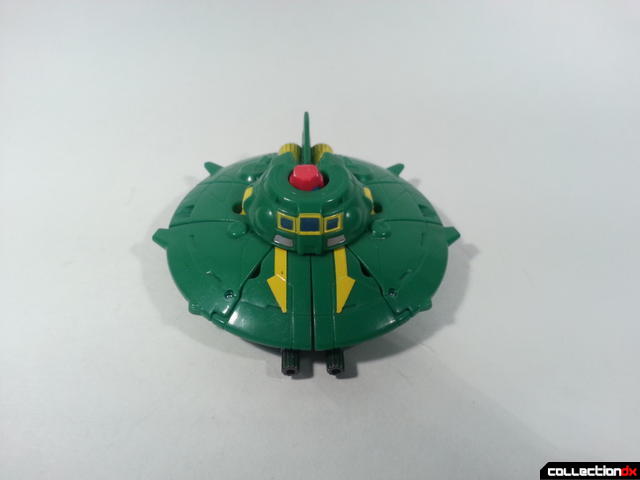 Also you can totally pull out the head in vehicle mode to have him look around while flying through space. 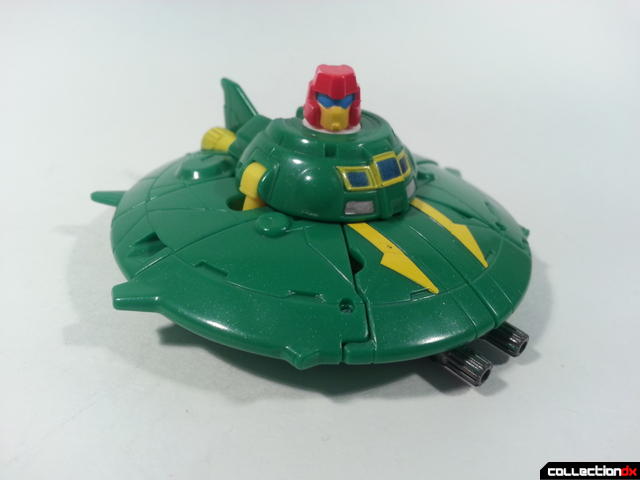 Like all of the other Generations Legends, Cosmos is paired with a partner Targetmaster. This little guy's name is Payload and he's just the tiniest spaceship. 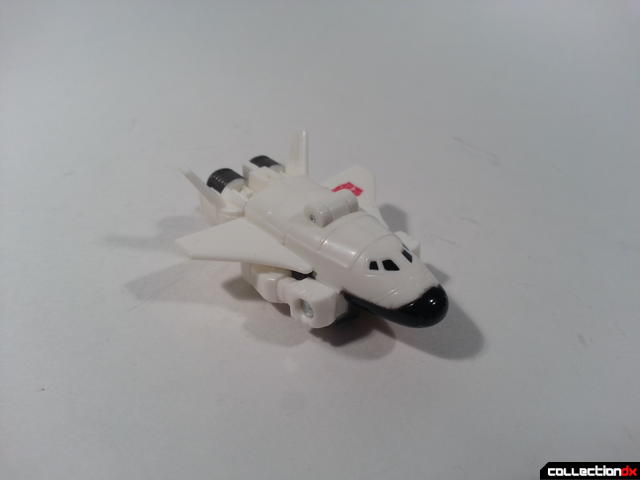 A common feature on a lot of the Generations Legends so far is a hidden combined mode for the two figures. Cosmos' consists of Payload plugging into the two guns on the front and hauling the UFO around like a trailer. it's oddly hilarious looking but very endearing. 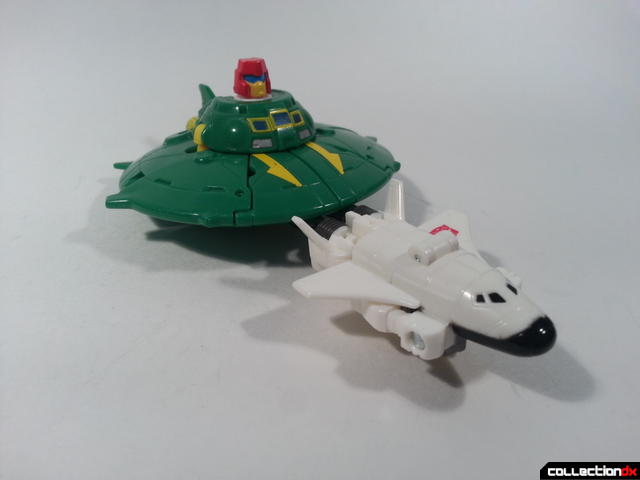 Even though Cosmos' transformation is basically just "Unfold a circle", there's a nice number of extra touches to make it more unique, like turning the waist and unfurling the legs as well. It really makes him a pleasant blend of simplicity and fun.

Although this is undeniably Cosmos in appearance, he has way more beef and heft to him than previous versions. He has large chunky arms and powerful, meaty thighs. All the while still managing to be the cutest little bugger I've ever seen. 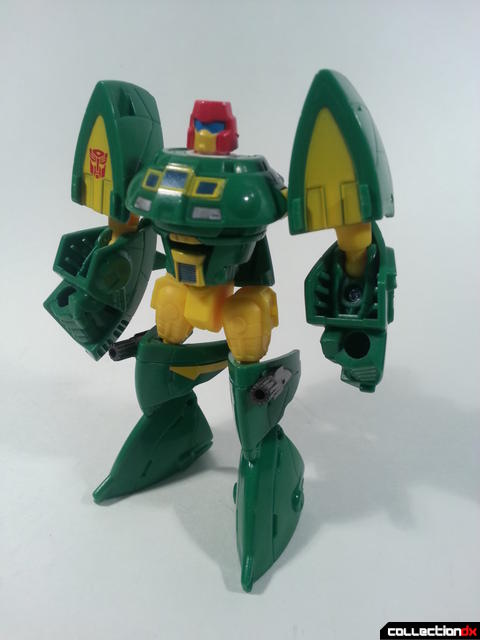 The rocket nozzles on the back do not peg in, but do make for a nice jetpack in robot mode. 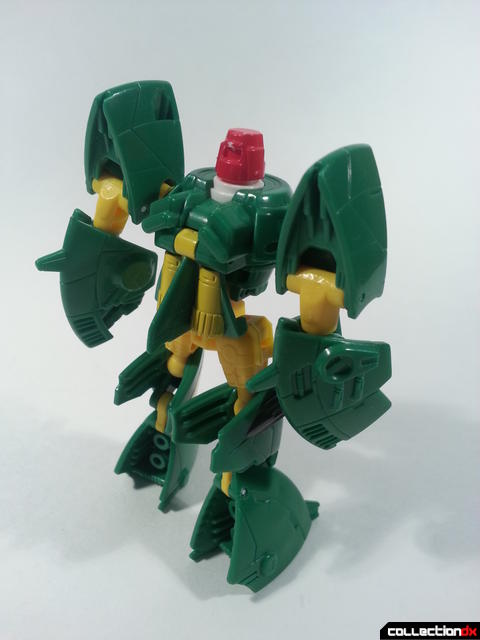 The articulation on Cosmos is great, dare I say some of the best so far in this line. His head can tilt left and right which is something a lot of these Generations Legends so far have been sorely missing. 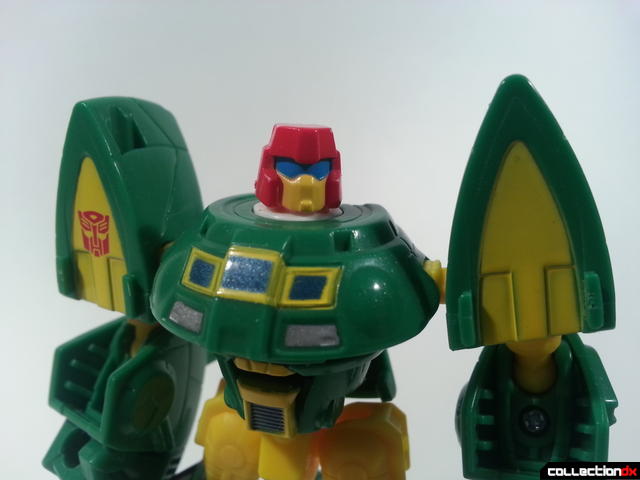 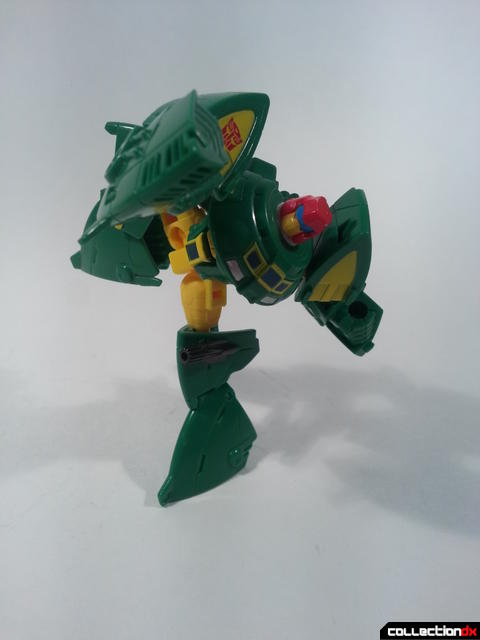 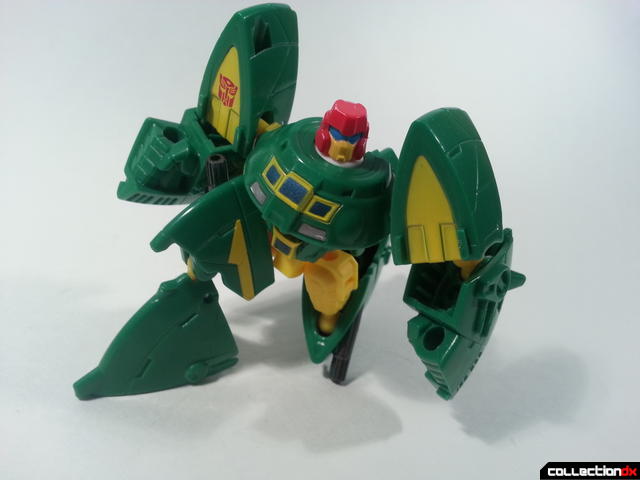 There are a few problems with Cosmos, though they are pretty minor. The first is his pelvis. Now the pelvis is supposed to lock into a straight position, but on mine it does not want to stay in the position and moving the hips will often make them click back out. It's not a huge gap and isn't a deal breaker, but it does make for a peeve that is slowly driving me insane. 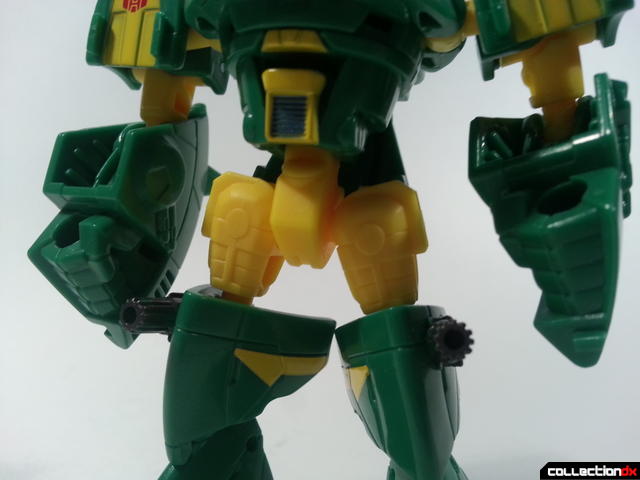 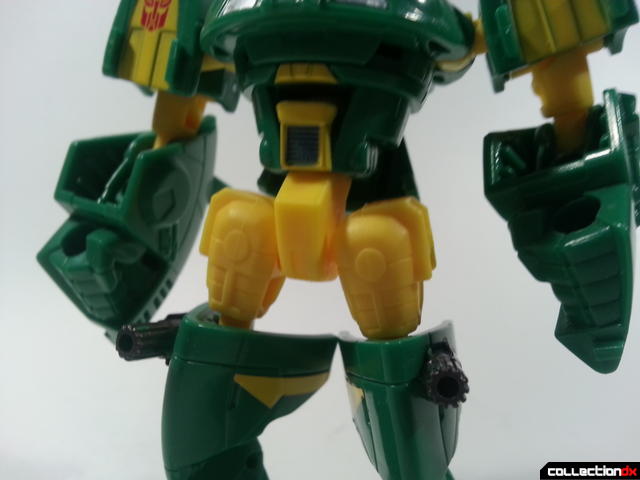 Another problem is something that seems to be universal across this wave of Legends which is that the paint used on these toys isn't very good. The yellow on Cosmos' shoulders is watery and see through, and the red paint on Cosmos' head is very thin and scratches just by pulling the head up for transformation. It honestly makes me wonder if I should just get the Japanese version when it comes out since that paint is bound to be more durable. 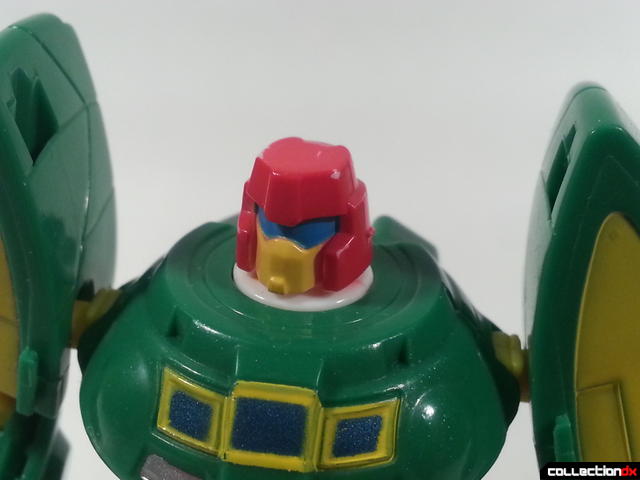 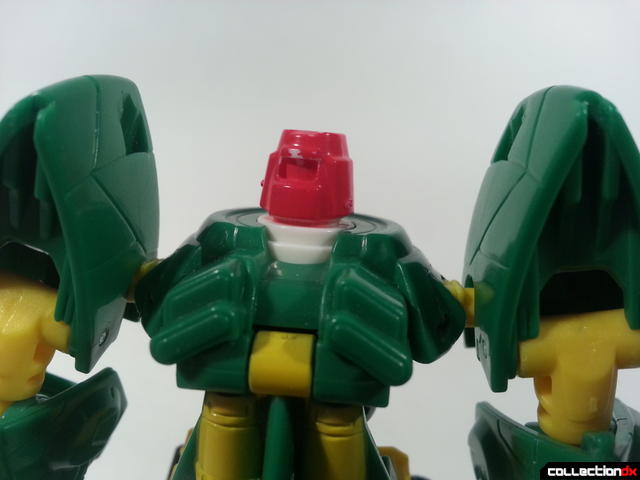 Payload also transforms, although it's pretty simple. You just have to flip up his fins and stand him up. That's it. 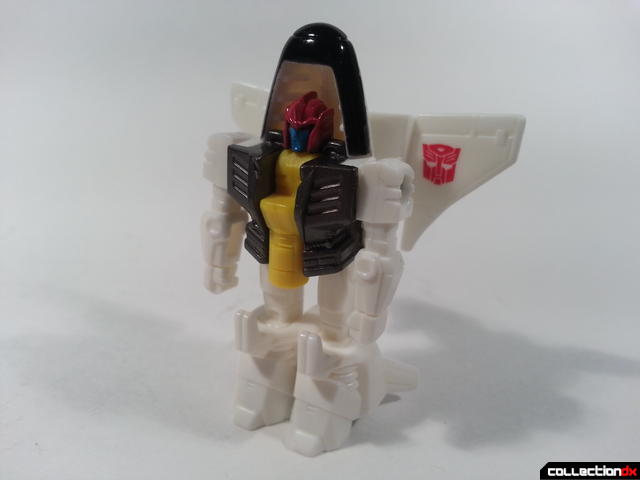 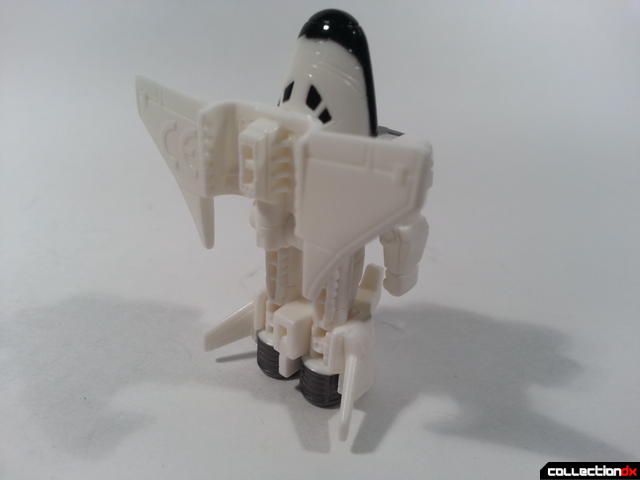 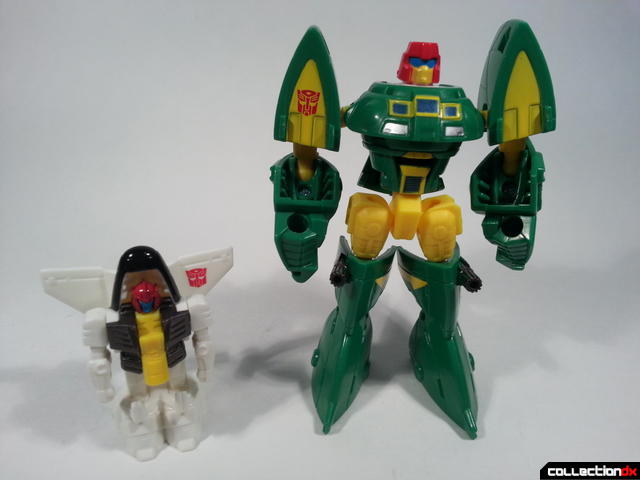 It do love how surprisingly crisp the sculpt on these tiny little guys is. He has a well defined helmet and mouth despite being the size of a bead. 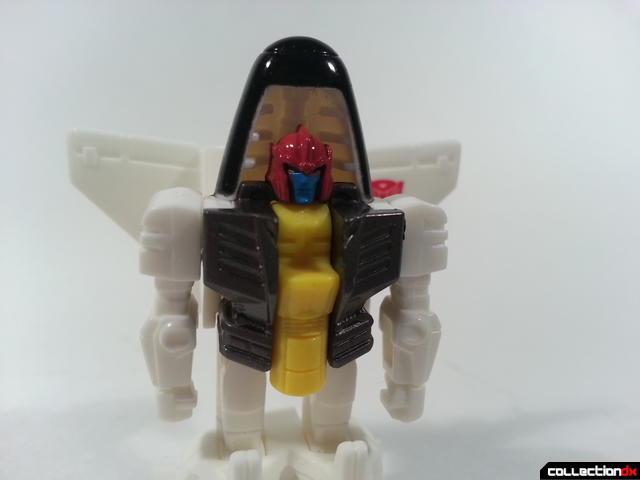 The articulation's pretty basic, with just swivel arms. At this size though, I don't really mind. 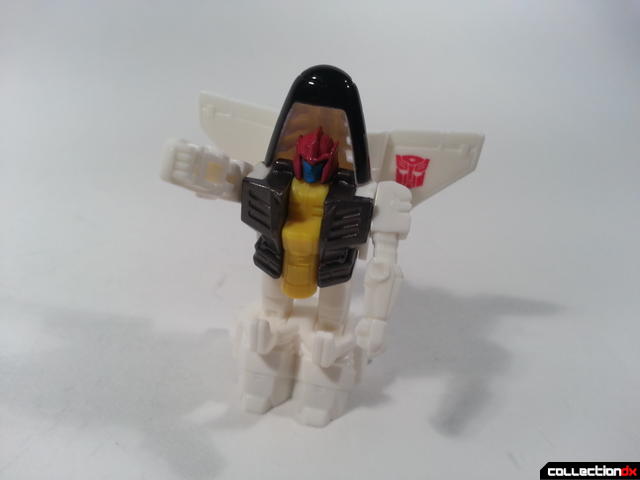 I forgot to mention it, but these partner figures are actually all triple changers since they all have a gun mode as well. Payload's gun mode is actually surprisingly nice. Having additional parts that move for this mode really make it more intricate than some of the previous ones, and it turns into a nice space-boomstick for Cosmos to hold. 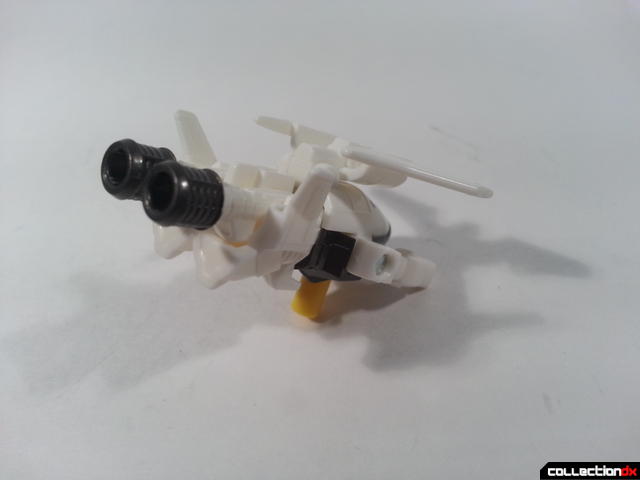 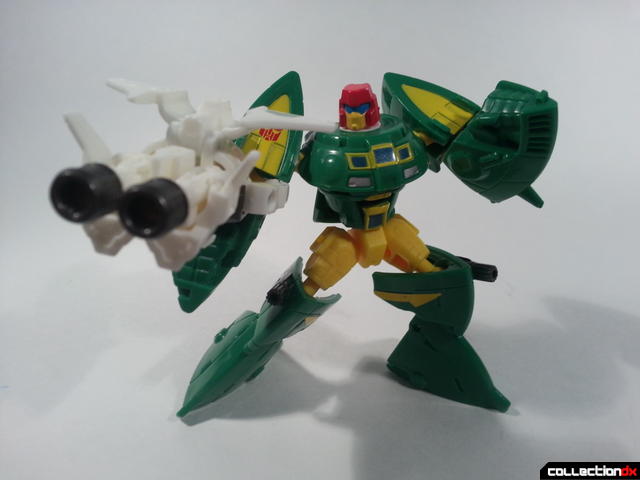 And that's about all there is for Cosmos. He's a simple toy, but a well done one. The transformation is fun and fast, and his partner Cosmos compliments him perfectly. The two match so well, which is something that a lot of these other sets sometimes lack. Starscream, I'm looking at you. 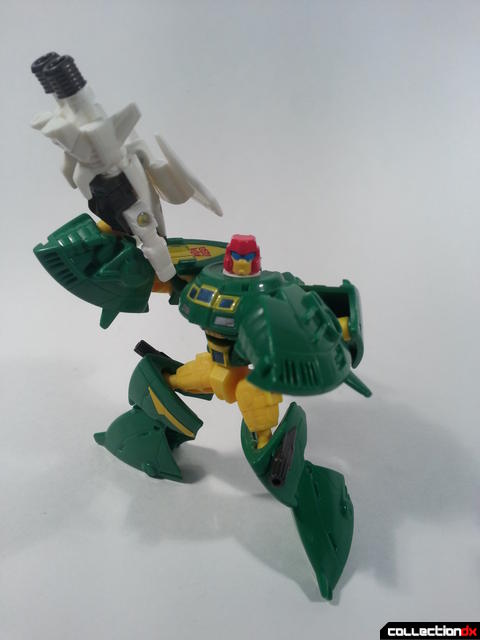 Cosmos sums up just about everything I want from a tiny Transformer toy and if you see him, you owe it to yourself to pick him up. He's a real winner now.

2 comments posted
"if you see him, you owe it

"if you see him, you owe it to yourself to pick him up."

IF we see him... :/ The movie toys have fully moved in to my area with no sign of the new Universe Legends.

At the least in my area, they have still left a peg for these guys and also for the Generations Deluxes. So I don't think that Generations is going to go away during the movie, but instead will just be getting less spotlight. My area actually mostly just restocked a bunch of the first two waves of Optimus, Megatron, and Bumblebee so I'm gonna have to try and wait until those sell out before I see any more of these guys or Tailgate any time soon.