Matt Walker, AKA Dead Pre$idents, is a toy designer and painter from good ol’ Massachusetts.  He started off as a beast of an automotive detailer and pinstriper, and then moved into toy work because of his love for Bullmarks.  His love of kaiju, rayguns, and classic spacemen inspired him to design the Cosmic Squadron, a super fun vinyl toy sculpted and made in Japan! Cosmic Squadron stands around six inches tall and features five points of articulation and a removable clear helmet.  The figure was designed by Dead Pres. with the assistance of toy-maker extraordinaire Matt Doughty.  It was sculpted in Japan by Sunguts Honpo, a maker of all manner of fun kaiju and character figures, and cast in flawless Japanese vinyl. 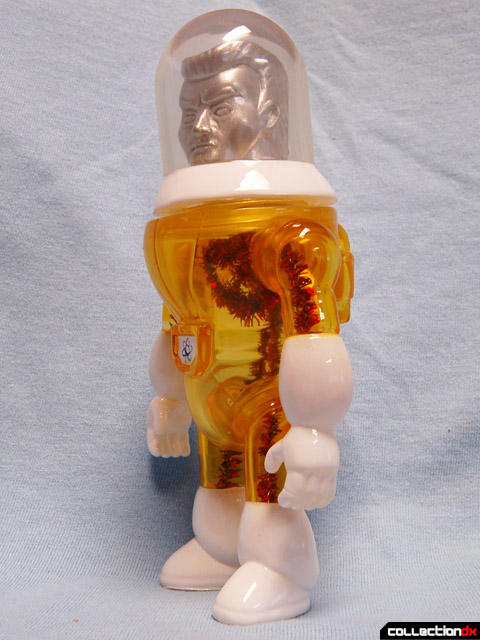 Cosmic Squadron feature sharp details and a fun, funky, and retro shape.  The barrel torso makes these guys look like tough customers, and they have a great feel in your hand. The first round of Cosmic Squadron were all painted on clear vinyl.  This particular version is named Nomad, and is a nod toMicroman/Micronaut Time Travellers.  He’s painted entirely with Monster Kolor, so the colors are vibrant and everything is glossy and smooth.  That also means the paint is virtually indestructible.  Additional cool details include the belt logo and backpack decals, which are actually vinyl stickers applied before the clear coat, so they are seamlessly sealed onto the figure, and really add to the spaceman look.  The pipe cleaners were an addition by me to fill that clear-as-glass vinyl. 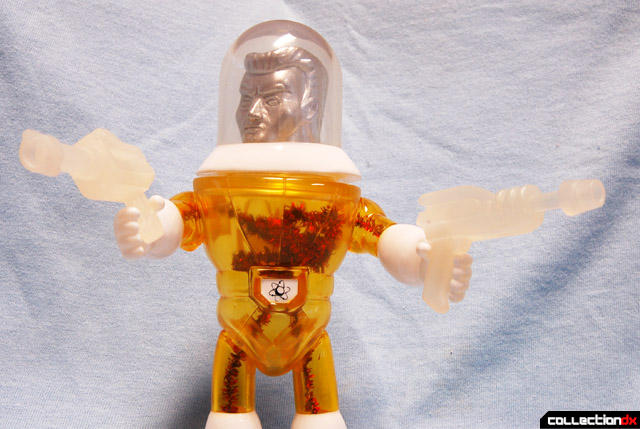 Where would a spaceman be without his trusty raygun?  Dead, that’s where!  Fortunately for the Squadron, Dead Pre$idents designed two different rayguns for his figures, and different releases typically come with one or the other.  The guns are handcast in the USA, and are also flawless.  They are sharp, free of bubbles, and durable.  The two weapons currently available to Squadron members are… 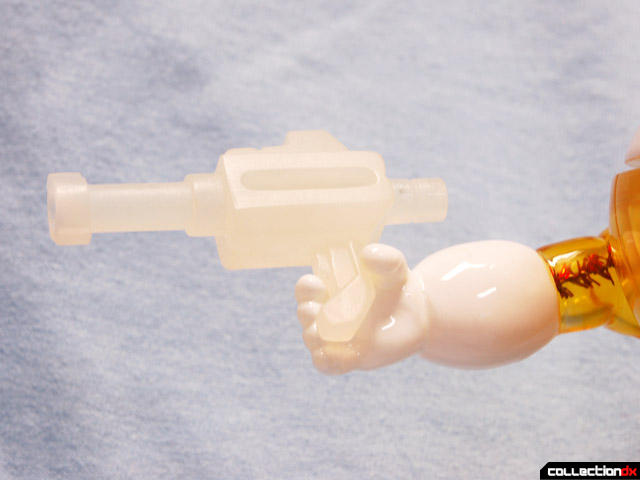 …and the Blaster, which also doubles as a hammer! When the Squadron get into a jam, their weapons can also combine into a Space Cannon! I don’t have a picture of it, but Cosmic Squadron come in vinyl-standard bag and headers, featuring artwork by none other than Mark Nagata! The six inch size of these makes them really good opponents for larger kaiju figures. This is an older photo I took of Nomad having a tussle with a monstrous space kaiju! The clean lines of the Squadron also lend themselves really well to all manner of paint.  These two Kaiju Hunters were part of a custom run Dead Pres. did for a show, and show off how badass the Squadron can look!

You can currently preorder the second production run of Squadron from their website: Cosmic Squadron.  They are affordably priced, made with love, and really fun.