The I.N. Core Series 06 I.N. Corps Specific Wanzer, pronounced “vawn-zer,” comes from Kotobukiya’s five inch line of Front Mission toys released in 1999 to coincide with the release of Front Mission 3. The line was distributed in the U.S. by Diamond Comic Distributors. 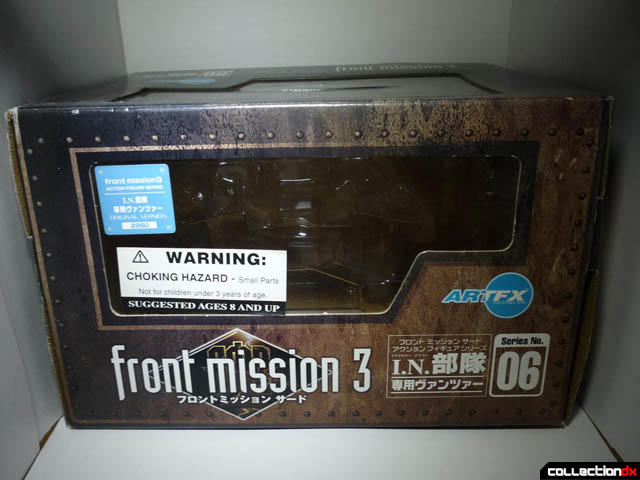 The Wanzer comes in a nice large box with windows on the front, bottom, and sides. Its design is reminiscent of something like a military locker or some industrial container with rivets along the edge and a weathered metal pattern. It really fits the theme of the toy and helps draw you in. 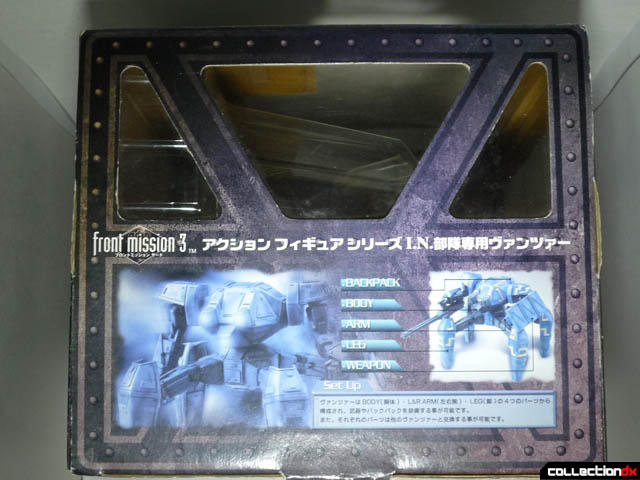 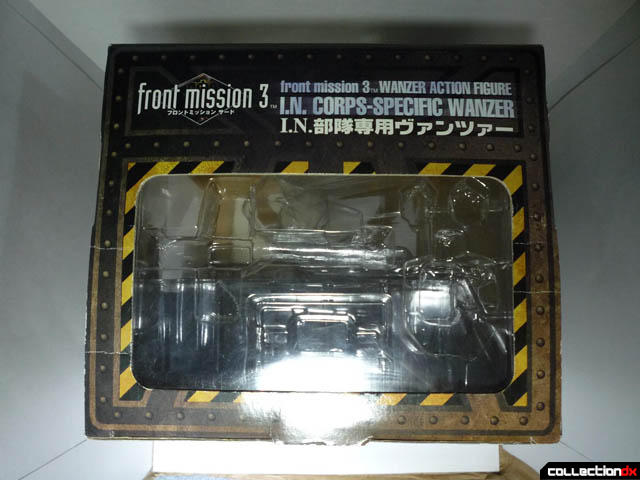 On the back you can see the other toys in the line as well as the offerings in the Final Fantasy VIII Guardian Force series. 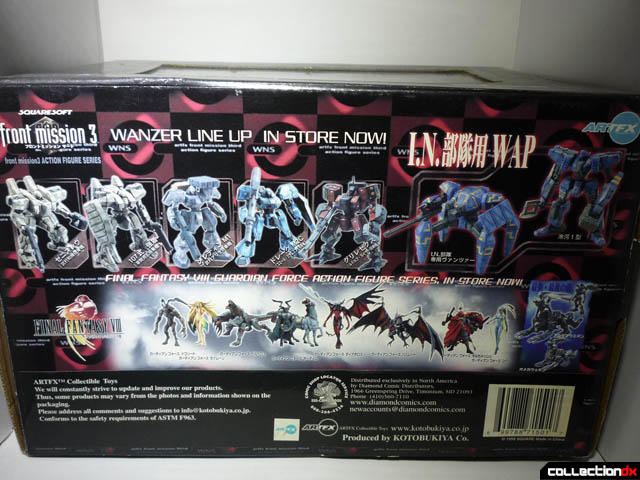 The toys in this line are each about five to six inches tall, which puts them roughly in scale with Square’s recent Play Arts Kai line for Front Mission Evolved in case you want to display them together.

It has a nice blue color scheme with yellow highlights; not exactly combat colors but it keeps it visually interesting. There are details like shading of the armor and hints of rust on the joints that help create the illusion that this unit has seen some use. This particular Wanzer’s most defining feature is its “quad legs” which combined with its combined head/torso give it a crab like appearance. 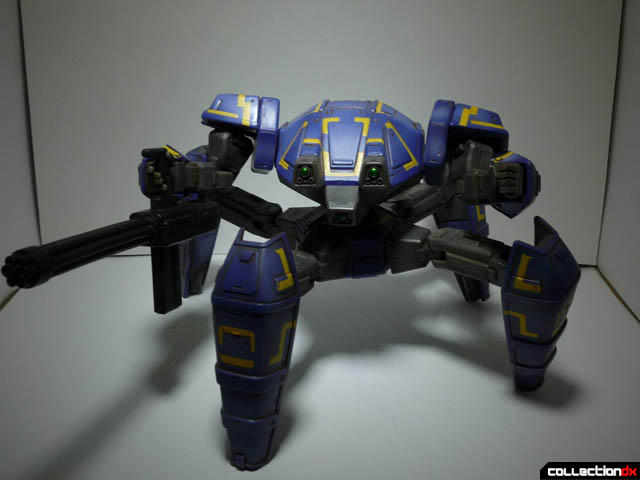 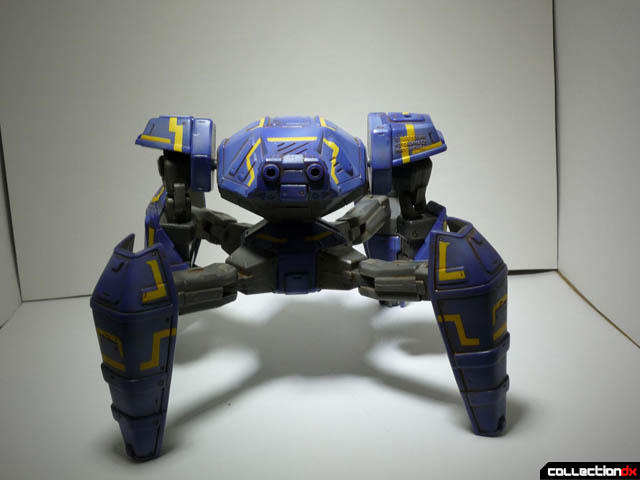 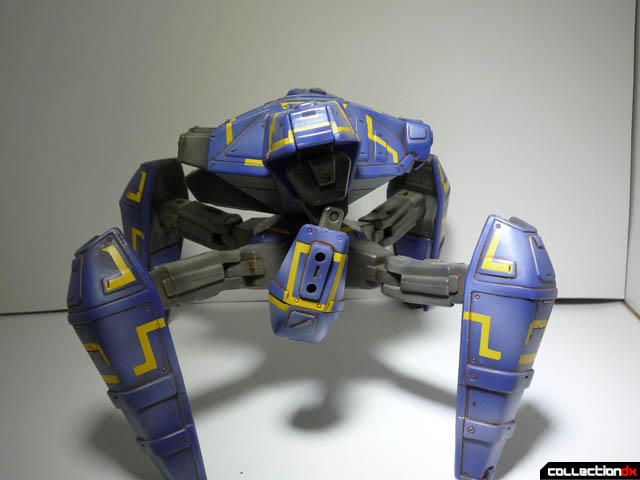 Those legs are pretty posable, too. They can rotate at the waist, bend at a joint near the waist, rotate before the knee, and bend at the knee. It’s fairly easy to balance and you can even pull off some playful poses. 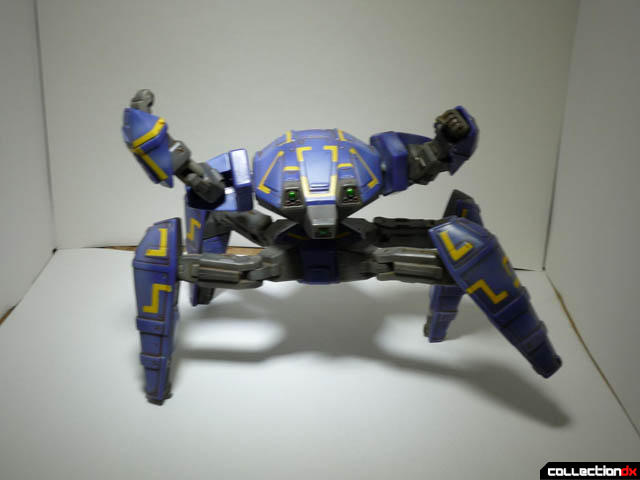 The upper body is nicely articulated as well with a 360 degree swivel at the waist, ball jointed shoulders, arms that can rotate as well as move in and out, bendable elbows, and swivel wrists. Of course, given the design of the lower body, it doesn’t really matter which way the head is facing. 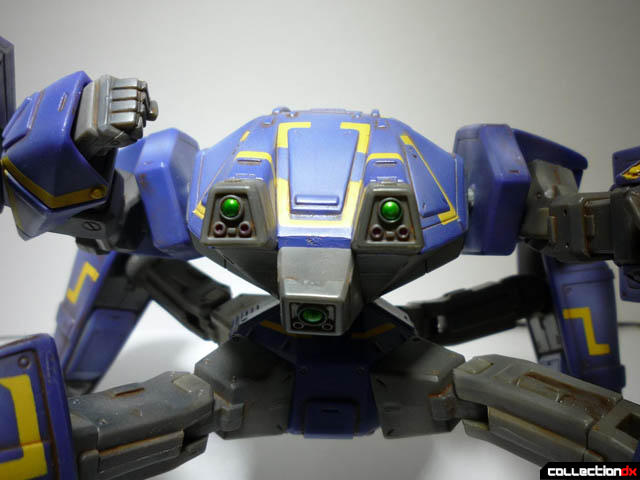 One nifty accessory is a thin cardboard background that lines the inner box. When you remove the toy you can take it out as well and create a hangar aesthetic. It isn’t as good as Kotobukiya’s chain bases, but for a free bonus it’s a welcome addition. Of course, as you can see in the picture, it’s barely big enough to fit the toy so some of the illusion may be lost. 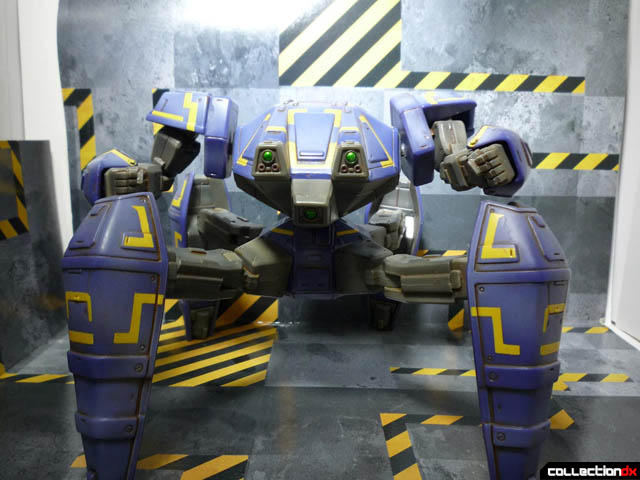 The other accessories are a chain gun, a shield, a pile bunker (a combination shield/spike that is driven into enemy armor by hydraulics), and a set of gun holding hands for each arm. Sadly the pile bunker’s spike doesn’t move, but it still looks really nice.

There are holes on each arm so you can put the shield or pile bunker on whichever one you choose. This reflects the customization in the games themselves in which you decide how to assemble and arm your Wanzers. I don’t have any other toys in the line, but I wouldn’t be surprised if some accessories are interchangeable among the other Wanzers. 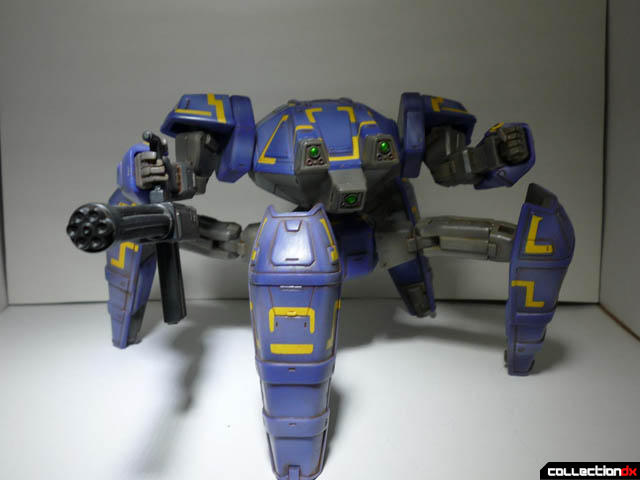 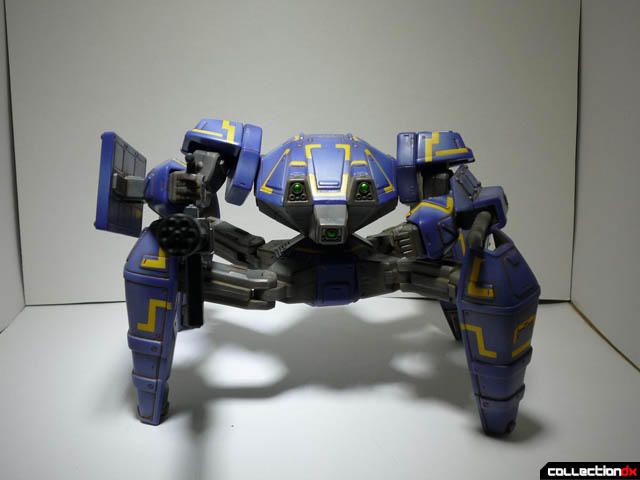 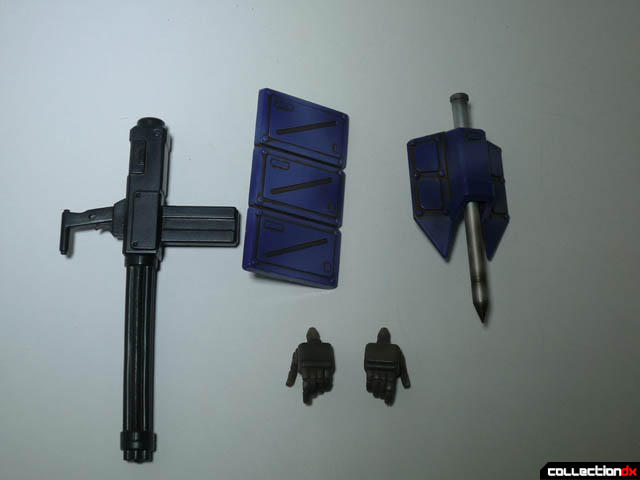 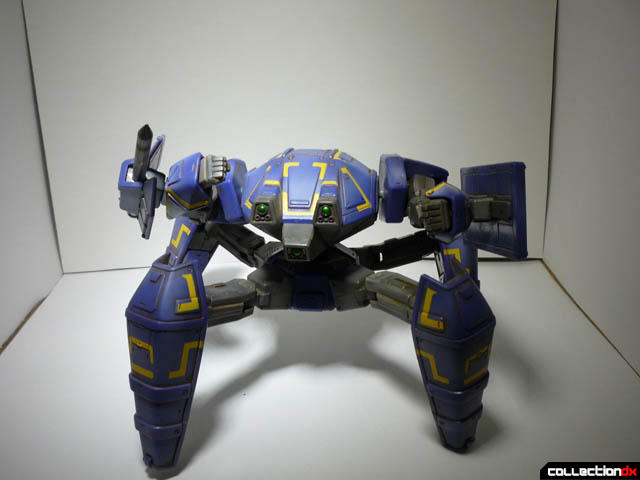 Overall this figure holds up very well for something released twelve years ago. It may not have quite the detail or features that we’ve come to expect from recent Front Mission merchandise like Kotobukiya’s models and Square Enix’s Play Arts Kai line, but its posability and extras, combined with a unique design that takes a refreshing departure from stylized bipedal mechs, make it a worthy addition to any military robot collection.

2 comments posted
I remember having my eye on

I remember having my eye on these back then; never did get one. Reminds me of those Armored Core figures in terms of paint and quality.

"I.N" stands for Imaginary Number, some sort of genetically-enhanced super soldiers that became main villains in the game. This Wanzer actually have a name though, I don't know why they put "Specific Wanzer" as its name. I forgot the name, but it's made by (future) Chinese so it has Chinese name. Maybe Laiying,/Wude/Qibing, I forgot; there are too many of them.
EDIT: I found it. The name is "Shunwang".