Concrete is Toyworld's homage to the classic constructicon Mixmaster. Concrete comes packaged in the same heavy weight cardboard box with foam interior that the rest of the series comes in. Included in the box are Concrete, Concrete's blaster, Constructor's combined mode rifle, and corrected stat cards for all 6 constructor members. 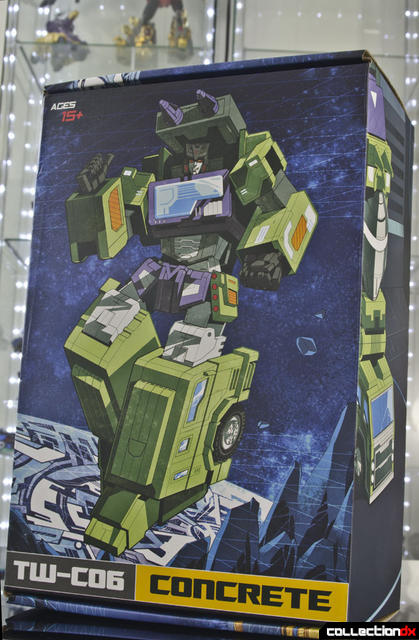 Concrete is loaded with detail, and while he doesn't have an enormous amount of paint apps, the ones he does have do an excellent job of highlighting the detail. I am particularly fond of the grey and yellow paint apps on his arms. 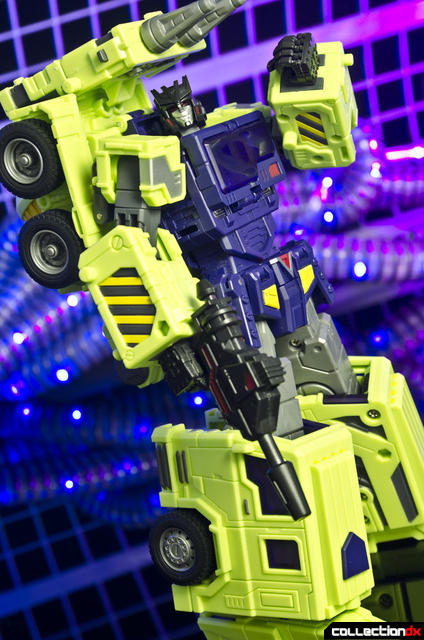 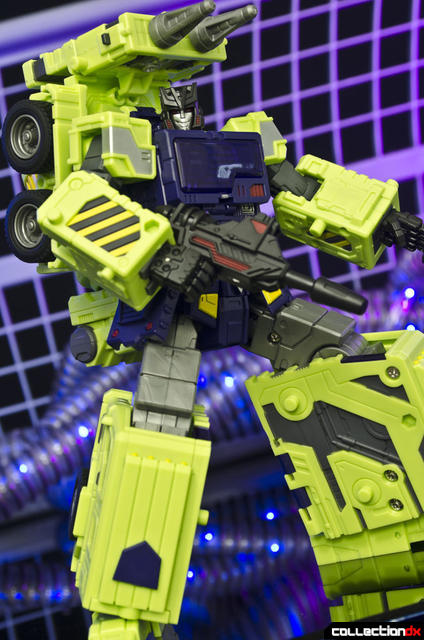 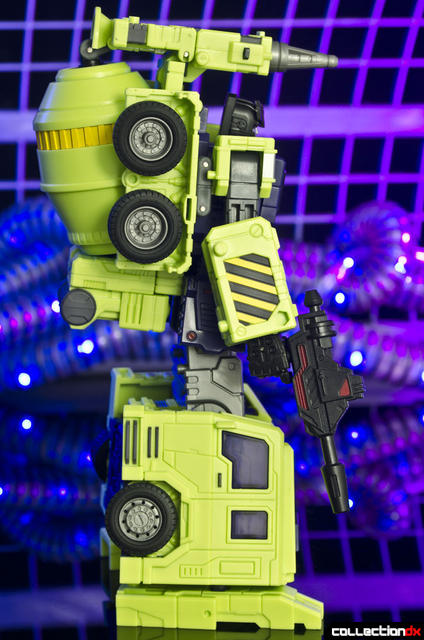 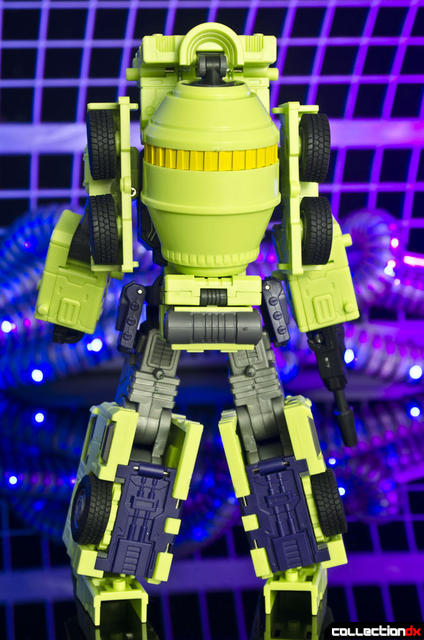 Articulation in robot mode is some what hindered by the bulk of his sculpt (particularly in the legs), but you can still pull off some dynamic poses. 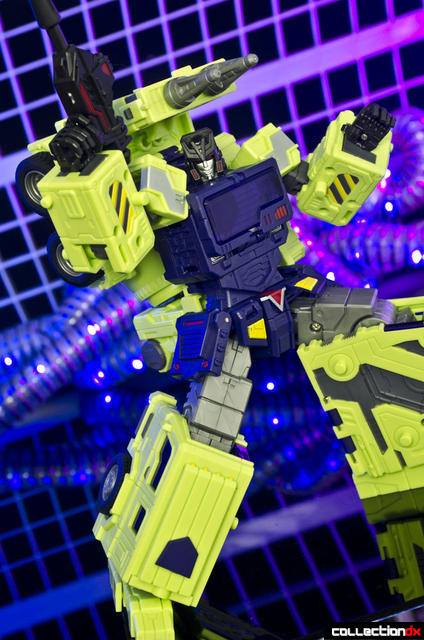 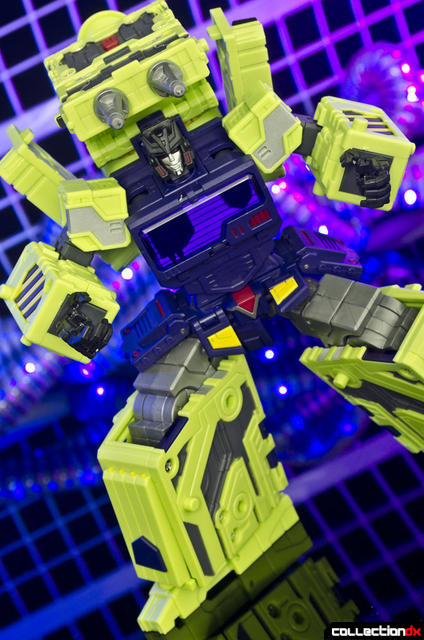 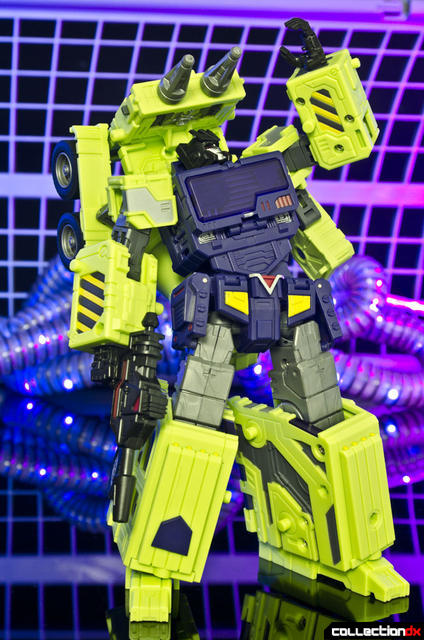 Concrete's shoulder armor is on a swing arm that allows the armor plates to be posed in a variety of ways. 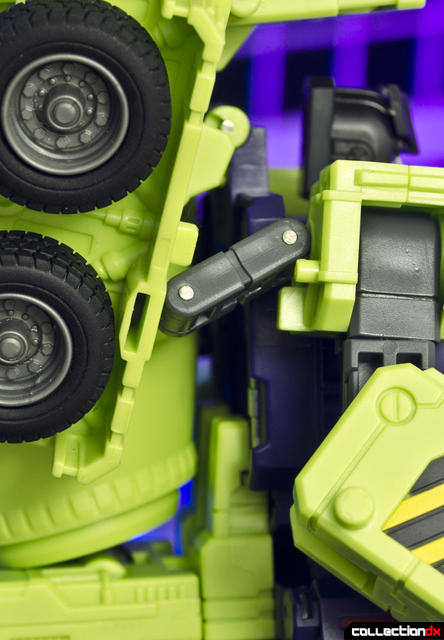 Transformation to alt mode is pretty much the same as every other version of Mixmaster ever, with the legs folding up into the cab, the arms compressing against the body, and the armor panels on the shoulders making up the rear wheels. Two things that this version of Mixmaster has that others don't is a wind up mixing barrel that spins after it has been wound up, and two spring loaded missiles stored in his mixing assembly. 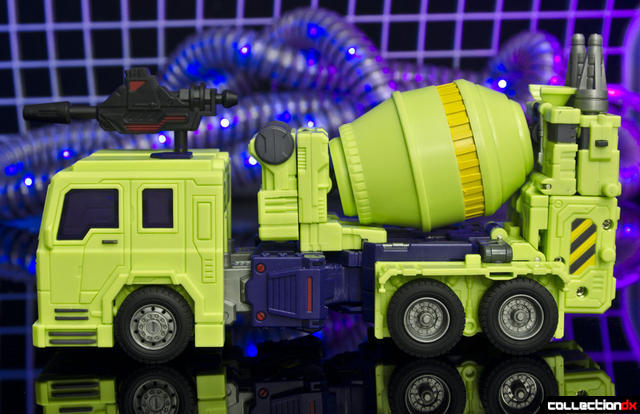 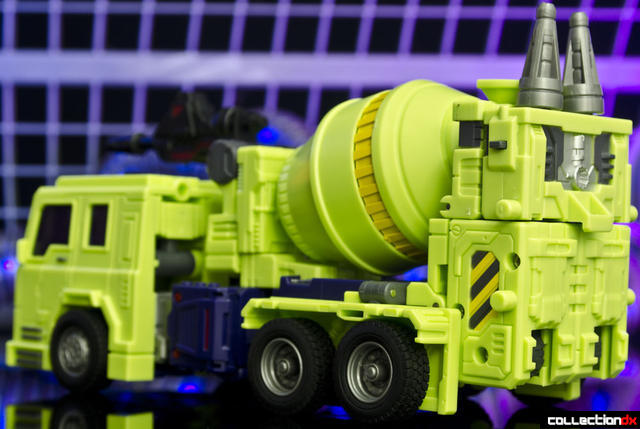 The combined mode gun can be attached to the alt mode two different, and equally awkward ways. 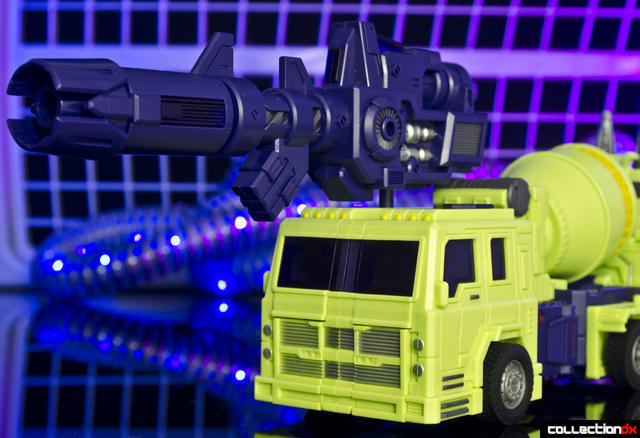 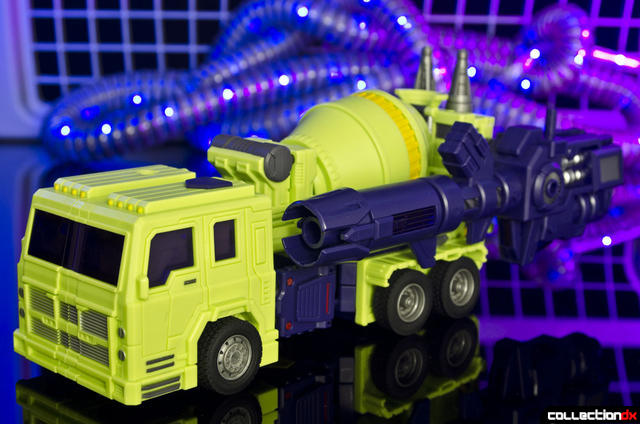 The mixer truck mode is chunky and scales well with the other Toyworld Constructicon alt modes. 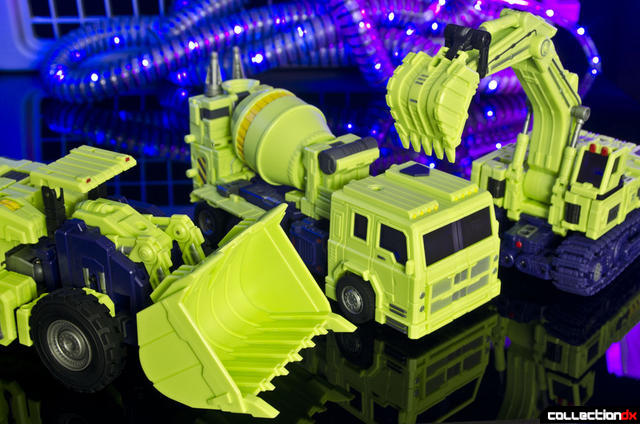 Combined mode is an altered mixer truck mode and only takes a few seconds to change to from alt mode. 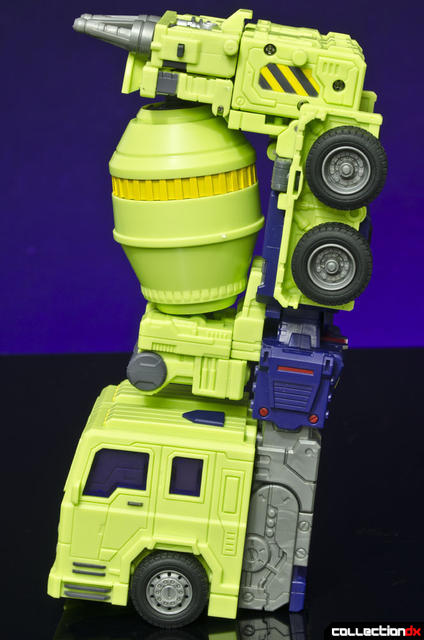 Just as a side note, I love how different the aesthetics of the Toyworld and Generation toys Constructicon teams are. You can have both figures in your collection and not feel like you have two of the same figure. 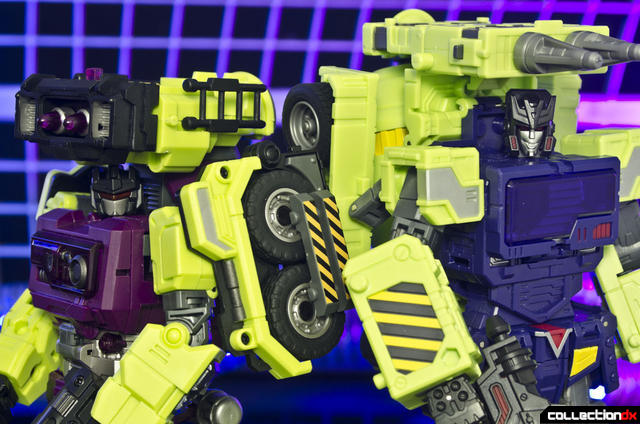 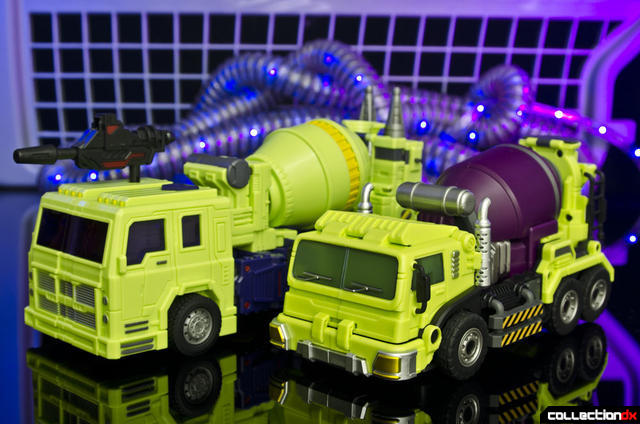 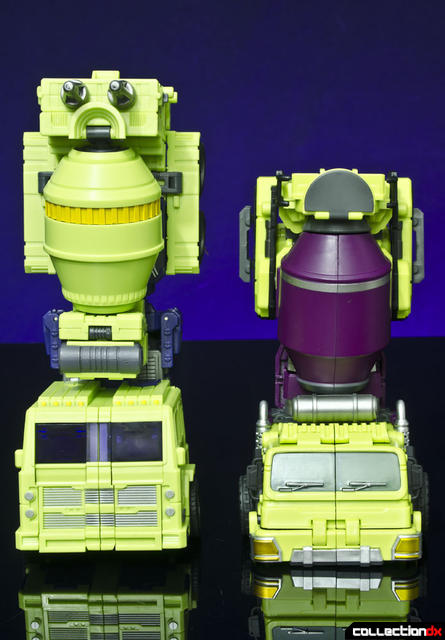 I have a couple of complaints with Concrete. The first being that the socket for his ball jointed thumb was cracked right out of the box, on top of that, the thumb was missing all together. It seems that QC issues are quite a thorn in Toyworld's side for this series with cracked elbow joints on the first two releases being a wide spread issue, and missing parts being common in all 4 releases. Toyworld has vowed to correct the elbow joint issue in a future release, but missing parts and other QC issues will have to be handled with retailers. 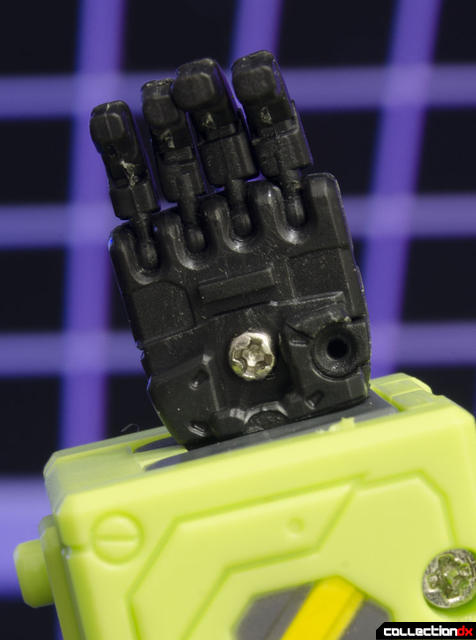 My other two gripes are subjective. I'm not a fan of the face sculpt and I wish the mixing barrel had been molded in purple plastic. 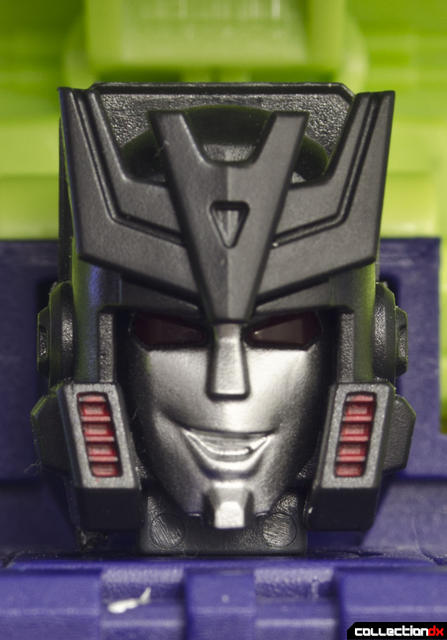 Aside from the defective hand and missing thumb (which the retailer I purchased it from has promised to replace), I really like Concrete. I love his blocky retro look and gimmick packed alt mode. While Concrete is not my favorite release in the Constructor series, he is far from a disappointment. He probably wouldn't make a great standalone purchase like Shovel or Bulldozer would, but if you're already invested in the Constructor series, Concrete won't be a let down. 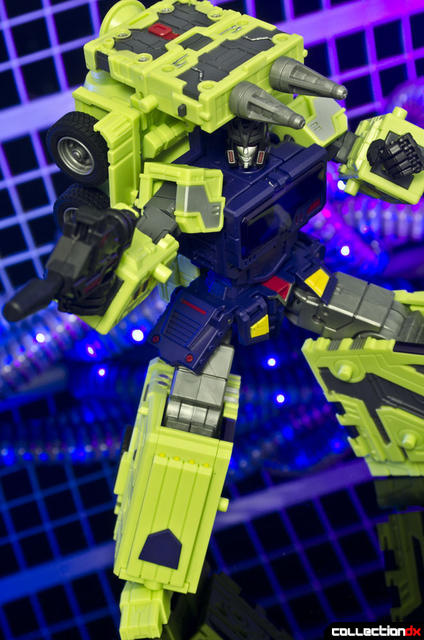 That's not the expression on his face, but I actually watched Heavy Metal War today during my lunch break. In that episode and most of his other appearances, Mixmaster always came off as the most maniacal of the Constructicons, so maybe that's what they tried to capture.

Sucks that they're having QC issues again, but I'm still looking forward to the rest of the series and getting the combined form complete.

I absolutely love the retro G1 aesthetics with these pieces from Toy World. I'm hesitant to purchase at the moment due to the QC issues, but once a 2nd production run is released with the QC issues addressed, I will be excited to purchase the entire set. This is the 3rd party set of Constructicons I've been patiently waiting for. I love the rubber tires on all the alt modes.