Review by PREORDER66.com. Check out more of the great content they post on their site by clicking the link!

Hello, everybody! It’s time for a fresh new take on a 30 year old toy. 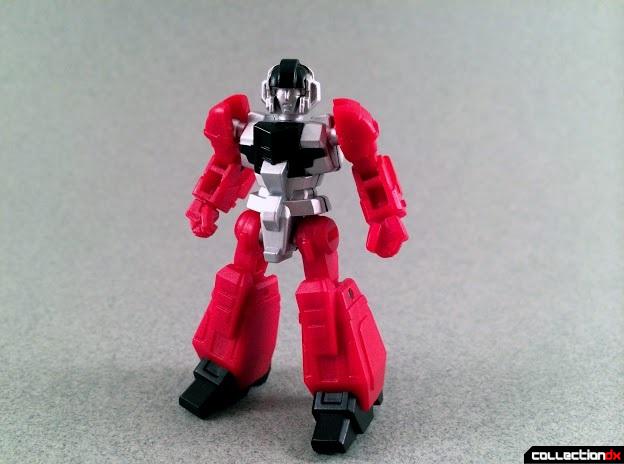 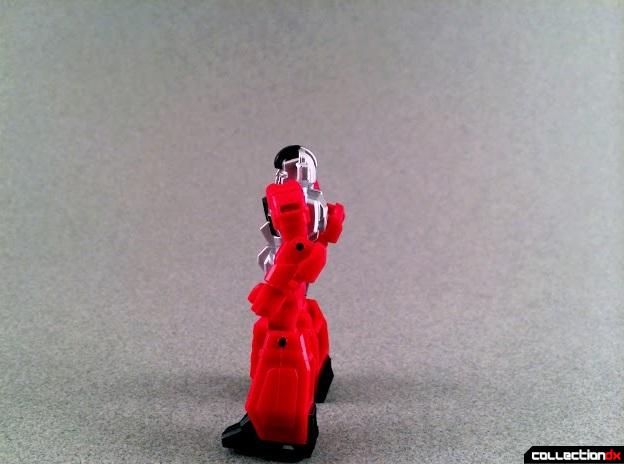 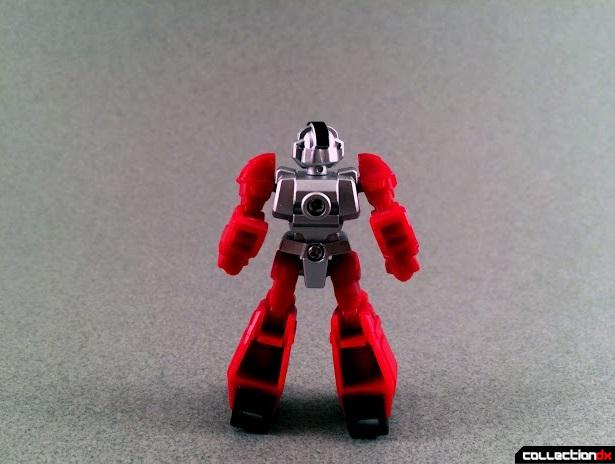 Right out of the gate, you’ll notice an included accessory that makes this exclusive version stand out from the retail release - an awesome Diaclone homage pilot. And he really is a beefed-up version of the old-school drivers - they nailed the sculpt here. It is important to note that the regular version of Columpio will include a little robot that turns into an axe INSTEAD of the Diaclone driver seen here, which sets this exclusive release apart from retail.

For being tiny, Diaclone Guy’s articulation isn’t bad. He’s got simple balls for shoulders and hips, and hinges for the elbows and knees. These both have limited range, but he can still strike a good pose. Also, his neck is articulated, but it is so tight that I’m scared to move it.

In continuing to pay homage to Diaclone, he has nice, strong magnets under his feet. This serves no purpose with this toy - it’s just meant to pay tribute to the old figures. The representative from FansProject and MakeToys I spoke to at the convention did mention possible plans to try and utilize those magnets in the future. Take that with a grain of salt, though. 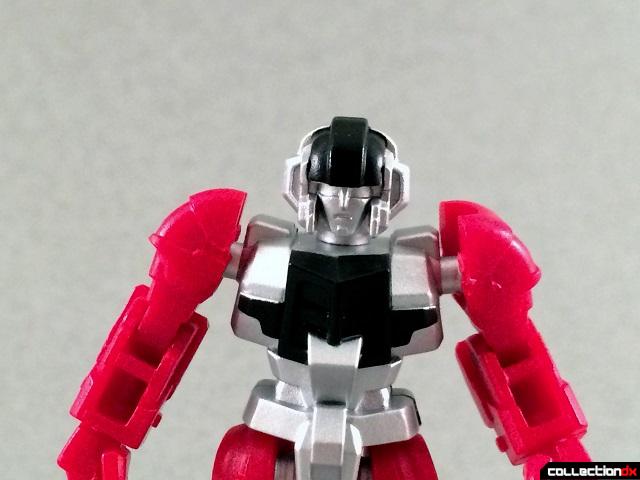 Look at that face, though! He’s all tiny and surly. It looks great, especially because it’s so small. I love that tiny little frown. I just wanna get this guy a cookie to cheer him up. 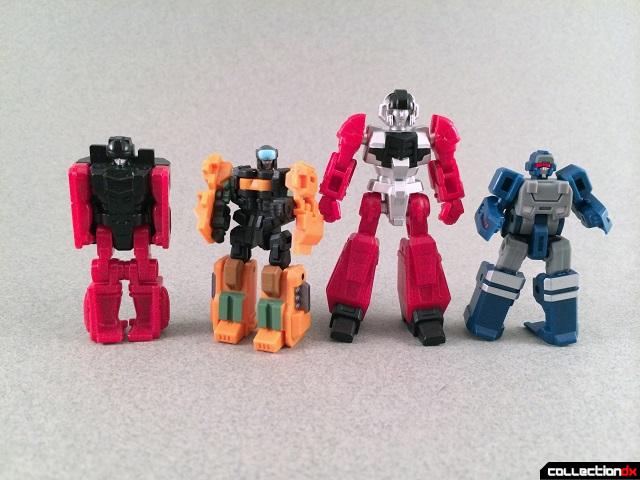 Here he is next to some of his other little friends. He is way taller than Head/Powermasters. He is like a giant to them, made of beef. I really like this guy - he has such good, sharp lines to his sculpt, and simple, yet effective colors. I do hope they continue on with this Diaclone inspired version of the line. 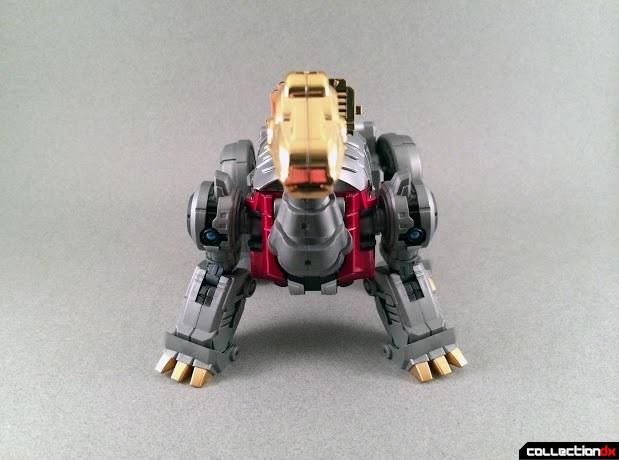 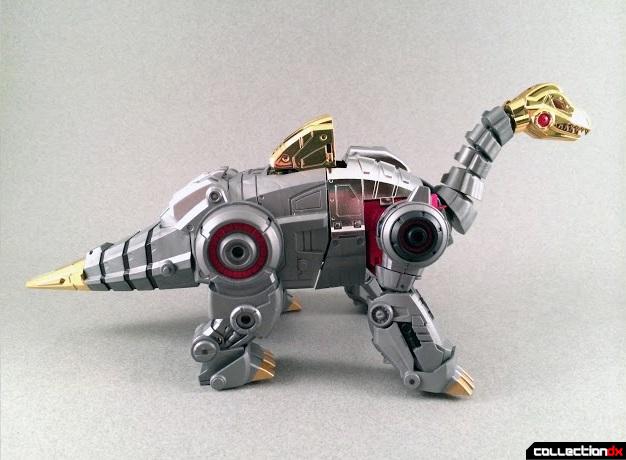 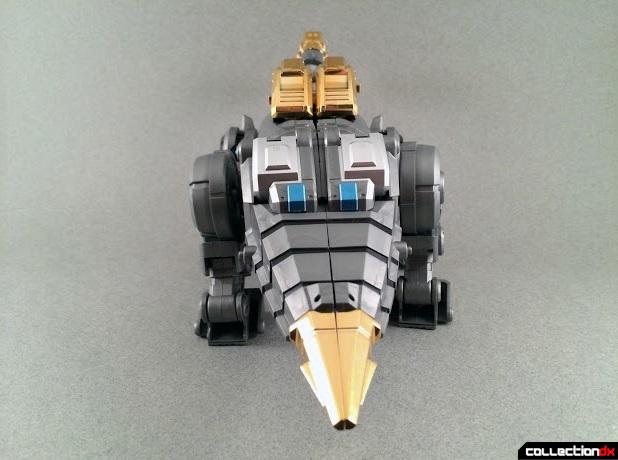 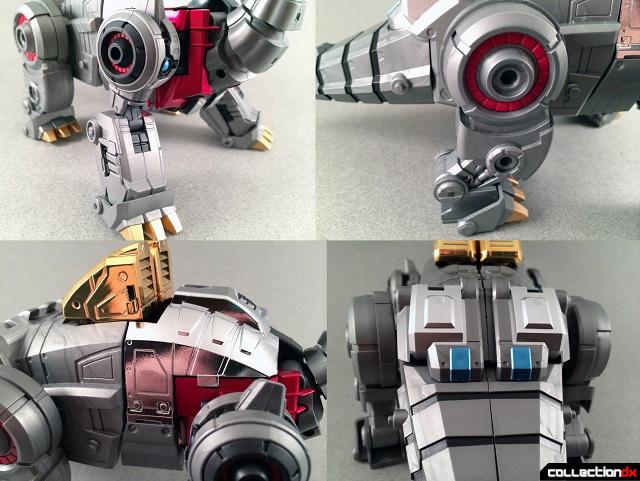 Onto the main course of this prehistoric meal - the Apatosaurus known as Columpio! Just look at this glorious robotic dinosaur.

I love dinosaurs and I love robots. So yes, I freakin’ LOVE the Dinobots. This guy just oozes the reasons why I love them - from the curvature of the back and neck to the hard robotic detail he is covered in.  There are also those hard edges that give hints to something more. The back vents are striking in beautiful, gold chrome, offsetting the silver chrome his upper torso is cast in. These details, combined with the head, immediately convey that this is the Diaclone version, meant to evoke memories of the original 80’s toy. This guy nails it. Yes, he could have had a gold chrome neck and clear head, but c’mon, that would be tacky.

Speaking of the gold chrome head, just look at this thing. A moveable jaw filled with sharp teeth? Those ruby red eyes and cheek jewel? This guy is expressive and emotive. And his teeth are very sharp for a plant eater...but he is a giant robot Dino, so I digress.

So can this Apatosaurus move? Of course he can! The front and hind legs are both fully articulated, along with the neck of the beast. He can’t do much pose-wise, because the tail is one giant wedge, but he can get a tad expressive.

His neck is crazy articulated. Made up of six segments, all connected by big balljoints, it can get very expressive. It helps his Dino mode poses very well, and the joints are all tight enough to hold whatever pose you put them in.

Those vents I mentioned earlier move and swing around to clip together, exposing a hole in his back.

The hole is a seat for the Diaclone driver, so he has a giant robotic chariot to ride into battle. Or something. This is a neat feature, and makes me think back to Dino-Riders. What a ridiculous toyline. 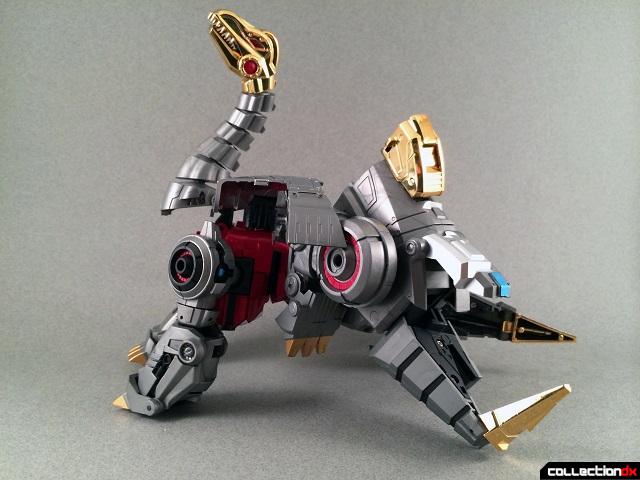 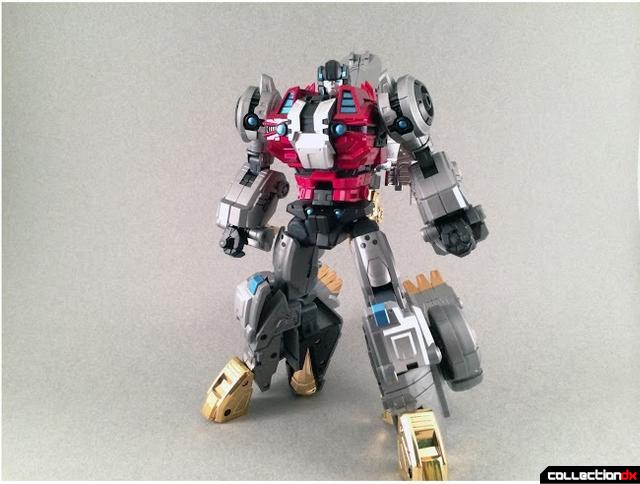 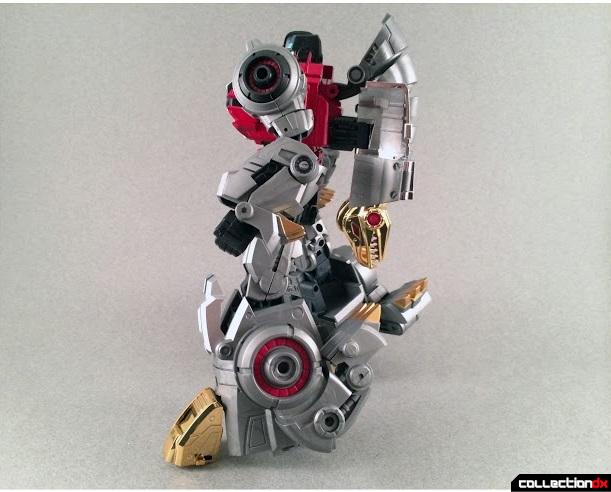 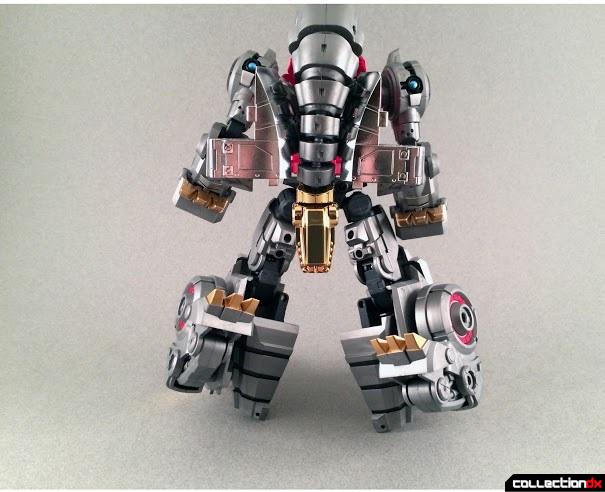 Look at that kickass robot mode. All big and beefy and sleek and made up of dino parts. Man, this guy just looks powerful. And he should, too. The transformation is fairly simple for the top half, but the bottom half gets a bit complicated. The tail and back section unfold, then the tail swings outward and inward and folds into the leg. If you have Masterpiece Grimlock, think of that, but a bit more complicated. Overall, it is a slightly complex but very fun and satisfying transformation. 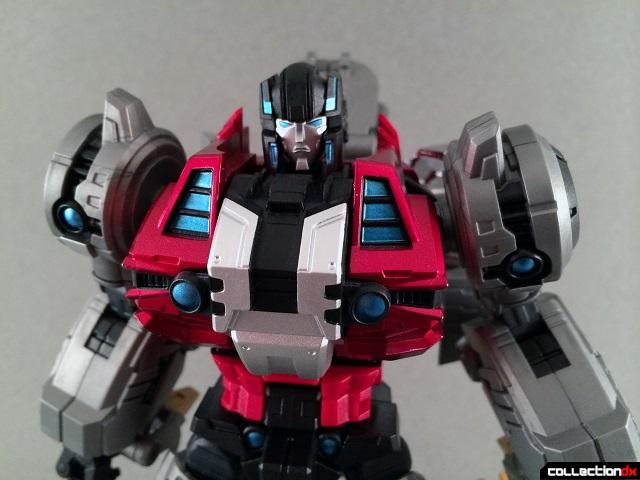 DAT HEADSCULPT. I LOVE IT. His gorgeous headsculpt with that grimace. He has the Dredd scowl. The chest is sculpted amazingly as well, with a gorgeous, deep, candy red paint job.  Honestly, I don’t know how the rest of the Prehistoric Squad’s headsculpts will match up. It’s just so good. 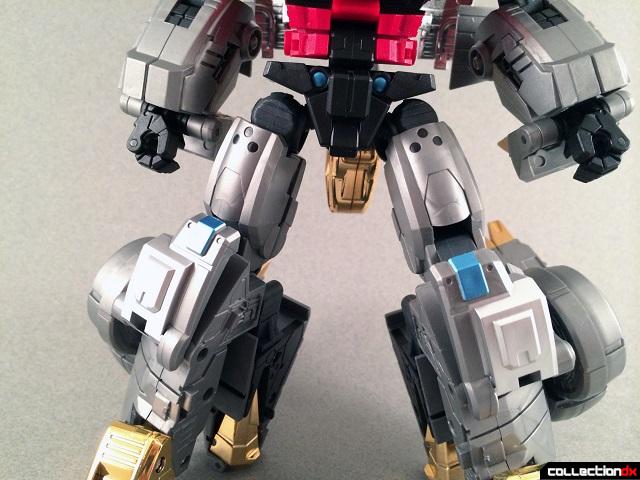 The lower half gets a bit more exposed detail, mainly in the Patlabor-style leg holes, which look great. 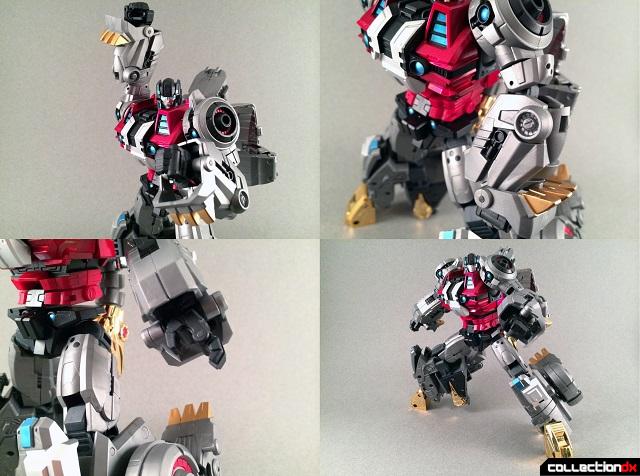 His articulation is pretty surprising. The arms--on GIANT shoulder ball joints--are the same as the ones in Dino mode.  And since they are uninhibited, they offer a full range of motion. The elbows are a double joint, and it helps greatly in the range of motion. Sadly, the wrists do not rotate, and if it weren’t for a killer bicep swivel, this would greatly detract from my enjoyment of him. It is still a bummer, and still restrictive, but it could’ve been worse. The hands do open and close, on a very tight pin connection. The hips on mine are a tad loose, and can get annoying, but it’s nothing floor polish won’t fix. The knees have a good ratchet joint, and he never feels like he will buckle there. The feet are on a ball, so they can move to give the illusion of an ankle joint, but he does not have one outright.

The chest has a good lower ab crunch, and a nice swivel at the waist, giving him some great posing options.

The weapons are two big hunks of plastic.  The gun has a retractable bayonet, and the sword is a lovely red translucent plastic. Both feel very solid, and he can hold them up with no problems. As I mentioned earlier, the regular release will have a little dude who turns into an axe...no idea how that will fit into his hands yet. 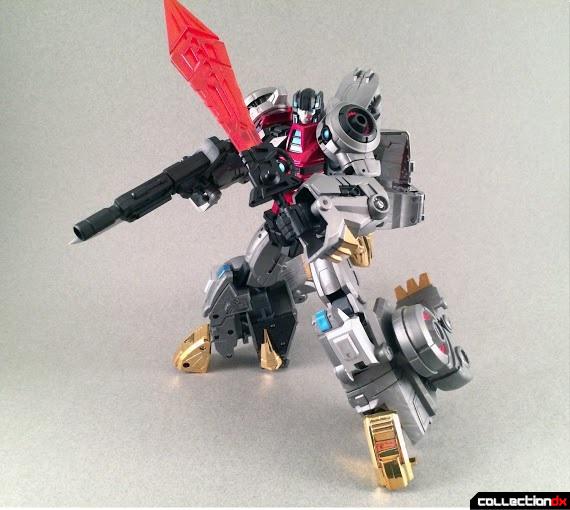 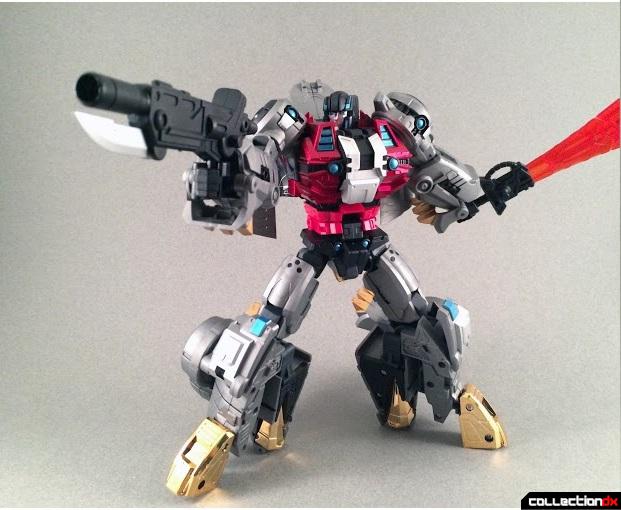 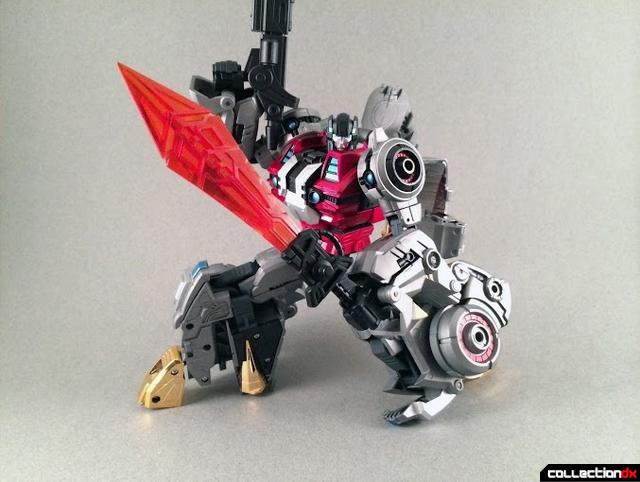 So, with all those joints, this dino can get into some great poses. He is pretty fun to just mess around with and get into a battle stance. The gun doesn’t like to sit in his hand, though, and I think part of that is the design of the handle. Instead of a straight peg, like the sword, it is an oval-shaped thing. It likes to swing around in the hand. A weird oversight for FansProject.

He can interact with the Diaclone driver, but only superficially. There is no real use I have found for him in this mode.

The weapons have storage in the back wings, but I think they both look a bit dumb just hanging out there, especially the sword. That looks just…really, really dumb. 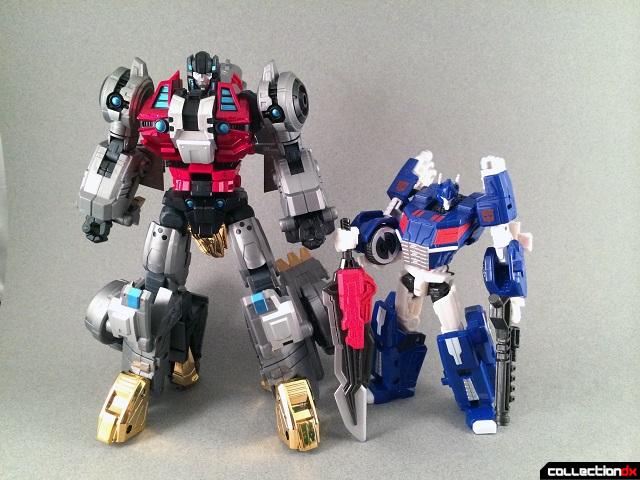 As far as scale goes, he is clearly meant to fit in more with your Classics line of toys. Yes, this Prime/Magnus mold is small, but he still fits in better here than with, lets say, Masterpiece. 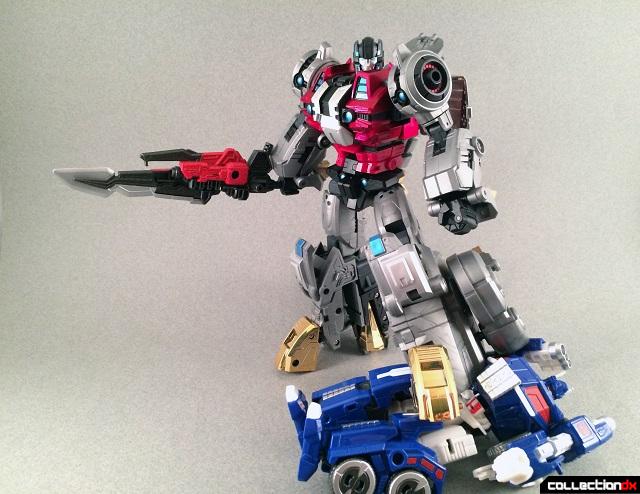 Speaking of mainline Transformers, he can hold a weapon in the standard peg size they come with, as long as the handle is long enough. 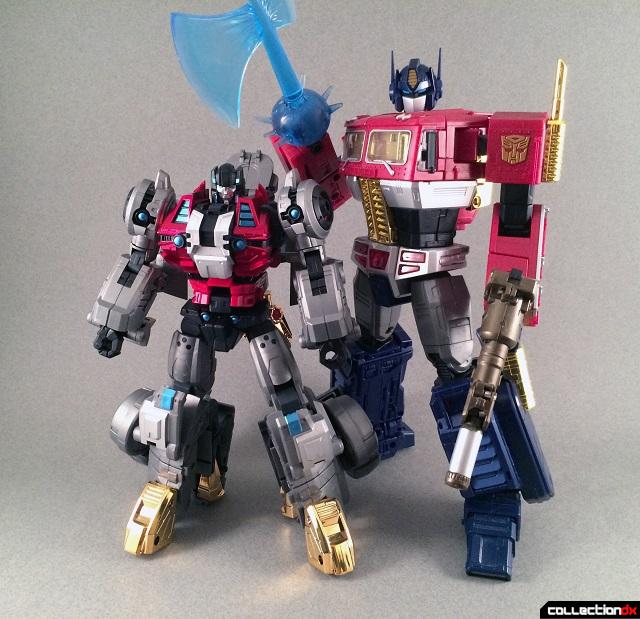 Yeah, if you care about scale, this guy really isn’t going to work with your Masterpiece stuff. He’s just too small, even though he’s a huge toy. Plus, there are, like, 80 companies working on MP Dinobots, so go nuts, guys. 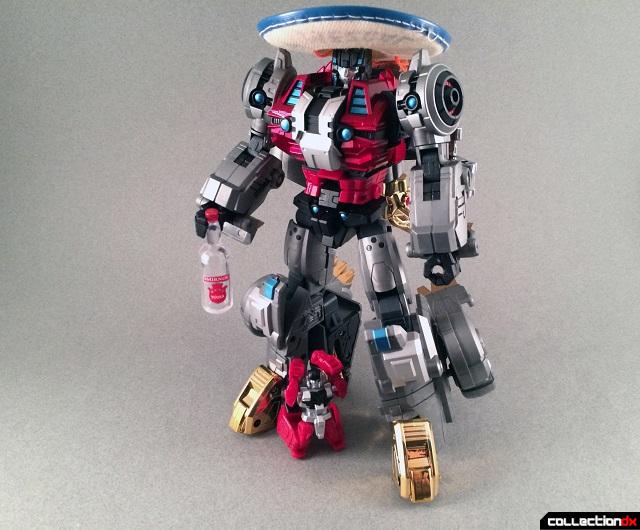 Columpio here is something special to me. The unofficial Dinobots were announced just days before TFCon, and then at the con we got this exclusive version. It was exciting. I love the Dinobots and I always have. This guy really captures that “Updated G1 toy” feel the Classics/Generations line has been aiming for. This version, with the chrome, metallic red and Diaclone driver, was a con exclusive, and made available only on few online shops post-con for a markup. Rumors abound that he might be at TFCon Chicago in October 2014, but don’t quote me on that - I have no idea.  But I do suggest at least picking up his normal retail release, which comes with Drepan the Axe man. Columpio is a really fun release that hits the good mix of complicated and simple FansProject transformations. Plus, they did “Sludge” first - the one EVERYBODY IGNORES.

Thanks to CollectionDX for hosting this review. If you’d like to see more of what I do, head over to PREORDER66.com and check out my other reviews, as well as musings from my fellow podcast hosts. We cover a wide gamut of topics in pop culture, from toys to movies to comics, all with a lighthearted slant. Hell, give an episode of the show a listen if you like fun. Or don’t, I’m not your boss.

Great review, solid shots, couple of things. I bought 2 of these I was that excited about them. First of all I love diaclone figures I think they absolutely make transformers make sense. The fact that FP updated them 30 years later made my head explode. I love this new little guy. I also love Sludge always my favorite G1 Dinbot, I also love FP and Maketoys. All that being said Columpio is an epic disappointment. He looks great but feels like a cheap piece of plastic. The hip joints on mine are also cheap and loose. This is a $100 dollar retail figure with zero metal let's be honest I should NOT need floor polish FP get your shit together. (I am being kind this is a $200 figure if you weren't at SDCC) I would not recommend this guy and plan on checking out Toyworld's offering for Dinobots instead. For one chrome is standard on theirs not "exclusive" and I can only hope the plastic quality is better. When you read things like "ratchet joints" you think "Oh, ratchet joints quality" think again a ratchet joint on cheap plastic still sucks. I know I have a reputation for getting heated about things but I am trying help. If you are considering this toy the figure is light, lose and not worth what they are asking. My opinion but as Morrissey says "why don't you find out for yourself." Yup quoted Morrissey.

That was a nice review and I can tell how much you love the robot. Do you how it compares to the quality of FansToys Scoria? The FansProject NOT Dinobots looks a little small and simple Vs. FansToys', but that little piot guy is a cool adder. Thank you.

I have Scoria it's extremely high quality and considerably larger than Columpio. It's meant to scale with MP-10. Bigger than MP-10. I would highly recommend it. It's actually better quality than Takara MP-10 and more diecast.