In the annals of unloved eighties properties, Bravestarr is unique in its demented lameness. Futuristic science fiction was clumsily cross-bred with the myths of the American wild west into a psychedelic fever-dream.

Bravestarr followed the exploits of its titular hero, Native American Space Marshall Bravestarr, who derived supernatural powers from his spirit animals. His horse transformed into a giant horse-man to fight alongside him. Bravestarr’s milieu, a space colony called New Texas, was populated by robots, aliens, and prairie dog people.

The cartoon was just okay, typically lackluster Filmation fare, but the toys were terrific. Mattel (bafflingly) spared no expense. The figures and accessories were of unusually high quality, with rich and inventive layers of sculpted detail. But the secret sauce was the lunacy. Case in point, the first, and to my knowledge, only Civil War-themed transformer, Col. Borobot.

The Colonel was packaged in a lush, beautifully illustrated foil-stamped box.. Sadly, this specimen is rough. You can still discern the exceptional artwork, though. 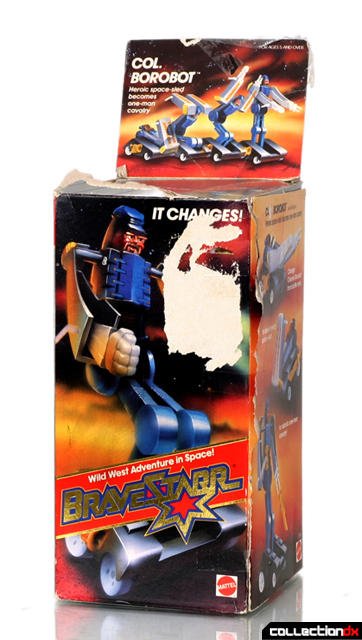 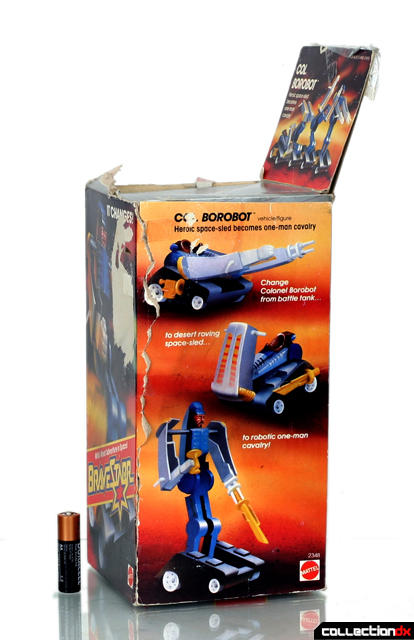 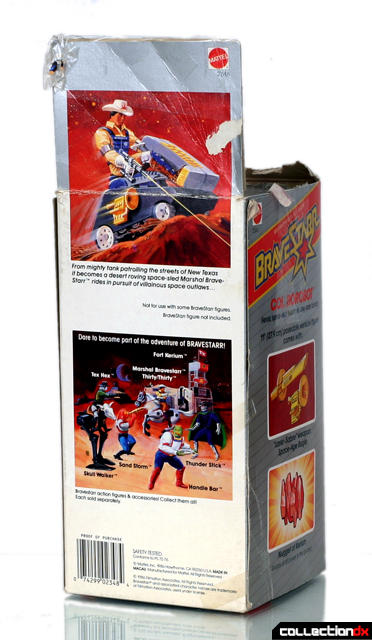 Inside: a spare cardboard sleeve, the toy itself, a decal sheet, instructions, weapons, and a nugget of Kerium (basically Energon for the Bravestarr universe). 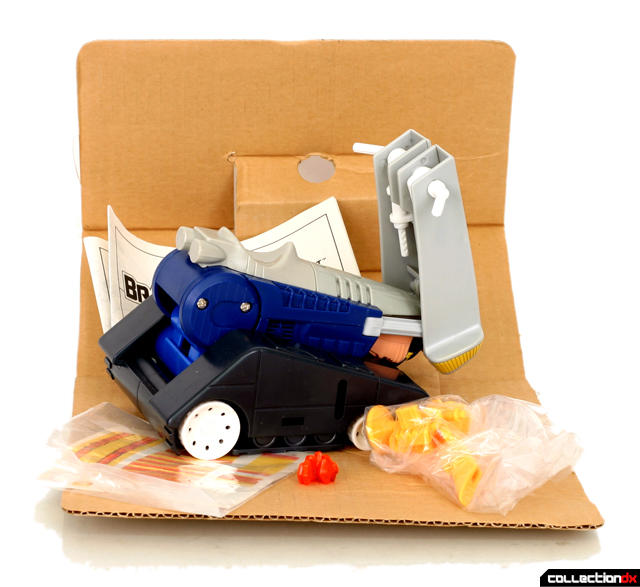 Borobot is a slightly modified version of an un-produced Big Jim vehicle, the Robo Scooter. Big Jim was similar to early G.I.Joe, a largish action figure line which inhabited many genres. Big Jim made a stab at early-eighties relevance with its Space series, but sadly folded before the Robo Scooter could be released.

Luckily the piece was resurrected for the Bravestarr line.

The scooter is an anonymous, vaguely futuristic design. The accessories clip smartly onto the sides. Once you’ve transformed it, though, it’s hard to get past the fact that this mode is essentially a man bending over. 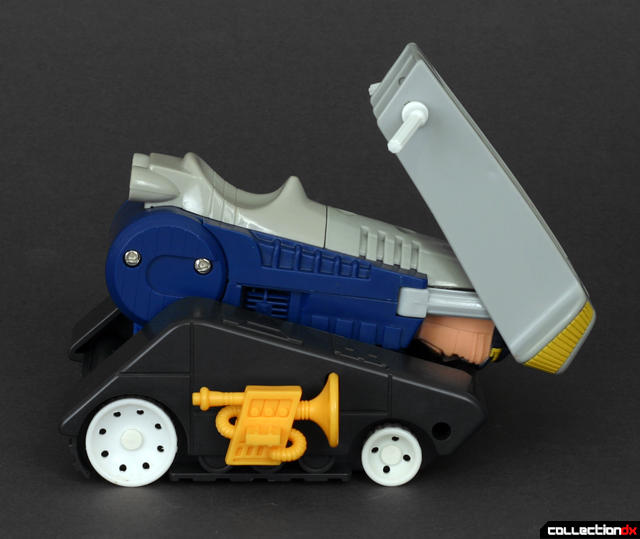 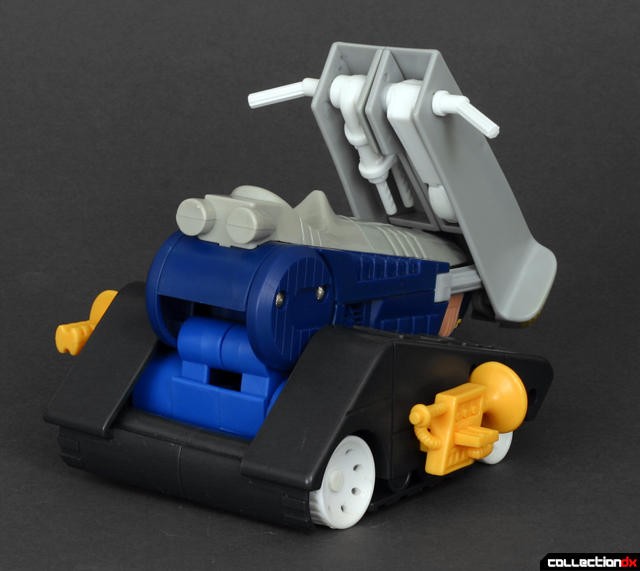 While Borobot is a tool of our hero, Space Marshal Bravestarr, he’s shown here mounted by villain Tex Hex. 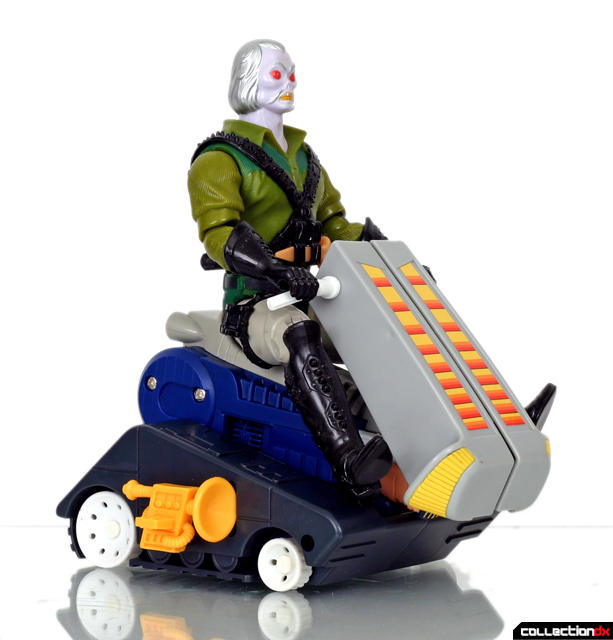 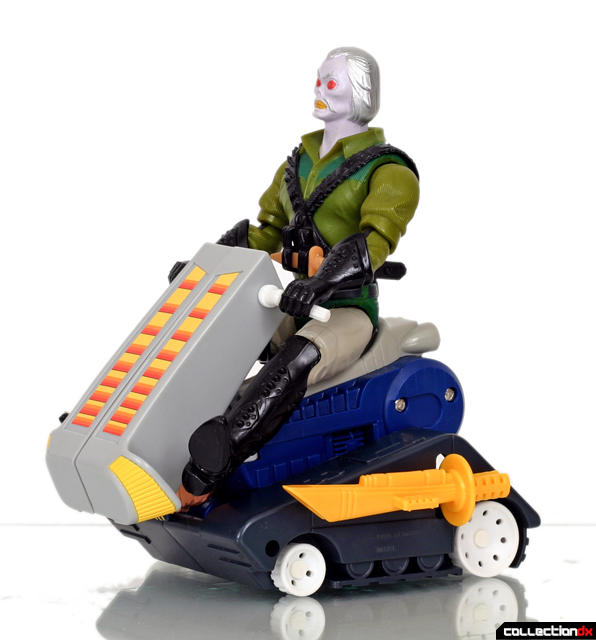 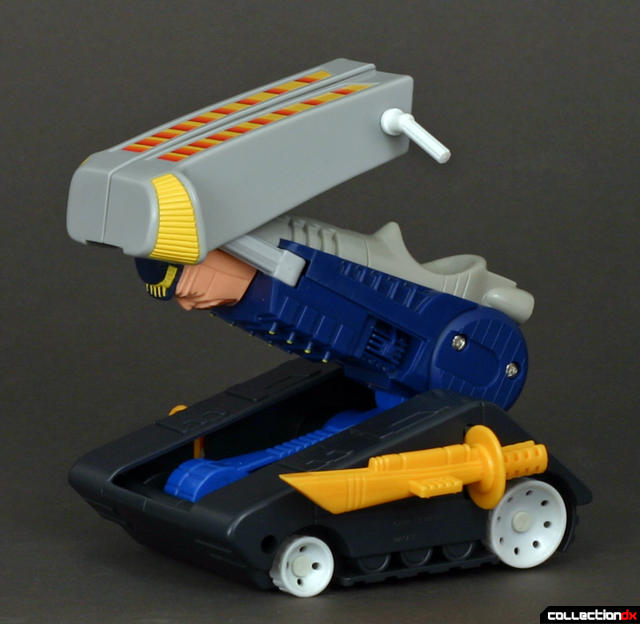 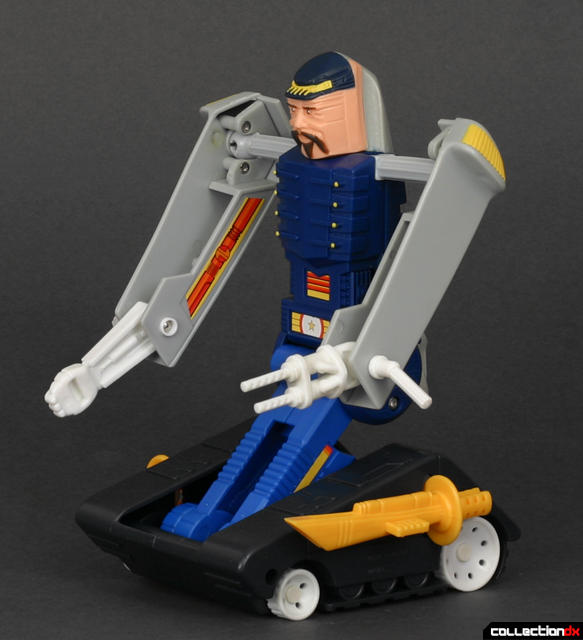 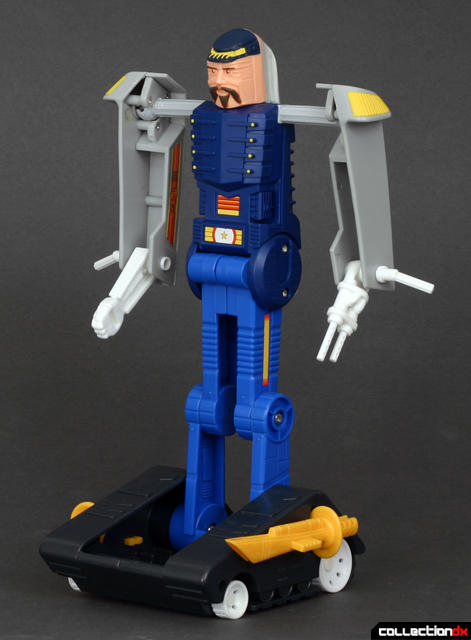 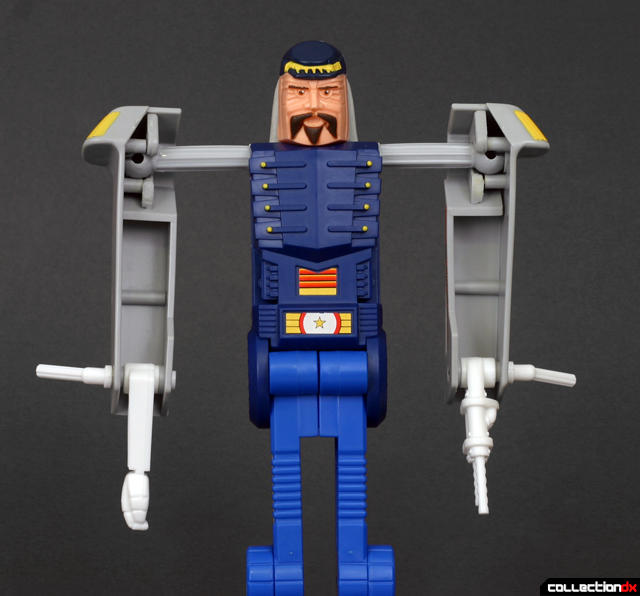 The flesh colored man-head really gets me. It’s the only thing overtly man-like about the figure, and it just seizes your awareness. I think he kind of looks like James Lipton. 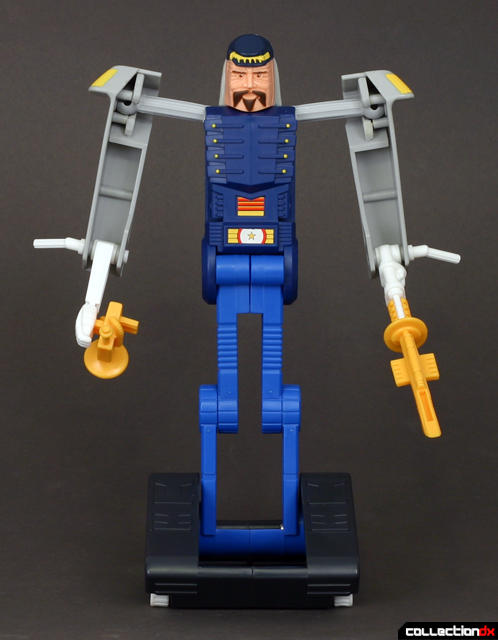 The sword and space bugle really make the figure pop. He can wave his arms around somewhat, and bend along his collapsing joints for some poseability. 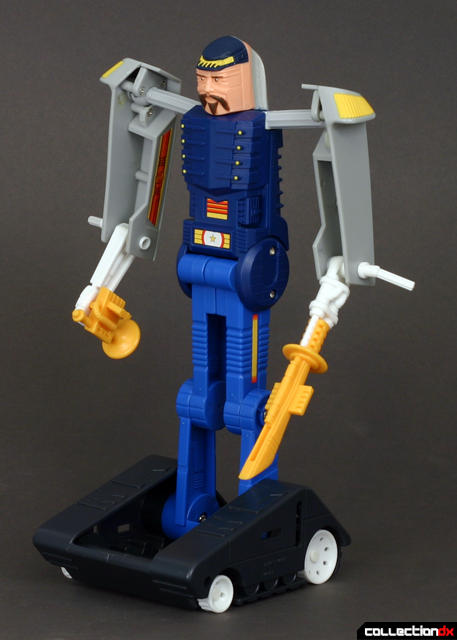 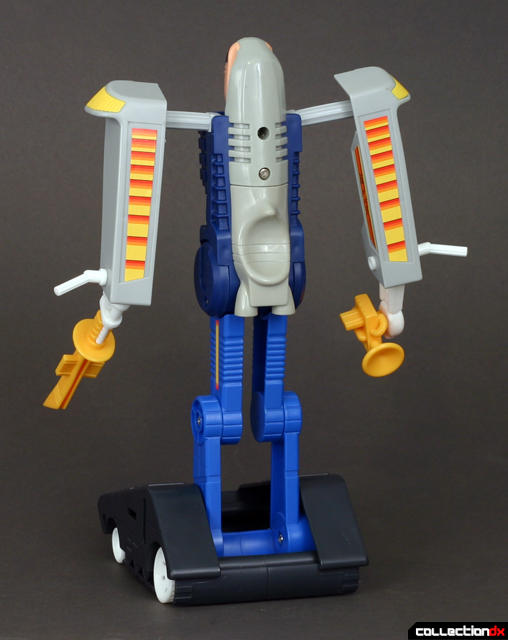 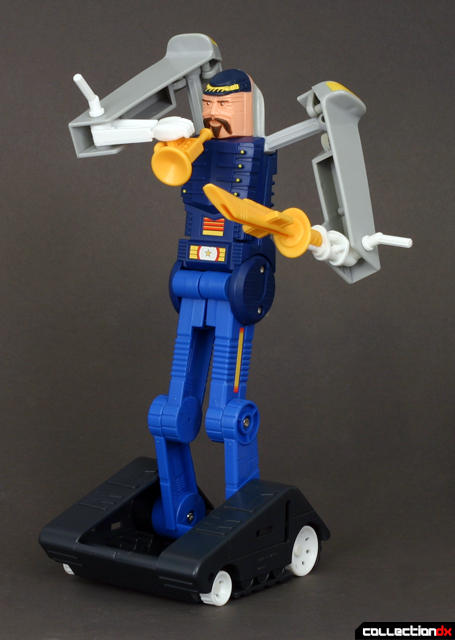 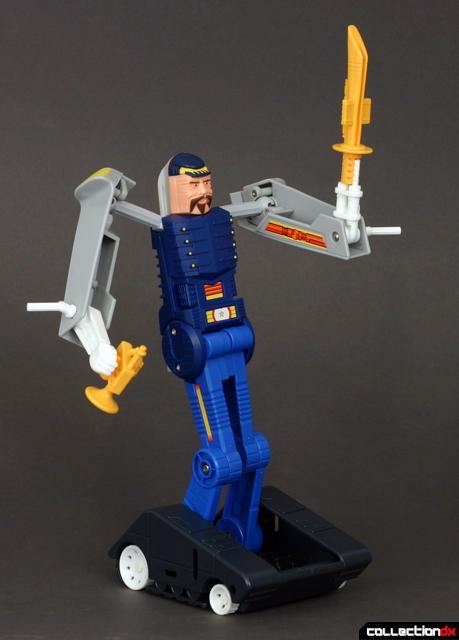 Mostly I'm just happy this goofy thing exists. Adults made this, I'm guessing with a 'what the hell' kind of shrug. What a lovely, strange relic. I love Borobot dearly.

6 comments posted
No tell me how you really feel...

....."In the annals of unloved eighties properties, Bravestarr is unique in its demented lameness. Futuristic science fiction was clumsily cross-bred with the myths of the American wild west into a psychedelic fever-dream."

Wow I can just feel the love from that comment. Hey to each their own but I'm in my early 30s now so when i was a kid it was Heman, Thundercats, Gijoe, Transformers & Bravestarr. I loved Filmations take on animated shows which gave us so many characters with such rich back story and distinctive characteristics. Blackstarr their first foray or early foray in animation was floppy at best, but then they hit their stride with Masters of the Universe. Ghostbusters, She-ra and Bravestarr.

For an American animation company they were doing amazing stuff compared to sunbow and as we know a lot of cartoons originated from Japanese animations that were just dubbed over and brought to the United States.

Yes by todays standards Filmation uses a lot of clips over and over....but that was standard practice in the 80s. And with the re-release of entire seasons on dvd Filmation cartoons still hold up better than some of the other 80s products like Thundercats.

I was born overseas so we got a lot of British/European stuff too that might not have made it over to the U.S. and the only other Sci-fi western was Galaxy Rangers...so I think the concept was way ahead of its time (ala Firefly) and its execution.

And if Bravestarr was as lame as you say it was it wouldn't have gotten past 1 season.

"Blackstarr their first foray or early foray in animation was floppy at best, but then they hit their stride with Masters of the Universe. Ghostbusters, She-ra and Bravestarr."

Hate to break it to you, but Filmation was formed in the early 1960's and by 1970 they had at least a half dozen animated shows under their belt. They REALLY hit their stride in the 1970's with animated shows like Fat Albert, Star Trek: The Animated Series, Tarzan, lord the the jungle and the Adventures of Flash Gordon. During this period they expanded to make live-action shows (The Secrets of Isis, Jason of Star Command, etc.) as well. Although they are most famous today for the toy based shows of the 1980's, it didn't pay enough to cover the bills, and the studio closed down in 1989 (IIRC).

Thanks for the thoughtful comments. I appreciate the contrary point of view. It's often easier to casually slag off some show or toy than really delve into the nuance, and I'm happy to be reminded of the problems with that.

That said, we are talking about silly cartoons of debatable quality, so I can't get too worked up about even those shows which I really loved. For instance, I was eager to snap up the reissued Transformers DVDs . I had precious memories of those cartoons. Turns out, at least for me, they were unbelievably boring through adult eyes. Which doesn't diminish their value then or now. It's just that my adult sensibility isn't sufficiently colored by nostalgia to retain my childhood tastes. In my cynical adult opinion, Bravestarr was goofy and Filmation produced lesser quality animation. I am very possibly wrong.

I enjoy collecting the great artifacts from these properties, which can sometimes transcend the source material. If it wasn't clear, I love that Bravestarr was goofy. I wouldn't spend the money and time to buy and cover the toys if I didn't love them.

...as an adult the source material isn't always or at all riveting stuff, but I view it with the same reverence as I do the toys. For instance transformers are merely fancy robot toys as diaclones... but add that cartoon and they give them life... with names like prowl, grimlock, starscream and soundwave.

So to me without the cartoons there would be very few toys since it is the driving and marketing force behind it.

I do agree the Filmation stuff is goofy, thats part of its charm and signature to Filmations cartoons. I also don't agree with it being lesser quality animation. I'm not trying to be a sh*t starter but how is it a of lesser quality and by what standards are your comparing it to? If comparison to other 80s cartoons then which one or if comparing to newer cartoons wouldn't seem fair. So to me everyone has their own take on it, so I agree to disagree.

I didn't mean to get bent out of shape with my first response, it was just your first sentence really rubbed me the wrong way. It sounded like an art house film critic trying cut down a summer movie like say Fast & Furious, we all know its not going to win any oscars but it is good for what it is...a mindless fun summer blockbuster.

And just an observation since I frequent the sight somewhat, so no offense ... you tend to review mostly robot / mech inspired toys I notice, so Bravestarr which is fantasy/ superhero-ish might not be your cup of tea.... I might be wrong.

Bravestarr was the last show Filmation ever made unless I'm mistaken, and they'd certainly improved quite a bit by them compared to their earlier shows, and Bravestarr had a lot less obvious stock footage too - especially compared to Ghostbusters, with the stock footage transformation sequence that took like 90 seconds to finish!

In terms of writing though, well, this IS an 80's cartoon we're talking about here - you wouldn't start seeing more risque storytelling in kids' shows until the 90's, and you'd definitely not get one from a show produced Filmation. Still, Bravestarr beat Captain Planet with a "kid dies from drug overdose" episode by several years.

I loved the Bravestarr cartoon and toys, used to have him.
Don't know if you mentioned it in the review, but you can remove the saddle to store the kerium pieces.