This is one of those toys that I tried really hard not to buy. I saw it on Yahoo!Japan auctions for what I thought was a very reasonable price (3,000yen), but just didn't want to spend any money. I even tried to talk Sanjeev into buying it instead of me, but he wasn't having it. But a couple months later I was ordering some other stuff, and it was still there so I took the plunge. And I'm glad I did. This isn't exactly one of my favorite characters, but this particular vinyl is pretty neat. 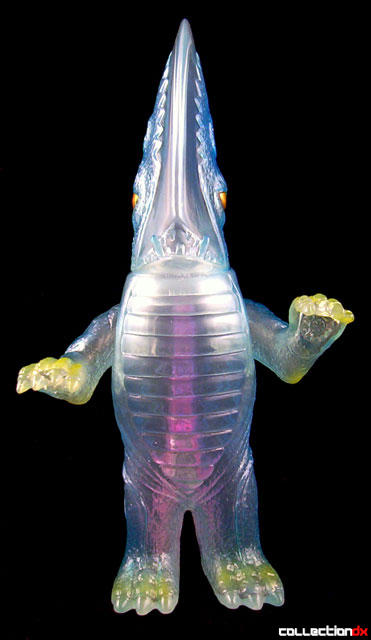 Guiron is from the 1969 Toho film "Gamera vs. Guiron", released in the US as "Attack of the Monsters".

This toy was made by Marusan and stands the standard 9 inches tall. It's articulated at the shoulders and neck only. Of course, it's real appeal is that it is made out of clear soft vinyl. Adorned with light blue spray and highlighted in yellow and purple, I thought this was the best looking Guiron vinyl I'd ever seen. Really, my one and only gripe with it is that the teeth are not painted. I think that detail would have really made for a nice touch. 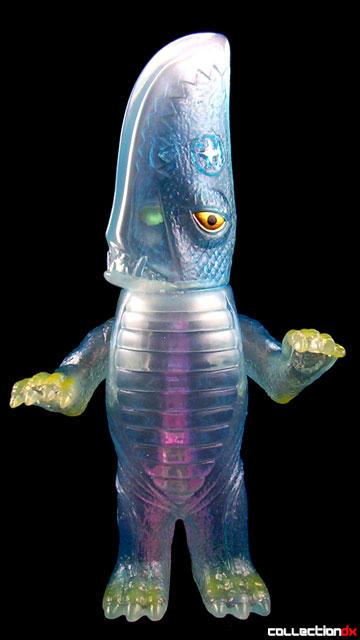 Guiron comes packaged in a bag with a header card. 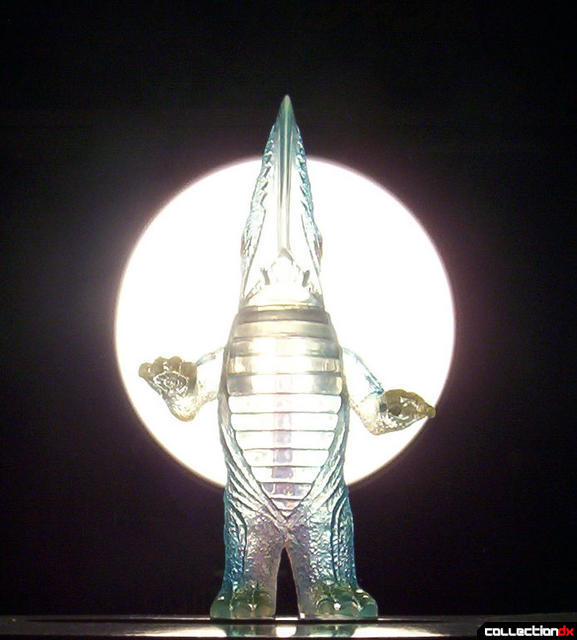 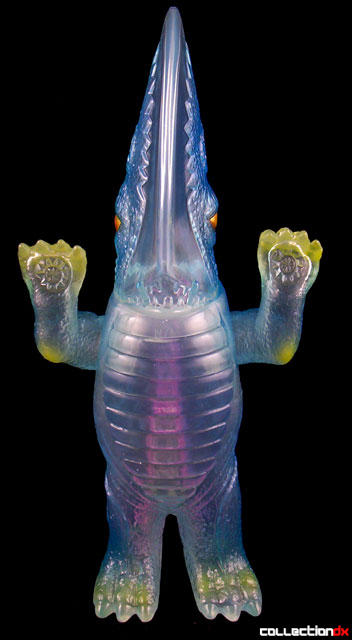 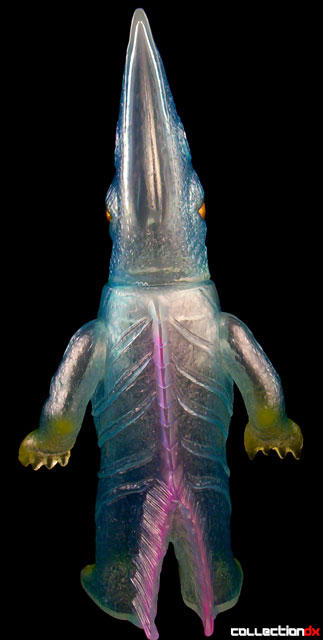 3 comments posted
The irony is...

Now, all I need is a glowie (or translucent) Jiger to finish off the Showa Gamera kaiju (there's a Marusan glowie, but I can never seem to find it)...

Anyway, with all my experience filling translucent vinyls with glow gravel, I've gotten to know translucents pretty well. Lemme tell ya, this one's expecially well done. The vinyl has a wonderful clarity that ya just don't see on many translucent vinyls (especially Bandai ones).

And, yes, my Guiron is getting the glow gravel treatment. See, kids? Peer pressure works! Thanks, Nekrodave!!

This guy is easily my favorite Gamera kaiju besides Gamera himself.
Obviously,none of the showa era Gamera characters are anywhere near Toho's in terms of being classic icons,but every now and then I enjoy a change of pace. Gamera movies are wonderful IMO,because they just don't care. You'll never see Godzilla stick telephone poles in his ears,or perform a rousing accoustic rendition of his theme song on an enemy's spinal column,but Gamera really rises to the occasion. They knew the movies would be considered stupid by anyone over 6,so why not go all out?

...perform a rousing accoustic rendition of his theme song on an enemy's spinal column

Hahaha...I was just watching Zigra the other night. I actually just scored the X-Plus unpainted glowie of him. I just love underwater monsters!

But, yeah, I know what you mean about showa Gamera kaiju. Perhaps not iconic, but definitely distinctive. One of my favorites is Barugon (obviously not to be confused with Toho's Baragon!)...dude: flame-throwing tongue!