As part of their Iron Man 3 push, Hasbro released another batch of their highly popular six inch Marvel Legends comic-based figures.  Two waves have been released so far, totalling six figures.  Collecting all six figures allows you to assemble the set’s Build-a-Figure, a massive comic book Iron Monger!  The waves are a mix of repaints and new molds.  Almost the whole set is nicely done, so I wanted to walk briefly through each of them in a series of reviews that will culminate with the Iron Monger. 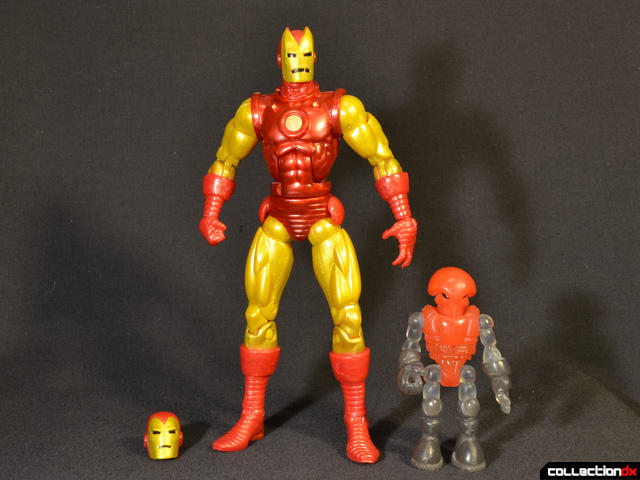 First up is the Classic Horned Iron Man.  When Iron Man’s red and gold suit debuted in Tales of Suspense #48, the helmet sported a sharply shaped mask that would evolve into the horned look depicted on this figure.  The red and gold suit went through a few subtle revisions, mostly in the helmet, before settling on the true ‘Classic’ suit look depicted by the second head included.  I’m still waiting for a Mr. Doll figure to play out that issue, Hasbro! 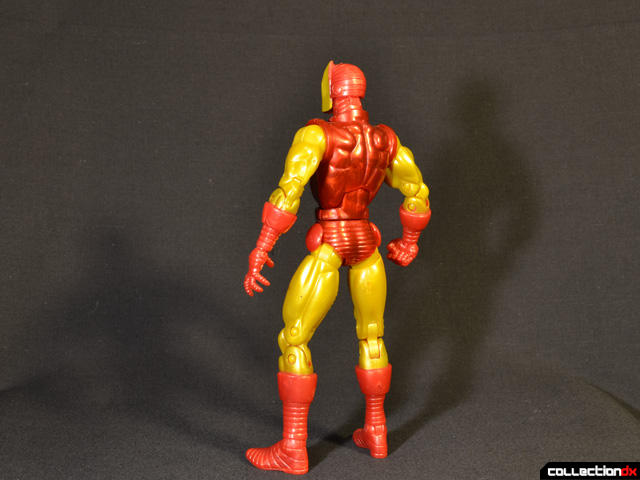 The figures in the IM3 Marvel Legends wave make the most of molded plastic colors over paint applications, and Classic Horned here is no exception.  The majority of the figure is molded directly in either a swirly red metallic color or a milky gold. 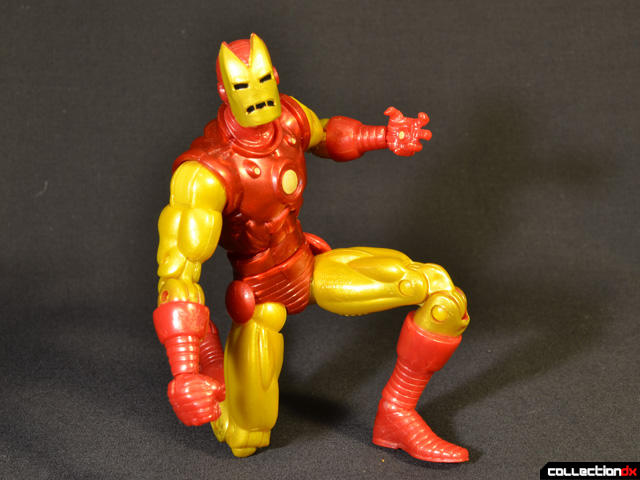 This guy is actually one of my favorite Marvel Legends Iron Man molds.  The sculpt is lean and powerful and does an excellent job of capturing that early ToS-era Iron Man.  The figure also boasts solid articulation, including a nice ab crunch and a good neck. 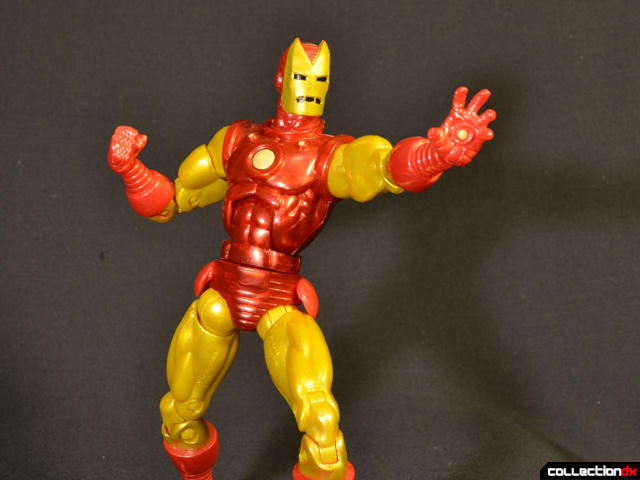 One of my favorite things about this figure is the sculpt of the repulsor hand.  Since the Iron Man movies came out, everyone has depicted Shellhead with very flat hands while using his repulsors.  The hand sculpt here is much more in line with the comics, with a powerful grip as if it takes all Stark’s might to keep his hand steady while unleashing some transistor-powered repulsor ray whoop-ass. 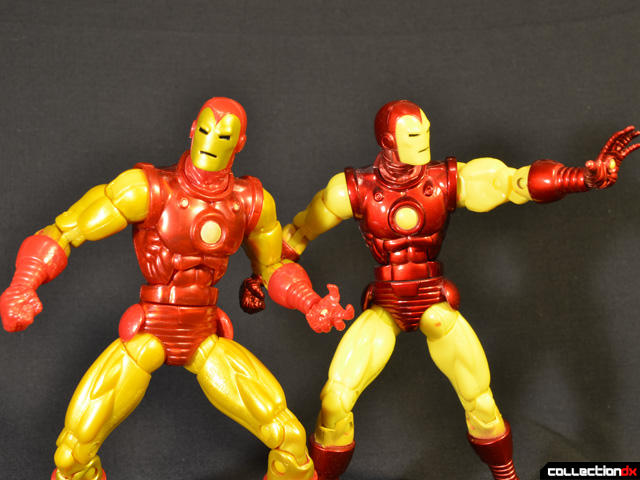 This guy is actually a repaint of the first Hasbro Marvel Legends Classic Iron Man figure.  This mold was in the first wave of Hasbro’s relaunched Marvel Legends line after a long hiatus to make room for the smaller Marvel Universe line.  It was also the first new six inch depiction of the Classic armor since the Toy Biz sculpt from the debut wave of the first Marvel Legends line.  Oddly, while the new toy is mostly a straight repaint, the repulsor hand that I love so much is a different sculpt.  The red and yellow version came with two sets of swappable fists and repulsor hands, but the repulsor-firing left hand is a different sculpt.  I am not sure if the hand used on the IM3 release is a new tooling or something recycled from another figure. 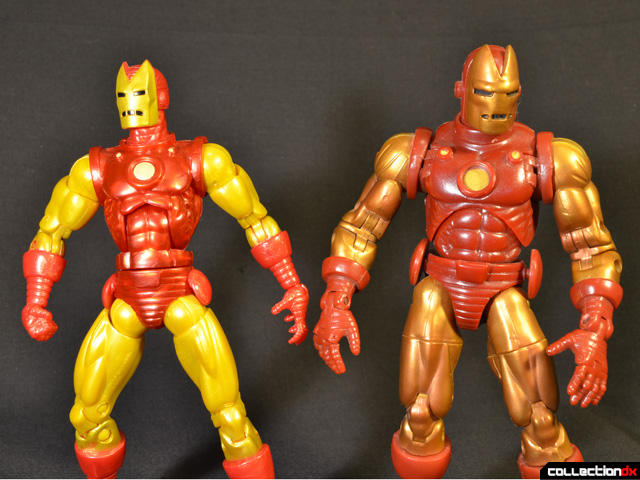 Comparing the IM3 figure to the original Toy Biz sculpt speaks to just how far action figures have come.  At the time, the first wave of Toy Biz Marvel Legends were a bit of a coup, combining the kind of sculpting that companies like McFarlane Toys were pioneering with a level of articulation unseen in Western action figures at the time.  Toy Biz’s sculpts often suffered a bit in the name of that articulation, and Iron Man here is no exception.  The TB sculpt is a hulking brute, but still one of the most posable Iron Man toys ever released.  It is easier to imagine a man fitting inside the TB sculpt, but the Hasbro figure is more true to the comics. 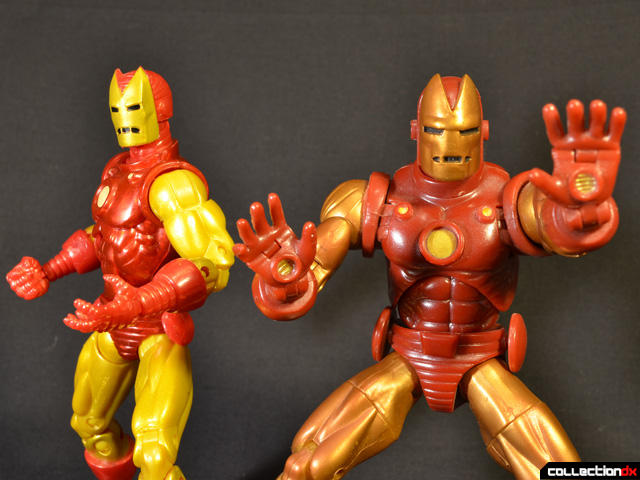 These days the Hasbro sculpt is better looking, but that old Toy Biz Iron Man still holds a special place in my heart.  It was my first Iron Man action figure, the first of many. 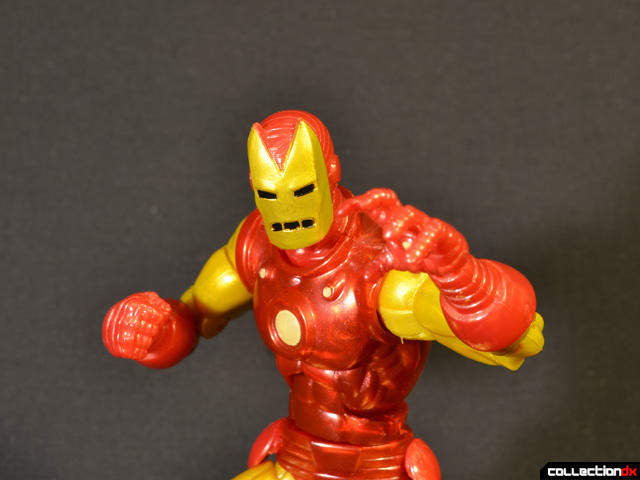 Hasbro’s IM3 Marvel Legends Classic Horned Iron Man is a great figure.  It comes packaged with Iron Monger’s right leg.  The retail price of about $18 is a little much for a figure of this size, but the Monger leg is a hefty piece of plastic and part of something great once the whole figure is assembled.  If all you need is the Iron Man, this is an unsophisticated figure of an unsophisticated armor that manages to perfectly capture a long-gone period in comic art while being a distinctly modern toy.

1 comment posted
If we ever get to a point

If we ever get to a point where someone is forced to release a Mr. Doll, I think we have truly reached peak Iron.