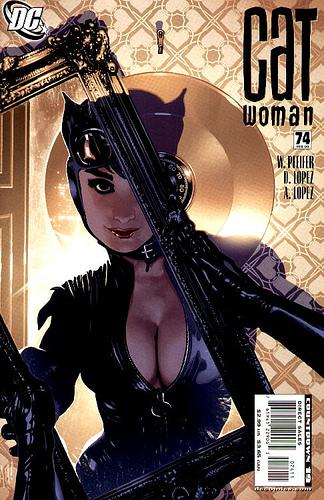 Catwoman has undergone numerous roles and costume shifts throughout her long history with Batman. Since her introduction in the 1940s, there have been about 8 different “looks” for the character. The version that we see here, with the pragmatic but sexy catsuit, boots and goggles, is based on the most recent version introduced in the early 2000s. The Catwoman open-cleavage look is a popular one and you can see a rendition of it here on the cover of Catwoman #74 by Adam Hughes.

The Catwoman Bishoujo statue comes in a 4-color window box. 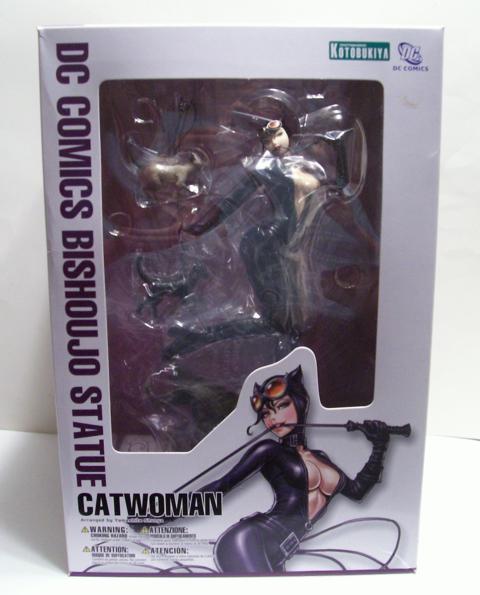 Box comes with a Bishoujo style illustration of the featured character (Catwoman). 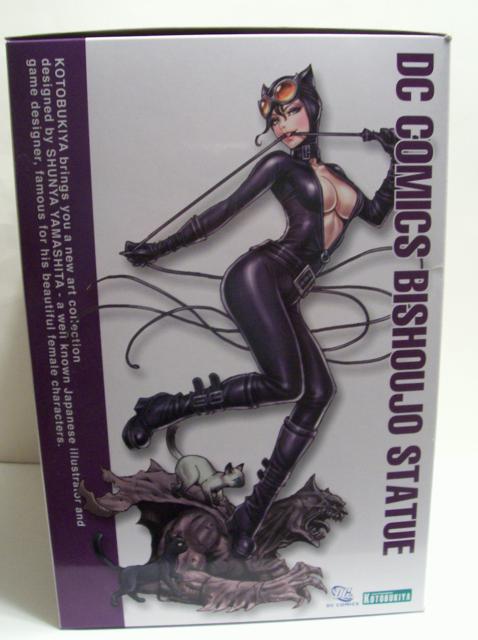 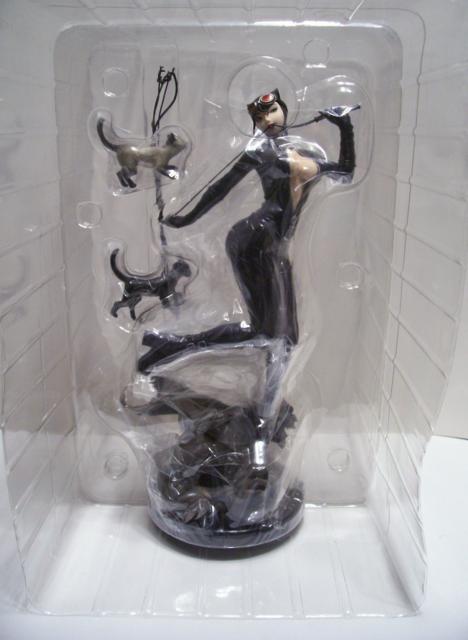 The full set comes with an instruction booklet, Catwoman’s cat o nine tails and two plastic cats that go freely on the base. Detail is so precise that you can even see the pads on the cat's individual feet! 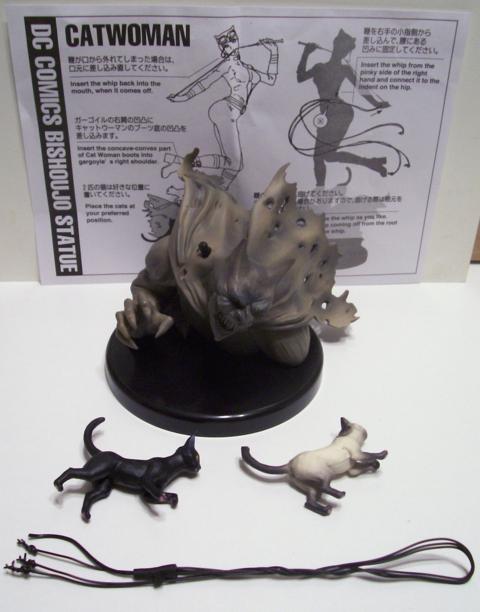 I’ve come to expect very good things from Kotobukiya and Shunya Yamashita-and the sculpt on Catwoman is no exception. Here's the basic statue without the whip extension/attachment. As a statue there is no articulation and of course, being from DC, no cast off. 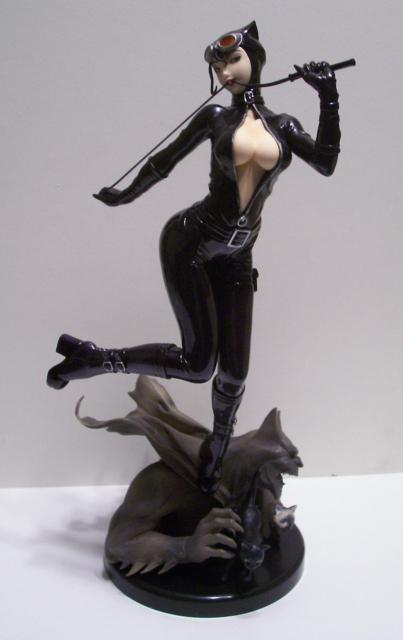 The facial sculpt is very expressive and captures the whimsy of Catwoman going from rooftop to rooftop.The hair is really a great touch and her eyes just capture her emotion. 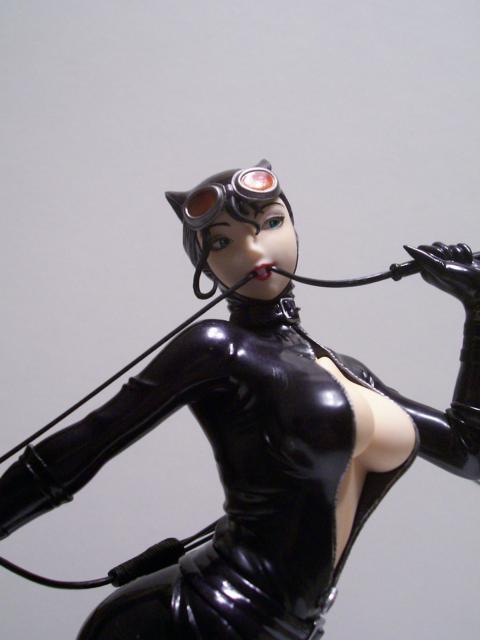 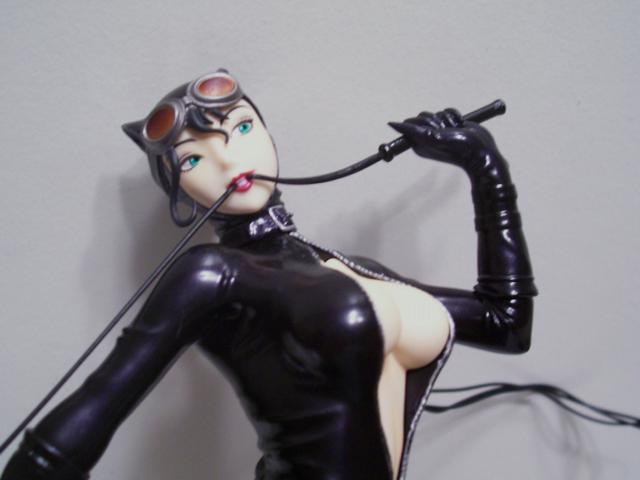 The catsuit colors are really a nice shiny black. 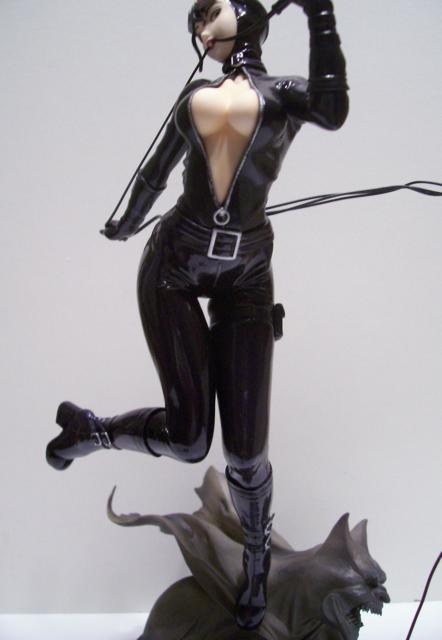 The open cleavage is great and the artist has done a great job at showing off her curves.. 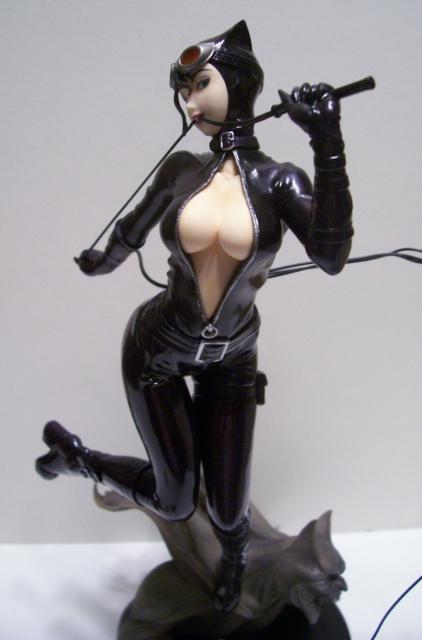 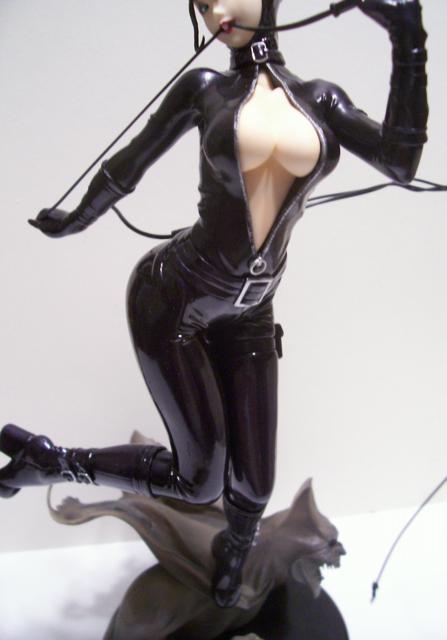 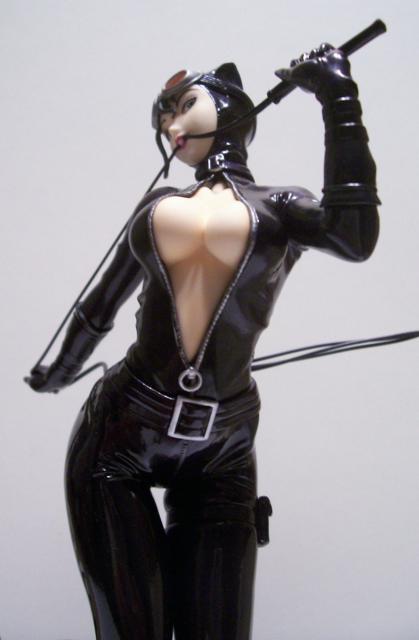 as well as all of the folds and creases that accompany something so skintight.. 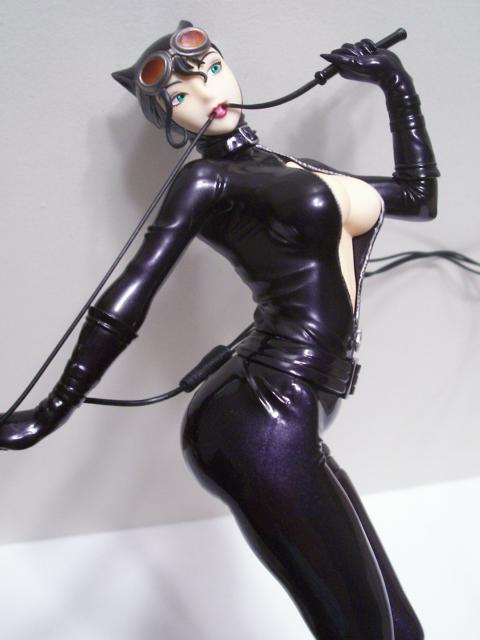 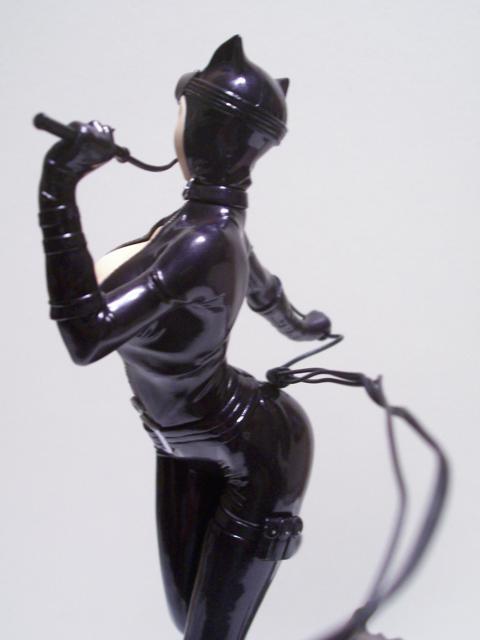 The hips on the figure are voluptuous and give her some natural and pleasant proportions. 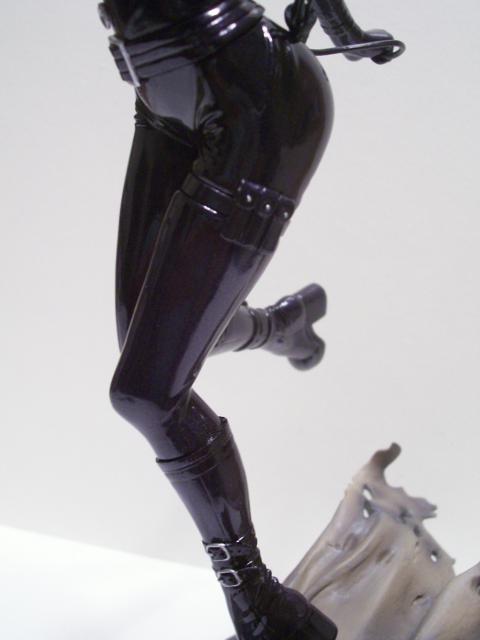 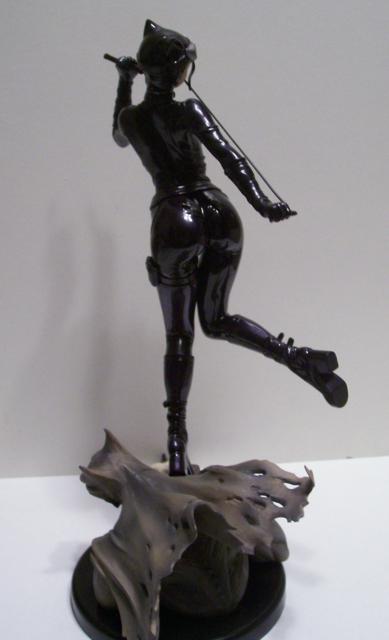 The ass is awesome and goes well with her tight-fitting catsuit. 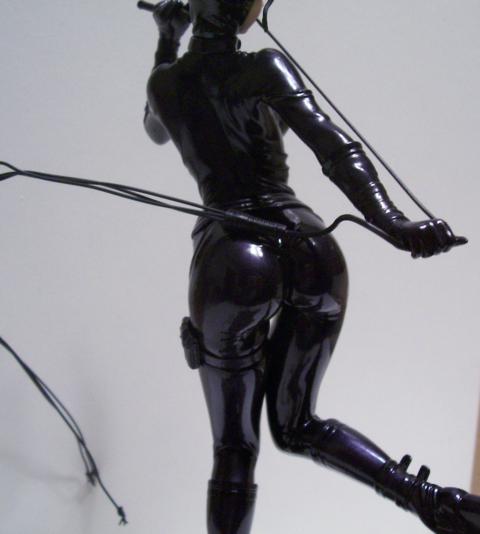 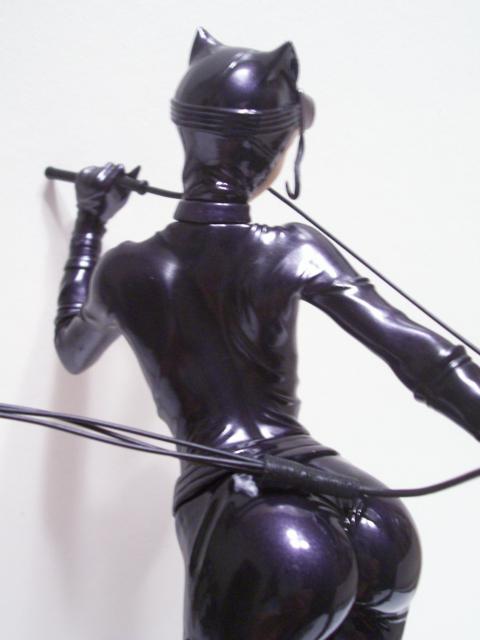 The cat o nine tails is wire-like. Posable but not fibrous. 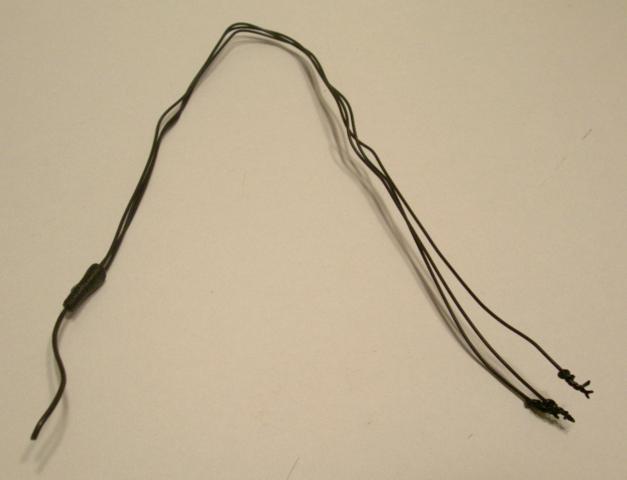 < The proximal part of the cat o nine tails is already part of the statue. The more distant part of it has an attachment point that attatches to a small notch on Catwoman’s ass. 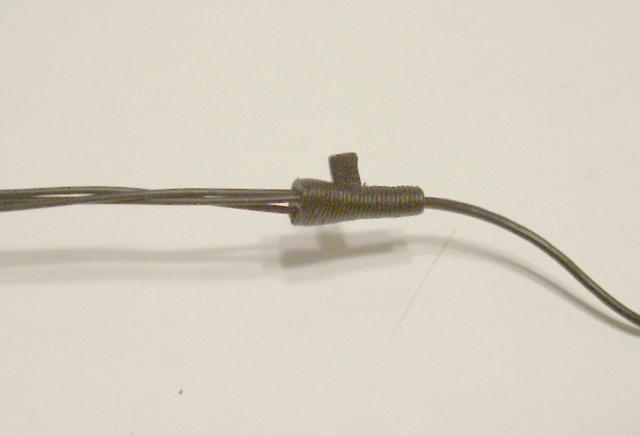 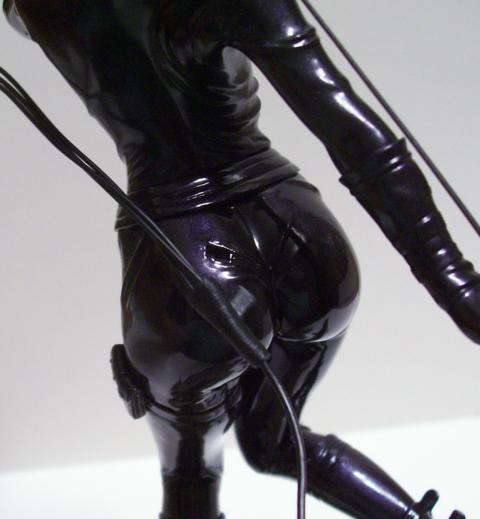 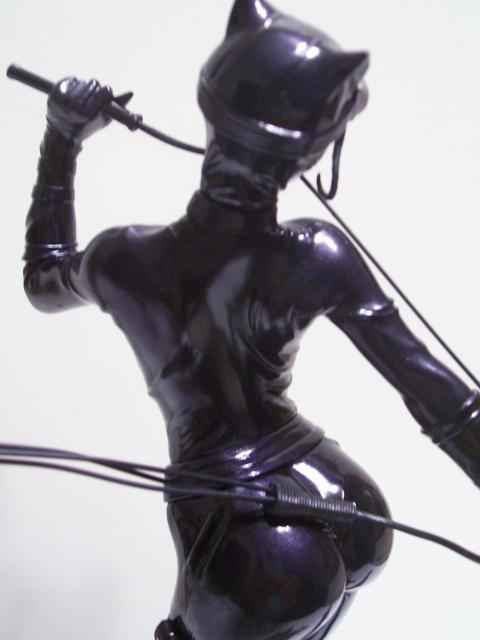 The base is quite ornate. The Batman-inspired Gargoyle is highly detailed. It almost overwhelms the Catwoman figure itself.. 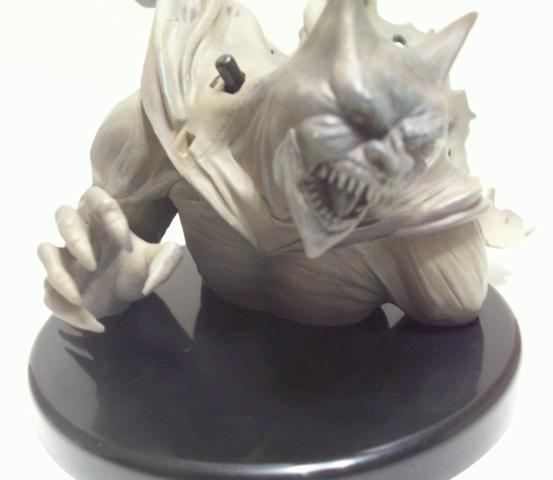 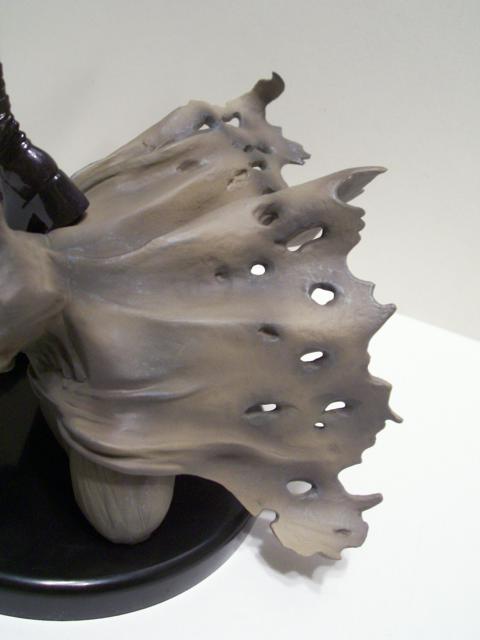 The figure articulates the base via these stubs on the foot 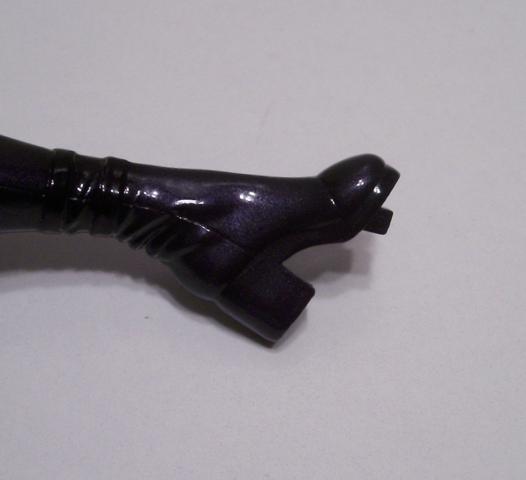 and the hole on the gargoyle. 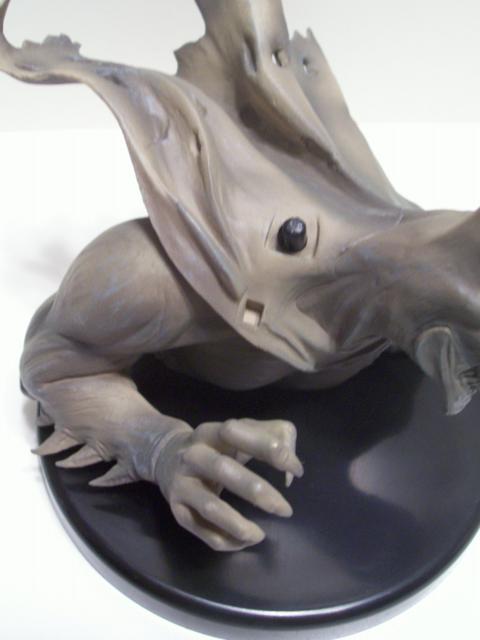 A new figure articulates pretty well but in my experience as time passes, the PVC can weaken and your statue starts to sag. Also, the articulation between the foot and the base can weaken, resulting in loss of attachment.And the figure itself doesn’t stand on its own..so be aware of that.

Gargoyle is very strongly articulated with the plastic base itself. 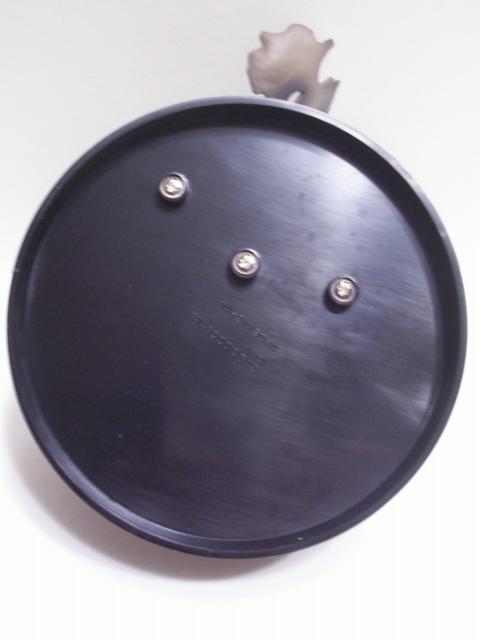 Overview. The Bishoujo Catwoman is a good statue with imperfections. My big gripe with this statue is the articulation with the base, which I suspect will loosen and fail over time. And/Or alternatively, you might have some gradual weakness on the leg resulting in some unwanted tilt. On the plus side, the Catwoman statue is a fantastic sculpt with great details and at the 1/7 scale displays excellent presence on your shelf. The trade off for the articulation issue is the dynamic pose Catwoman displays on the Batman-Gargoyle. I’m happy with the statue, even with the anticipated issues and I think you will be as well.