Carnifex is MMC's take on the IDW version of Overlord, most famous for being the sadistic antagonist in the Last Stand of the Wreckers series. Carnifex comes packaged in a large cardboard box with cut foam interior. Included in the box are Carnifex with gun, swords and sheild, extra head, stat card, and instructions with full color comic book. Carnifex stands a solid 12 inches tall from his feet to the top of his head. He will absolutley tower over the vast majority of Voyager (and most mp) bots, as he should. 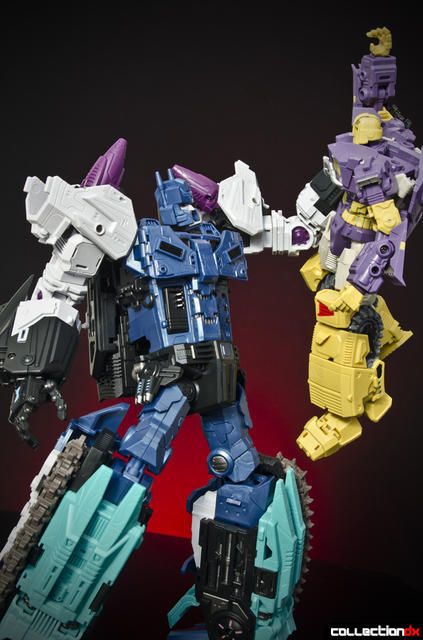 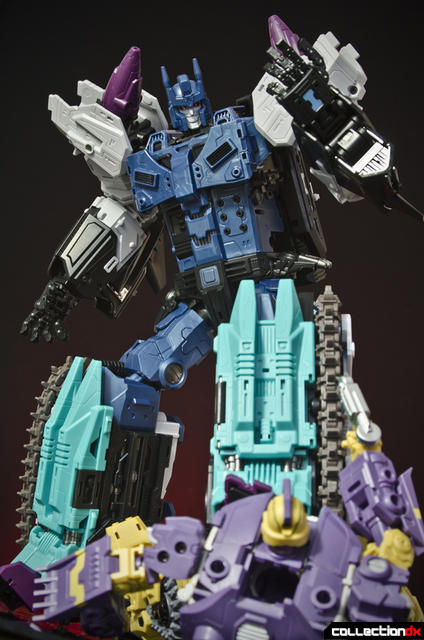 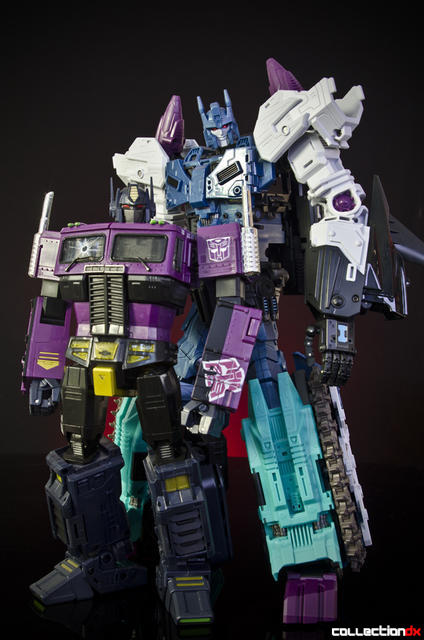 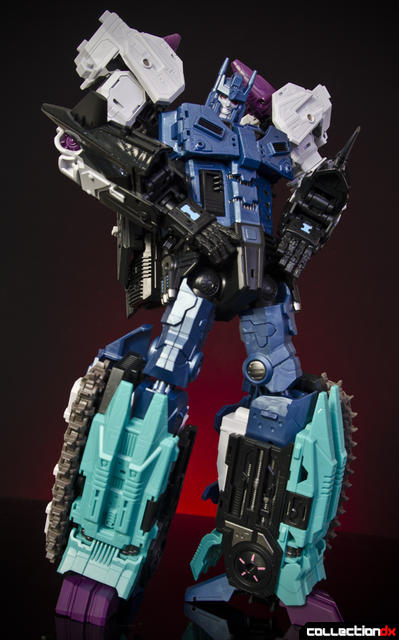 Articulation is above average. there is a wide range of motion in the shoulders and arms as well as a fairly decent range in the legs. This allows Carnifex to get into some very dynamic poses. All of Carnifex's fingers are articulated wich allows him to be very expressive with his hands. All of Carnifex's joints are very solid and he supports his weight very well, and his large feet make for excellent balance. 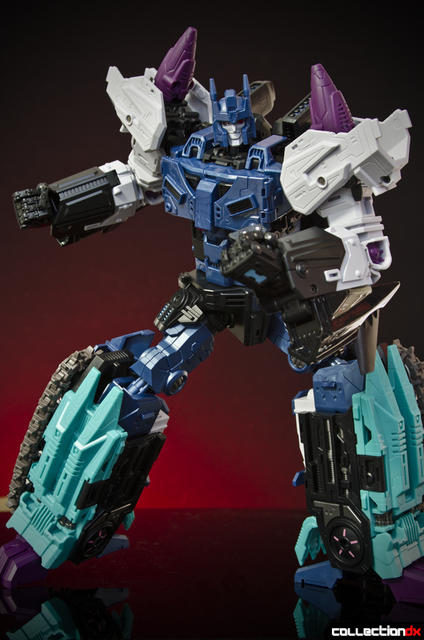 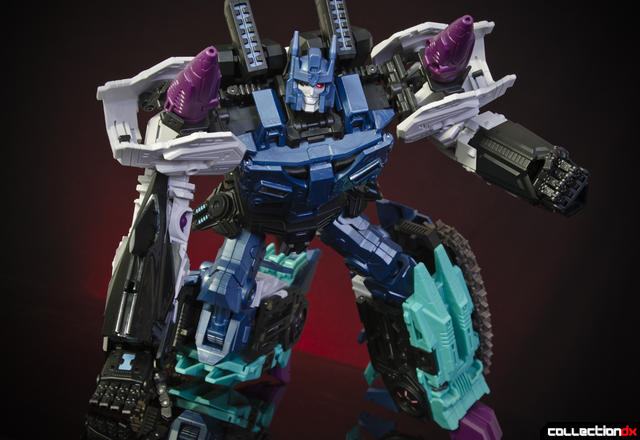 Carnifex's robot mode has several gimmicks. He has two pop out cannons in his chest, as well as panels that open to reveal missile launchers. He has working treads on his legs that have several cogs that turn as the treads roll. His cock pit doubles as a shield and gauntlet weapon. 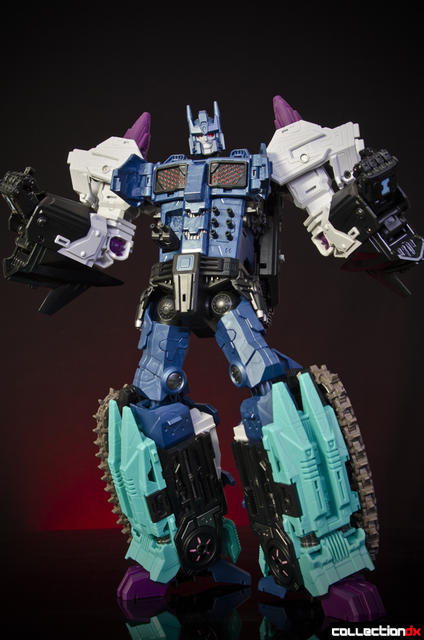 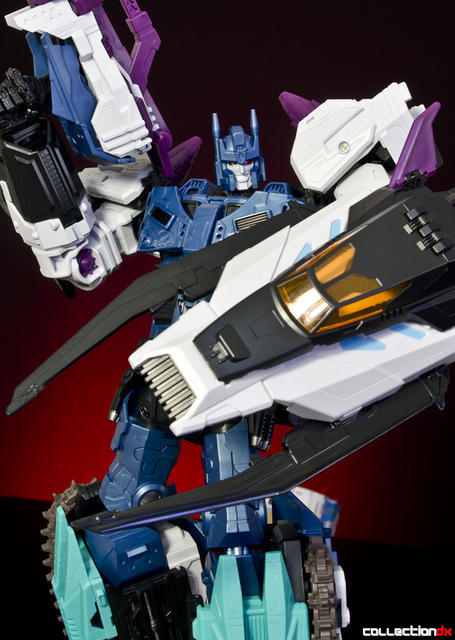 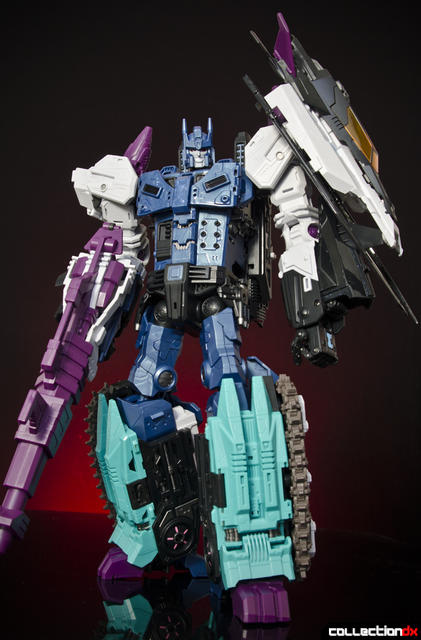 Transformation from robot mode to the individual alt modes is, for the most part pretty simple. The only hang up being that transforming the shoulders for the first time can be a headache. I watched Master Mind's official tutorial video and it still took me the better part of 10 minuets to figure it out. I found that after the first time, it became an easy process from then on. Of the individual alt modes, tank mode is probably the weakest. The turret is fixed and doesn't move, and the back half of the tank looks.... incomplete some how? 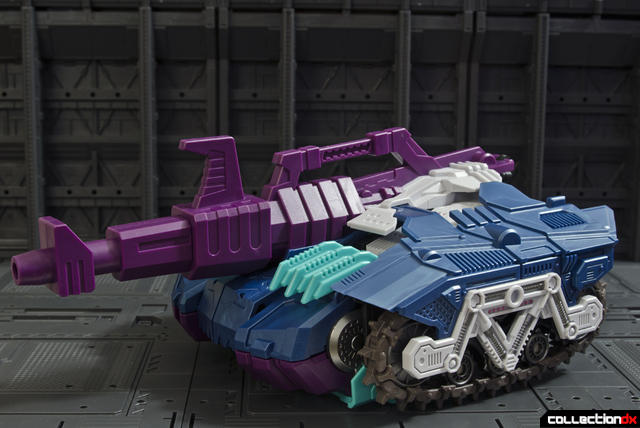 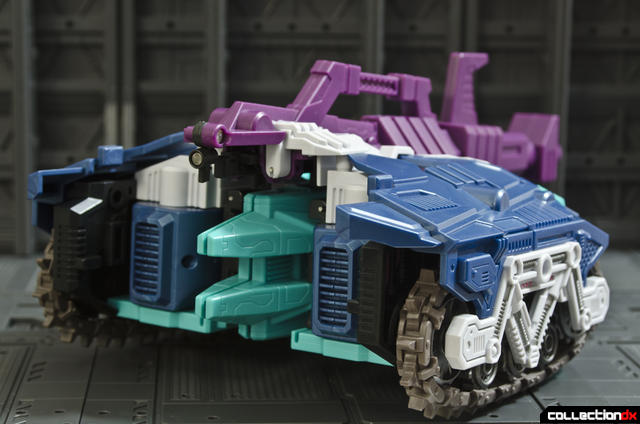 It kind of looks like the front half of a tank thats been cut off, rather than a complete tank. The treads do move however wich is pretty cool. 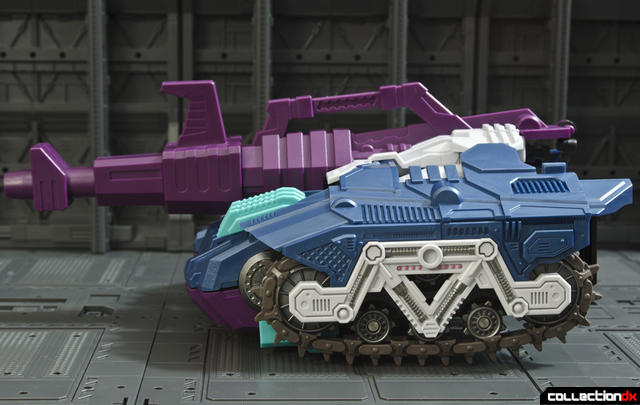 The jet mode is solid. It has an opening cock pit and working landing gear with rolling wheels. 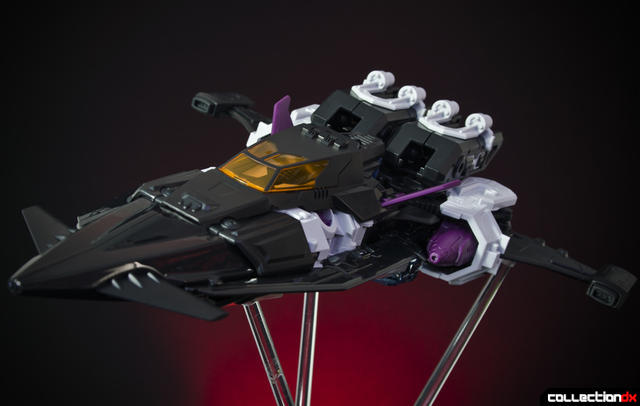 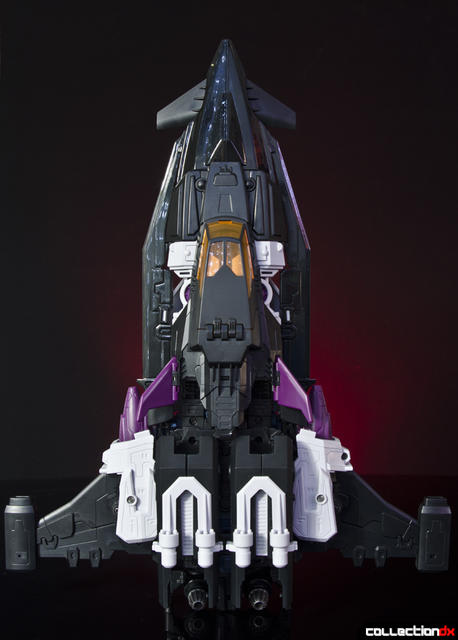 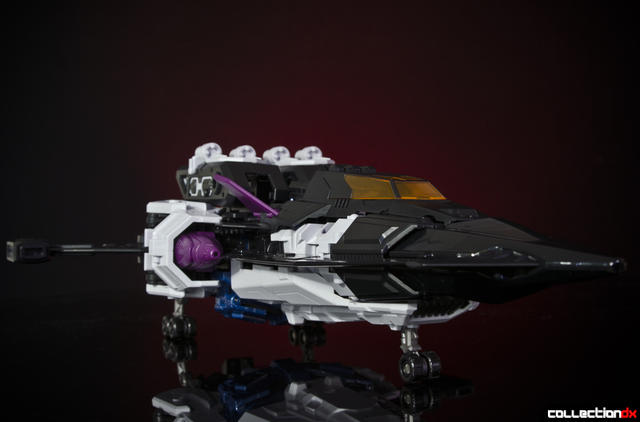 The combined alt mode is very cool. The tank splits in half and pegs onto either side of the jet. 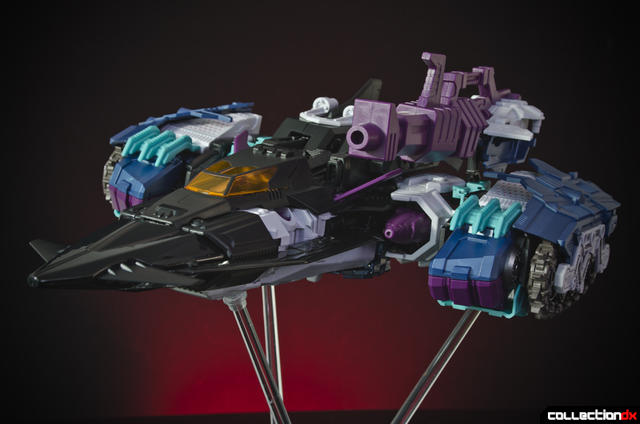 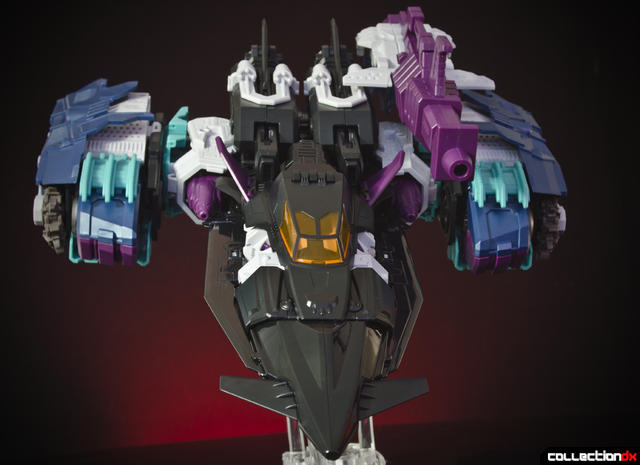 There is, technically, a base mode. Honestly though, it just looks like a jumble of mistransformed parts. The instruction manual does not even include directions for how to perform the transformation. This might be a turn off for some people, but being that IDW Overlord doesn't have a base mode, its forgivable in my opinion.

Carnifex comes with two heads, a standard head, and grinning battle damaged face that re-creates the wound inflicted by impactors harpoon. You can probably tell from the pictures wich face is my favorite. 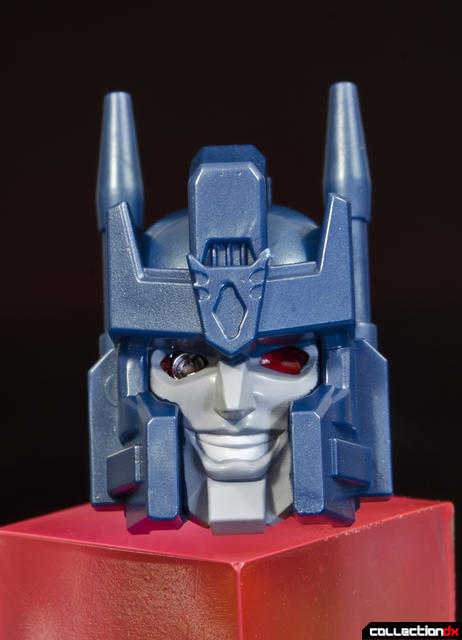 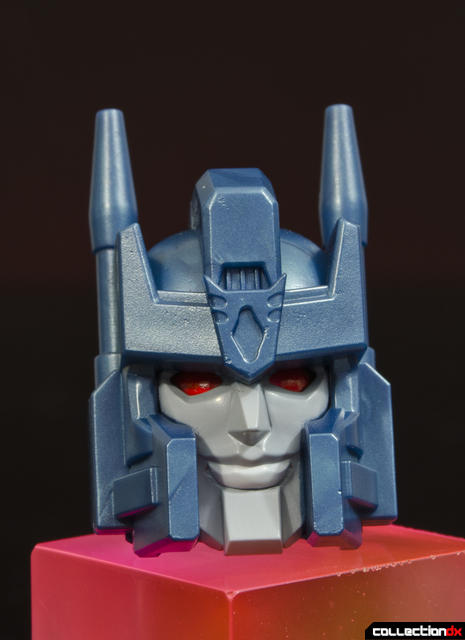 All in all, Carnifex is one of the most solid 3rd party figures I own, and possibly the best MMC release to date. If you're a fan of Overlord in the IDW comics, (and can get past the hefty price tag) this figure is bound to please. 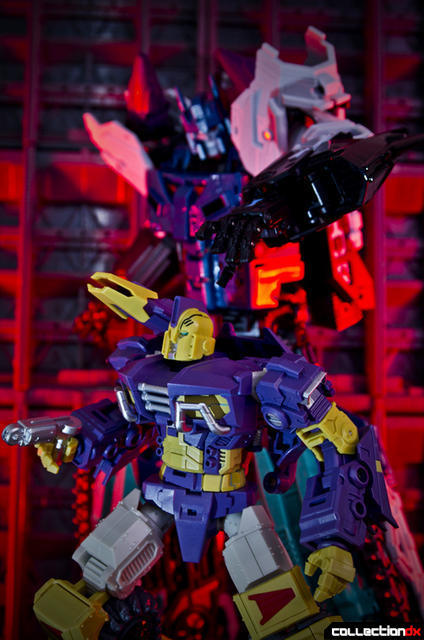 Good review, sweet toy. I see what you mean about the tank. Kind of reminds me of the Spartan/Commutus design. We're less than two years from Masterforce's 30th anniversary, so who knows if Takara will surprise everyone with an MP or G1 re-issue. But I wouldn't count on either happening, especially the re-issue. Seems like they've gotten away from those in favor of the MP line, which is a fair trade in my opinion.

So basically, this is the cheapest and best Overlord out there now, unless you want the small Iron Factory figure. Or the rumored Titans Return figure, which is likely to be a repaint or retool of Black Shadow.