It’s amazing how as adult collectors, we obsess over these things we remember from our hazy memories of childhood. We hunt them down as adults, even if they don’t fit into the current scope of your collection. This is the tale of one of those items. 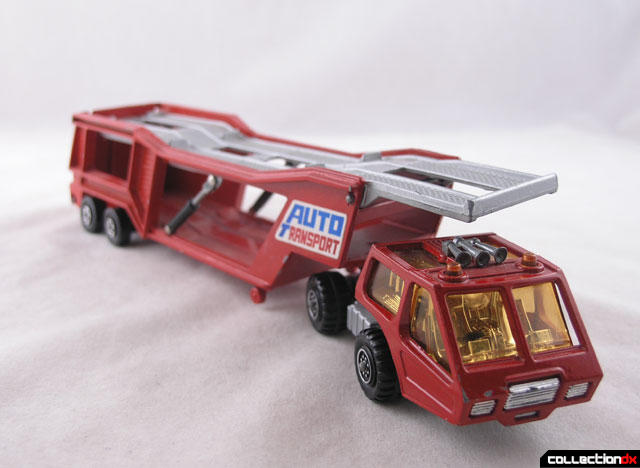 I don’t know about you, but I don’t remember a whole lot about being 4. I have memories from photos, but we didn’t have a video camera, and my parents were not big on taking pictures. I remember we lived in a second-floor apartment on Beacon Street in Lowell, Massachusetts. I had a playroom, which I think was a pantry. The walls were paneled with dark wood. I lived there when Star Wars came out, and my first Star Wars toy I got there was the Land Speeder, which I promptly broke. I was 4, and I remember it was the middle engine on the back that snapped off – my dad re-glued it for me.

I remember I had a friend named John, who would come over and growl. Not talk, growl.

It must have been my birthday in 77 that I got this toy. I remember playing with it in the shared driveway, unsupervised. I remember my mom telling me, don’t leave your toys in the driveway or they will get run over.

I remember, of course, leaving the cab of this truck in the driveway. I remember finding it flattened in my driveway on my way to daycare the next morning. I remember being really, really sad. I had only had it a few days. Lesson learned – take care of your toys. Listen to your mother.

The trailer remained intact, and I held onto that trailer for years, much longer than I should have. It was always this reminder to me that I needed to take care of things. Had I just thrown it away when the cab was destroyed I doubt I would have remembered it. I know I had it until we lost our house in the early 90s, then after that who knows what happened to it.

Flash forward to years later. I am hanging out at Matt Doughty’s house on one of those Friday nights, rummaging through his piles of toys in between drawings, and I spy the cab of the Super Kings Car Transporter. A wave of nostalgia overcomes me. I had forgotten all about it. I get emotional and tell Matt the whole story – he says “here, take it”. I am in awe of his generosity and friendship.

I know I put it in my bag, but somewhere between his house and my house, I lost it. It is as if I am destined to not own this toy.

To hell with destiny, I’m buying one on eBay. I did, and here it is. Stunning. The great thing about it is, not only is it a great memory, but it is also a great toy. 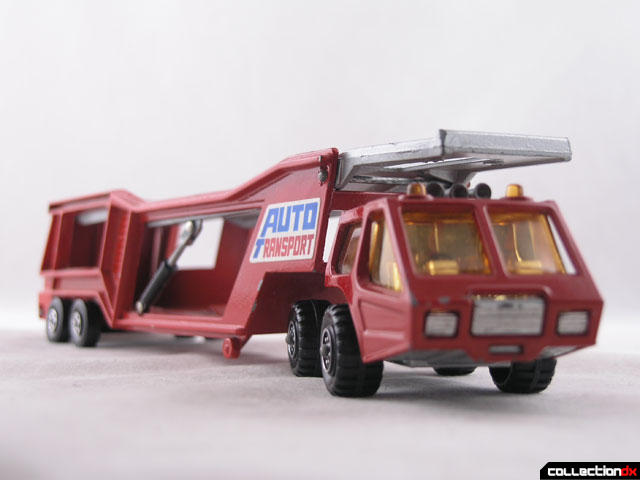 This toy is a big hunk of metal. Its surprising how many design elements share similarities to the Japanese robots of the same time. The cab is a glossy painted red metal, with the bottom being raw untreated metal, held in place by rivets. The windows are a transparent orange, and inside, the cockpit and engine details are chrome. It makes for a dazzling effect. 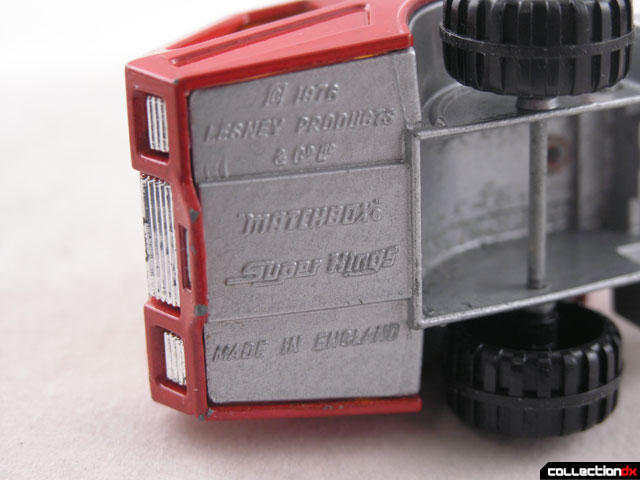 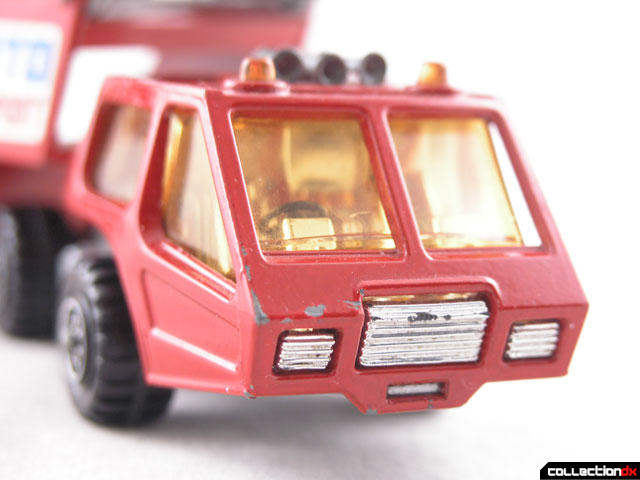 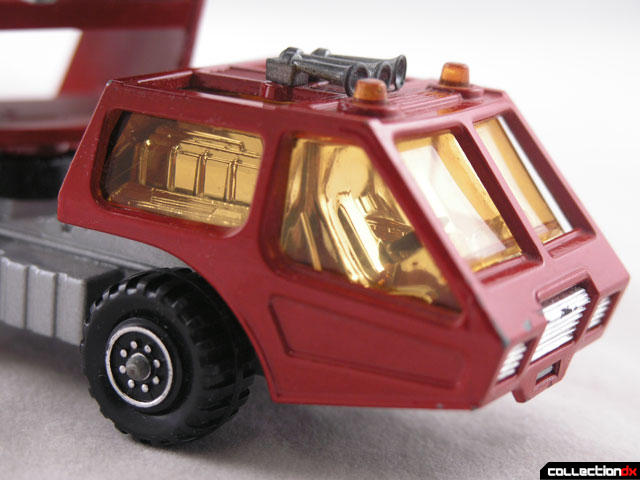 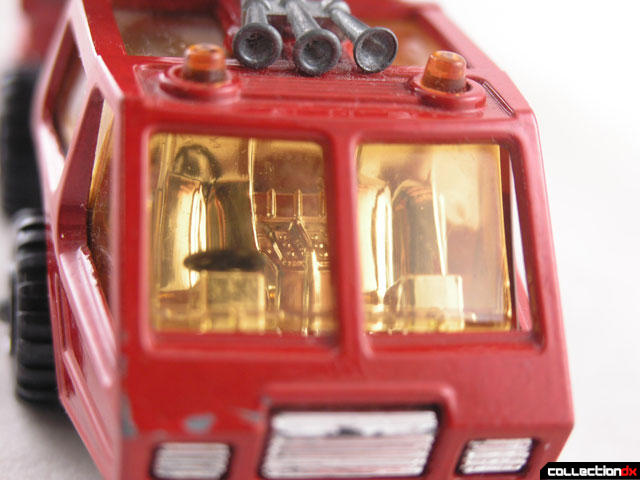 The wheels are large and gnarly – a signature of the Super Kings K series. 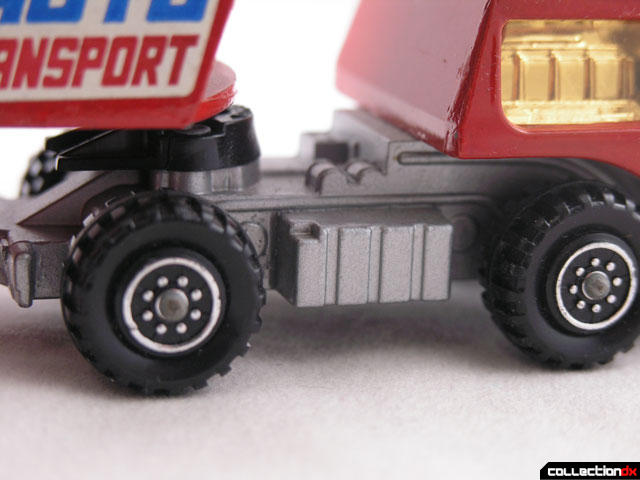 On the back is what they call a 5th wheel – the plate that connects the trailer. This is a softer PVC plastic, which has worn over time. 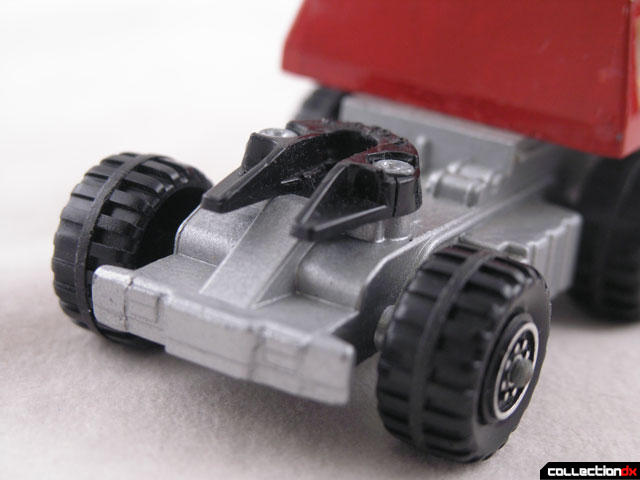 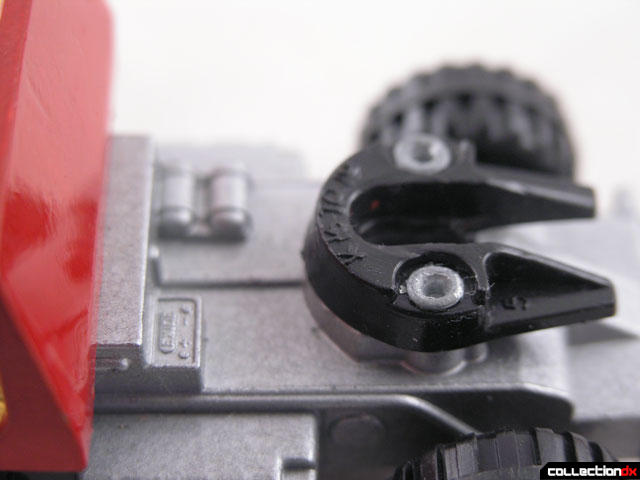 The trailer is also metal. The body is the same painted red, while the upper deck is painted grey. The trailer can hold 5 cars of Matchbox scale, but I was always more of a Hot Wheels kid. The upper deck has textured tracks for the cars, and small indents to keep the cars in place. 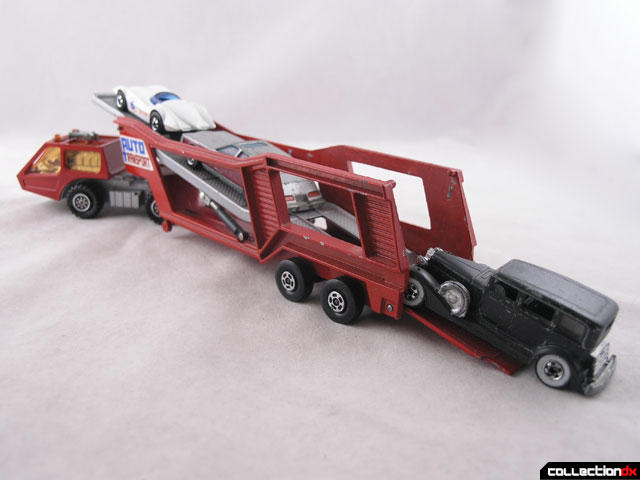 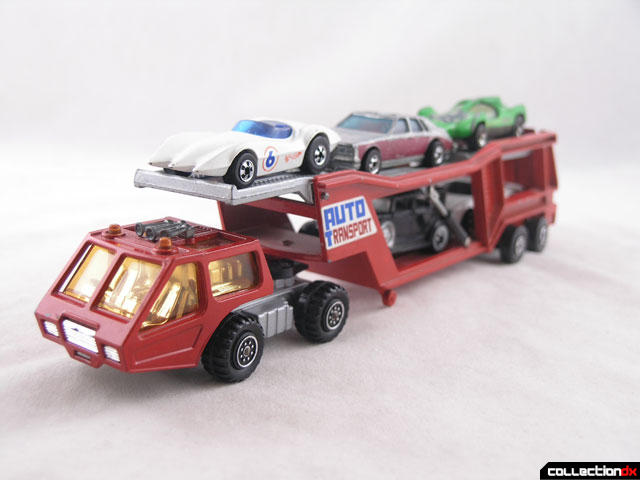 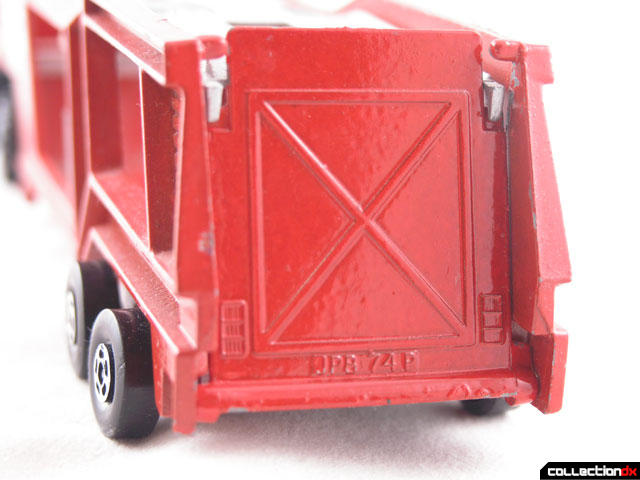 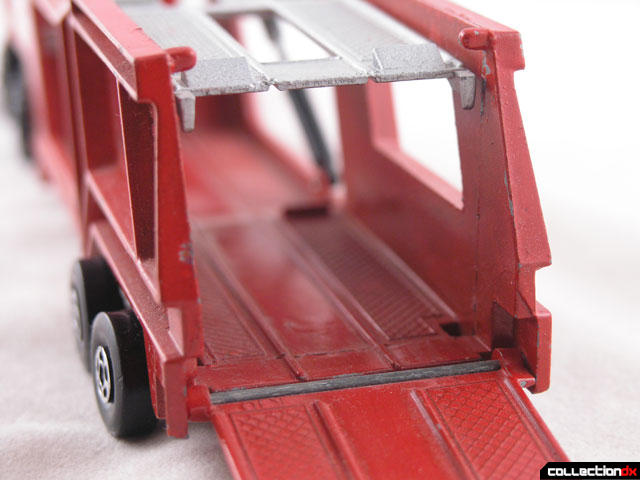 The upper deck is held in place by tabs that hook onto the red metal door on the back. Two working pistons hold the deck up, and help it descend with just the right amount of friction. 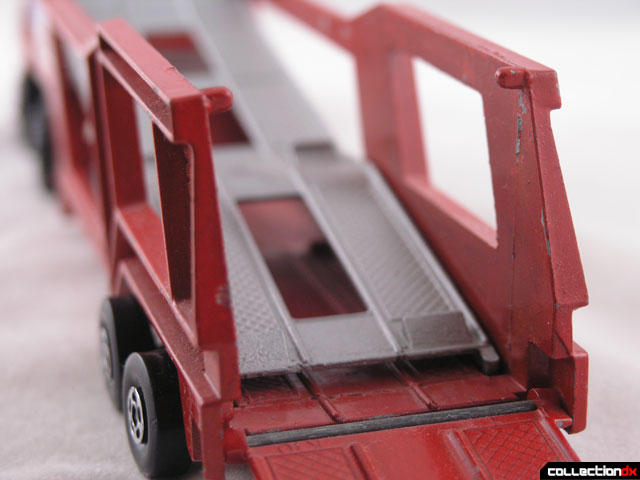 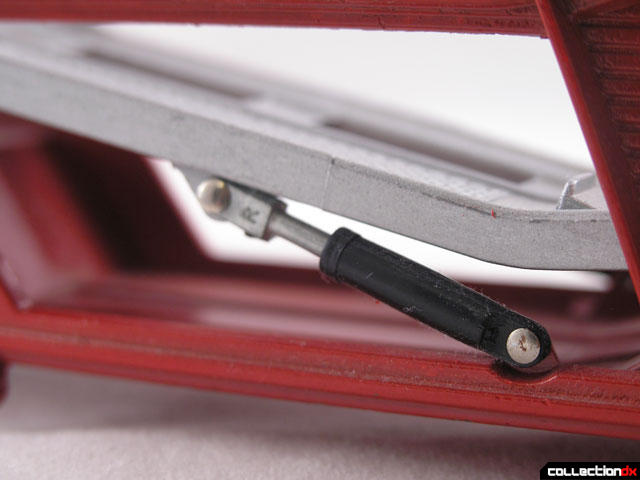 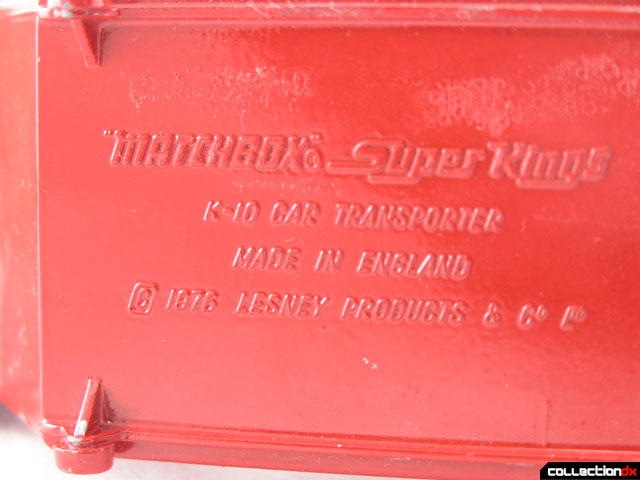 I’m not going to start collecting Matchbox toys, or cars in general, but I could be tempted to get a few more Super Kings. These things are awesome. 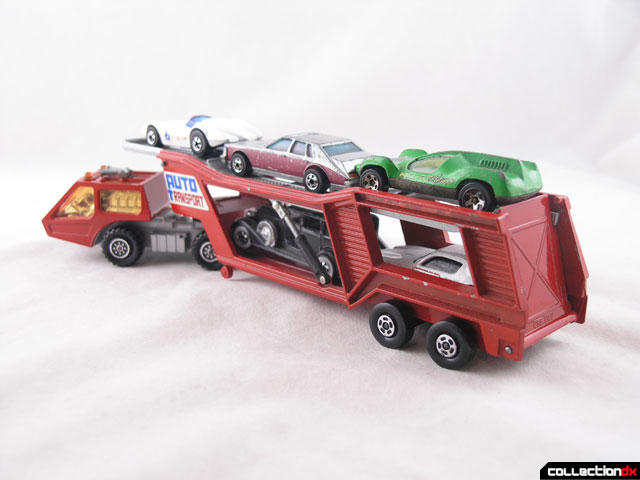 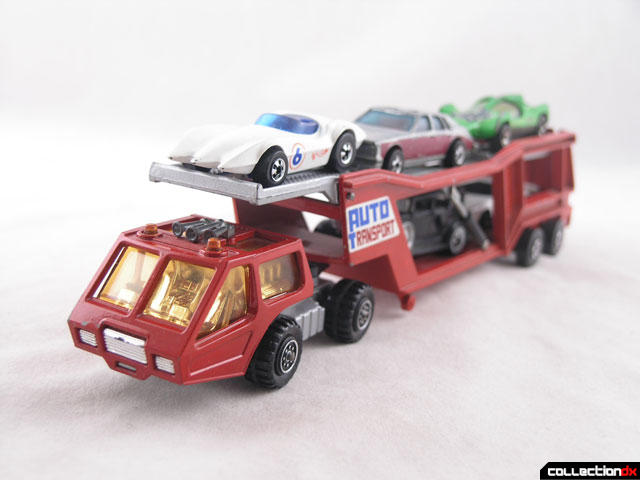 I have now come full circle, and I am not leaving this one in the driveway.

11 comments posted
It's so cool and futuristic.

It's so cool and futuristic.

He he, awesome. I always wanted one of those types of trucks; I had a ton of hot wheels. I know I had a micro machine truck like that, but the only accessory I had for hot wheels was some car wash with a dirty car that became "clean" with hot water.

Weird. I vaguely recall a friend of mine having the cab without the trailer. It was still cool as hell. I've got a box of my old Matchbox cars somewhere. The same cars, in the same case, since the early 70's. ^_^ My favorites tended to have the same futuristic vibe that this one has, particularly in the cockpit details. Some were perfect stand-ins for Lost in Space vehicles and the like.

Great story. Glad this one came back around for ya (twice!).

The design of this cab is really great. I'd like to see it with different trailers... like a fire truck type unit.

I LOVE those metal and rubber pistons, riveted into place. I had a toy of one of those little wheel loaders, the "skid-steer" or "skid loader" kind where the bars wrap around the cockpit, which had some pistons like that in a framework with multiple hinged points for realistic lifting motion, and it was fantastic to have that complexity in such a tiny package. They still make some toys like that in John Deere and Caterpillar branded toy lines, and they usually have nice use of metal, great paint, etc.

The contemporary Matchbox "working" vehicles aren't so great. But they recently did a nice small car carrier truck, the type that tilts its bed and has a plate that slides out.

I tell you, great story, Josh... of course they toy itself is great... if only it could transform...

Awesome review, Josh. I can totally believe the part about finding it at Matt's house. There is no toy you could tell me you found there and have it surprise me.

As soon as I saw it, I had these shivering feeling.

Memories of this had just slipped away, but as soon as I glimpsed at the opening shot, it all came back. I used to own this. It's one of those (very few) toys that got thrown out as I grew up, probably because it had been abused beyond recognition. My mum's cousin lives in Scotland, and in the 70's my toy box was chock full o' Matchboxes(I'd say they were waay more popular than Hot Wheels this side of the pond, in Italy, at least until the early 80's).
Thanks a whole lot!
I'm so grateful you dug out such sweet memories with your review!!! Hmmm... think I'll hit the bay and see if I can get one...

This was one cool thing growing up in the tail end of the 7T's, I loved all these futuristic diecast toy trucks that were released during the 6T's and through the 7T's and these kind of toys fit right in with the feel of CDX. I flipped out when I saw it on the Matchbox gallery when I was uploading Robotech pictures. Just like Japanese toys from the same era I love the funky design, colored windows, chrome interior and bright colors and diecast weight. So Super Sentai in so many ways.

BTW at this time Lesney was the manufacturer and Matchbox was the brand.

Amazing, I also had this toy long ago, but had totally forgotten about it until I saw this review. Great review, I wonder what could have happened to Doughty's.