Caesars are the highest-tech robots seen in the World War Robot line so far.  They are described as the smartest and most agile bots yet.  There are multiple Caesar variants, featuring either flat or domed heads, and one or two shields.  Caesar was also the first release in the LUX3A sub-line of higher-end figures. 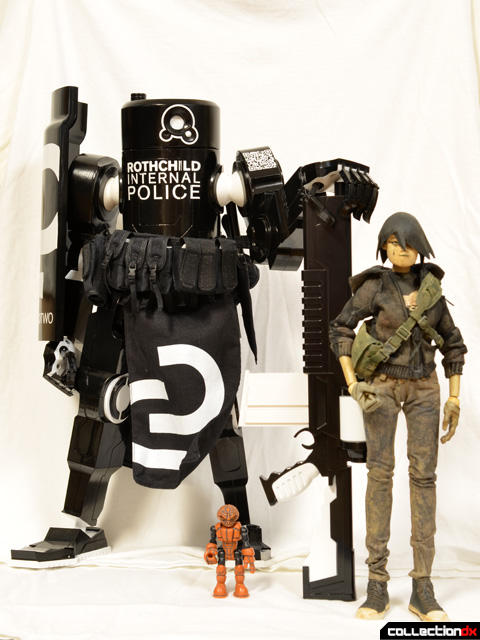 Caesar stands around sixteen inches tall, seen here with a 12” figure and a Glyos figure. I did not take any pictures of the box because it is enormous and I put it in storage, but it features the usual bold graphics and printing for each of the thirteen different style Caesars that were offered.  The figure comes in a secure vacuum tray, and the package includes a catalog and exclusive mini-comic by Wood. 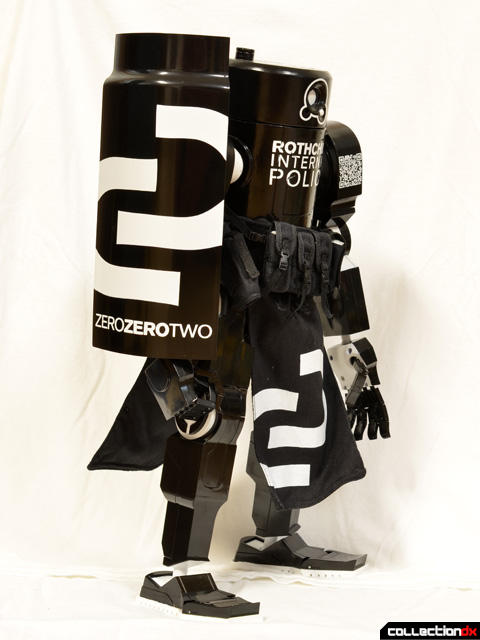 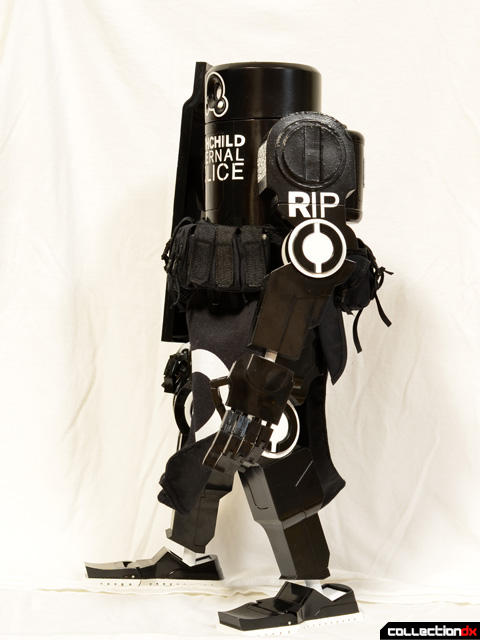 This guy is Rothchild Internal Police (RIP) 002, the second production Caesar to be built.  RIP001 and RIP002 seem to act as security for Rothchild’s facilities, and the red RIP003 is Rothchild’s personal bodyguard.  RIP002 is made from rugged vinyl and hard plastic, with a luxurious gloss finish. 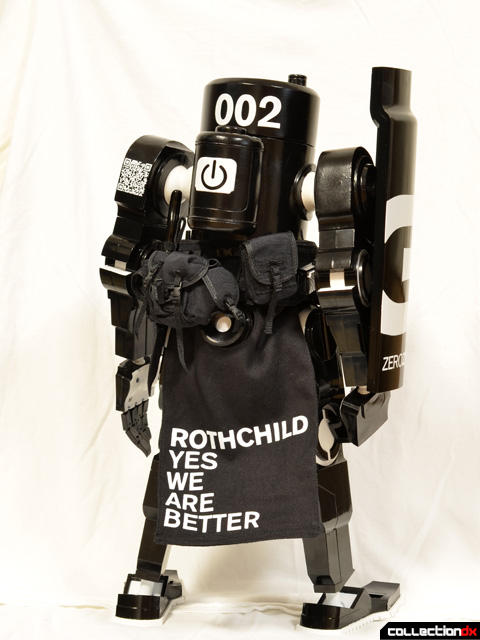 I do not usually buy the clean 3A robot releases, but something about the black and white scheme and the story behind RIP002 spoke to me.  I am glad I picked this guy, because the finish is impeccable.  A glossy surface removes any margin for error or touchups with the paint, and I could not find a single flaw on the surface of my Caesar.  The white paint and decals are all crisp and perfect, and the whole package makes for a striking design with its bold corporate markings.  This is a showpiece machine that can still deal out some hurt. 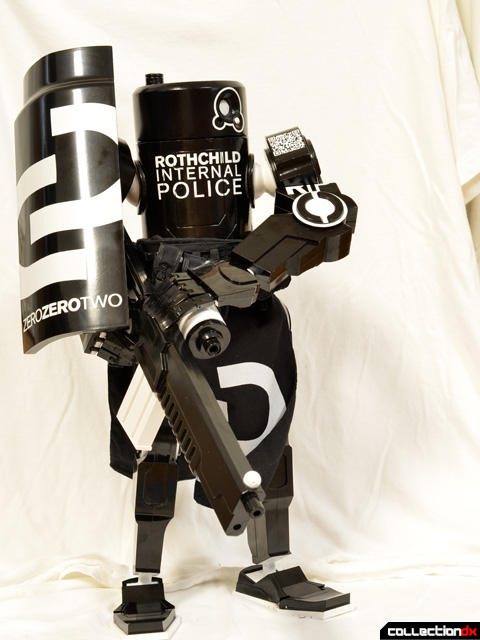 Caesar features fantastic articulation, especially for such a huge figure.  He has ball joints at the hips, ankles, wrists, waist, and double-ball shoulders, as well as the shield mount, and individually ball-jointed fingers.  Other articulation includes the neck, knees, toes, elbows, and biceps.  The articulation is bananas, and Caesar can do most anything you can come up with… 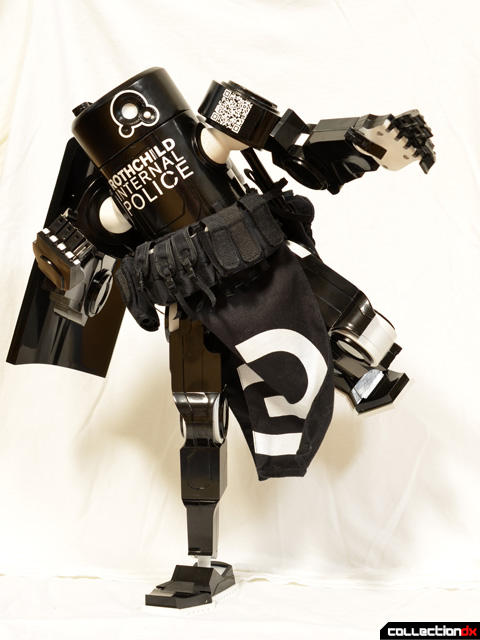 …including balance on one foot!  The joints are snug but not difficult to manipulate, and manage the weight of such a large figure well.  The shoulder balls are a little loose on mine, but if I mess around with them a bit, I can find a tight spot and make it work.  I expect on more heavily painted versions that this will be less of an issue. 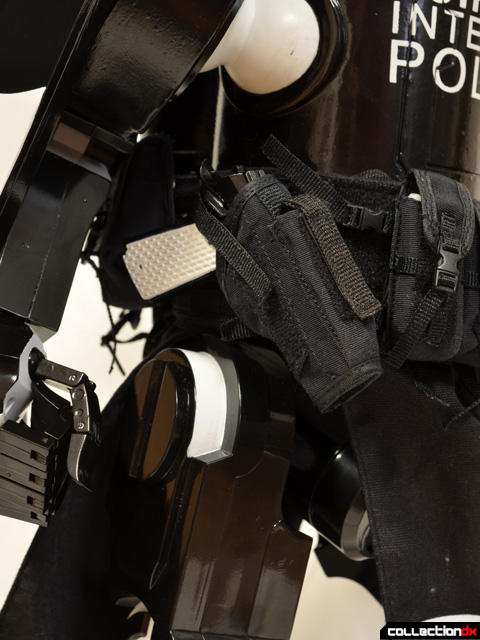 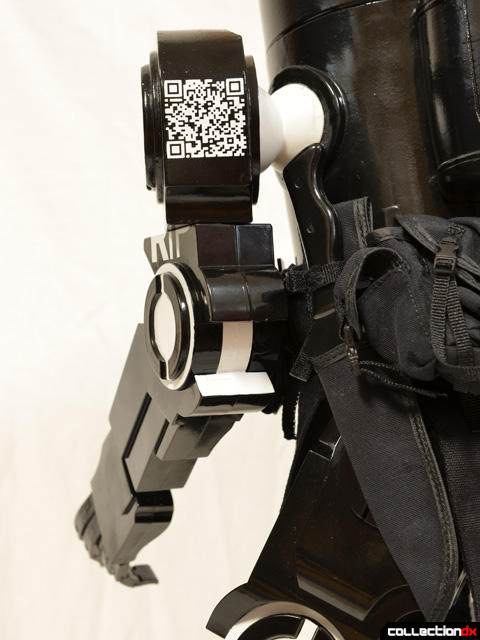 Caesar features a cloth skirt and webbing setup similar to the Dropcloths, with working clasps, multiple packs, and a wire on the bottom for posing.  Included on the webbing are a pistol and Harmonic Knife in their holsters, standard to all Caesars. 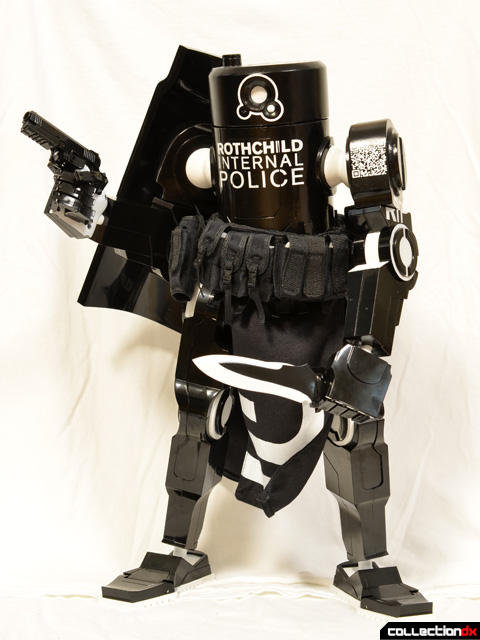 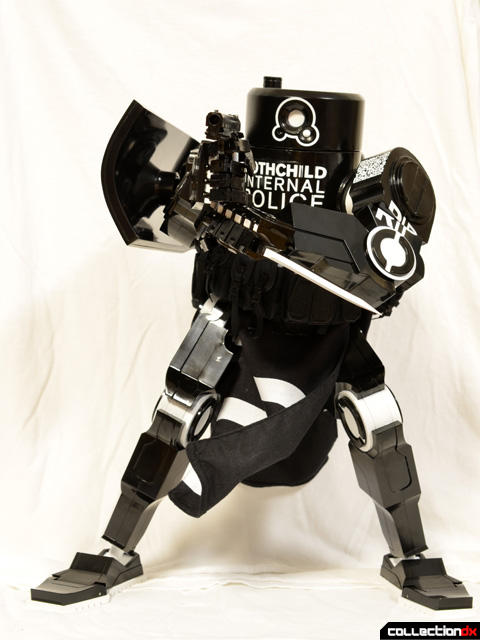 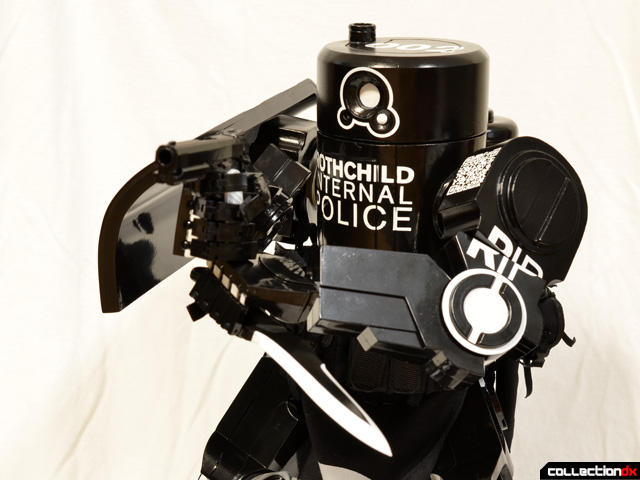 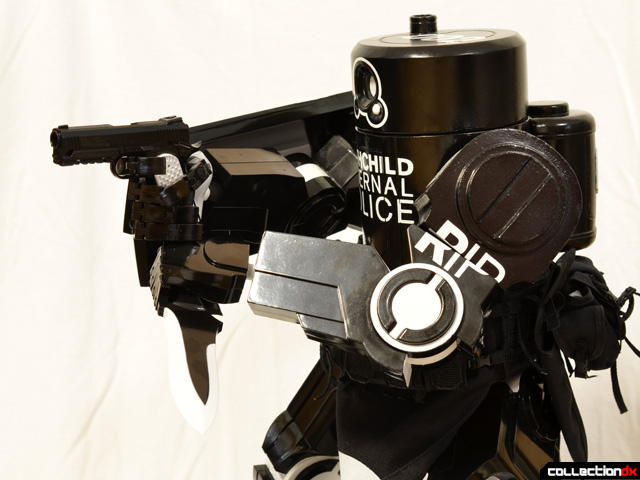 Thanks to the individually jointed fingers, Caesar can get a convincing and secure grip on his weapons.  RIP002 features the flat head, which makes the figure a bit brutish looking, so I like the idea of this unit stalking around with pistol and knife dealing some close-quarters death on things. 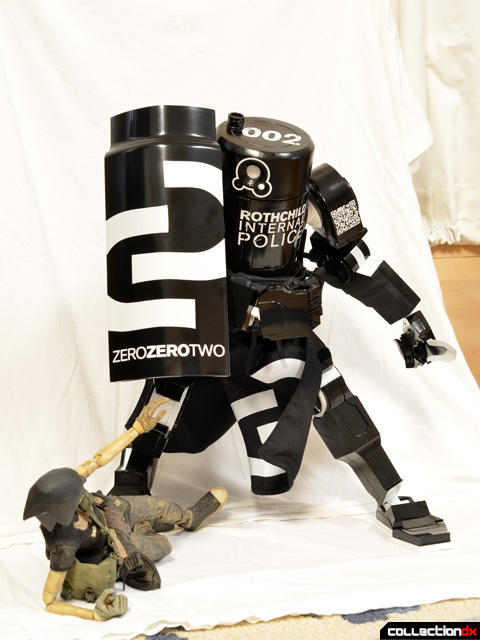 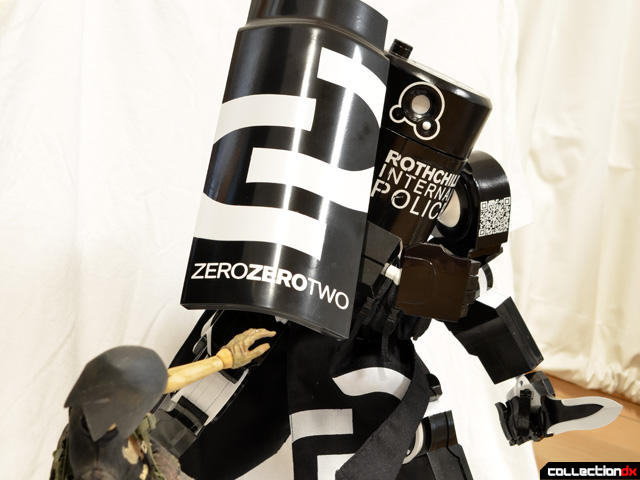 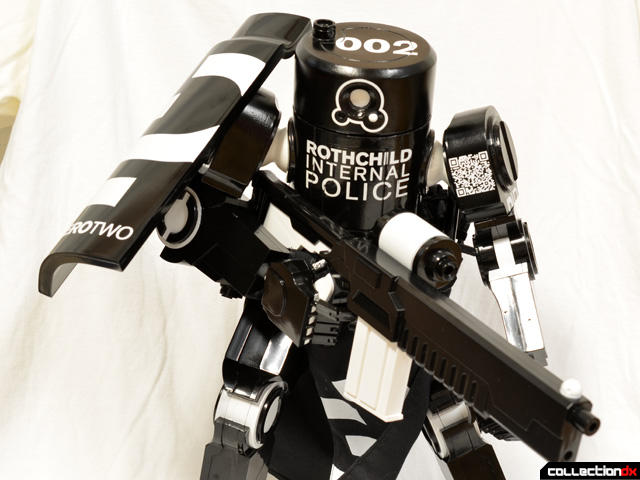 RIP002 also includes a massive Bertie SMRTGN, a big futuristic looking rifle with its own miniature targeting system on the end. 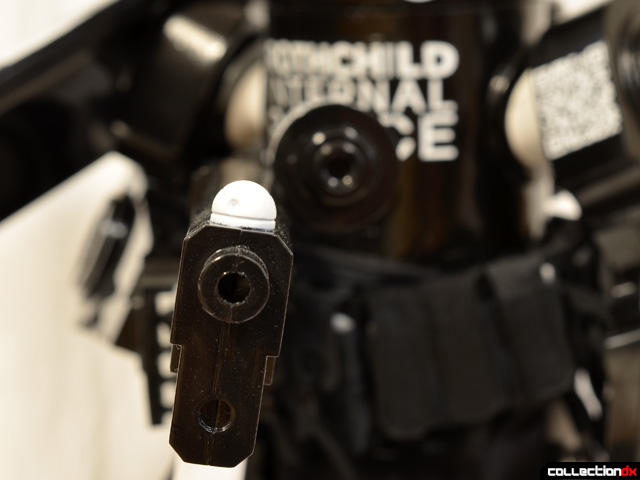 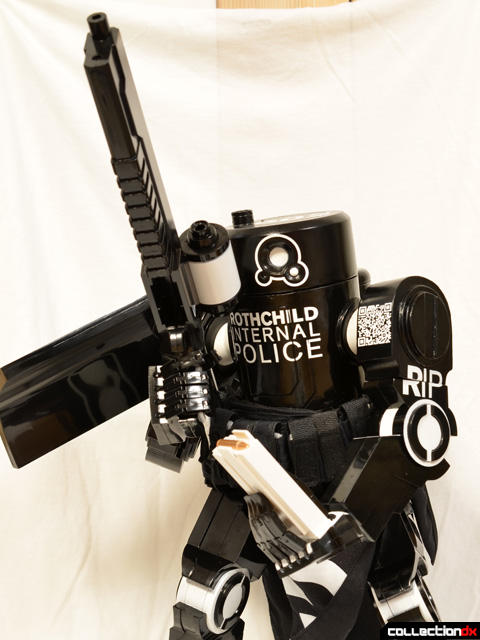 The SMRTGN also features a removable ammo clip with a painted bullet.  The clip fits in the gun securely, so no worries of any accidents. 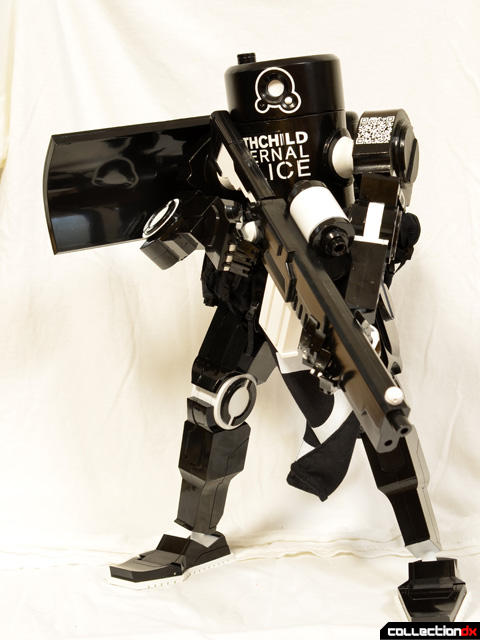 With individual fingers and those double ball jointed shoulders, posing Caesar with the rifle can be a bit fiddly, but once set up it looks incredible.  The humanoid movement and aggressive proportions combine to cut a deadly silhouette that is complemented by a dangerous-looking sci-fi gun. 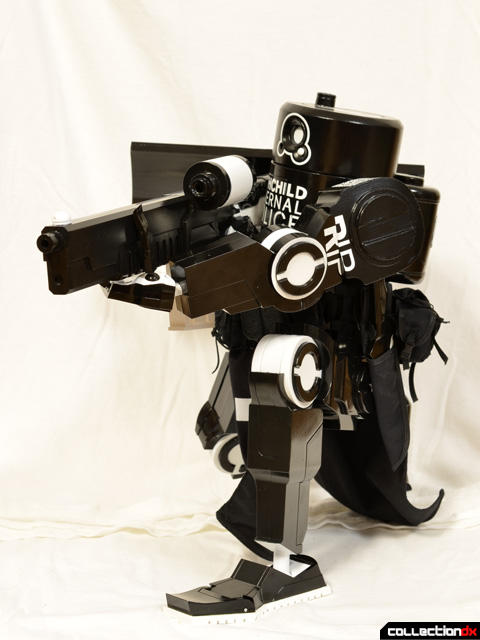 Oh, and, Caesar can kneel.  The knee doesn’t quite touch the ground, but thanks to the ball jointed ankles and toe joint, he can balance. 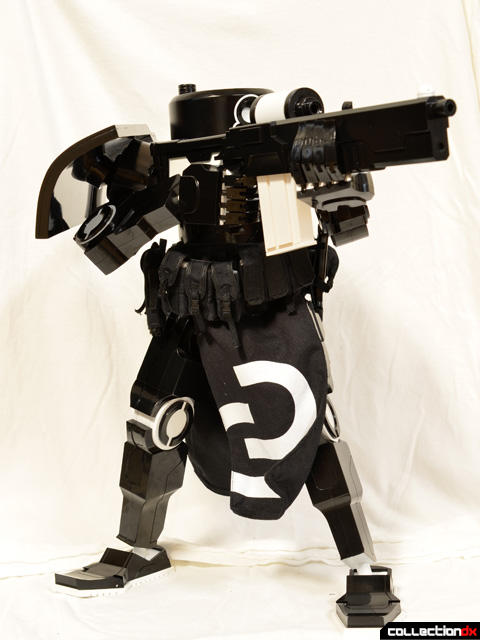 Besides being impressive and good looking, Caesar is a downright fun figure.  Some of the other WWR designs are not very dynamic due to their exaggerated proportions or stumpy legs, but Caesar combines the dorky WWR robot aesthetic with a more humanoid form to make for an excellent robot toy with a fantastic range of motion.  Whether it’s taking aim… 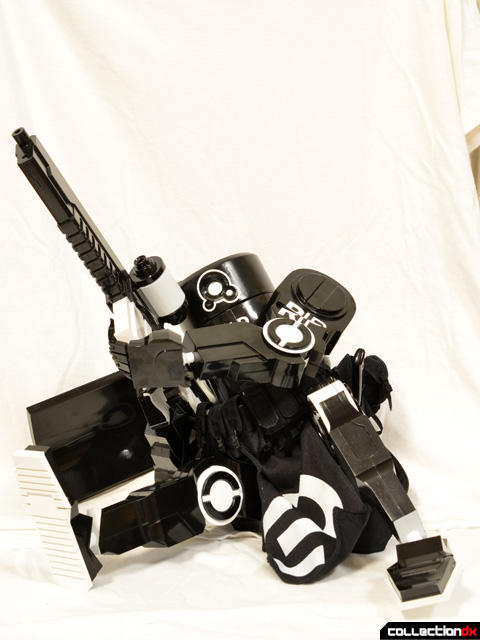 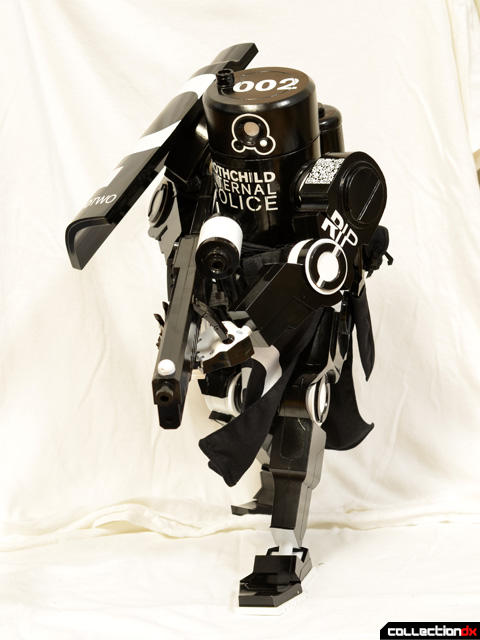 …or charging an enemy, Caesar looks awesome and is fun to handle. 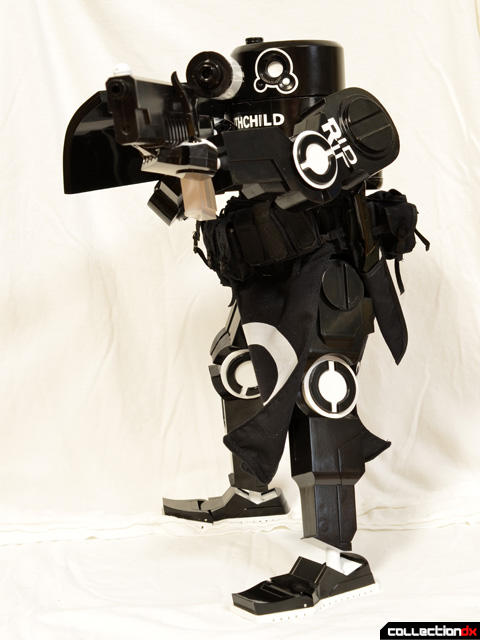 Real talk time.  Caesar retailed for $230 and took nine months to ship, four months behind the estimated shipping date, with only a partial rollout so far.  Shipping delays are something that comes with the territory of collecting 3A toys, but it’s still something that needs to be mentioned.  I was annoyed when they missed the January date, and then didn’t think about it for a few months, and then was blown away when the figure finally arrived.  Frustrating delays aside, Caesar is absolutely worth the money.  The fit and finish are the best I’ve seen on a 3A figure yet, and I cannot wait for my weathered Desert Caesar to ship supposedly in June.  The Caesar release featured thirteen different color versions, plus a DIY blank version, and was exclusive to 3A’s direct ordering site, Bambaland.  The number of versions offered and the extensive delay suggest to me that 3A bit off more than they could chew with the release, which is something people had been hoping they would have a better handle on by now.  I am just glad the end result was worth the wait, since all I really care about is the final figure in my hand. 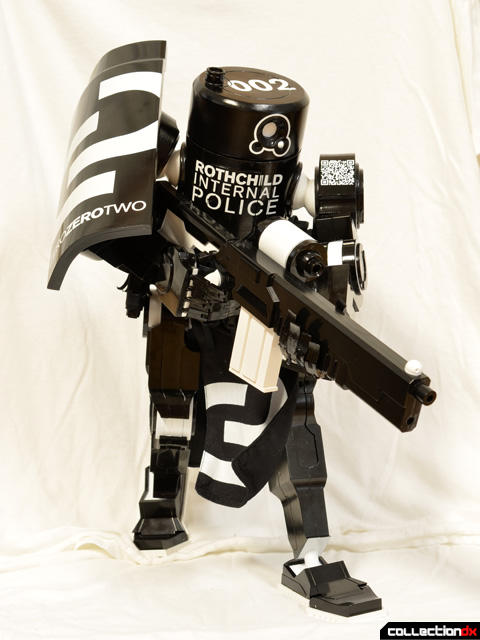 WWR Caesars are long sold out and only available on the secondary market, but there is a glimmer of hope.  WWRp 1/12 scale Caesars have been teased for a late May release.  A 16” figure is not for everyone, but an eight-inch robot figure with good articulation and incredible paintwork for probably $70 could be.  I bought two big Caesars and that was a stretch, but I’ll grab a whole lot more in the small scale, and if you are interested, keep your eyes on the 3A Production Blog for details about the release.  If you do pick one up, add at least two months to the shipping date, and forget about the figure for a while.  I don’t like to sound too advertise-ey, but I always get asked how to get these figures after I write about them, so I wanted to give people a head’s up for once.

awesome review. i dont think ive ever seen a WWR review here. i love the robots, hate the delays. if these guys were ready made and sold, more people would be singing a happier tune. i know i would. thanks for the review!

Thanks. I've written a number of 3A reviews so far, and there's more coming.

I go both ways on the preorder thing, because I can totalll see 3A's argument. By offering preorders at a set time for a set duration, you give everyone an equal chance to buy, and guarantee you don't over or under produce. The problem is, if you aren't getting stuff made in a timely fashion, then the preordering system looks less attractive. 3A could be producing first and then offering finished goods, but then they'd have to guess production numbers and I think a lot of releases would be much harder to get.

With that knife and gun, he looks ready for some CQC.

3A stuff never last on shelves. they got a good product, and if available- people will snatch it up fast. make it and people will buy, 3A.