Buses are pretty much everywhere. The only place you won't find them is in our Transformers. Oh sure you could scour the TFwiki and find oddities like Bendy-Bus Prime and Busby, but they don't have toys so they don't count. Machine Robo had a bus but it's kind of small and obscure. There was also the German produced Robobuz that I'm pretty sure was never released.

So it is through the magic of Chinese toys that I bring you Bus-Bot. 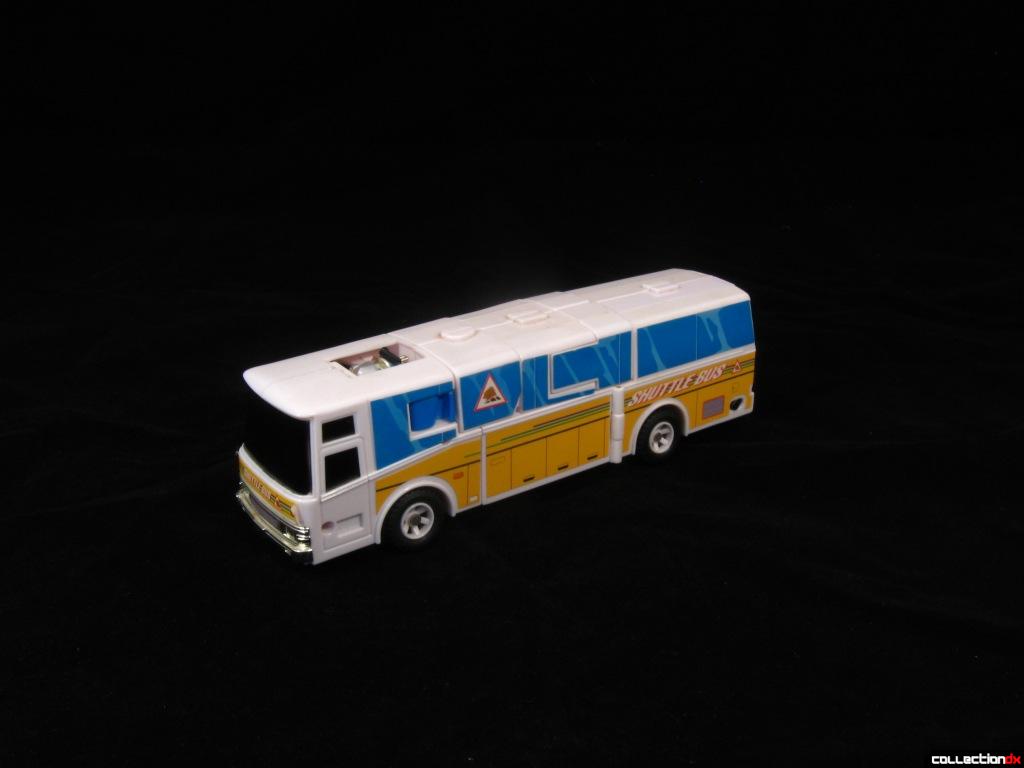 Bus-Bot is well, a bus. A bus with an obvious robot head visible on top. 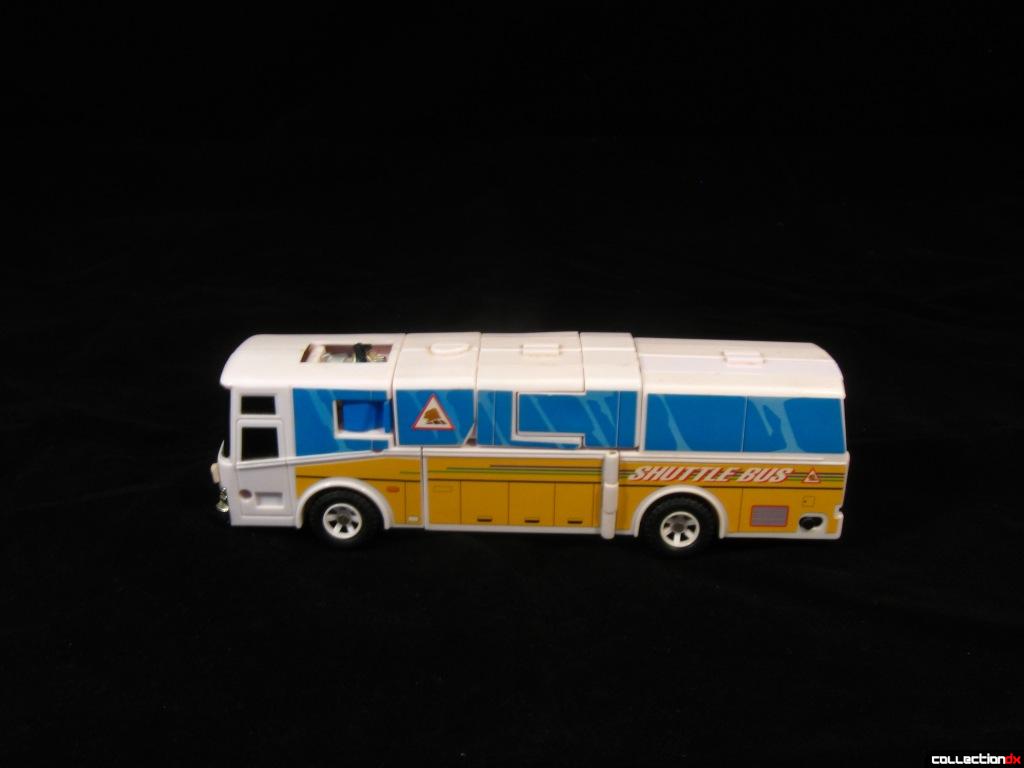 All things considered it's a pretty nice bus. All the windows and yellow side details are stickers so it can feel a little cheap. 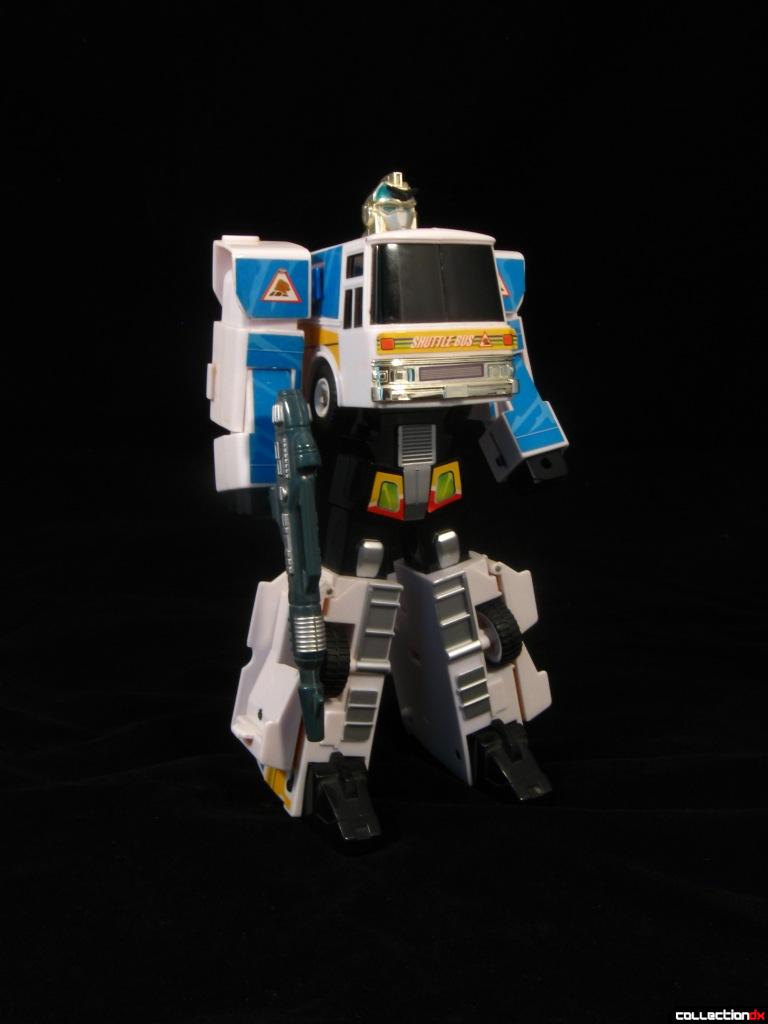 In robot mode Bus-Bot shows that it is from the same semi-cohesive family of transforming robot toys that have Gundam heads and turn into things like tractors, trucks, motorcycles, and dinosaurs. 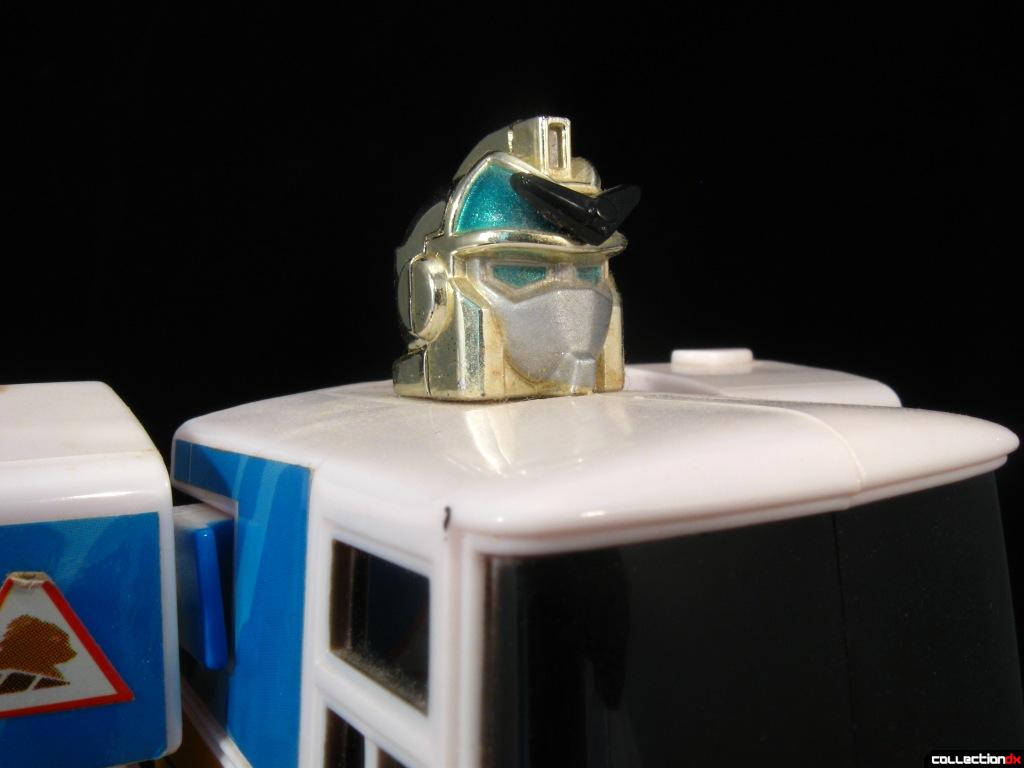 Bus-Bot's Gundam head is done up in shiny gold chrome with some silver and green for the details. 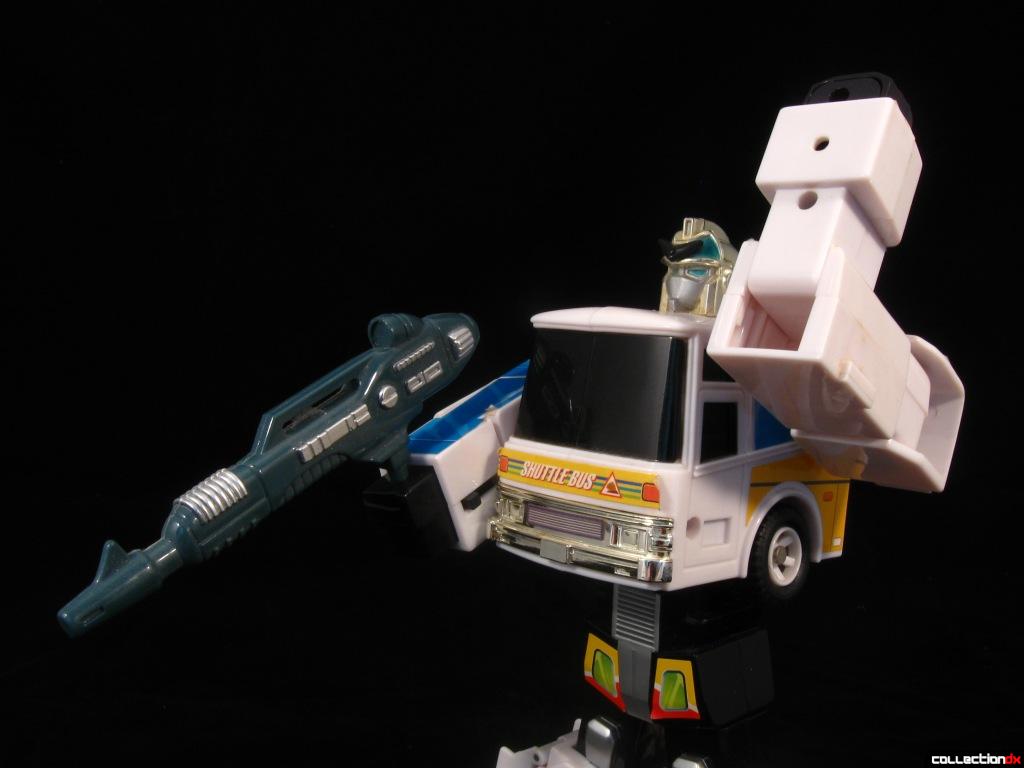 Bus-Bot's articulation is limited to its arms. His only accessory is a gun, which looks kinda cool. 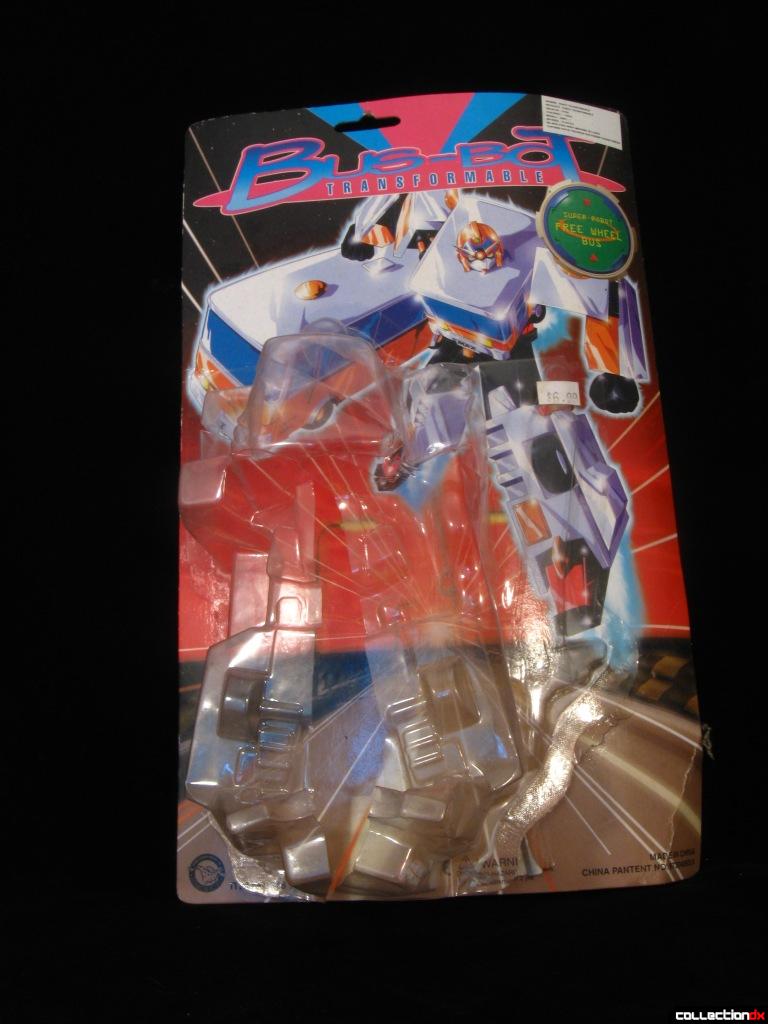 Like most Chinese toys of questionable origin, Bus-Bot came on a giant card. The artwork is so much better than it has any right to be. According to the packaging, Bus-Bot is a "FREE WHEEL BUS SUPER ROBOT" and is manufactured by Flying Dragon Toys. 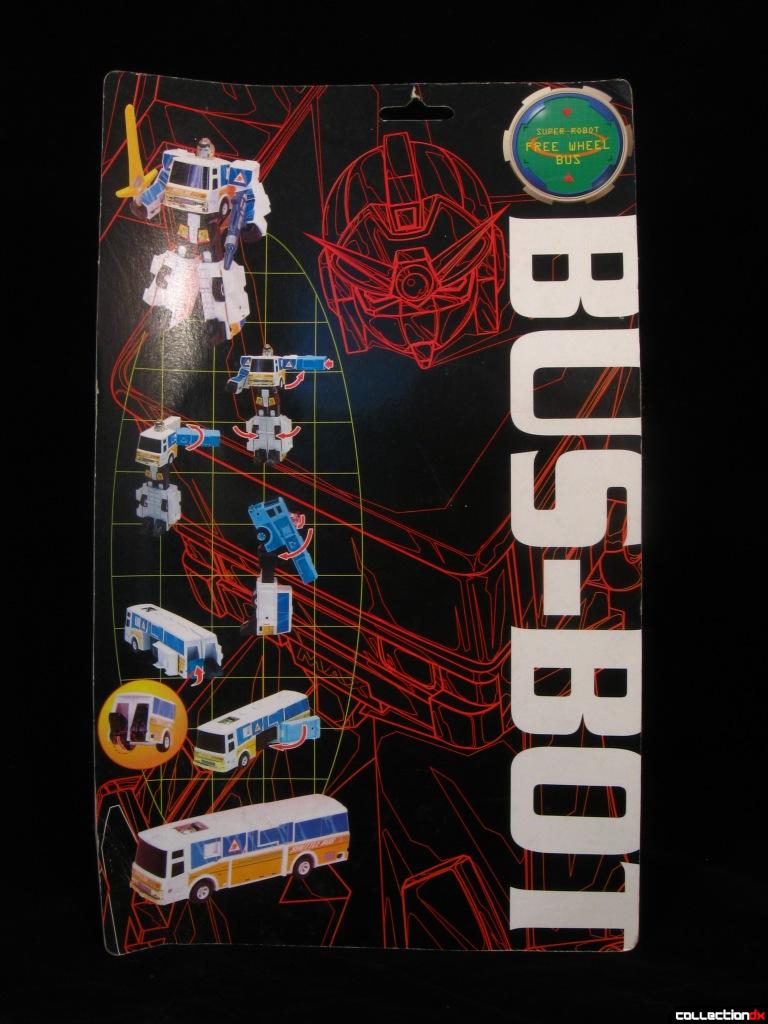 The back of the card has Bus-Bot's instructions. Also you can see that Bus-Bot was supposed to come with a sword and you can kind of see the space for it in the packaging bubble. Sadly the sword was left out.

So that's Bus-Bot. Not the most amazing transformer but it gets a lot of points for being a very underrepresented vehicle as well as a functional robot. In the end, Bus-Bot is king of the robot buses.

Although I can see where you're coming from in saying that the head/face of this toy has a sort of Gundam influence to it that's not what I see unless I really look closely at it. At first glance and even after that I really see a bit of an Optimus influence rather than a Gundam influence, I guess it's that mouthguard that makes it look like Optimus to me.

Gundam also has a mouthguard. Optimus' head was clearly inspired by Gundam's and Gundam's head looks like a samurai kabuto with a mouthguard.

I had this guy and thought he was great. I also had the train bot which has a very similar transformation IIRC. Good piece!

That Robobuz is still not out pains me greatly. If it really ends up canceled that would be heartbreaking.
Anyway, I love this. It scratches both my public transport robot and Chinese "toy" itches. I can't express how much effort I'll put into getting one of these (A: Enough to find one). Though, I'm kind of surprised that it doesn't have a red LED or sound effects (or both). I also love that not only does Bus-Bot just stare up at the sky in bus mode, the card illustration tries to pass that off as some kind of actual detail on the bus.

Yeah, I wanted a Robobuz too!

They uploaded a new side-scrolling Flash game last year (far better than the original 3D third-person driving game), and for one reason or another I can NOT get past that last level with the volcano!