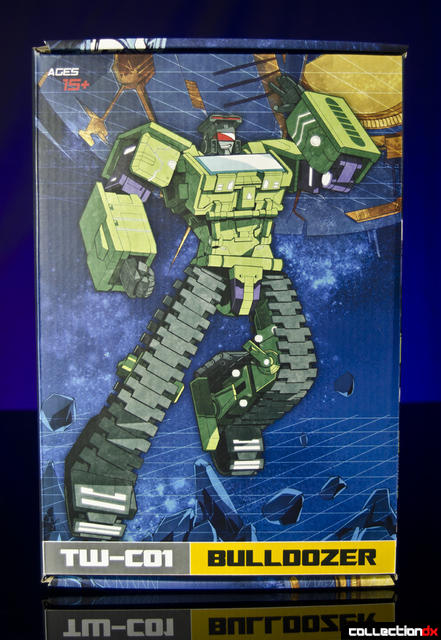 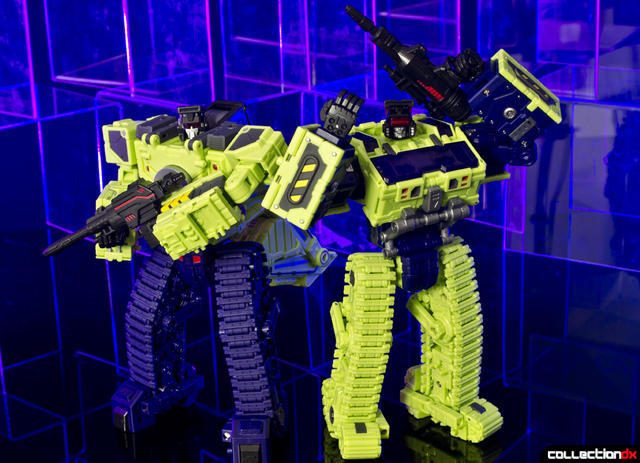 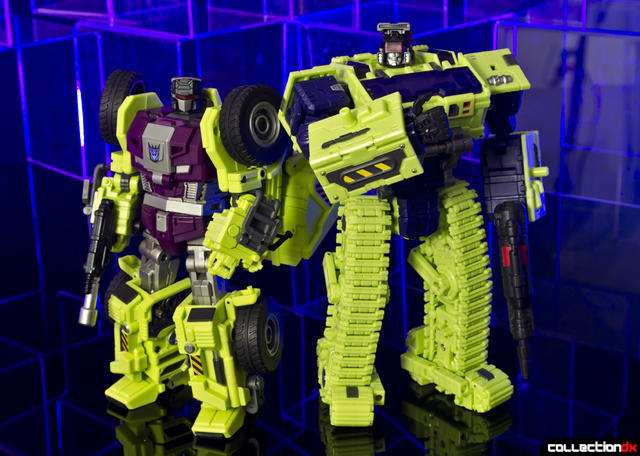 As with Unearth, Bulldozer sports an impressive level of articulation, particularly in the arms. He can easily hold his weapon with both hands. 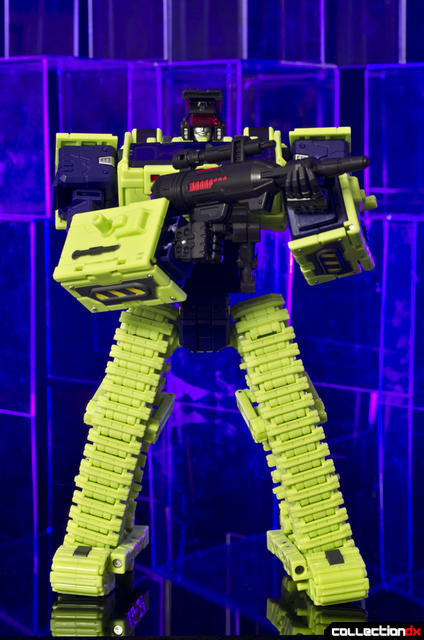 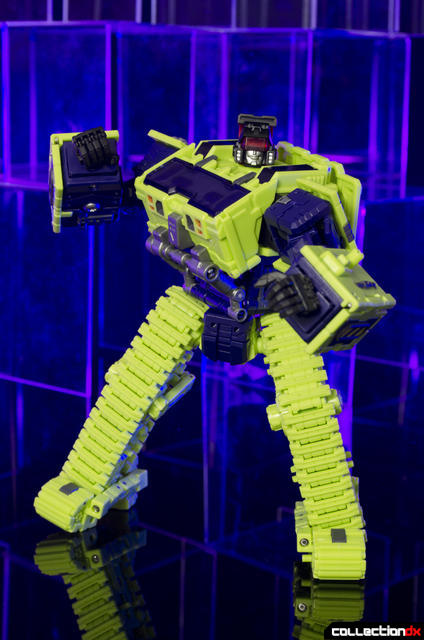 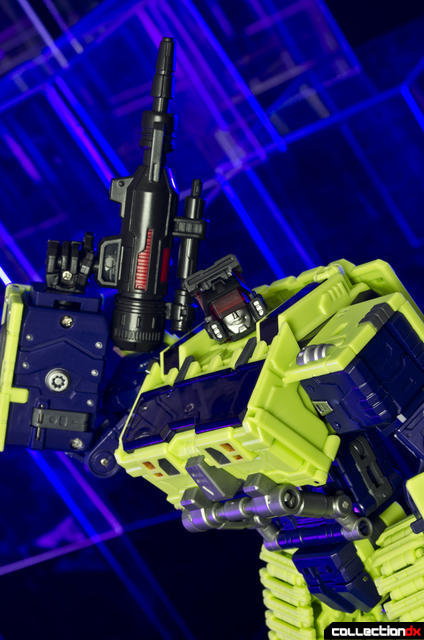 Bulldozer uses the exact same legs as Unearth, just with new feet. That means that he shares the lack of thigh swivel, but again, its not sorely missed. 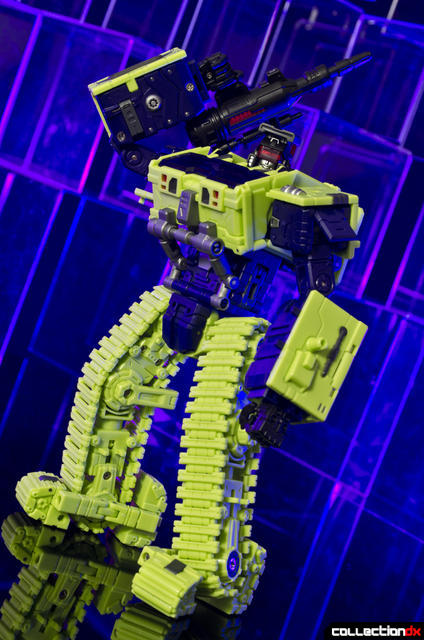 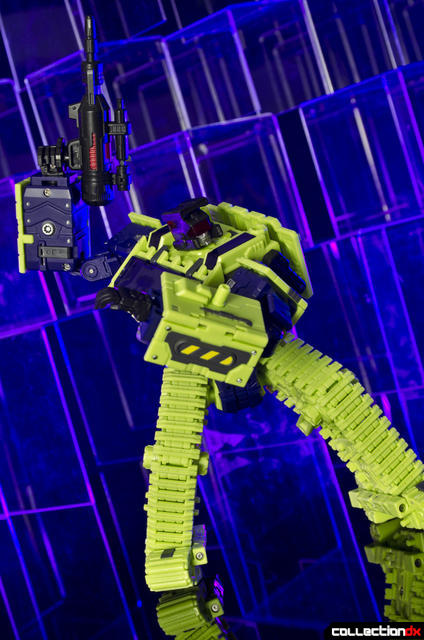 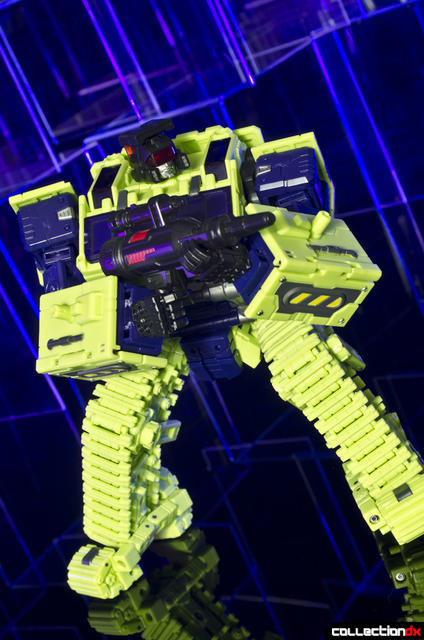 The same cheat used on Unearth to get more range out of the hips can be used on Bulldozer. 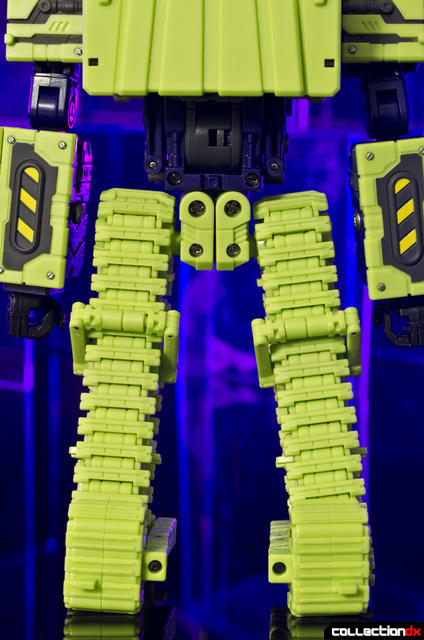 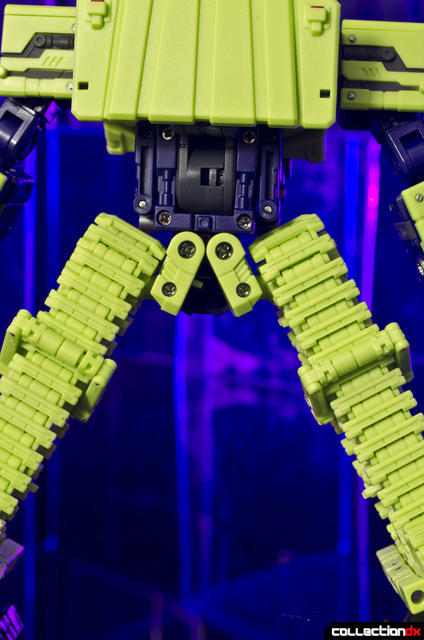 Another cheat that Bulldozer shares with Unearth that I didn't cover in that review, is that the robot mode bicep's use a double swivel joint to compress into the forearms for alt mode. The way this double swivel joint is setup allows you to adjust the length of the arms to suit your taste without hindering the articulation. 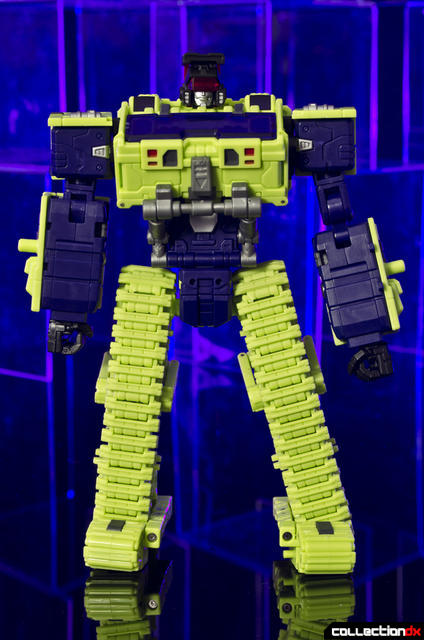 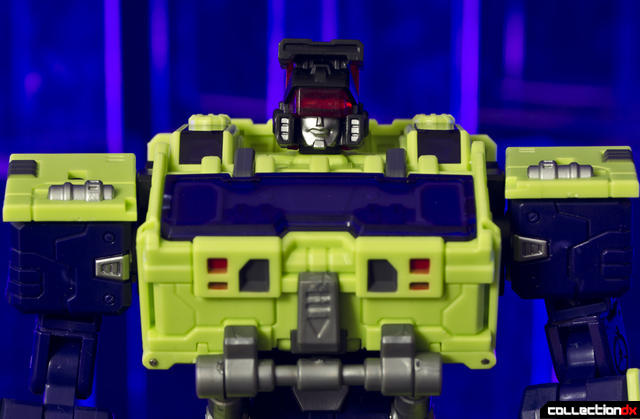 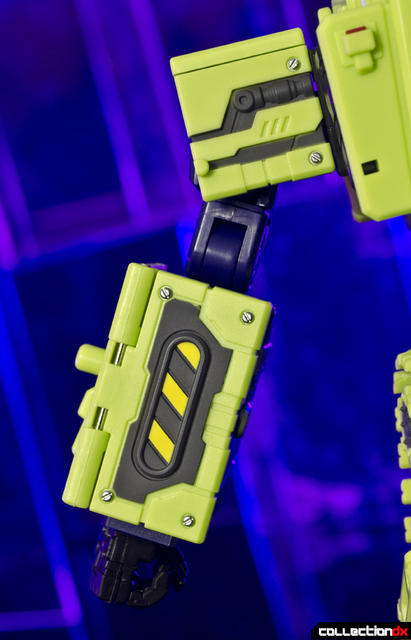 Where as Unearth had an ungainly amount of back kibble, Unearth strikes a very clean profile. 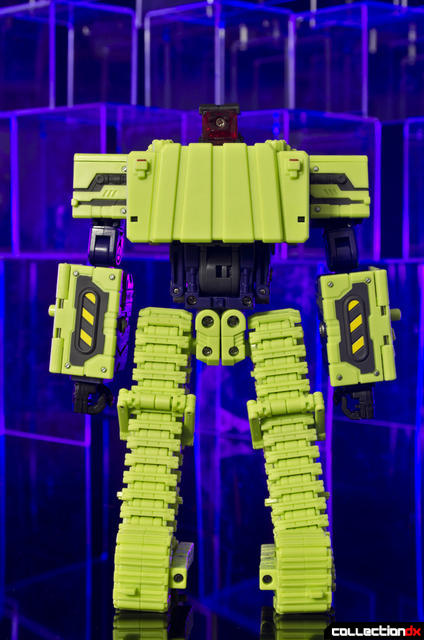 Bulldozer has a large clear plastic panel on his chest that can be removed to reveal extra mechanical molding, paint apps, and a spot for a faction symbol underneath. The chest is also the source of my only real complaint with the figure aside from the lack of paint on the legs. The chest is made up of the alt modes scraper blade and secures via two small latches. The problem is that when pressure is put on the chest, like when you're gripping the toy to move its arms for instance, the chest likes to come unlatched. It's a minor annoyance, but an annoyance all the same. 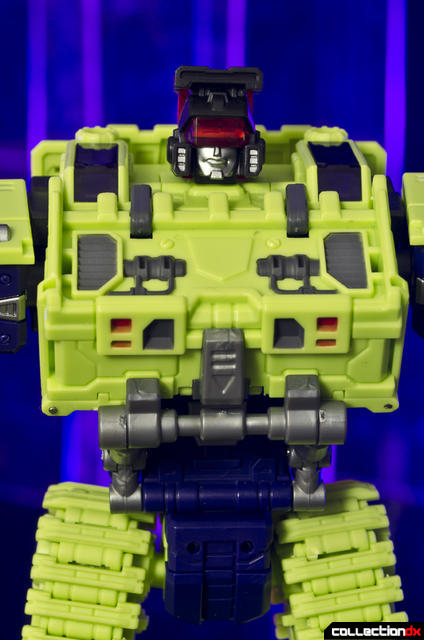 Transformation from robot to alt mode is not as intuitive as it was with Unearth, but it's by no means complex. 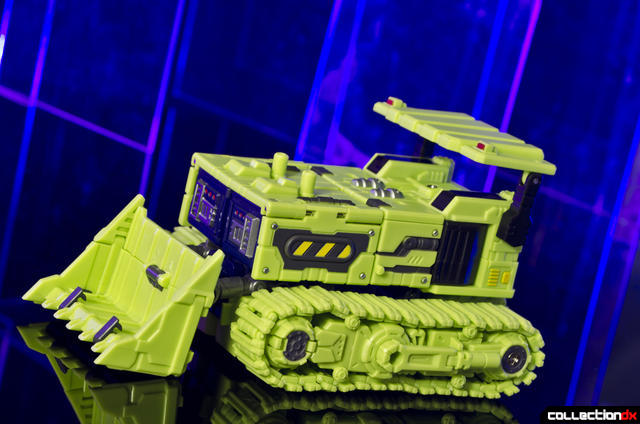 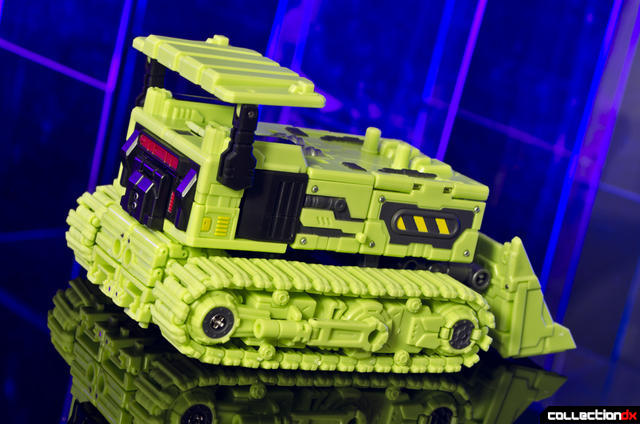 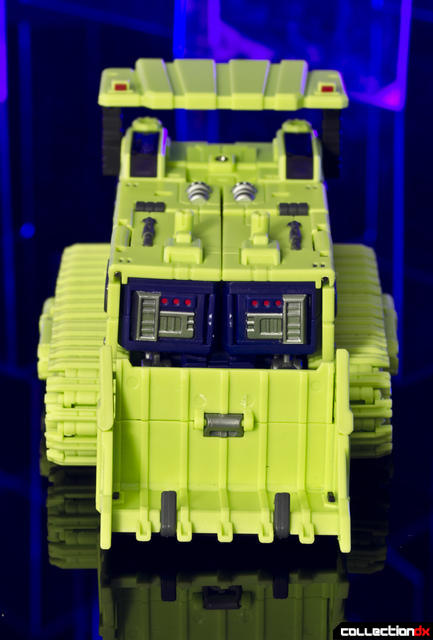 The alt mode is very detailed and sports an impressive amount of paint apps on the top half, but again, the threads could have used a few more. I'm tempted to swap the purple and green treads between Unearth and Bulldozer just to get some color separation in the legs. 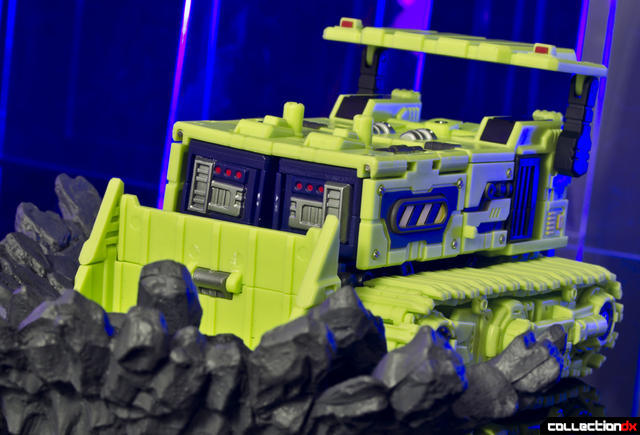 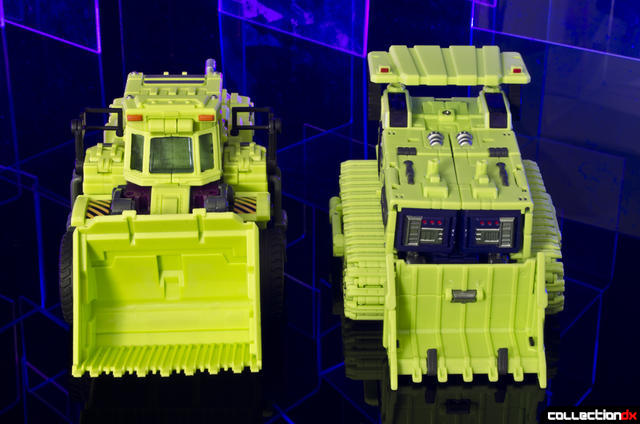 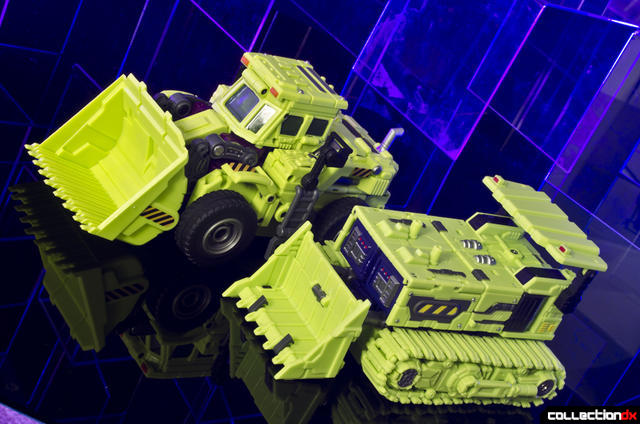 The combined mode is essentially the same as it was with Unearth with the exception of a modified connection between the robot and forearm. 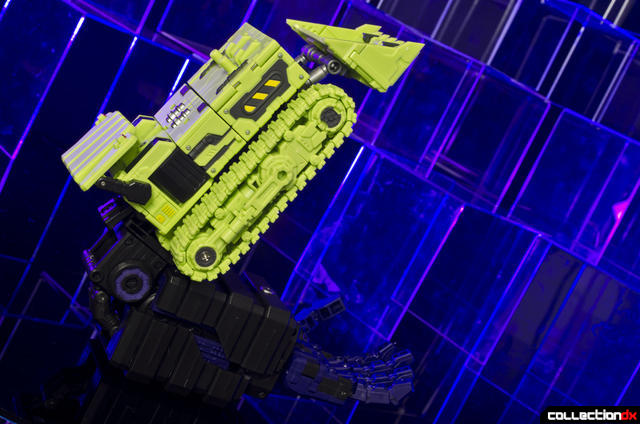 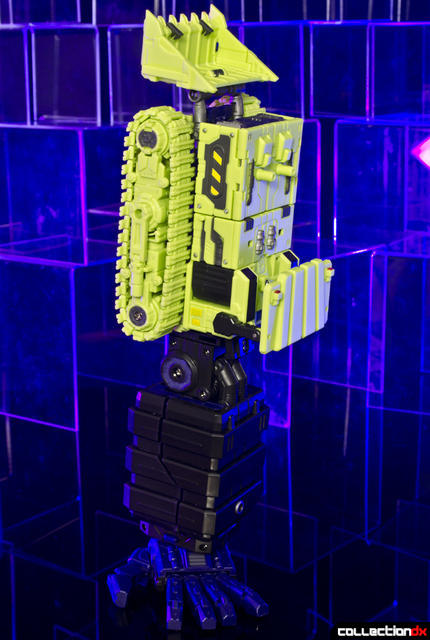 Although technically, the combiner parts dont do anything outside of combined mode, they can be pegged onto Bulldozers robot mode arms as kind of make shift weapons. 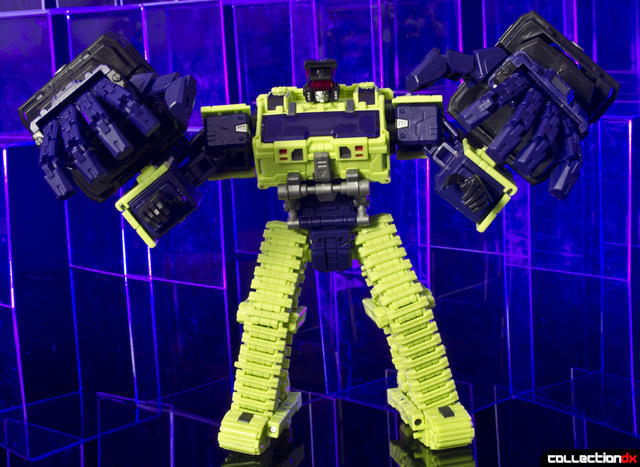 As much as I liked Unearth, Bulldozer is even better. He is 8 inches of chunky robot goodness and aside from his chest that likes to comes unlatched, and sparse paint on the legs I really, REALLY like him. The Toyworld Constucticon team is one of those love it or hate it designs, but for me it's the perfect pairing of design and engineering. 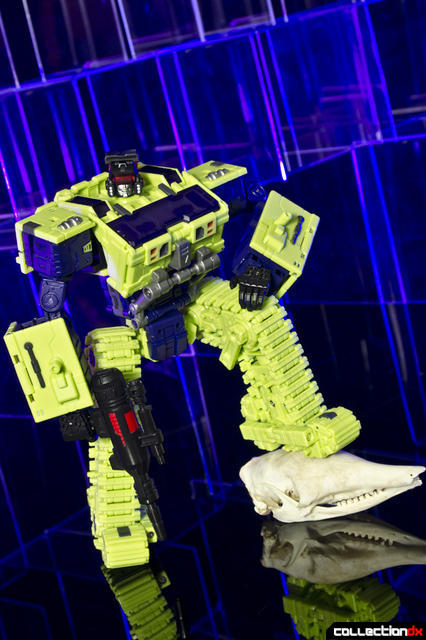 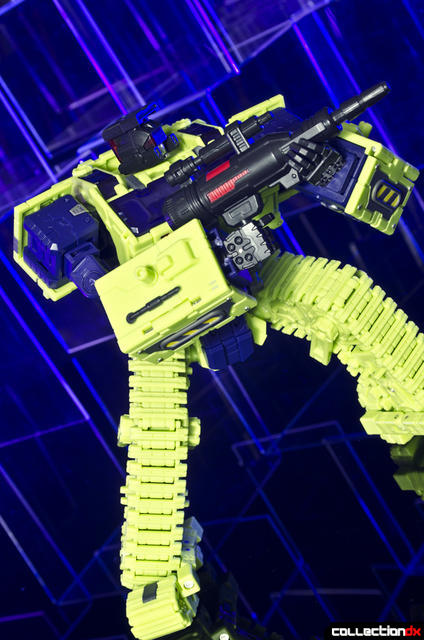 15 comments posted
Who would hate this design?

Who would hate this design? Is it because they don't like the constructicons from the cartoons or comic books?

Personally, I don't particularly like Toyworld's take on the Constructicons. They, and a lot of other third party Constructicons, tend to oversimplify the vehicle mode into just a box on wheels/treads in a way that is at odds with the gobs of surface detail they sculpt on the figure. It's especially egregious on the Toyworld version, because they based their Devastator design on the Studio OX version, which was already nicely detailed. Honestly, I feel like the current official toys for the team has done a much better of job of marrying realistic vehicle modes with cartoon accurate robot modes (save for Long Haul).

Some excellent points but these bots scale better with MPs and the final Devastator is bonkers in terms of size and articulation.

Transformers have been around for so long, and there have been so many different versions of each character, that you're never going to get consensus on what design style looks good.

True. I guess I'm looking at it more of a technological standpoint that it's quite an achievement both technically and aesthetically. I love the designs of the individual robots so far and the way they look and the poses you can do. Nothing will ever be perfect. As far as comparing it to the constructicons of old I look at it as TFs reimagined in a great way...a new and refreshing point of view.

I like the figure and its vehicle and arm modes, but that head just looks awful to me. Everything above the nose looks strangely-proportioned. I can't tell whether that's sculpting or a trick of the lighting.

Ah, well. Tastes vary. I'm really enjoying these reviews. Is that a ToyWorld or Hasbro Constructicon in your second comparison picture?

The Constructicon in the second pic would be Generation Toys version of Scapper.

Man I love the engineering, but I prefer gt's idw look. I wanna get both of them though. You're getting both? I saw you reviewed the gt scrapper and mixmaster.

I am getting both, yeah. Devasator and the Constructicons have been my favorite characters since I was kid. I figure if I get both, I won't have to pick between combined and team mode. I honestly think I like versions about the same. I guess I like generation toys alt modes better and Toyworlds robot modes better so far.

Damn, I wish I could get both. Looking forward to your final combined reviews, since it seems you're the only person on the internet covering them in detail.

I love your photo backgrounds, but I have to ask - armadillo skull why?

Because the raccoon skull was too big ;)

That is a fantastic answer. Thank you.