All right, last piece of big news from Onell Design before the weekend--I promise!

But ya gotta admit, this is pretty great news!

I (and a lot of other heads) have been waiting a year for the release of the latest all-new Glyos sculpt: Buildman Ranic! The Buildman represents a herculean amount of planning as it was designed, from the start, to be equal parts action figure and building toy. 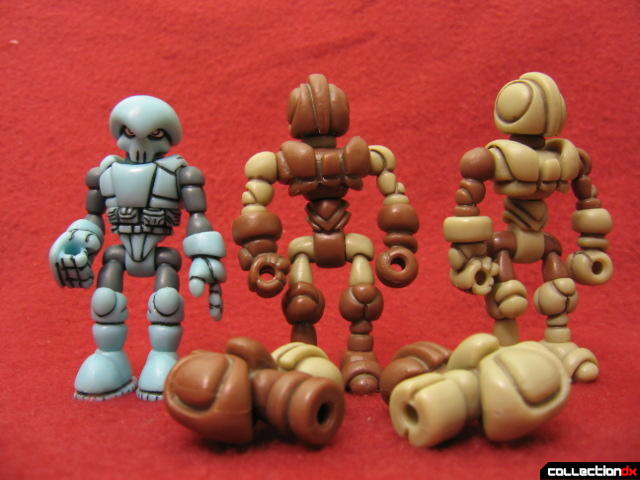 You see, Pheyden, Exellis, and the others were designed to be action figures first, then building toys. The Buildman is all construction! First of all, the other humanoid figures consist of thirteen parts, five of which are "dead end" pieces--parts that have only one connection point. With the Buildman, you get nineteen parts, only two of which are dead ends.

And the figure's still only $8. Eight dollars. Sorry, you're not gonna get a better play value than that...anywhere. 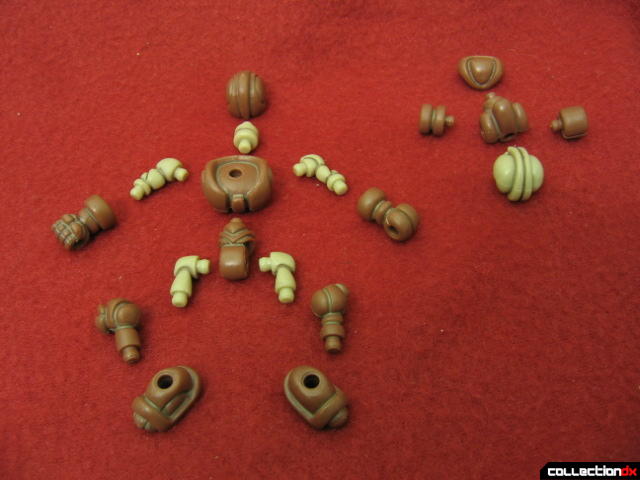 Note in the picture above the male-male neck piece! This is the first time we've seen a part like this (two pegs) in the Glyos system. This allows different head parts with all-female connectors to be able to join with the female connector on the torso. Existing "proper" heads can be used as well, of course--just remove the neck piece altogether!

Next up, if you're real sharp, you'll notice something interesting about the figure: the hands, upper arms, lower legs, and feet are actually different pieces! The figure comes asymmetric! As you'll start to see, there's a *lot* of potential for variation with these figures. So, if you got two primarily tan Buildmen, for example, you could swap up the parts and have two distinct, yet perfectly-symmetrical, figures! 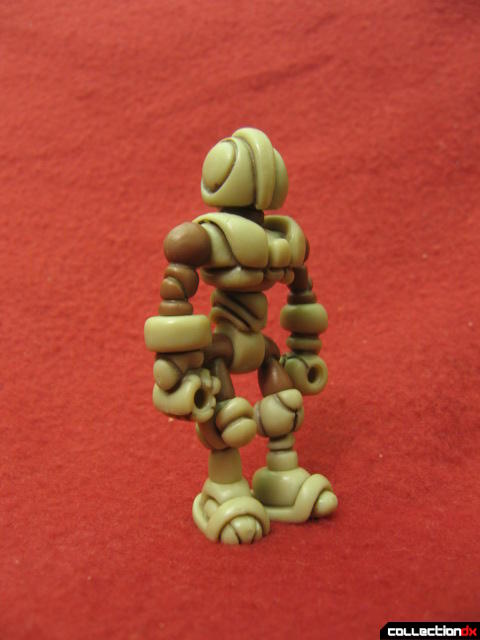 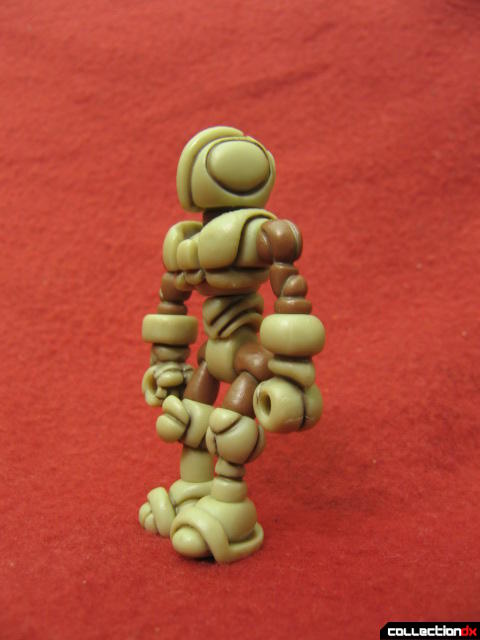 Further adding build potential is the backpack. It's designed purely for construction and figure-upgrading. The main backpack piece pegs into the female connector (hole) on the figure's back. This part can double as another chest piece, or even a weird over-sized head variation. 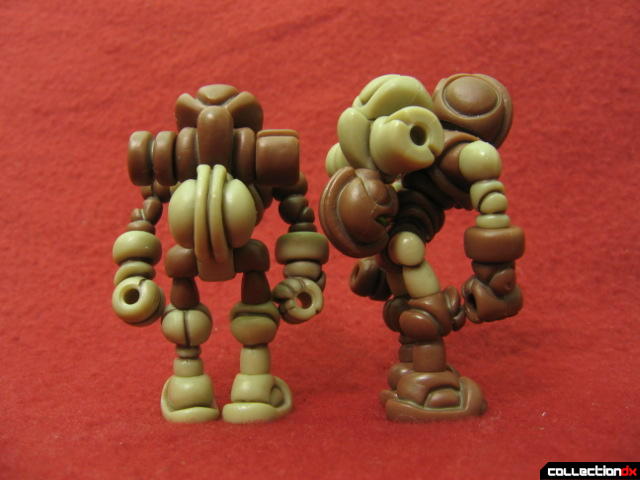 On top of the backpack, there's one dead end piece that vaguely resembles a futuristic printer or some other office appliance! Since it's a dead end, there's not a ton you can do with it, but with the male-male neck piece, it makes for a very cool alternate head (see below)! On the bottom of the backpack is the other dead end piece, another straight-up alternate head. It's a real weird-looking one with a green visor on one side and a Kamen Rider-esque bug face on the other!

Finally, there are two cylindrical pieces on either side of the backpack with male/female (peg/hole) connectors on either side. These can be used for all sorts of things from constructing basic shapes to beefing up existing figures. 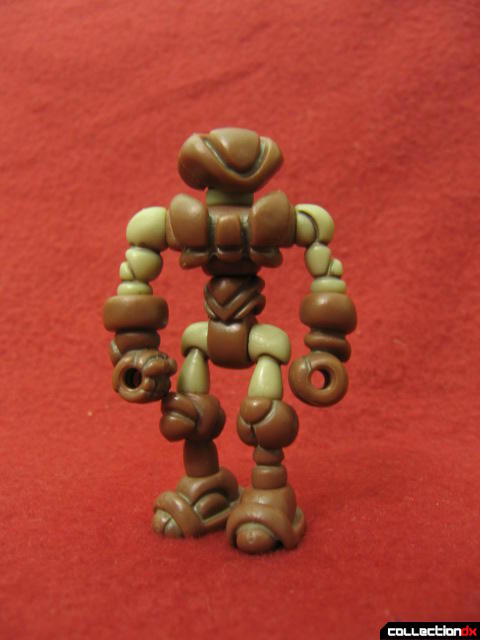 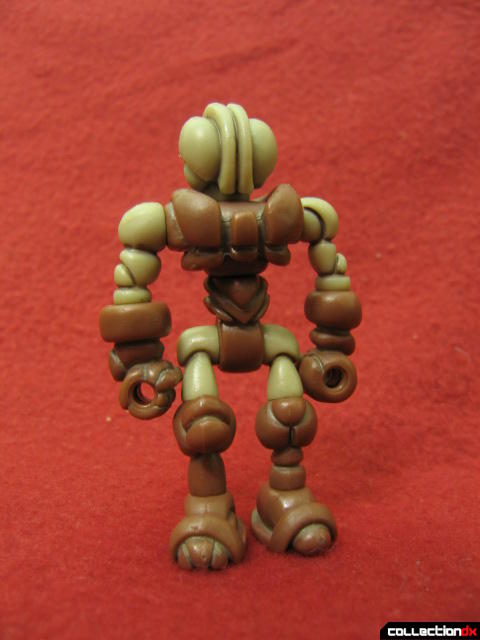 Now, I only have two of these guys (one of each colorway: Standard and Reverse), but once you get a bunch of these guys together, you can come up with some ridiculous stuff. I only took a few photos for this quick review, but if I had more time (and more Buildmen!), I'd try to pull off some more daring customs!

Just by browsing Glyos.com, I'm sure you'll get more than a hint of what's possible with these guys. And add the Phase Arm/Gobon Blaster to the mix, and you've got some potent material for building powered up figures, vehicles, or whatever your mind can come up with!

For now, I'll just leave you with a couple quick mash-ups I did: 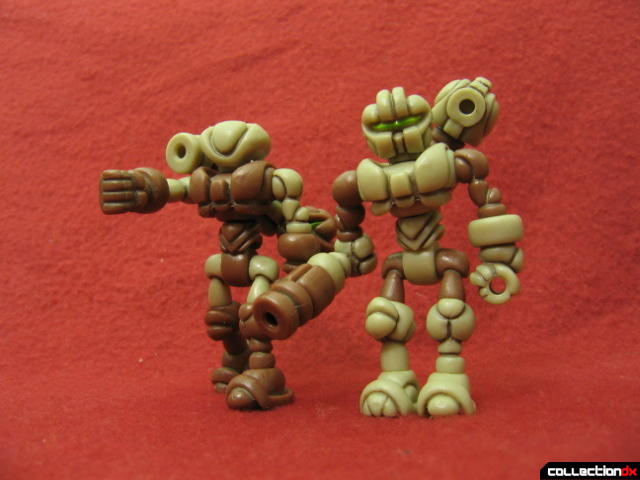 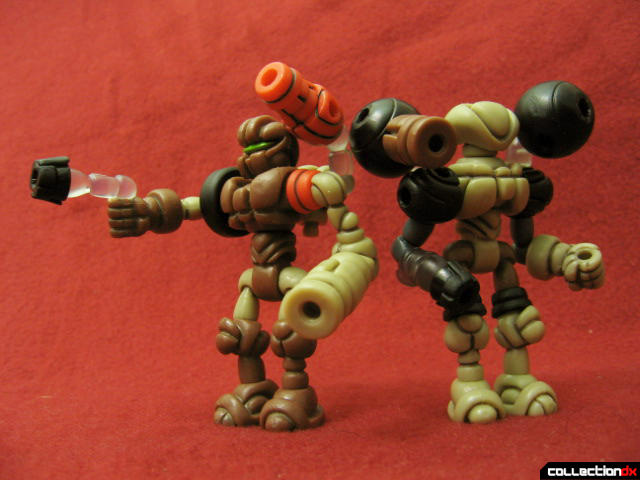 Note the use of the green visor head above, and the added Phase Arm and Gobon Blaster bits!

As with the Phase Arm/Gobon Blaster, just imagine the possibilities when these get released in different colorways! Glow? Translucent? This is gonna be a very hot toy!

All right, now go order some Buildmen and start creating! Better yet, head to the Rocket North booth in the independent press section at the New York Comic-Con 2009 this weekend, meet Matt Doughty of Onell Design, and pick yourself up a handful of Buildmen, Phanosts, and other Glyos figures!

12 comments posted
I saw these the other day

I saw these the other day when I went to check out the Onell site to see what all the hubbub was about... I'll definitely be picking up two or three of these this weekend along with one of the crab guys at NYCC.

Cool...well, I'll be there too, with Nekrodave. Chances are decent that we'll be at the Rocket North booth, too, so just ask for us!

Fantastic! I'd love to pick Dave's brain about vinyls... and I think my little brother's gonna get a kick out of these figures.

Cool. Though honestly, Sanjeev is much more hip to the vinyl scene than I am. I just have more time to post reviews! LOL. But by all means, if ya see us, say hi. I'll try to remember to wear my CDX shirt.

Gah... NYCC was a blast today, and I already need more Buidlmen!

Ranic is great! Need a few more. It was cool meeting Matt, Boris, & Dennis at NYCC. An extra glow Crayboth was added with the Buildmen, as well as a clear limbed, glow body Sarvos. A red/white/black Savigoth custom just called out, to be added to my hatfull of figs. Fun stuff!

Damn! Sounds like I just missed you, Jon! I just caught the tail-end of Prometheum5's (and his brother's) visit. I picked up a couple more Buildmen (one of each colorway), but didn't get that clear-limed/glow body Sarvos...though it looked killer.

I did, however, score one of the translucent blue/silver spray Sucklord figures (not to be confused with the super-glossy Dead Presidents one-offs)! There were only 20 made, but they're pretty killer! I think they were only available on Sunday, though. :/ ...Oughtta review it...

Do it! I'd love to see some more pics of the Sucklords he was working on... every time we checked in he was painting another one, and they looked cool.

Glyos by way of Sucklord? What's the deal here? Who? What? Curses! I missed some of you guys. Should've stayed around to get the cutting edge info on all this newfangled nonsense.

He was painting a figure while we were standing there talking... when I gave him back his MaK book from Roger we started talking paints.

Aiight, I'ma have to post a review of my Sucklord fig then!