From the Acid Rain World website, Bucks team is described as such:

"The Bucks Team is a special task force created by the Agurts government in 1997. Bucks Team Troopers were handpicked from the best of all Agurts military branches." 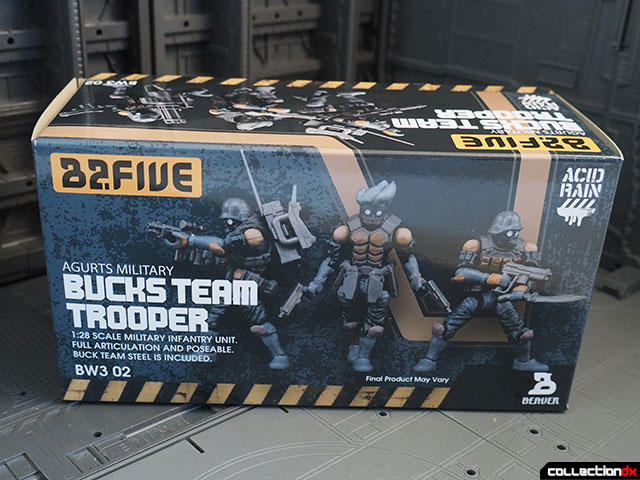 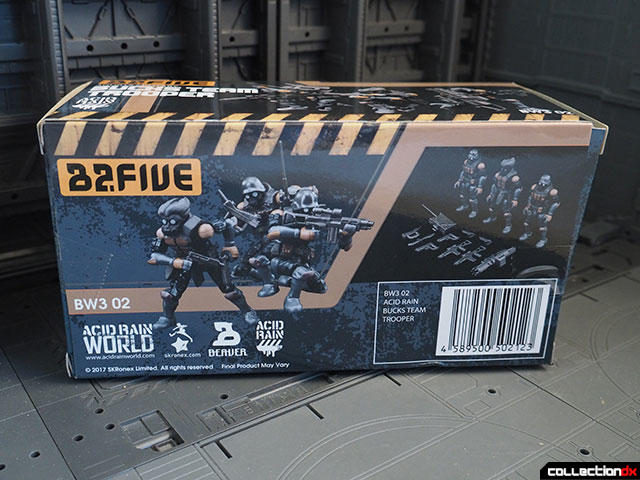 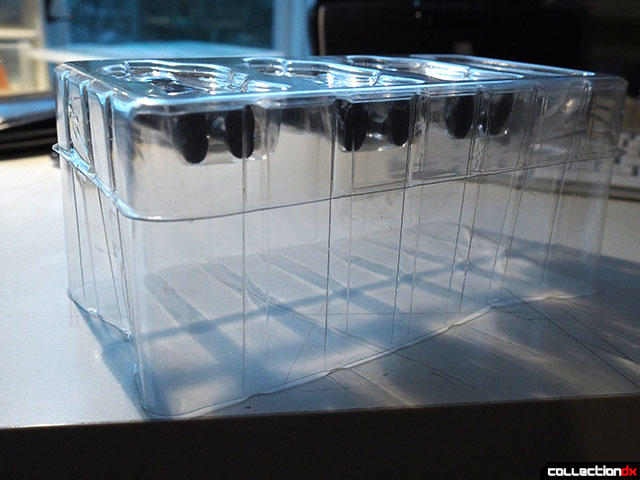 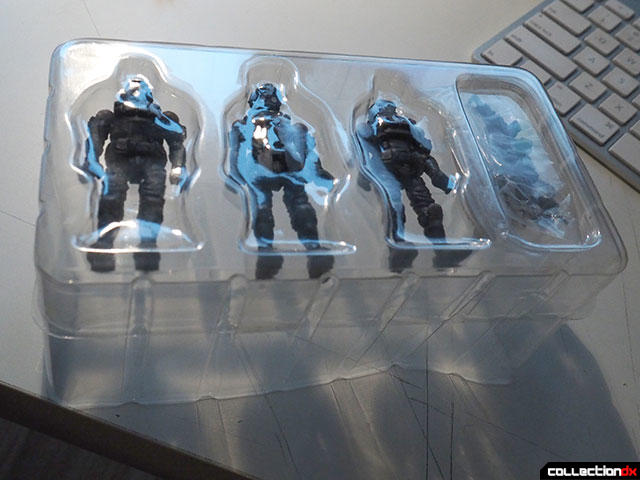 It's a very small box, as the contents are very small, they actually could have made it much smaller if were not for the very deep plastic tray. 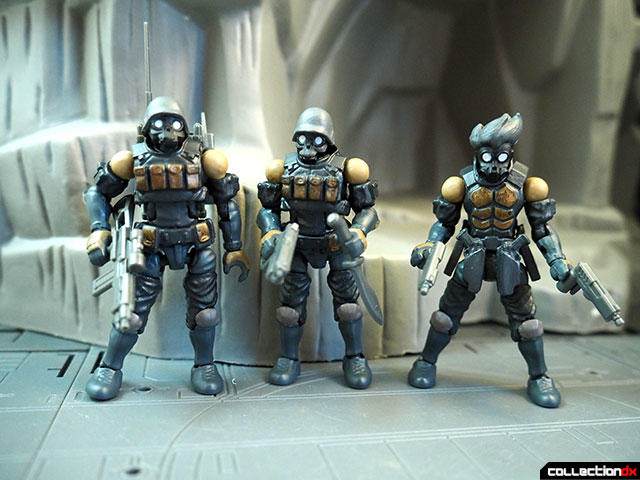 This is my first foray with the "Bucks Team", but I can tell that the team just looks cool. The lead figure with the hair is called "Jack" and the others are just listed as Bucks Team troopers. I have no idea who Jack is but I am going to make some assumptions based on appearances. 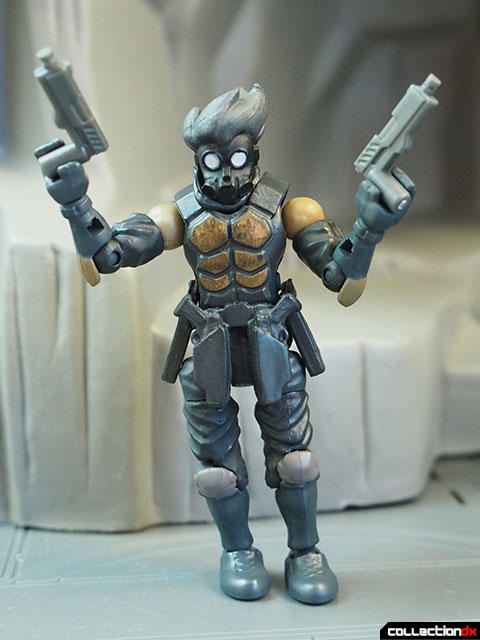 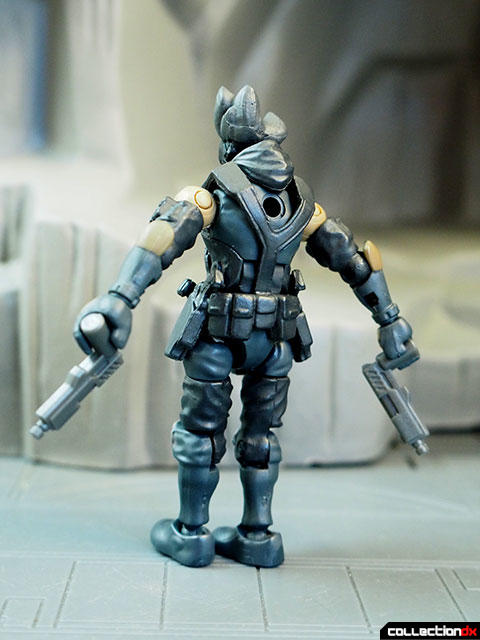 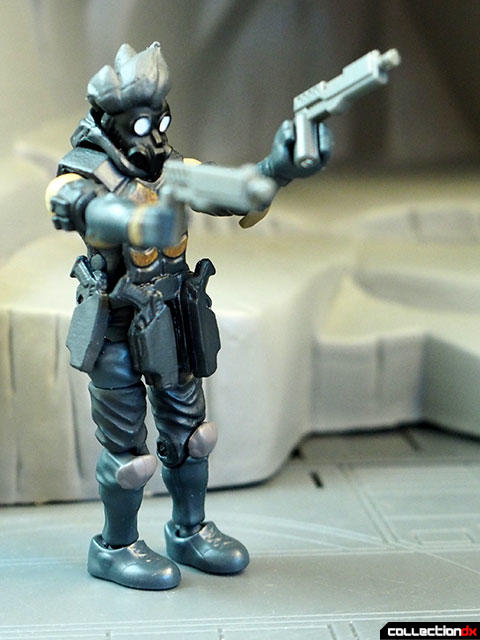 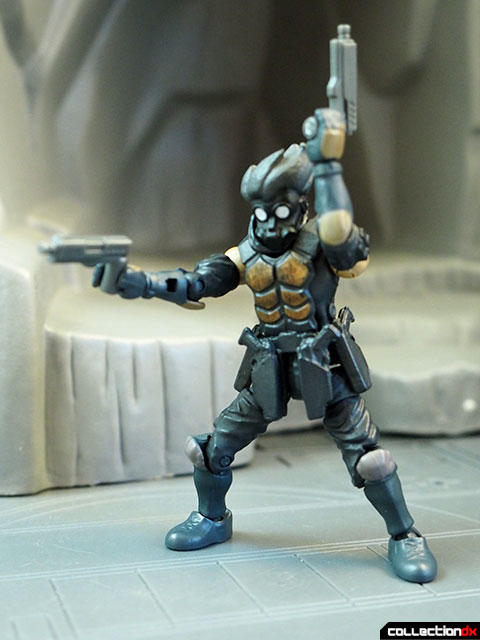 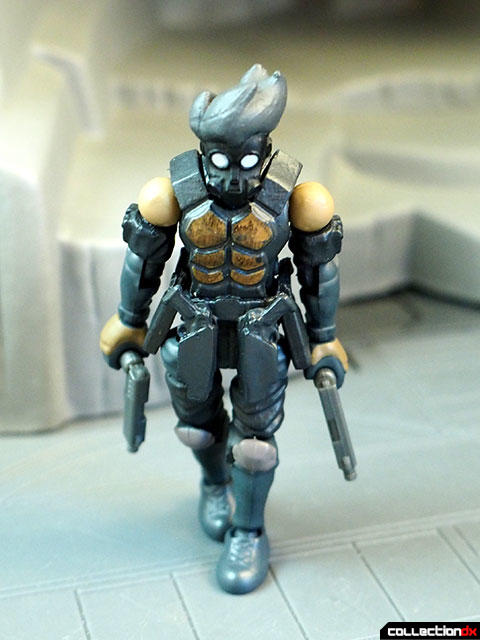 Jack is the cool dude who uses lots of hair product. He likes his hair to look like he's falling off a cliff, but in a cool, controlled way. Everyone in Agurts needs to wear a face mask due to pollution, but Jack has used so much hair product that it's now immune to pollution, and so he can just let it all out there.

Jack likes guns but does not believe in ammo clips, so Jack carries four extra handguns strapped around his waist. It just looks cooler to toss away a perfectly good gun when it's empty than to have to stop and reload. 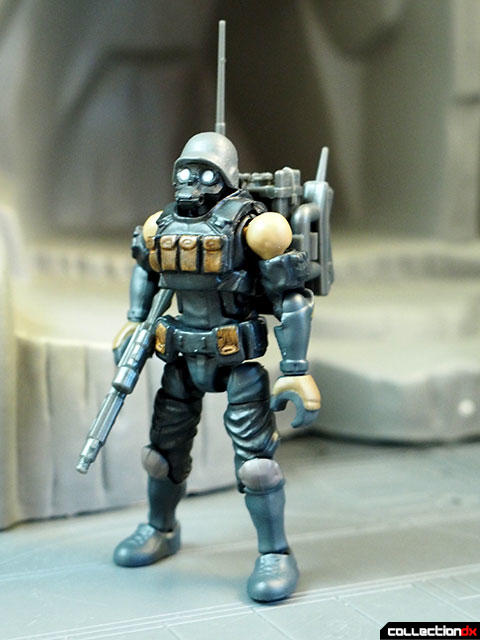 The other troopers have no names, but I'm going to call this one Steve. 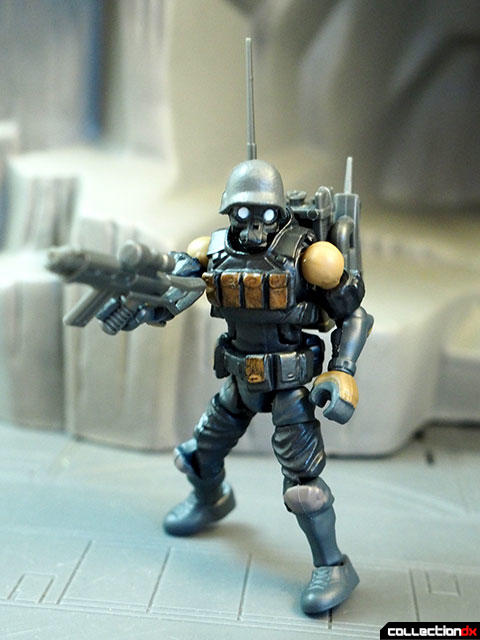 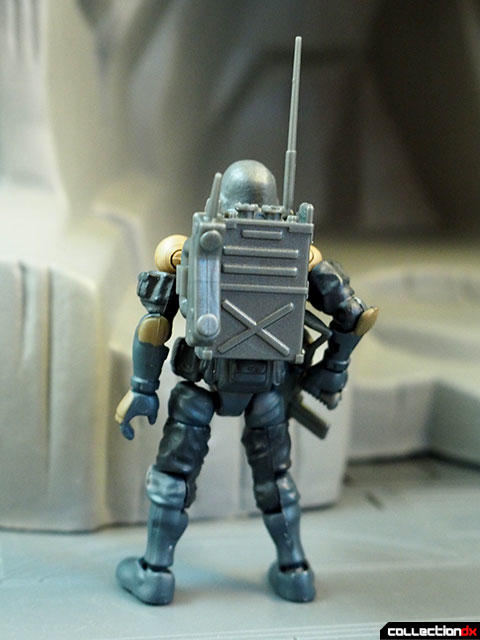 Steve pulled the short straw at the morning assignments and has to lug around the hilariously outdated communications module on his back. It even has a clip to attach an actual satellite phone to, just to mock him. 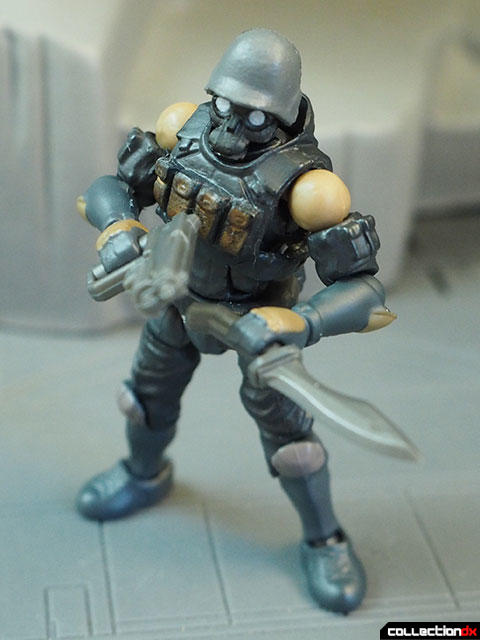 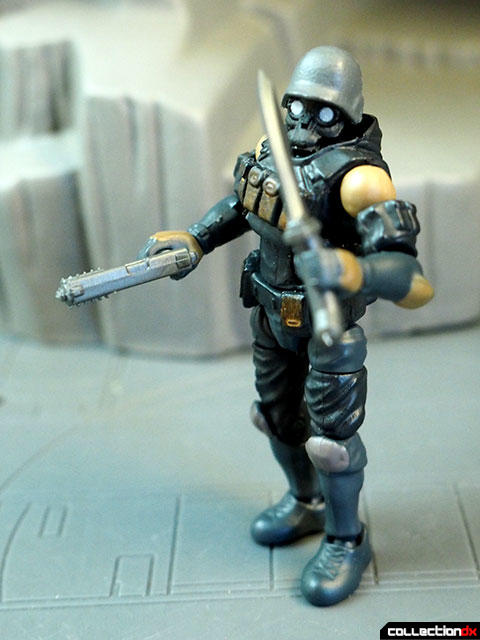 This last guy I'm going to call Gerald, but his friends call him "Stabby", because he just likes a-stabbin'. He's got a cool curved knife that I haven't seen in Acid Rain before, which he probably stole from the last guy who called him Gerald. 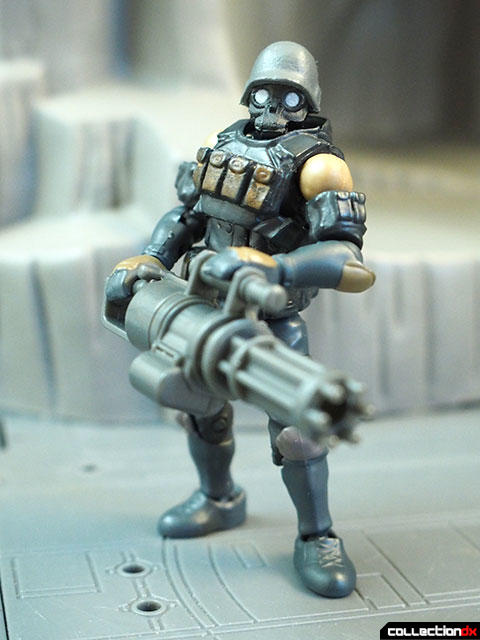 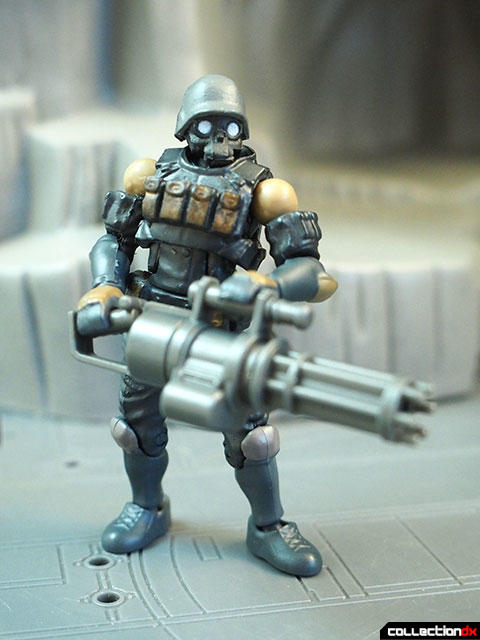 There are some other weapons included with the set, but my favorite is the Gatling gun. It's just a badass weapon despite how impractical it is. The gun barrel can actually rotate as well. 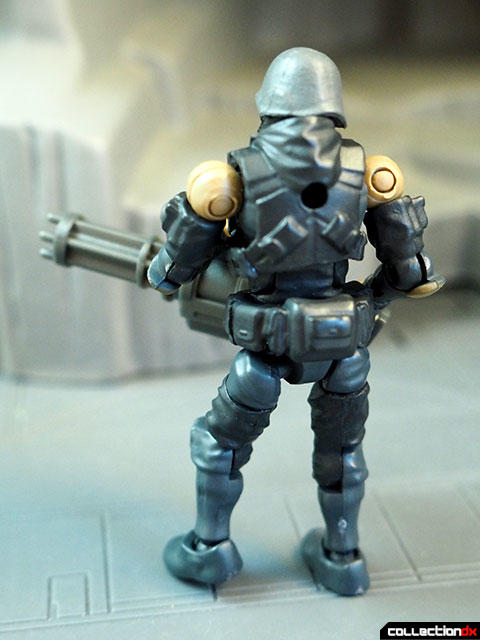 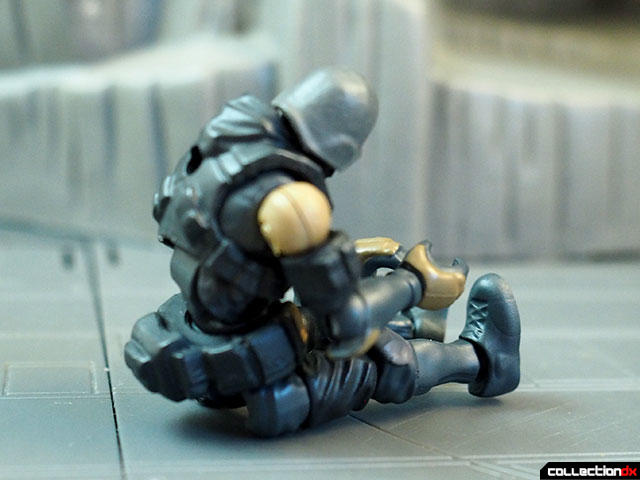 It was playing with this figure that showed me that these figures also have bendable chest joints! Most of these figures come with armor or vests that restrict chest movement, but these Bucks Team troopers have half-armor that allows for the chest joint to actually work! 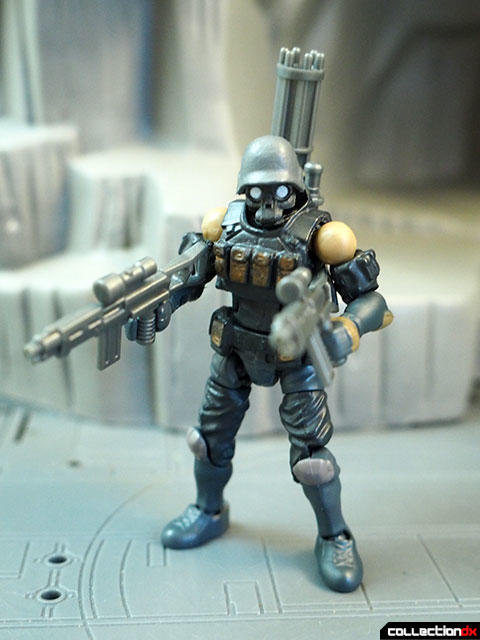 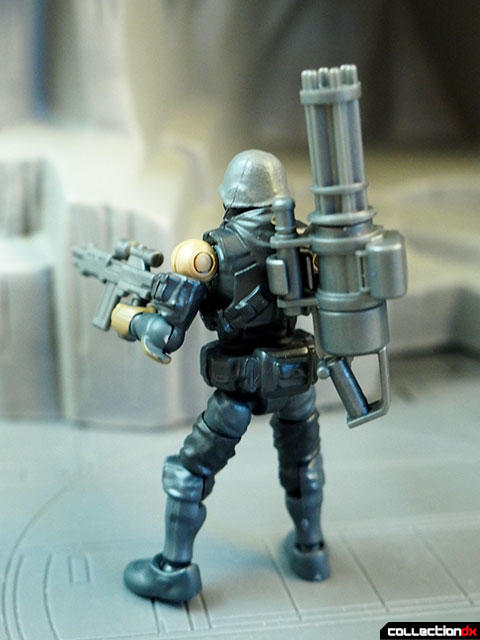 If you take one of the weapon clips from the Chapel Set, you can make it so the Bucks Team trooper (or any figure) can attach the Gatling Gun to the figure's back.

This set is fun, and it's interesting to see other factions of the Agurts military, but these feel like bad guys to me, and until I get some actual bad guys, that's the role they will play in my Acid Rain world.

These samples were provided by B2FIVE, and the Bucks Team is available on their website for about $30 USD.