"Breakaway is really fast and likes to bomb things."

I have a thing for robots that turn into jets. Breakaway is my recent cheap fix. 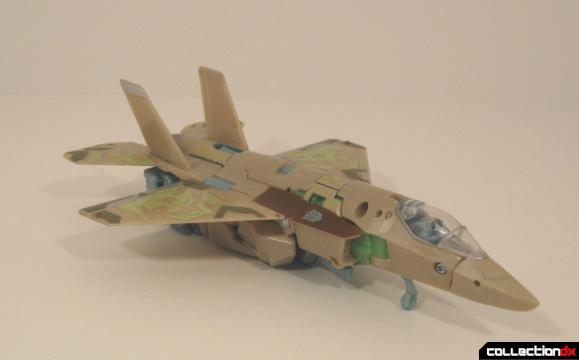 In jet mode Breakaway is a reasonable facsimile of an F-35 Lighting II. He is cast primarily in shiny tannish-brown plastic with his details provided by paint applications. One notable feature of this mode is that his head is visible inside the cockpit. 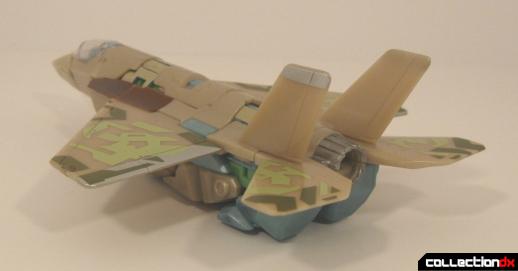 From the rear, Breakaway looks reasonably compact and complete for an tweleve dollar toy. He is light years ahead of the jets from the previous movie line.

In profile we can see how all his parts fit together quite nicely. Breakaway has one retractable main gear and two wheels on his underbelly which all him to roll about while making plastic rumbling noises. 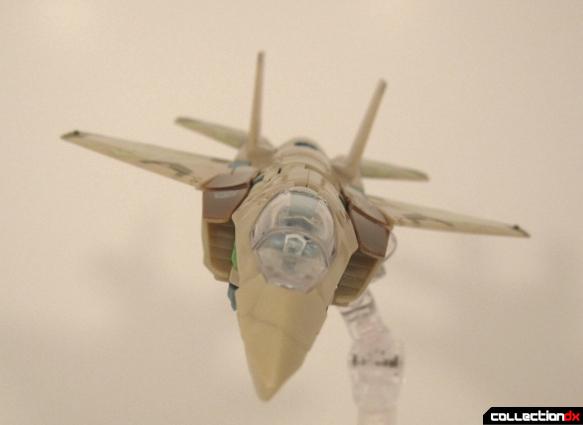 Breakaway even looks good "in flight." 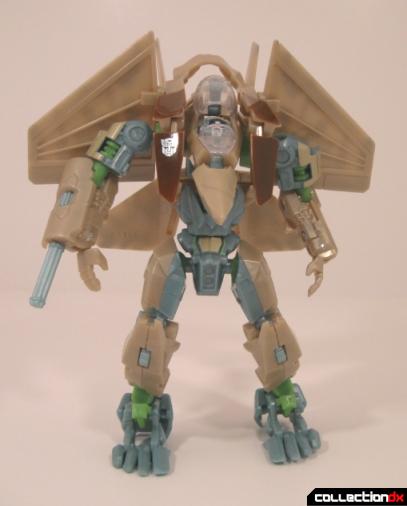 Transformation to robot mode is easy and intuitive. It feels a lot like Energon Starscream or Generation 2 Smokescreen and I like that. In robot mode Breakaway combines that classic Aerialbot look with a "frog man" motif as evident by his large feet and hunched appearance. 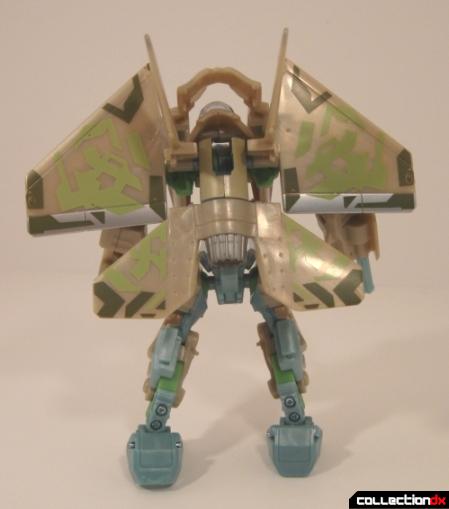 From the rear we can clearly see the "tribal tattoos" that dominate his wings and tailfins. I would have much preferred some old Aerialbot style stripes to these weird green markings. 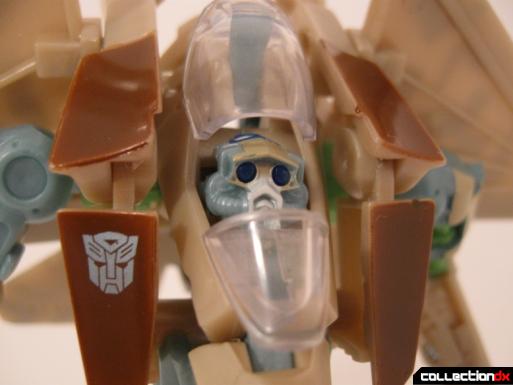 Up close we can see Breakaway best feature: his adorable face. A combination of a Zaku-esque breathing mask and two large blue eyes make this badass robot look like a helpless little puppy. Won't you give him a hug? 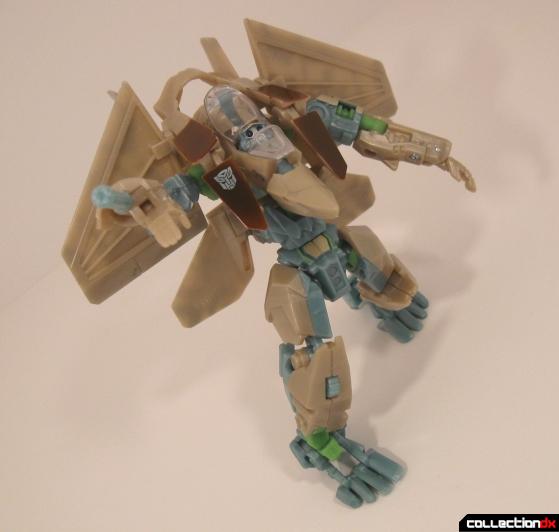 Breakaway's articulation is pretty standard. He does have a waist joint but in order to use it you must forgo locking his tail section into his back. His one "Mech Alive" feature is a dial on his right arm that spins the Gatling gun. The gun is really tight whereas ideally it should just spin freely with a flick of the dial. 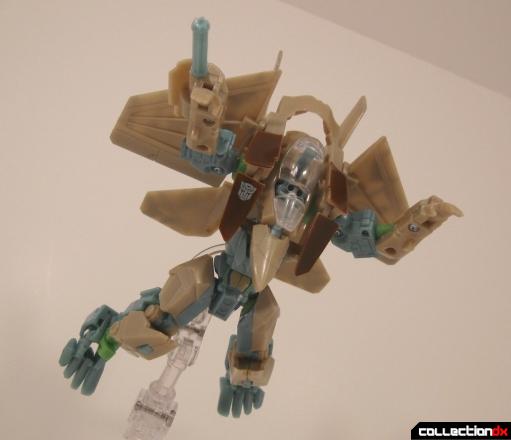 In the end I found Breakaway to be a refreshingly simple figure. The combination of a great jet mode, intuitive transformation, and charming looks makes me think Breakaway will be a sleeper hit for the new Transformers Revenge of the Fallen movie line.

Hem, great both in robot and plane mode... wow, I think I'm going to get this guy... thanks for the review.

Oh it's a F35, the plane that Bruce Willis Brought down...

Hell, I'll admit it, that's why I bought Breakaway. Those eyes kept haunting me. (Plus, TRU had a sale on ROTF deluxes.)

Make sure to get the ROTF Voyager class Starscream. It's easily one of the craziest awesome transformations I've seen in quite some time.

No Monkey Jet for me.

Love this little guy.. "he's so cute" as my girlfriend put it.. to which my response was "Transformers are not cute!, They're ruggedly handsome... wait no. thats Hugh Jackman, damn it, OK he is cute"

Excellent review, Andrew, and that does seem like a pretty neat toy, especially for the price. I don't mind the feet (or really, it's the toes that are the problem, imo) so much, but I would prefer the head weren't buried, as you say. Maybe it's more visible in person, but it seems too hard to see in the pics/video.

Some people had pointed out that his head is mounted on a balljoint and can actually extend out if you scrape some plastic out of the body. It looks like it was originally meant to swing out a bit.

Hmm...not a bad F-35 toy at all! I'd probably get this if there were a repaint in "normal" joint-strike fighter colors...and a more interesting head (sorry, this one doesn't do it for me). Still, not a bad toy at all!

also if you want more head articulation its quite easy to do. just take apart the torso and movie the head (thats on a ball joint) and screw the toy back together. I posted a detailed walk thought on tfw2005

Some info : the lime green/olive green camouflage pattern on his wings is, I think, some sort of digital camo pattern...like MARPAT, on real life military gear. Doesn't really make sense to put it on a jetfighter...but ok...

His colours remind me a lot of the VF1D & the VF1 cannon fodder from Macross. Kinda retro in a slightly tacky way.

Anway, I modified his wings to resemble the F35 jet, he's supposed to represent, a bit more.

Q: Would this Breakaway lie to 'us' because his head is so cute to buy?

That's a neat little toy. Wish they had this kind of thing when I was growing up. I may buy it for my nephew and at least I'll get to play with it. online casino