At this point we don't need to introduce Boss Borot, do we? Goofy sideckick robot of the original Mazinger Z? If you don't know, shame on you.

So this iteration of Boss Borot is brought to you by Evolution Toy, purveyors of fine magnemo toys. As a rule, they take what would normal solid robot designs and turn them into shaky messes. I'd like to tell you this is different, but it's not. At least it's kind of goofy. 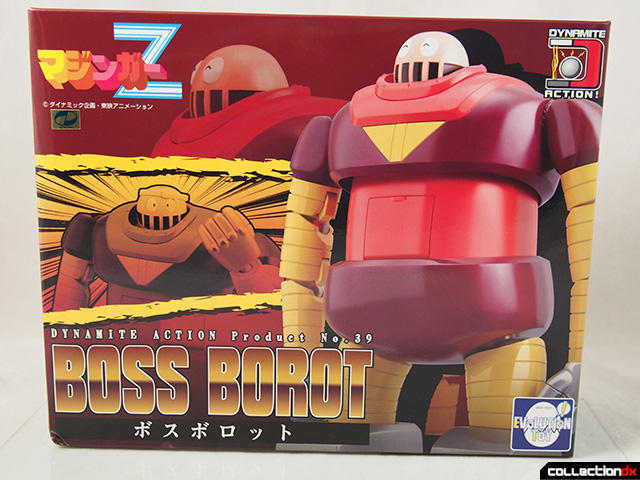 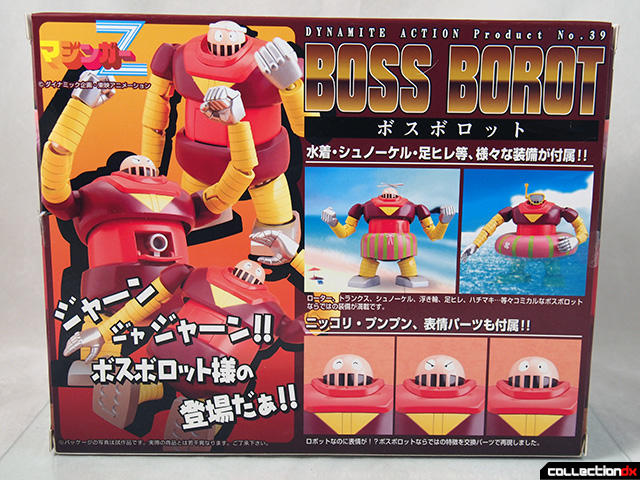 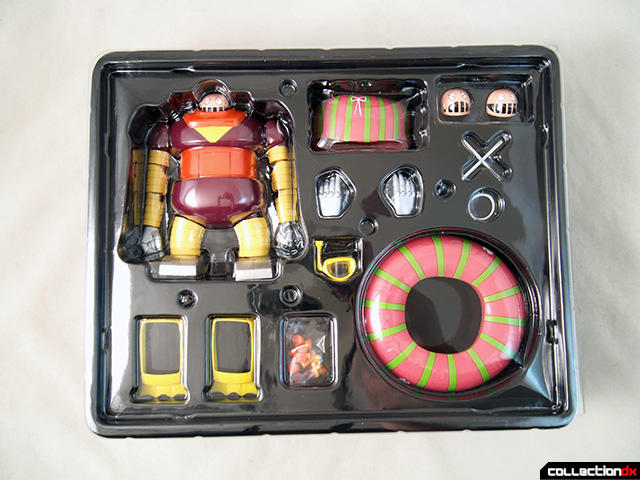 The selling point of this set is the accessories, but first lets get into the core toy itself. 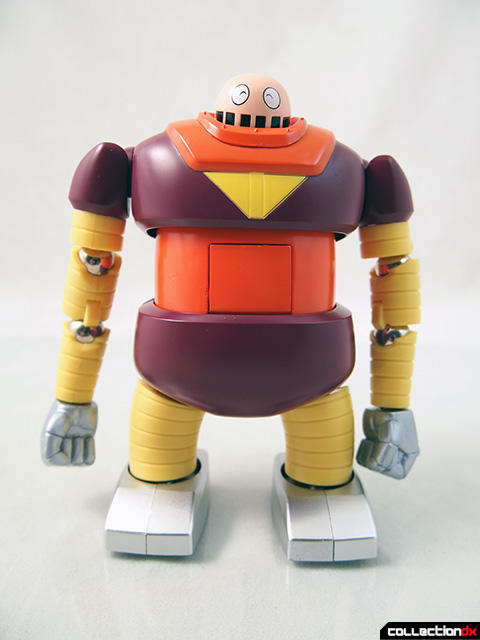 Boss is about 6 inches tall, and is made of plastic with metal balls and magnets connecting all the joints. The toy is lightweight and jiggly. 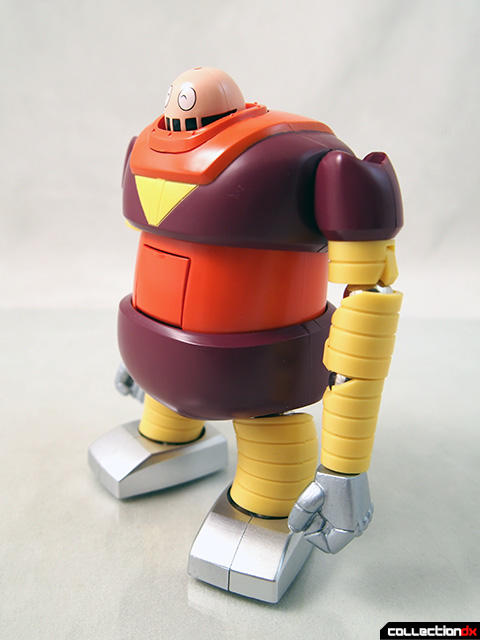 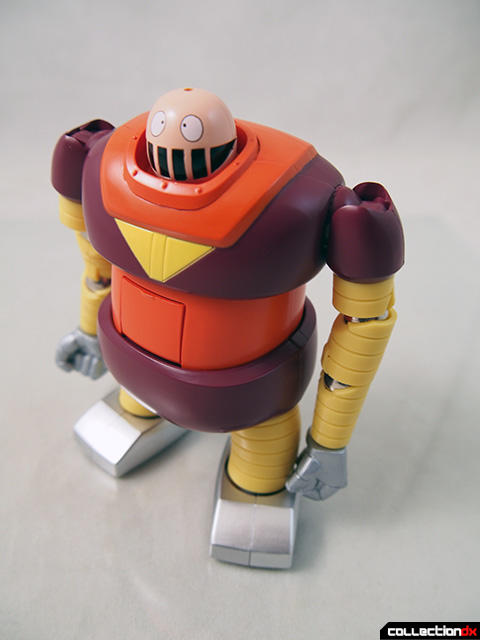 The back has a bunch of holes but Evolution included little plugs to fit in. 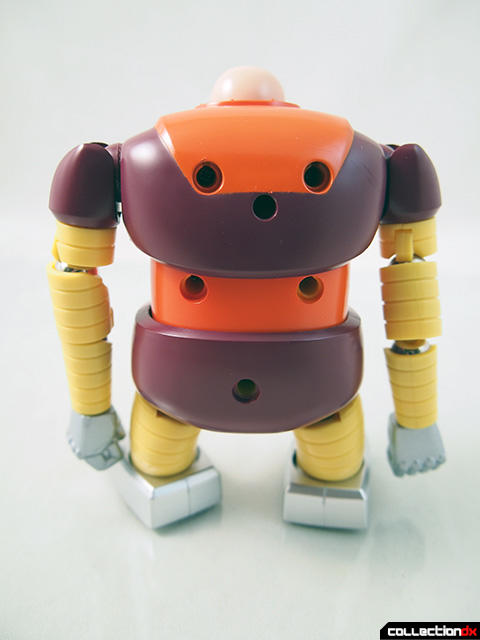 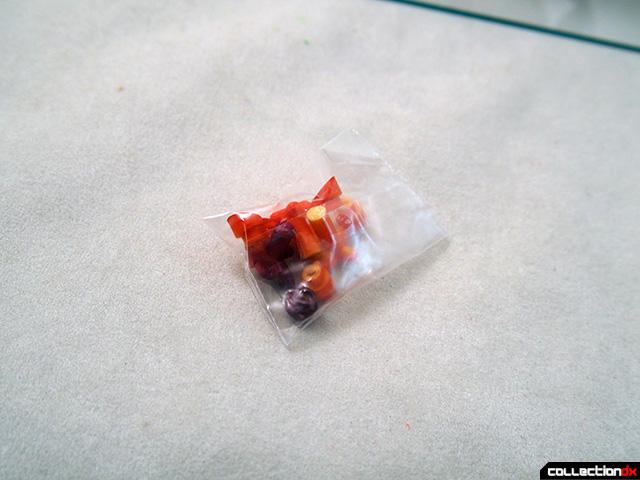 One of the big challenges of making a Boss Borot toy is how to handle the arms. In the cartoon they are just flexible tubes with no distinct joints. Bandai tried a multi-segmented approach with their Soul of Chogokin release, and this one attempts to use their magnemo joint system. Why nobody can come up with a bendy arm system for this that looks like the anime is beyond me. 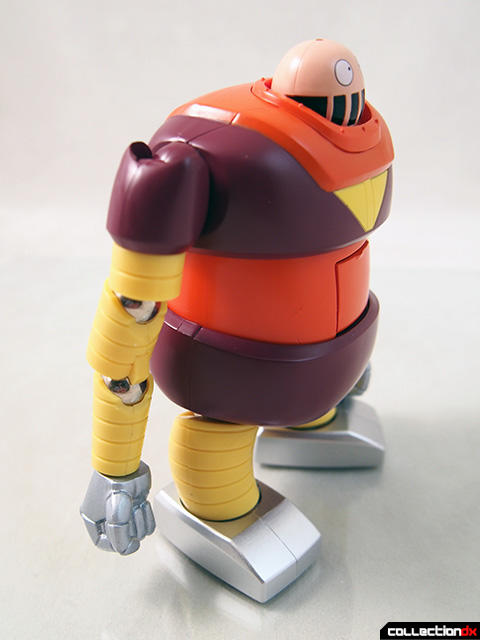 The arm connects to the body at the detented shoulder joint, which also has a hinge, and a rotating bicep. This ends on a metal ball with a joint, and then the next piece ends with the same, then finally, the forearm. None of these likes to stay in any one pose, and they move constantly. They are barely strong enough to hold more dynamic poses. I really don't like them at all. 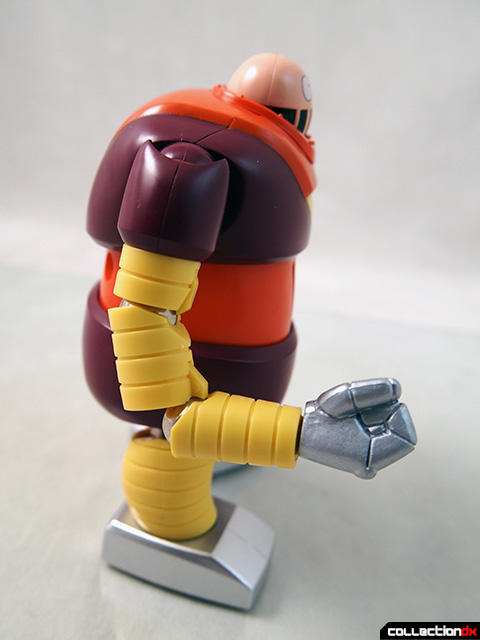 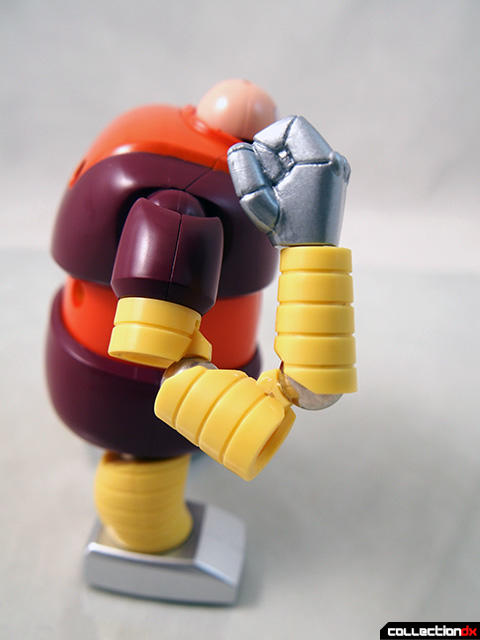 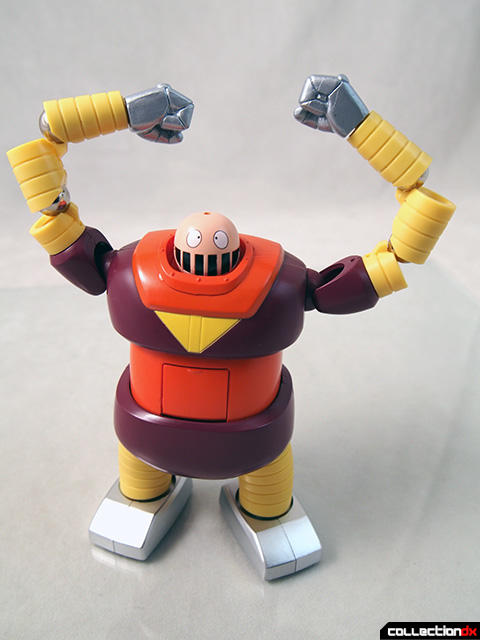 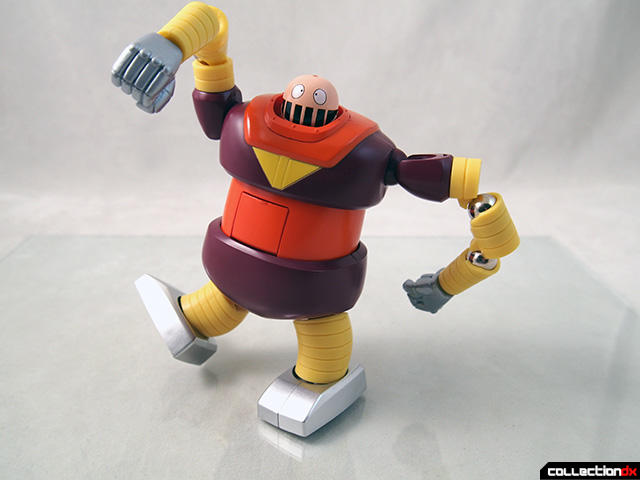 The silver fists can be swapped out for open hands. 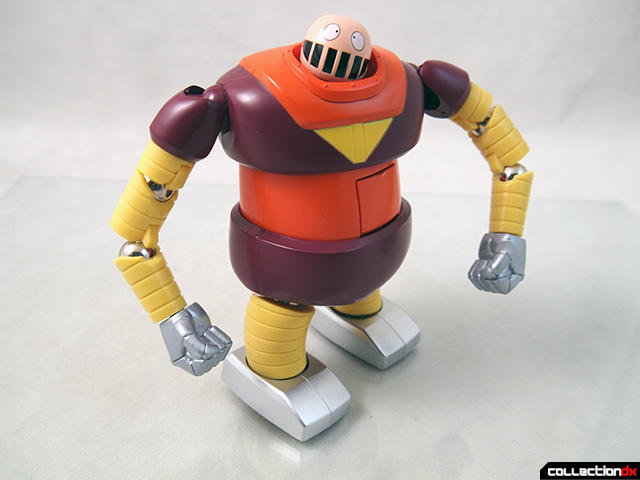 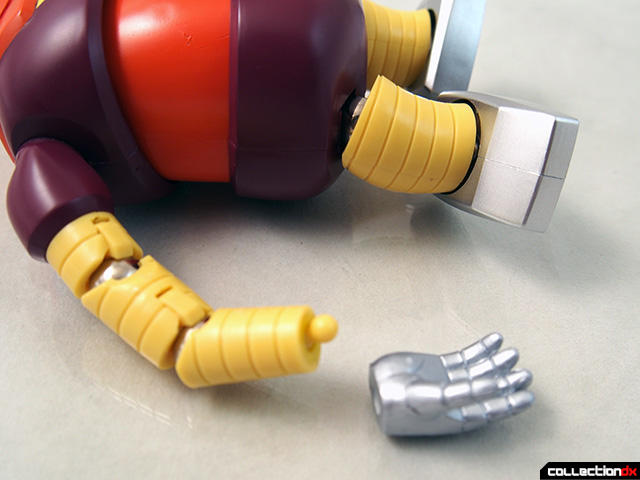 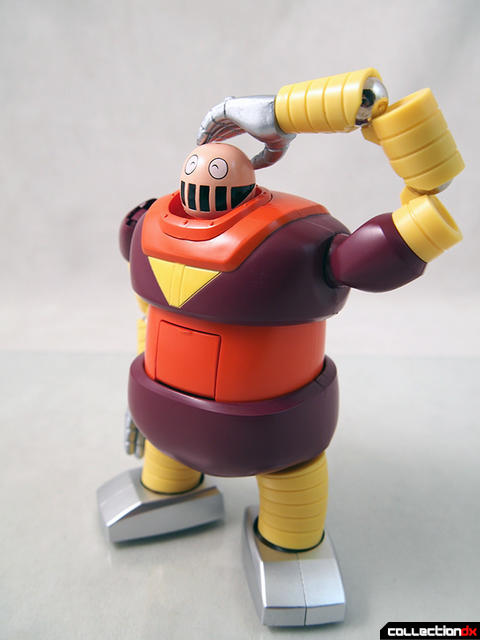 There's a small door in the stomach that opens to reveal a cannon. 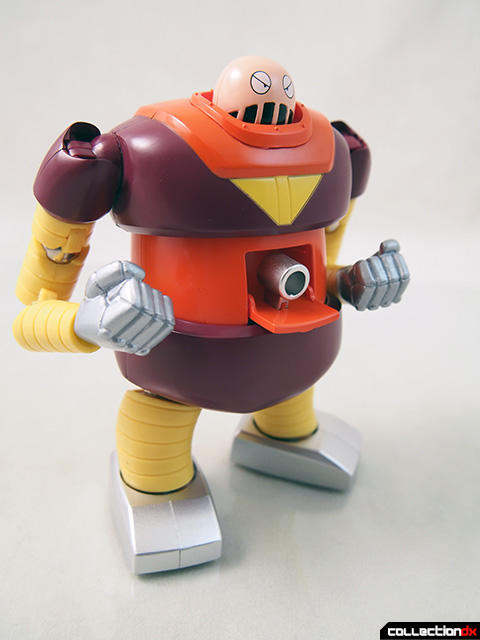 There's a lot of parts for the core body. You can see the break down here. 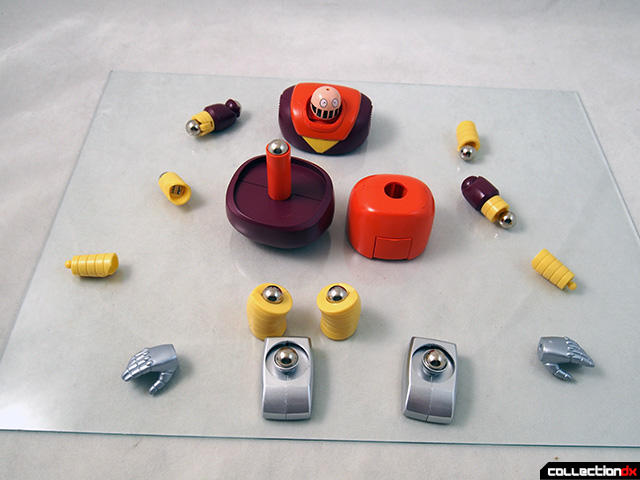 The main draw for me is the inclusion of the beach parts. These parts equip Boss for a day out at the beach!

The feet have flippers that fit tightly over. 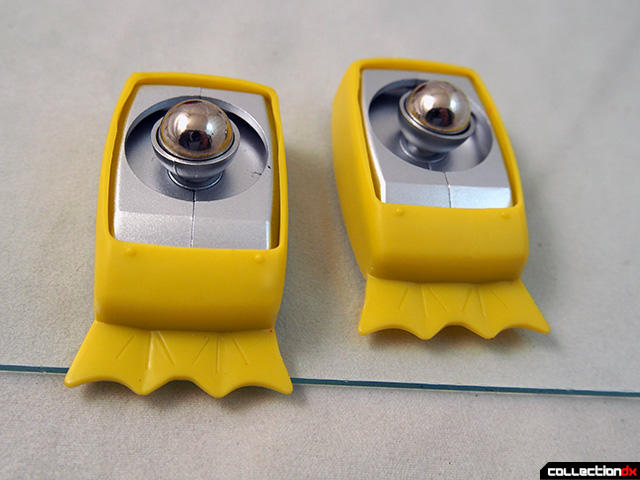 Now's a good time to showcase the rubber pads on the bottom of the feet. 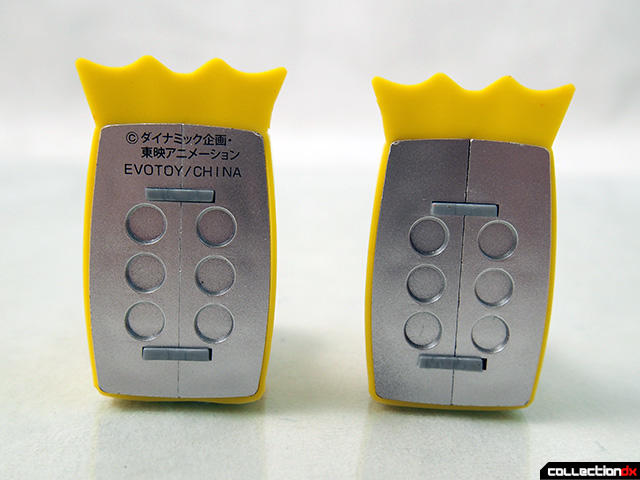 The beach gear comes with a few options and can be configured in various ways. Here you see the head propellor has been added, along with swim trunks and flippers. 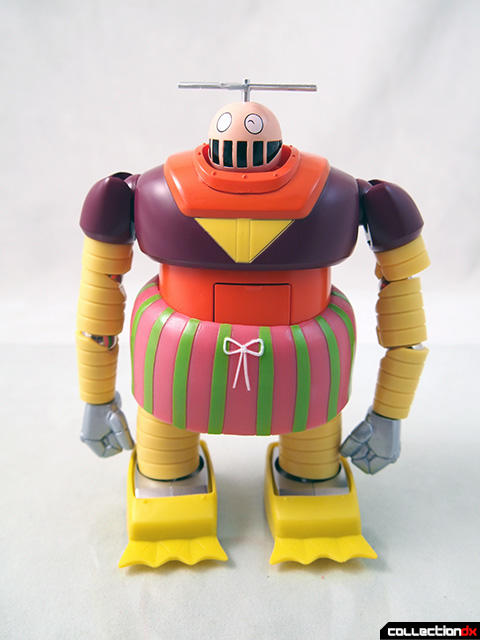 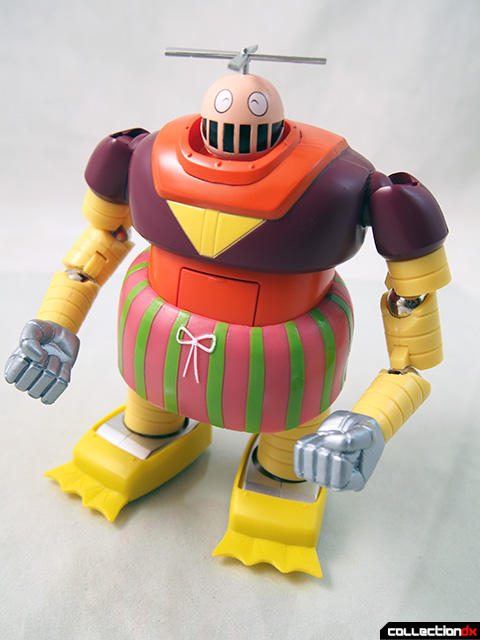 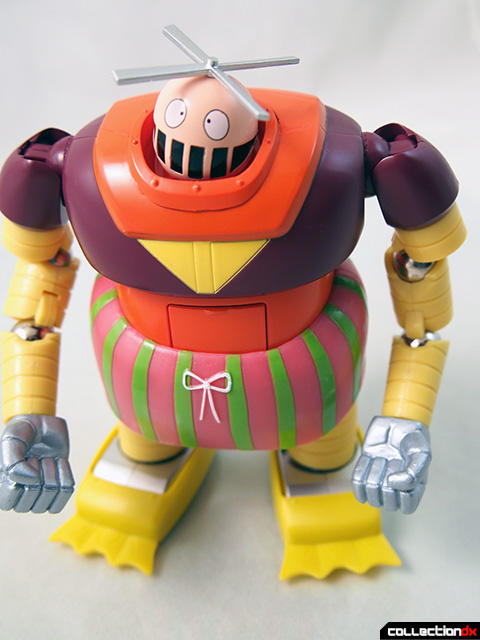 You need to separate the body to slide over the trunks. Also, there are pull out joints that enable a greater range of motion in the legs. 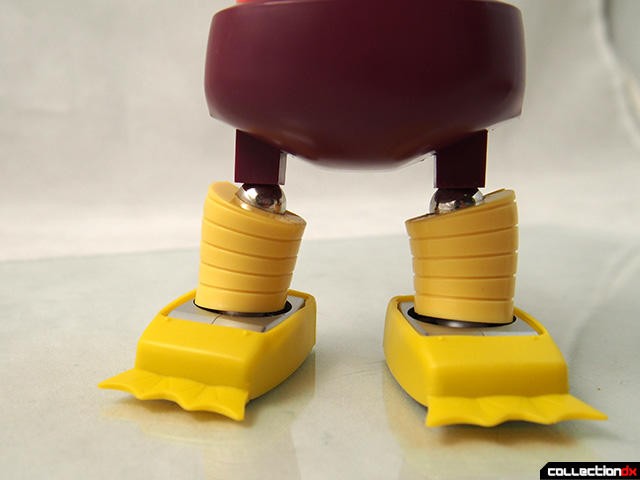 Also included is a set of "inflated" trunks that attach in the same fashion. Boss is shown here with those and the scuba mask. 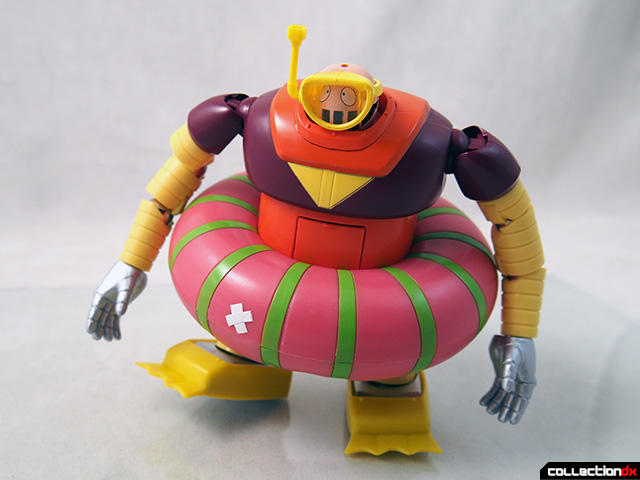 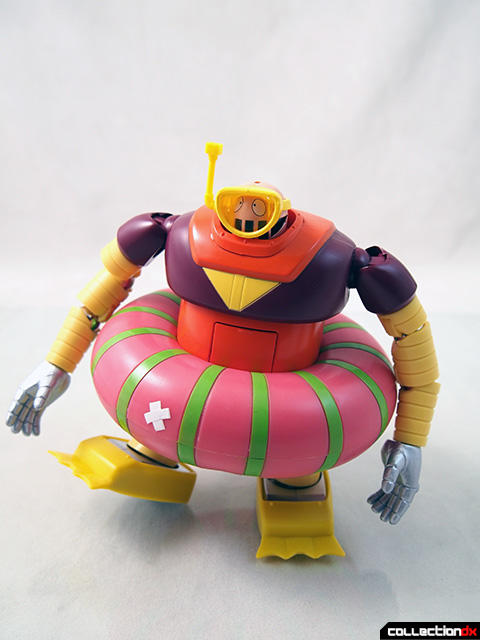 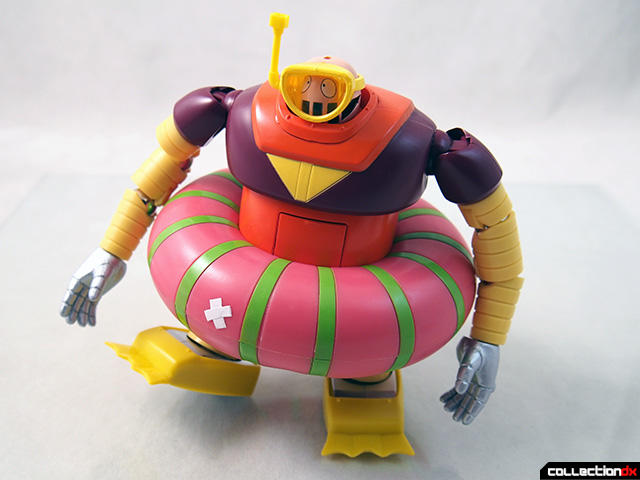 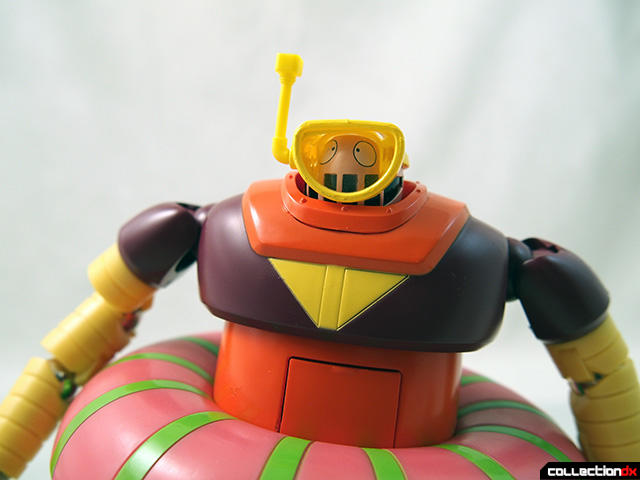 Finally, a white headband is included, but it barely fits around the head. 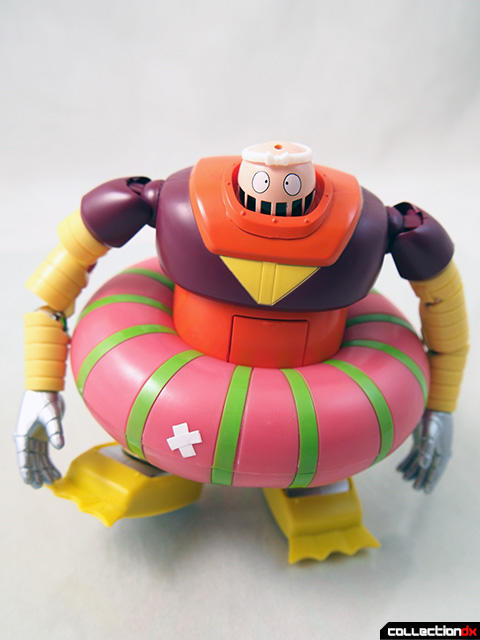 You may have noticed a few different heads for Boss. Three heads are included and they attach via magnet. Be careful with them, as the magnet is attached to a peg with weak glue. Mine fell apart, then the peg fell out. 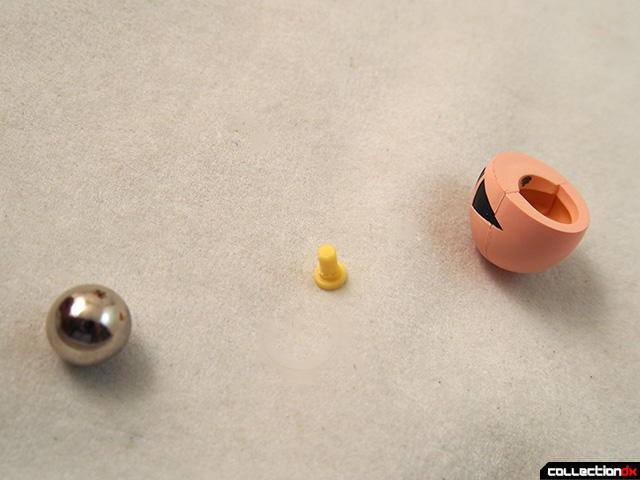 The only way to get the peg back in is to separate the head, and you can't do that without breaking a glue seal. So if you are keeping count, it's the third Evolution toy in a row with QC issues. At this price point, it's just not worth it. Unless they get their shit together i'm done with Evolution toy.

I always want to like Evolution Toy but.... it never works out that way. Plus I just got GX-10 in my crazy SOC back collecting and it just made me so happy,..... collection dx is still the place to get a real review. Nice job.

Yeah the difference between GX-10 and an ET is astounding. GX-10 is so solid you could anchor a boat to it. The limbs move like butter and more or less work, even if not perfect visually.

Really pretty looking over priced mess is pretty much the rule of thumb with ET. I wish another quality producer would hire ET sculptor and put some real engineering behind him. As it is ET has long been on my list of " only by if discounted below $50". And after my last one even that is questionable. It's heartbreaking. Their sculpts are gorgeous. They do the obscure stuff no one else will. By why oh why do they stick with the cheesy magnetic balls? They can't have many adult collectors lining up to pay $200/per for that?

Boss Borot looks like he suffers from the same issues as the Samurai Pizza Cats Robot. Big empty plastic boxes balanced on wobbly magnets with all the weight on the top. A pretty looking hot mess.

Evolution Toy is an unfortunate situation. If only you got the good, mind you good, CMS construction. Last thing I bought was Gordam. Beautiful design and the finish looks pretty sharp. It's overly light and the magnet system is lack luster. It's a total what might have been situation which is truly sad cause they focus on these charming old designs that no one else touches and you get something rare, pretty but badly executed. It's almost worse than not getting it at all. Their Diapolon is supposed to be their next gen release right? High hopes? I have them.

Diapolon and the modernized Tetsujin 28 are their new updated "Gokin" offerings, if they ever become anything more than trade show demo test shots. Diapolon looks to still use ET's Magnetic joints at least in some places. Which is worrying. No way those would support the amount of metal they first proposed for the thing. That may be why they pulled the initial pre-orders and re-solicited it with some different specs. The "DX" Tetsujin 28 looks interesting, but I'm still in a wait and see mode.

Of the ET's that I have, I have 2 that are reasonably decent. Babel II Posiedon and Braigar (and by "reasonably decent" I mostly mean they look pretty on the shelf, don't tend to fall over or shed parts and can be somewhat posed if you are patient) and 3 that are just plain awful! The Samurai Pizza Cats Nyangoking, Laserion and Albegas. They fall under the category of "Not worth the time wrestling with to even display. Just put it back in the box"

I did notice the magnets on Diapolon, sadly. If Tetsujin 28 is great that would be nice. I so miss CMs Corp....