Sixbuilder is a Japanese exclusive Micromaster combiner who was later repainted into Devastator and released over here in the states. This review doesn't really cover the actual Sixbuilder per-se, but a different version of him as the title of the review will tell you. 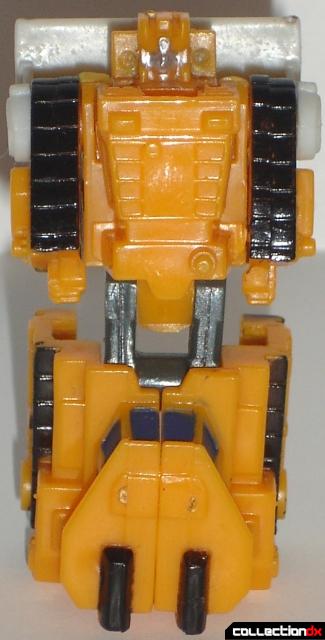 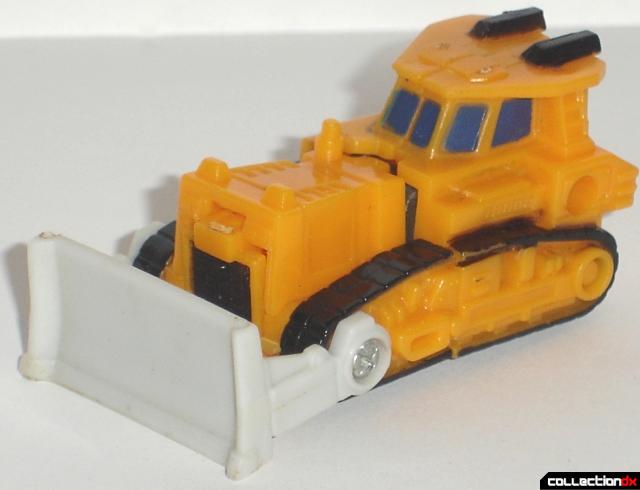 Starting off with the leader Crush-Bull who transforms into a bulldozer. He has 3 points of articulations. 4 if you count the had bobbing up and down, but that's due to his transformation. You would never think that he would become the back part of Sixbuilder. Then again, Scrapper was the leader of the Constructicons and became the right leg but still, but at least he was still visible from the front! 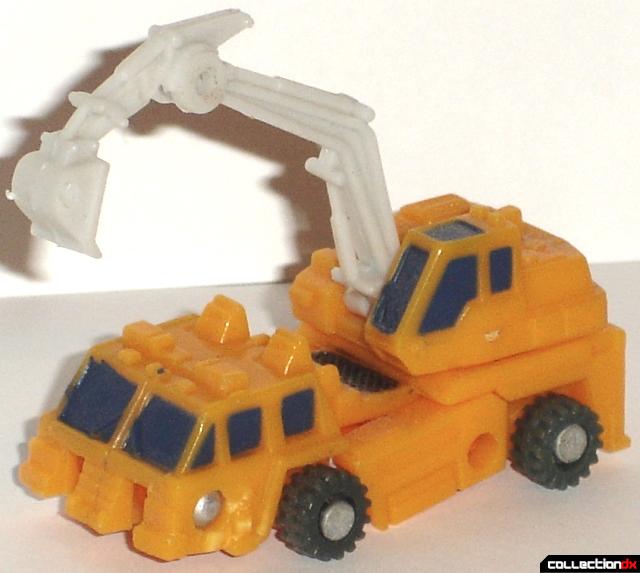 Digger, the excavator can become either the right or left arm of Sixbuilder. In robot mode he has 3 points of articulation. In excavator mode, his digger arm has 3 points of articulation. Surprisingly, all of his wheels can move. Seems like he and Iron Lift are retools of each other. Going from what I've seen, in the Transformers universe excavators normally have treads and cranes have wheels, but it's nice to see a little variation every now and then. 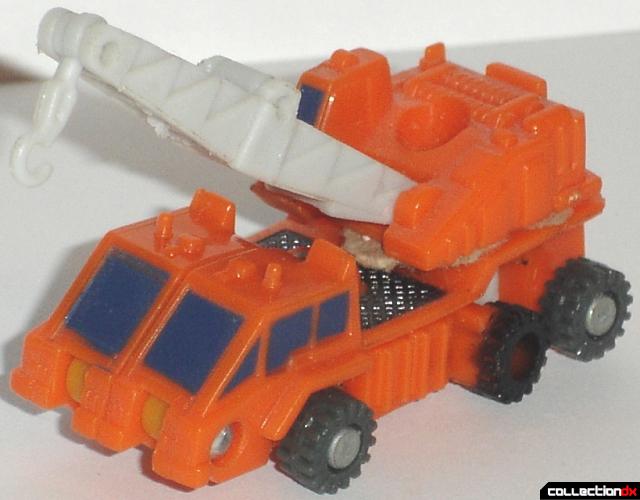 Iron Lift the crane is basically the same as his buddy Digger. Both can become either arm for Sixbuilder and they have the same articulation. Iron Lift's hook has three points of articulation. Only 4 out of his six wheels can move which is still pretty good. 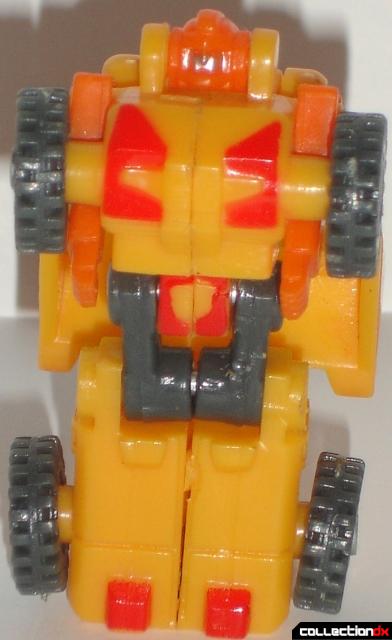 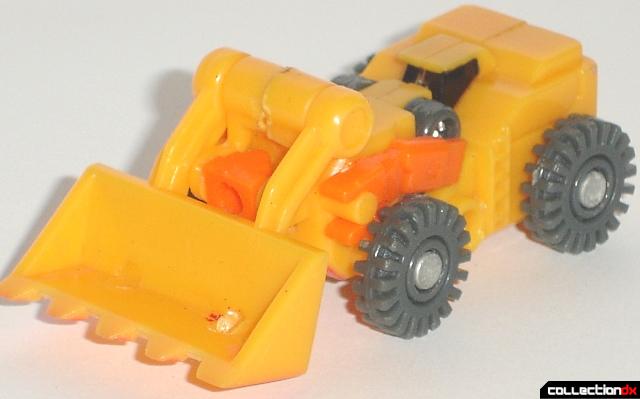 Gran Arm the front-end loader has five points of articulation. Even though both hip and knee joints move, his legs can't be separated so he can only sit straight down or stand straight up. The two large tires over his arms hinder his arm articulation unless you swing them over. Even though Gran Arm forms the central chest piece of Sixbuilder, he's not the leader. 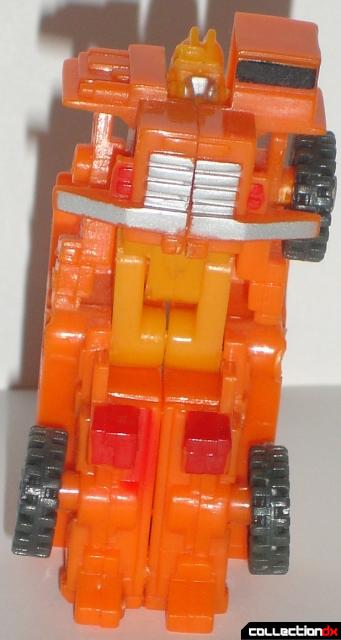 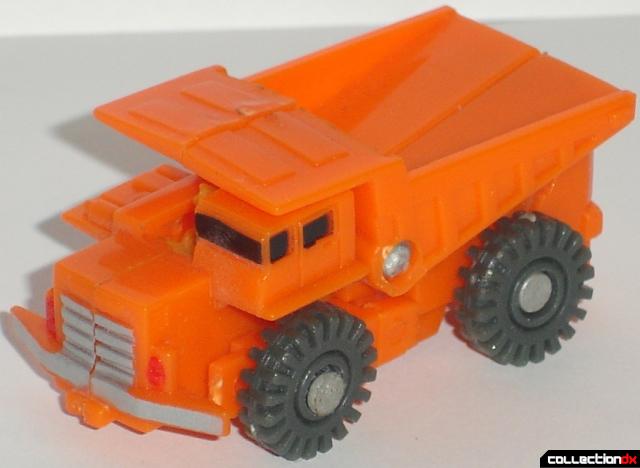 Treader the dump truck can form either leg of Sixbuilder. He has 5 points of articulation, but like Gran Arm his legs can't separate. I like how his head design looks like a hard hat. Very appropriate for the construction theme of the group. 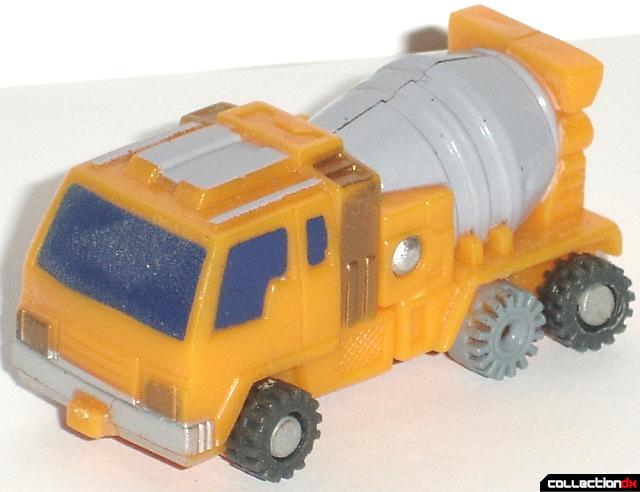 Mixing can form either leg of Sixbuilder, has the same amount of articulation as Treader, and also has that "leg" issue. (If I had a dollar for every first generation transformer that had "brick leg syndrome...") The giant hole above his head reminds me of Mixmaster's missile launchers. Maybe this could act as some kind of destructive energon cannon. 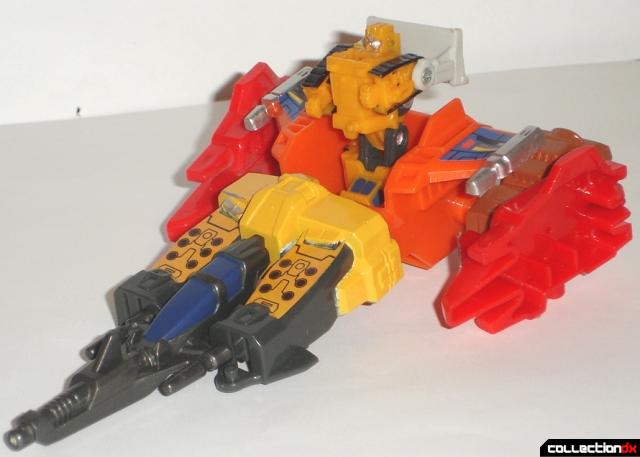 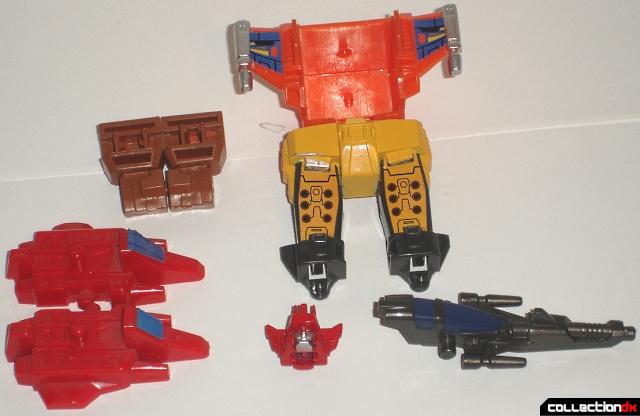 As with all Micromaster combiners, the top and bottom halves of the torso were originally supposed to separate, but here they don't. Not an issue because all of his "kibble" can be put together into a jet. No more worrying about missing or loose pieces. This may come as a surprise to you all, but the yellow "trunk" section is made out of metal. Yes, REAL metal which is something that's usually non-existent on bootlegs. The thighs however, are made of plastic even though they and the trunk are all one solid piece. I have no idea how to explain that one at all....

Again, keeping up with the "construction" theme, you'll notice that these guys are color coded. Mainly orange and yellow with little bits of black, dark grey, dark blue, white, red, and silver peeking back at you. 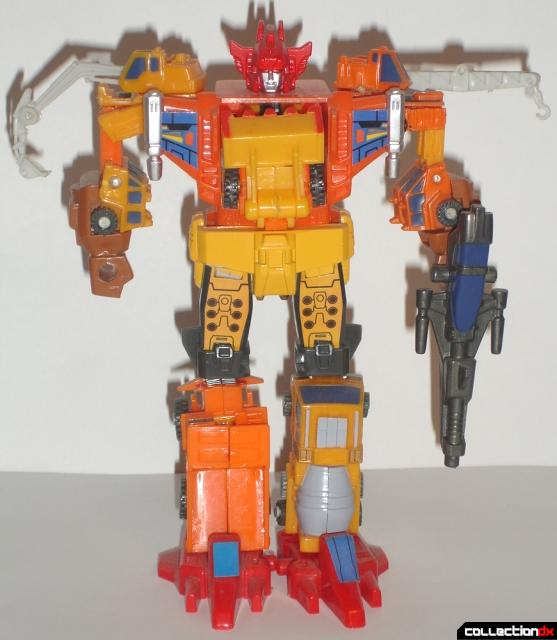 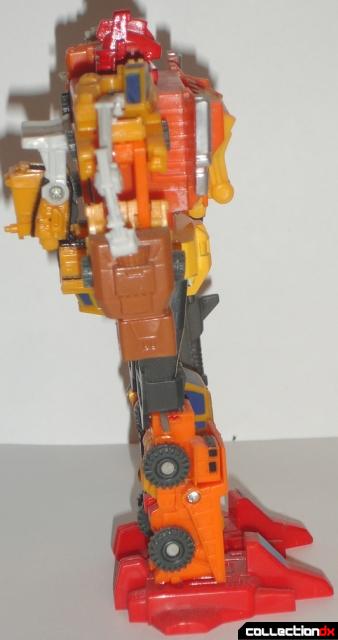 In robot mode, Sixbuilder is really neat and clean looking (as far as construction robots go). Here we have blue decals on the feet and chest plate that doesn't detract from the look at all. I think they do a good job at breaking up the loud colors. I'll bet you'll also notice the addition of light brown, which are the color of his fists. The way they're shaped reminds me of rugged working gloves. 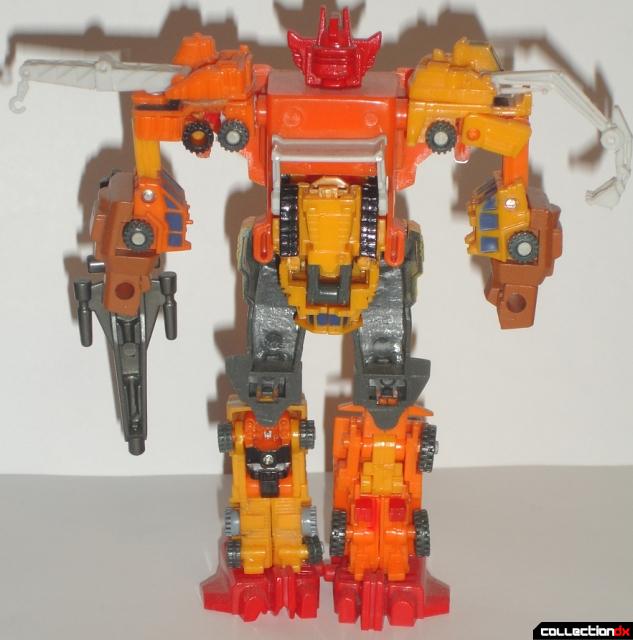 To be honest, he actually doesn't look bad from the rear. I just figured this out recently, but if you rotate his head around, adjust Crush-Bull, and swapped his arms and foot plates, you could give him an alternate robot mode.

In my collection, I have good bootlegs, somewhat decent bootlegs, and bad bootlegs (and when I say bad I mean TERRIBLE. Take a look at my Bootleg Superion review). Sixbuilder is one of the good ones (At least the sample I have is good). He's sturdy, nothing has broken off yet besides one of Treader's front wheels (it was like that before I opened him up), no loose joints, he contains METAL, he has all of his original parts, and absolutely nothing has been simplified (glares over at my bootleg Land Cross). If you collect bootlegs, try your best to get the version I have and be very careful because some of the bootlegs I've seen in recent years have been simplified all the way back to the stone age like the bootleg Landcross. If you're not into bootlegs and have the extra time & money, either track down the original or one of the repaints. Not sure how much the Devastator repaint is going for these days. If I'm not mistaken, I believe that's the most recent version of the mold.