Sun Warriors Uranus 5 Changes (who has an extremely unfortunate name) is one of three (known) releases in the Sun Warriors line (the other two being Sun Warriors Mercury 8 Changes and Sun Warriors Jupiter 3 Changes). Mercury is a straight redeco of Scorponok, and Jupiter is a retooled version of Red Geist from Brave Fighter of Legend Da Garn. What makes Uranus unique is that he has been extremely retooled from the toy that he was based on: Fortress Maximus. Uranus is about 7.25 inches tall, while Fortress Maximus is almost two feet tall, making Uranus one of the most severe cases of downsizing in all of Transformers knockoff history. This toy was also sold as Transforming 5 in 1 Uranus, and I am not sure which version I have because I do not have the packaging (I just like the Sun Warriors name better). From what I could find on the Internet, the 5 changes of the toy seem to refer to intermediate steps in the transformation, but there are other ways to get 5 changes, such as the 2 modes of the head and the three modes of the body. 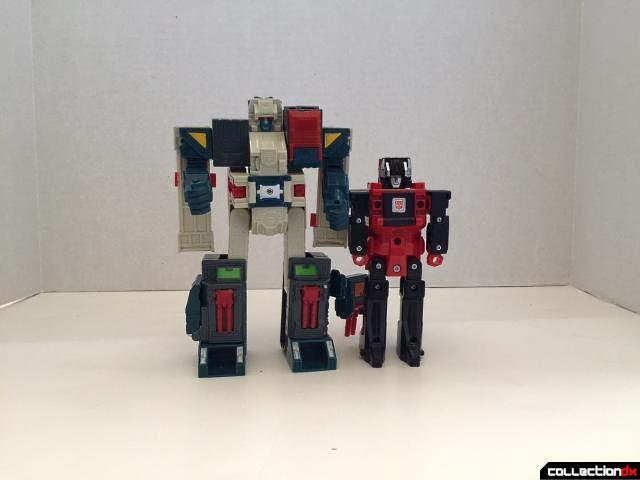 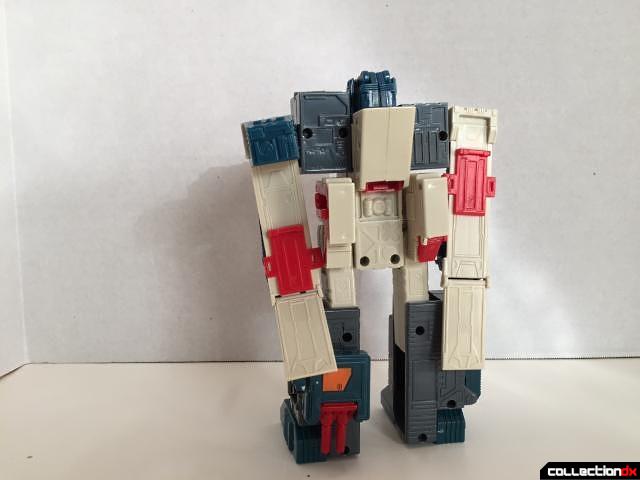 In robot mode, Uranus is about an inch taller than the large Headmaster from any of the “Maximus” toys (I used Brave from Brave Maximus). The colors are not the same as the original Fortress Maximus. The opaque red windows are supposed to be clear green, the face is supposed to be light gray instead of blue, all of the white parts and some of the light gray parts are now beige, and the blue is somewhat off. The only color that looks similar is the dark gray. 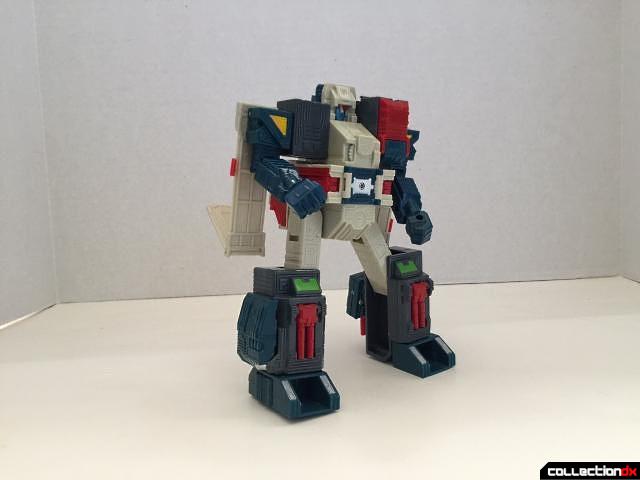 Uranus is just as poseable as Fortress Maximus. He has rotating hands, an elbow joint, shoulder rotation, leg rotation, sideways thigh articulation (for the transformation), and an ankle tilt (also for the transformation). The downside of all the joint is that they make Uranus extremely floppy, as he does not use any locking mechanisms. The tower halves, the gun on the left leg, the legs, the arms, and the ramps on the back of its arms flop around when when Uranus is shaken, making him somewhat annoying to play with. 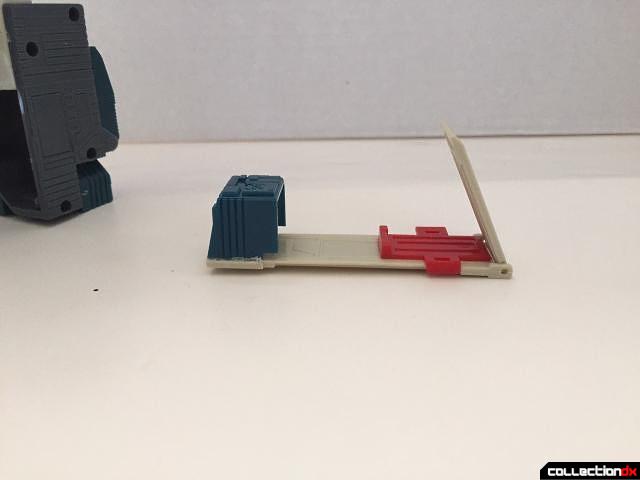 Unlike Fortress Maximus, Uranus's ramps can't fold up all the way, making Uranus even harder to display on a shelf, and due to the loose joints, the ramps keep on falling down. These ramps are one of the worst parts of the toy. 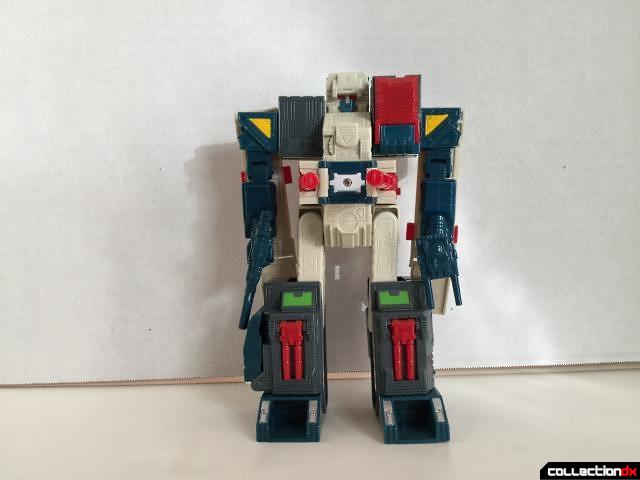 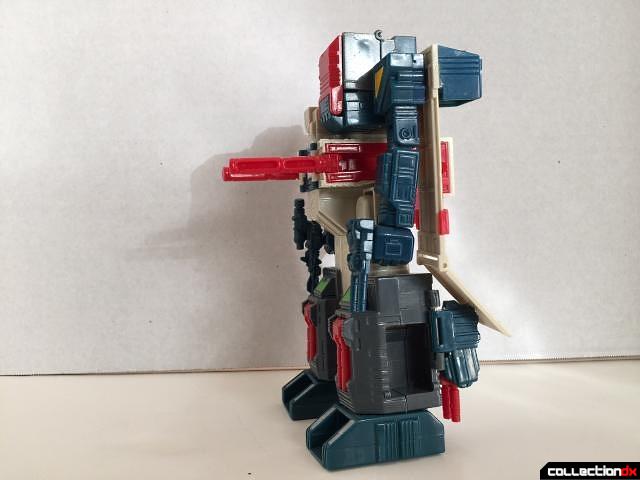 The only hidden weapons on Uranus are the abdominal guns. The guns on the calves can't unfold, and the folding gun on his left leg does not have rotating gun barrels like the original. And speaking of the folding gun... 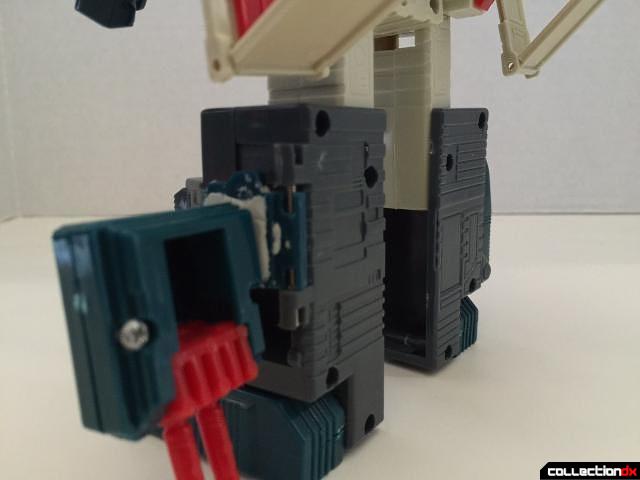 The folding gun is possibly the most fragile piece on Uranus. On my specimen, I actually had to repair it once. The gun does not lock, and it will just flop around when you play with the toy. 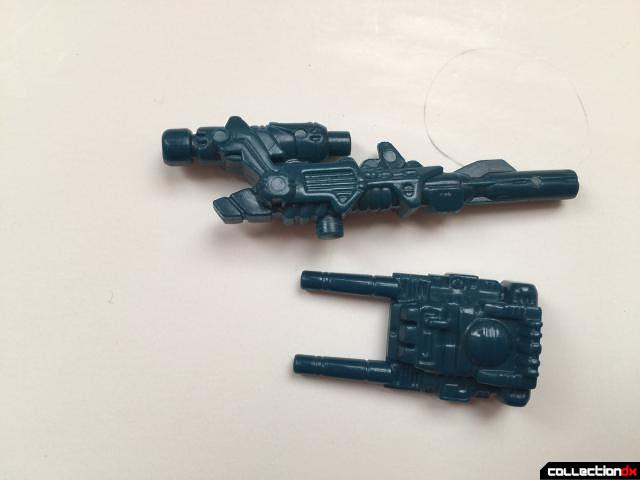 At first, the prospect of having two miniature versions of Fortress Maximus's guns seems extremely cool, but these guns do not like staying in the hands. Since Uranus's hands have a loose swivel, they might swivel down and cause Uranus to hold the guns gangster style, and to add insult to injury, the pegs that hold the guns in the hands are so loose that the guns might fall off in the process of rotation. 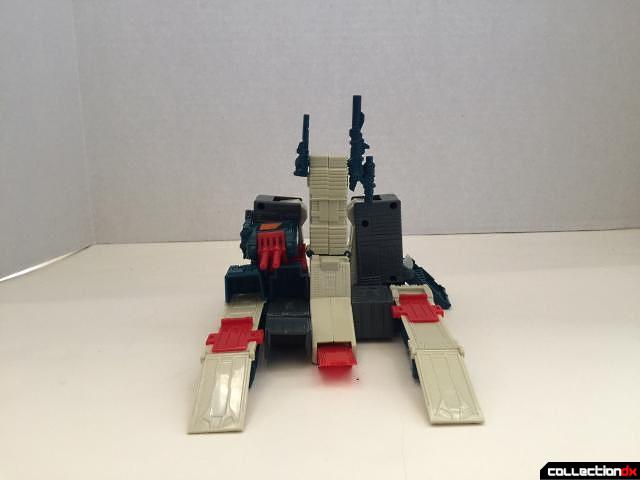 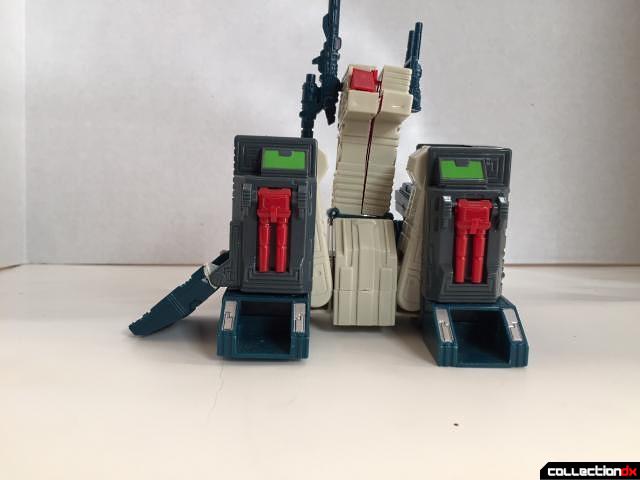 Transformation into city mode is exactly like Fortress Maximus (in other words, easy), but the resulting city is the exact opposite of Fortress Maximus's sturdy city mode. When you pick it up, the arms flop down, the tower does not feel sturdy, the center ramp lifts up and the folding gun just flops around. The internal elevator is gone, and the launcher is also not present (it is to be expected from such a small toy), but the arm ramp launchers still remain. The two red launchers are so tight that they can't really launch anything, and are next to useless. The most sturdy thing in this mode are surprisingly the two guns. Due to some screws, Uranus's legs can't fold up all the way, and are slightly sticking out. 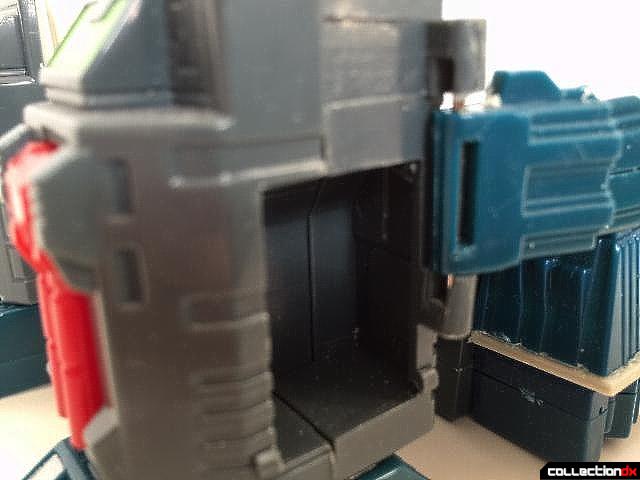 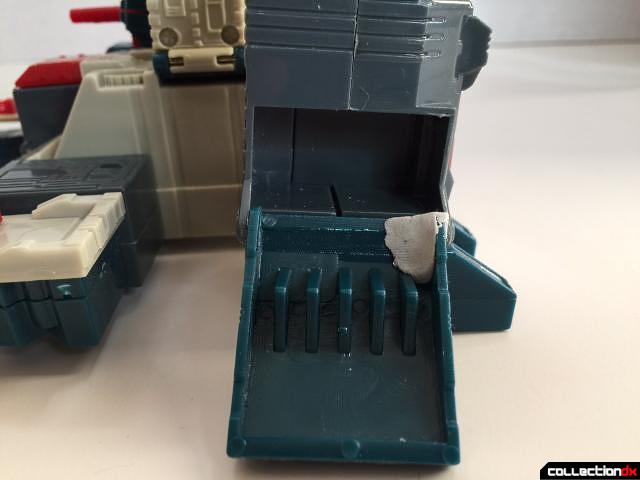 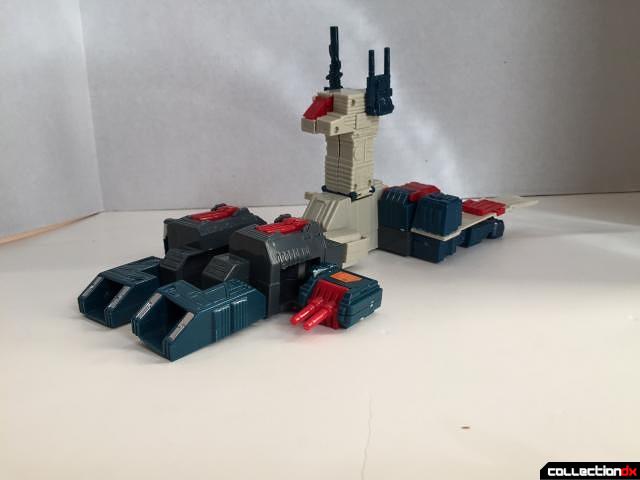 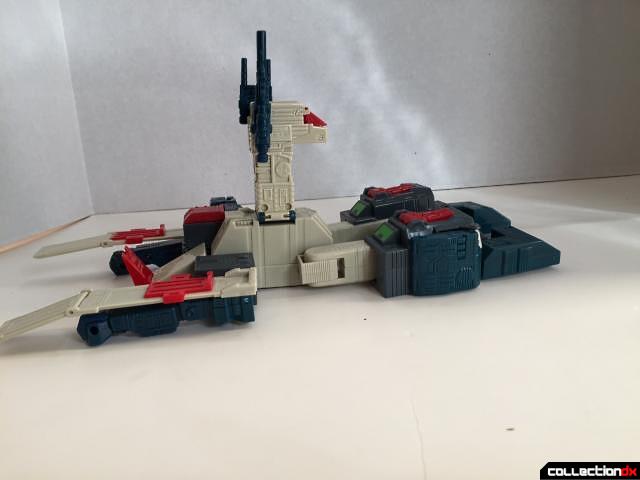 In battleship mode, Uranus looks better than in city mode. It looks somewhat simple, but due to its simplicity, Uranus can pull off this mode much better. It has no rolling wheels. 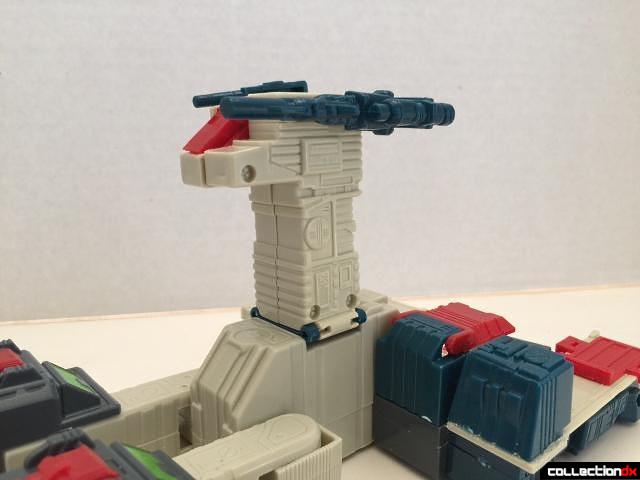 The guns can also be rotated down and assume a shooting position. 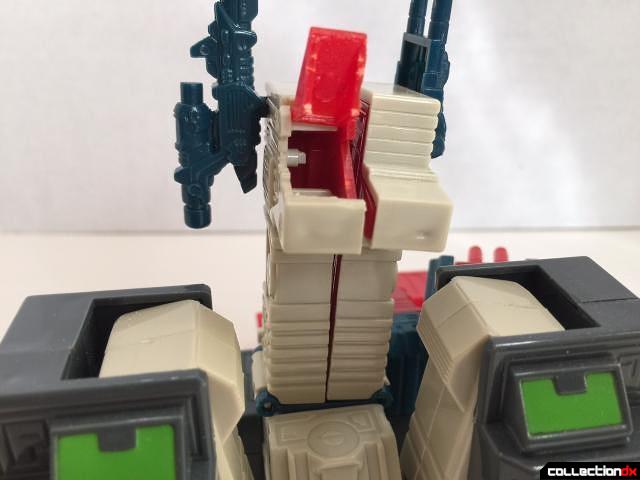 Surprisingly, Uranus still features an opening window on the tower even though it is now opaque red and the compartment inside is too small to hold anything. 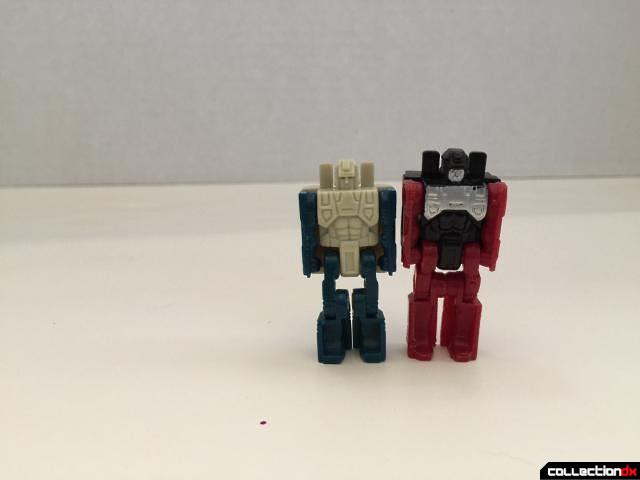 The reason why I bought this toy instead of the new one was because of the working Headmaster. The Headmaster in this set (who has no name) is an extremely retooled version of Spike from Fortress Maximus. For the purposes of this review, he will be called Uranus Spike. He is shorter than Plasma (the version of Spike From Brave Maximus), and with good reason. His legs had to be shortened in order for him to become the Head of Uranus. 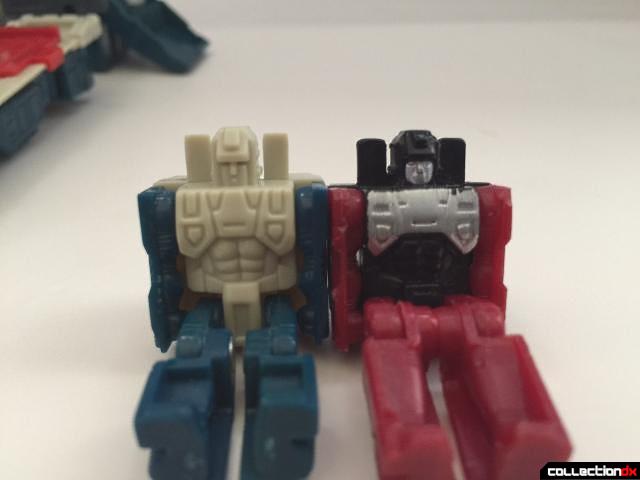 The head and torso of Uranus Spike have been retooled from Spike and has a simplified head and a torso with thicker indentations. The shorter legs are now separate pieces and can move independently. 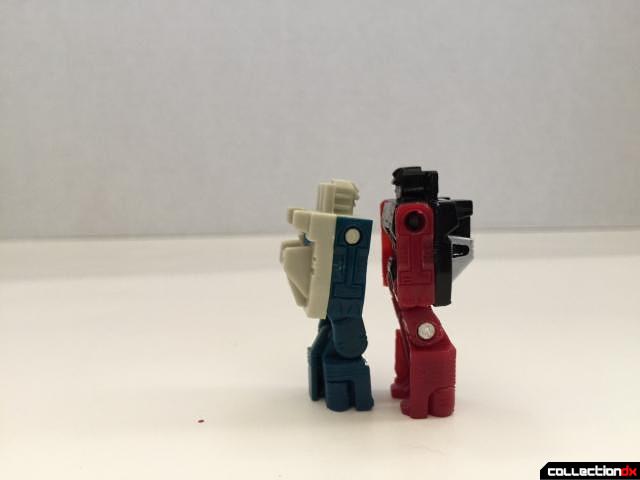 Uranus Spike also had his arms modified so that they can't move. The top corners of the arms are now square and prevent all shoulder movement. 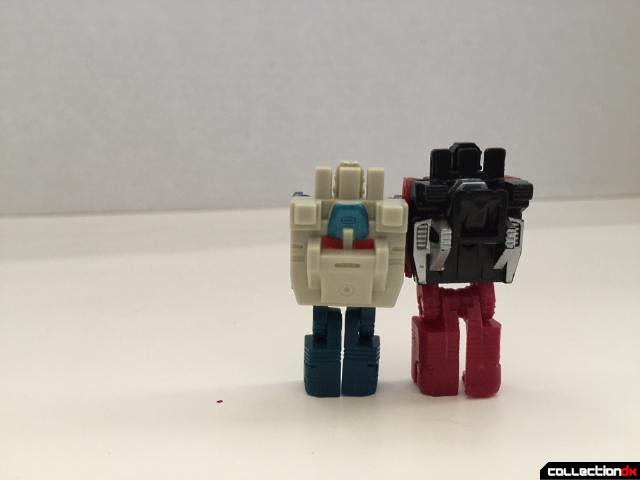 Uranus Spike does not have a flap to cover up his large head's face, and the two outside tabs which push down on the tech spec tumblers are narrower than the original (the piece in the middle is unaltered). 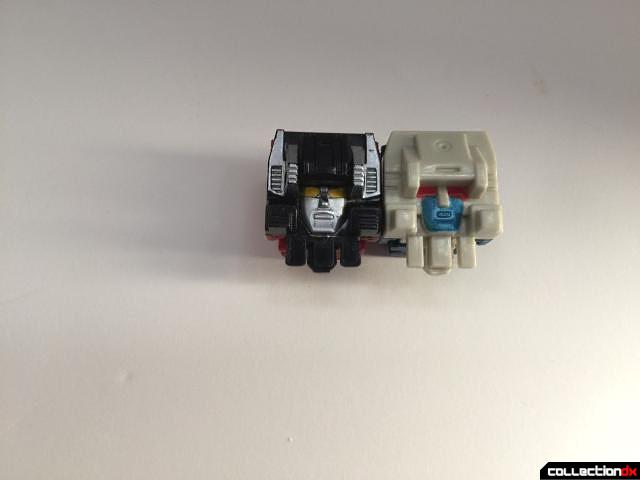 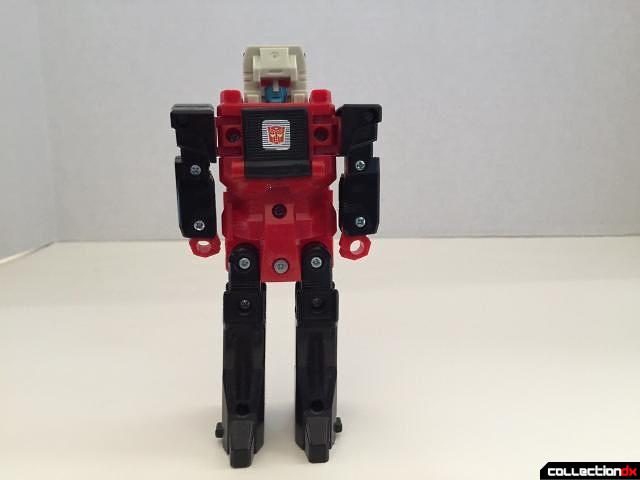 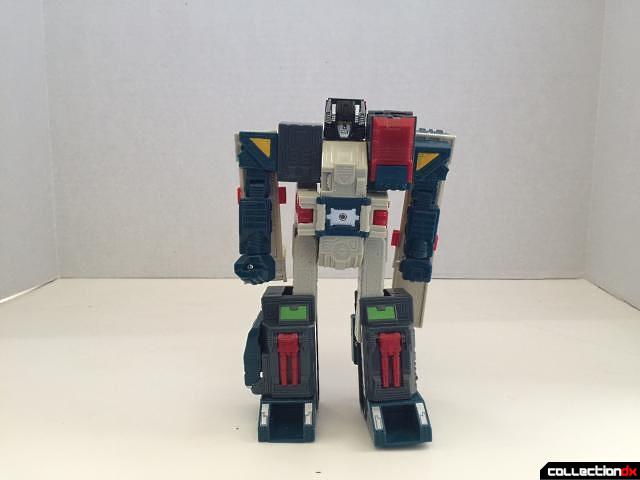 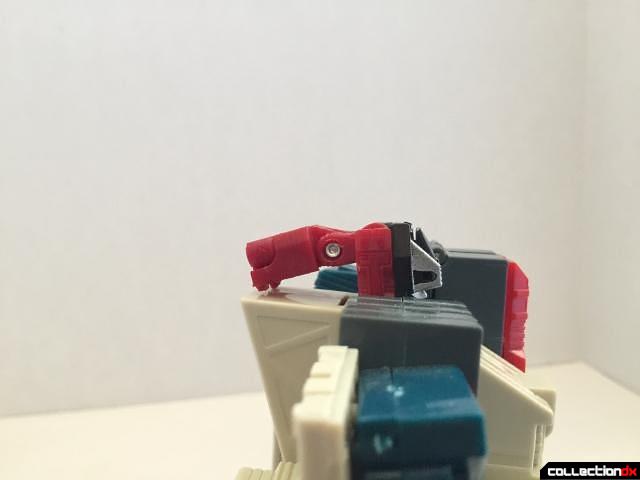 The legs of a normal Headmaster must point back in order to fit into Uranus. 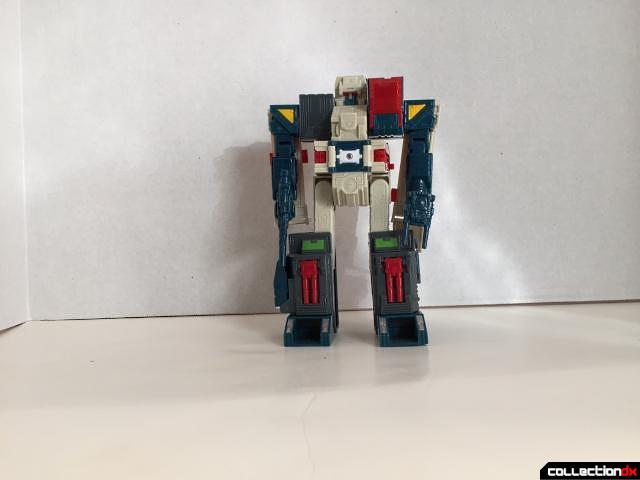 Uranus is extremely floppy and somewhat cheaply made. I do not have the new mini Fortress Maximus, so I can't speak for its quality, but from what I have heard, Uranus is the worse of the two. I do not wholeheartedly recommend this toy because of the low quality, but the idea of a Fortress Maximus that fits normal headmasters is quite fun. If you can find this toy for a low price and you are a fan of Transformers knockoffs and/or Fortress Maximus, it would make a great conversation piece or a nice companion for Smallest Transforming Transformers. It is not a good toy for children (like most bootlegs), but it makes an excellent display piece and I am fine with that.

I've been waiting for someone to finally review this. I've seen Uranus floating around on the web for some years now. I used to want one, but now that I finally read a review for him I will pass. On my page I reviewed the second (more superior in my opinion) KO version of Fort Max and you should check it out! Btw, if you plan on keeping Uranus for a while, I know of a great and easy way to fix loose joints. Get a bottle of "Pledge Floor Care Finish" (formerly known as "future finish") It's the one that has "multi surface finish" on the bottle next to pictures of a tile and hardwood floor. All you have to do is dab a Q-tip in the bottle (it doesn't take much) and let the solution run into the area that's loose. Leave the figure alone and let it sit for about 24 hours and BAM! No more loose joints, no more drooping, and no more slouching! I've tried it with KO's as well as vintage figures and it works very, very well! Since the solution is clear and thin clean up is a breeze. If some gets on other areas of your figure just dab it off with a piece of paper towel. It won't damage paint or plastic. I'd be careful about using it on a figure with loads of stickers/decals though. Other than that, you're fine.

wow, for a scaled down knock off that looks ugly.