It used to be rare to find Transforming robot toys based on female characters, but within the past couple of years all of that has changed and bootlegs are no exception. Mosquito comes from the quick change line with several other insects themed robots. Here is a link to what she is supposedly based on: here. l Unfortunately to the best of my knowledge the other three haven't been made into bootlegs and released in the Quick Change line. However, the ladybug had a simplified version made and released a few years ago. I've made a review about that one. 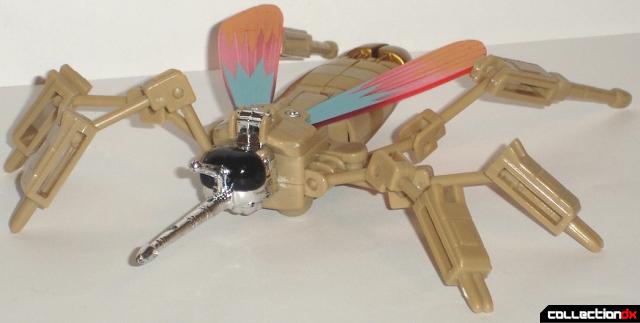 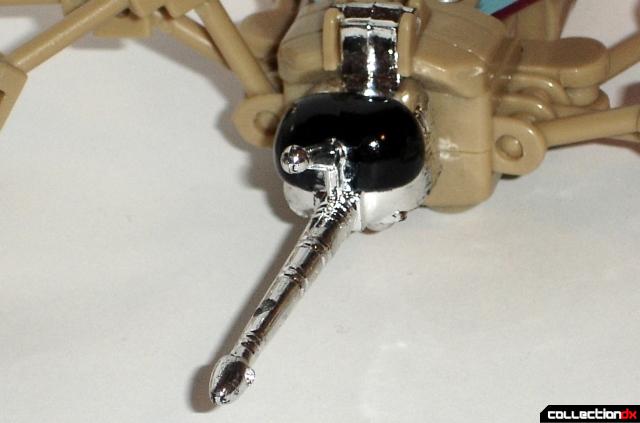 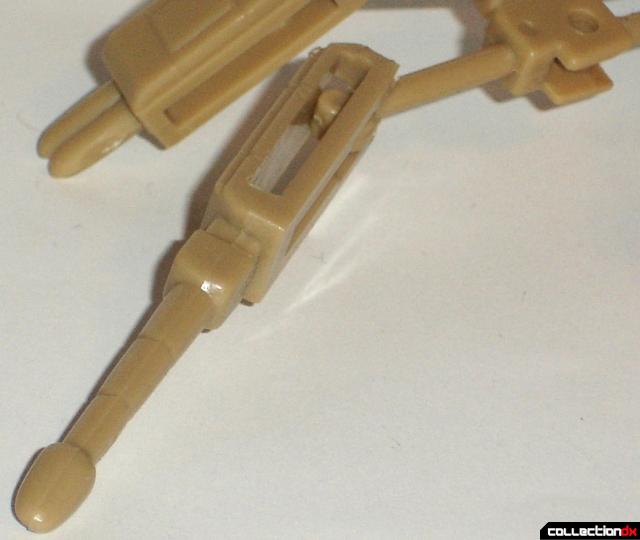 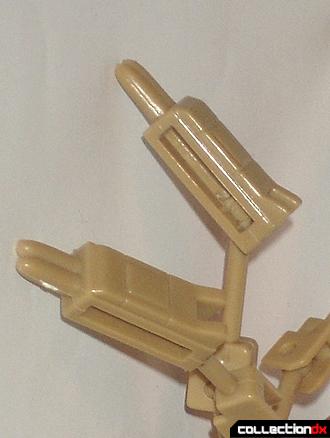 In insect mode Mosquito has long, spindly legs which contain three points of articulation each and a chromed out head with a long proboscis. 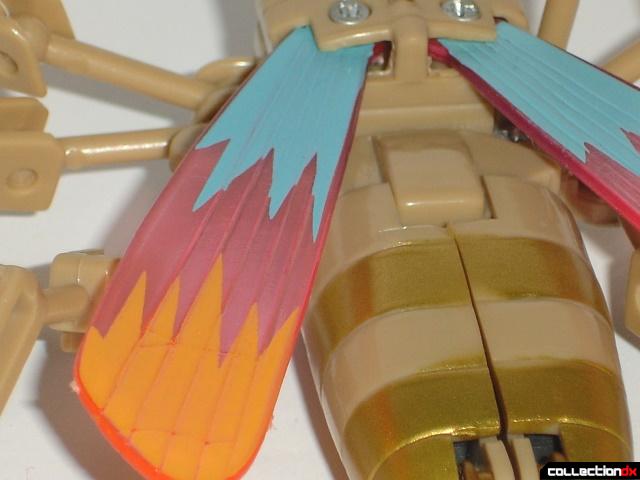 The wings have a nice blue, pink, and orange pattern painted on them. The wings can also move from side to side but are very stiff so I had to be careful not to break them. The head flips up, but only because it's part of the transformation so I'm not sure if that should count as articulation or not. 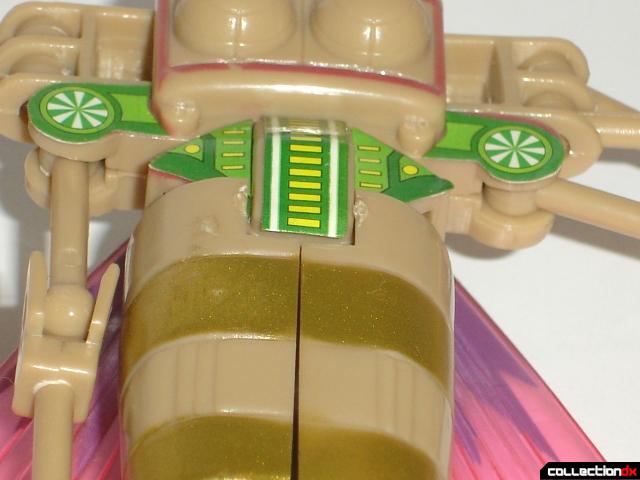 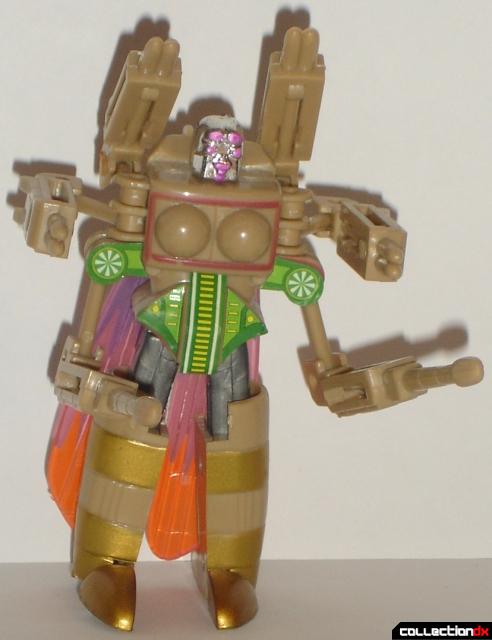 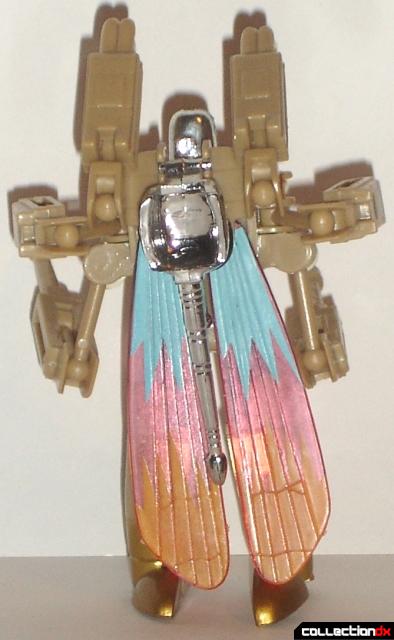 In robot mode all of Mosquito's legs all fold up and become weapons. The front legs are shoulder mounted dual missile launchers, the mid legs are the same type of weapon but the only difference is that they are kept at her side, and the extra long back legs hang slightly below her waist and can either be long barreled laser guns or missile launchers. I'll let your imagination be the judge of that. 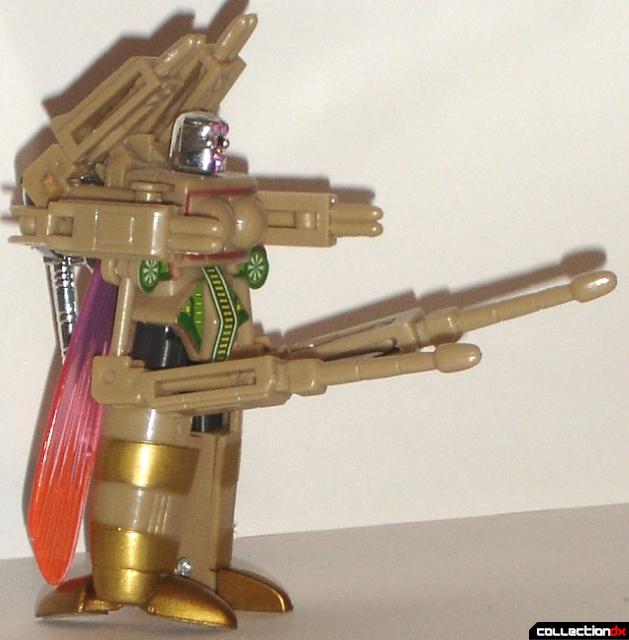 I've seen pictures where the weapons are arranged in different positions so I don't think there's really any "official" way to pose them, this is just my preference. Before any of that, the first thing you may notice is her...uh...extra "equipment." Hence why I refer to her as female...anyway ignoring the chest mounted cluster bombs, the only extra colours in this mode is a purple square around "that particular area" and the cheap looking stickers again. 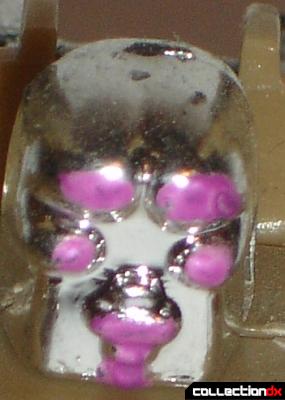 Her head is 100% chrome with lavender dots of paint on her eyes, faceplate, and what looks like eyebrows...or maybe extra eyes since she's an insect type. Her legs barely move from side to side but I'll mark that down as articulation.

Nothing is loose, transformation is smooth, and the plastic used is a decent quality. As I said earlier just be careful with the wings and you should be fine. I highly recommend this figure especially if you're into collecting either fembots or insect-based mecha.

Surprisingly accurate that this would be a female character, since only female mosquitoes suck blood. +1 for scientific accuracy, makers of Quick Change!

Oh yeah, I forgot about that. Seems like the insect/arachnid world are both completely female dominant. Depending on the species, it seems like the males almost always die after mating (black widows, ants, praying mantises) I wonder if male scorpions also have to live in fear? Lol.

Also released by Trendmasters as part of their Masterbotix line

Hey, that's the same exact packaging that my butterfly robot came in from way back when! This version was released in the 90's right? It's good that this version of the Mosquito Bot came with her weapon, but $10.00? Really?