The world of bootleg Jumbos is one of my favorite things to delve into. I've always taken great pleasure in finding, and hopefully even acquiring, some of the strange toys that few others would be interested in, those toys that would offend the sensibilities of the collecting purist. This Mexican offering might be one of the strangest out there, perhaps rivaled only by the Mazinger Z: Paladin de la Justicia and the Ring Toss Mazinga for just plain blow your mind craziness. Or perhaps ugliness, depending on your point of view. 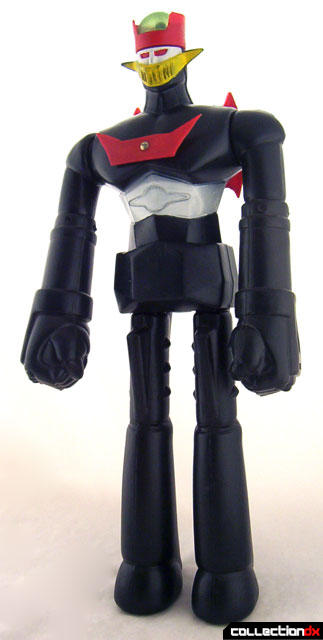 I've known about this toy for a long time, nearly as long as I've been collecting in fact. It was featured in an article on the old Cool Japanese Toys website. Unfortunately, the toy is extremely rare and it's been a real challenge to get my hands on one. I did manage it several years back, but the specimen I got was nowhere near complete and I chose not to review it for that reason. But I've recently been able to upgrade so I'm glad to finally be able to do it now. 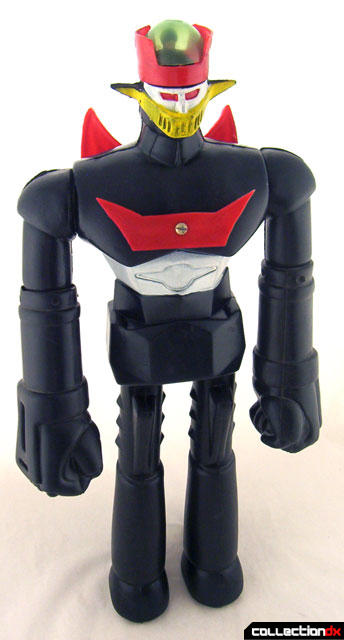 This version of Mazinger stands 21" tall and actually uses a modified version of the body from the Reideen Jumbo Machinder. Some of the changes made include using a mirror image of the right hand for the left, both fists minus the shield. Also, the missile launching mechanism in the stomach has been removed and simply filled in, although you can still see the outline of it. And of course, a new sculpt of the head of Mazinger now rests on it's shoulders. And it's a, shall we say, "interesting" take on the subject. 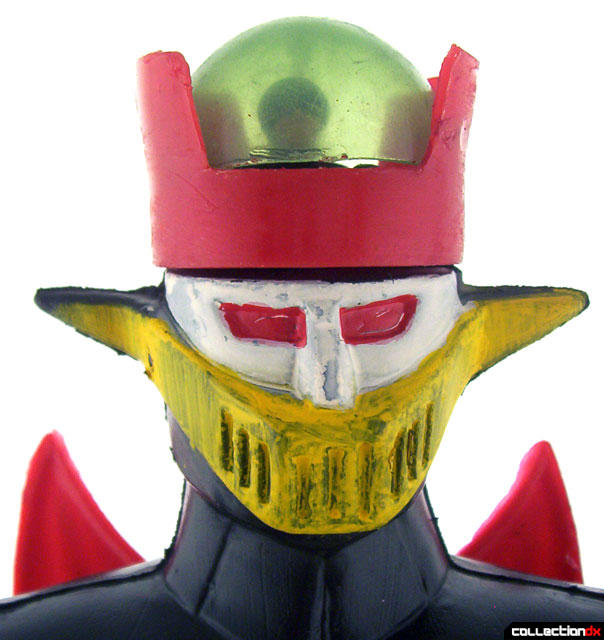 As you can see, the colors of the face are painted right on to the polyethylene. Since paint doesn't stick to polyethylene as well as to something like vinyl, it's not uncommon to see it in poor condition. The paint of my last specimen was no where near as nice as this one. It should also be noted that the white of the stomach is painted right on.

Now, the best part of the head is the cockpit. It's very crudely made and all the more charming for that. The red upper part is shaped much like the bottom of a cup, with a clear dome in the center. What appears to be an action figure that has been cut in half is screwed into the bottom. 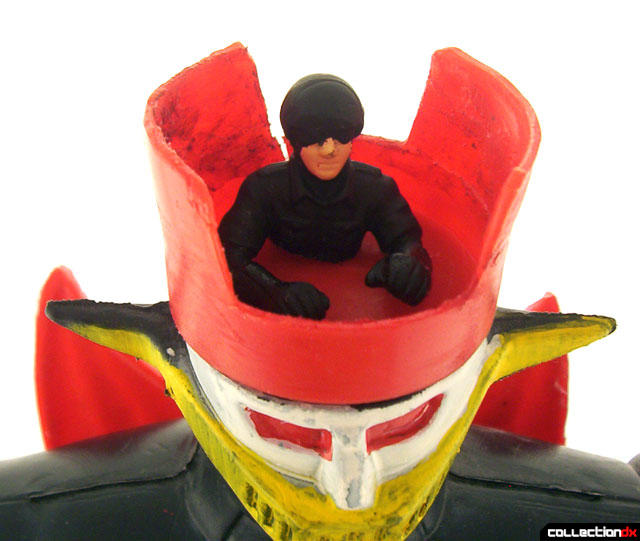 Mazinger's chest plate is a simple flat piece of plastic that has been screwed directly into the chest, despite the fact that there are two small holes in the chest that appear to be there to allow two pegs to connect. This is the way the wings on the back connect. And, oh man, those wings! BAT WINGS!!! 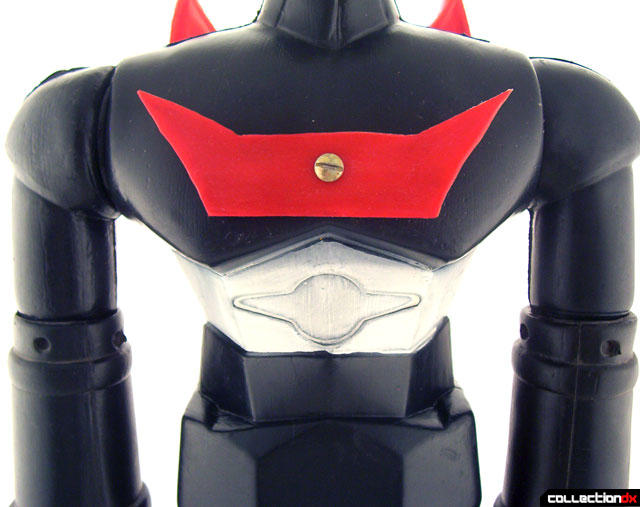 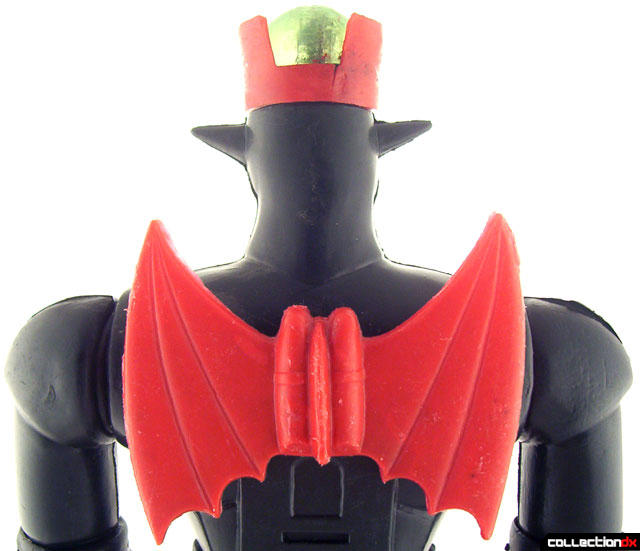 The thing I love about those bat wings is how small they are in relation to the rest of the toy. You would think that by choosing bat wings you would want it to have a sinister appearance, but by being so small, it ends up being somewhat cute, like a fairy.

Even though this toy is very rare (I only know of 4 as of this writing), not all are the same. Some have white hands, while some have black. And even amongst the limbs that should be all the same color, there seems to come in varying shades. Some pitch black, some dark grey, etc.. At least one that I've seen has the head piece cast in white.

A comparison of both specimens I've owned. Note the white fist and lighter colored legs on the left. 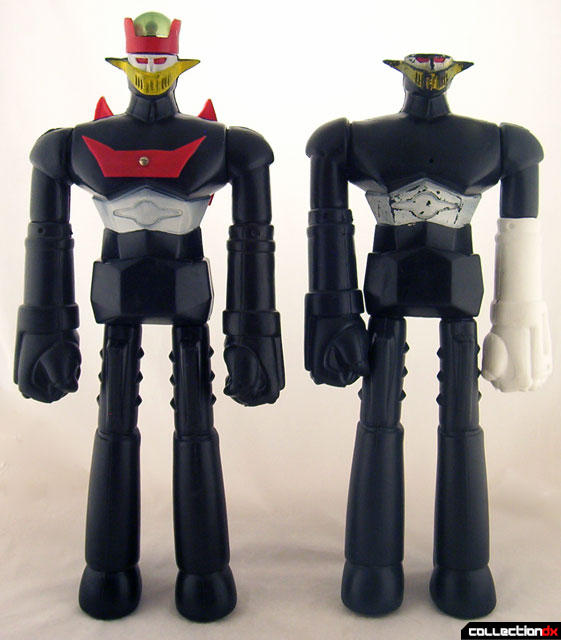 This toy is probably the rarest known Jumbo to originate in Mexico. It's very, very difficult to find, but due to it's crude sculpt and inaccurate portrayal of such a popular collector, it's not one that I think too many people desperately want. Like many of these bootleg toys, it's a curiosity and desirable more as a historical artifact than as a toy. I believe this toy is rumored to have been sold in a bag with a header card. If there are indeed two others in the series as the old CJT article suggests, they have yet to surface. But if and when they do, you know I gotta get'em! 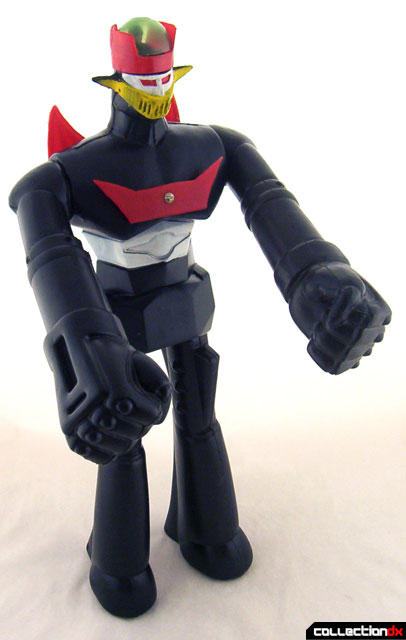 It's like the illegitemate love child of Mazinger and Big O...

That's exactly what I was going to say.

What a great boot! I love the head sculpt and clear glass bubble head, very creative it must be insanely impossible to get a complete toy!

Again, Nekrodave's bootleg review is a sight for a sore eyes. Where do you got these things.

Man, I wonder if these guys ever get caught for doing these boots.

Hello, Congratulations for this great review!

* I´m from Mexico and I have this curious fact:

This particular Mazinger its called "MAZINGER CHISPITA" (And why in the world is that? you may ask)...

"CHISPITA" means "little spark", and that nickname was given because that was the name of the workshop that "creates" this rare guy.