You may remember about a year ago I recounted a story about how I was lucky enough to stumble onto a rare large sized Imperial King Kong at a small antique store. Well, a few weeks back I was searching for Kong stuff on Yahoo Japan and I saw a familiar face in a strange color. 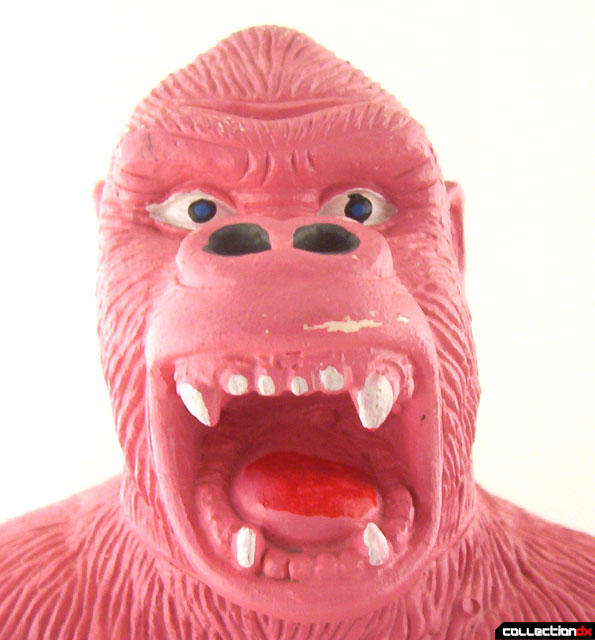 What the heck? A pink large size Imperial Kong? This was certainly an unexpected find. So I managed to win it and began to look forward to seeing it person and comparing it to the original. 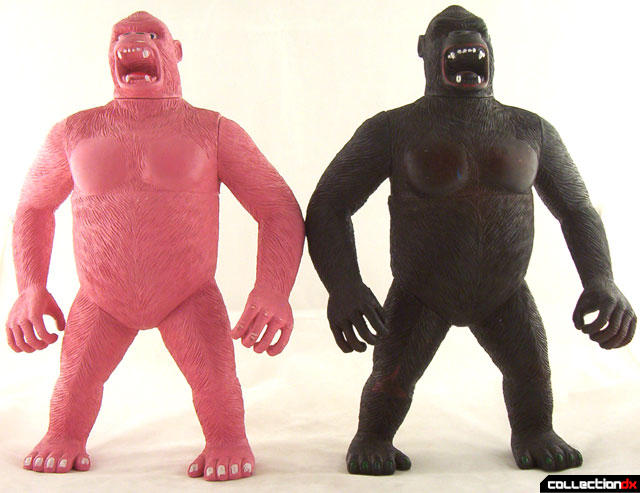 Both toys are the exact same sculpt, right down to the "Made in China" markings on the feet. But the pink one is actually cast in white vinyl and then painted. Strange. 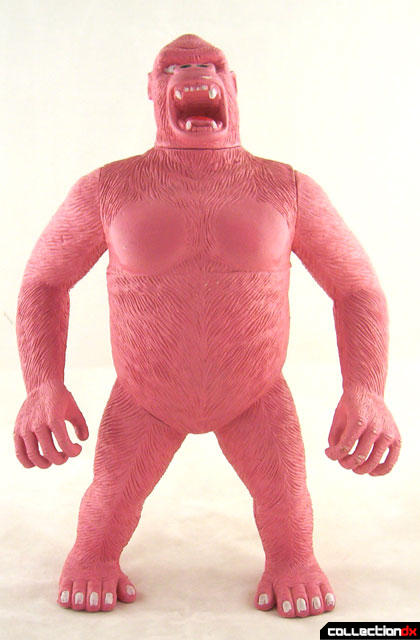 So the thing that I really wanted to compare was the size of both toys. Typically, all the other bootlegs I had are usually slightly smaller than the originals. So I figured if this pink Kong were smaller, it would suggest it's a bootleg and not made by Imperial. I figured a pink Imperial Kong was unlikely anyway. But the size is close. Really close. 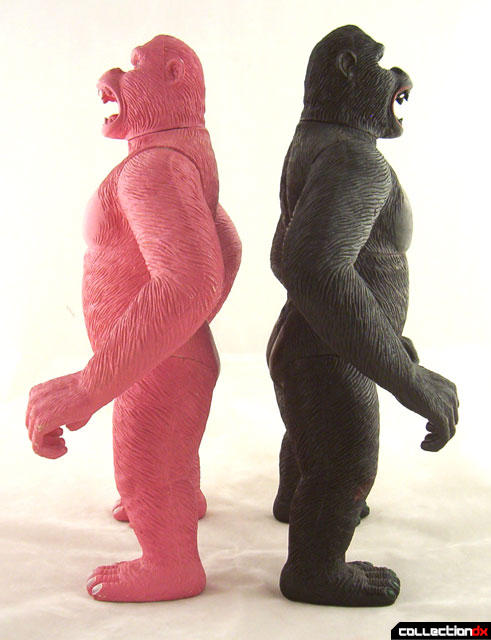 In that pic, it looks like the pink Kong is indeed very slightly smaller. But it's much closer than I would have expected, which made me wonder if I had the legs positioned the same way on both or if there may have been any warping of the vinyl that may account for the difference. There doesn't appear to be, but the difference is still so slight that I'm not sure what to think.

The reason it's important is because, since the original Imperial one has no markings on it, there are still some who believe that that one is in fact a bootleg because other Imperial toys have their company logo stamped on them, but neither of these do. I was hoping this new pink Kong would shed some light on it one way or another. I think the pink one is a bootleg of the original one, but I wish I could say for sure. In the meantime, I'm definitely leaving this one categorize under "bootleg" and will leave the other listed under "Imperial" until there's some confirmation to the contrary. 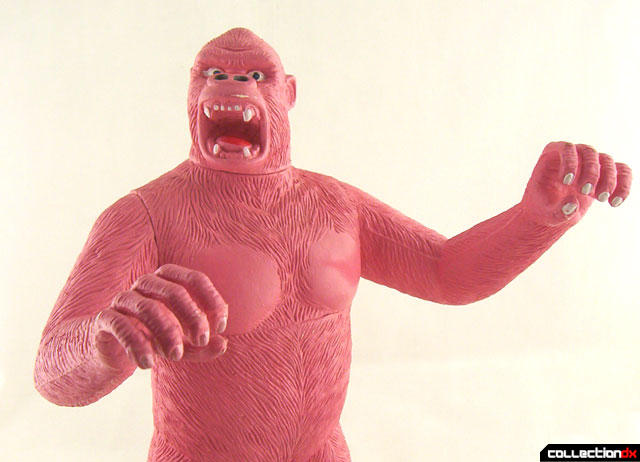 I do know one thing for sure about this toy and that's that I'm glad I have it. The regular version is neat and rare and I think it's cool being the only person I know to have a pink recolor of it. And thought it may seem odd, this not the first or only pink King Kong item out there so it's not alone in my collection. More on that in a later review...

Hey Dave, crazy stuff! I had never looked into Imperial Toys, always thought they were an old, passed away company, but was I ever wrong. At a recent collector show, I found a set of the Imperial 6" strechable Universal Monster rubber figures from 2005. ..and a set of old goofy monster-headed flashlights.

Y'know, I actually took pics of both the carded and tagged Imperial jigglers from the last couple of years, but never posted a "review" of them. Didn't think anyone would be interested and there's not much to say about them anyway. I've probably seen the flashlights, but just don't remember. There's so much monster ephemera, it's really hard to remember it all (for me, anyway..) There's a bunch of Imperial stuff out there, but most of it really isn't that great. But they have their fans.

My GF gave me a full set (I guess?) of those Imperial stretchy Universal guys. They're pretty cool,but what would the review consist of?

It would be almost nothing but pictures. Granted, I've done plenty of reviews that are basically nothing but saying "look, this exists", but usually for older and stranger stuff. Not something that anyone who's gone into a Walgreens around Halloween has likely seen. Who knows, maybe someday on a really, really slow day... lol.

Oh and for the record, the figures released were Frankenstein, the Bride, The Creature, The Mummy, The Wolf Man and Dracula. So if you've got those 6, you've got the full set.

Dave,
Are you sure this isn't Suckadelic's Gay Kong?