Home » Bootleg » King of the Jungle

Getting a newly discovered toy from a place that you don't expect to find one is always exciting enough, but even greater than that is the potential that toy represents. After the first jumbo from Mexico was discovered, more followed. The first time a jumbo from Argentina turned up, it, too, was not the last. And now that jumbos from Peru have surfaced, perhaps the floodgates have opened.

Not long after I got the first Dangard Ace from Peru, another more interesting jumbo toy came to my attention. This time it was not just the same old Dangard Ace mold that we've now seen many times. Instead, a bootleg of the Popy Golion Jumbo Machinder came to light!

But obviously, the thing that sets this one apart from those is the arms. They are clearly not from the original toy nor do they have anything to do with Golion or Voltron in any of his incarnations. No, these are clearly are from the Popy New Tetsujin 28 Jumbo Machinder! 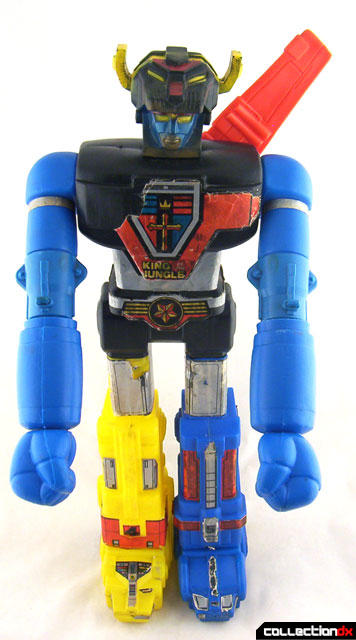 This is pretty exciting to me because there is no other recorded New Tetsujin 28 Jumbo outside of the original. Yet, here are remnants of it on a toy in Peru. Could it be that there is a T28 bootleg Jumbo floating around somewhere in Peru? Or other parts of South America? The mind boggles.....

As you can see, this toy is not in the best condition ever and is missing one of the wings on the back. But I felt it was too important and unique a specimen to pass on. And at first, I was a bit skeptical of it. I asked the seller if he was absolutely sure it even had the right arms on it, since they look so out of place. He assured me that he'd seen the toy in the past and it always had these arms.

Ok, so let's talk a bit more about these out of place arms. As you can see, both fists launch with the help of an attached firing mechanism. This is just like on the Tetsujin 28 toy and my hope until I got it was the the mold was exactly the same. This is because on the original toy, the upper arm is hollow, which allows you to insert the fist, firing peg and all, into the upper arm. That way the arm is shortened to a more aesthetically pleasing length. Unfortunately, here that is just not possible. First, the upper arm does not have that opening. 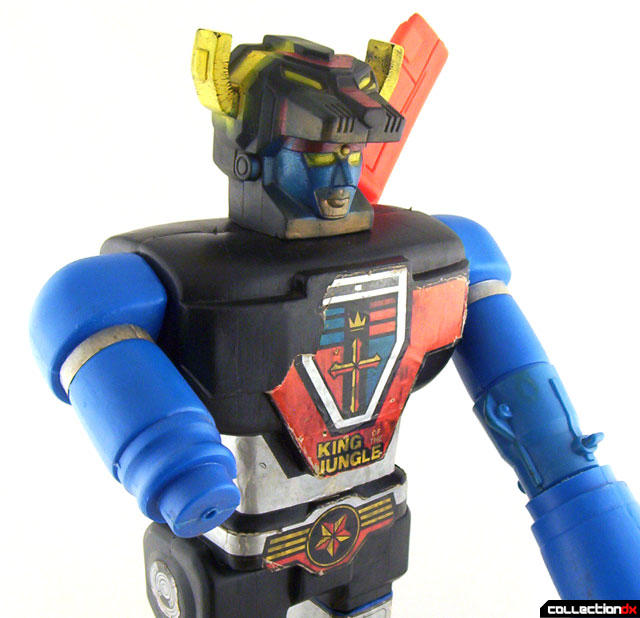 Furthermore, even if you were to remove the launching mechanism and pull out the pin in the hand to try to attach the fist to the upper arm, they do not fit. The end of the fist is too wide for the end of the arm and it would just fall off. So no matter how unsightly those long, gangly arms may be, you have to display it that way. That is, unless of course you are into actually modifying the toy, which just isn't my way.

Now, enough about those arms. What else is unique about this toy? Well, for starters, it's slightly smaller than the LJN version. That means that everything is scaled down including the wings and their connection points. So it's not possible to just get another wing from a common LJN toy to replace my missing one.

Other differences include the fact that the colors of the legs have been swapped. The left leg is blue instead of yellow and vice versa. All of the stickers on the legs are the same as the LJN version (sorry, I don't own a Popy version to actually make that comparison), but the ones on the torso are obviously different. The words "King of the Jungle" are on the upper torso and the waist sticker is a design wholly new to the Jumbos. It does look familiar to me, though. Maybe it's been on other Golion toys? Please comment if you recognize it. 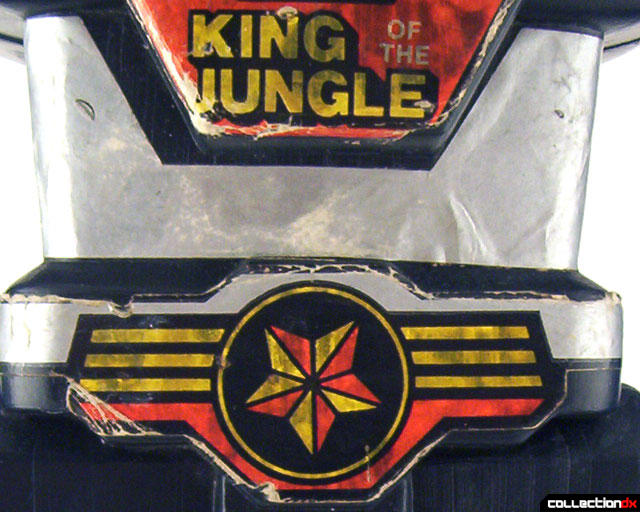 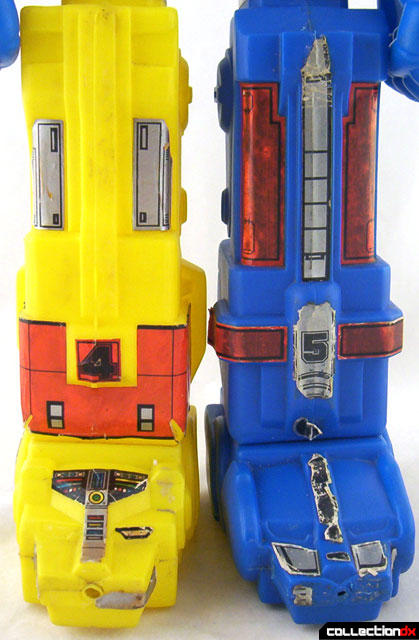 I think the only other interesting notes about this toy that I can mention are that the legs still show the remnants of the missile holders that are present on the Popy Golion Machinder. So, this is clearly molded after that and not the LJN Voltron. The polyethylene body feels pretty solid for a bootleg jumbo, but the head is very soft and squishy. It feels almost like rubber more than soft vinyl. This has caused the paint to crack in many places.

So, overall this toy could be better. Those arms just look so out of place, even if they were a proper length. But to me, the appeal of this thing is more what it represents than what it is.

It boggles the mind! Ha ha

Love to check out the box for this thing.

I'm a bit confused, though. You note that this is slightly smaller than the LJN Voltron, connections too, but then say that you could get an LJN wing to replace the missing one. Did you mean "not possible" instead of "now possible"?

Yes, that exactly what I meant. Sorry for the typo. It's fixed.

Ok, not trying to be a grammar nazi, that one actually confused me.

No worries at all. I'm a grammar/spelling nazi myself. I hate that I missed that. LOL

I just can't keep from looking at this thing. But now I'm thinking the "King of the Jungle" name is appropriate due to the primate-like arms.

I don't know how you find this stuff, Dave...