Hanedaman is a junior machinder that is very similar to another one that I previously reviewed, Space Hero. Strangely, although they share many of the same parts, they were made by two different companies. Where the Space Hero box has the SMC logo on the bottom left corner of the front, Hanedaman has the Ceppi Ratti logo there. It would be great to have a sort of family tree of these toys and the companies that made them, but I'm afraid that's unlikely to ever happen. Just too much is unknown and still undiscovered at this point. 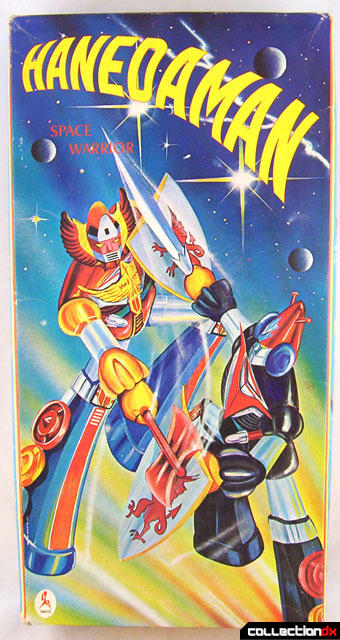 Much like the Kimpo Warrior box, the box for the Hanedaman shows two different robots fighting on the cover and has the head of each on the top side of it. However, there are no boxes to be checked and if a Hanedaman is out there that had the head of Atoranger instead of Combattler V, I've certainly never seen it, not that that discounts the possibility.

As you can see, the toy features the head of Combattler V and the arms of Robo Kress. The legs appear to be at least similar to the legs of Daikengo, which is strange. While there is a very rare bootleg Daikengo jumbo, the only junior Daikengo I have seen actually uses the same legs as Robo Kress. You would think if they had Daikengo leg molds, they'd be used for Daikengo, but I guess not..... 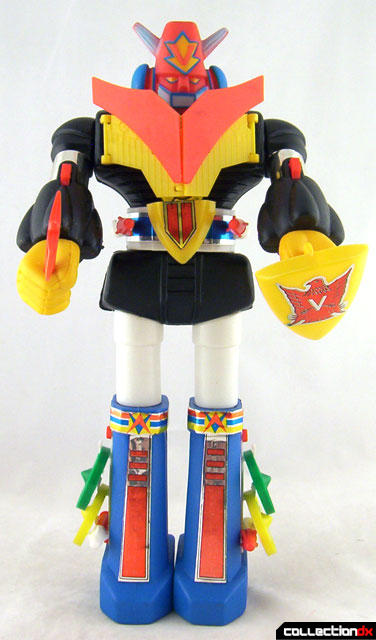 Much like the Space Hero toy, this guy has the same opening chest piece that hides the disc launcher in the stomach and the missiles launcher in the waist. However, this time around a different belt is used, one much like the one from Kimpo Warrior, although as I stated in that review, I've also seen Kimpo Warrior with another belt...the one from the Space Hero in fact. Confused, yet? Good! That means we're having fun. 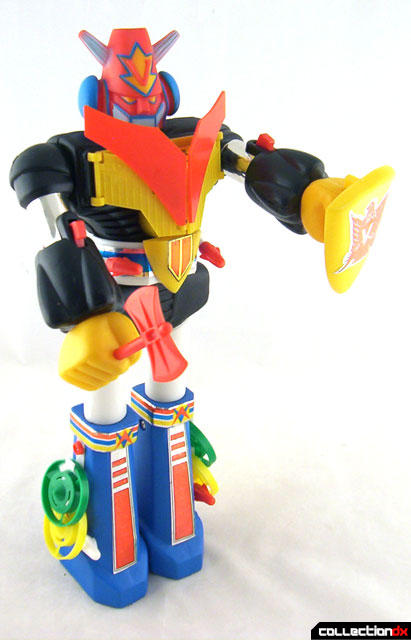 Hanedaman comes with the same shield as Space Hero, but with a different sticker on it. Instead of a chrome sword, it now has a little red ax that is very common on these toys. It's also seen on the Dangard Ace and Jeeg from GC and the Pegas from Tercom! If you're counting, that's one weapon on four toys from three companies. I'm sure there are probably others, too, but these are just the ones I own and have reviewed.

I like the Hanedaman toy better than the Space Hero toy. Not only are it's legs more distinctive, but it's also taller and stand more upright. 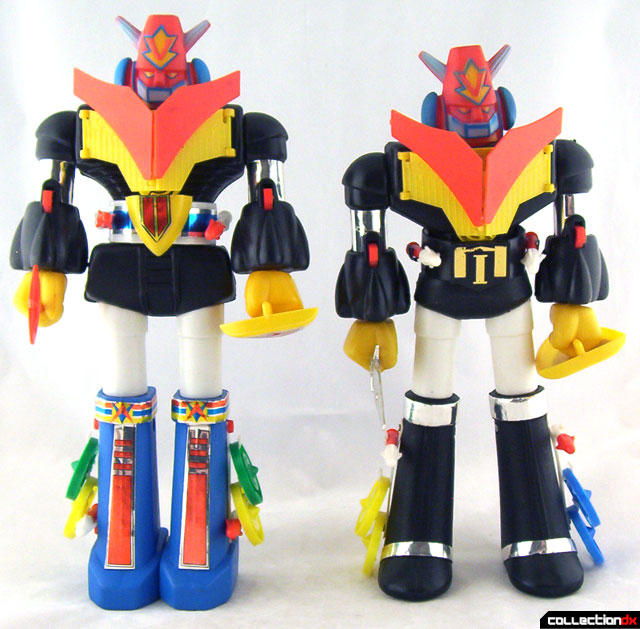 Ok, we're almost done. Just one more thing to mention. As if all that other stuff isn't hard enough to keep track of, naturally, there's also a variation with the Hanedaman toys themselves. When I bought this one, the seller sent me a picture of another he had in his collection (unfortunately, not for sale) that actually has a blue body instead of black! This is the only time I've seen this variation so the black would seem to be more common. Figures, since I like the blue better...

Is there supposed to be an Atoranger JM as pictured on the box? Hanedaman's legs would seem to come from that design. The arms are the same, so the torso and head are the only components unaccounted for.

Not as pictured on the box (that I'm aware of). Either way, I think both images on the top of the box are meant to have the same legs. I think the Kimpo Warrior with the Atoranger head has those legs, just different arms though. I didn't notice until now that Kimpo Warrior and Hanedaman have the same legs and torso. Makes sense though since they are both made by Ceppi Ratti (which is further evidence in my eyes that Ceppi Ratti most definitely could not have acted alone in making the masterful Gundam Jumbo. No way, no how..)

This is the exact same version of the Hanedaman that I own, so it probably is the most common. The Atoranger-headed juniors I have both came in the same exact Space Hero boxes, and one has the Jeeg body (exactly as the SH box depicts) and the other has the same body as the variant on the right you show above. I still keep my eyes open for these guys, but they are fairly tough to come by.

The new Space Hero specimen I got does look a lot like the second robot on the Hanedaman box. Not only does it have the Atoranger head, but I just noticed it also has the yellow feathered wings for the chest, instead of the red/yellow mazinga-like configuration. The colors are different (black instead of red or blue on chest/legs), but it is a pretty good likeness of the robot on the left of the Hanedaman box. It's very similar to the Super Robot junior you reviewed way back, but has a different paint job on the head, and yellow fists. Also, it has a belt, but the launcher is intact behind it, so maybe the Super Robot specimen you reviewed was just missing his belt.

I added a couple of pics of this new guy to my gallery.

This doesn't really belong here,but I just thought I'd let anyone interested know that Target has belts and wallets featuring sillouettes of Combattler V all over them. They're pretty cool.

Man! A buddy of ours was just telling me and Matt Doughty about that the other night. Gotta check these out! I could use a new wallet! ;)

Robot Japan actually broke that news over a month ago, I think. If I had anything my current wallet, I'd grab one. Alas.....