The first Super Shogun, the Stormtrooper, arrived with much fanfare way back in 2010. Teased on it's box was a second release that would clearly be Boba Fett. The people rejoiced, for a while at least. But when the toy did not arrive after a few years, I think many people assumed that the project was dead in the water. Then suddenly it was revealed that Super 7 had partnered with Funko, the Boba Fett was coming after all and at a reduced cost to boot, at least in comparison to the Stormtrooper. Technically however, the toy reviewed today is actually the 4th release in the series, following the original Stormtrooper, the Shadowtrooper (a black Stormtrooper) and a "Kenner version" Boba Fett. A white "prototype" Boba Fett would follow this release. Let's get started with a look at the packaging.

The Boba Fett Super Shogun differs immediately from the Stormtrooper in how it was shipped. While the Stormtrooper came in two boxes, both a brown cardboard outer box designed to pay homage to the Unifive Garada K7 toy as well as a more traditional style jumbo box on the inside, the Boba Fett actually features THREE boxes. You would have received the inner jumbo style box, an outer villain style box and both were shipped in yet another box, this time just plan brown cardboard with packing contents printed on the side. I guess people like the outer box so much the first time that it was decided that it too would be protected like a collectible. 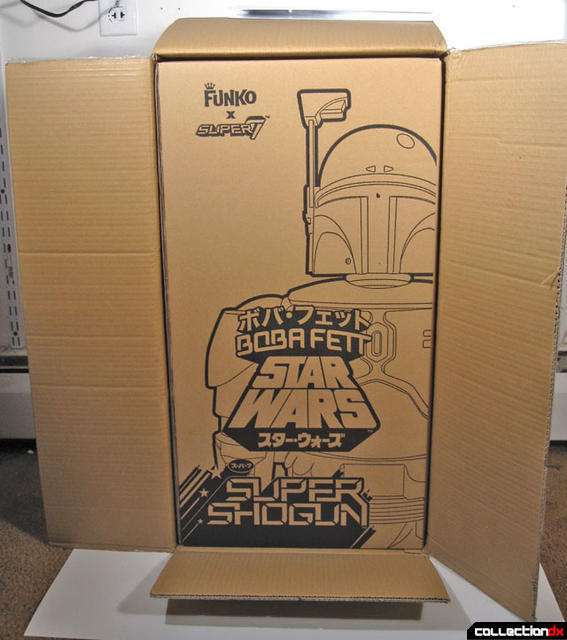 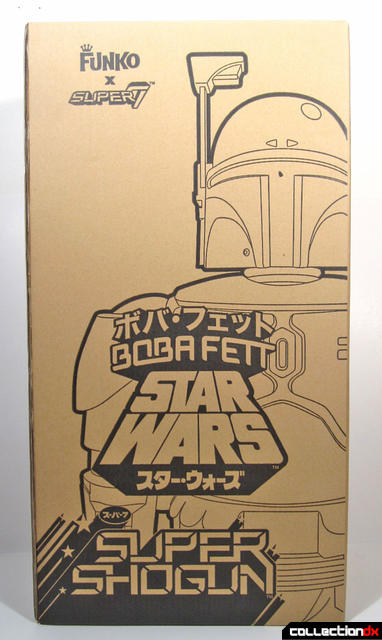 On the one hand, I appreciate the care taken to preserve the item, but on the other, it sure does result in a large package which takes a lot of room to store.

Once removed from it's outer cardboard boxes, the actual toy box is once again a striking piece of work combining classic Jumbo Machinder and Star Wars aesthetics. The toy is shown on the front with his iconic Slave 1 vehicle depicted behind his right shoulder. Basically the biggest difference from the Stormtrooper is just the character and the addition of the Funko logo. 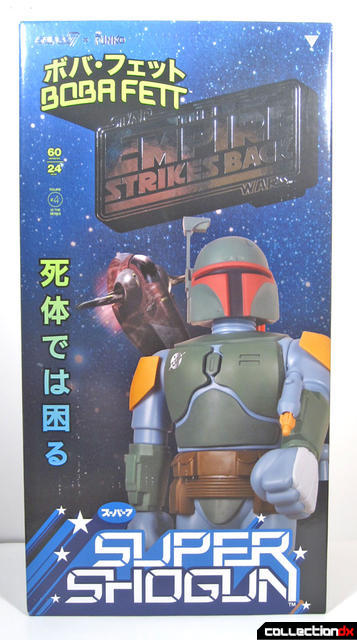 The box for Boba Fett is quite large, even putting aside the outer boxes. Here is how it compares with a vintage Shogun box from Mattel. 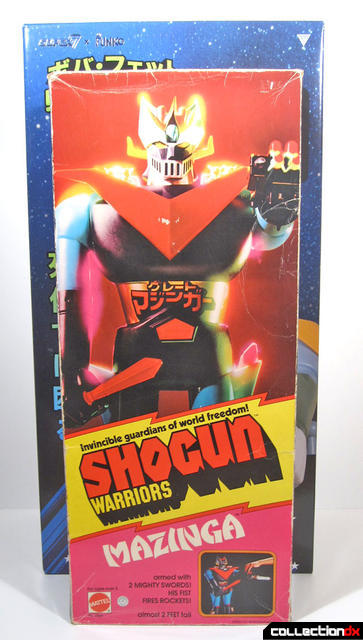 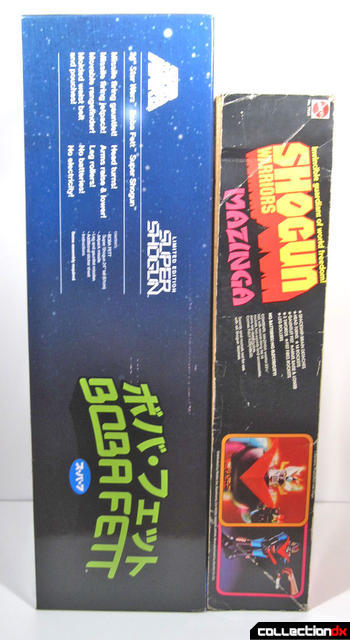 The toy is packed securely inside with several cardboard inserts holding it in place. 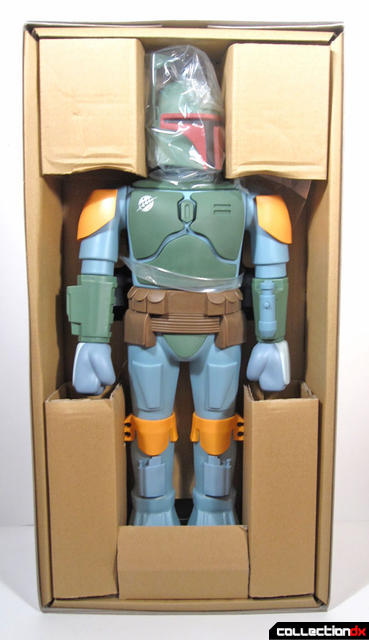 Outside of the box, the toy looks impressive. It straddles the line between simple design and intricate details quite nicely. The static stance and limited colors are nicely complimented by having multiple pieces of separately molded details such as the belt, the the rocket launchers and various pieces of armor. 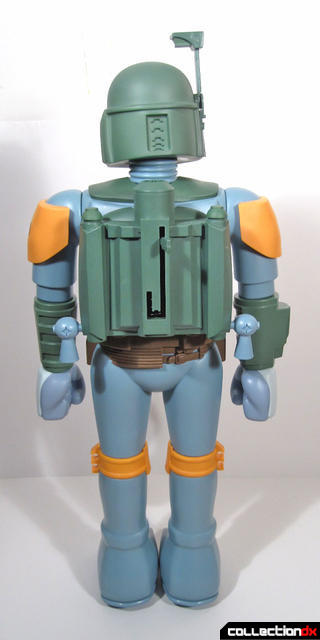 Like most jumbos, there isn't much articulation. The head rotates and the arms raise and lower. That's about it. 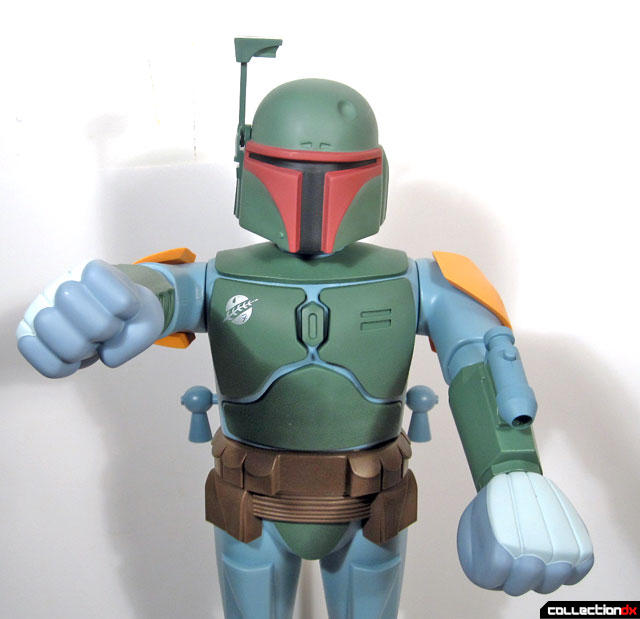 Additionally, the scope attached to the helmet can also be lowered. 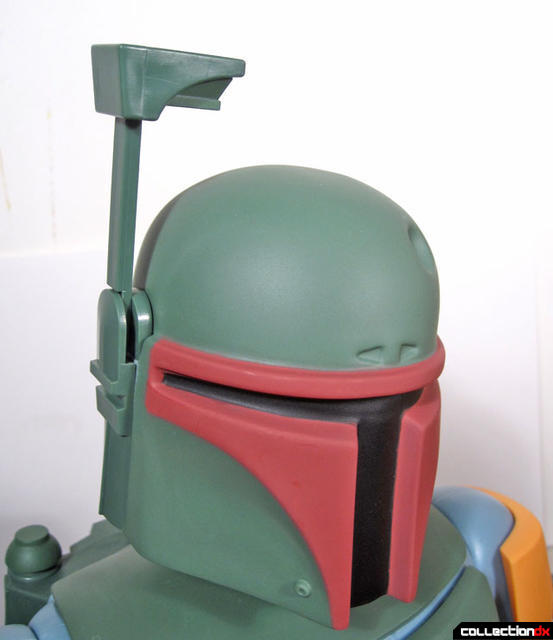 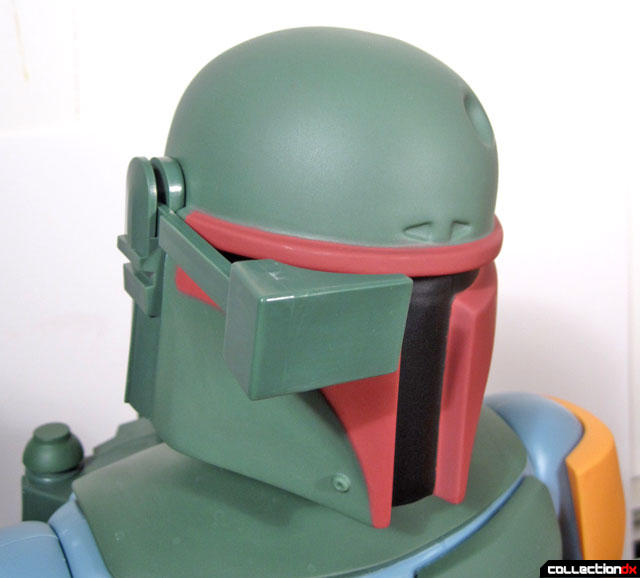 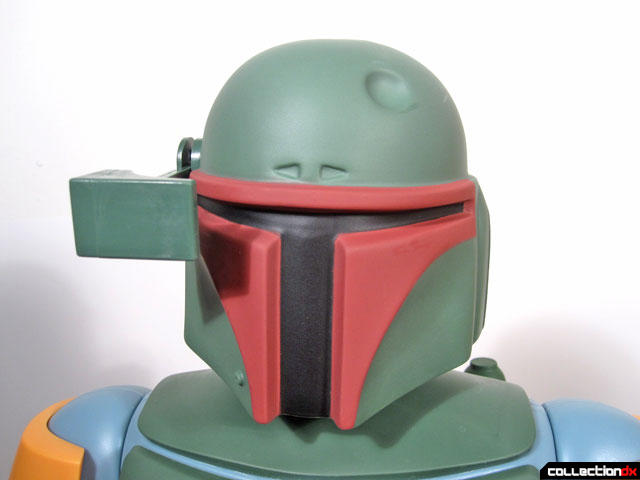 Boba Fett also has his classic rocket launcher on his back and yes, it actually fires a big red missile! 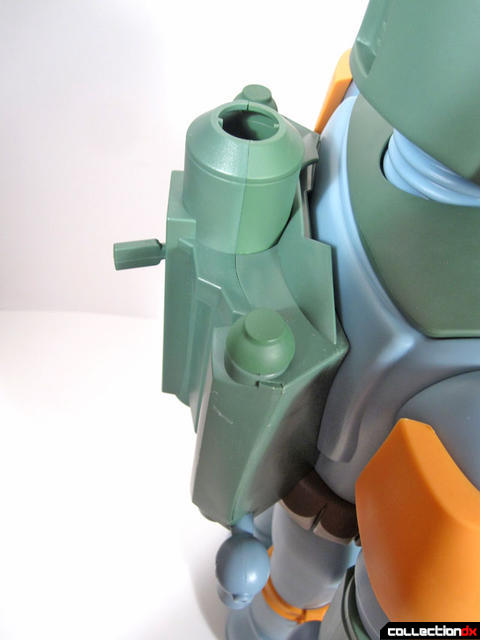 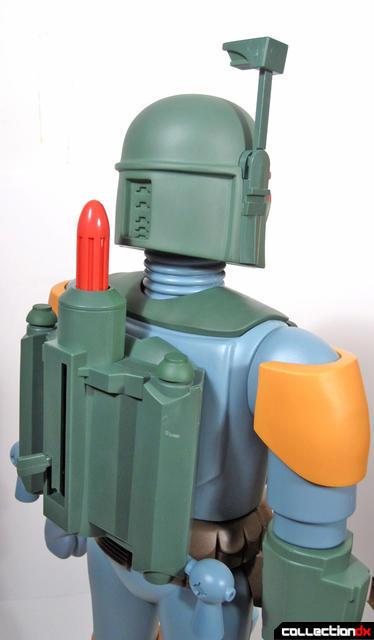 The missile is fired using the classic "J-hook" mechanism seen on some of the vintage Kenner prototype figures. 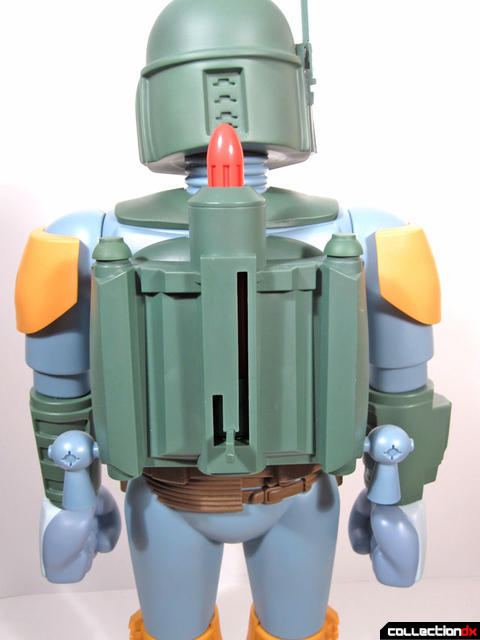 Maybe I'm a sadist, but I think it would have been funny if it was stuck in place! On the contrary, it is actually very loose in the launcher and if you were to tip the toy too far with it loaded, it would fall right out. So the firing pin locks into place but the missile itself does not.

There is also a smaller missile firing cannon on the left arm. This fires traditional style jumbo missiles by pressing a button on the top. These missiles fire with much more strength than the larger one on the back and the missiles can be stored in clips on the legs, like classic jumbos. 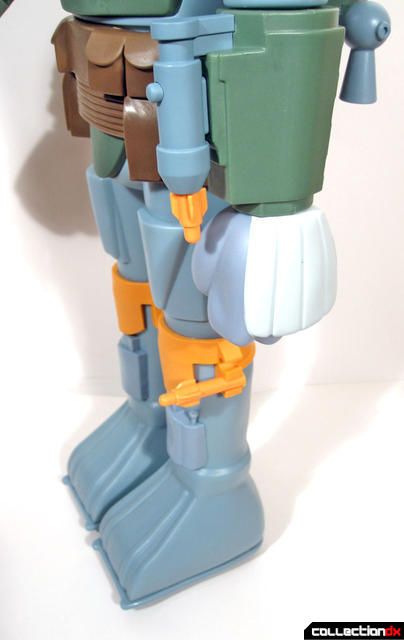 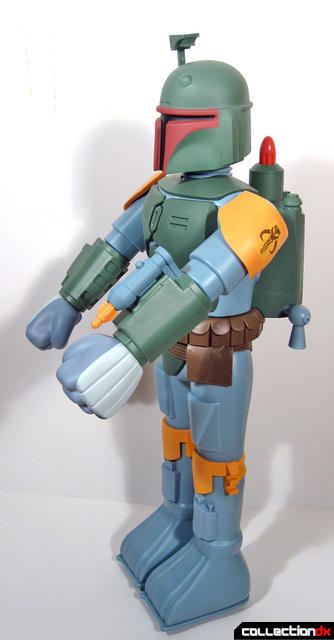 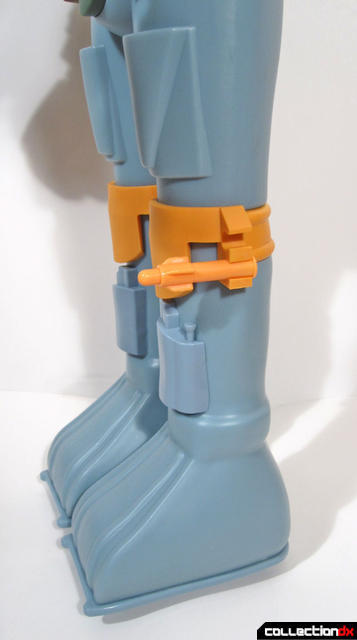 The single most disappointing, and in fact mind boggling, thing about this toy can be seen in those pictures. Believe it or not, the toy has storage room for 4 missiles... but only comes with 2! This is a serious oversight, to put it mildly. I don't even care that the missiles are a simple one piece, one color accessory, but at the very least you have to include enough to actually fully stock the toy. I hated the trigger finger on the Stormtrooper, but at least I knew that was coming before I got the toy. This lack of missiles was a very bad surprise.

The only other thing I don't care for is the sculpt of the feet. Without any coloring, the lines in them kind of remind me of fins for some reason. That's probably just me. At least there's wheels under the feet, though. 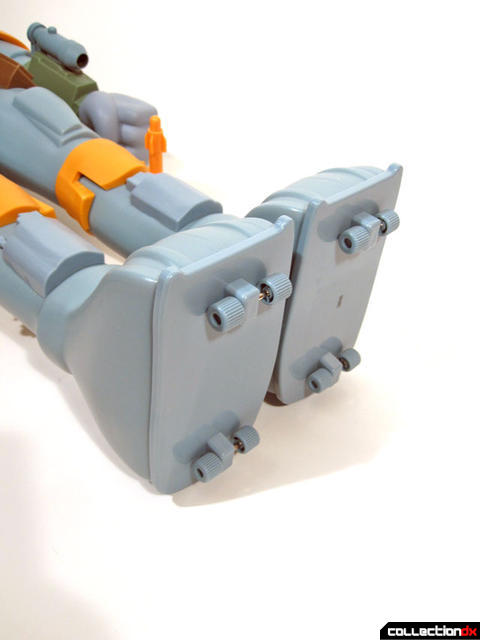 The wheel housings are actually molded directly into a separate platform that are attached to the bottom of the feet. It kind of looks like he's riding two little skateboards. 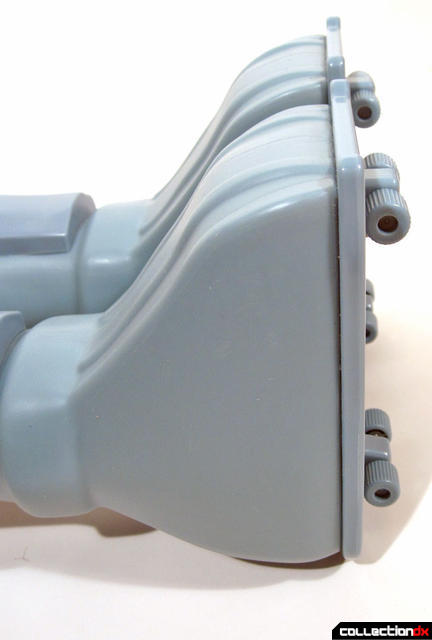 Several stickers are included with Boba Fett than you can apply if you should so choose. These include his name in both English and Japanese, crests for both Fett himself and Mandalore in general and best of all several wookie pelts! I usually do not apply my stickers but those pelts are very tempting! 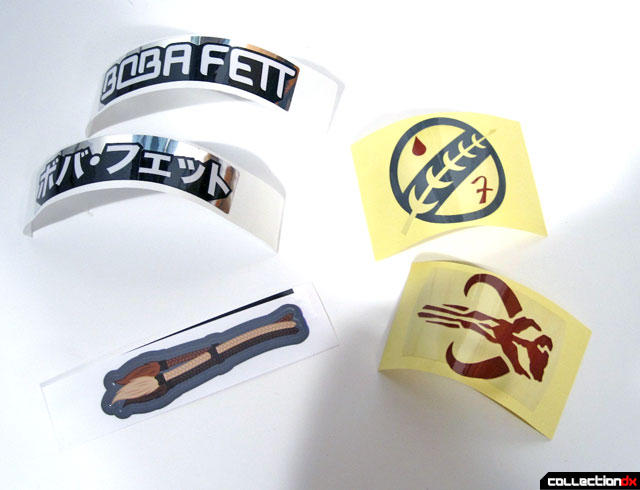 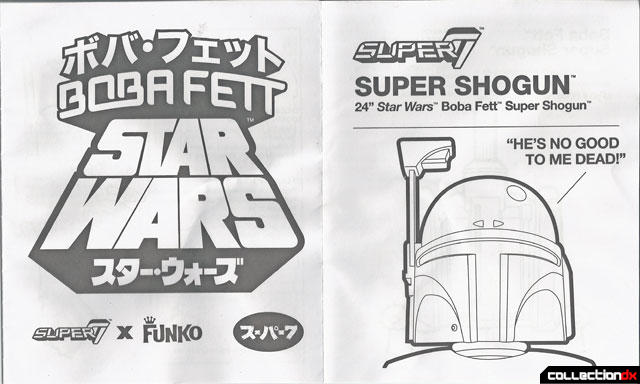 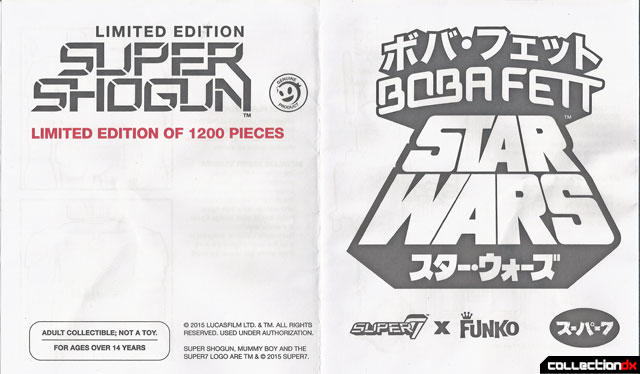 Ultimately, I like the toy a lot but honestly, whenever I think of it, I just think of those missing missiles and shake my head. Seriously, how does that happen?