Super Worrior here holds the distinction of being the only jumbo that I have ever sold without having an extra to take its place. I didn't do it simply because the toy is ugly, although it certainly is that. 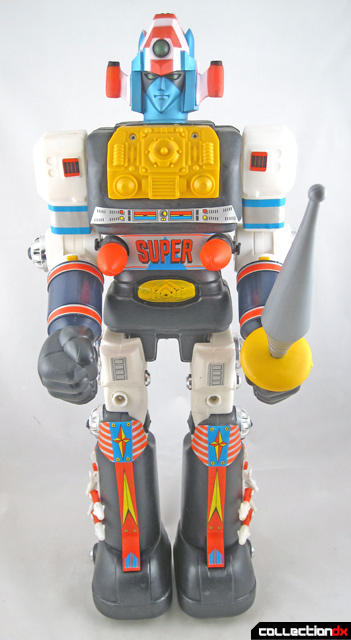 Before getting to that though, let's cover the basics of the character and trace its jumbo lineage a bit. Obviously, you can see the head comes from Daimos. He even shares the same large missiles as Daimos. The arms and torso are taken from Leopardon. The sides of the waist, however, have been curved inwards to allow for the addition of the missile launchers. 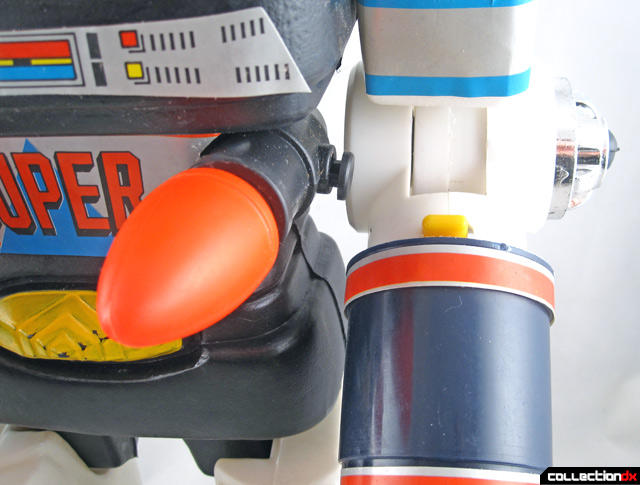 This doesn't bother me in the slightest except that the buttons that fire the missiles stick out too far, and as a result you cannot position the arms directly at the sides. You have to either have them slightly outstretched, jeopardizing the balance of the toy, or swivel them all the way around to the back and position them behind the buttons. This is what I've chosen to do since it looks better this way, but if you wanted to put it in a lineup with other jumbos all standing in a neutral position, Super Worrior would stick out. 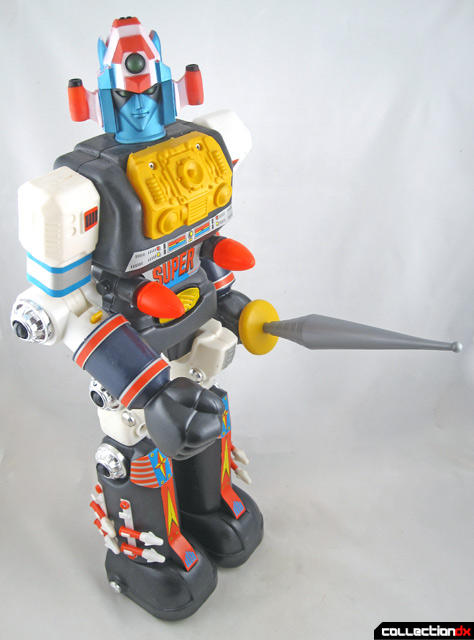 Moving further down the body, this guy has Battle Fever's legs. Two large white wheels have been added to the bottom of the feet.

In addition to parts flagrantly stolen from other toys, you may also detect nods to both Gaiking and Danguard Ace in the designs on the leg stickers. 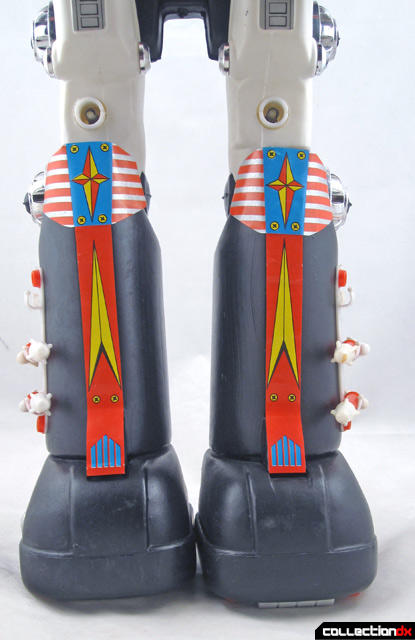 I bought my first Super Worrior probably more than 10 years ago when I was still living in Atlanta and in my early days of jumbo collecting. Upon receiving it, I eagerly emptied the contents of the box onto the floor of my toy room and literally within seconds, it was broken.

Those of you familiar with me know that I do not actually play with my toys so it was not a matter of being too rough with it. Being a "robot factory" style bootleg jumbo in the same vein as Space Valour, I was merely trying to put the pieces together when the connector on the arm snapped off, leaving the circular piece that was originally connected to the upper arm lodged into the slot of the lower arm. I had to glue it back on and never touch it again. It would re-break several times over the years regardless. 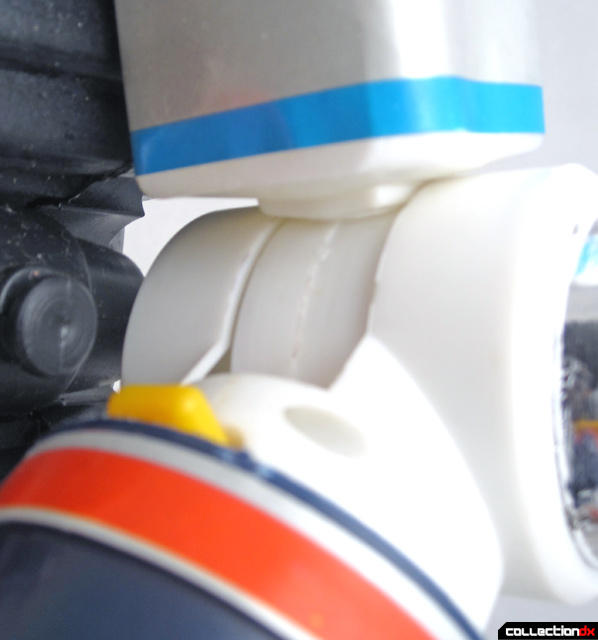 I would love to chock this up to a random occurrence, but the exact same thing happened years later when I broke down and decided to get a second specimen. It's unusual since this toy shares these parts with Space Valour so I'm not sure why I've had such poor luck with this toy and not that one. This one flaw, however, is not the only problem with this jumbo. 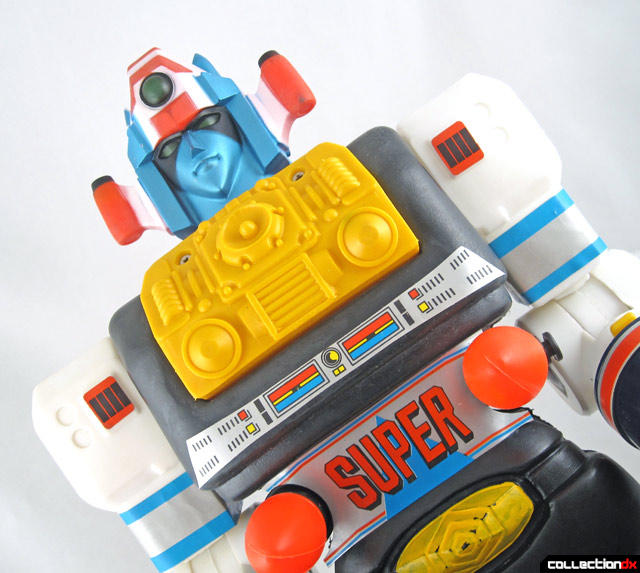 Because the toy tries to combine parts from toys that were not originally intended to go together, not only does it have an ugly look to it, but not everything fits the way it should. The toy can be unstable at times and fall over, resulting in more breakage. The missile clips on the legs in particular are an area of concern. Several of them broke on my first one, and although I've been lucky so far on the second, you can be sure that I treat it with the utmost care. In fact, I refuse to even arm the upper most missiles clips because they are placed so close to the screw that holds the entire rack in that I am afraid that bending the clip at all will snap it. Now to be fair, this is the same setup as on other toys like this, but at least those ones have the spinning discs that can be more easily and safely stored there. This one does not have that feature so it's not possible. 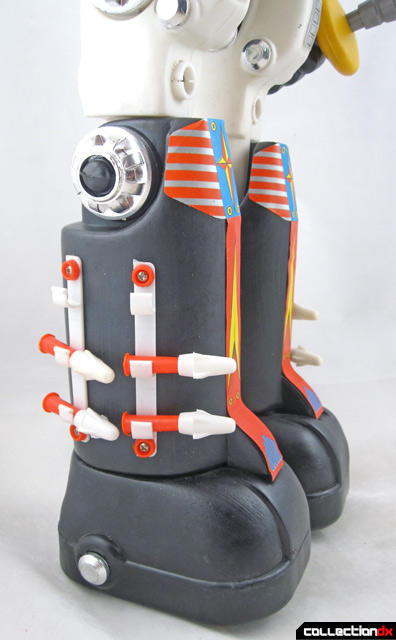 So, you might be wondering what redeeming qualities this entry in the world of bootleg jumbos has and what possessed me to give it a second chance? Well, it IS a jumbo, and it DOES say "SUPER" right across the waist, as if proclaiming its "superness" is enough to convince its foes not to mess with it. On the other hand, maybe the makers just weren't prepared to attempt to spell "WARRIOR" again. Though to be fair, they did manage to get it right on the diecast version 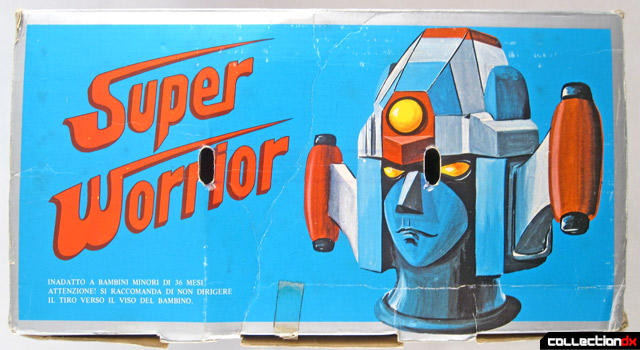 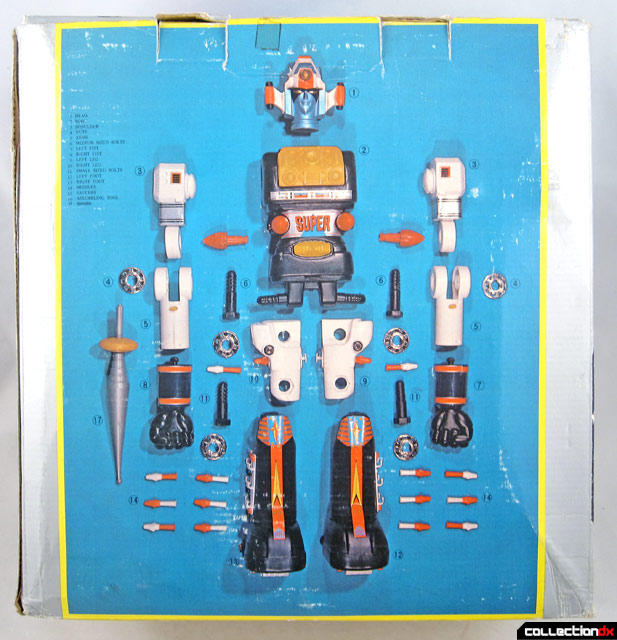 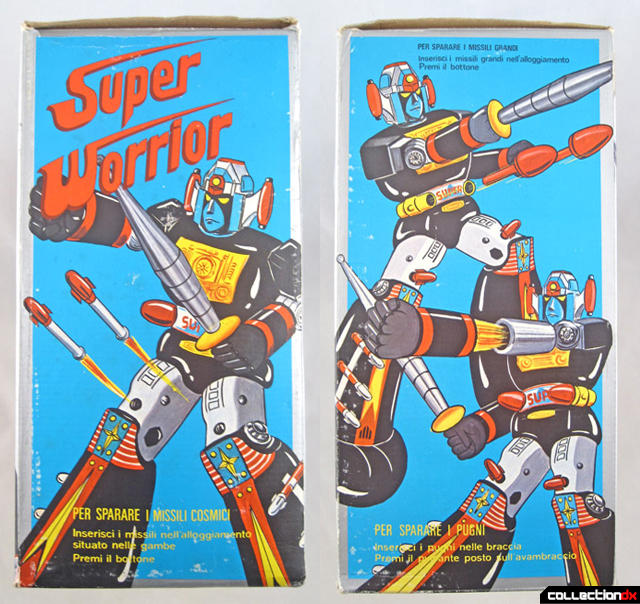 6 comments posted
Do my eyes deceive me? Has he

Do my eyes deceive me? Has he arisen? NEKRODAVE HAS RETURNED! All hail!

Lovin' the package art and especially the photo
of the robot's exploded view. Wonderful!

Welcome back to CDX ! Great review!

I have such sights to show you.

Dave is back! Let the cool zaniness begin anew.