Does anybody remember this blog post I wrote a few years ago? Feel free to take a second to refresh your memory now if you don't.

Okay, ready now? Then let's get everyone back up to speed regarding this elusive and now somewhat famous, or infamous depending on your perspective, toy. Since I wrote that article, several examples of this toy have been found. The first, fittingly enough, was discovered by my friend Juan Carlos (he of the excellent Figurasdeaccion blog). If I remember correctly, his example actually differed even further from the ones shown in my blog post here. His actually had a head that was cast in white vinyl rather than gray. So some had white heads, some had gray. Some had red eyes and horns, some had yellow. It always amazes me when we discover toys that seem to be ridiculously rare, yet still are found with variations, suggesting multiple production runs. Where did all these toys go? Well, eventually one of them would end up at my house!

I was fortunate enough to acquire a specimen for myself, but I would need some help again. Remember my friend who acquired the Famos Daimos for me? Well, he would come through again in a big way this time around, as he handled the communication with the seller, paid for it out of his own pocket, and picked it up in person for me before shipping it once again to Sanjeev's work where it would arrive safely in my possession. Once again he did all of this even though he still needed the toy for his own collection! 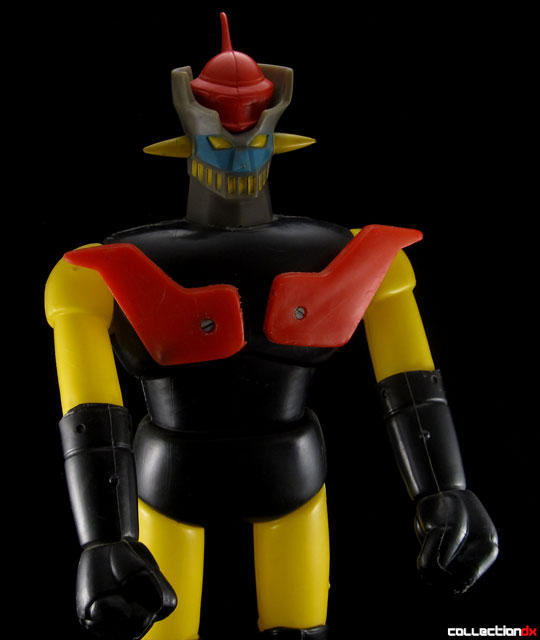 At this point, my recollection of the sequence of events gets a little hazy, but suffice to say, more specimens would appear, including ones that still had their original blow molded Hover Pilder. It was made after all! It made sense that it would have, but until you see it with your own eyes, you just can't be sure, especially with bootleg toys. (Unfortunately, we've yet to see any original packaging so that's still a mystery.) Fortunately, as was the case with the Daimos, my friend's selflessness would result in some well deserved toy karma as not only was he able to procure one of these guys for himself, he even found an extra to sell. And here's where the toy would be elevated from obscure curiosity known only to and cared about by a small group of dedicated collectors to the talk of the Japanese toy community as a whole. Much to the surprise of everyone, the toy sold for in excess of $5,000! The clamor the auction result created was nearly as surprising as the result itself!. Many people felt it was a completely insane price for a toy that they deemed to be ugly and irrelevant. Some even went so far as to disparage the toy and suggest the auction was not on the up and up. (Knowing the seller as I did, I was quick to dispel this notion.) Others defended it as a rare piece needed by hardcore Mazinger Z and Jumbo Machinder collectors that was widely available for the first time. 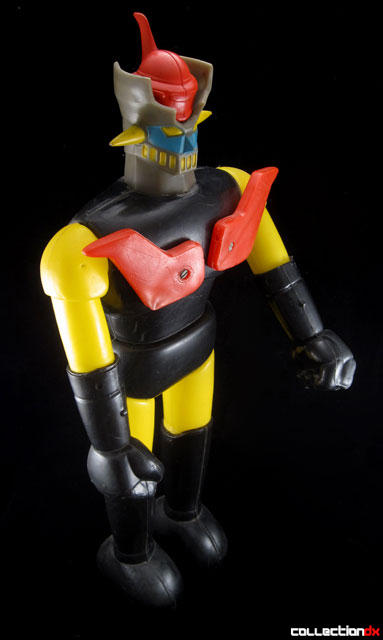 Okay, so enough of my story telling. Here's a few points of interest about the actual toy that I didn't know until I actually held one in my hands. It was always assumed that this toy was based on the very rare Spanish "Nails" Mazinger Z jumbo from B.R.B. Merchandising, and it appears that you can actually still see remnants of that toy in the mold of this one. In the following pics, you can see a hole in one of the shoulders. Initially I had assumed it was just left over from the blow molding process but that same arm also has a strange protrusion that is located where the rod from the Spanish toy would have been. 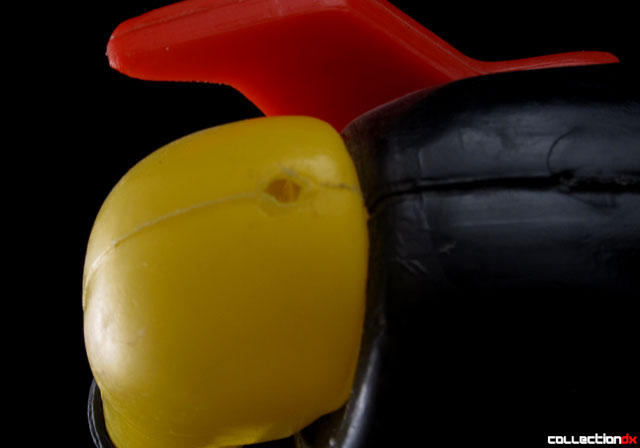 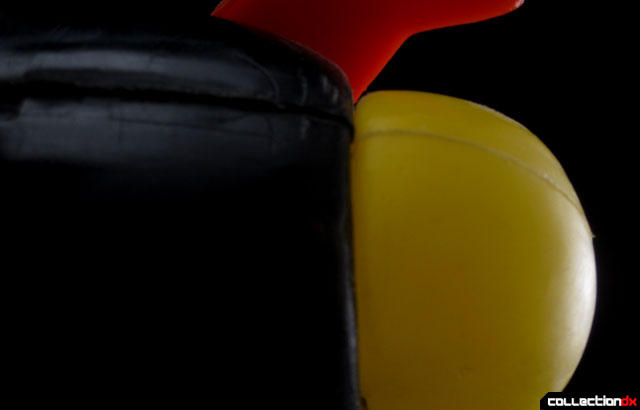 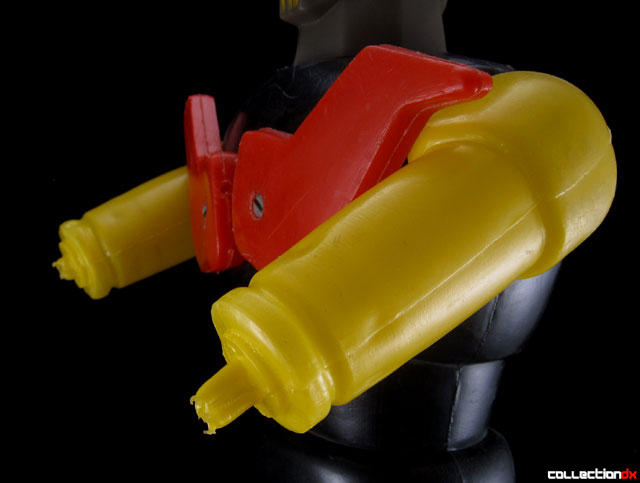 OK, just two more points before I wrap this up. First, although my example does exhibit tiny holes in the feet where a rod that held wheels might have gone, so far I don't think we've seen one that actually still has it's wheels intact. Like the Hover Pilder, I'm sure they're just missing for some reason and the toy likely included them originally. Second, although the original Hover Pilder was a pink-ish colored blow molded piece, the one you are seeing in these pics is actually a resin re-cast that my friend made for me and sent to me as a gift. Now, I've been pretty outspoken in my utter disdain for reproduction parts but I also didn't want to offend him by not accepting his gift. Therefore, I decided to take a marker to it and clearly label it as a repro, both on the back and on the bottom. This way it'll still display well on my shelf but will never be mistaken for an original. 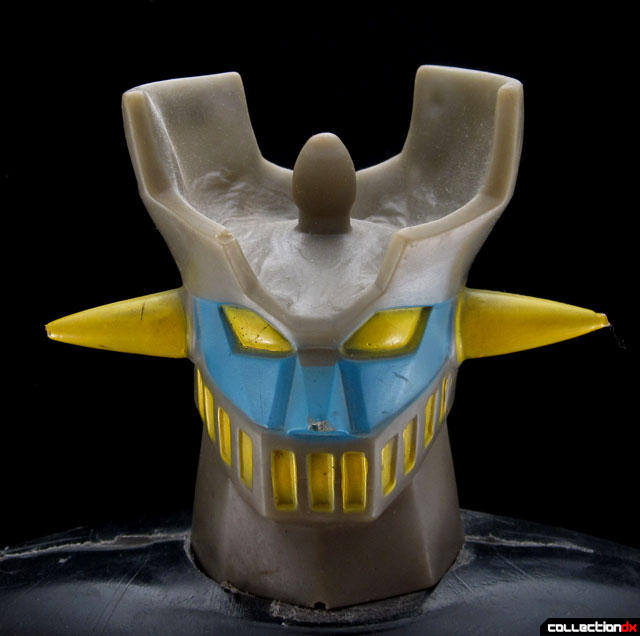 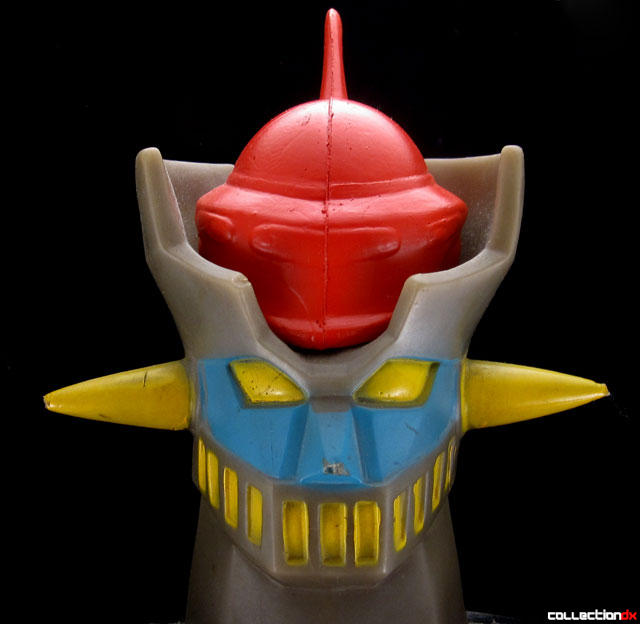 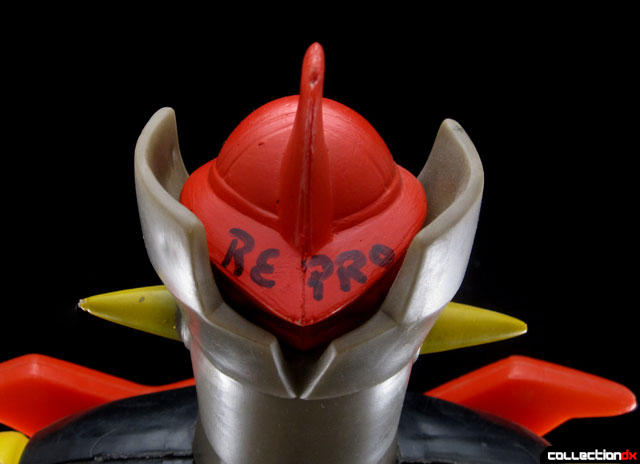 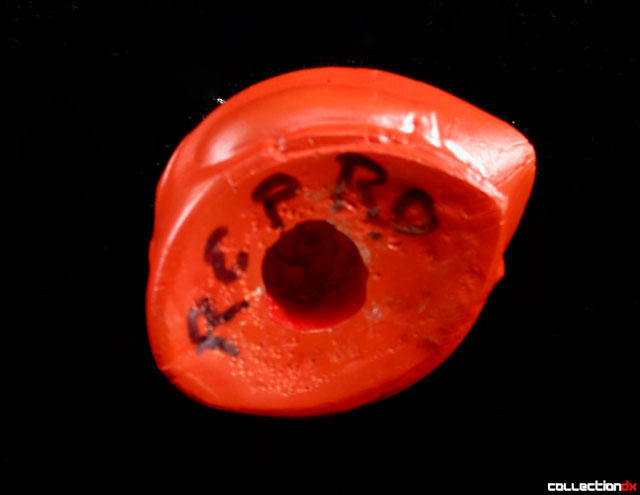 Nice review my friend!! In fact, checking few weeks ago, I'm almost sure that this model is based on spanish color books called "Pintando a Mazinger Z" (painting Mazinger Z) in the 80's, and probably, this was a guide to produce the toy and sell them in Venezuela.

This is a wonderful article on a real oddity and the backstory is amazing. Thanks for putting this together and sharing Dave!