When I saw that a new Bludgeon figure was coming out for Transformers RID 2015, I was and still am very excited about it! But, before that figure comes out, in eager anticipation I decided to get the obligatory mileage-getting repaint with the inspiring and endearing, great title of "Blastwave" (Hasbro's two favorite suffixes when they can't retrieve a name copyright put together!) and although I basically have this to satiate my desire for a Bludgeon, I've found it's actually pretty good!

Vehicle mode is a green and blue tank, more specifically a reverse engineered and very heavy remold of RID 2015 Megatronus. The design is actually pretty interesting! It's not a traditional "H-tank" but the base is literally shaped like an H instead of the two treads being split into four. The turret is comprised of mostly original parts, and is double barreled with a very long back section that looks so much different than Megatronus's turret. One cool thing about it, is that the gun can be removed and replaced with any other 5 mm port accessory. Honestly I couldn't say which one looks "better" in this mode, but I will say the green and blue color scheme wasn't my favorite at first, but it really grew on me while taking the pictures for this review. Overall, Blastwave does have a really good tank mode. 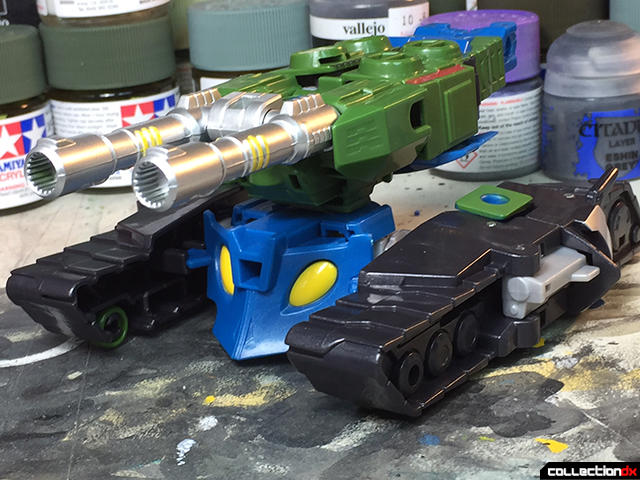 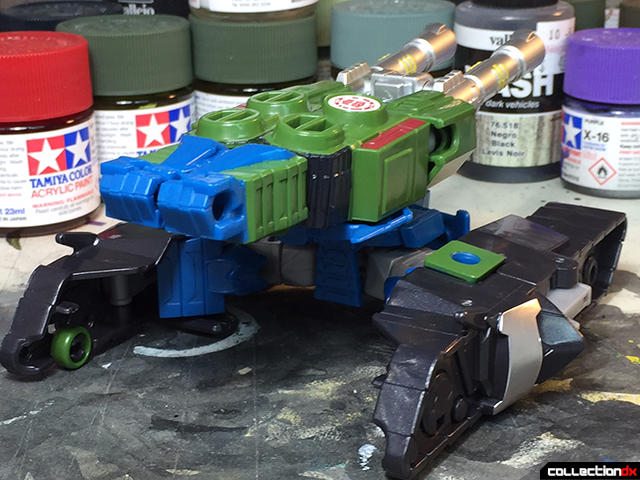 Transformation is simple but interesting and fun nonetheless. The tank treads disconnect from the back and hinge over to cover the treads in the front, from there the treads disconnect from the front plow forming the legs. If you want to, the double barrel can be removed for use as a gun or just folded down for storage. Next the back section of the turret splits in half forming the arms, and finally, the head just flips up from the body, while the conversion is finished off with a dynamic skull chest plate reveal.

The robot mode itself looks pretty good, but definitely not a Blastwave and more of a shattered glass Bludgeon. Despite that, I think the color scheme fits this mold pretty well! It looks pretty dynamic, and actually has a good amount of paint when compared to other RID 2015 figures. The skull chest plate is cool and all, but maybe a little too evil looking for an Autobot. Articulation is pretty good with the only standout being a waist joint like most RID 2015 and most classics (CHUG, etc) figures. This really helps with sword poses! 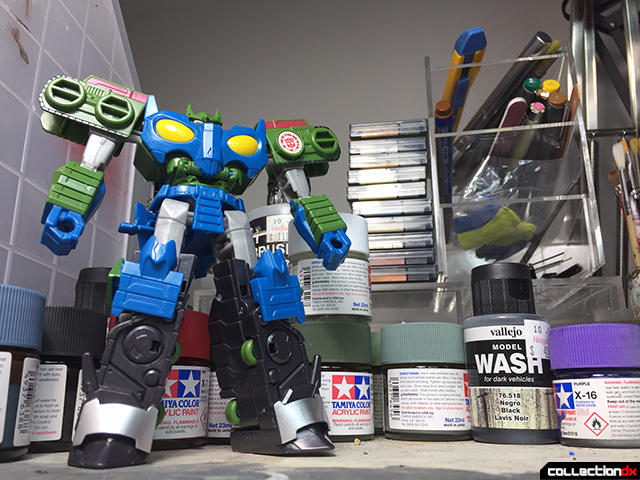 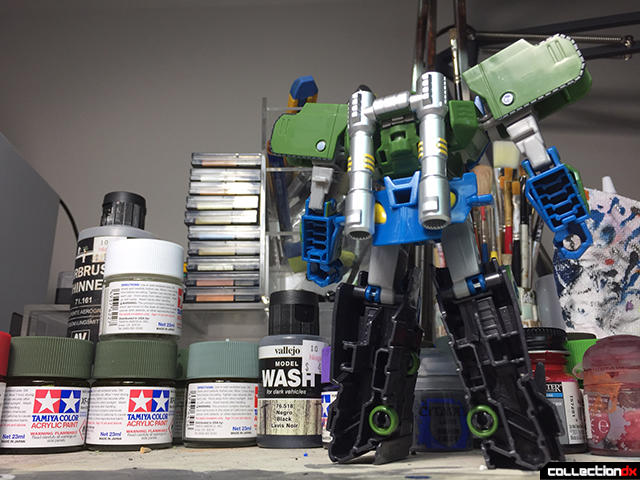 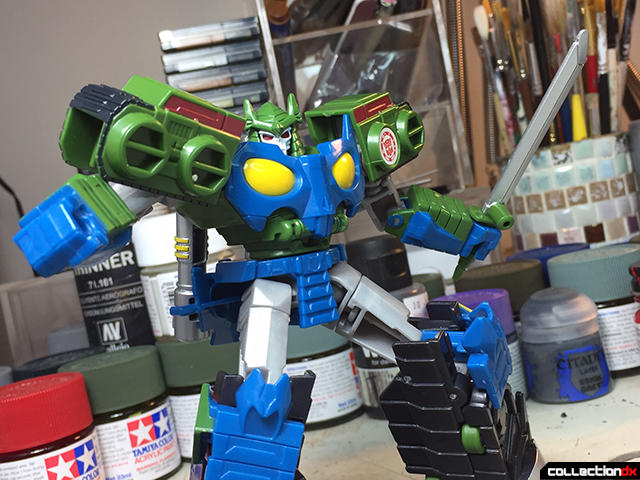 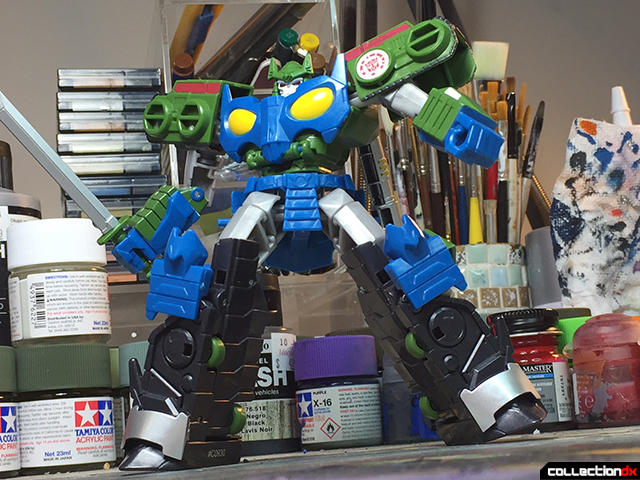 Speaking of which, Blastwave's accessories are few, but fun and versatile nonetheless. First is a katana, a weapon akin to Bludgeon that features a pretty clean silver blade. The tank mode's double barrel also makes for a nice gun for Blastwave, and it can even be mounted on the back of his head to act as shoulder cannons. These weapons actually make Blastwave a really fun figure to pose. 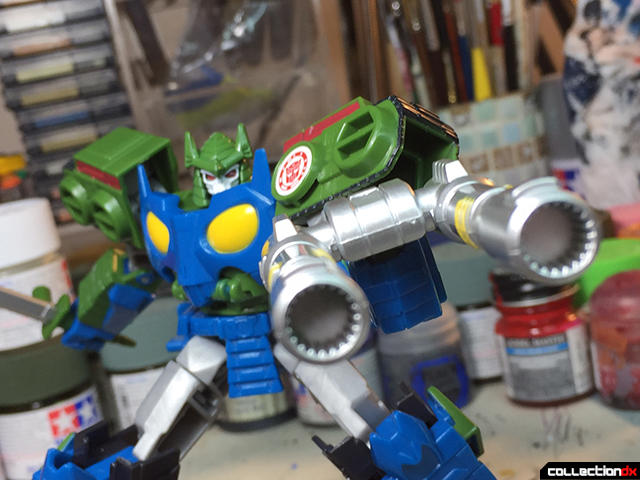 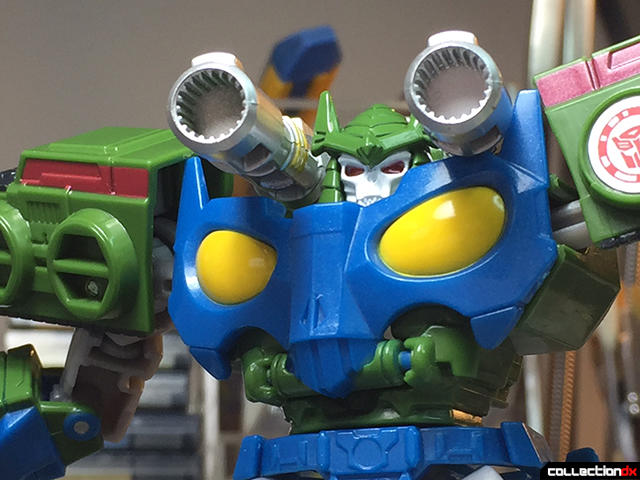 Size is fine I guess, as he stands just a bit shorter than Drift. 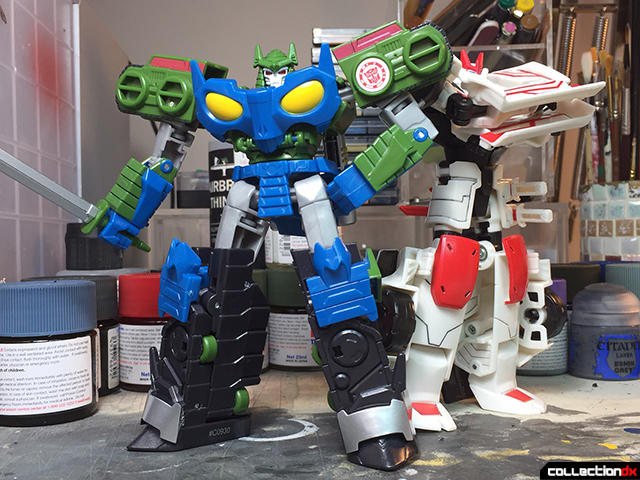 Taking everything into account, Blastwave has a good transformation, really good paint for RID 2015, decent poseability, and some fun accessories that make him a good Transformer, and an even better Bludgeon.

Since bludgeon hasn't really come out in America yet, what do you guys think about blastwave?

He's definitely one of the better looking RID figures, and despite the hollow legs & arms, looks more complete than most of his peers. I think he'd be better served looking like his on-screen version instead of a Bludgeon repaint, but so be it.

Yeah good point, he doesn't really make an attempt to look like his show model!