As the third wave of Combiner Wars is in full swing, so are the repaints and remolds. Following behind my look at Protectobot Rook is the team's singular airborne member: Blades. 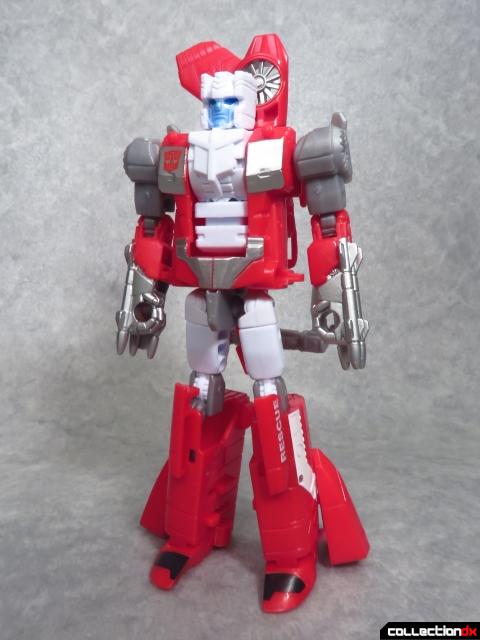 So here is the rescue helicopter with the heart of a street fighter, in all his crimson glory. What separates Blades from the previously released Alpha Bravo is a new head and the fact that he's red. 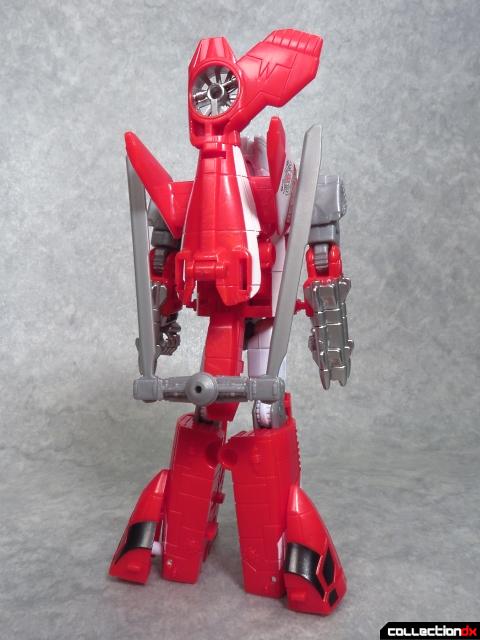 While Blades's coloring is fairly faithful, the Combiner Wars toy lacks the white midsection of the original G1 version. No doubt the Japanese Unite Warriors release will attempt to correct this. I wouldn't say the US release is bad, just a bit too plain. 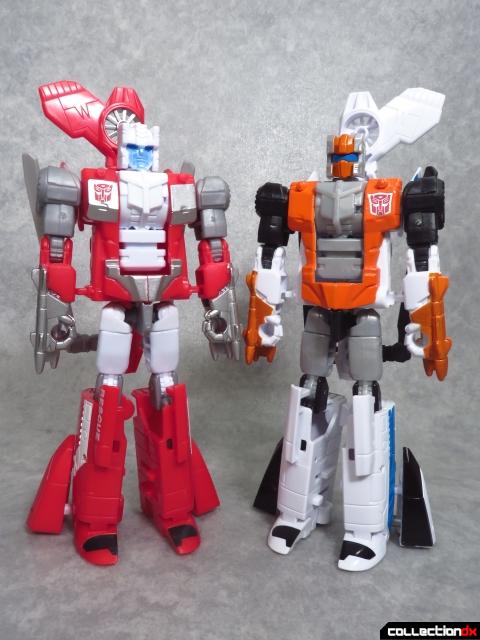 Here's the Protectobot alongside his mold mate, Alpha Bravo. Despite being the second use of this toy, Blades feels just as tight and solid as the Aerialbot newcomer. 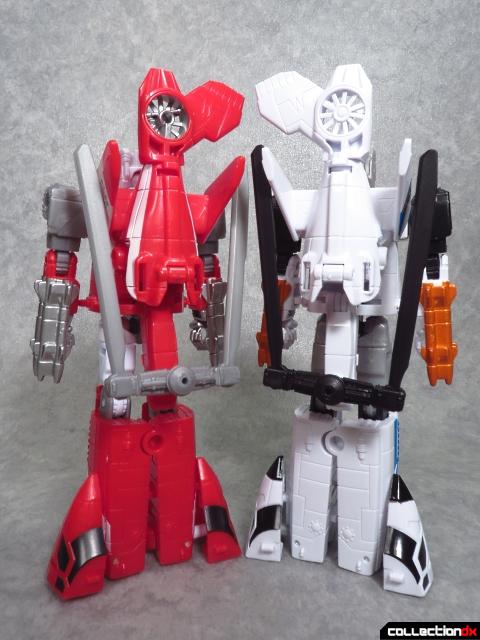 It's such a solid figure, that I'm pretty okay with owning it twice. 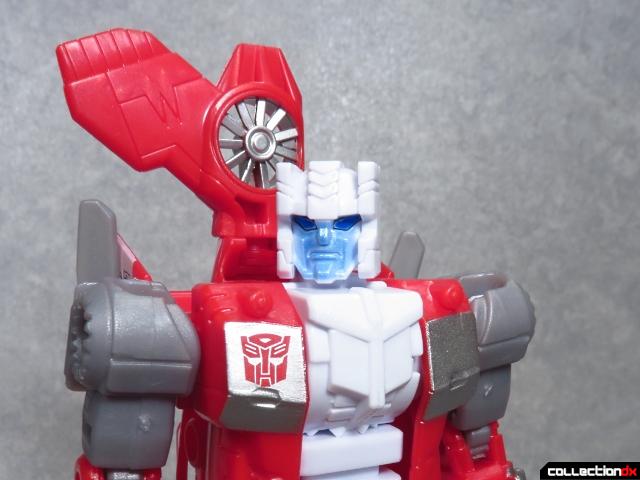 The new head is the real draw for this version, with the "friendly" Autobot sporting a nasty scowl. Blades was always described as a bot who'd rather be beating up Decepticons with his bare hands than flying above them, and the toy gets that across perfectly. 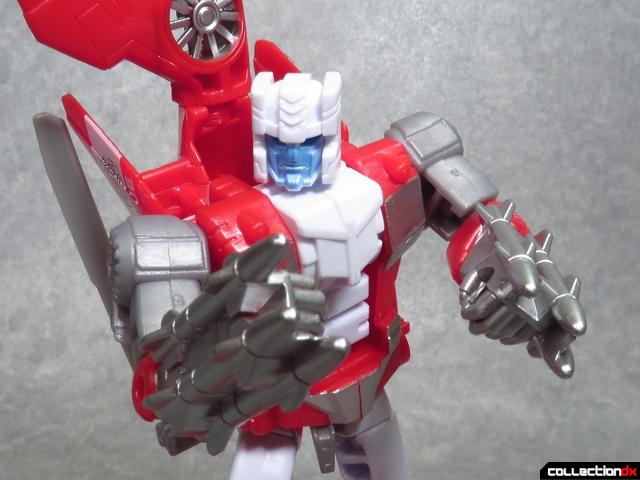 One thing I am a bit ambivalent to is the fact that Blades kept the missile-bearing forearms from Alpha Bravo. It just seems at odds with the whole rescue helicopter motif, and would only require two new parts to seem less silly. 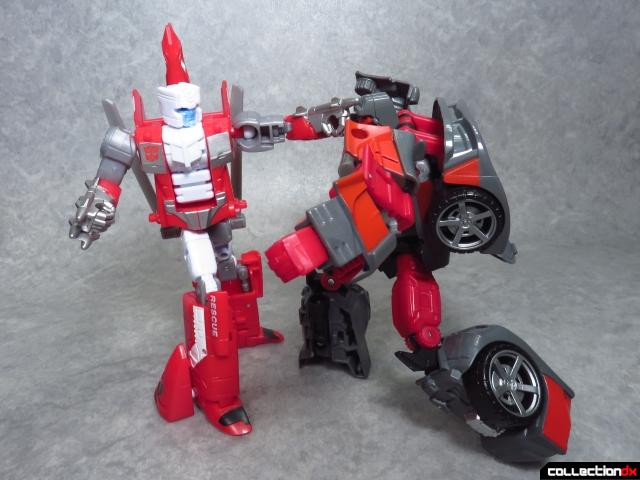 I'll just pretend they're false warheads that are actually a set of pointy knuckle dusters. 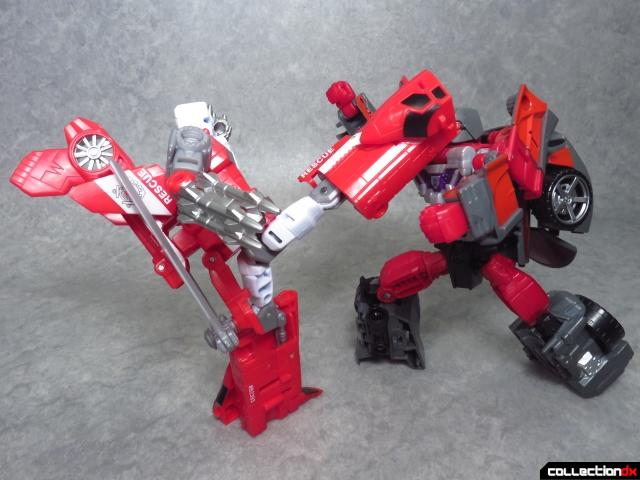 Being nearly identical to Alpha Bravo means he's just as ready to kick some Deceptibums (in the face). 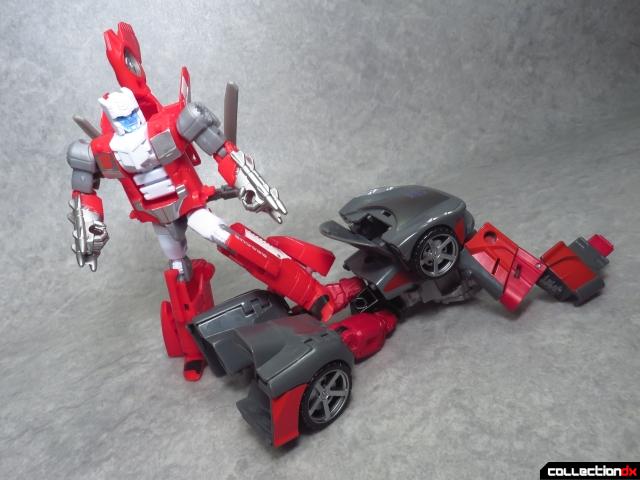 "Feh! These guys ain't exactly putting up a fight!" 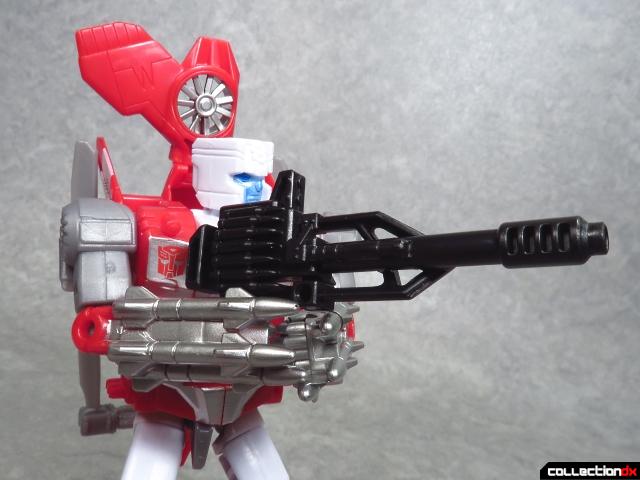 Blades's handheld machine gun is identical to Alpha Bravo's. With this kind of firepower, he looks like he stepped right out of the G2 comics. 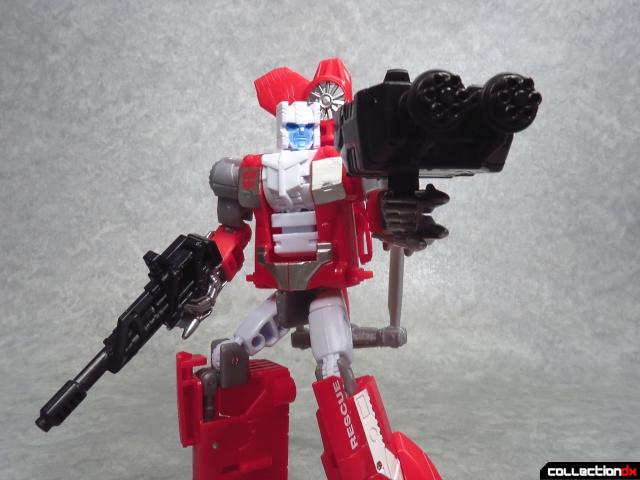 The double gatling gun-equipped combiner accessory is nearly unchanged, the only difference being that the thumb joint on Blades's is now white instead of gray. 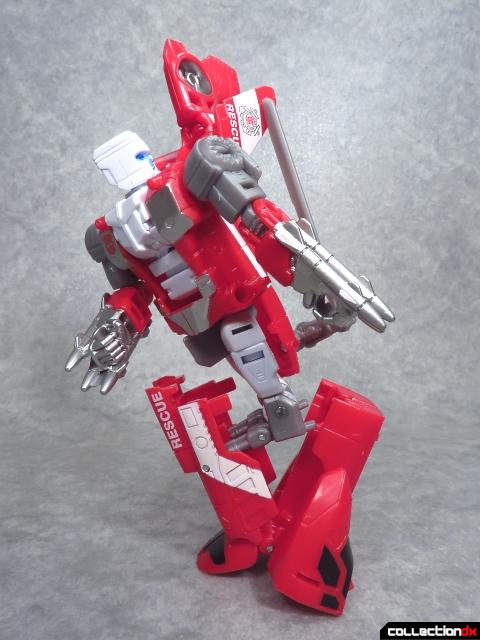 As expected, Blades transforms identically to Alpha Bravo. And as far as I can tell, this being the second use of the mold has not caused any issues as the Protectobot is just as tight (if not tighter) in all the right places. Even prying his legs back apart after clicking them together takes a fair bit of effort. 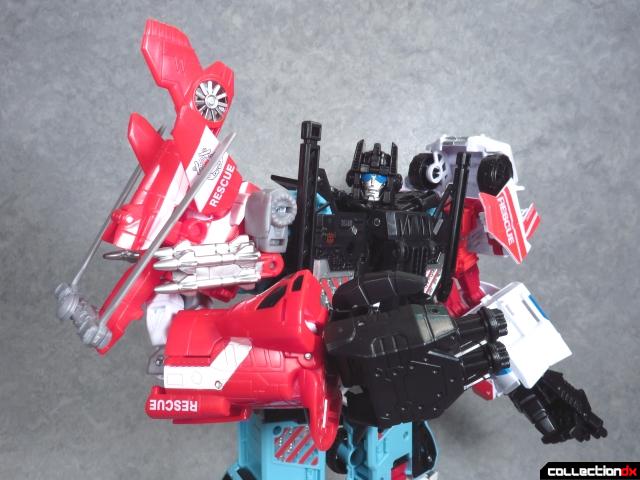 Blades's arm mode is nice and solid, while also being very red. 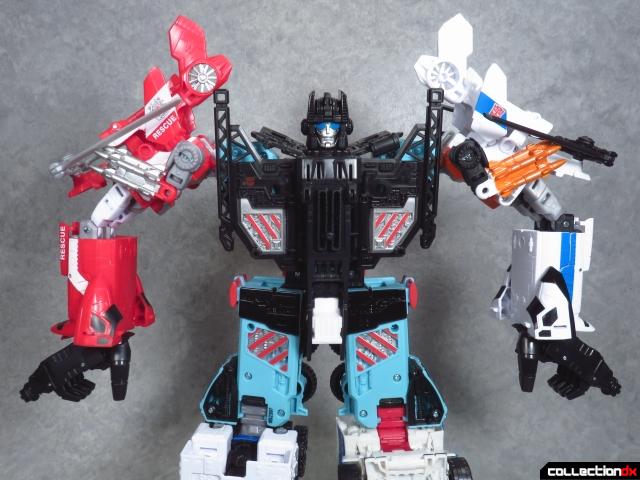 And here's a shot of the two helicopters as arms to please the readers out there who are really into symmetry. 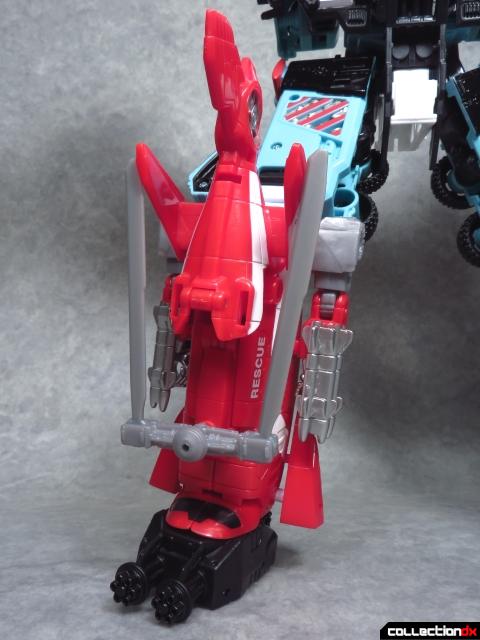 Now for a very red leg. Again, Blades performs his limb duties like a true professional. 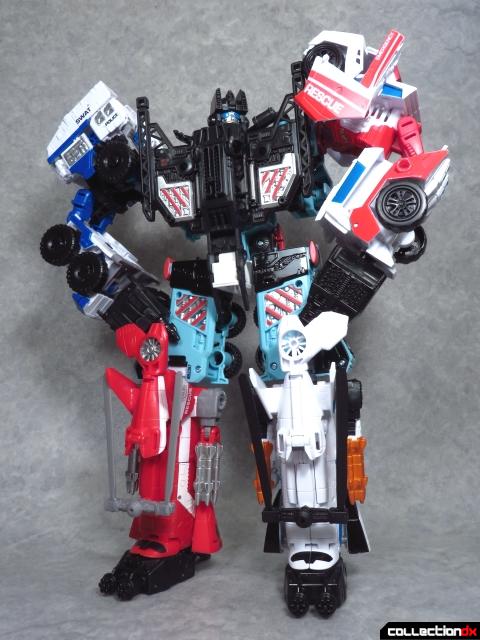 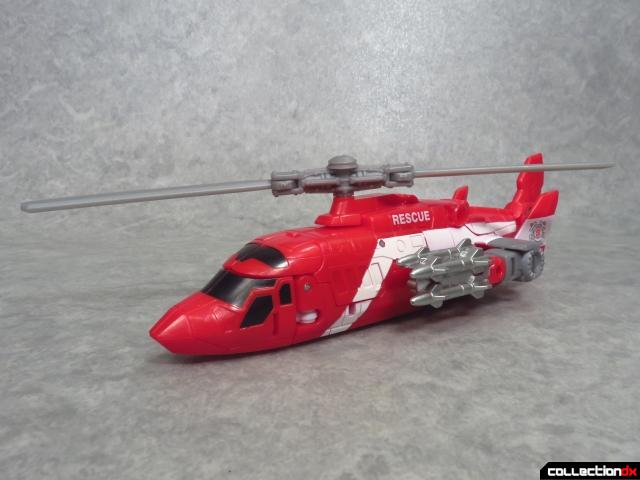 Full-on vehicle mode is where Hasbro's paint app minimalism is most visible. Again, he looks fine, but a mostly red chopper with a small white line on either side feels a bit too ordinary. In fact, googling "red helicopter" will return a bunch of images of real life aircraft with almost this exact deco. 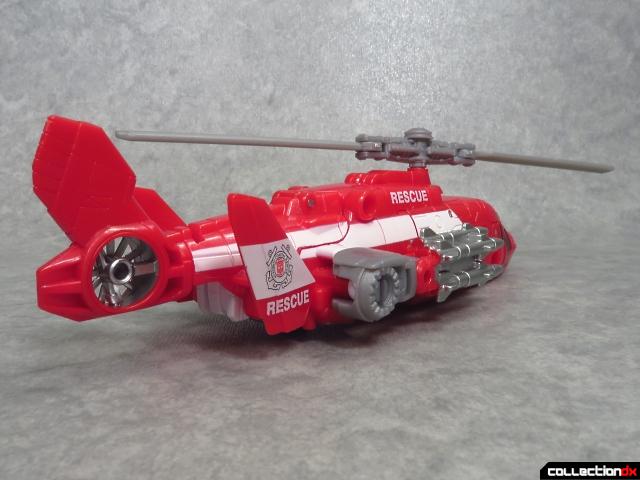 All that being said, I do appreciate that, unlike Alpha Bravo, Blades has a colored in tail rotor. 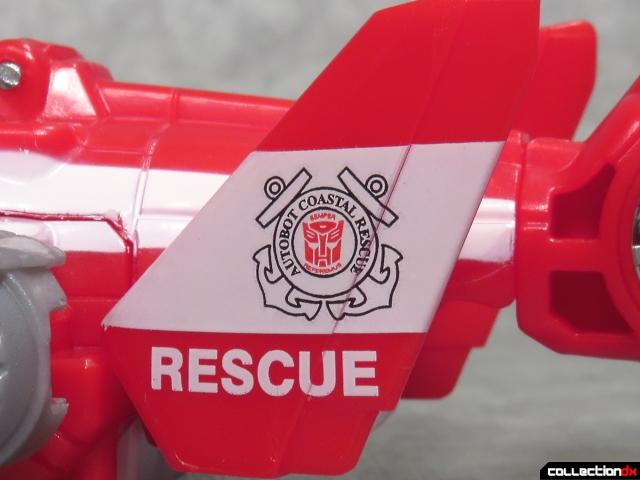 He also has a neat tampographed emblem showing that Blades is a part of Autobot Coastal Rescue. The Latin phrase "semper referemus" written underneath roughly means, "We'll always bring them back." 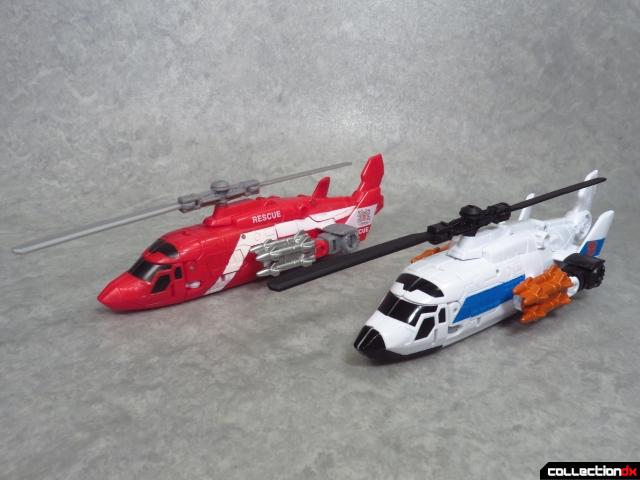 And here's the two Autobots in helicopter mode. 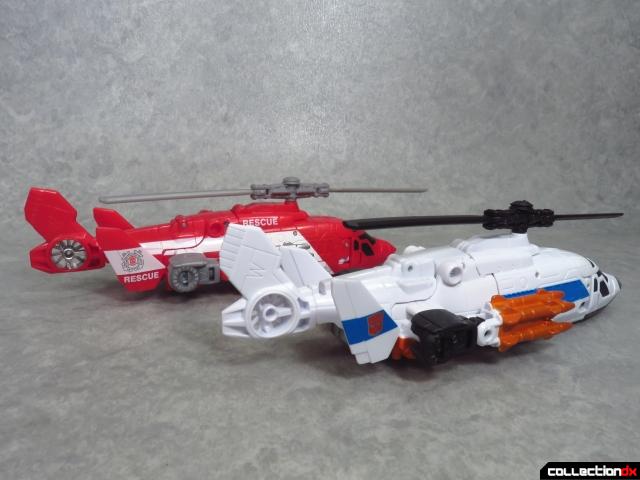 At this point the choice between them is all up to aesthetic preference. 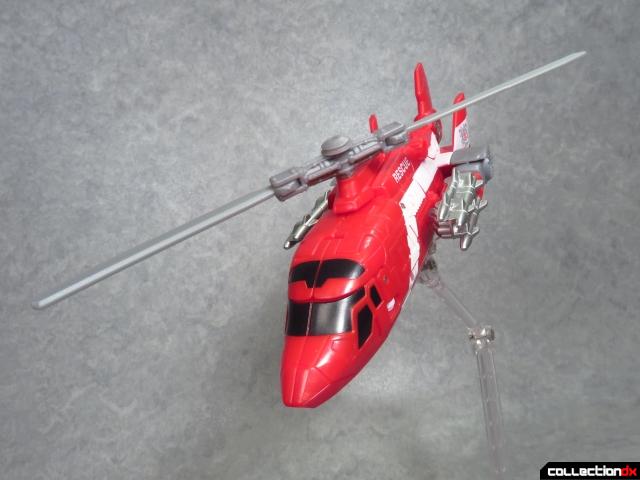 As much as I rag on Blades's color scheme, he is still one sweet looking chopper. So sleek and fast, like he's ready to save people in between knocking the optics out of a Decepticon's face. 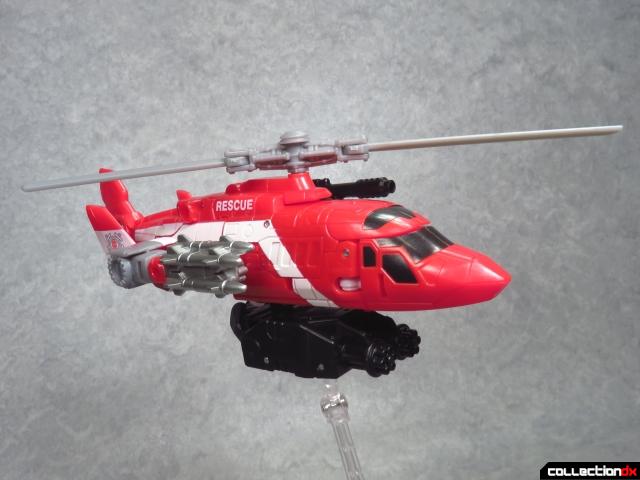 Although he's not fooling anyone while carrying all those rapid-fire lead spewers. 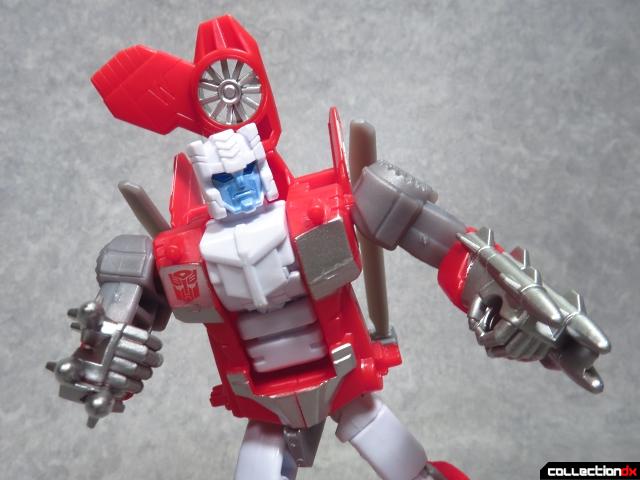 Combiner Wars Blades is exactly what I expected him to be. Among the team, he is the only one who isn't a heavy remold or an entirely new figure, and he feels a bit plain as a result. On the flip side, Blades is a repaint of an already great figure, so he has all the strengths of Alpha Bravo while serving a purpose on the Protectobot team.