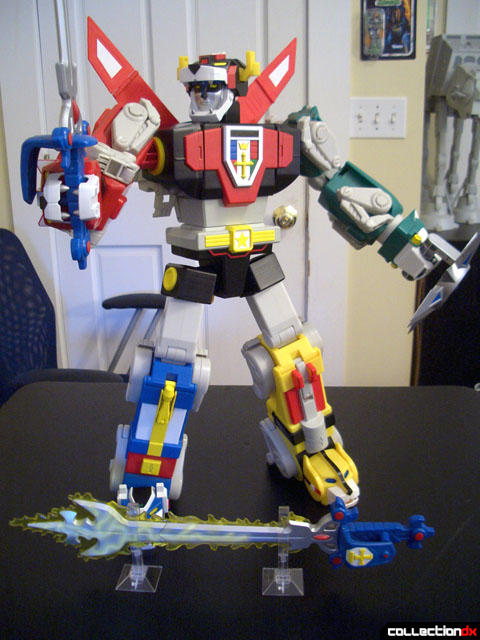 What a long, strange trip this has been.

After no small amount of drama my Black lion arrived. I first woke up to what I thought should have been a shipping notice only to be told that Matty Collector was cancelling my order... WTF? Three phone calls and two days later it turns out that when there was a billing error and that, instead of notifying me there was a problem. they canceled the order and didn't notify me until they day I was supposed to see it ship. Well we eventually got it sorted and it finally shipped out. 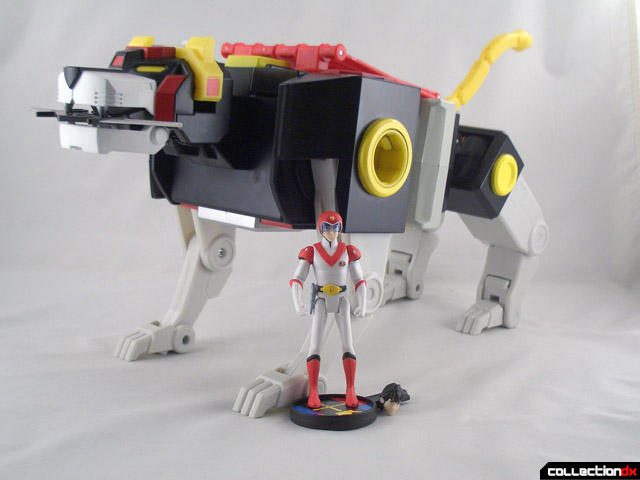 At this point I've pretty much had it. I'm not expecting the Black Lion to wow me and am just looking forward to getting the reviews over with and moving on. Then the package arrived... 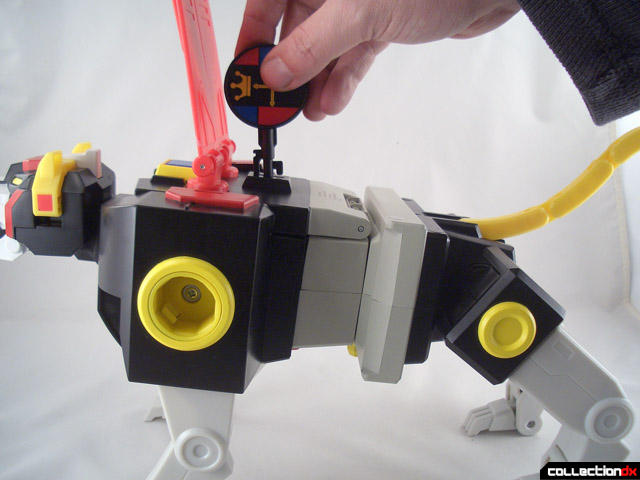 I found myself more impressed than I was expecting. The lion is HEAVY and well made. I have a few very minor paint scuffs, but all the joints are tight and clicky. 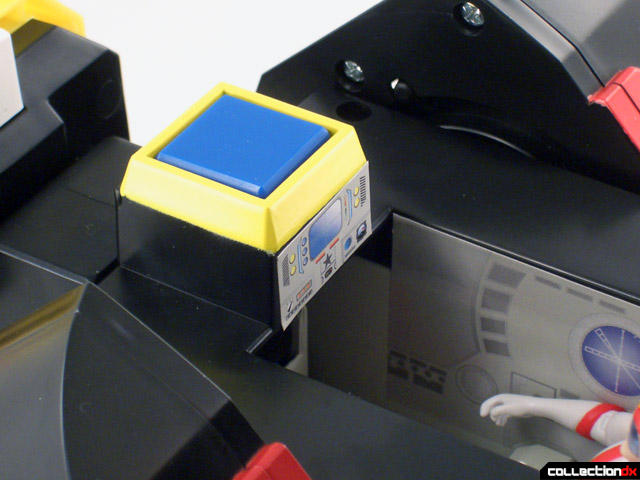 The cockpit has all its stickers on straight. 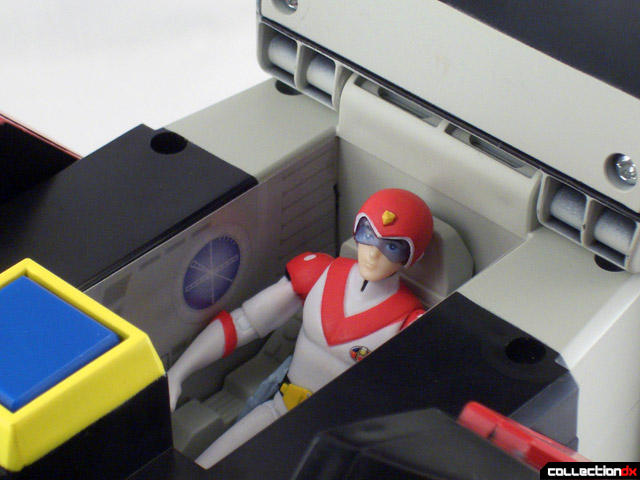 Even the paint applications on the pilot figure are better than previous figures. His helmet, however, is glued onto his head crooked. So that makes five for five as far as pilot figures with issues. 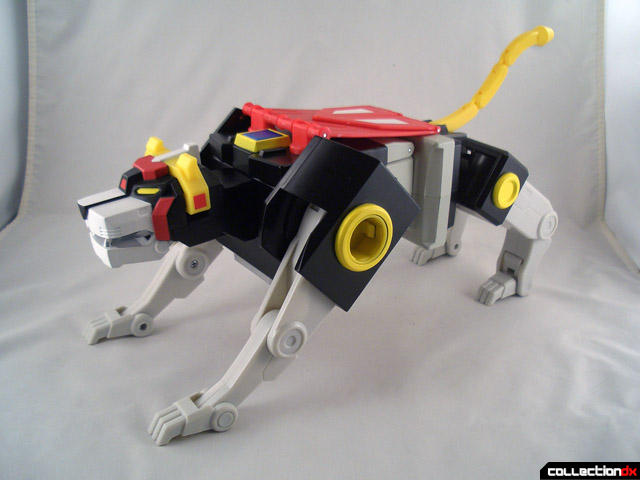 The Black Lion features fairly generous articulation. The spring loaded limbs don't really get in t,he way this time around. 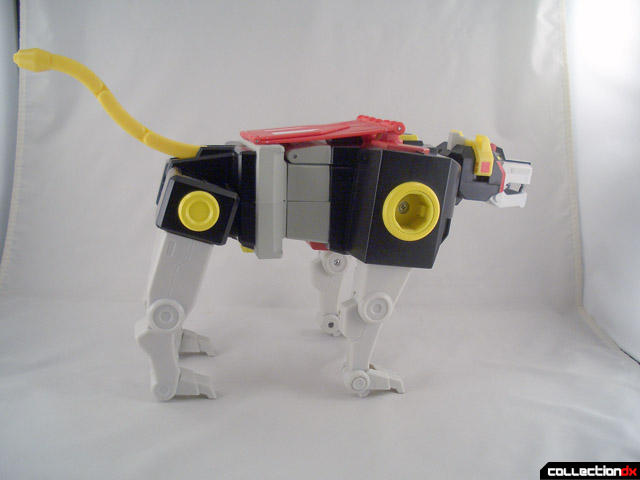 With that said, the Black Lion is still a bit of a brick. There is no getting around that really. Forming the torso of a giant robot will do that to you. 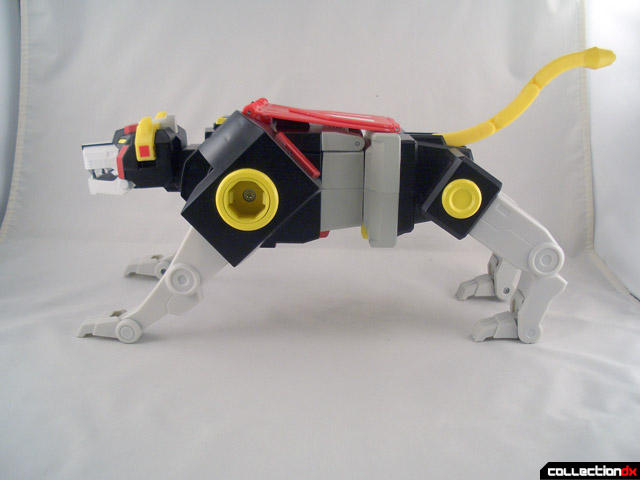 Despite that he doesn't look bad. 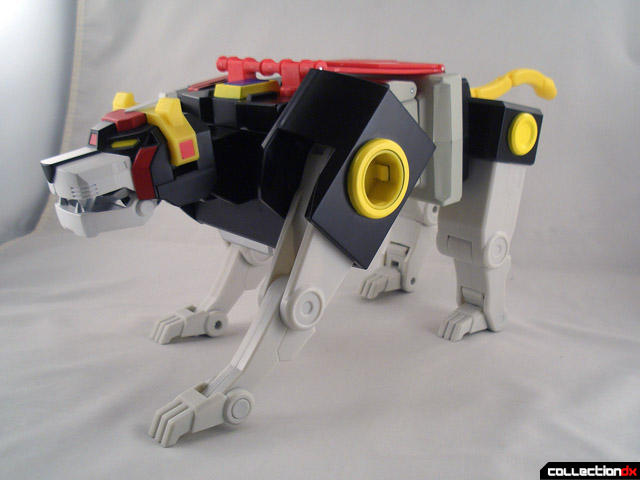 Transformation on the Black Lion is pretty straight forward, but there are some differences from previous releases. 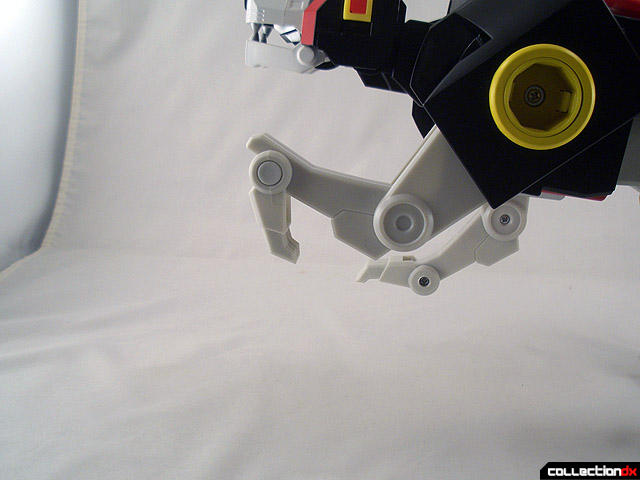 First things firs,t though. The ratchet joints in my front paws have pretty much crapped out already. 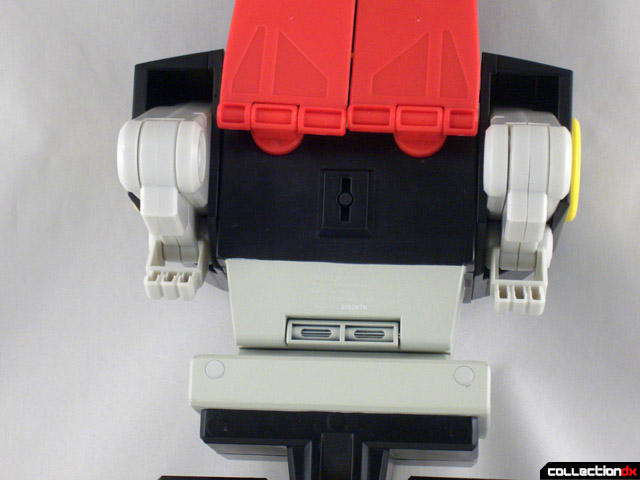 When I first started playing with this guy they would sit flush with the leg when folded up. As they day went on, however, they started to spring a bit back out. In the scheme of things it's not a big deal but it does make me worry that other joints will fail over time. 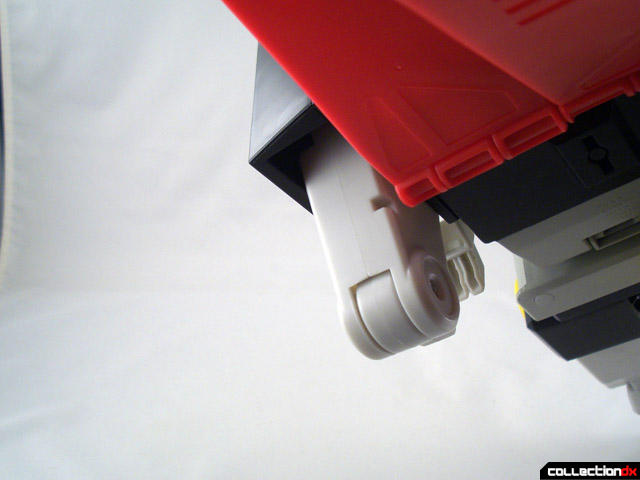 I called customer service and was told they would get back to me. They where fairly rude once I explained I was calling about an exchange, barely spoke English, and whoever I was speaking with hung up on me. 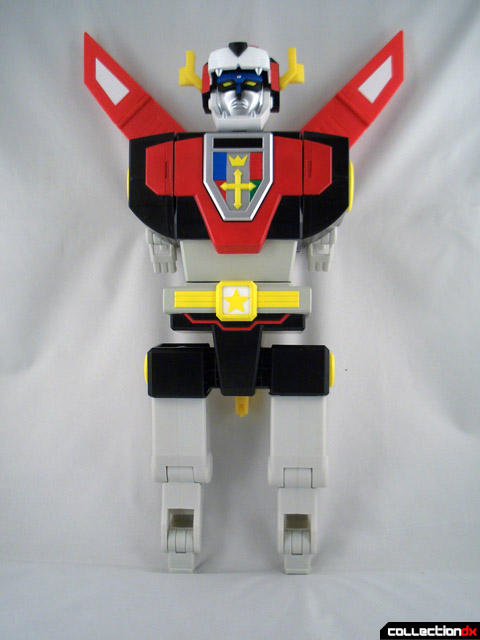 Anyway, back to the review. The feet on this release flip around, presenting tabs. 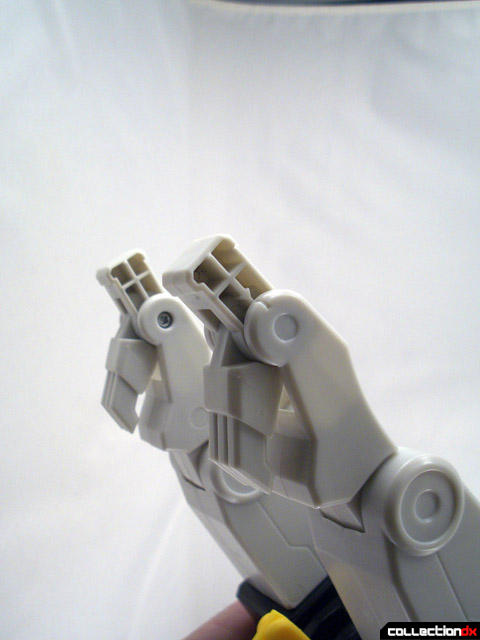 You make sure you line up the arrow to the line on the side and you are ready to form Voltron. 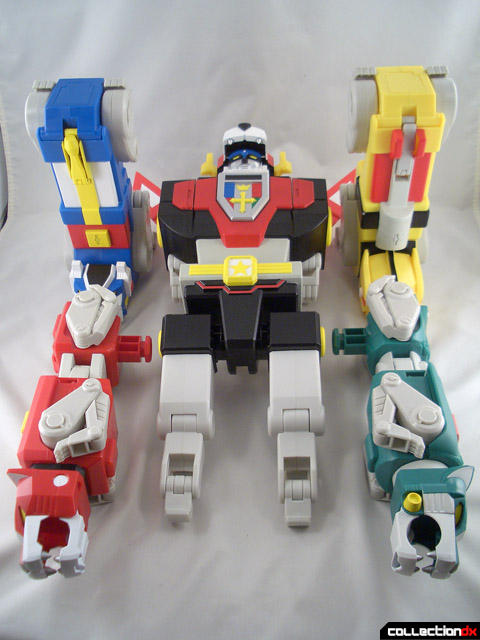 The arms fit in well, and unless you're trying to take them off they stay put. 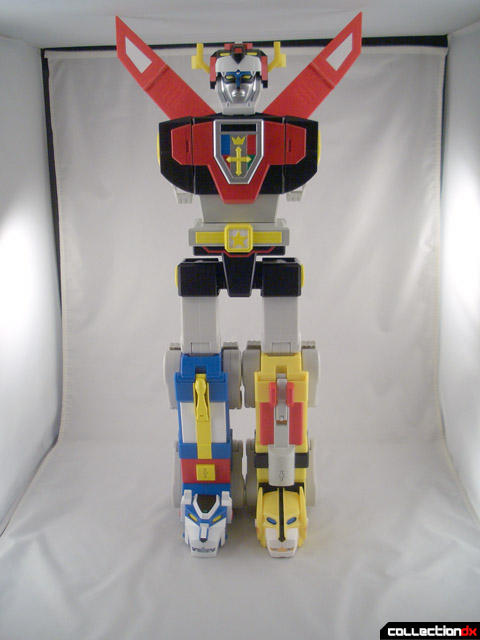 Same for the legs. They snap in, and unless you press the small button on the back of the legs to release them they aren't coming off. 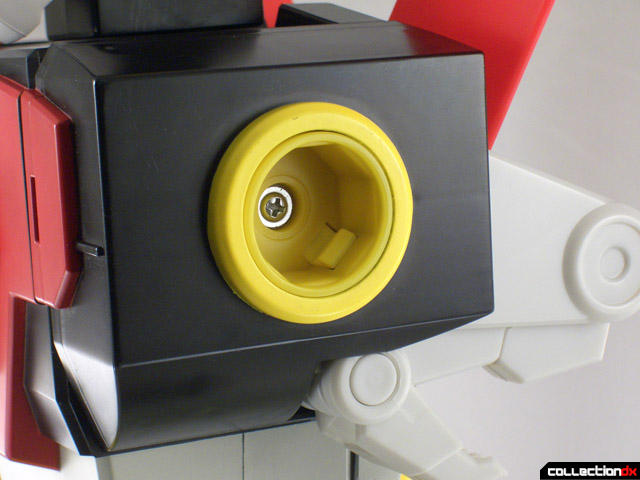 He is not without his issues. To fully appreciate the good and bad of the finished figure you really should watch the videos towards the top of the page. 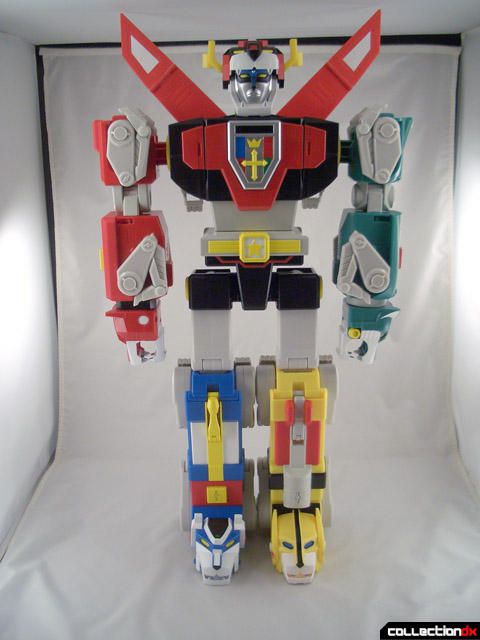 We already knew that the elbows on Voltron won't swivel and that really sucks because it would have given so much more in the way of posing. 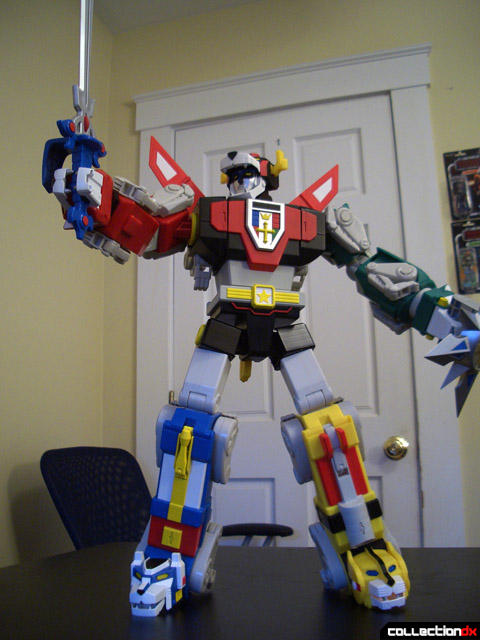 While we have some great rotation in the thighs and a hip joint, the knees only go back one ratchet. So again, you are limited with what you can do. 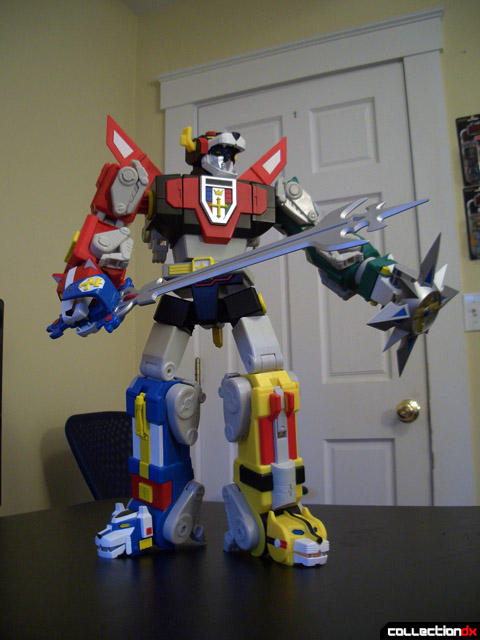 You CAN get some good poses out of it. It does stay together. My nephews will love it. 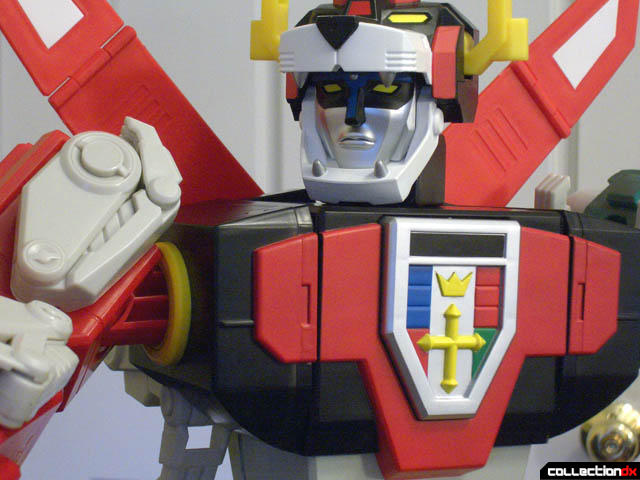 I for one am glad to be done with this and for all it's good I do not recommend you go out and seek this on the aftermarket for inflated prices. The whole line is riddled with quality control issues and was over priced to begin with.

Looking good, a Voltron with at least respectable articulation.

And a bit high priced than it should be.

I still prefer the old GoLion toys. Despite the limited articulation and age of that toy, it still has a charm none of the new toys appears to have.

So glad I have both the Toynami versions. Not often the Toynami product ends up being superior to the competition!

Thanks for the honest review.

... also a question on your end Adam since you physically have it in front of you and i don't.

By looking at the knee stubs on the black lion that tab into the leg lions, the shape of the front and back of the stubs look the same. Therefore if you twisted the thigh swivel so the black lions back paws are facing what would be the front of voltron if standing up, you could then peg the leg lions in as well.

What all this would accomplish is now the range of motion would be better for posing, since the original way in the review only allows his legs one ratchet click back and quite a few forward --- now with thigh swiveled 180 degrees so the black lions back paws face forward and leg lions in should allow one ratchet click FORWARD and QUITE A FEW RATCHET CLICKS BACKWARD.

And if this works the only tradeoff is having the black lions back paws in the front as kibble, but then again its not out of place since you see all the other lions paws anyways... just saying.

EDIT: It might actually not work since the black lions back paws look like they go in a lot deeper into the leg lions than I originally thought, but if Adam or anyone who has these could try and see if it works...

I'm sorry but I still prefer the Trendmasters one I reviewed over this. While the thighs are smaller, I don't like the big gap that it left between the top of the thighs and body.

Mattel should do the unavoidable ginourmously priced gitf-seft, just to fix all that QC issues.

Wow. As impressive as it looks, and as bold as the idea sounded. It really seems like this was one gigantic let down on the grand scheme of things.

I don't know, given the individual lion reviews, I don't think it was enough of a letdown. I was kind of hoping that when you put it all together one of the feet wouldn't fit so it couldn't stand up, or maybe the arms would spontaneously fall out. I'm pretty surprised that it works at all.

I know what it's like to feed the Matty beast, and I've been there when Mattel's favoritism for Masters of the Universe has shown through.

Back when Moss Man was being previewed, Mattel had applied the flocking material to his ears, to which fans immediately cried foul since it wasn't accurate to the vintage toy. Mattel went back and "fixed" the error, resulting in two versions of Moss Man--flocked and unflocked ears--being made available. This was over the course of a few months, mind you.

The DC Universe crowd immediately pitched a fit. There had been several times when they'd brought up similar errors in paint apps and costume designs, and all Mattel did was repeat "We'll look into it, we'll look into it!" until the figures finally shipped, errors intact.

And when you mentioned how you could go in and repair the Blue Lion's neck ratchet, it immediately brought to mind an all-too-familiar rebuttal from MOTUC/DCUC collectors: "I can fix it, but on a $____ "adult collector" figure, I SHOULDN'T HAVE TO."

This toy is always going to have bad karmic stink around it for me. The completed Voltron is actually pretty nice and I think it looks awesome when displayed, but all the BS from a year of dealing with Matty and the final sticker shock when I realized how much I spent kind of sours the experience.

It's too bad such a great idea failed in execution. Reminds me of my MP-10 Prime I just picked up. Looks like a great toy until you start playing with and and you notice all the little stupid issues that make you go "Why did they do that?"

I thought someone said on one of the other lions that Matty only did refunds? Did you have to go through a lot of hoops to get them to exchange it?

Edit: Oh, I guess that was in your original review, and then The Big R commented too. So, is Matty Collector's customer service better now?

I just got my black lions. one of them was perfect, the other was missing the voltron chest part. now I have a voltron with no shield - emblem on the front and no way to release the head to robot mode. I am feeling this may effect my pre-order for caste Greyscull because imagine if that was missing the jaw bridge.

My black lion arrived today.
To sum up the whole thing. All the gimmicks fall flat. The figures are pretty awful. The quality is shoddy for its price. The joints are a bit restrictive and it leans forward in a static pose.
But it really is pretty massive and sitting atop my shelf millimetres from touching the ceiling it looks pretty great.

In fact the size reminded me of a jumbo, and that's basically what it is. A jumbo combiner.