Choujin Sentai Jetman, which began airing in 1991, is one of the best Super Sentai series to date! It could have even become the first series in the Power Rangers franchise; an honor that would instead go to Kyoryu Sentai Zyuranger.

Besides Jetman being an outstanding entry into the Super Sentai franchise, it is also a reminder of a different time in the franchise’s history and children’s television altogether. When Jetman aired, it was perfectly okay for heroes to drink, smoke, gamble and play a mean saxophone ( okay so the last one is not a bad habit). Gai Yuki, aka Black Condor, is the embodiment of that time in Super Senai history because he did it all! Gai is the bad boy in the series, who we learn to love due to his badassery and his human side. 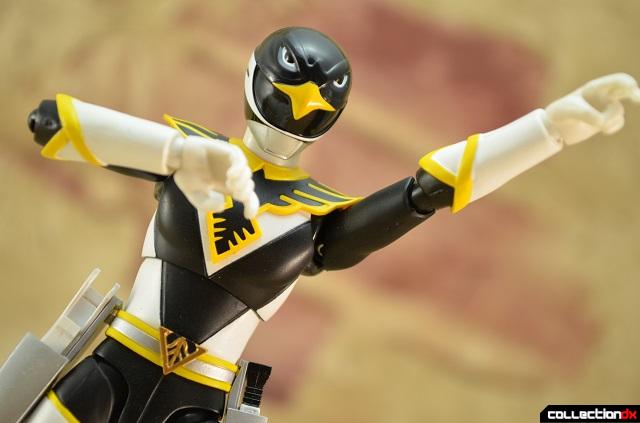 For packaging, Bandai has given Black Condor a nice retro-looking S.H. Figuarts box to call his home. 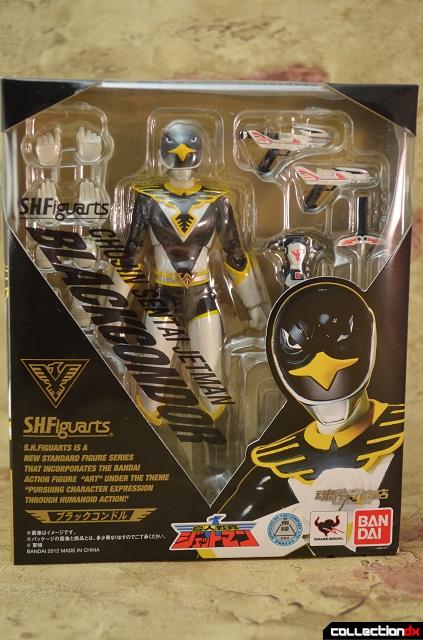 The window for the box is in the diamond shape of the Cross Changer, which is the wrist-mounted transformation device for the Jetman. 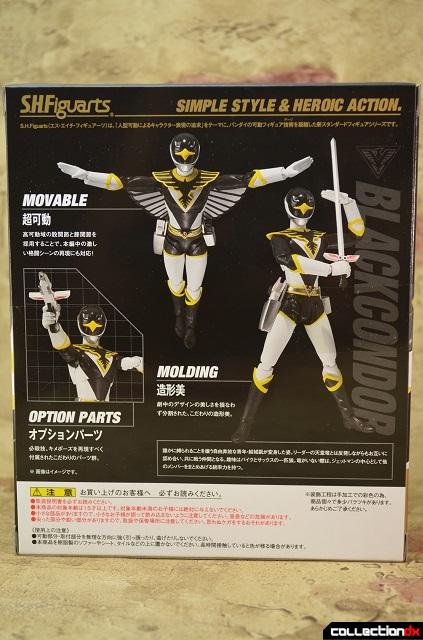 His suit has a bird motif to go along with the namesake of the character; a motif which is Super Sentai's homage to Science Ninja Team Gatchaman. Black Condor even represents the same bird as Joe the Condor, which is fitting since both are the loner characters in their respective shows.  Like Red Hawk, Black Condor’s S.H. Figuarts incarnation is rocking a sweet panty line. 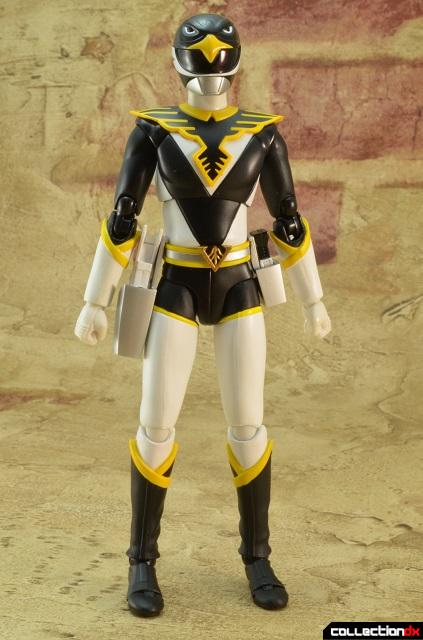 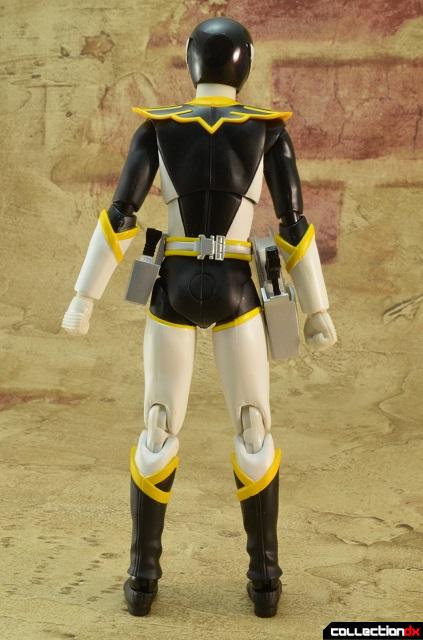 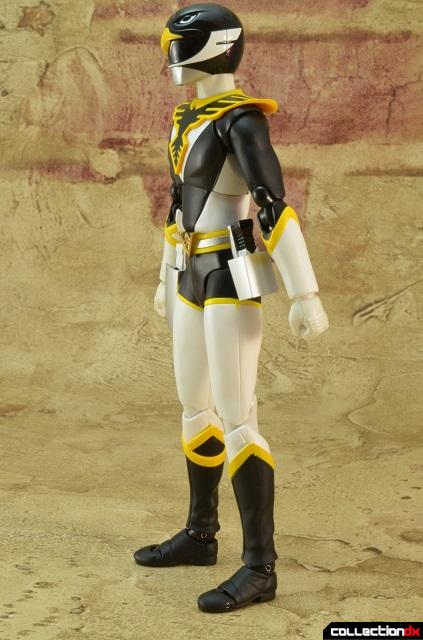 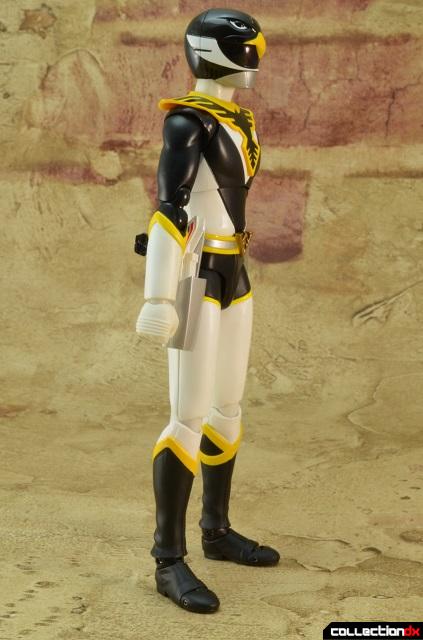 An iconic part of Black Condor’s suit, as well as the suits of the other Jetman members, are the wings. In the show, these are made fabric and are attached to the sides of the suit and the arms. Extending these cloth wings allows the Jetman to glide/fly. In order to recreate this, Bandai sculpted as separate back panel for the toy with wings attached to it. In order to attach this back piece, the original back panel simply pops off. This is cool because you check out some of the inner workings of a S.H. Figuarts without having to break one. 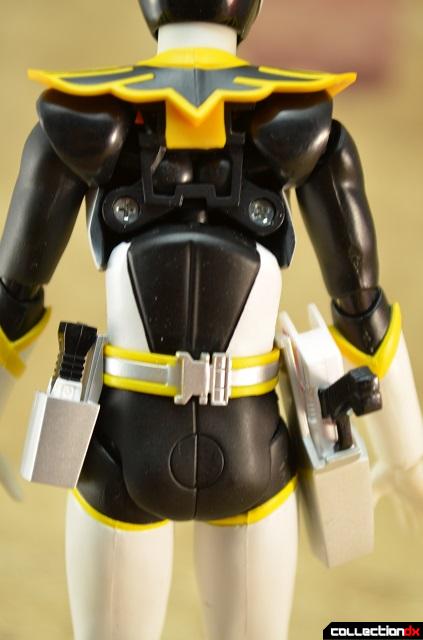 With the extra back panel attached and arms extended out, Black Condor shows us his flying pose. 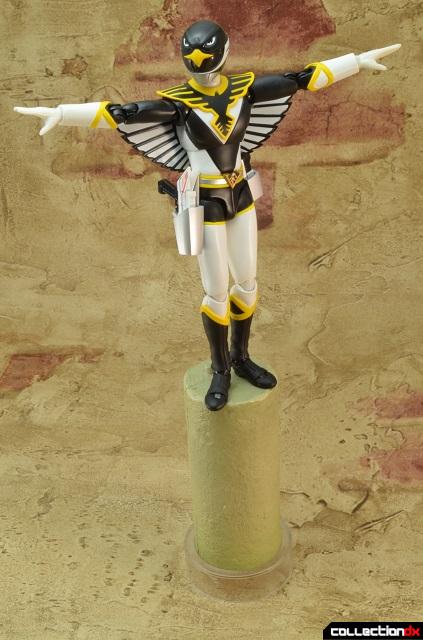 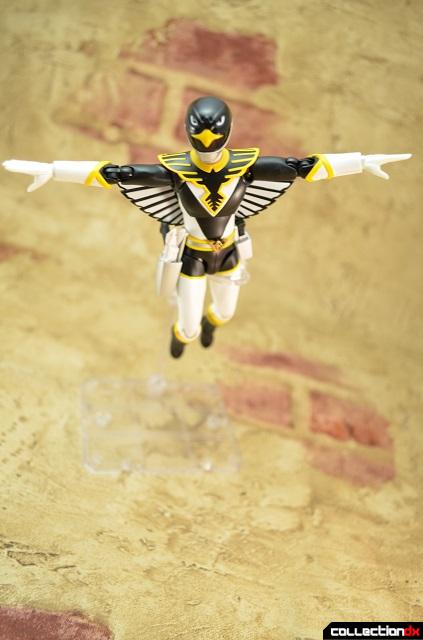 The only issues I have with the wings for these figures is that if the arms are not aliged right, it will leave a gap between the arm and the wings.

Moving onto the Jetman arsenal, Black Condor comes with a good amount of weapons, which are the same ones that Red Hawk comes with. Jetman was a Super Sentai season where all of the Rangers had the same set of weapons.

Black Condor has Wing Gauntlet to punch and/or shoot his enemies with! 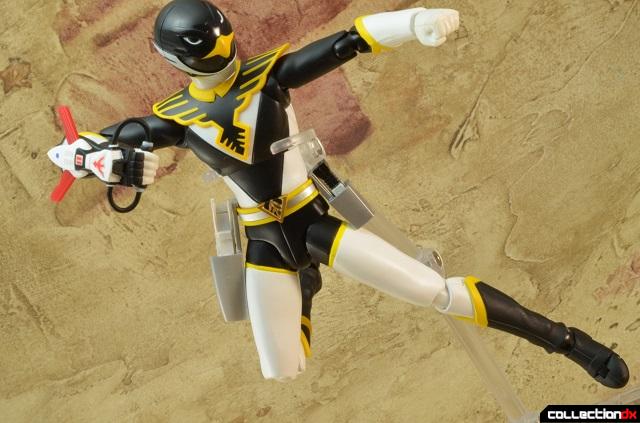 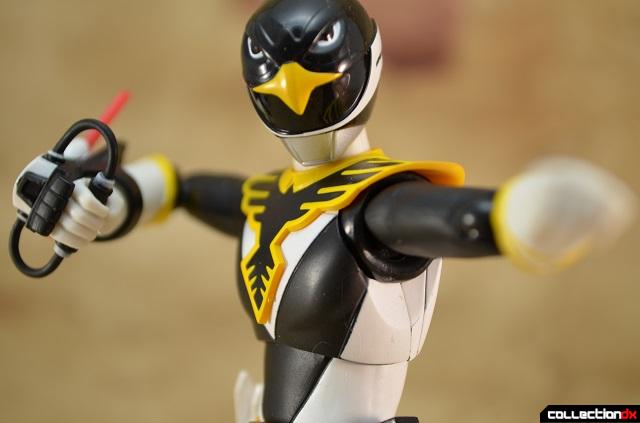 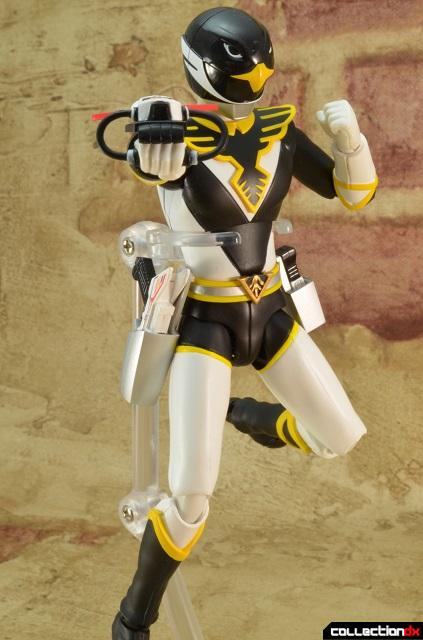 The Wing Gauntlet comes with its own hand molded into place.The gauntlet attaches by sliding over the forearm and popping the hand into the wrist peg.

Black Condor also comes with his Bird Blaster to shoot up some monster-of-the-week Jigens! 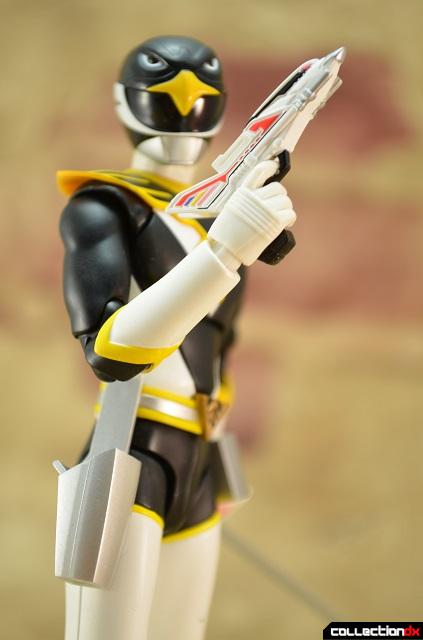 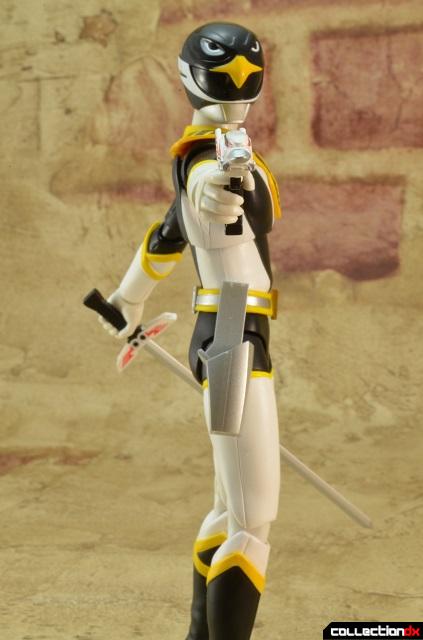 He also comes with his Bringer Sword! 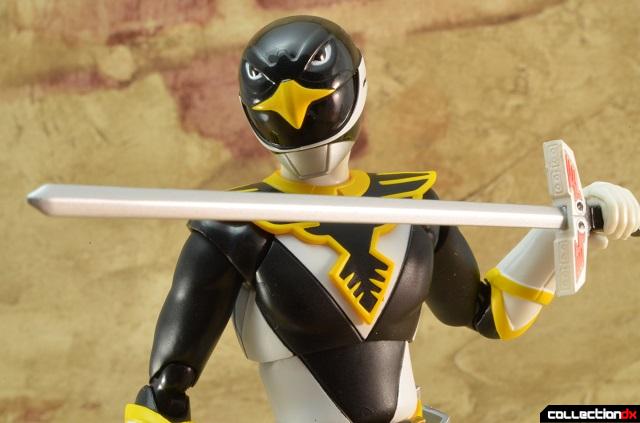 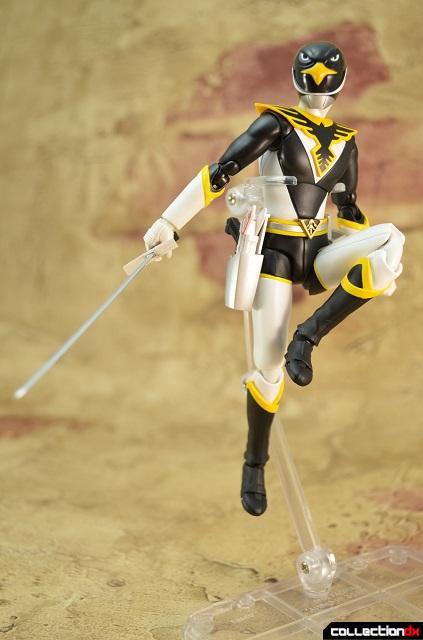 Also included in this set is a combination of the previous two weapons in the form of the Jet Hand Cannon. 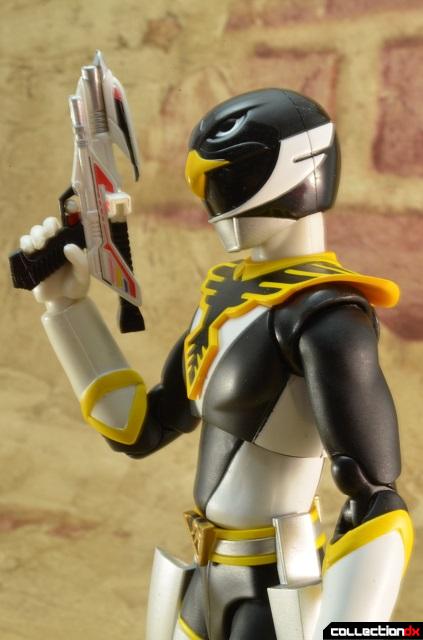 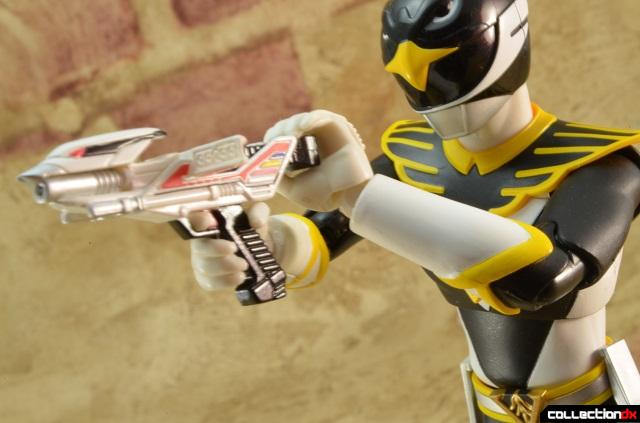 The only weapons missing from Black Condor’s, and Red Hawk’s, plastic arsenal are the Beak Smasher gun and the Smash Bomber, which are used by the Jetman during the latter part of the series

Articulation for Black Condor is pretty good. It has many of the S.H. Figuarts staples: double jointed knees and elbows, abs crunch, toe hinges, etc. Taking a knee is an easy feat for this Sentai hero. 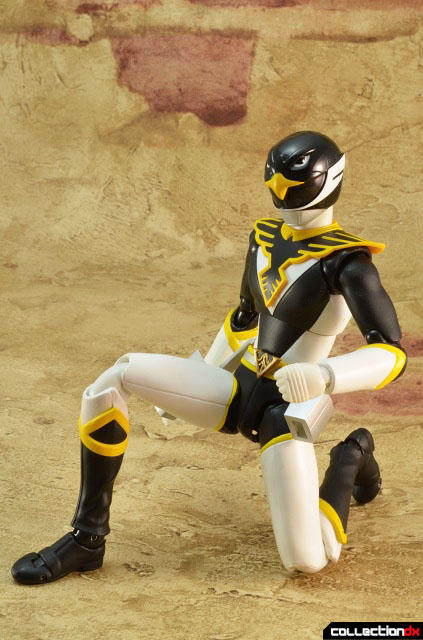 Black Condor does, however, lack a bicep swivel. This is a bit disappointing since there Jetman has a lot of great action scenes and the lack of a bicep swivel makes it a bit hard to recreate some of those scenes from the show.

Going into this review, I had feeling that this experience was going to be very much the same as S.H. Figuarts Red Hawk, sans the Jet Winger extra. 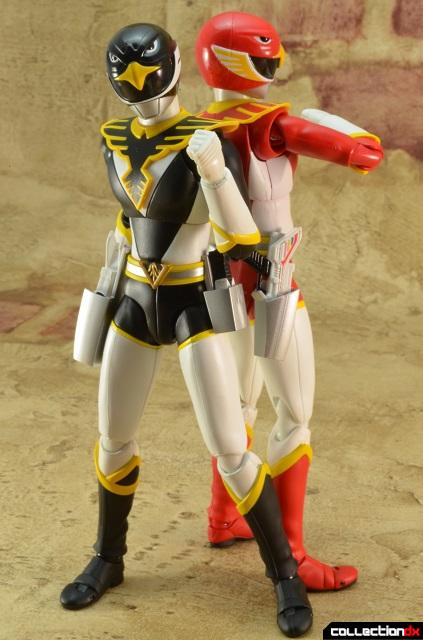 So while the Black Condor  S.H. Figuarts is very similar to Red Hawk, Black’s figure just oozes coolness out of every crevice; unlike the goody-goody Red Hawk.

Gai was so badass he even goes to great lengths to comes back in Kaizoku Sentai Gokaiger to teach Gokai Red a lesson. 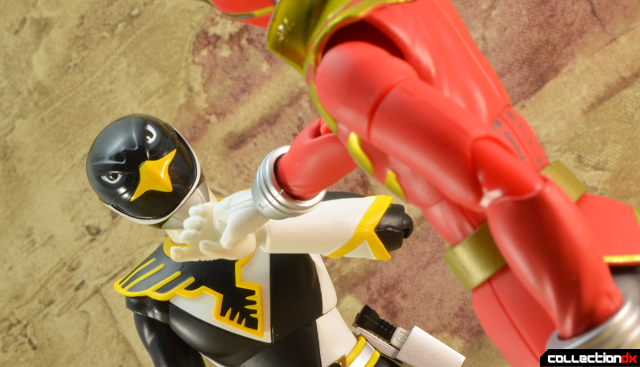 You punch like a girl! The Reds have certainly gotten weaker! 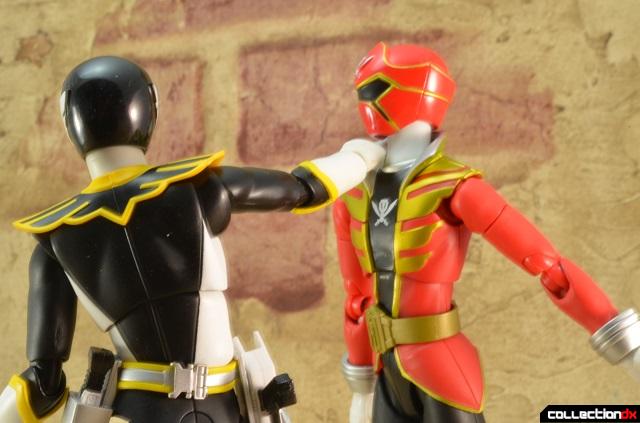 The Red I know would have put more spirit into it...Like this! 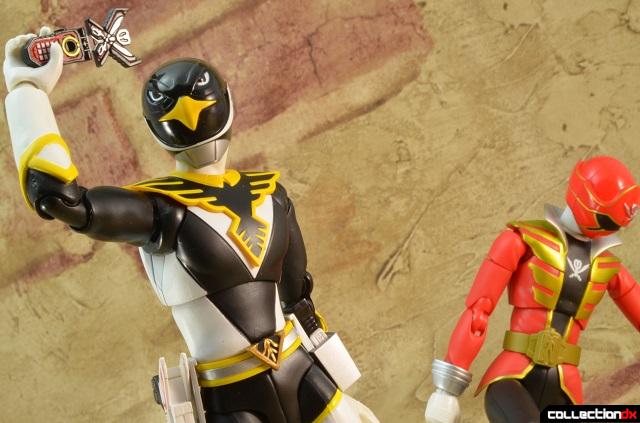 Later loser! I am taking your fancy phone. Come back and get it when you grow a pair.

Note: I may have paraphrased that conversation. 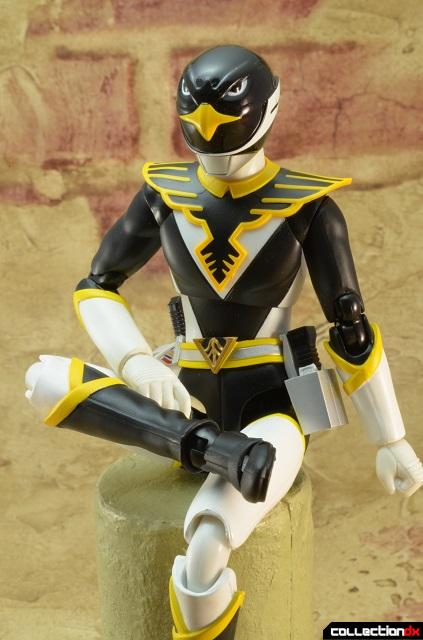 Some  may dismiss this as a repaint of Red Hawk, but fans of the Jetman series know why this is such a great character to  get the S.H. Figuarts treatment and a must buy toy.  This was a Tamashii Web exclusive in Japan, but luckily Bluefin secured some for the North American market. So while I would have totally paid the middleman service price for this great toy, it was great that I did not have to!

6 comments posted
I love this figure!

I picked this and Red Hawk up a while back, and I'm really glad I did. I totally blame CollectionDX for this.

I suspect that, regrettably, we're not going to see White Swan, Yellow Owl, or Blue Swallow. The Owl would need to involve several new body parts to be done correctly, and of course the female characters would need a new mold. I can't tell whether Red and Black's head sculpts actually differ, but Black is missing some minor paint detail. Jetman may be well-remembered, but it's not genuinely popular.

On another note, here's hoping Bandai reissues the Gokaiger Figuarts when Power Rangers Super Megaforce debuts. (And maybe released at TRU the way Shinken Red and Gold were...?)

Actually I think the odds of getting the rest of the Jetman team are pretty good. What appears to be the prototypes of White,Yellow and Blue appear in the first episode of Akibaranger. Plus, there has been a pic of these Figuarts going around the internets. That being said, they will no doubt be web exclusives. But I am okay with that, so long as we can complete the team. My understanding was that Jetman was very popular when it came out; it actually brought back the franchise from a downward trend.

Red and Black's helmets do look similar, but there a couple of difference like the eyes and the brow lines.

I think that more Figuarts at Toy R Us would require big following; even bigger than Samurai ,since the Shinkenger Figuarts didn't seem to sell so hot. There are a ton of them warming the shelves at the Toy R US stores near me.

"This is cool because you check out some of the inner workings of a S.H. Figuarts without having to break one."

Hah! I kinda wish Figuarts were a little more disassemblable. I always want to dismantle a figure and make sure all the joints are working smoothly, make sure I know how far each one can move before it's under any stress.

"Actually I think the odds of getting the rest of the Jetman team are pretty good. What appears to be the prototypes of White,Yellow and Blue appear in the first episode of Akibaranger."

...wow, is that how Bandai is teasing new products now?

I know what you mean. I would love to take apart a Saint Cloth Myth Body, so I can fix a couple of them that have loose joints. But they are just too pricey for me to consider dismantling.

It appears that Bandai is tying the S.H. Figuarts Super Sentai releases to the appearance of the characters in Akibaranger. The scene where the Jetman Figuarts appears is one in which the main character is having a dream about something that had happened, only the other Sentai teams were toys. Is it a bit of shameless promotion? Yes. Do I care? No, so long as they follow through and release the rest of the Jetman team.

My problem with those prototypes was Yellow Owl. He looked to be using the same body as Black and Red. BAD BANDAI. I WANT A CHUBBY FIGUART.

He was definitely slimmer than he should have been. I hope they fix it if and when it goes into production.