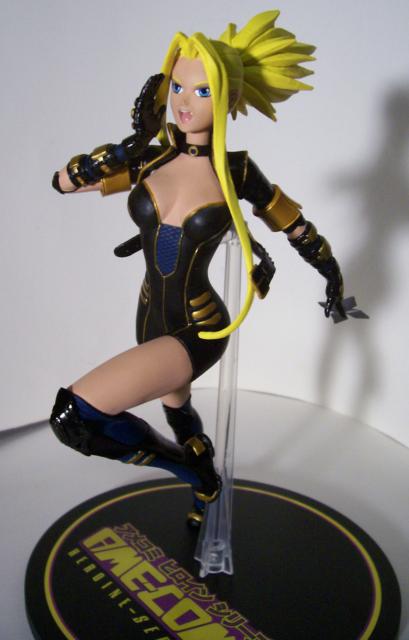 Black Canary is probably one of DC Comics’ best-known female characters after Wonder Woman and in the last 10 years under the auspices of writer Gail Simone she’s become one of the most charismatic, kick-ass martial artists in the DCU. So, it’s great that a modern Black Canary, who lives up to her comic book reputation (and sonic canary scream!), has been introduced to the Ame-Comi line.

Designed by Udon Studios, 2009 sculpted by Jack Mathews. Distributed by DC Direct. SRP is 55.00. The figure is a 9 inch PVC statue with no articulation. Comes with base and is mounted on a plastic J-Hook that connects from her back into the stand. Comes in a 4-color window box. 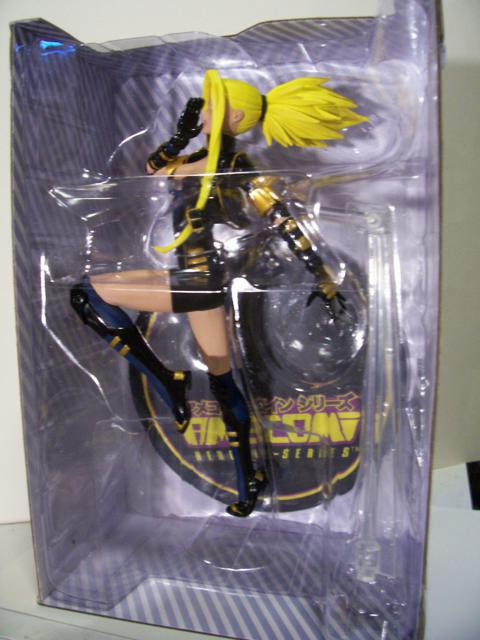 The Ame-Comi line covers anime style “reimaginings” of established DC characters and this represents the latest wave from this line. The Ame-Comi statues have, for the most part, improved greatly since the first ones were released. There are some imperfections, resulting from the mass-production aspect of these figures but paint, sculpt, pose and overall presentation have all been greatly improved over the years.

The sculpt/pose is the key charm to this statue. I think, it pretty perfectly captures the essence of the character. She’s running, and getting ready to project her sonic canary scream. They’ve opted to sculpt/paint the most jumpsuit outfit with the leather jacket but minus the earlier character’s fishnet stockings. The sculpt captures the great curvaceous legs and buttocks of Black Canary. 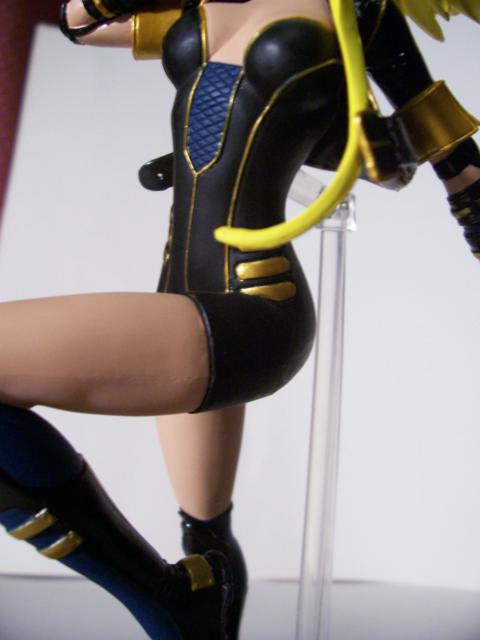 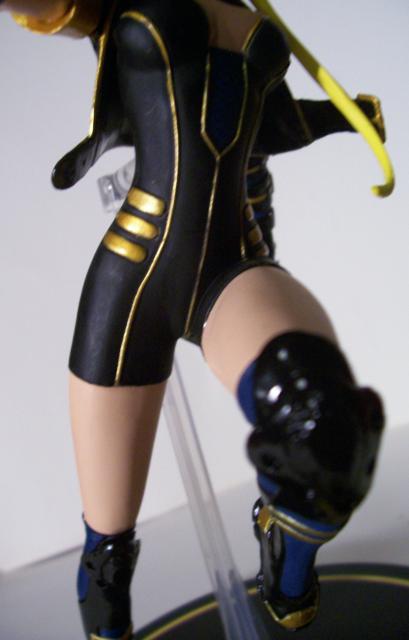 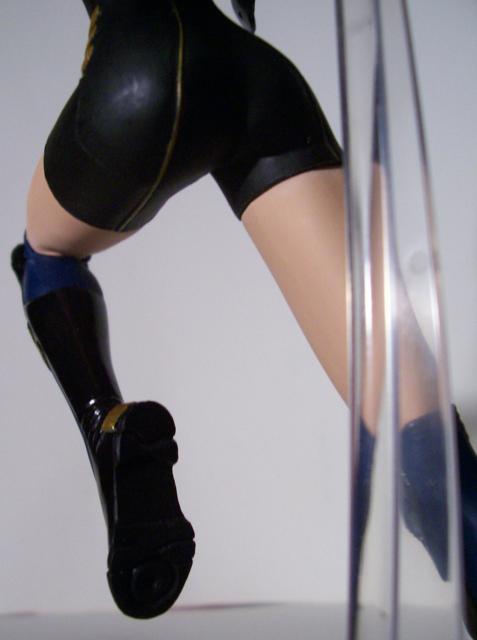 This statue isn’t nearly as provocative as some of the other characters, which aids in the more serious tone of the pose and her maturity. Her pose evokes adventure and boldness rather then the frivolous sex-kitten look that the other statues have. Black Canary is sexy without distracting from her bold tone. 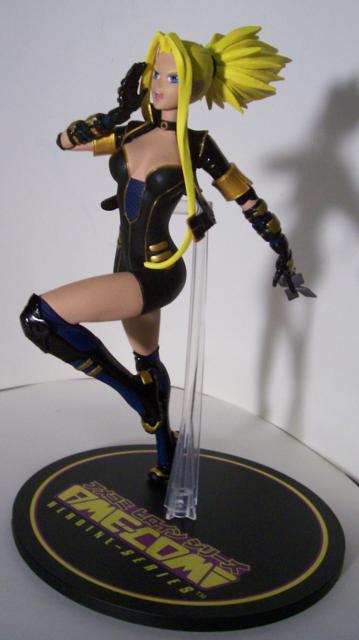 Details are nice. Her outfit’s got lots of fine details and you have small touches, such as the throwing star in her hand that evokes her martial arts prowess. Again, the mass-production is a significant shortcoming with some of the details. The costume details on her front, for example still look like they’re nearly flush with the surface of the statue rather then like a real outfit as one sees in some Japanese figures. 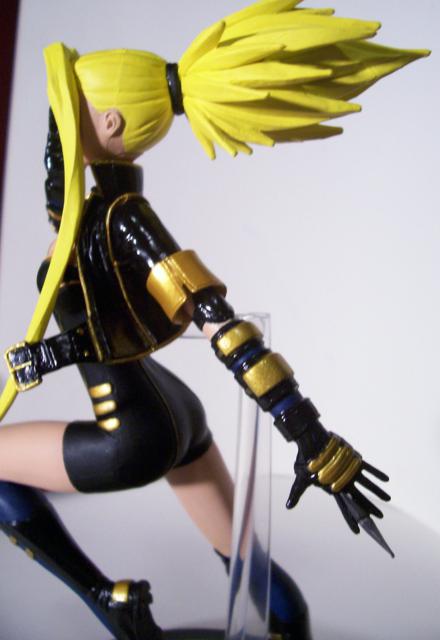 Paint for these characters has improved since the first few statues without the blending of colors that plagued the line in the early figures. But there are still a few annoying bits. Black Canary’s hair has a huge, obvious seam that is pretty evident from a casual observation. 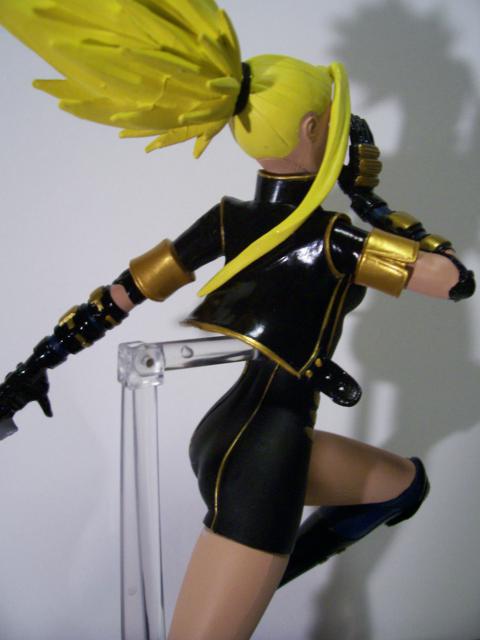 One of the huge shortcomings of the figure is tied to the character’s great pose. In my statue, the J-hook does not tightly articulate into the hole in the statue’s rear. It seems stable, but any manipulation causes the statue to topple over. Thankfully, the statue is pretty sturdy and can take a fall or two. The character’s pose doesn’t really allow it to stand on its own two feet-its entirely dependent on the J-Hook attached into the stand and the peg that articulates with the foot. 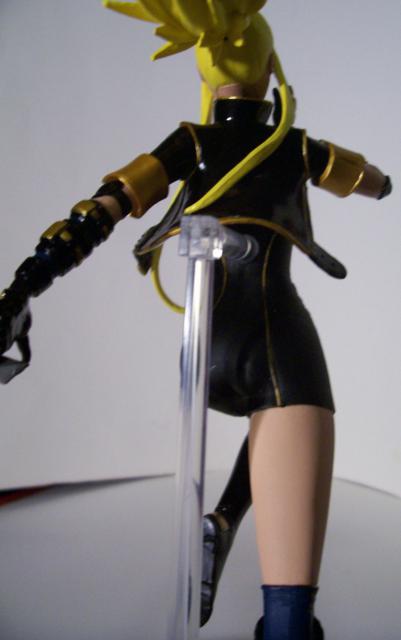 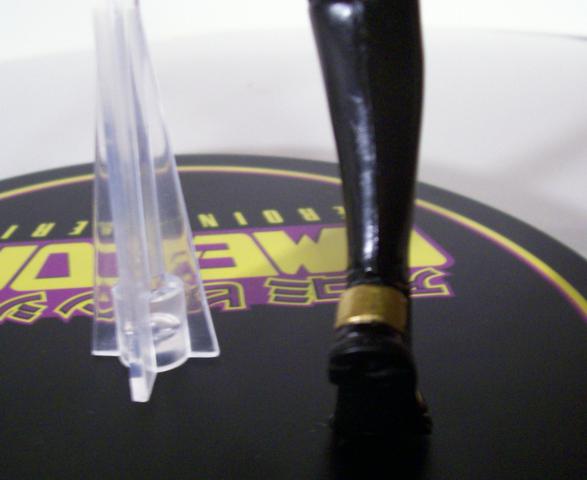