My dad was born in the late 1940s and although he grew up loving the classic monster movies, eventually helping pass that love on to me, by the time the real monster craze of the 1960s hit, he was already out of school and working, later in the army and starting to raise our family. Suffice to say, building monster model kits was not how he ever spent his spare time.

For myself, I hit the scene in 1975 and although I do vaguely remember seeing monster models in stores and even had some of the plaster casting kits, by the time I was old enough to actively want my own toys, Star Wars had been released and action figures were the new thing. So I never learned how to assemble and paint models, either on my own or as a hobby passed down from my dad. And the more I get into monster collecting, the more it becomes apparent how ingrained this activity is into the lives of the "Monster Kids".

But, what does that have to do with the toy reviewed here? Well, in late 1964 the famous model company Aurora released one of the all time classic monster kits, the Gigantic Frankenstein. Unfortunately, the kit didn't sell well (I've read that it was due to it's whopping $4.98 price tag) and unlike many of the other kits in the line, was never re-released, therefore making it a holy grail of monster collecting. Last time I saw an unbuilt Gigantic Frankenstein kit on Ebay, it sold for well over $3000.

Fortunately, if you can't get an original and/or don't know how to build models, an unknown Japanese company made this soft vinyl recast several years ago. I'm not sure of the exact release date, but I think it was late 90s/early 2000s. 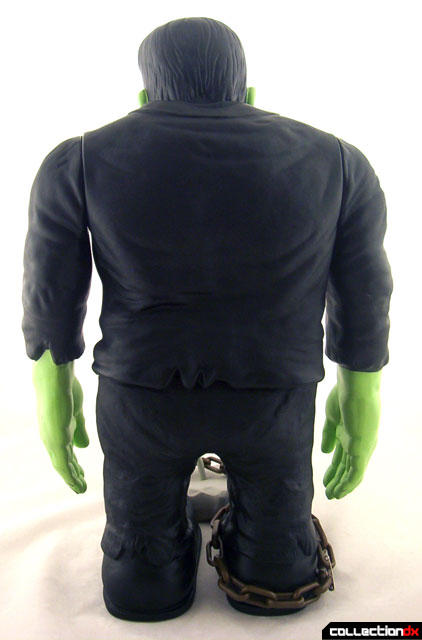 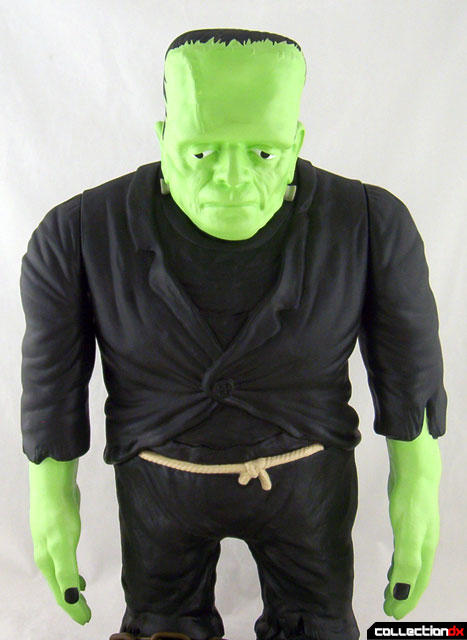 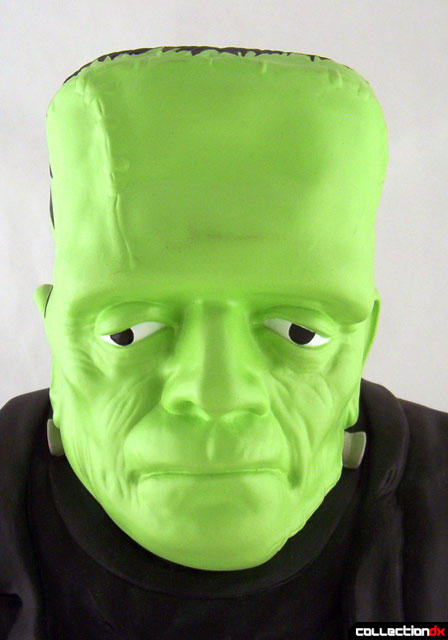 At 18" tall, Big Frankie stands slightly smaller than the original completed kit and is a significant piece for your monster collection. He is articulated at the shoulders only, allowing you to raise and lower the arms. 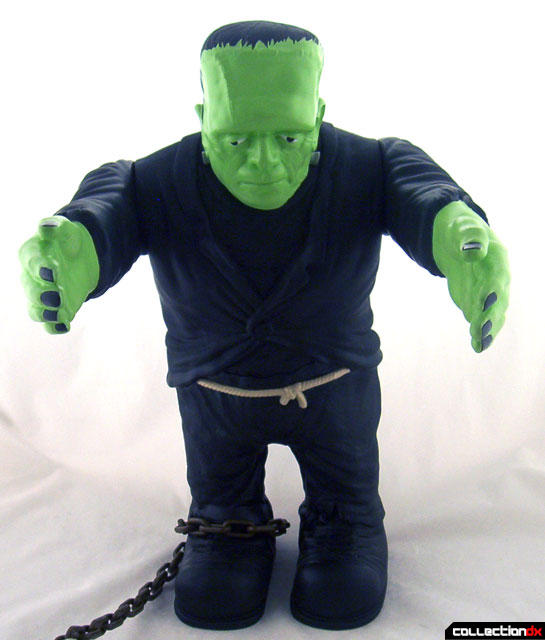 Big Frankie also includes replicas of the chain and stone that came with the original kit. Perhaps the only way it does not live up to it's predecessor is in the paint application, which is a little bit dull here compared to some of the truly beautiful paint jobs I've seen on vintage build-ups. Naturally how nice a built up Gigantic Frankenstein looks depends on the skill of the painter and I suppose if you were so inclined, you could also repaint this vinyl to your liking, too.

The Big Frankie pictured here came in a brown cardboard box with the image of Frankenstein from the original kit's box printed on the front in black. I've heard that it was also sold in another box with a die-cut window, but I have not seen that one. I've also heard that some were sold with no box at all. So if you get a loose one, it doesn't necessarily mean it's "incomplete", although naturally for me, I preferred waiting until I could find a boxed version.

The Japanese Big Frankie toy is a great alternative for collectors like me not interested in traditional plastic model kits. But if model building is your thing, fear not. At long last, the original Aurora Gigantic Frankenstein model kit is set to be re-released this summer from Moebius Models (at a significant markup from $4.98 though..). So now there is no reason for you not to own a Big Frankie! 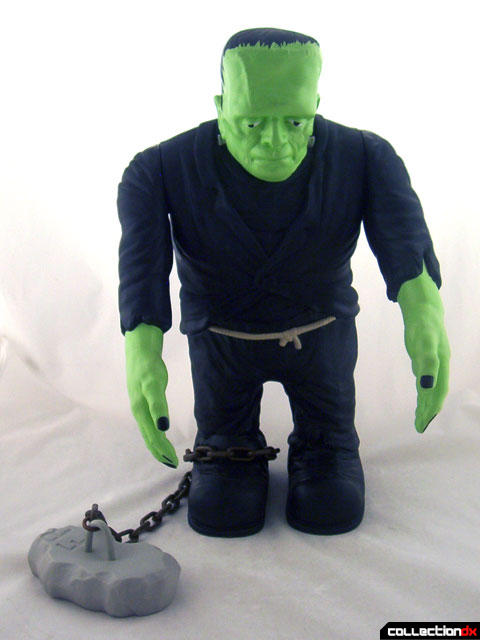 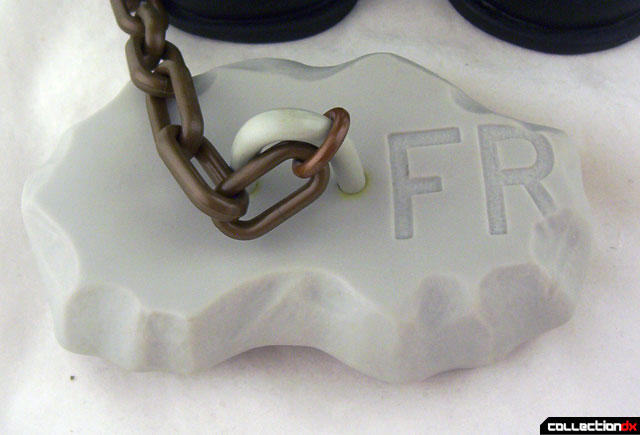 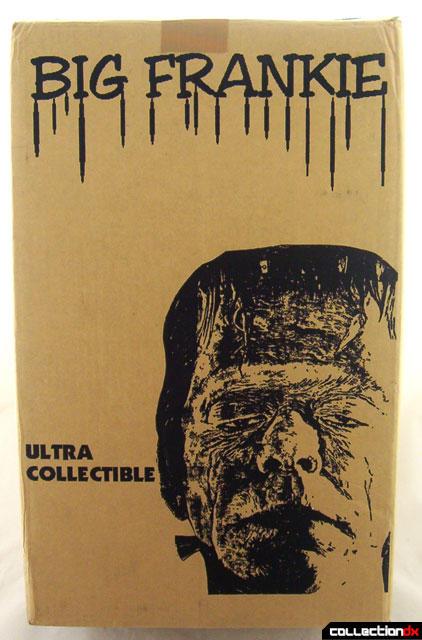 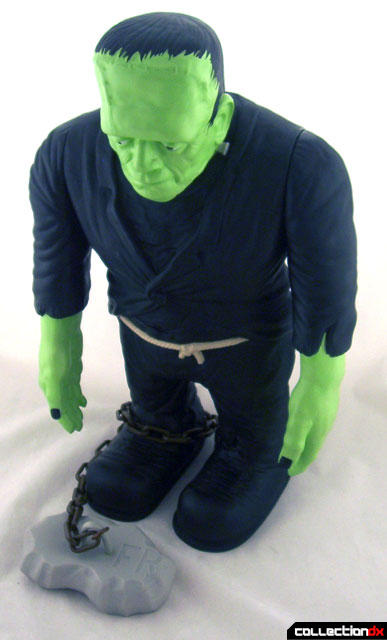 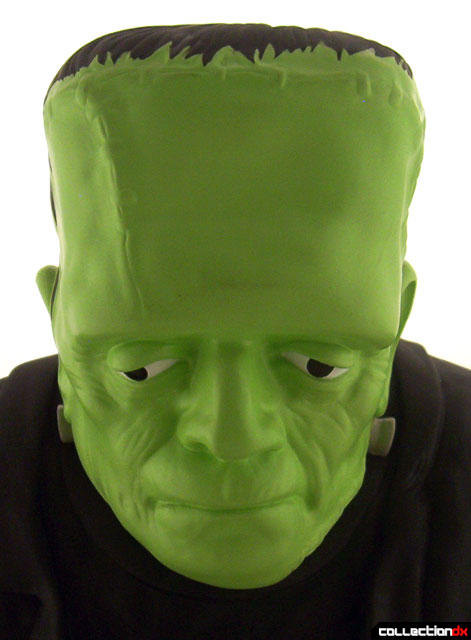 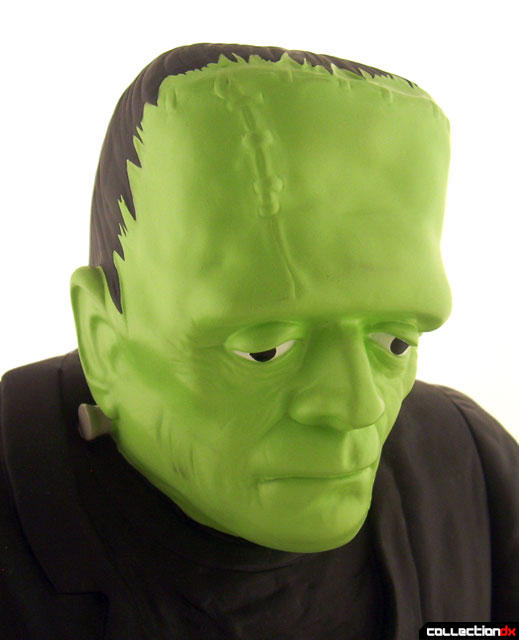 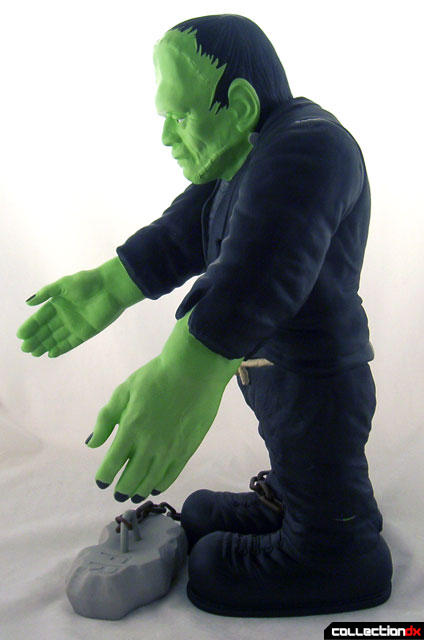 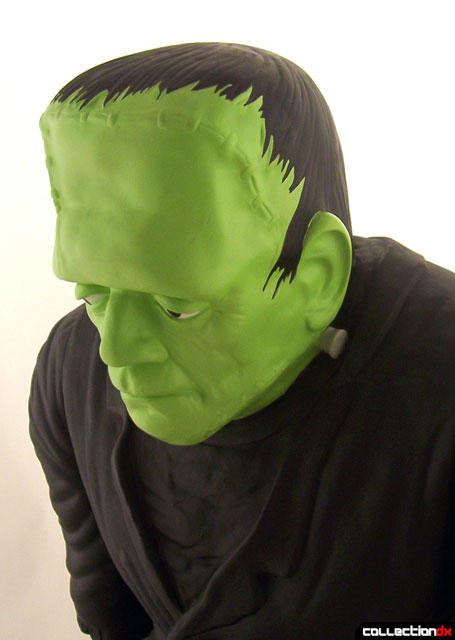 I guess the box wasn't joking where it says "Ultra Collectable."

As someone who's mostly interested in metal robot toys, you can sometimes forget just how many other types of collectable toys there are.

It kind of makes you wonder, what are the toys being made today that'll fetch that money fourty years from now?

Sorry, perhaps I wasn't clear enough. There's no way this toy reviewed would sell for $3000, unless someone wants to make me an offer! No, I meant the original Aurora model kit from the '60s. I paid about $65 this toy. ;)

As for what will be worth big bucks 40 years from now, I'm gonna guess something that was NOT produced as a collectible.

I do know what you meant. Still, I think the fact that this toy used the cast of a $3000 toy is exciting enough.

Edit: After taking another look at Frankie's arms outstreched photo I suddenly feel the need to give the guy a hug.

Frankie's a big hunk o' shelf hogging, jumbo swatting vinyl you got there Dave! Thanks for pushing stuff like this into the light of day for the rest of us to discover. This one looks like he'd squash the more recent Build A Figure 14" Frankie.

I have forgotten about that rare Frankenstein Aurora kit. Somewhere in one of my old Fine Scale Modelers is an article about that kit. I just thought it was so silly that it was such a stubby looking Frankenstein and it was so expensive even back then! Now I think that kit is quite charming!

Monster and surf model kits is an entire genre unto it self with Aurora, Hawk, Revell et al producting some facinating and odd kits that would never even be considered being produced today. Somewhere I have a Rat Fink model that I need to review. In the 1980's I remember getting a mailer for odd and rare figure kits from the 5T's and 6T's and they in the $500-$1000 which was a lot of money back then.

Thanks for jogging my memory on the frankenstein kit/vinyl!
Cheers
LF

I'm not familiar with that article you mentioned, but there's another good one that one of the members of the Universal Monster Army posted here. It's a pretty interesting read, and includes a picture of the original clay prototype.