My first exposure to this toy came at just about the earliest point in my machinder collecting "career". I remember seeing one of these loose on Ebay before I had any idea of what it was. I didn't think much of it at the time, because I didn't know enough, but the intervening years have shown this to be a rather uncommon toy. It's not insanely rare, but there are not many of them out there, and in fact, I think many people don't realize that there even is a bootleg of the Popy Battle Fever J jumbo. 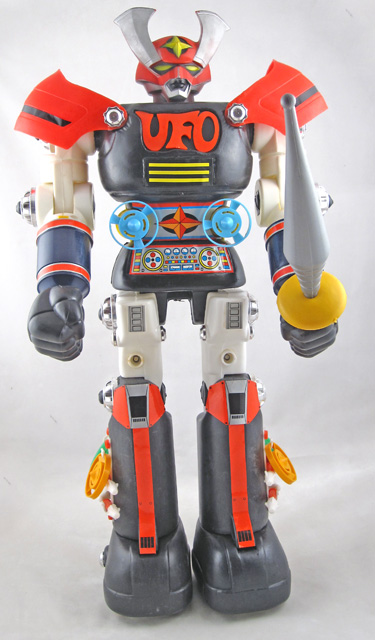 Out of all the Robot Factory style jumbos that were sold in Italy, this one probably comes the closest to looking like the toy it is inspired by. For the most part, it is the same toy, with only some minor alterations here and there. Of course, the most obvious give-away that this is not the real deal is that the "BF" from the chest of Battle Fever has been replaced with "UFO". Additionally, two disc launchers have been added to the hips, much like on the Space Valour bootleg. 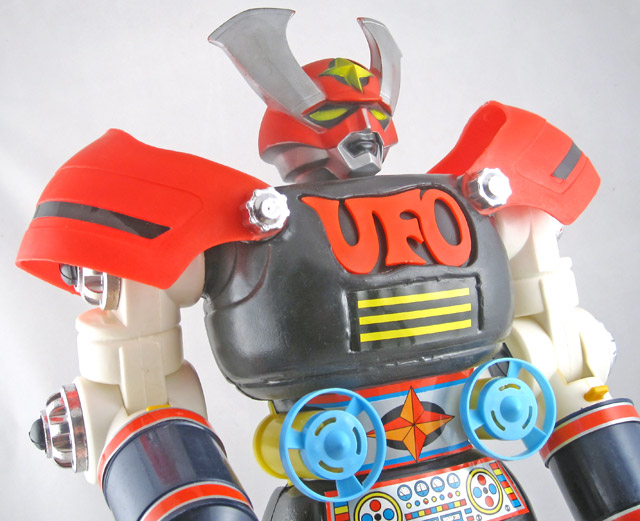 "UFO" still shoots some regular missiles, but not from the same location as on the original. Instead of having one launcher in the pelvis, there is now one on each leg. With all this new firepower, the toy now has 12 missile clips (6 on each leg) to hold the extra missiles and discs. 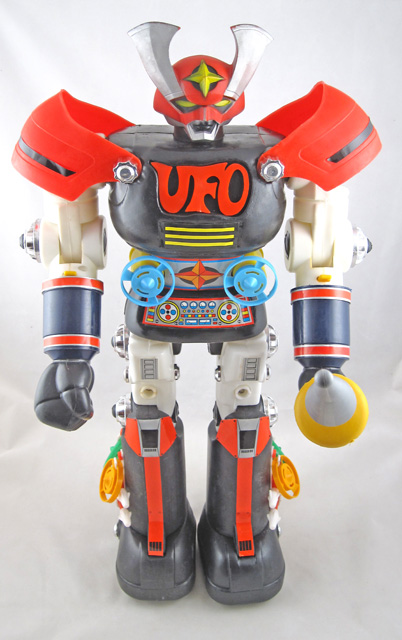 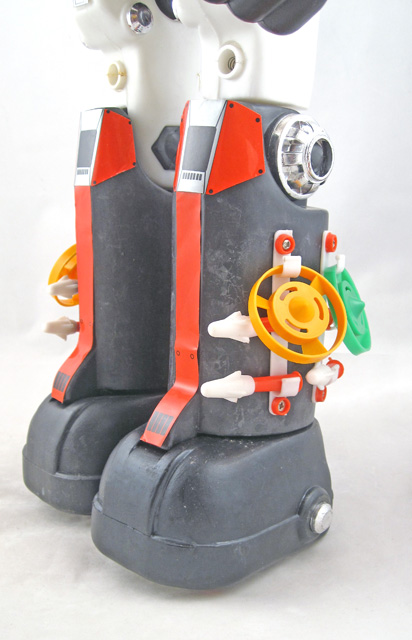 Besides the addition of the new disc and missile launchers, the bootleg version has also added a sword to the arsenal. This is the same sword (original seen on the Takatoku Daikengo jumbo) that comes with basically all of these kinds of bootlegs. I think that Titan and Gundam are the only ones that do not have this sword.

Now, besides all of these more obvious changes from the original Battle Fever jumbo, there are also myriad more subtle alterations. One thing that tends to jump out at me is that the neck on the one has been shortened. It's a slight change, but causes a big difference in appearance. Another thing that of note is that the original toy does not have wheels on the feet, but for those people who think that is a key feature of any jumbo, well, it's been "rectified" here with two big white wheels on the bottom of each foot. 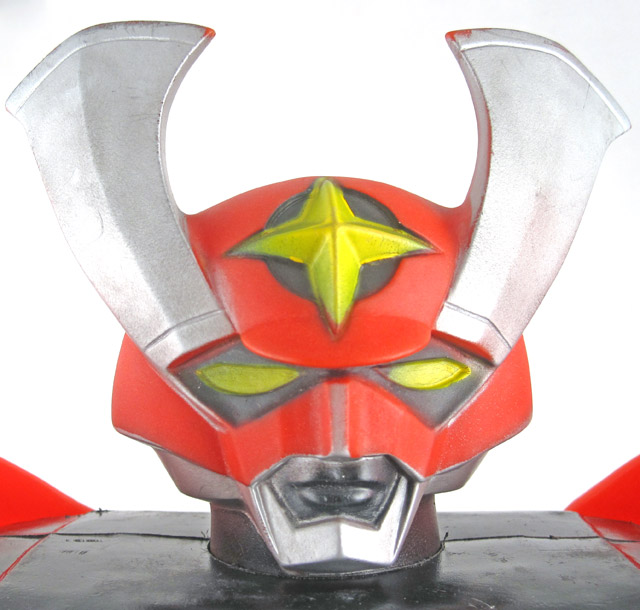 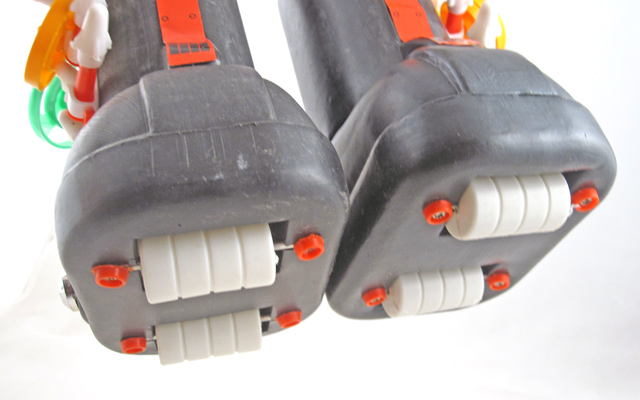 Moving along, the stickers here are different as well. Along the waist, you can now see a one-piece sticker that shows various knobs and dials, instead of the six individual yellow stickers on the original. Above that we also have a new waist sticker, showing a unique cross design instead of having the robot's name. Now above that it may look the same, but it's actually different. Both robots have three yellow horizontal stripes beneath the chest insignia, but on the bootleg version, this is in fact one solid sticker with a black background instead of three individual yellow stickers. I actually like this change a great deal. I remember being very annoyed when I put the stickers on my Popy version because I found it difficult to line them up just right. (I am easily aggravated by stuff like that!). 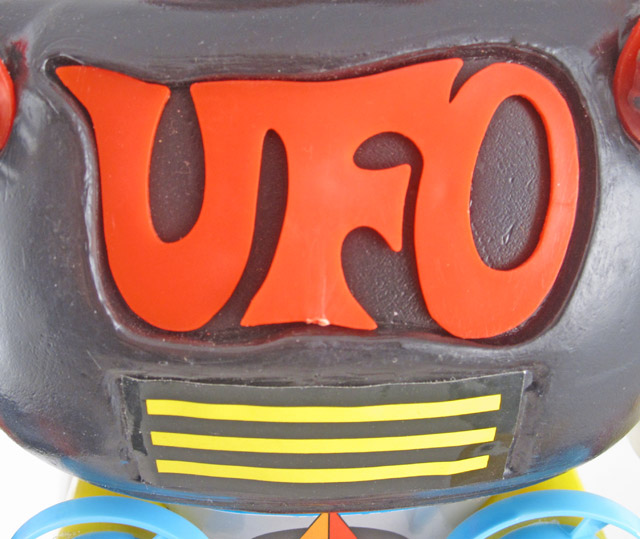 So far as I can tell, those appear to be all the changes from the Popy toy to the bootleg version, but I believe there are also variations among the bootleg versions. On my version, there is one long bar that runs through the upper torso and connects to the top part of each arm, just like on the original toy, but there is also another version instead of one long bar: you get two short bolts that connect the arms to the torso. I'm told, however, that this version does a very poor job of actually holding the arms in place, so my assumption is that the manufacturer (a company called "Simpex") may have produced this version first, and then corrected the problem with the long bar on later releases. The fact that the back of the box shows all the parts, but no long bar, makes me think that they did it this way and just never bothered to produce a second box.

Here are some pics of this variation, courtesy of CDX user Jerilock. 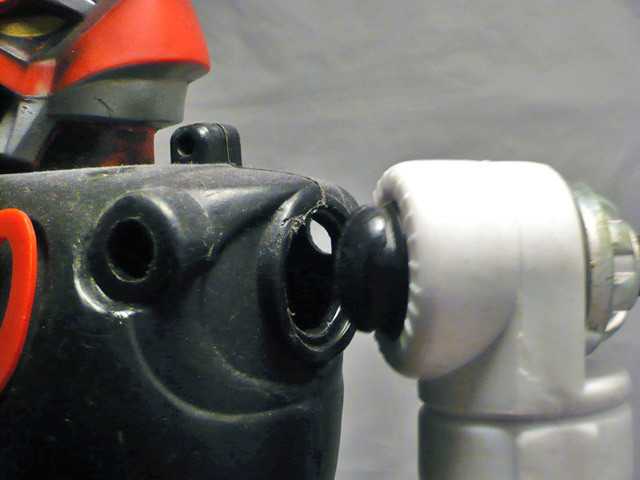 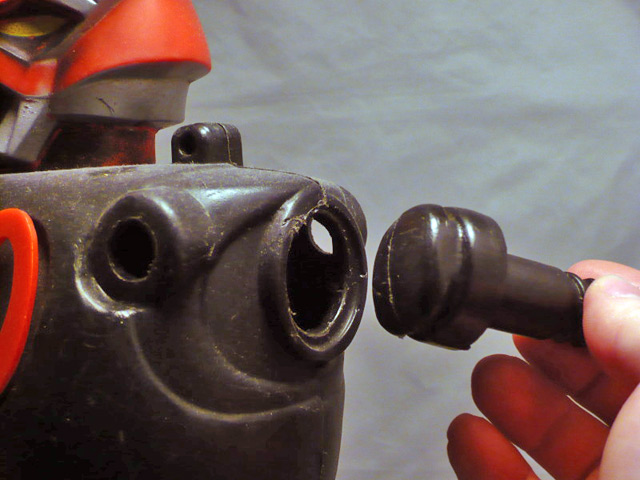 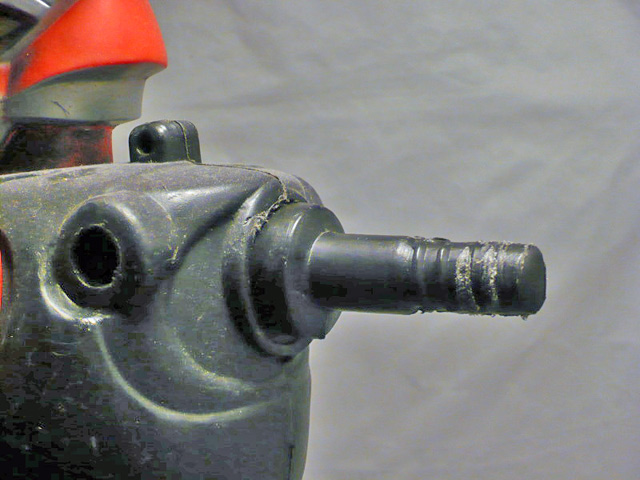 Even though mine came with the one long bar, the box shows the two smaller pieces shown below. Notice also the chromed "UFO" piece. Must have been the prototype pictured as I've never seen one like that. 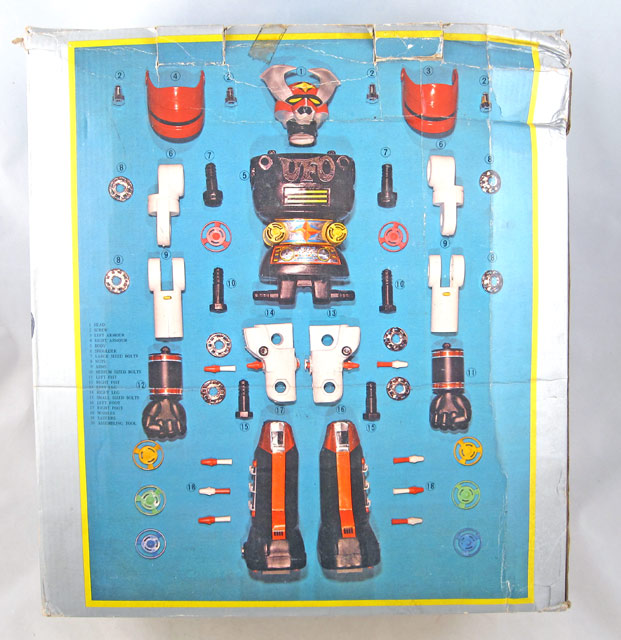 Speaking of the box, I think it's time we take a closer look at it. The front, top lid and both sides all feature original artwork. Although they are very crude, I've come to really love the boxes for these toys. In fact, in a later review, I'll try to show them all at once and point out then how interesting they are when viewed all together. 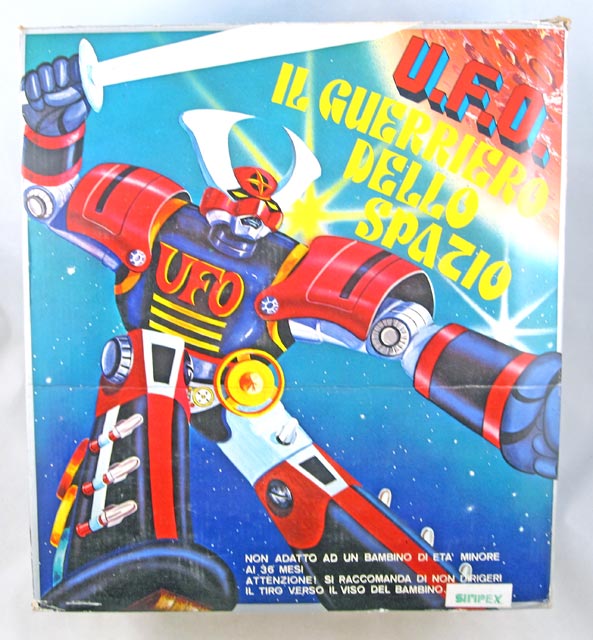 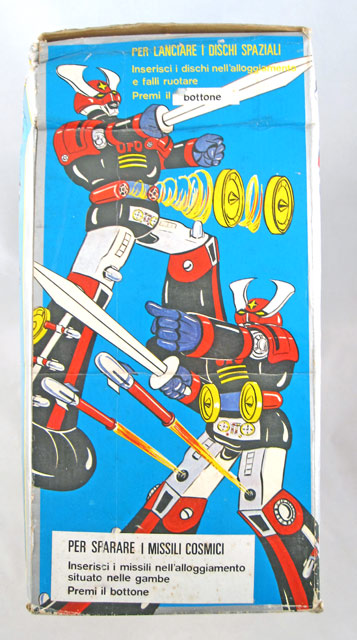 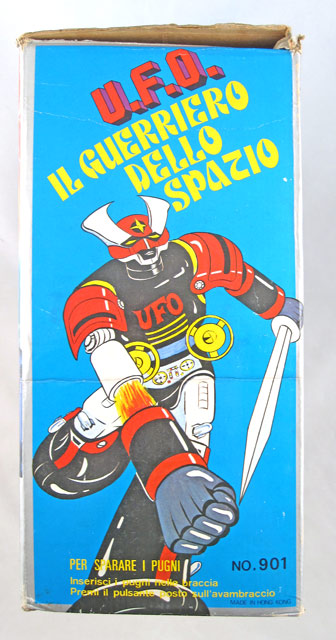 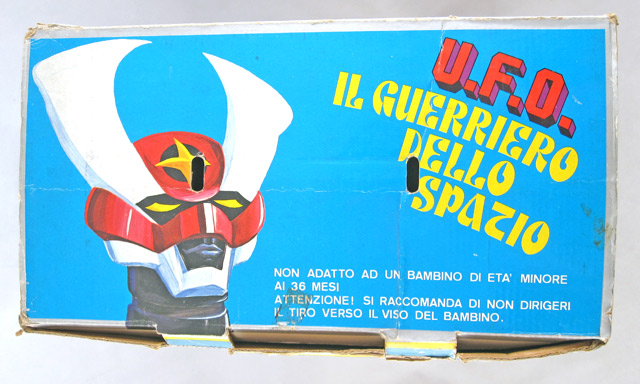 As a huge fan of bootleg machinders, I love this thing, but if you are looking for a Battle Fever jumbo, you're better off getting the real thing. Not only is it a nicer toy, but it's actually easier to find. Here's a comparison of the two toys. 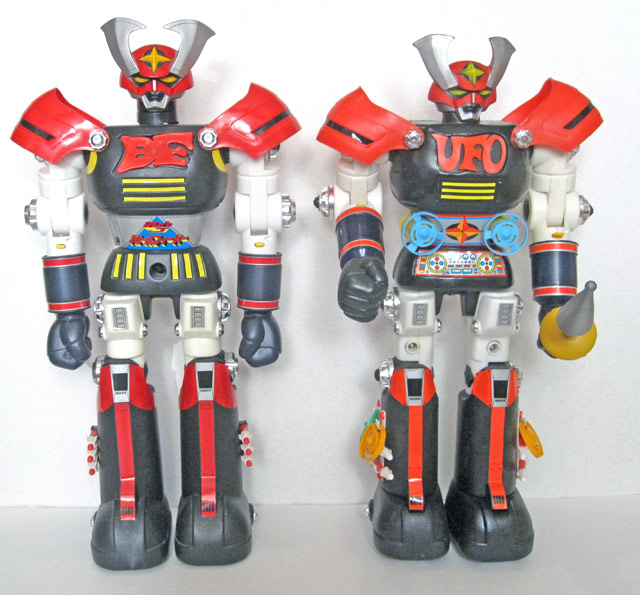 One last thing, just for fun, here is a rare catalog shot of this toy (and others)! I've never seen any paperwork on any of these toys before this one and sort of just assumed that they were never really advertised, seeing as how they are not exactly legitimate. So, I think it's pretty cool to see. Also, notice that there is also an alternate package for the Space Robot toy I reviewed previously, as well as other neat stuff. Enjoy! 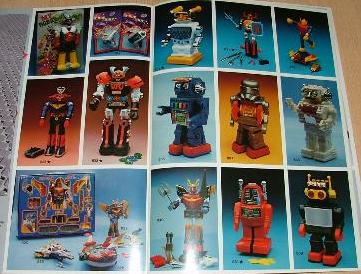 "I'm told, however, that this version does a very poor job of actually holding the arms in place,"... Yeah... a "poor job" is putting it mildly... when I pulled that down from the jm shelf to take those pics, both arms popped off, when the left arm hit the ground the rocket punch went off and hit me in the foot.... awesome review though, glad you were able to snag one of these finally.... now if only you could track down a box for a gundam junior......

Really interesting review of a too much unknown figure. Both original and bootleg version are fascinating since Battle Fever robot still very much unknown while its samurai look keeps it amazing.

I'd just reiterate what MisterK said! Nice shot of the original and bootleg side by side. The whole samuri-esq' design is great, one of my favorites.( I love my BanDai GX-30 SOC)
About the only figure I truly admire in the Super Sentai world.