In 1987 a team of elite team of American commandos entered Guatemala on a rescue mission.  As members of his group are picked off in the jungle, Major Dutch Schaefer realizes something is hunting his team.  Wounded and alone, Dutch manages to lure the creature into a final confrontation where its true nature is revealed.  Standing seven feet tall and adorned with trophies and fearsome weapons, the Predator challenges the last of its prey to a duel. 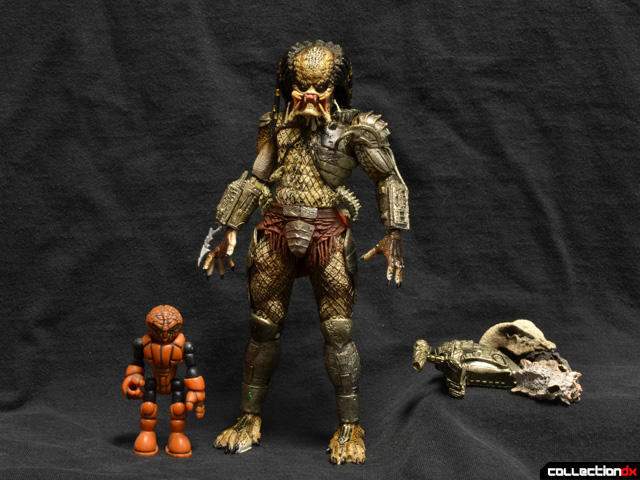 You're not supposed to start the show with a showstopper, but I could not help kicking off my Predator reviews with my favorite so far.  The battle damaged Jungle Hunter Predator stands over seven inches tall and features loads of articulation and detail.  The unmasked version shown here is half of a Toys'R'Us exclusive two-pack with the battle damaged City Hunter Predator from Predator 2.  The two-pack comes with a pair of exclusive trophy skulls.  Jungle Ped's only accessory is his plasma caster backpack. 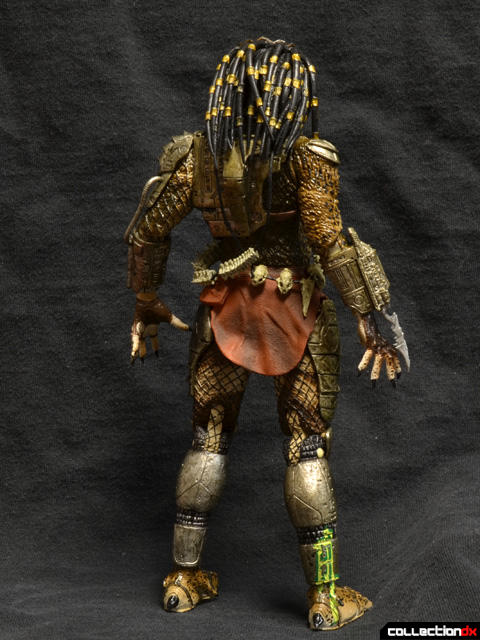 The fit and finish is excellent.  All of the joints are nice and tight, and the paintwork is almost completely slop-free.  The netting is a source of some criticism on the internet.  The body netting detail is molded on and finely painted, but not all of the netting is quite fully painted.  Having small gaps seems better than the alternative to me, which would be having too-heavily painted netting that looks sloppy and covers detail. 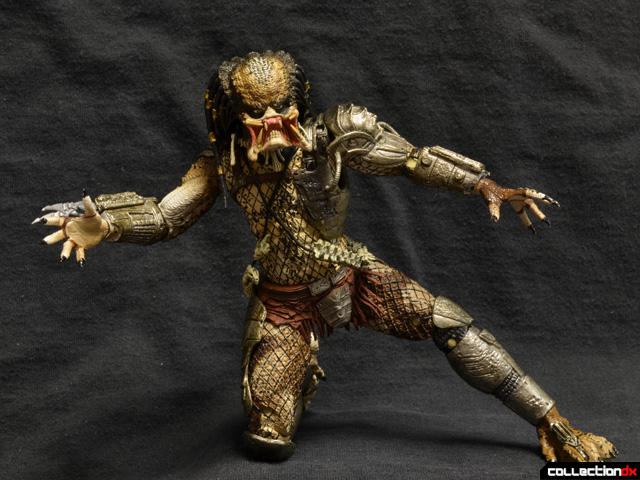 There are some slight differences in articulation on the different Predator sculpts, but they all feature a wide range of motion.  Jungle Pred's articulation includes ball and swivel shoulders, elbows, and hips, a ball-jointed neck, a swivel waist, double jointed knees, and ball-jointed ankles.  He's not as dynamic as a Toybiz-era Marvel Legends figure, but he moves enough to do what he did in the movie and looks a heck of a lot better doing it. 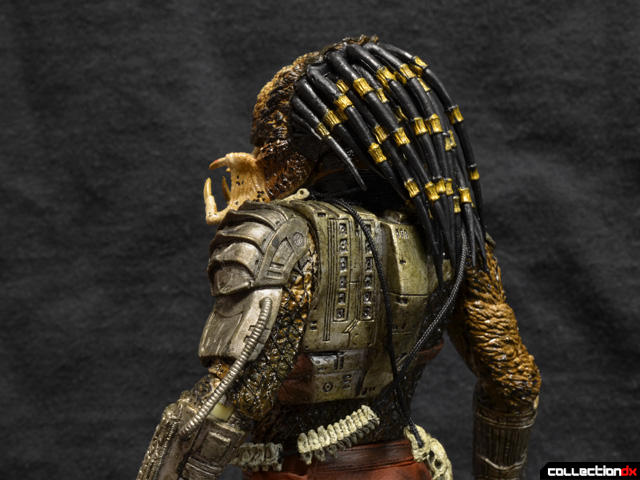 The sculpt features a bewildering level of detail and different textures.  The two bands of trophies across his torso and his bone necklace are held on with rugged black cord that feels like it was slightly painted so that it would hold its shape draped across the Pred's chest.  The dreadlocks are made from soft PVC and can be splayed across the shoulders in a very convincing manner. 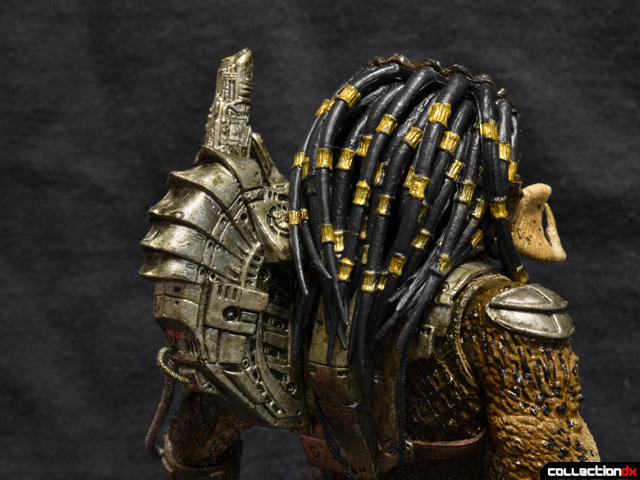 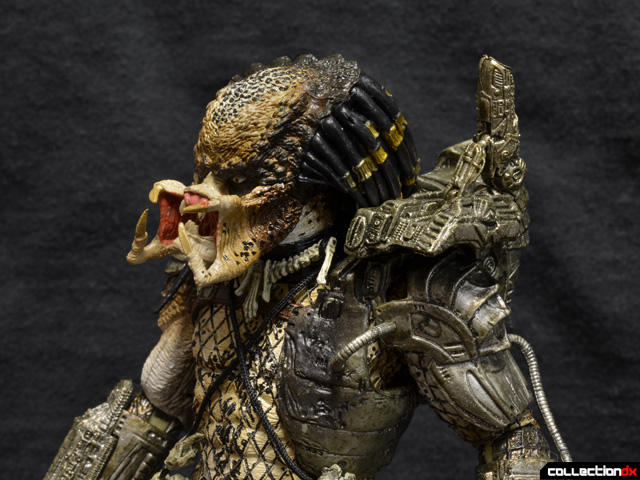 The plasma caster attaches firmly with two clips and is made from solid  PVC with sharp detail.  The gun is articulated at its base with a hinge and where the gun attaches to the post with a ball joint.  The parts are small but feel plenty durable and hold poses well. 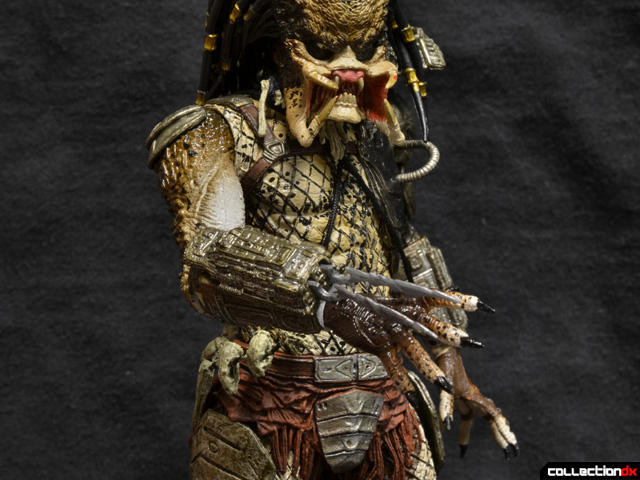 Jungle Predator also features the other iconic Predator weapon, the dual wrist blades.  The blades are made from hard PVC and have a little spring to them.  They are also wicked sharp for plastic parts. 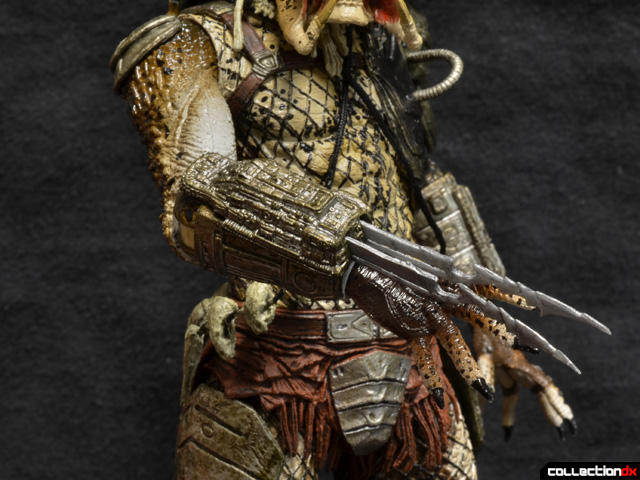 The blades extend smoothly and are connected on the inside so they deploy at the same length. 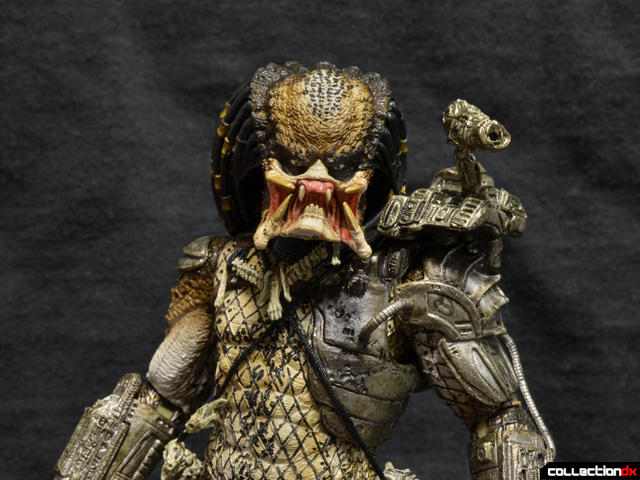 All geared up, Jungle Hunter Predator looks phenomenal.  The hoses and shoulder armor are soft PVC so they flex and move with the figure rather than hindering articulation.  There are all sorts of washes and stains and scuffs on the armor that make it look lived in, and the whole package makes for such an imposing figure.  I have always preferred the more heavily armored look of the original Predator to some of the later, lean Preds. 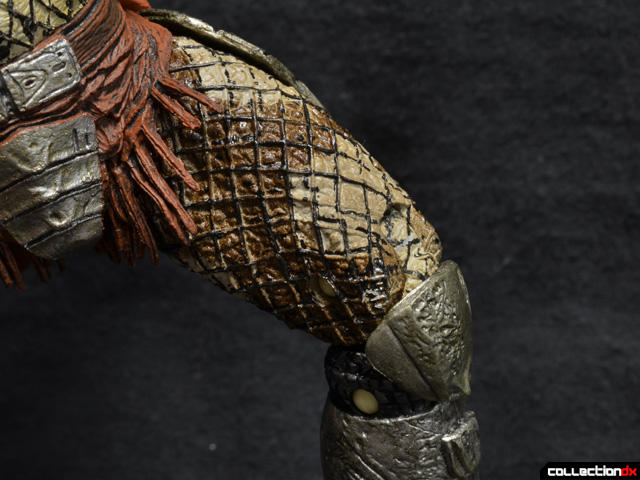 The paint and detail even extend to the knee articulation.  The sculpted and painted netting are present on the inner joint part, so that when the knee is bent there is still netting pattern visible.  Very cool. 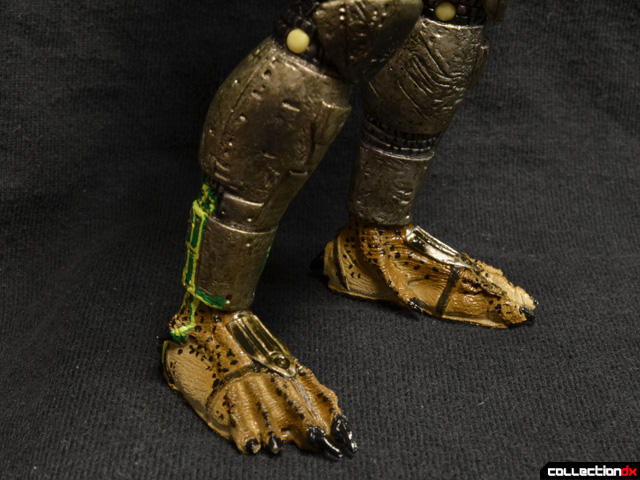 One odd thing I noticed, and my only complaint with my Jungle Predator, is that the finish of the feet do not quite match up to how nice the rest of the figure is.  The painting on the sandals and straps is not as sharp as elsewhere on the figure, and it appears the tips of some of the toenails were either not molded correctly or accidentally trimmed by something in the factory.  A couple dots of black Sharpie marker covered the scars on the toes, but it was odd nonetheless. 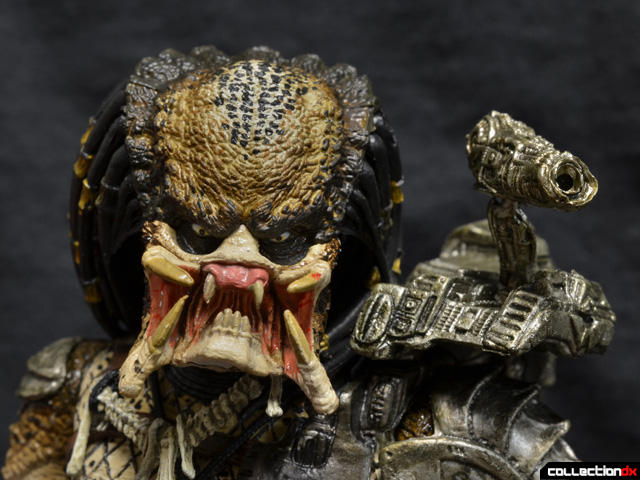 The big draw of the unmasked version is, obviously, the angry helmetless headsculpt.  The detail here is incredible for a seven inch, under twenty dollar figure.  The skin is fully painted with all the colors, spots, and details seen in the film.  There is one little stray red dot on one of the mandibles, but otherwise the paint is very clean.  The eyes are especially impressive for being so sharp and convincingly sunken in. 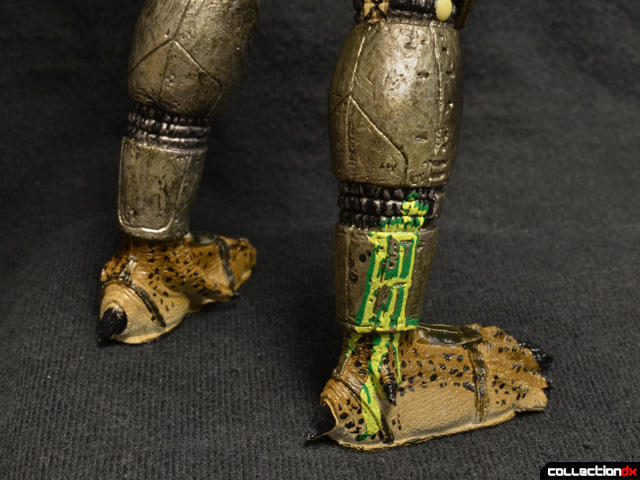 The jungle hunter Predator does not take his helmet off until late in the film after he's killed all of Dutch's team, so NECA has made sure to include the small wound that the Predator receives while brutally murdering all of Dutch's friends one by one.  The bioluminescent green blood is done here with two tones of bright green for a little depth and looks fine. 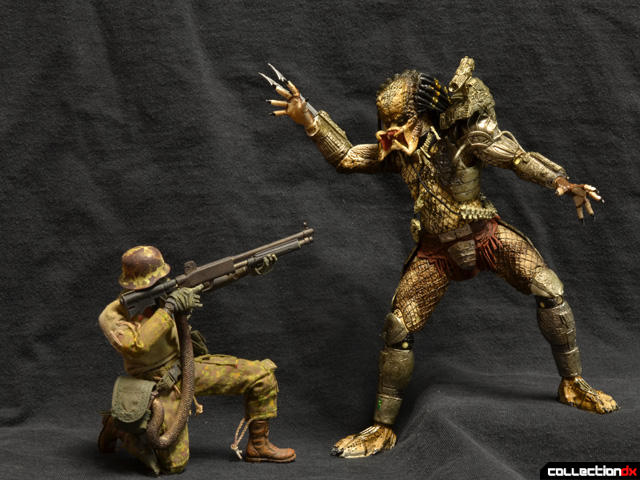 Predators are meant to hunt, and NECA's Classic Predator looks great terrorizing some six-inch scale figures.  In a battle of jungle hunters, my money is on the Predator over Jung de Plume.  NECA has a Dutch figure in the works that I cannot wait to add to my collection. 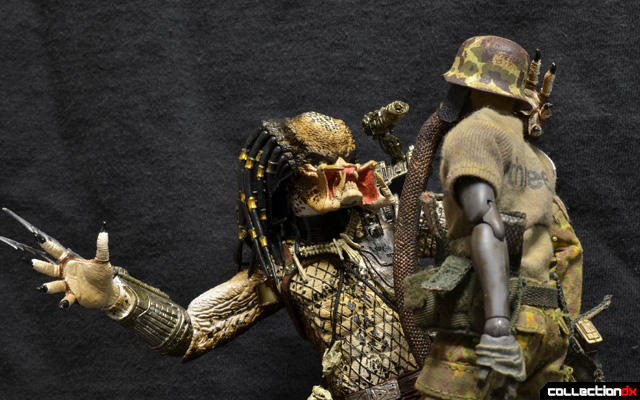 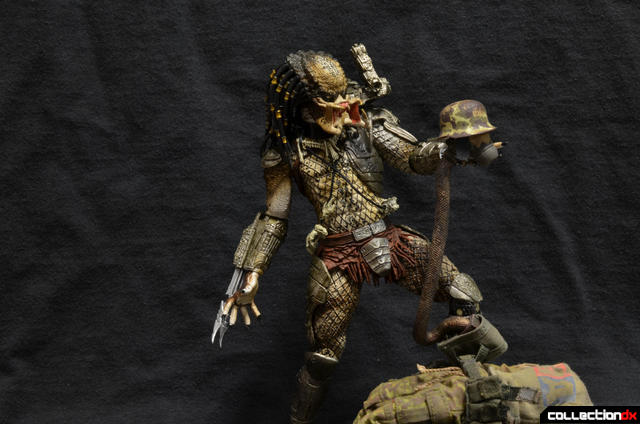 Predator wins!  I cannot stress enough how fun and satisfying this figure is.  It has the detail of a small fixed pose statue, but is fully articulated and very well made.  The battle damaged Jungle Hunger Predator and battle damaged City Hunter Predator two-pack is still available from Toys'R'Us on their website and in stores.  I will post a review of the City Hunter and more Predators soon, but I will tell you now that for $30 the set is fantastic.

4 comments posted
I Think NECA has made a lot

I Think NECA has made a lot of strides, but it blows my mind when I see things like this. 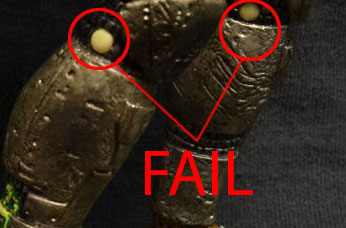 You spend all that time on the sculpt, on the paint, getting each and every thing JUST RIGHT, and you drop the ball on something like this. It's not just NECA, it's a LOT of US companies that do this, and I just don't get it.

Ha, yeah, they do stand out a bit. I didn't even think to point it out because almost nobody manages to mask them well. They could have been molded in a dark color and not painted and would have blended in to the lower leg color much better. Probably could just go over them with one of those furniture touch-up colored Sharpies and make them much less visible.

Went out a bought a Big Red predator right after reading your review. It's freaking awesome, definitely want Dutch and the original now, too.

Hey, thanks! I managed to find a Big Red yesterday as well... he's pretty slick!