I bit the bullet this summer and did something I promised myself I would not do. I bought my first Star Wars vehicle, The Legacy Collection Millennium Falcon. I have been trying to stay away from Star Wars because of the overwhelming amount of cool stuff that is out. I knew once I started, I could be hooked. I must confess, I am a total toy druggie and the easy access of Stars Wars goods at local stores is just so tempting. I actually thought that I came away from my purchase of the MF without a screaming habit, I was wrong!

Scene cuts to last week...I'm out with my wife killing time at a local Wal-Mart. Knowing that I have a problem, like a fool I decided to check out the toy aisle. At first, I was not impressed, the usual generic fair of Americanized crap we give our kids for X-mas and birthdays. I was starting to think that I was OK and that my toy addiction was under control. I was sadly mistaken! I looked up and I saw the corner of a box just barely visible on the top shelve. All that I could make out was Star Wars and Legacy. Being that I loved The Legacy Collection MF, I just had to investigate.

Today I will be reviewing my findings: Star Wars A-Wing fighter with Green Leader Arvel Crynyd pilot figure. You may or may not remember Arvel Crynyd. If not, in ROTJ he was the guy that crashed into the bridge of the Super Star Destroyer Executor, resulting in the Executor crashing out of control into the second Death Star. Enough of the back story, on to the toy!

The toy is packed in a window box that looks very much like the packaging for the new Clone Wars toys. Note that this toy is a Wal-Mart exclusive.

The first thing I noticed about the A-wing is the detail of the paint job. I really like the shading and feel it adds to the realism of the toy. The toy is made of sturdy plastic and felt really light, but I'll get back to that later. 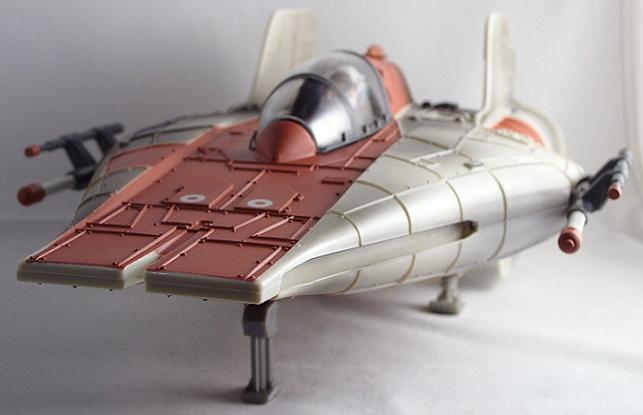 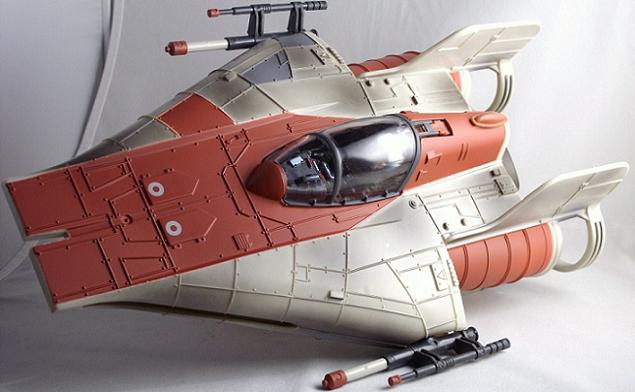 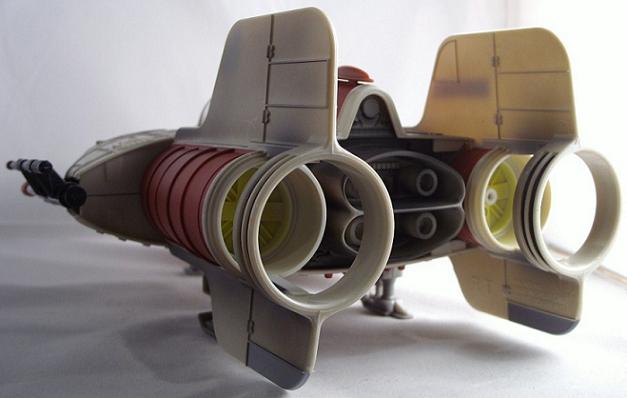 Some of the features of this toy are, a highly detailed opening cockpit, movable side cannons and retractable landing gear. 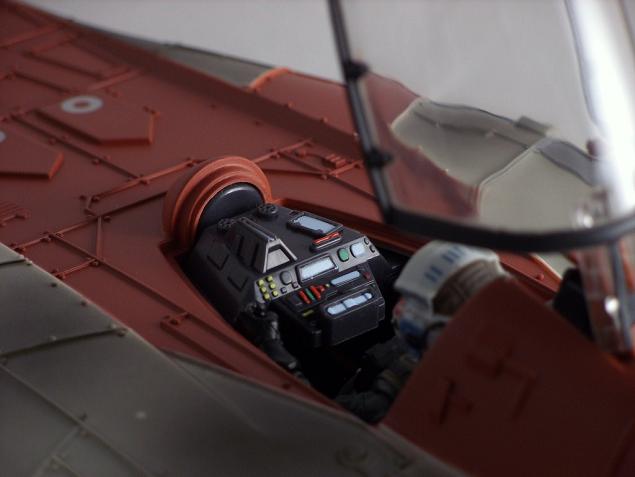 Cockpit canopy automatically opens when you slide back the lever located just behind the canopy on the fuselage. 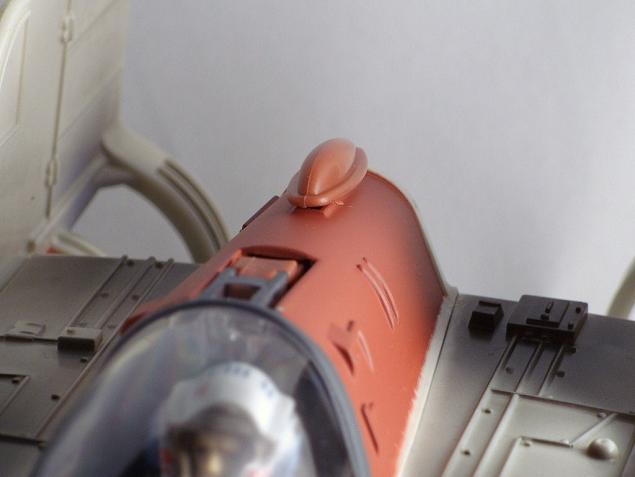 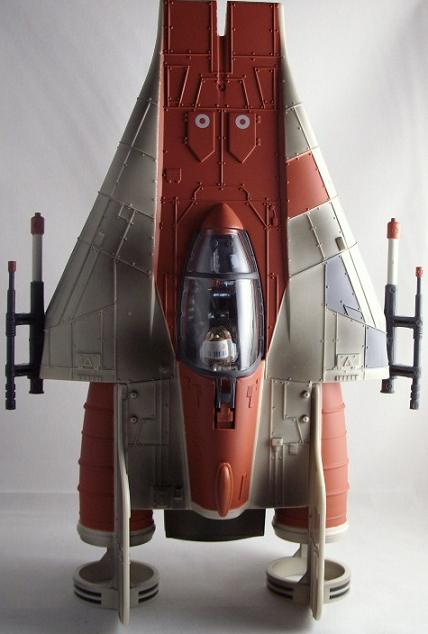 The landing gear is manipulated using the gray lever near the rear left landing gear. Notice the cover next to the lever. It sorta looks like a battery cover, huh? My theory is that the original design of this ship may have included electronics. This may explain the lack of heft I mentioned earlier. 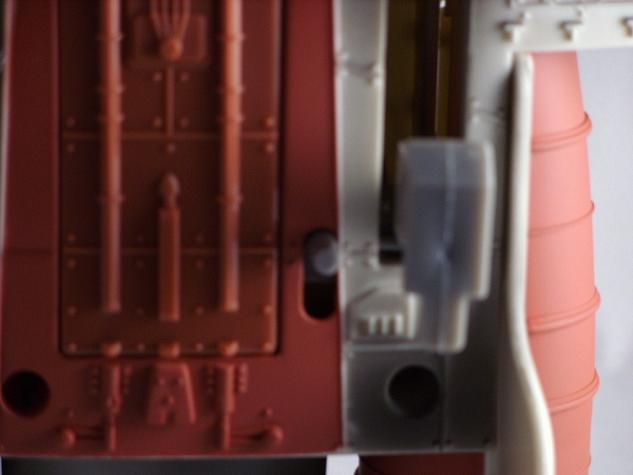 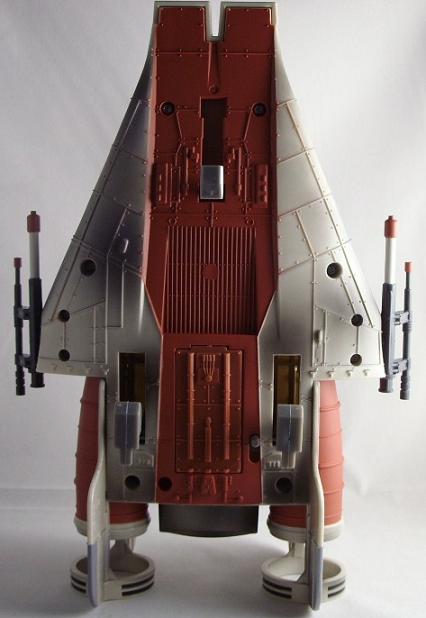 Let's move on to the pilot figure Arvel Crynyd. The pilot is highly articulated and very detailed. In my opinion, the figure really complements the realism of the A-wing. My only gripe about the pilot is..... why no gun Hasbro? I mean how hard would it have been to include a gun for the guy. 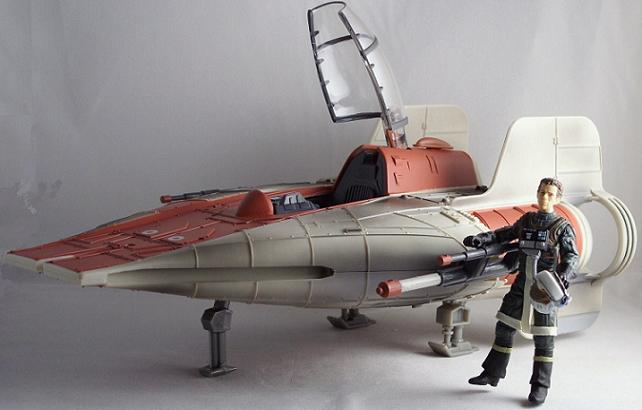 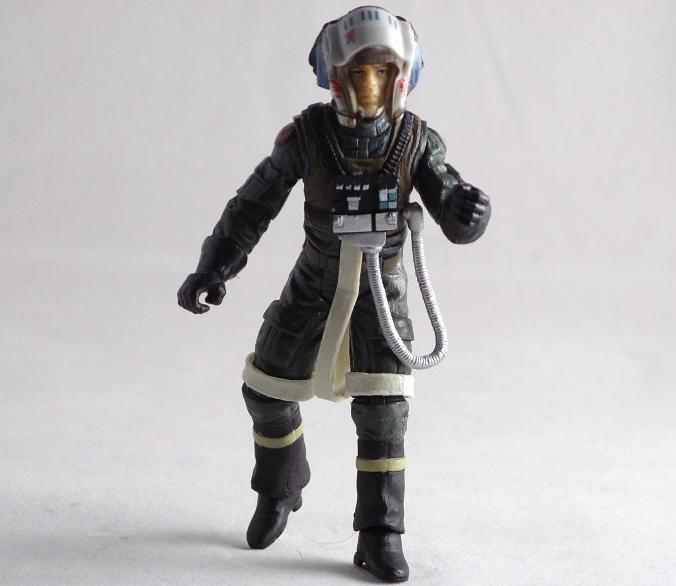 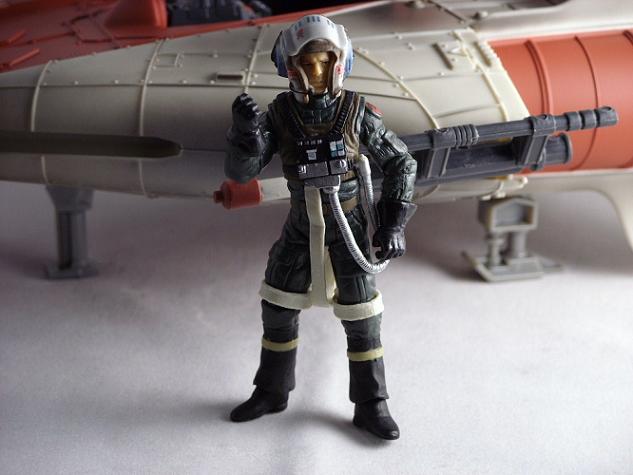 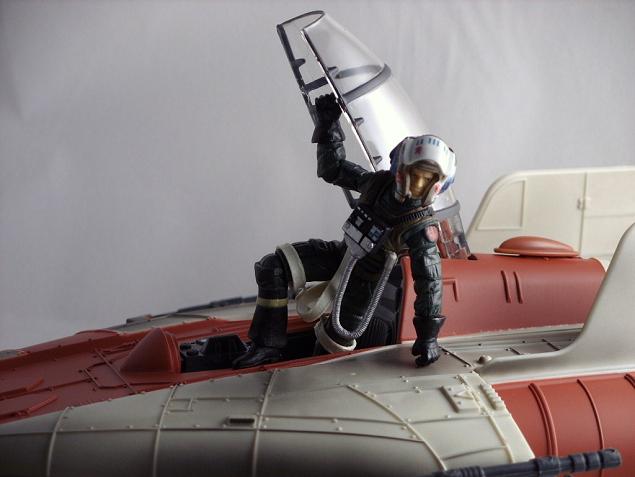 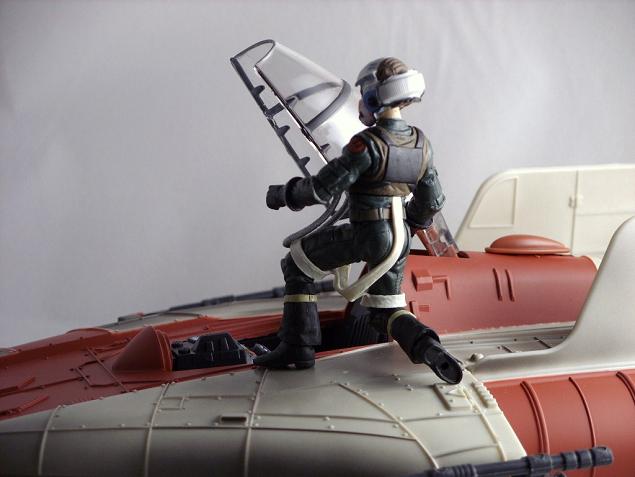 In conclusion, I really like this toy. However, I really would have enjoyed it more if it had some electronics for added play value. Oh, and let's not forget a gun for the pilot.

12 comments posted
Thanks to your review, I now

Thanks to your review, I now know that A-Wing pilots wear fireman pants.

The cover: Well, duh. That's so they can rebox it next year as the "SPECIAL EDITION" A-Wing, which does have light and sound effects.

I'm sure that someone used to doing light-up model kits could work with this pretty easily, though, and that hatch would be a very convenient place for batteries. They certainly didn't go to any great lengths to conceal the screws!

A friend of mine back in the 80's had an X-wing and a Y-wing, and his dad had modified both of them to have lights; I was tremendously jealous.

I've got an a-wing that was released like 10 years ago perhaps.
And it has that hatch on the bottom as well that doesn't open. Plus the whole a-wing looks identical to this one, only with a different pilot...

I received the original A-Wing fighter as a Christmas gift way back in the mid-80s. Don't ask me which year. It's in a box along with the rest of my original collection at Mom's house.

Anyway, you are correct in that the compartment on the bottom was for batteries. The original A-Wing had "sound effects." See that odd "third" hole in the bottom near the tail? That's about where the button was to activate the "sound effects," which amounted to a buzzing noise. Still, it was something.

Those extra batteries and electronics didn't add much heft to the thing. The A-Wing has always been light.

I picked up the new one last week, mostly for the figure. Still have enough room on the ceiling for one more small fighter. :-)

I knew it! I wish they didn't leave the electronics out of it. All I can think is that maybe they had to meet some price point. Sounds like you suffer from the same Star Wars drug habit I recently picked up. I have 11 ships to make room for on the ceiling of my office. 4 are up including the MF and its starting to get crowded looking. I have a question for you. Is the original A-wing fighter with electronics from the short lived cartoon Droids?

Honestly, I can't remember. I do remember having some of the "Droids" action figures, and one or two of the Mini-Rigs from that line, but I can't recall if the A-Wing came in "Droids" packaging or standard Star Wars/ROTJ. It was one of the last Star Wars toys I got, so it must have been from the Droids line, since I remember that (and "Ewoks") taking over the Kenner line the last couple years.

Threw away the packaging the day after Christmas back in those days, so hard to tell.

There was a light bulb in the nose, and when you pushed a button it lit up. FUN-O.

Dude, we are discussing the A-wing, not the X-wing, save this sarcastic comment for the X-wing review.

I'm still kicking myself that I let that thing get away from me. In fact, there were lots of toys from back then that I remember mistreating, abusing, losing the parts, finally just consigning it to the junk bin; I want to go back in time and be all "YOU IDIOT, THAT'S AN ORIGINAL KENNER MILLENNIUM FALCON! YOU DON'T HIT IT WITH A ROCK!"

I used to have this problem too, with the Star Wars vehicles, but I decided I had to pare down my collecting and gave them all to my nephew (I only had about 5). But sometimes I still miss them and find myself in the WalMart aisle looking at them.

Should this toy be classified as "Hasbro X WalMart X Lucasfilm"? ;)

These days, we can do better than just a tiny little blinking LED on the front. We can have sequences, sound clips, variable-intensity; all sorts of fun things.