Toy World is another relative newcomer to the third party Transformer scene. They have had a strong start, debuting with a line of figures based on the often-overlooked Generation 1 Throttlebots. The Throttlebots were Transformers with pullback motors and hardly any transformation to lousy robot modes, but Toy World's are better!

For details on the transformation, be sure to check out my HD video review! 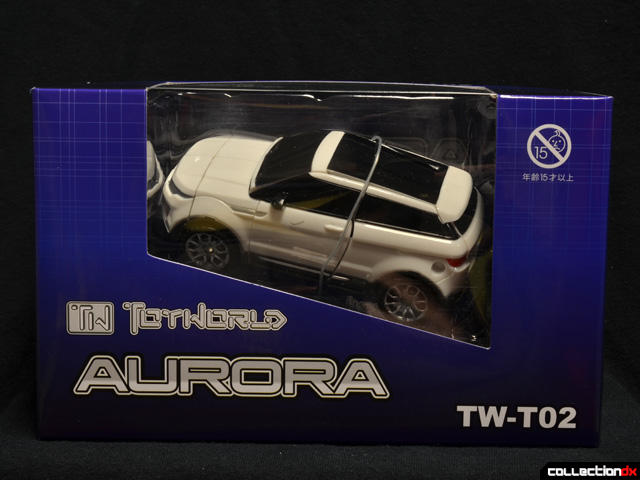 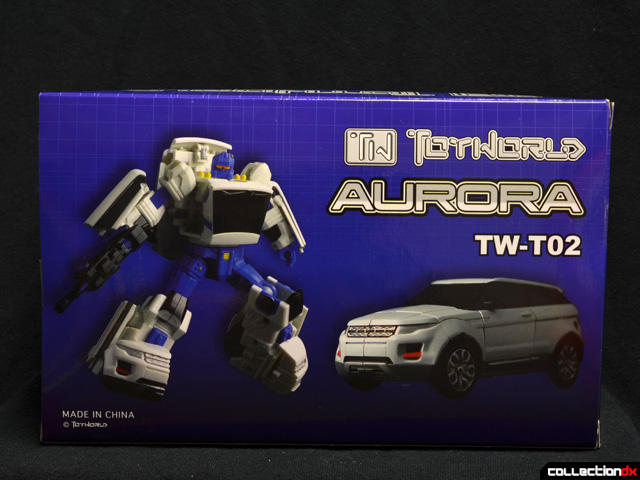 TW-T02 Aurora is the second release in Toy World's not-Throttlebots line, based on the Generation 1 Autobot Searchlight. Aurora comes displayed in vehicle mode, and I still dig that slanted window and vacuum tray effect. 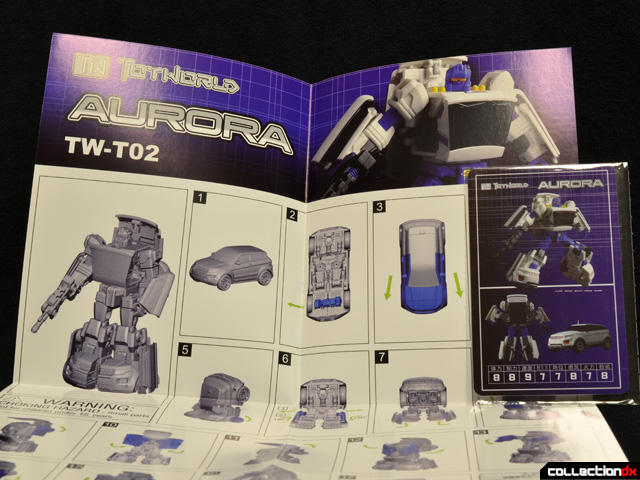 All the necessary paperwork is present. Aurora includes another statcard for the collection. 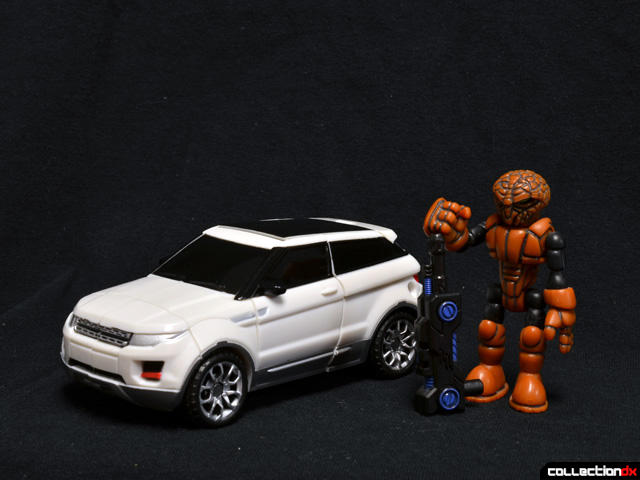 Aurora's vehicle mode is a cute little unlicensed Land Rover Evoque, comparable in size to a smallish Deluxe class Transformer. The only included accessory is a hefty looking gun. 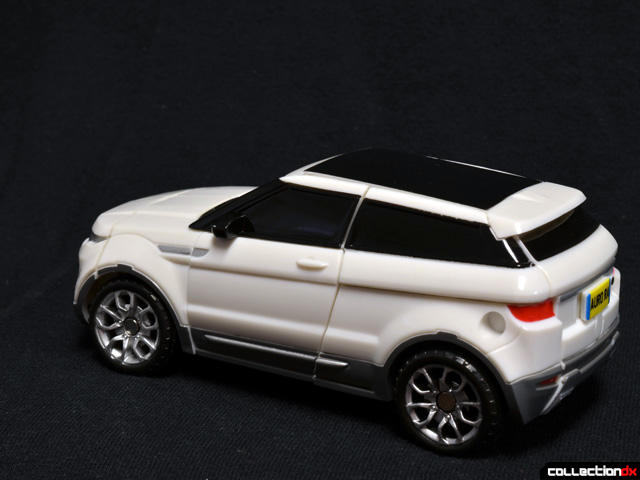 The Evoque is a cute little SUV with neat lines, and Aurora captures that look well. The white plastic is high quality and not translucent at all, so even though the white is not painted it looks quite nice. All of the car mode details are sharply painted and effective. 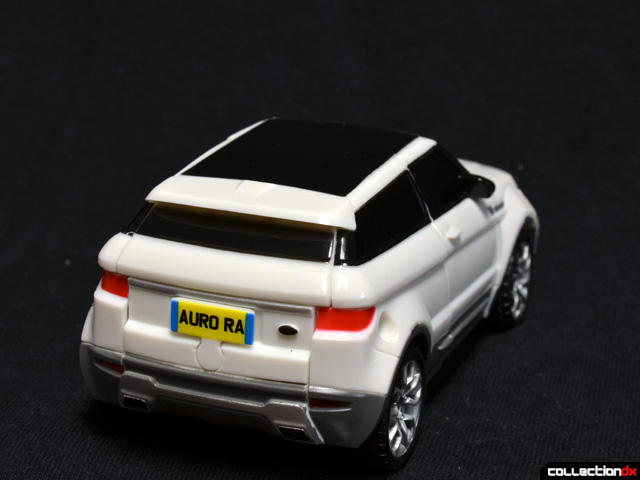 Aurora even has a printed license plate. Everything locks together well, making Aurora a solid little toy car with all four wheels always touching the ground. 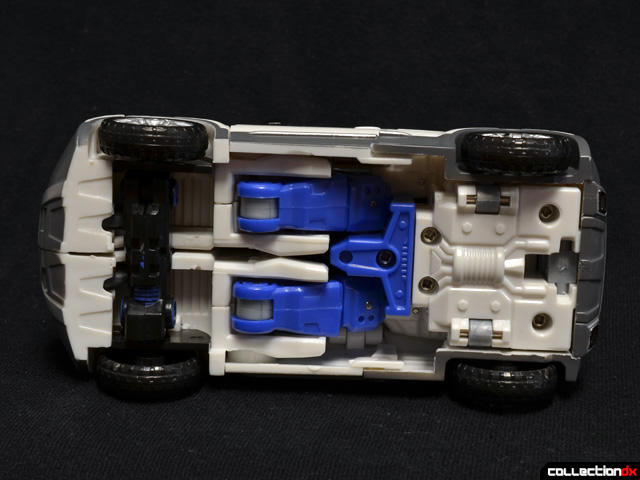 The underside is not bad, but not quite as nice as Grind Rod's. The gun folds in half and fits in between the front wheels as an engine. I wish the muffler detail was painted. 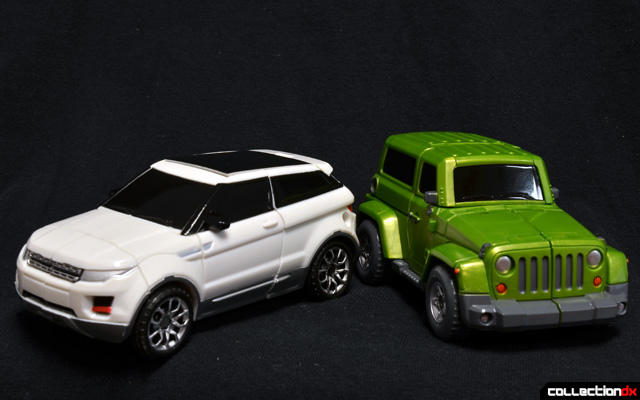 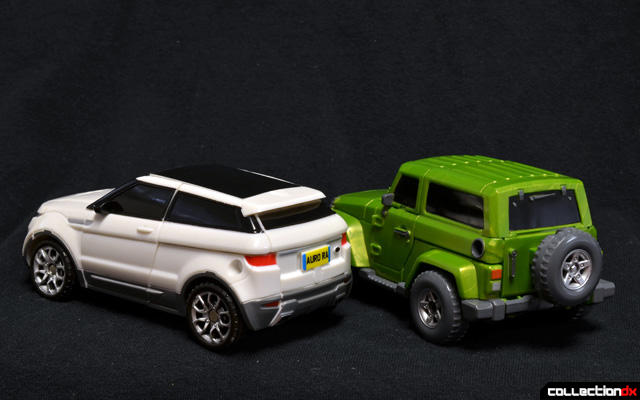 Thankfully, my biggest complaint about Grind Rod has been fixed for Aurora. The tires are now black! 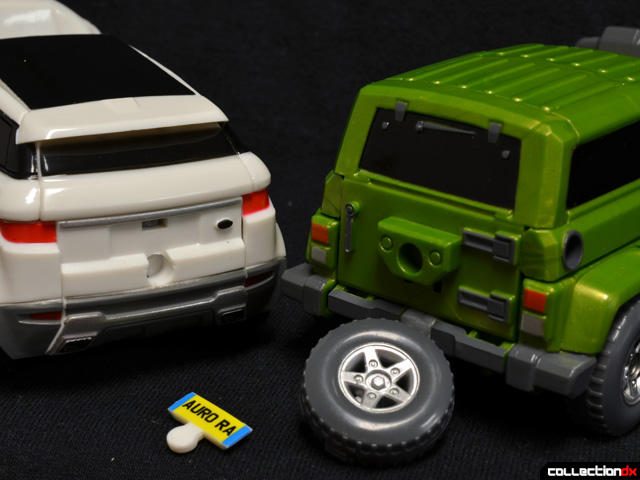 Continuing the theme that Toy World might be building towards a combiner, Aurora's license plate is removable, revealing a 5mm port in about the same spot as there Grind Rod's spare tire gun attaches. 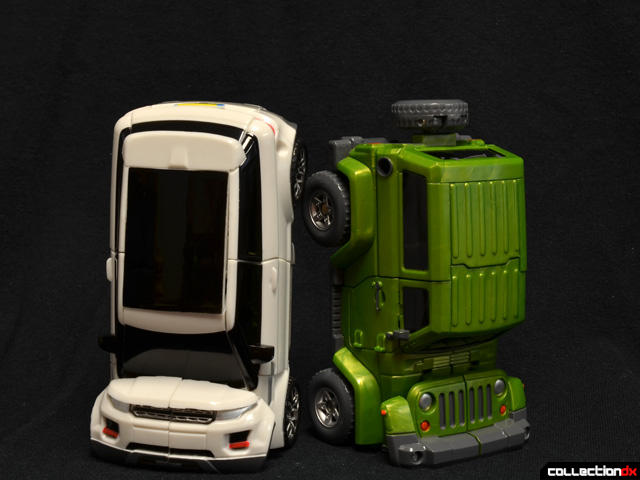 Aurora can assume the same mode as Grind Rod, thought to form the lower legs and feet of the gestalt. We'll see. 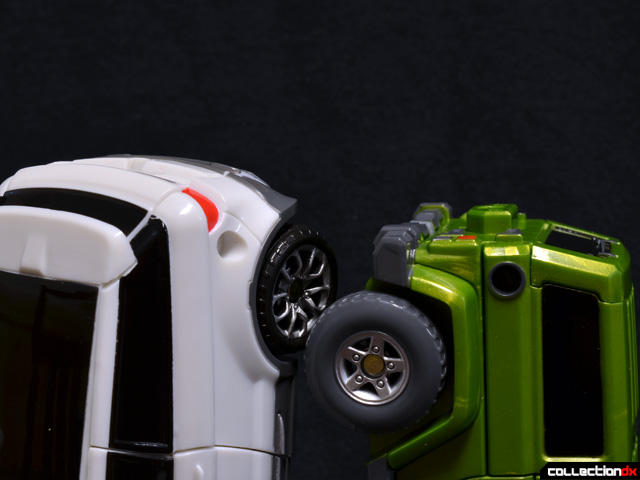 Aurora also has the same side peg holes as Grind Rod, so maybe those will play a role. 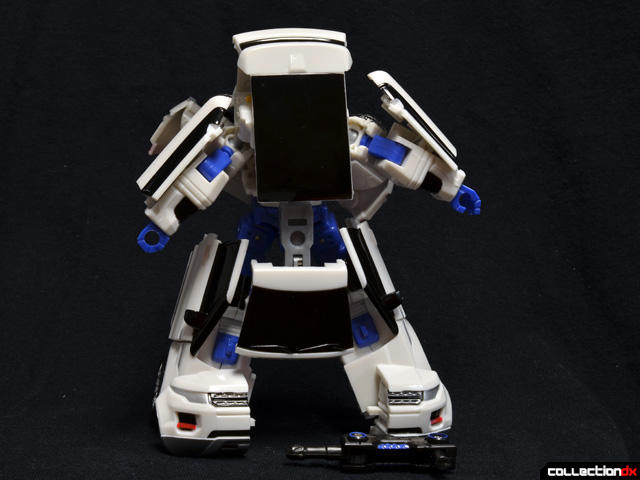 Aurora transforms almost exactly the same way as Grind Rod, since he is in reality almost the exact same toy as Grind Rod. 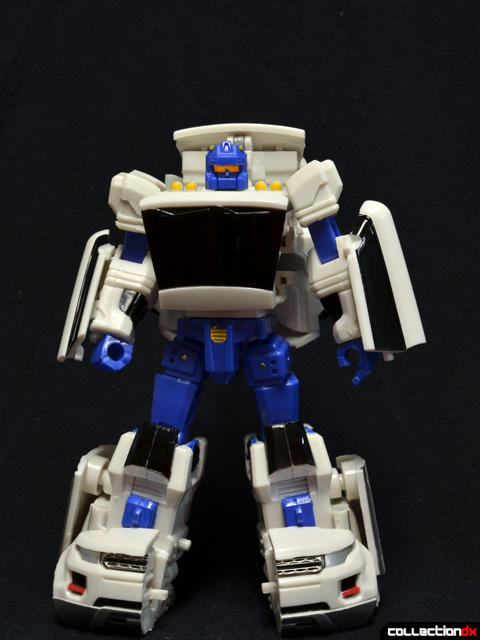 Transformed, Aurora stands about five inches tall. The transformation follows the same pattern as Grind Rod, but there are a few differences that help differentiate Aurora, especially in the legs. 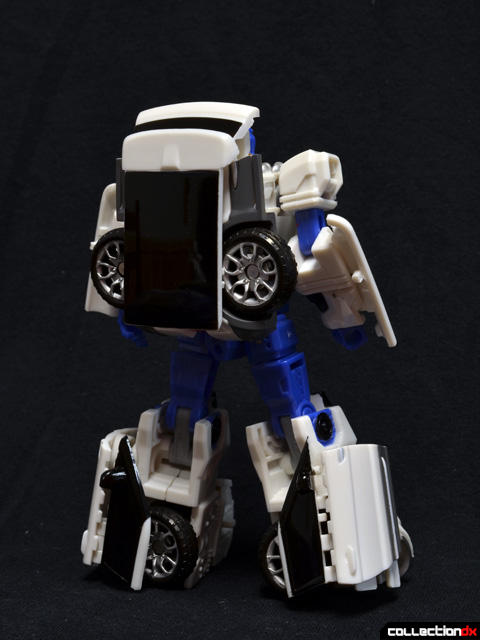 From the rear, the additional folding leg panels are more obvious. Also new for Aurora is that the wheels on the legs fold back, adding a little more heel stability. 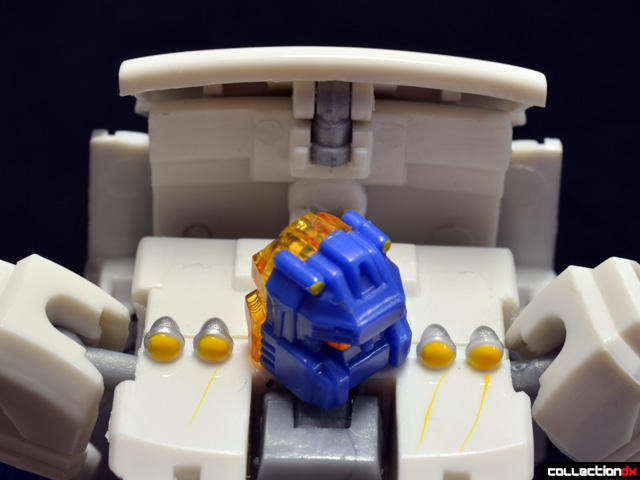 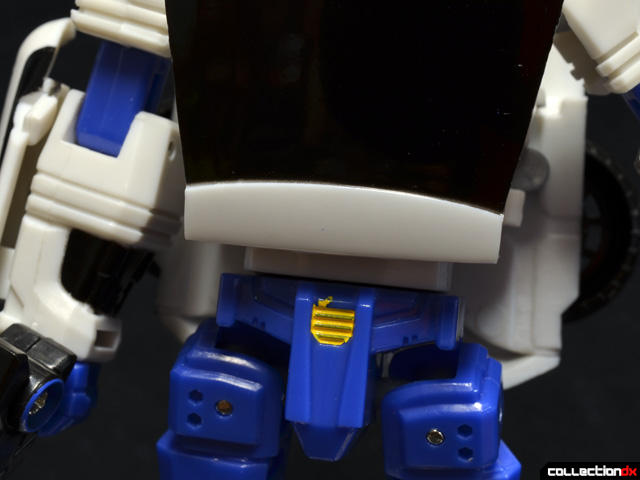 My Aurora has a couple of minor paint issues. There are some streaks on the shoulder lights as if the paint mask had a little paint on it and was dragged along the surface. There is also a little stray paint on the crotch lens. A quick scrape of an X-acto blade should take these off, but it is a bit surprising considering the quality on Grind Rod. 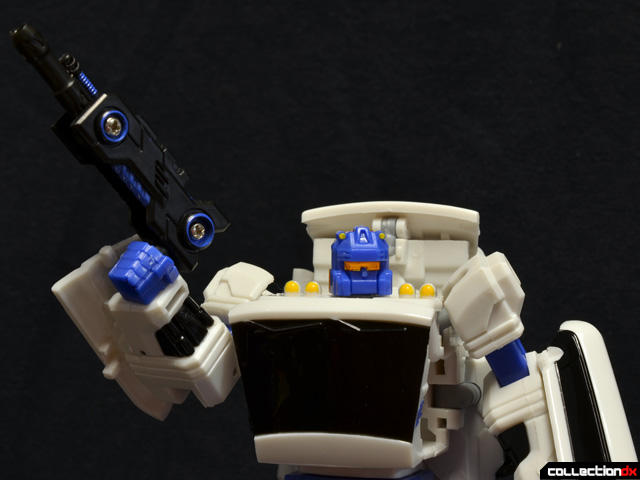 Other than a couple stray yellow spots, the quality on Aurora is fantastic. The plastic is all nice and heavy feeling, and the joints are perfectly tight. 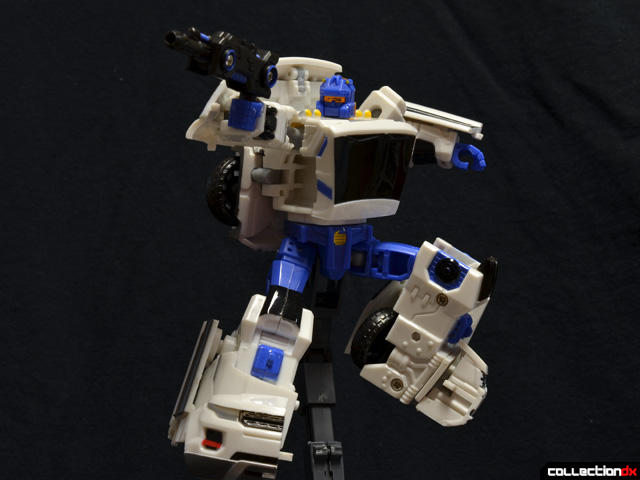 Aurora has a nice chunky style about him and looks great whipping his big hand cannon about. He has plenty of motion for such a blocky figure. 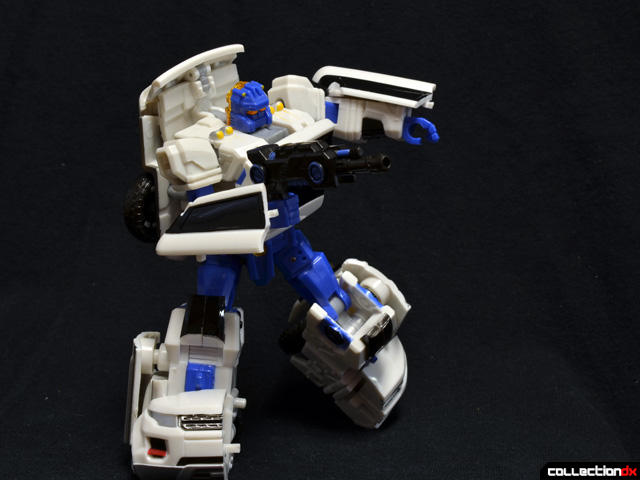 The toes are posable, allowing Aurora to squarely plant his feet in dynamic stances. Running and striding poses are nice and stable now. 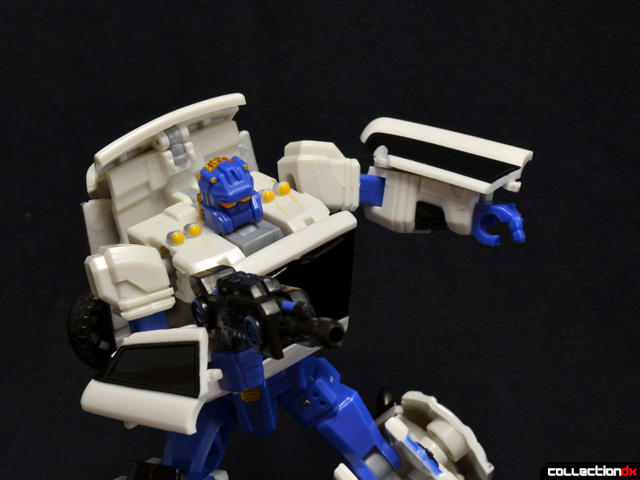 I cannot stress enough how much I appreciate Toy World giving Grind Rod and Aurora two different hand sculpts, so the hand without a gun looks open and more detailed. It's such a minor detail that adds a lot of life to the figure. 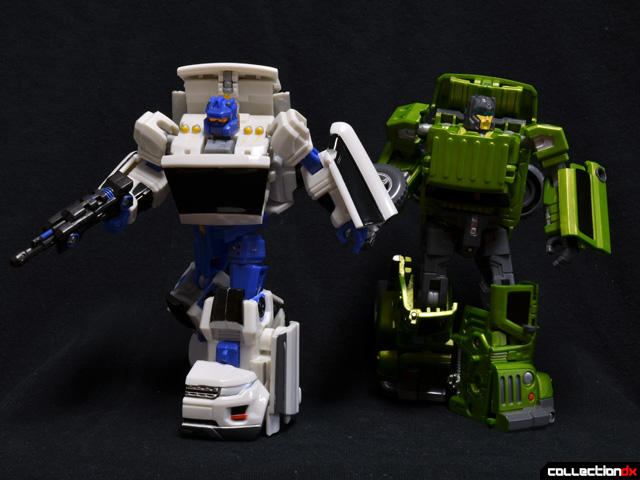 Together, Aurora and Grind Rod are two incredible little blocky bots. The two figures are mechanically almost identical, but manage to stand out as two distinct toys thanks to a few minor tweaks and a strong design sense. 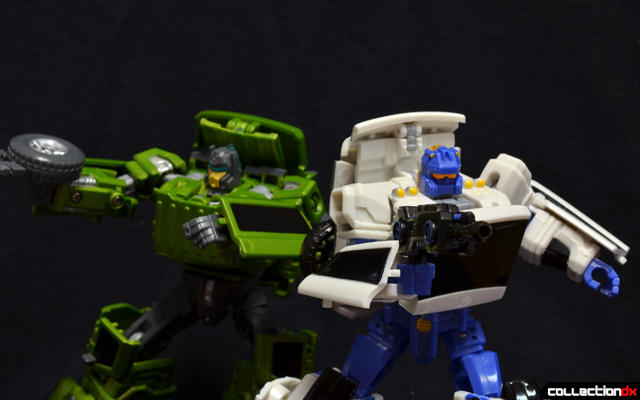 Toy World has made two beautiful little figures that are fun to play with. That's all that really matters. If the combiner thing pans out, that'll be cool, but I am completely happy with these guys as is. Toy World recently showed off the next figure in the line, based on the Throttlebot Chase, and he looks incredible. I've already got Trace preordered and expect him to be similarly fantastic. 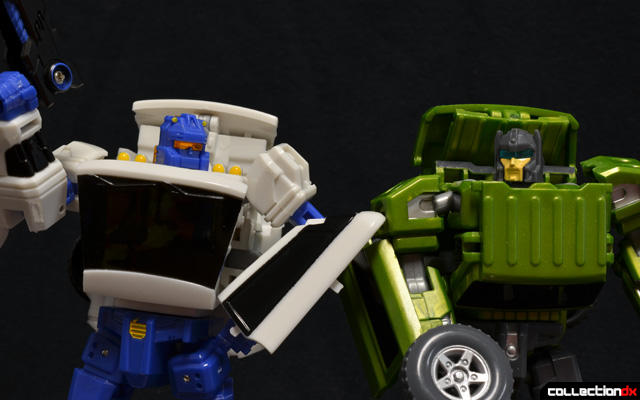 Toy World's TW-T02 Aurora is available for many fine retailers for around $70. I was a bit harsh about the price in my Grind Rod review, but I've actually cooled off about that a bit now that I've messed around with Aurora. I think there's a real genius to these figures with their satisfying transformations and straightforward designs that makes them excellent no-frills figures. There's no overly complex bits to worry about or delicate parts to lose. Aurora and Grind Rod are solid toys straight up and down and worth checking out.

5 comments posted
A combiner with a limp?

Your photos make it appear as if a combiner built on Grind Rod and Aurora would have one leg longer than the other. Is that right, or is it just the angle of the shots? Not to say that the attaching parts couldn't be different lengths, but how strange would that be? And it's it still the case that a combined mode is only a rumor, anyhow?

You are correct... unless there is more to the leg transformation, the peg holes are not at the same height. It's hard to say at this point how any of this combining is going to work.

Maybe it's a really elaborate version of those old Micromaster combiners like Six Turbo.

I get the impression that if there is a combined form, it will require quite a bit of parts-forming and the extra pieces will come with the final team member. This could mean additional thigh sections that compensate for the slight difference in leg lengths. The trouble is, the third member of this team has just been revealed (pics on BBTS) and he looks nothing like either the G1 Throttlebots or Grind Rod and Aurora at all.