The Arkham series of video games were pretty fun beat'emup games that I really enjoyed playing. Having the voice of Kevin Conroy and Mark Hamill return as Batman and Joker went a long way to hold my interest as well. There have been a whole BUNCH of action figures and toys and statues from these games, but this is the first one I've gotten. That being the ArtFX+ Arkham City Batman statue. 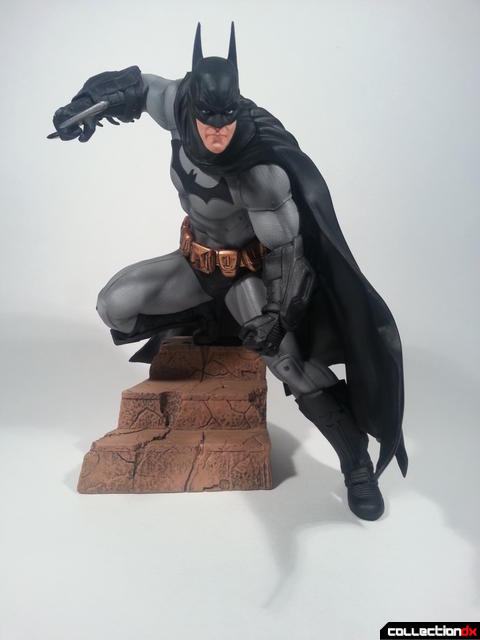 Based on his appearance in the Arkham City video game, this Batman is no weeny. He's a big muscled guy who will easily punch your head off. Despite that though, he's not so overly muscled to the point where it's distracting (Like it was sometimes in the actual video game!). 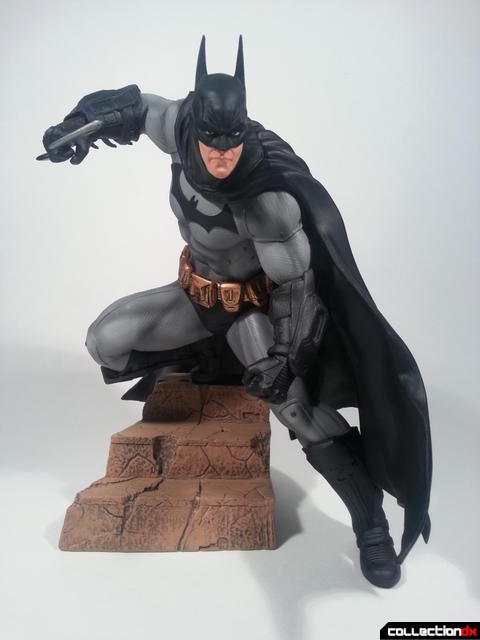 In a battle ready stance on a set of stairs, this Batman is ready to throw his batarang at any foes. 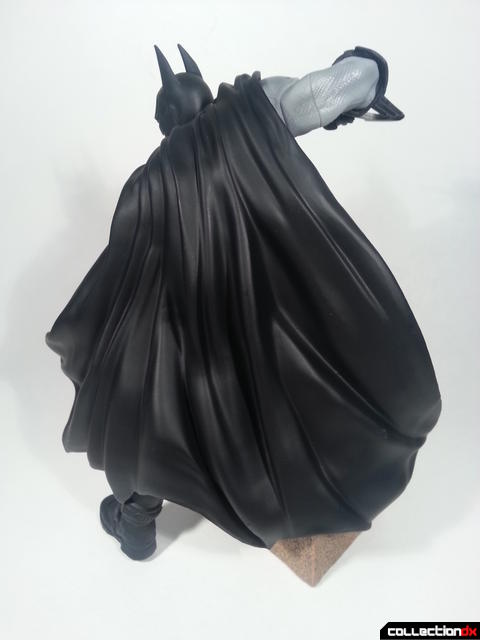 I really dig the dynamic pose on this figure. It captures the motion that the figure is in pretty well, and the cape really does feel like it's swooshing dramatically in the air. 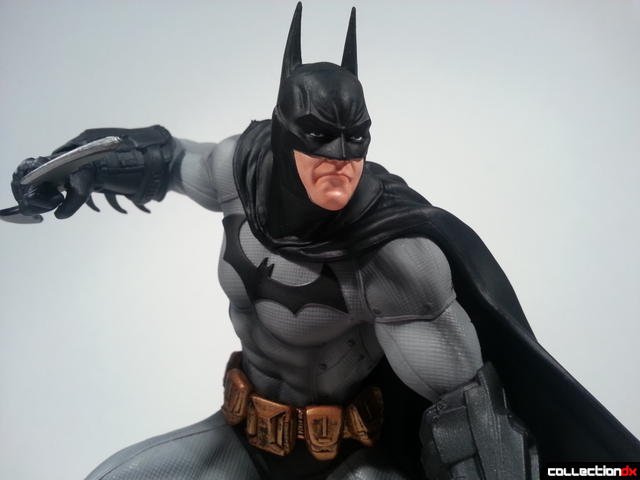 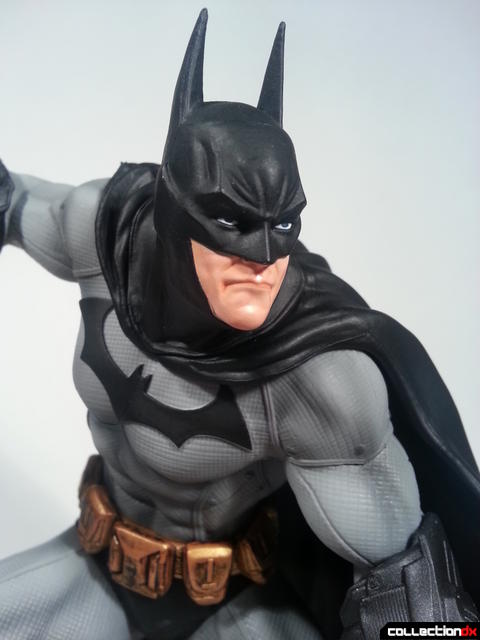 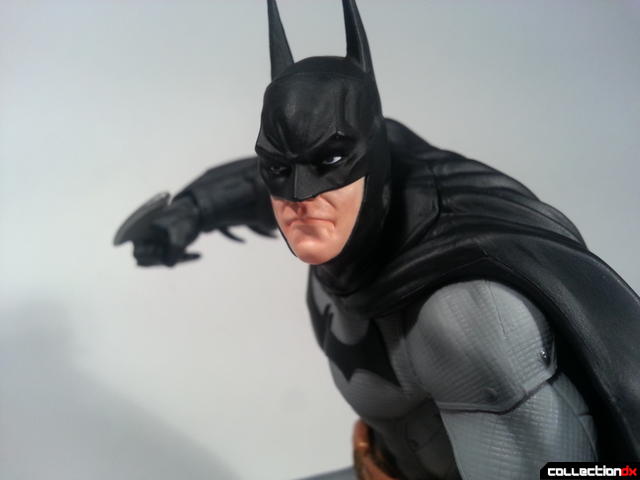 I find that Batman's face is one of those things that's often hard to get right in plastic. If you're not careful, his face may end up being too long, or he'll end up looking like he has fisheyes if you separate his eyes too much. That's not a problem here, and overall I think the face looks very good. It's grim, brooding, and has a hell of a powerful chin. 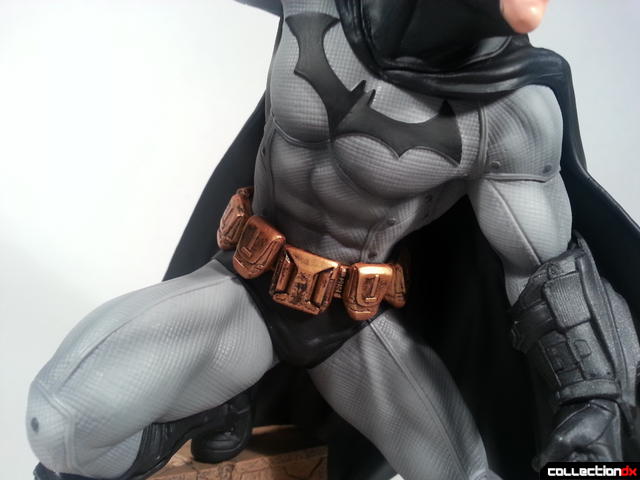 The texture on the actual suit is one of my favorite parts of this figure. The grid pattern on the woven armor is tightly sculpted around everyone of his ridiculous muscles in an awesomely well detailed manner. 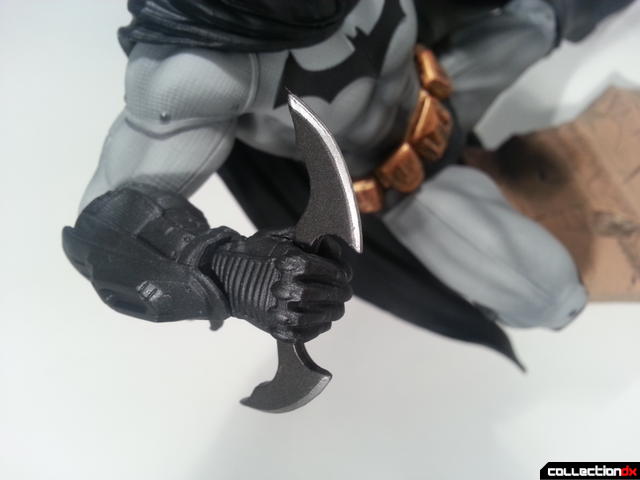 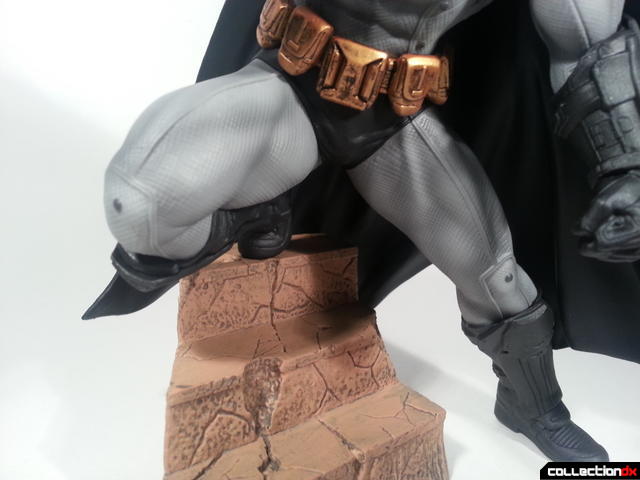 In his right had is a batarang, ready to go. This is actually a separately molded piece in his hands, so it can wiggle around a bit which I do like. It's also has a wrist swivel in case if you want to aim it in a different direction or what not. The only thing that I don't like about this is that he's holding it in the center, and not a real good position for actually throwing it. It still looks good, but I just would have preferred that personally. 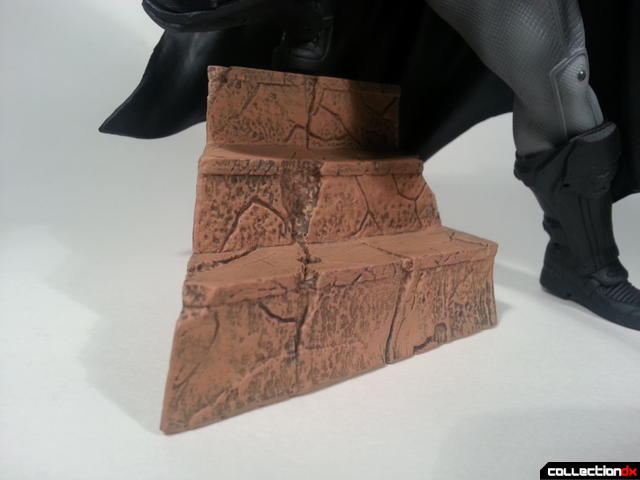 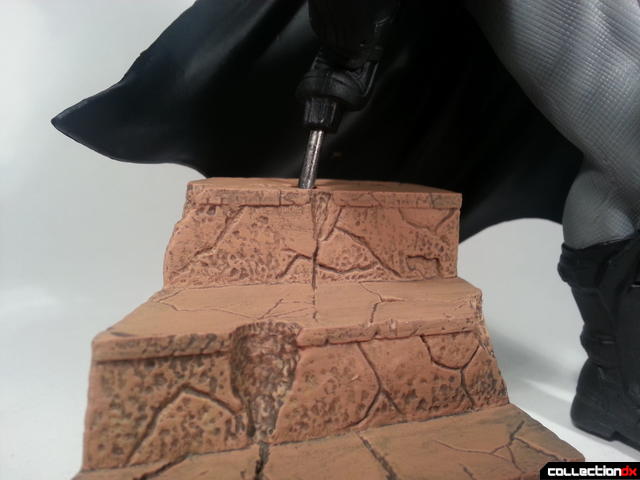 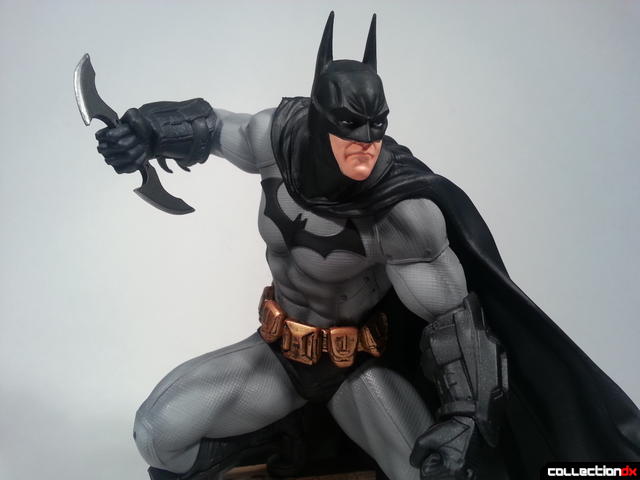 The Batman is actually a separate piece from the base, and it's done in a way I really like. Batman's foot has a metal peg that slips into the stand. It's super secure and steady. 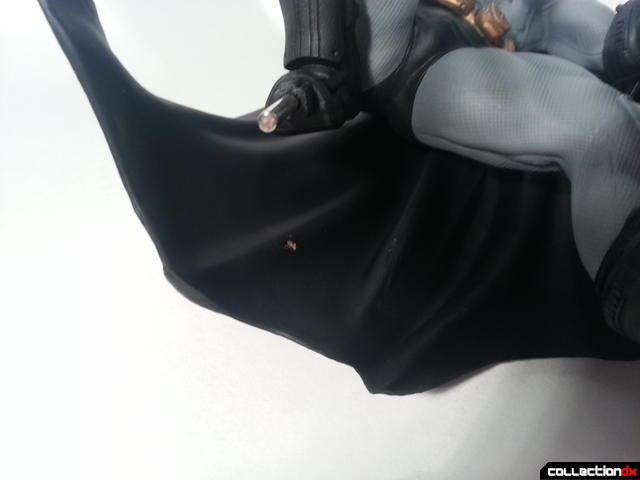 Upon removing the figure though, I did notice that some of the paint on the stand got onto the inside of Batman's cape. You can't actually see it though, so not a big problem at all. 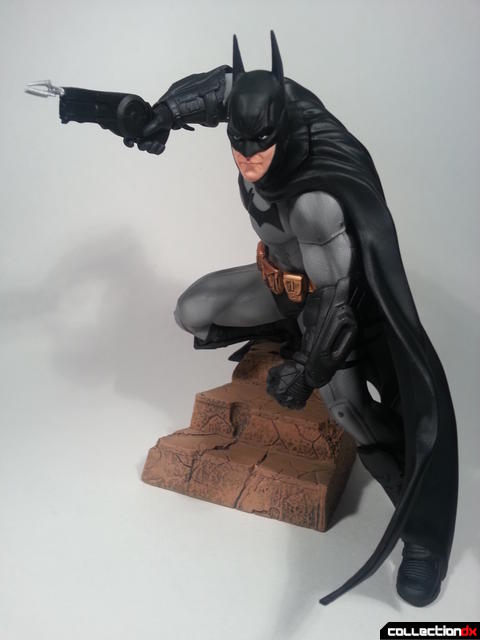 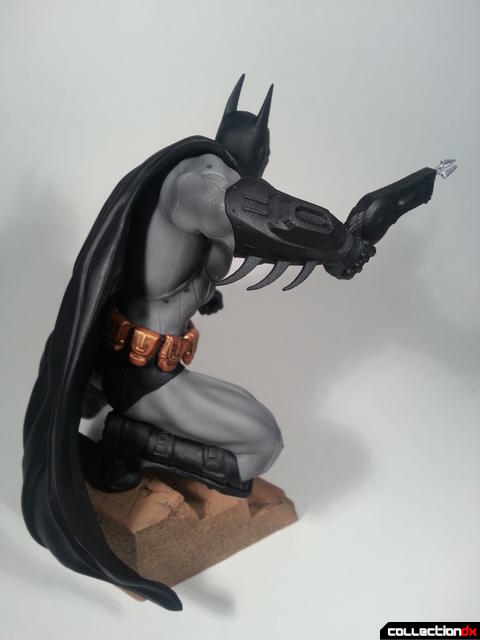 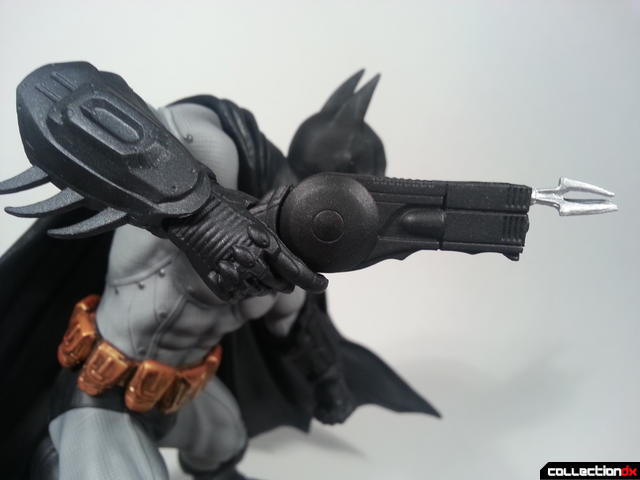 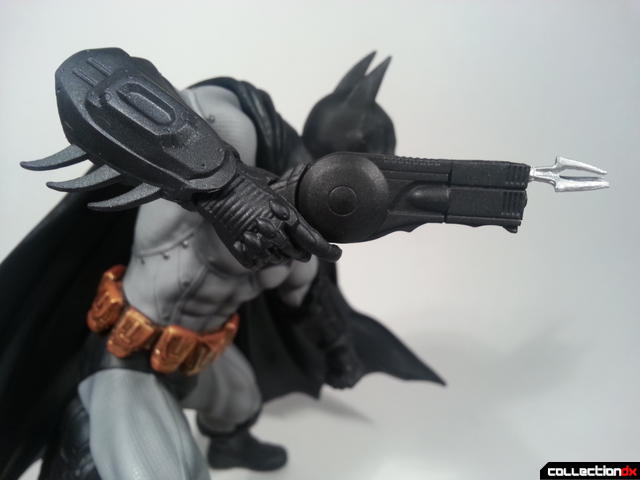 In addition to the batarang, Batman also includes an alternate hand that can be used to make him hold a grappling gun instead. I'm not sure how I feel about this. On one hand, it's a well sculpted and detailed alternate piece, but to me it doesn't seem to fit with the pose very well. If Batman was looking up or aiming his grappling gun elsewhere, maybe it'd work better. Still it's an extra option and a nice one for sure. 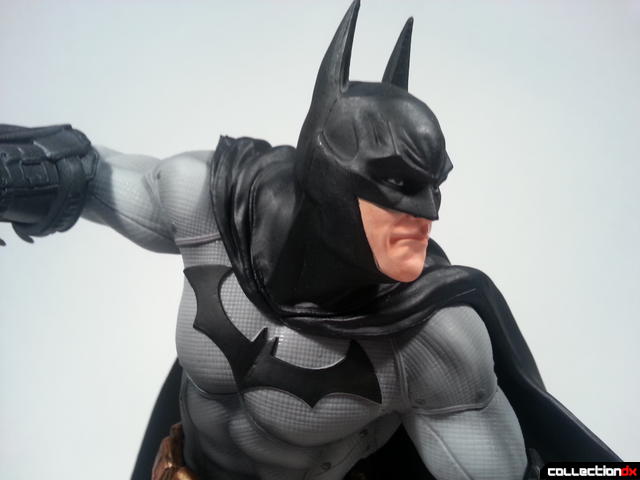 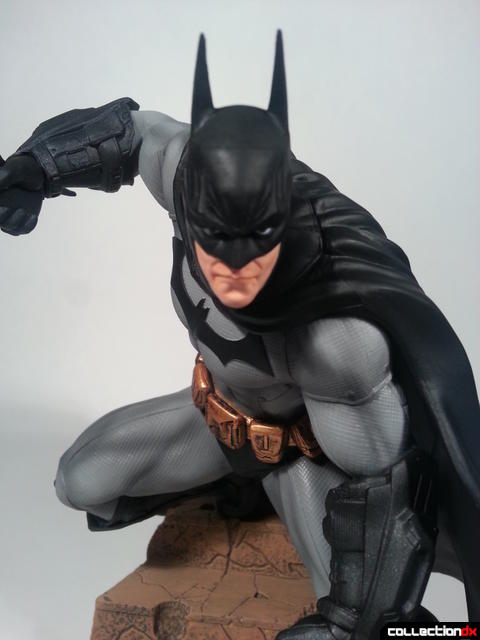 It goes without say that there's a lot of Batman toys and statues out there. But as far as designs from Arkham City goes, I think this is one of the most well done ones. A lot of other figures end up looking over muscled or have GIGANTIC necks. This one doesn't suffer from that, and if you are a fan of this design, you should definitely check it out.

Nice statue, but he looks a lot like Grumpy Cat in that fourth picture, and only that picture, for some reason. Must be the lighting/angle.