The latest oddity to arrive from Argentina is this unnamed robot. While it contains many of the features of something from the Machinder family, it's so strange in its design that most likely wouldn't group it with them. Nevertheless, once I saw it, I was pretty sure it would end up in my collection. It's just too bizarre not to. 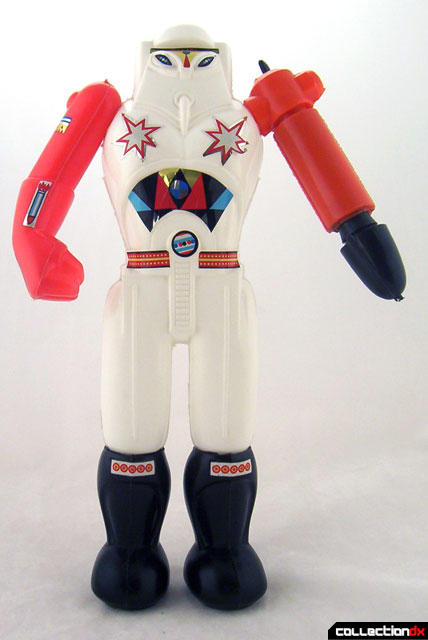 Besides it's completely foreign appearance, the first thing that jumps out at you is that it has a missile launcher for an arm and yes, that missile does indeed fire. And pretty well too, I might add. The mechanism by which it operates is quite simple. You simply push the missile into the arm until the end sticks out of the back and twist it to hold in place. When you want to fire it, twist it again and push it. Once it clears the plastic holding it back, away it goes. And like I said, the spring is actually pretty strong so it'll probably go about 10 feet. 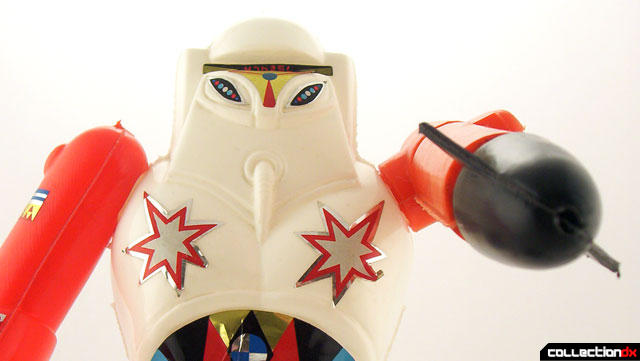 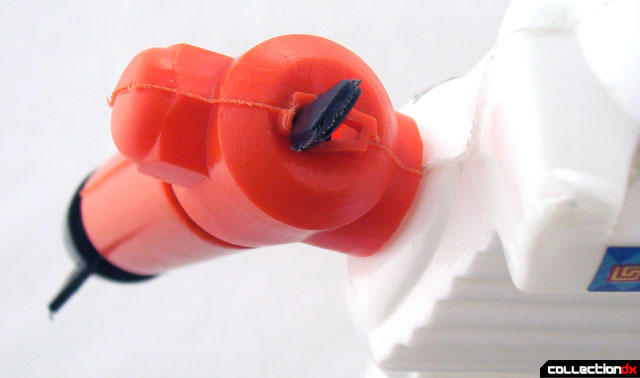 It's tough to see in pictures, but the left and right arms are slightly different shades of red. One thing that I do not like about the arms is that they attach at an angle. So when you raise them up, they get progressively closer and closer to it's face. It can smell it's own armpit. 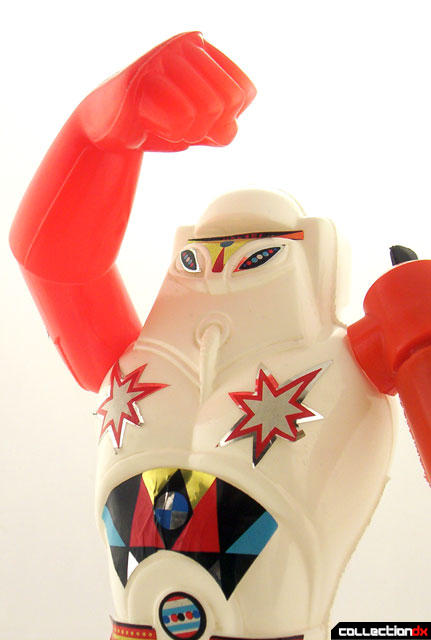 Besides being standing 13.5" tall and being made out of cheap polyethylene, what really attracted me to this toy is that it reminds me very much of a Horde Trooper from Masters Of The Universe. Yes, I know it isn't the same, in fact not even close, but the face gives me a similar vibe. So, in my twisted brain, this is a Horde Trooper Junior Machinder. Or as close as we'll ever get. And I was a big fan of the Evil Horde as a kid. What's happening now is you are listening to me try to convince myself that this was a worthwhile thing to buy. 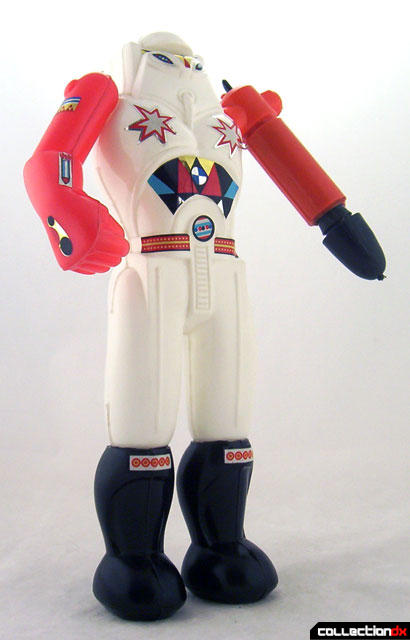 While I have no idea what this thing is supposed to be called, there does appear to be a manufacturer name ("Khumak") imprinted in the plastic on the back. Here's to hoping that Khumak made many more toys, all with crazy stickers like this one.

6 comments posted
I'm from Argentina and

I'm from Argentina and haven't seen that in my life!!!
Never heard of the manufacturer either.

Despite quality similarities to many bootleg machinders, this toy looks like it was molded whole cloth. If so, would this really be a bootleg?

Y'know....you are absolutely right! It's an original character using all original parts. I've done the toy a disservice by calling it a bootleg. I've altered the review to remove "bootleg" from the "toy line" category, etc.. Thanks for setting me straight. ;)

"What's happening now is you are listening to me try to convince myself that this was a worthwhile thing to buy."

best line ever in a CDX review, hands down.

By far, this is the most bizarre yet original robot that NenkroDave had reviewed. And I love every minute of it.

His head sculpt reminds me a lot of the design for the robot L (el? elle?) from Starcrash (aka Female Space Invaders). I always wished for a figure of him. As a design/costume/cinema robot he was on par with the OG Cylons, imo. :)