The ARC-170 (Aggressive Reconnaissance) fighter blasts into battle. A specially trained clone trooper serves as a pilot for this attack vessel that can carry a crew of clone troopers and has an on-board astromech droid to handle in-flight operations. The well-armed fighter lives up to its name as an aggressive vehicle against the Separatist forces during the Clone Wars.

The box has a great illustration of the ARC-170 in battle and shows a Clone Trooper pilot in the top corner. The Clone Trooper in the corner is a little misleading because the ship does not come with an action figure. If you have read any of my other Star Wars reviews you will know my gripe about packaging. Hasbro goes back and forth from window box to enclosed box with illustrations. Geez, will you make up your mind Hasbro! 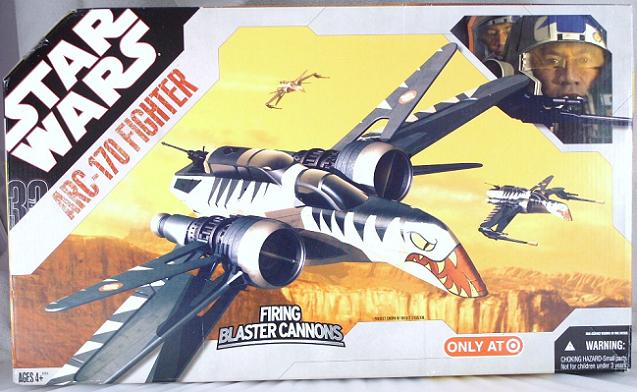 Upon opening box you will see that some minor assembly is required. Attach both wings, attach cannons to the wing tips, finally the rear gun and you're done! Once the ship is together it is really large and impressive. The ship is quite heavy and feels like its comprised of quality plastics.

The next few photo's give you a walk around the ship showing you the WWII inspired Tiger Shark paint scheme. This paint scheme is the Target store only exclusive. Note that the red tips of the outboard wing guns actually fire. 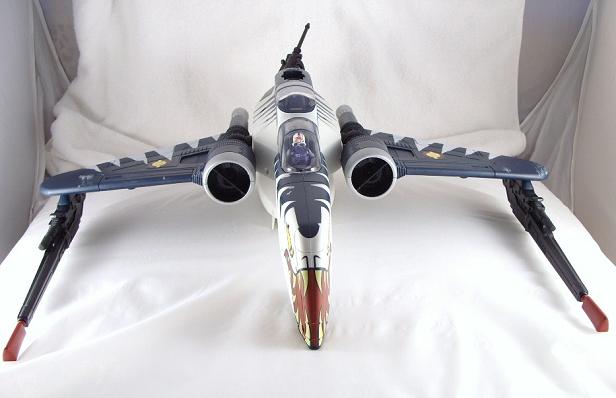 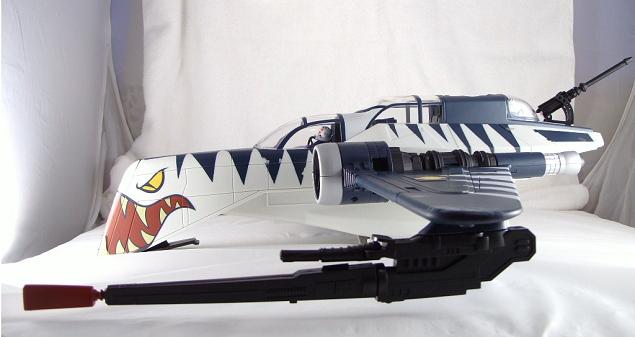 Wings open! Kinda has that X-wing feel to it, doesn't it? 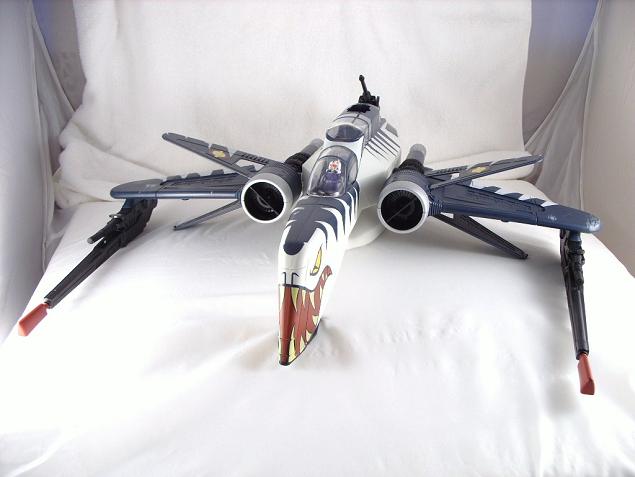 A close up of the retro Sharks face. I really like the look of this paint scheme, it really adds a realistic feel to the vehicle. 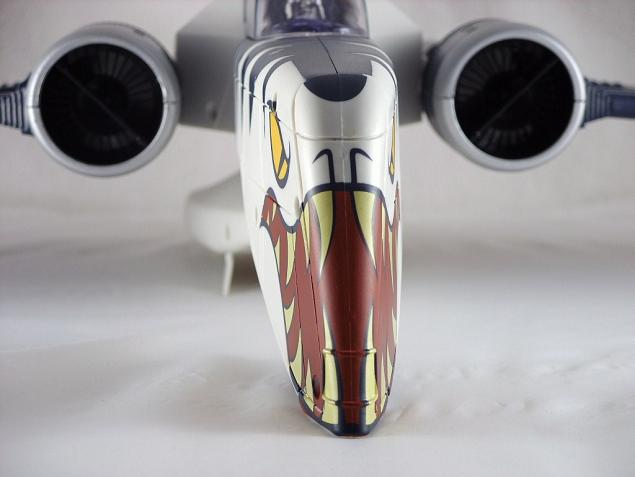 Cockpit open! The Clone pilot is not included. The ship has room for three Clone troopers and one astromech droid. 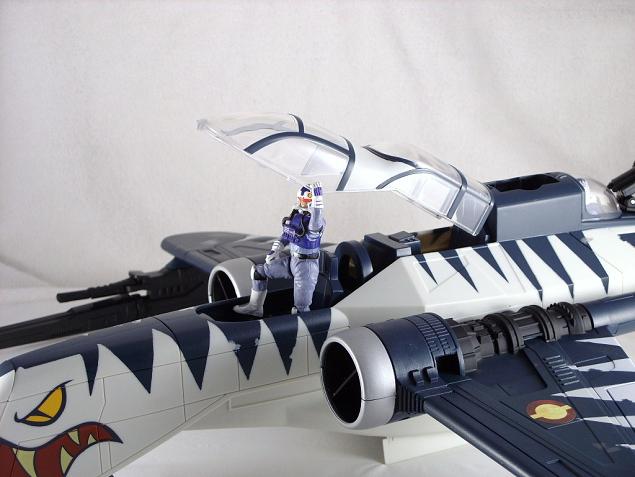 The next two photo's show the rear gunner's cockpit and the Astromech socket. Again, both figures are not included. 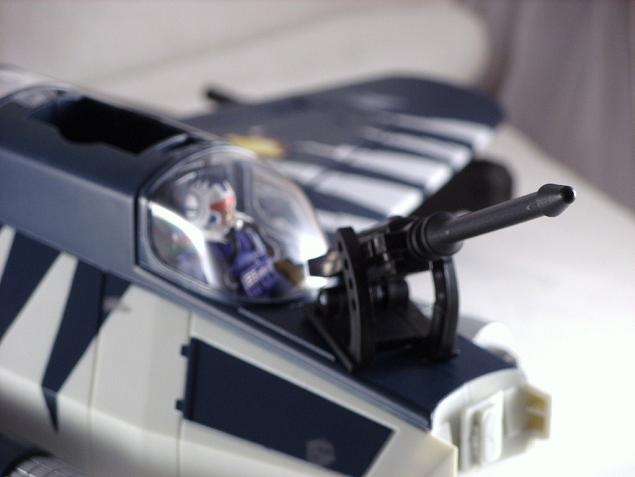 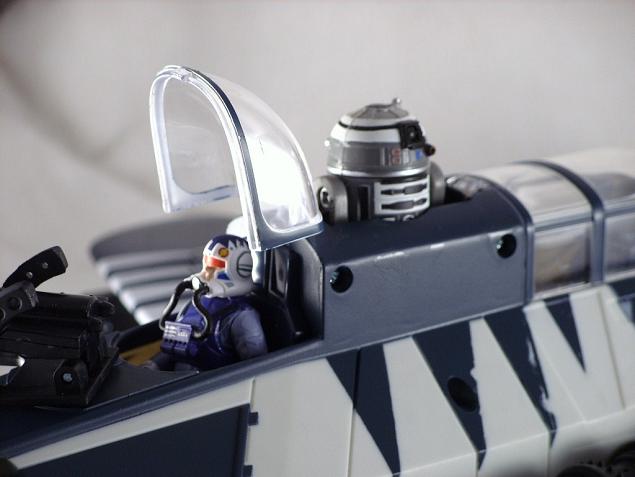 The final photo shows the pistol handle that is hidden on the underside of the ship. The pistol handle serves two purposes. First it's a sturdy holding point for when flying the ARC-170 around the room, and second the button on the grip releases the bomb hatch located forward on the pistol grip. 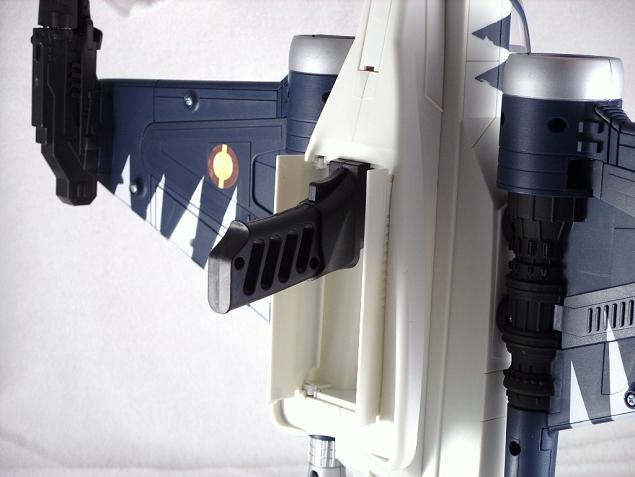 All the above being said, I really and I mean REALLY like this toy! From its size to its heft and detail, it's just plain sweet! My suggestion, If you want this ship buy the ARC-170 Elite Squad battle pack figures to go with it. Both this ship and the mentioned figures are Target exclusives that are long sold out but you can still find them on eBay for a reasonable price.

Remember "Bone Age" by Kenner? The inter-changeable fossilized Dinosaur toys from the late 80's? I like to point out that this and the Clone Drop Ship vehicle toy incorporate the old Bone Age peg system that made those toys so much fun. For example, you can take the wings off the ARC fighter and attach it to the Bone Age T-Rex, which is awesome. I would be interested to learn that these wings could be swapped with the Clone Drop Ship, creating a new vehicle, and vice versa. After all, there is no better property than Star Wars for the modular toy treatment. Japanese kids had a modular X-Wing, and the legos rule, yet every time I'm reminded of the Bone Age connection to these newer toys I feel like Hasbro is missing the boat with their 3 1/4" line.

I remember passing on the ARC-170 when it first came out for Ep III and kicking myself for it later. When I read about this one, I knew I'd get it.

Looks quite spiffy hanging above my similarly-decorated Republic Gunship.

Thing that ticked me off, though, was how I bought the thing at full price and a couple months later saw a bunch on sale for $7.50 at Target. BAH!