We thank Playmates for providing this review sample

April O’Neil, a yellow boiler-suit clad news reporter with an iron will and friend to the Teenage Mutant Ninja Turtles. Growing up, I never found April to be an interesting character, what with her not being a mutant, an alien from DUHMENSHUN EX, or a purple and silver samurai with the coolest name ever: OROKU SAKI (seriously, that just sounds like a bad guy’s name). April, however, was always an integral part of the show: she got kidnapped and had to be saved; she was mother hen-ish at times; she—oh. . .

Either way and with this, Playmates brings us April O’Neil from the new live action movie entitled Teenage Mutant Ninja Turtles. From the first wave of figures, April O’Neil. . . disappoints, and rather greatly at that.

Packaging:
April O’Neil is packaged in a simple blister pack with her held snugly inside. The back showcases all the other figures in this wave: 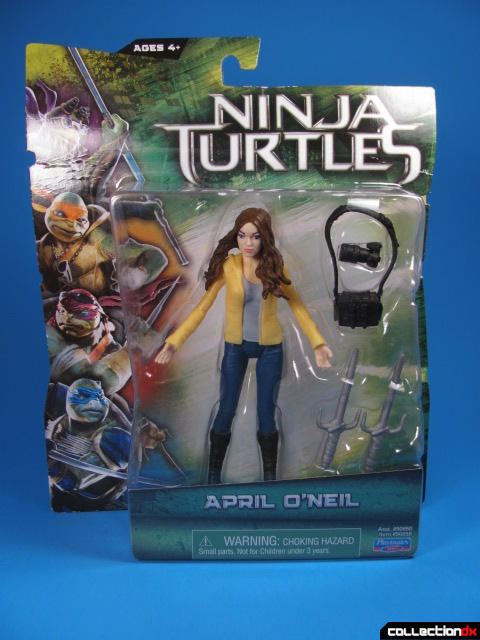 The Toy:
Simply put, April is not a very good toy.
Now, let’s go into some detail and explain why.

Her sculpt is all right; it has plenty of sculpted and 3D detail on her boots, pants, and iconic yellow apparel (though here a jacket instead of that gregarious 80s boiler suit). Her hair is probably the best detailed part of her. 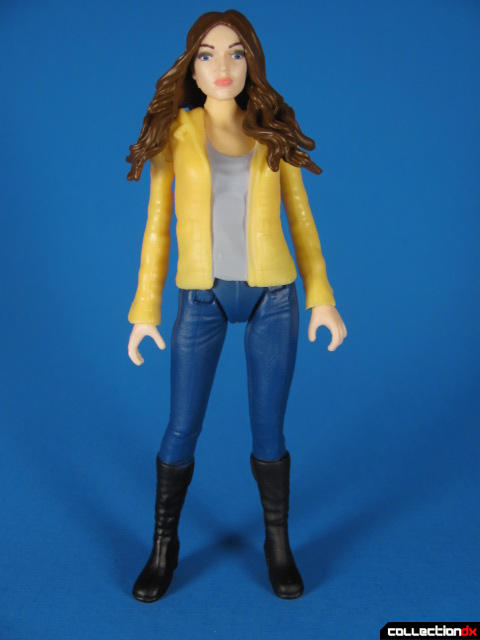 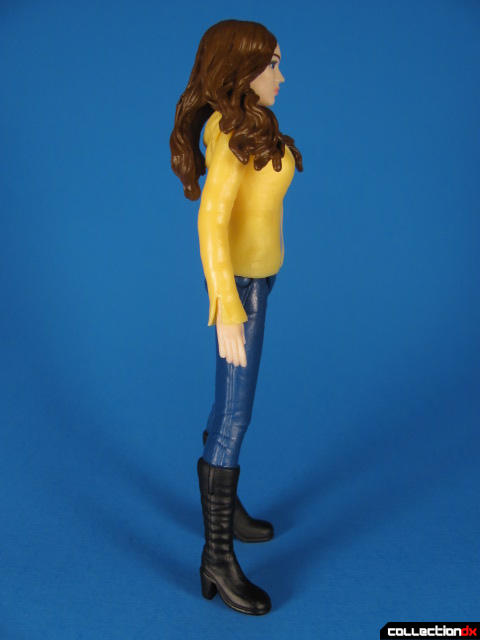 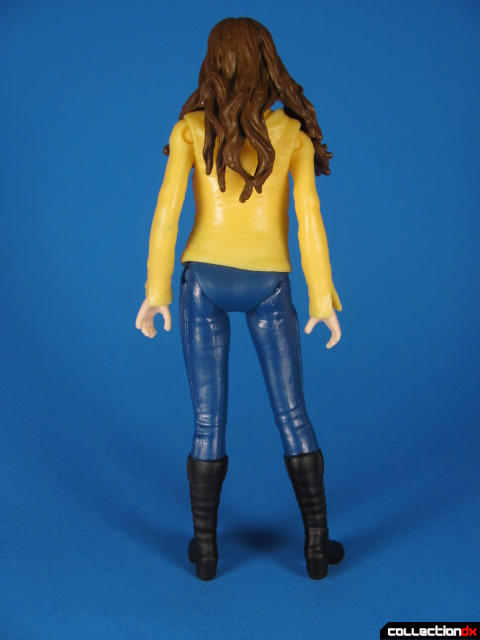 A combination of a boxy chest and more than unbecoming face make April come off looking. . . odd. I know what the figure is going for (Megan Fox), but the illusion of the character simply isn’t there; there’s really nothing to it and the final result is plain and uninteresting. 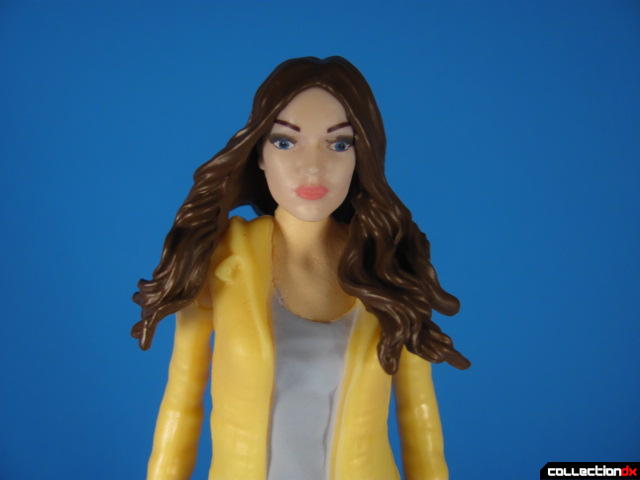 April’s articulation is limited and rather useless. She sports four universal joints--both shoulders and thighs—and her head, waist, and wrists are on a swivel. Her arms can move every which way (assuming her hair isn’t in the way), so that’s cool. The lack of elbows, however, makes her look like a 40s robot or—even worse—a toy from the mid 90s. She lacks any real expression as a figure. 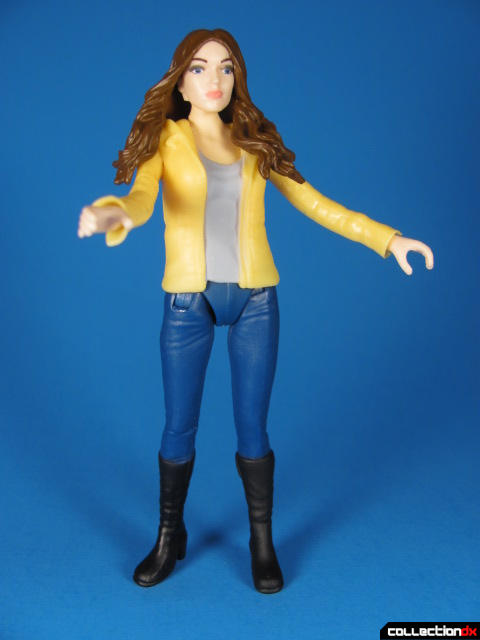 Her legs follow suit: they have universal joints in the thighs but no knees; this is even worse because now moving her legs is a completely useless gesture. She can’t stand in anything more than her neutral pose. This feels completely unacceptable. . .

. . . especially when you compare April to older, lesser priced, similarly focused, and gendered figures. For instance, the Yellow Samurai Ranger from a couple of years ago. Priced at $8.99, the Yellow Ranger sports knees, shin swivels, universal thighs and shoulders, elbows, wrist swivels, and a ball jointed head. Her sculpt is more pleasant and detailed as well. 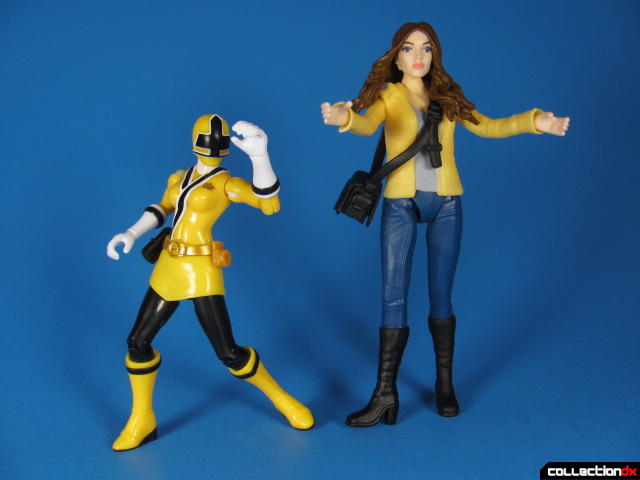 Same for Spider Woman of the Marvel Universe line. She is LITTERED with articulation; it would take a small essay to list them all. And her sculpt is wondrous. All of this and she’s smaller, more lithe, and still less than April. 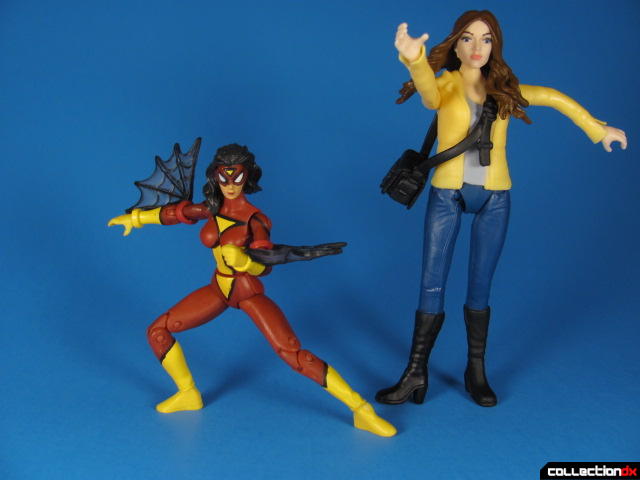 With these two figures serving as example, I find it rather unacceptable that April costs as much as she does and is as limited as she is, especially in a line of figures that have all the articulation she’s missing (and more) for the same price. She feels old, behind the curve.

She stands at a good 5 inches, though: 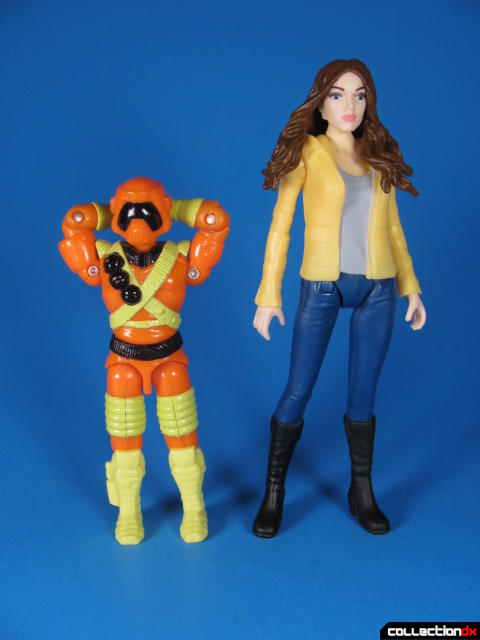 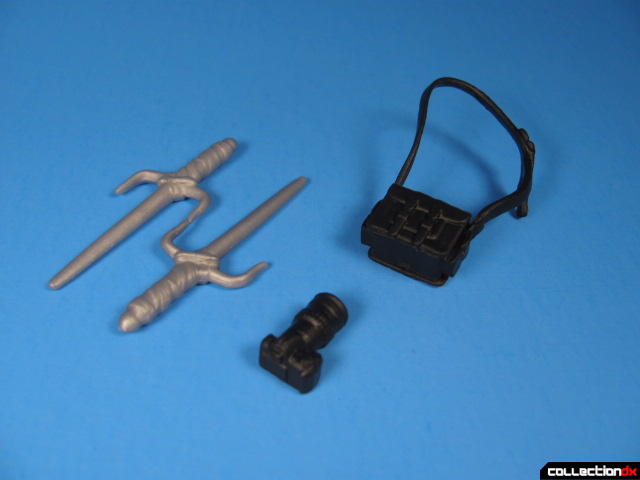 The accessories are all molded in solidly colored plastic. They are not bereft of detail, however, and look good in April’s hand. 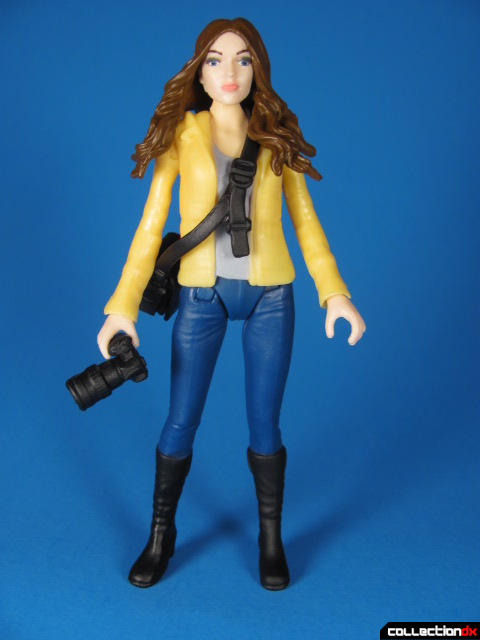 The sais are grossly huge and look comical when wielded by April. Also, due to the lack of elbows and knees, April never looks cool holding her sais or camera; she looks more like she was violently woken up and then grabbed the first thing she had lying around in a daze. 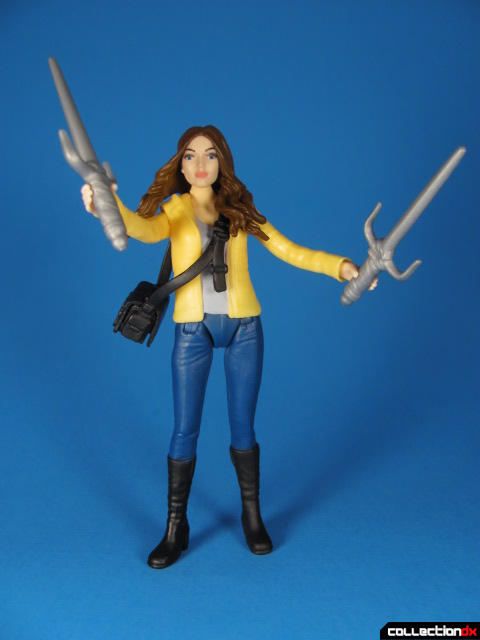 I don’t know how April ever got a job as a reporter when she can’t even look into her camera’s viewfinder: 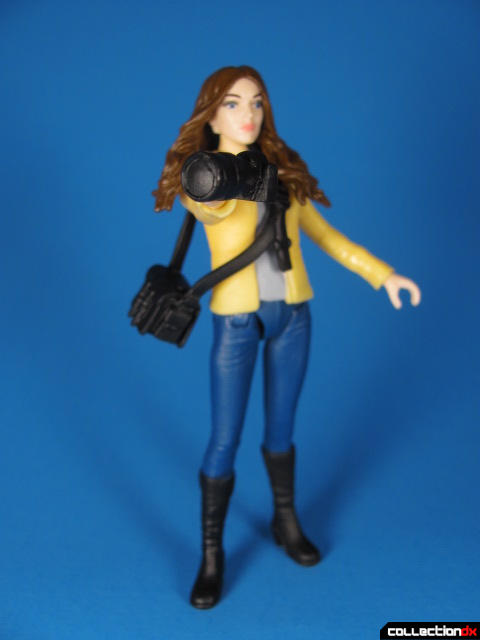 Though April comes with some accessories integral to her character as we all know and love her for, you can’t do anything believable or imaginative with them. With her plastic being as gummy and pliable as it is, she also cannot hold them half the time. This—along with her nonexistent articulation—not only limits pose-ability but playability. I don’t want to play with a toy that can’t even hold its own weapons and gear!

To wrap this up, April is bad.
She is sorely behind the times of what action figures have been able to achieve in this day and age and I find it all to be painfully intolerable. Useless joints, off-putting sculpt, and unwieldable accessories are all the nails in her coffin. Although April O’Neil is a bad toy, that doesn’t mean you can’t have just a little fun. . . 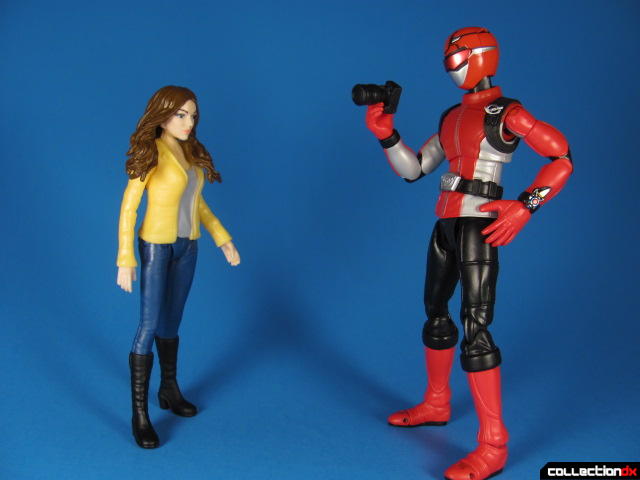 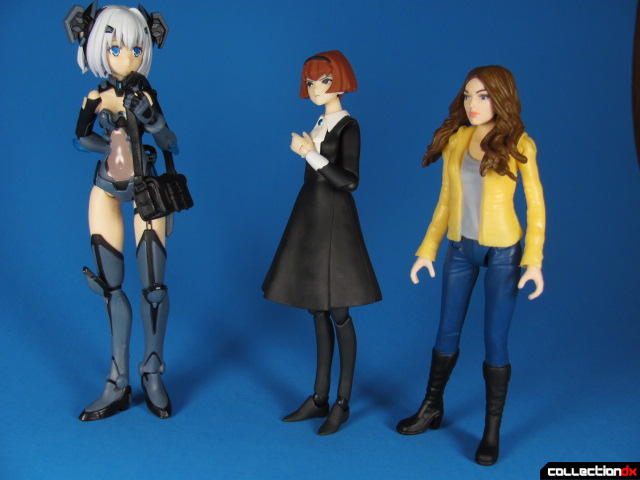 “Now, are you guys absolutely sure you want ME to take this picture?”
“Just take the picture, Decade.”
“Okay, as long as you’re sure.” 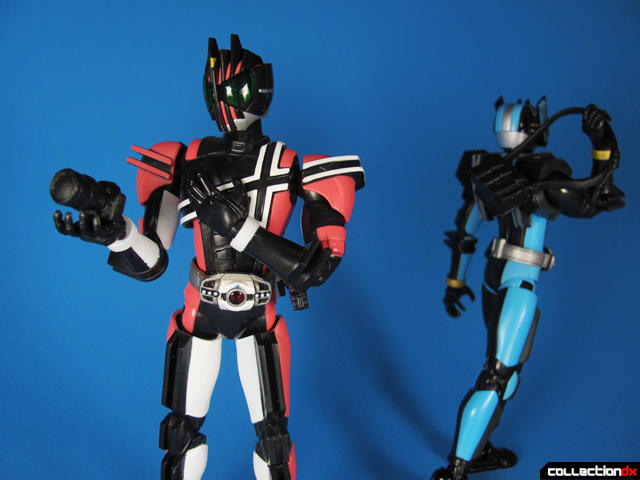 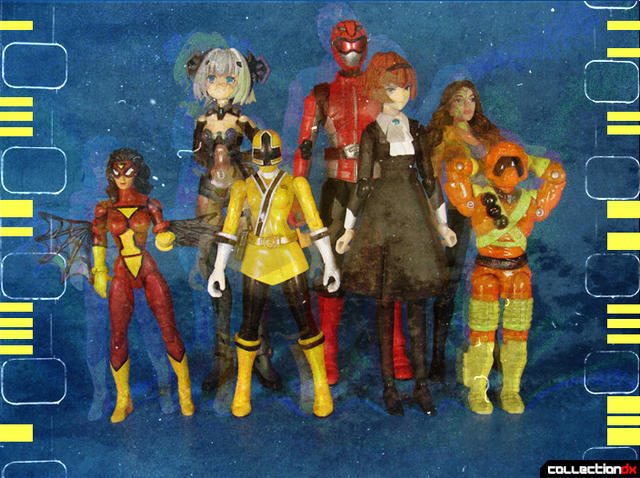 We thank Playmates for offering us this review sample

10 comments posted
Is it just me, or does this figure look more like Mila Kunis

Is it just me, or does this figure look more like Mila Kunis than Megan Fox?

Also, her articulation is about on par with the first X-Men movie Rogue figure... from 14 years ago. Back when toys could sell themselves on good actor likenesses alone... which this figure doesn't have.

And I was saying that to myself earlier today: this figure is about on par with a figure from about a decade ago.

Wow this is...this is really bad. I'm imagining the reasoning that you'd put this out in a line where it's far worse than any of its shelfmates, and the reasons I'm coming up with are all mostly all sexist and gross. I do not like this at all Playmates.

Mostly though, I just wanted to point out how great the original April figure was, who was packing heat in her gear bag. "Oh, you have sais? That's great, let me just pull out my gun."

It may more to do with them knowing that she's gonna be a peg warmer to begin with, so they didn't put in any effort; I mean, what child is really bursting at the seams wanting to get April instead of their favorite turtle or a armory of knives on legs? Of course, sales will now be lower because she's a bad toy because someone thought that no one would buy her in the first place; it's a vicious cycle of cause and effect.

And, hey, a girl has got to protect herself in New York; that neon yellow makes her a big target, ha!

Well, I had April, but then again I also had all of the first run Turtles toys. I did genuinely think she was cool at the time, because her accessories were really great (compared to like, Splinter's dumb bow).

I'll say though that this would be something I'd pick up on super steep discount, which inevitably it seems it would be, because I'll always take more cameras for my other figures.

(Also, I'm on my phone right now so I may have accidentally reported your comment instead of replying. Oops...)

Man, I love those last pics, especially with Red Buster and Decade.

Oh, Playmates, why do you folks insist on still making figures using 1988 methods? Why do you keep on using articulation that is totally useless?