Kids Logic is the new kid on the toy block, but you wouldn't know it by their first finished piece. 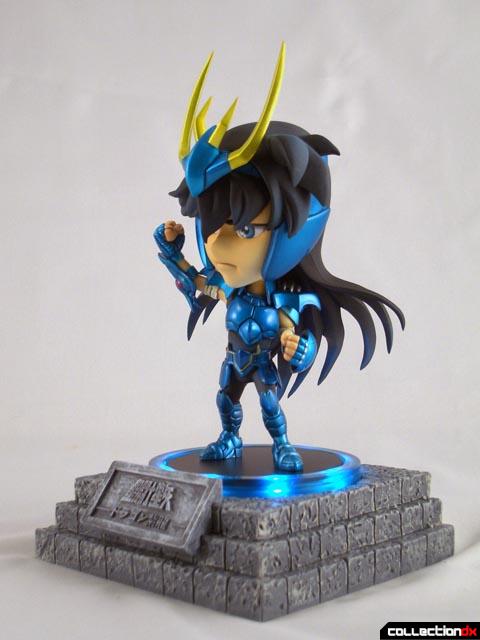 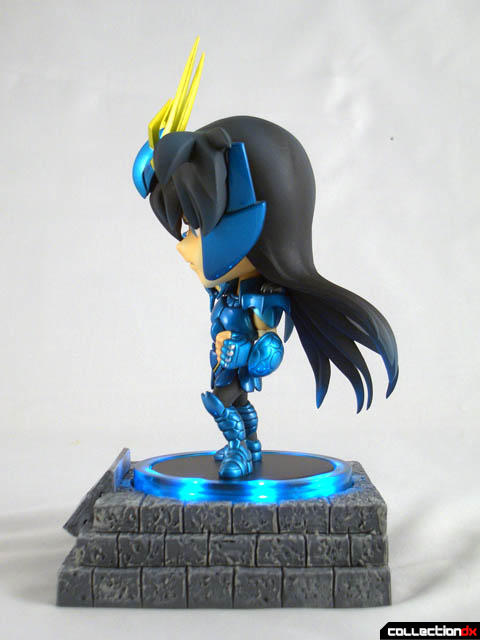 Total disclosure time, I don't collect super deformed figures. I'm not really a fan of the style but I know that internationally it’s very popular. So when Ken said he was sending me a sample to review I was a little apprehensive, I mean, how good could a first time SD style fixed-pose figure be? It turns out I was in for a pleasant surprise. 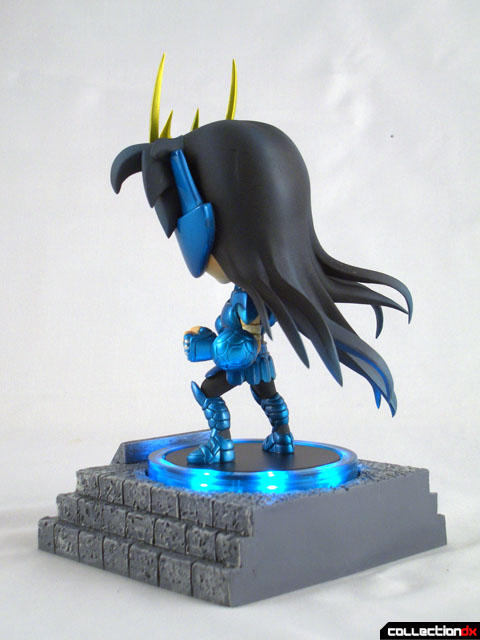 Dragon Shiryu is the first release in what will be a series of Super Deformed fixed-posed statues of Saint Seiya characters called Cosmos Burning Collection. This isn't just another SD line, there is a bit of a neat twist with this one. 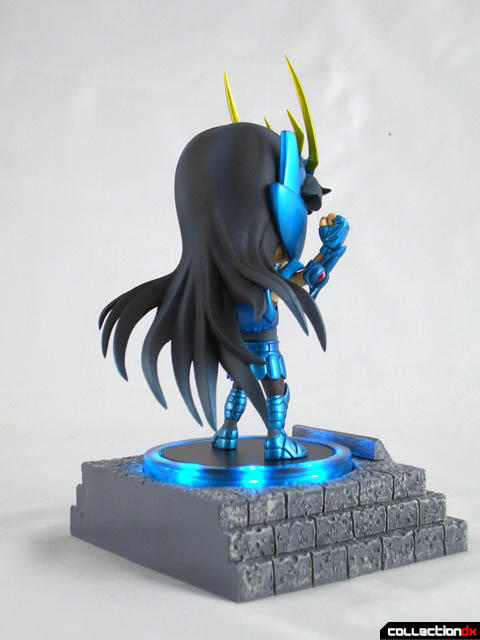 The package is very well executed. Photos of the piece decorate the box with a large window to see the figure inside. 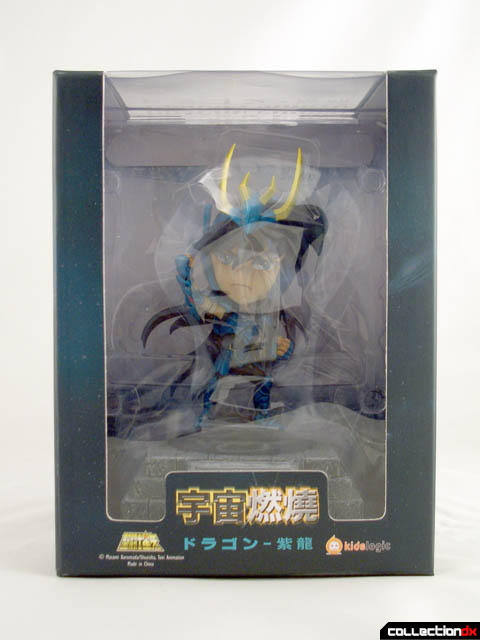 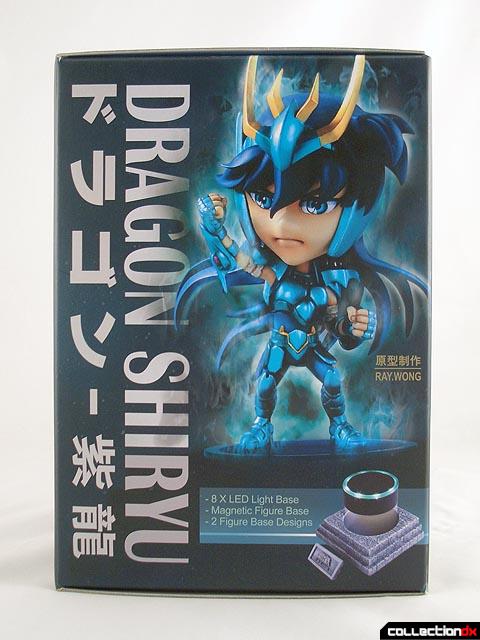 The cardboard used is a nice thick, heavy card-stock with the name of the character printed over the window of the box. These are nice subtle touches that let you know before you have even opened it, there is quality inside. Paying attention to the quality of the packaging is something many manufactures overlook in my opinion. 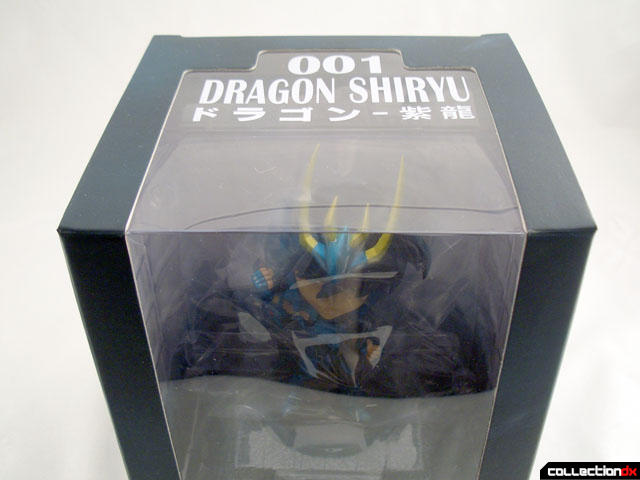 Inside the package you will find... 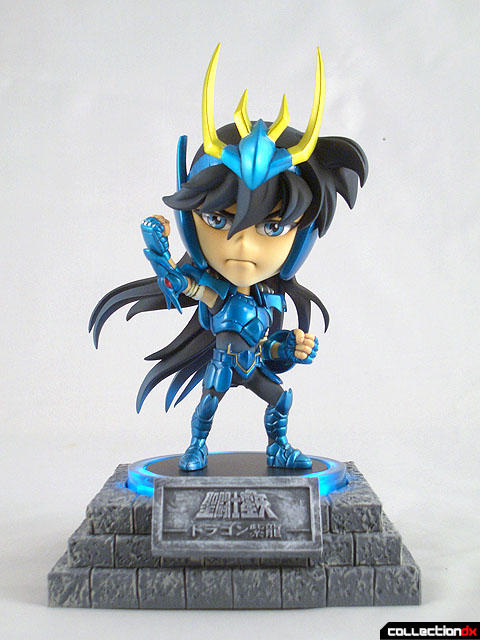 Dragon Shiryu is a fixed pose statue sculpted to be performing his signature move from the series, the Rozan's Rising Dragon Force. The armor he is wearing is what fans of the show refer to as it's 'final" form. The armors (Cloths in the series) evolve as the series goes on, getting slightly modified as the story is told. 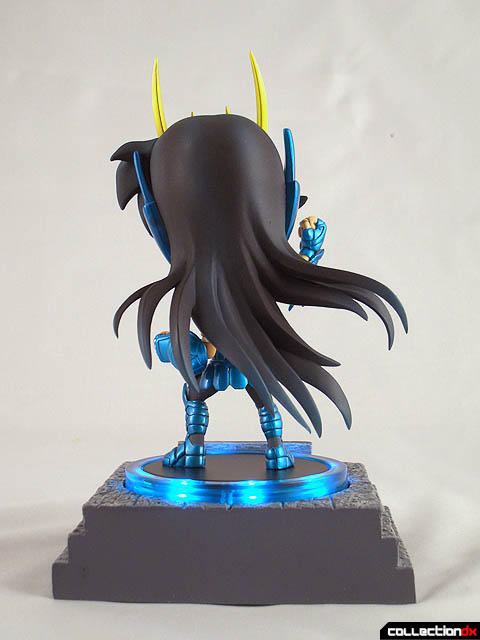 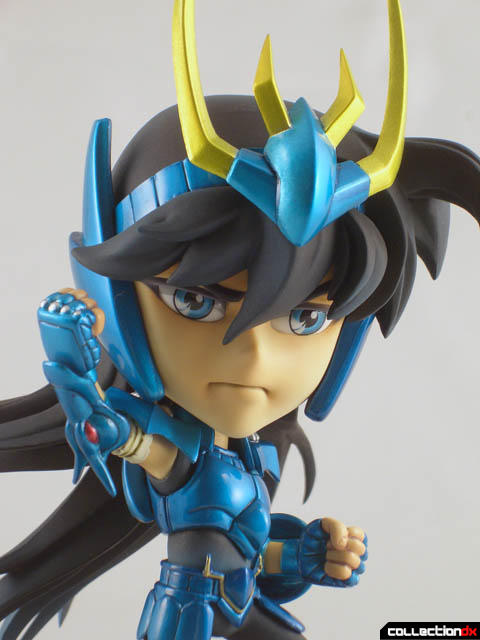 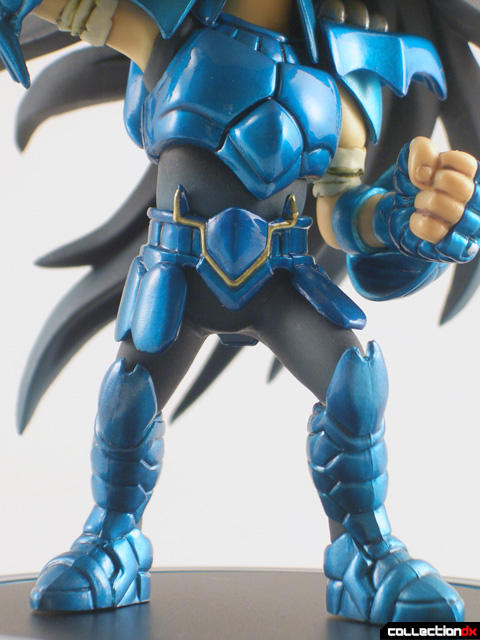 Close inspection of the figure reveals no flaws with excellent sculpt detail and paint applications applied with precision. Shiryu's Cloth is painted in a high gloss metallic shine while the under-suit, face, and hair are done in a nice flat color. 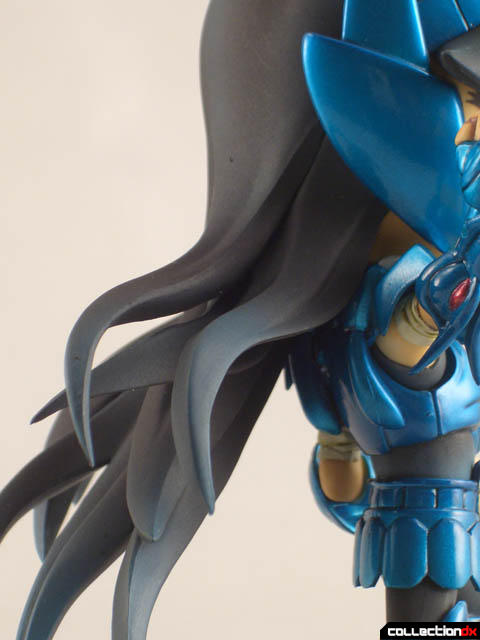 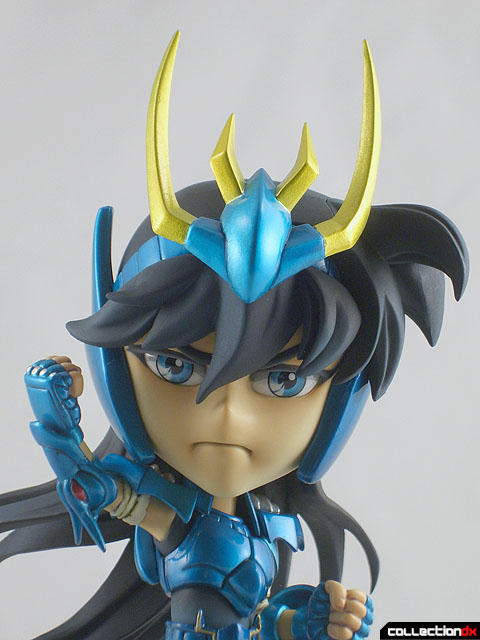 The figure is nice and solid in the hands and if I didn't know Kids Logic has made it I would have presumed it was by one of the bigger fixed-pose anime figure makers. This kind of quality and attention to detail is difficult to achieve by longtime toy makers, never mind a first time toy maker. 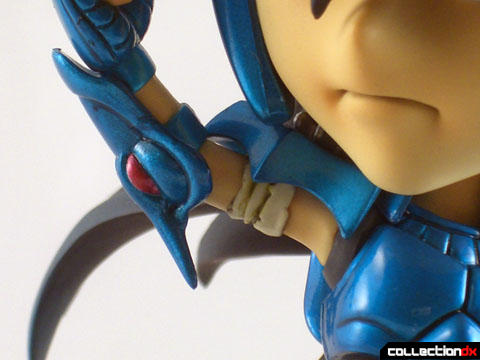 Kids Logic didn't stop there. In the feet are very strong magnets that stick to the magnetic base included in the box. 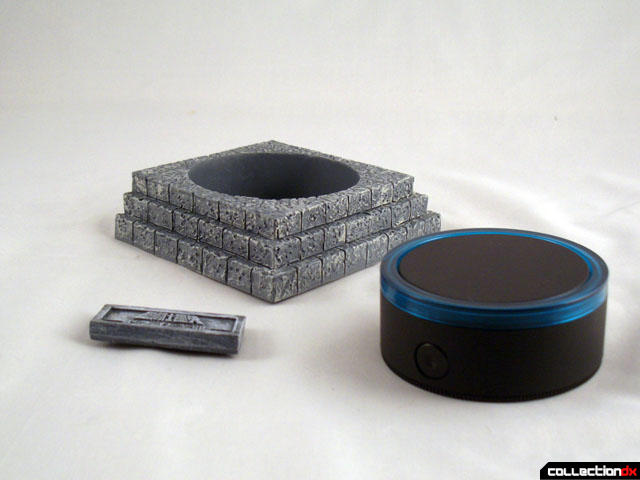 The base is made of two main parts; the decorative outer temple steps and a magnetic light-up core. You read that right, magnets and lights. 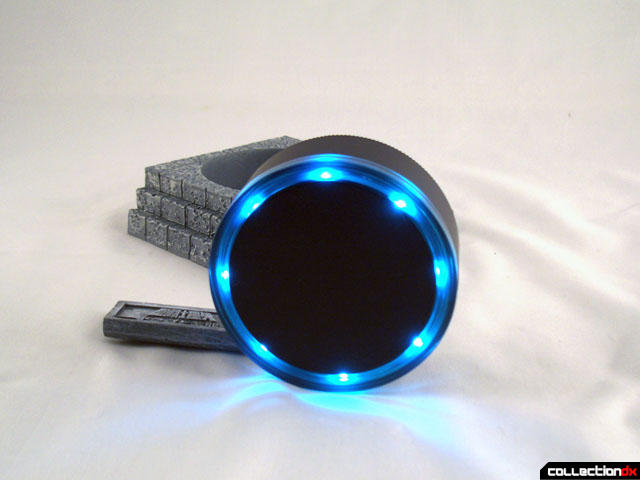 The core base takes 3 AAA batteries and features a button on the back. Press the button and the ring around the magnet lights up to simulate the Cosmo burning effect of the mystical warriors of the series. Tapping into one's "Cosmo" is how the mystical warriors do what they do. It's sort of like Jedi using the force, but that analogy is an oversimplification of a very Eastern concept. 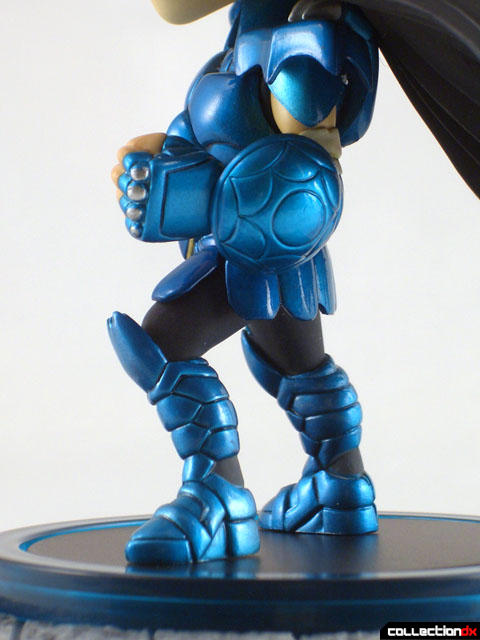 The magnets do a great job of securely holding Shryu on the display and the light gimmicks really make it feel like something special on the shelf. 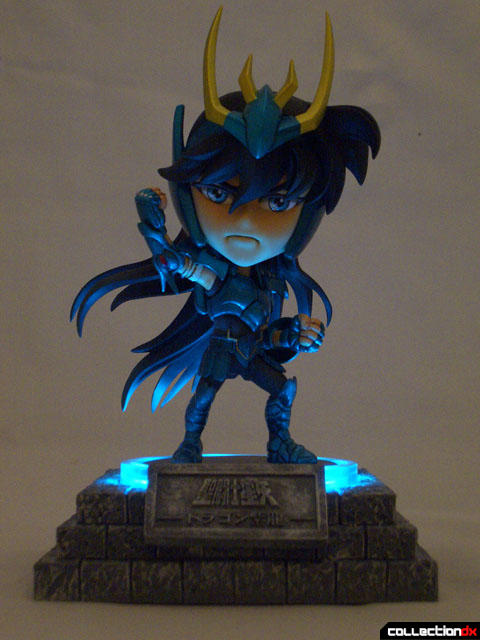 While I wouldn't normally have sought out a SD version of Dragon Shiryu, I must say I am really stunned with how well this turned out. Saint Seiya fans looking for something different and unique should definitely grab it and keep an eye out for more Saint Seiya is due any day now.

I think Kids Logic is a company to keep an eye on in the coming years if their first release is any indicator of future quality and inventiveness. I look forward to what the future will bring from them.

Wow, this is actually very nice for a first time effort. I love the paint apps, they look good even up close. While Im not a fan of the series or fixed pose figures, this is something that could really catch my attention if I ran across it because I normally wouldn't hunt down something like this. I look forward to seeing what else they have coming in the future.