As a longtime Transformers fan, I have watched third party companies produce their own combiners with mild interest, but for some reason I never felt the need to go all in on their piecemeal release schedule and sometimes questionable design choices. I don't begrudge my fellow collectors who enjoy these toys, but I feel like there is something "off" about the likes of Uranos and his ilk. After picking up a few of Hasbro's Combiner Wars figures, I think I have a better idea of what their unofficial second cousins have been missing. I'm kicking off my look at this line by checking out a fresh face in the Autobot ranks: the Aerialbot named Alpha Bravo.

When Hasbro first showed off the first wave of Combiner Wars figures, Alpha Bravo produced a decidedly mixed reaction from fans. He's not based on any existing Autobot besides a color scheme that is vaguely like Slingshot's and a body that looks suspiciously like Combaticon Vortex. A little while later, TakaraTomy announced their home market version of Combiner Wars called, "Unite Warriors", with the first entry being a gift set of Aerialbots where Alpha Bravo was replaced by a more proper looking Slingshot, who is a repaint of the existing Firefly figure. 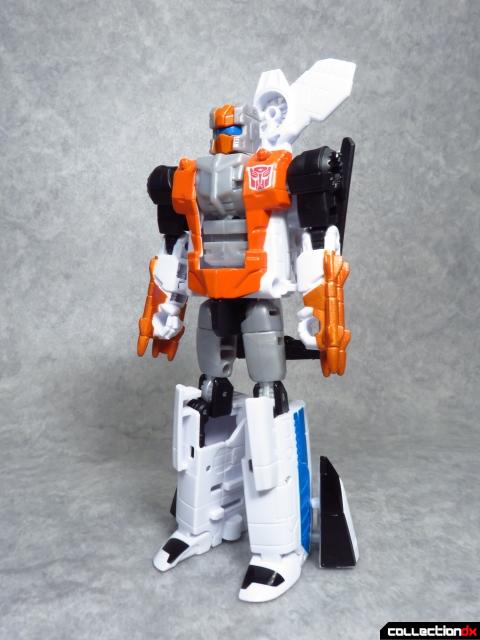 Standing six inches tall from tail rotor to toe, Alpha Bravo is an attractive looking Transformer who feels quite solid in the hand. Despite knowing the base figure was always intended to be someone else (and is going to get a repaint as Protectobot Blades), I feel like this toy's color scheme and overall attitude helps establish Alpha Bravo as his own character. It helps that his clean design gives him the look of a rank and file Autobot soldier so it's okay if he seems a bit generic. 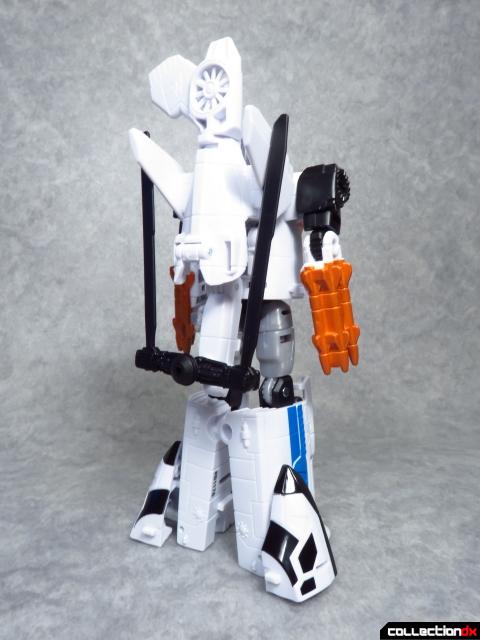 From the rear, Alpha Bravo looks a bit messier. This due is to the fact that his helicopter rotors don't really have a place to go outside of vehicle mode. The instructions have them awkwardly jutting out to the side, so I just flipped them up against his tailfins instead. If you tilt the base of the rotor up enough, the whole assembly will stay happily out of the way for the most part. 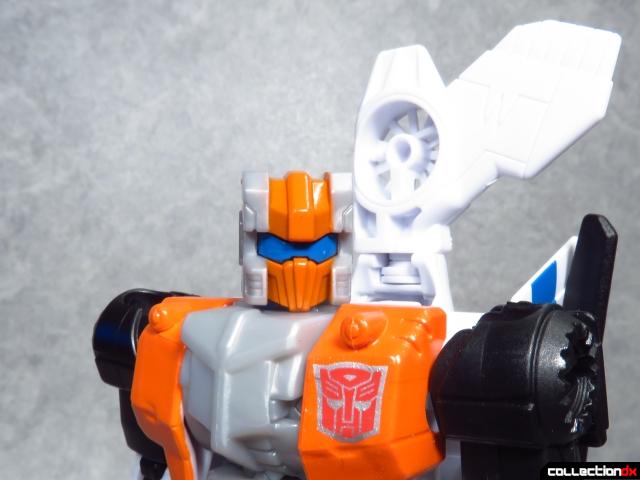 His head has the design of G1 Vortex with colors similar to G1 Slingshot, but I find this combination produces a unique identity for Alpha Bravo. The piercing blue visor gives him the look of a trained operative who is cool under fire. 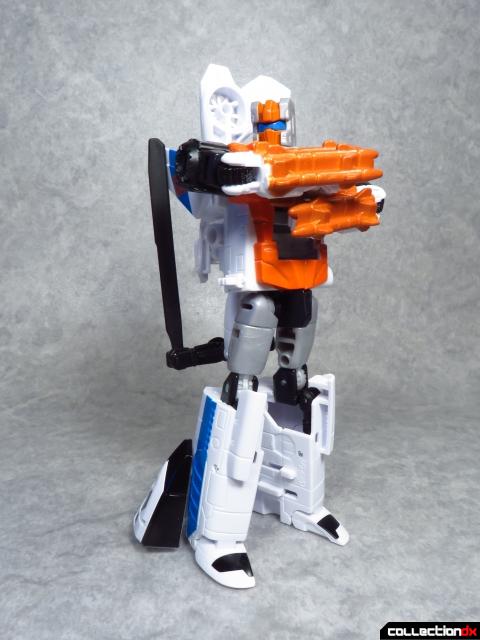 And the missiles on his forearms make him look like a dude you don't want to mess with. 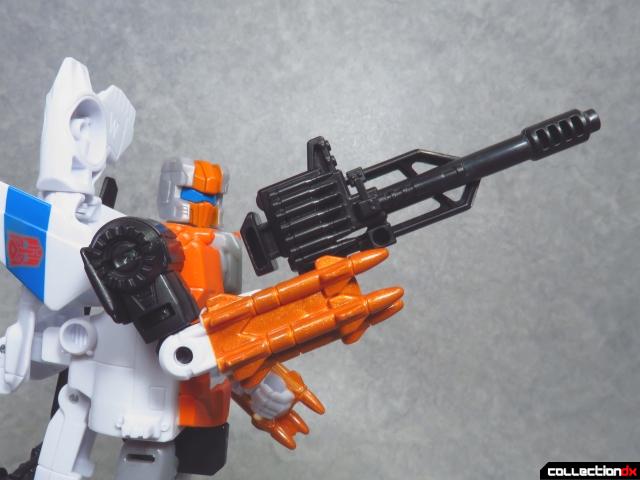 For a handheld weapon, Alpha Bravo has this chunky machine gun that is complete with an exposed ammo belt molded on one side. 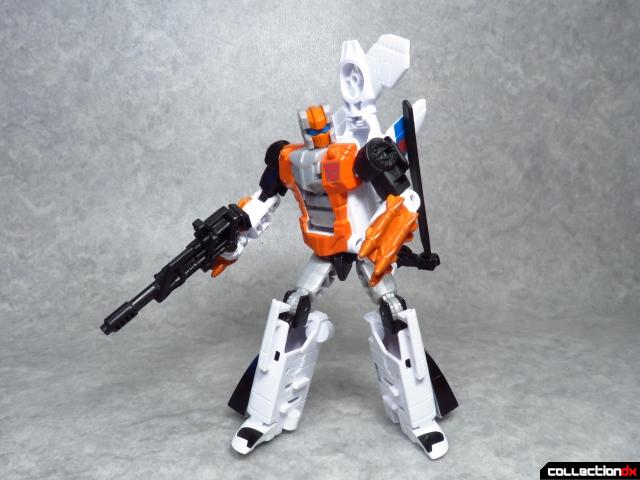 Even though he's meant to be someone else's limb, Alpha Bravo is a terrific action figure by himself. 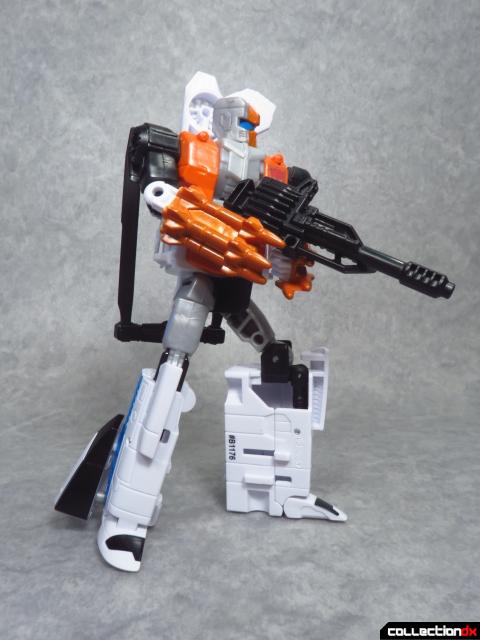 He has a complete suite of articulation for a deluxe class Transformer and looks great wielding his automatic hand cannon like a real operator. 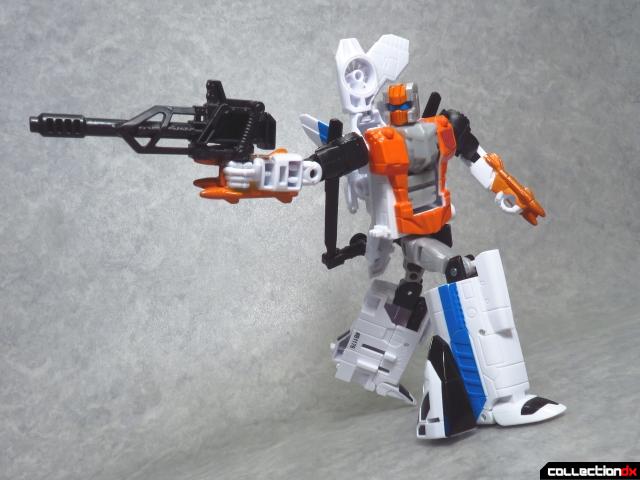 He can even spin around and pop off a shot one handed thanks to the tight ball-joints in his shoulders, ratcheted elbows, and a fully functional waist swivel. 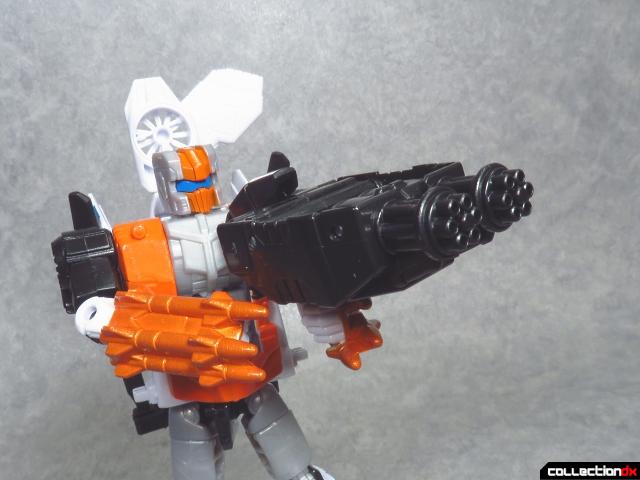 Alpha Bravo's other accessory is a dual Gatling gun weapon. Its bulky boxlike form hints at this weapon's other function as both a foot and a hand for when the main figure is in limb mode. 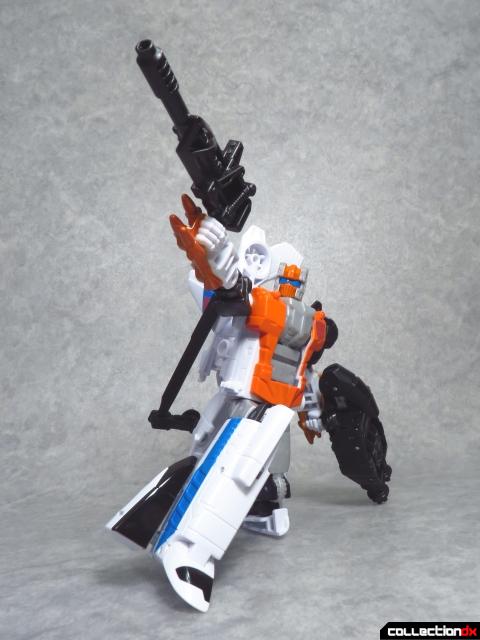 This Autobot's choice of weapons makes me think of him like a veteran close air support operative who gets in and lays down suppressive fire while his teammates press on in a hot LZ. 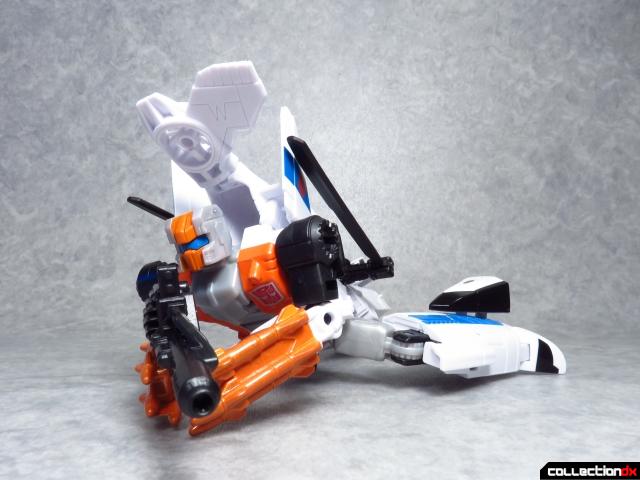 One cool detail is how many of the Combiner Wars figures who have a flying vehicle mode are capable of looking up. For Alpha Bravo, it helps him stealthily approach a hidden position to set up the kill zone. 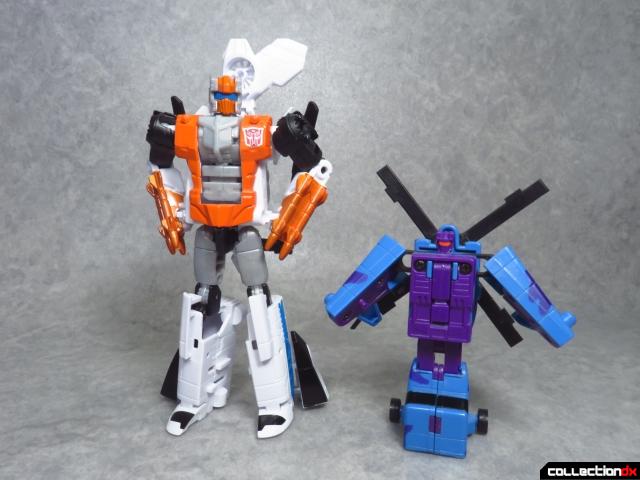 Placing Alpha Bravo next to my Generation 2 Vortex makes it easier to see the similarities between the two. This isn't a bad thing at all, as Vortex was always a neat little helicopter Transformer so it's nice to see his legacy continued in this new wave of Combiner team members. 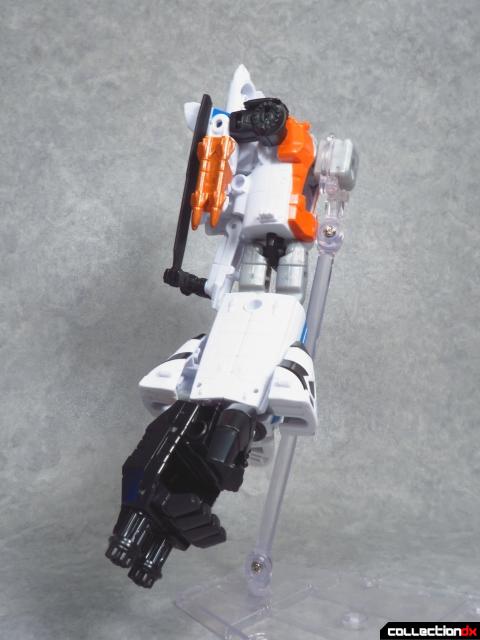 The majority of Combiner Wars toys are modeled after the classic "Scramble City" teams where each smaller member can become an arm or a leg. As such, Alpha Bravo can also become a helicopter-themed appendage. Going from robot to this form is pretty easy as all you need to do is push his legs together and flip out the special combiner joint from his chest. A block of four fingers flip out of the box weapon, while a hinged thumb allows the figure to be either a right arm or left arm. Also, the instructions say to simply peg Alpha Bravo's arms into his sides, like in helicopter mode, but I find it is just as easy to tuck them up and out of the way as I have done in the picture. This helps free up the elbow area from any obstructions. All Combiner Wars limbs use the base figure's waist and knees for the arm mode's elbows, which is a technique many attribute to third party toys but actually originated with G1 Predaking. 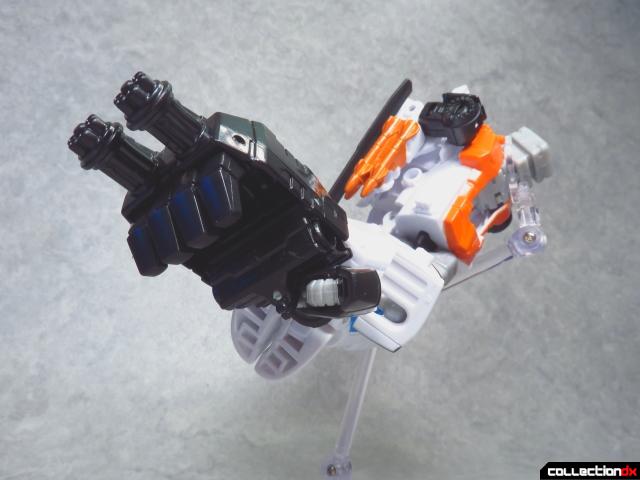 While I do not have a torso to connect this limb to at the time of this review, I find that I'm still transforming Alpha Bravo into arm mode just to mess around with it. Though the hand part lacks fully functional fingers, it still manages to be quite expressive with the small set of hinges allowing it to open and close in a menacing manner. 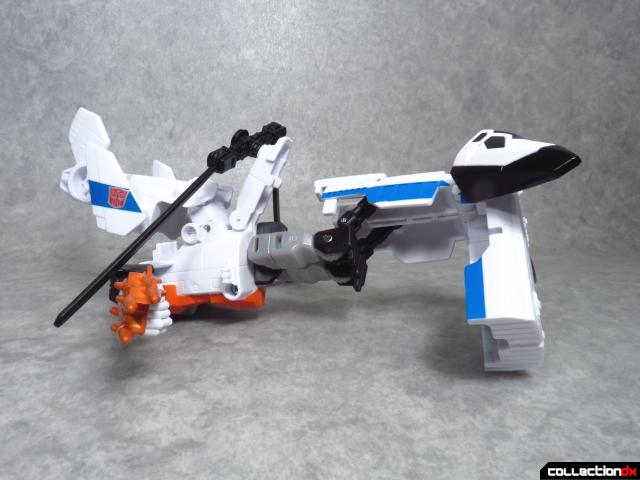 Transforming Alpha Bravo to vehicle mode is fairly involved given the straightforwardness of his design. His waist rotates 180 degrees and rather than only sliding inward, the Autobot's shins actually split open to allow a hidden hinge assembly in his knees to bring everything close together. After that, the rotor assembly flips down and tabs into the legs to keep everything secure. The rear of the helicopter travels down on a solid double hinge and locks in place, while the tailfin rotates to its proper orientation. 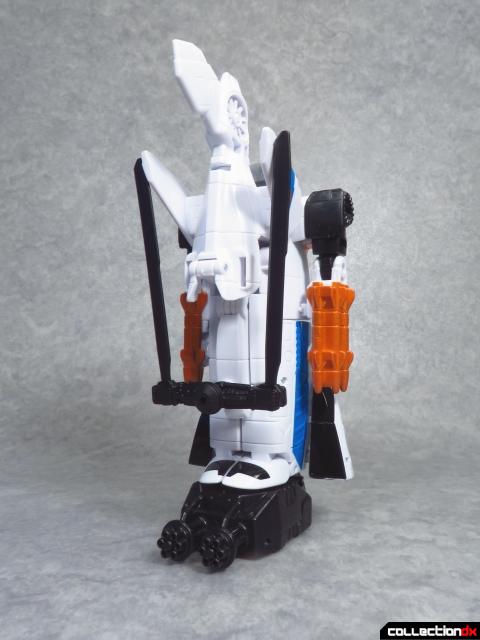 Going halfway to helicopter mode is basically leg mode for Alpha Bravo. Again I don't have a body to connect it to at this time, so we can only sit here and admire his inherent legness. I do like the triple function hand / foot/ weapon accessory, as it gives that often lost piece of a G1 figure a place to go no matter what form a Combiner limb takes. 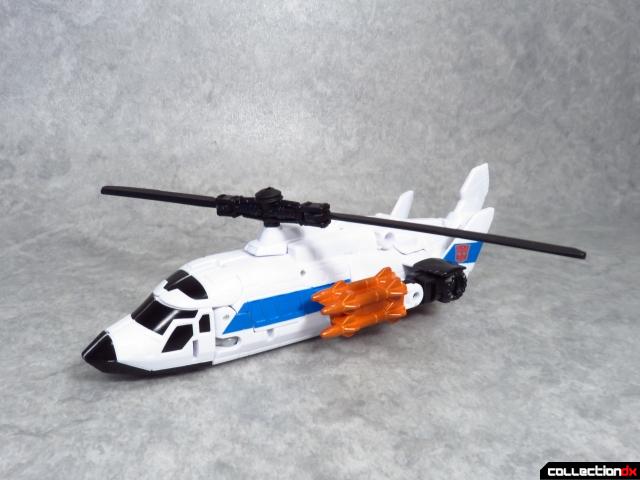 In vehicle mode, Alpha Bravo is a helicopter of nonspecific make that combines the look of a speedy civilian transport with the firepower of huge missiles. This basically means he is a modern day Airwolf, and that's awesome. 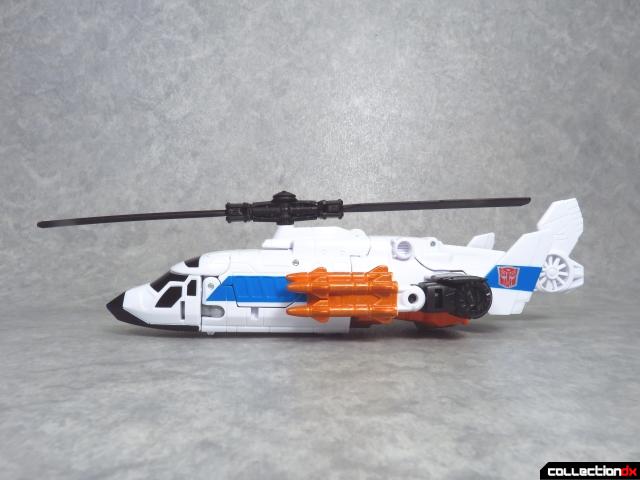 The helicopter mode goes together solidly and looks quite good. Even his arms just being on the side of fuselage is alright because they are covered by the aforementioned huge missiles. 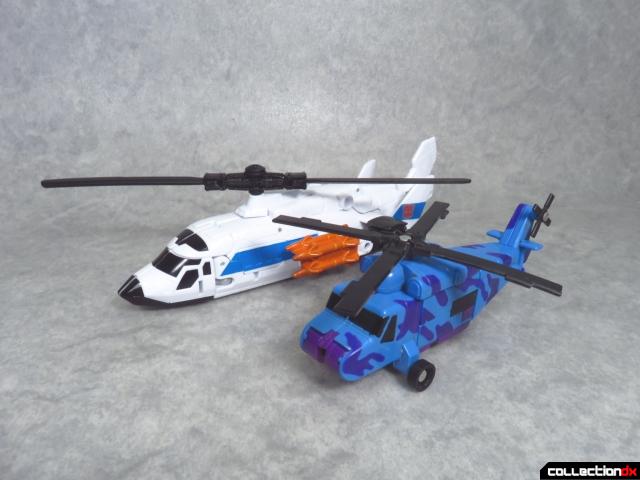 As an update on ol' Vortex, I can definitely dig it. I can't wait to see this repainted as all the different versions of the classic Combaticon and we all know there's at least five decos for just that one character. 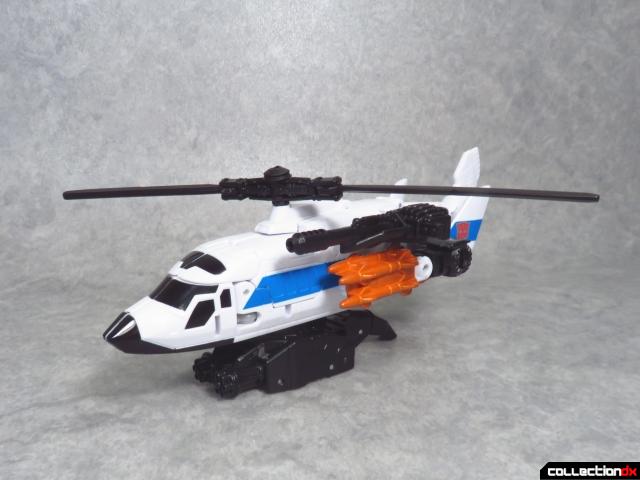 Both of Alpha Bravo's weapons can be plugged into his helicopter mode thanks to a few standardized ports all around the hull. 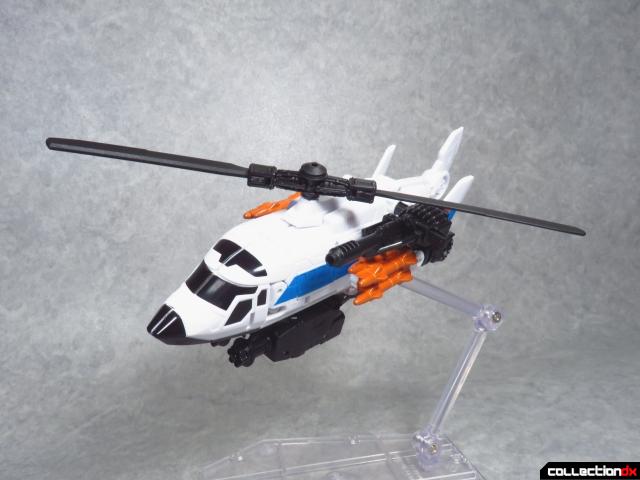 Now he's all set to buzz the trees (and the heads of a few Decepticreeps). 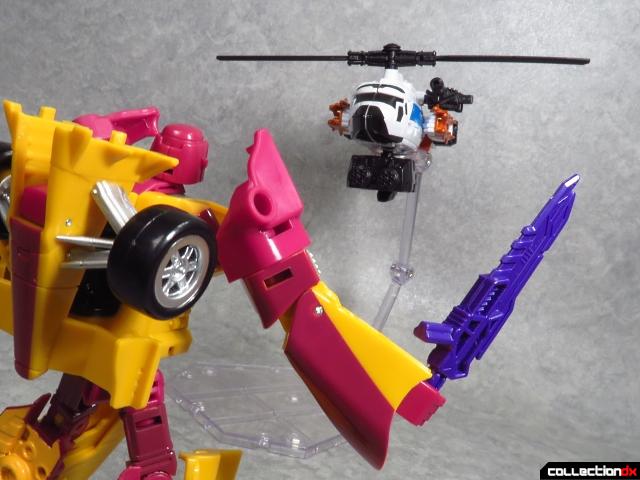 "I love the smell of burnt metal in the morning!" 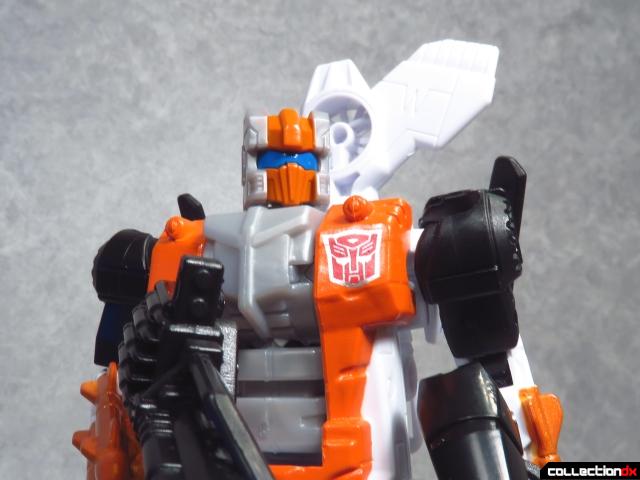 I feel like I haven't been this excited about a non Masterpiece Transformer in a while, but Alpha Bravo is wholly deserving of the praise he gets. He feels smartly engineered and makes for a fantastic deluxe class Autobot on his own with his two limb modes being perfectly integrated into his form. And I think the real triumph of Combiner Wars over the third party offerings is the idea of "accessibility." Guys like Alpha Bravo and Dragstrip are straightforward, solid, and playable Transformers that are readily available en masse at local retailers both online and off. I very much believe designing a form-changing robot to emulate the Scramble City combiners of old comes with inherent limitations. Even the third party toys struggle to overcome those limitations. And this is in spite of having a relatively bigger budget to work with per figure. People who read my reviews know that I do also enjoy more intricate Transformers, but I feel Combiner Wars toys, with their more streamlined approach to design, are a lot more fun. To me, the true spirit of Scramble City lies in four smaller guys merging with one bigger guy, and that all the toys involved are simple but well executed. You may disagree, but I feel Hasbro and TakaraTomy have a real winner on their hands/feet/guns here.

I think you're right that Hasbro finally realized they were losing a lot of fan money to the third party toymakers. They certainly took a few design cues (it's more apparent in the upcoming Devastator). But now I can get an entire Superion at local stores for approximately the price of one component of a TFC combiner AND I won't have to wait a month for a replacement when something breaks.

I'd disagree with the idea Hasbro is taking design cues from Third Party combiners. The majority of the unofficial ones are still done in the style of the old Crossfire set for Energon Bruticus. Even Titan Class Devastator is just a modern version of the original.

That's very true. I meant more along the lines of how some of the parts are engineered, like the transforming Devastator fists which look a lot like the trailer fists from Maketoys' Giant. That they're putting the work into designing the new combiner fists/feet instead of those awful Energon weapon versions is a sign to me that Hasbro actually does care about the design process this time around.

I passed this guy over on the peg recently. I really love the style of his robot mode, but I just can't get around how he's so clearly a commuter helicopter in civilian colors with giant missile racks on the sides. It's even more egregious in the planned Blades repaint, where he is supposed to be an ambulance helicopter. Maybe it will look ok for Vortex, but I would have expected Hasbro to do a little remolding and hide the fists some other way for Alpha Bravo and Blades, like as sponsons or fuel tanks or something. The Airwolf reference was a good one, but even Ernest Borgnine had the sense to keep those armaments hidden most of the time.

In spite of that misstep, I completely agree that Combiner Wars is making great strides to bring solid playability and excitement to Transformers. I may personally be a fan of the most complex designs like MPs, Binaltech/Alternity, and the RoTF disasterpieces, but I can appreciate that those are bad toys, and these are great ones.

Since Animated ended, I haven't been inclined to buy any official Transformers from local toy stores. Prime and Age of Extinction especially seemed like toys that weren't worth the MSRP. But after reading your reviews of Alpha Bravo and Dragstrip, I decided to take a chance on the now and hit my local Wal-Mart. And I'm glad that I did.

Skydive is kind of eh, but Alpha Bravo, Fireflight, and Silverbolt are pretty cool. Looking forward to snagging Air Raid and Powerglide. Next month, I'll hunt down the Stunticons.