Allocator is Toyworld's take on the classic Constructicon, Hook. Allocator comes packed in the same heavy weight cardboard box that the rest of the crew has come in. Allocator Comes packaged with color instructions, a sticker, his rifle, the combined mode head, and replacement parts for Unearth and Bulldozer. 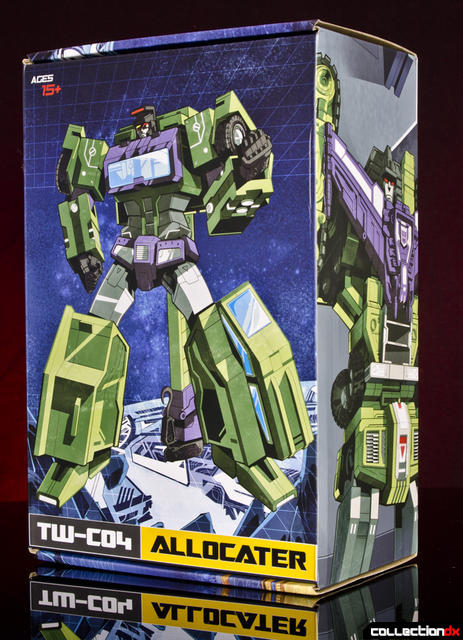 Allocator has numerous paint applications all over, both in bot and vehicle mode. All of the paint apps on mine are nice and clean. 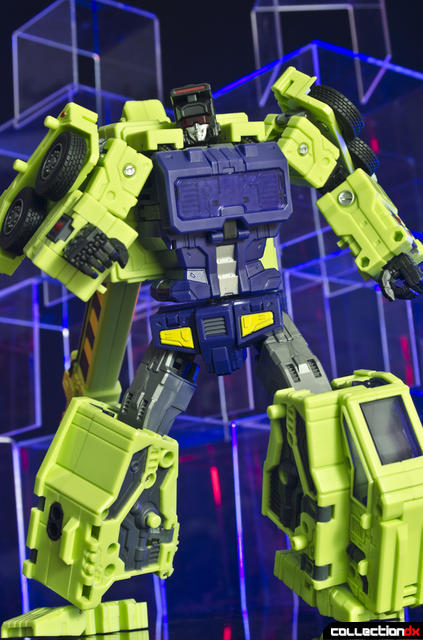 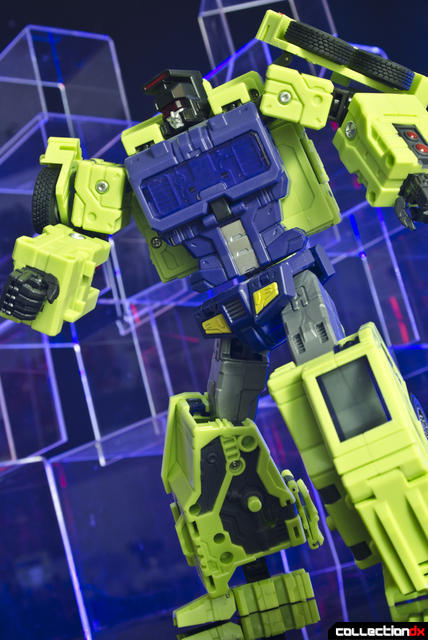 Articulation is above average for a transforming toy of this size. He has excellent range in his shoulders and hips wich allow some very nice dynamic poses. The shoulder armor has several points of articulation and moves around freely to allow the arms full range of motion. The tabs that lock his back pack into place can interfere with the heads range of motion, but only in extreme poses. 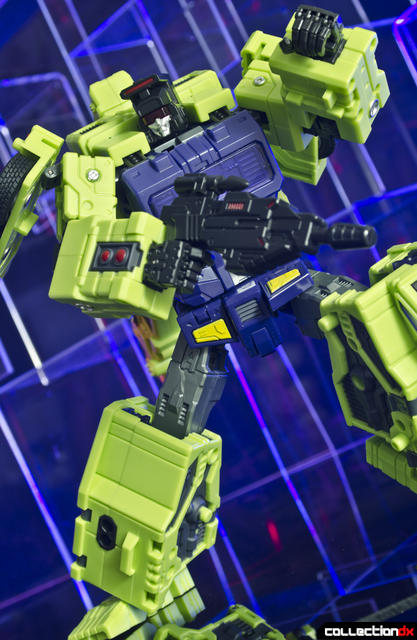 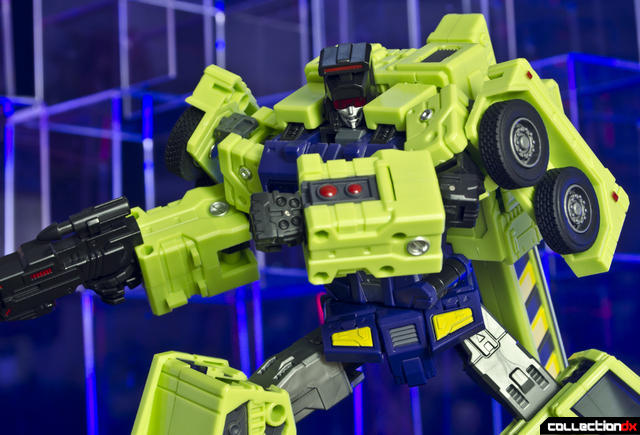 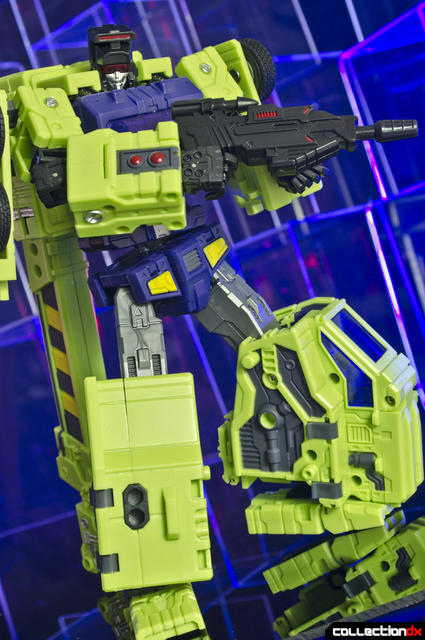 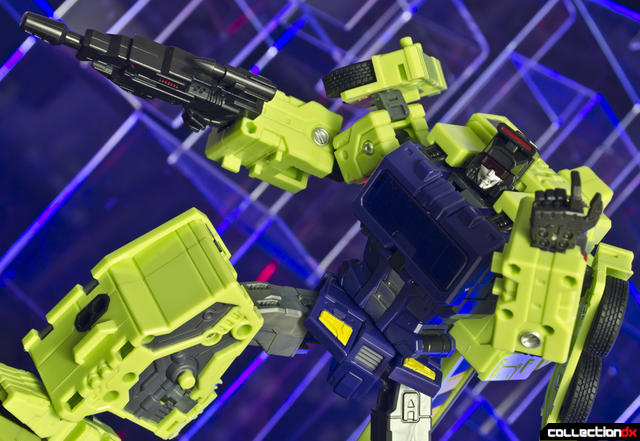 Allocator has excellent balance. I was worried that I would constantly have use his crane arm as a prop, but he stands just fine on his own two chunky feet. 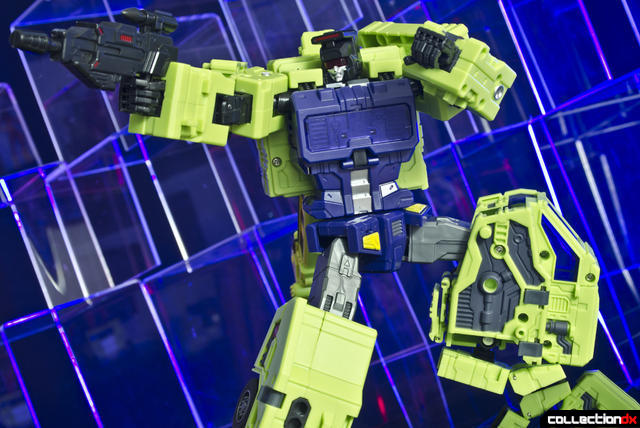 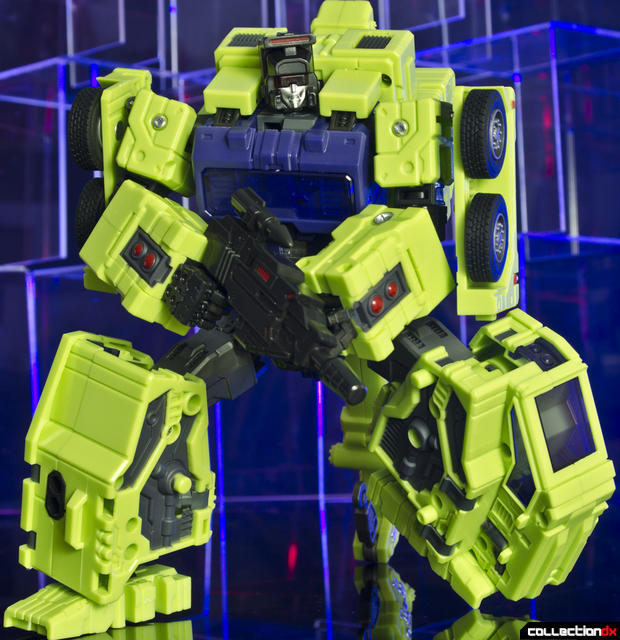 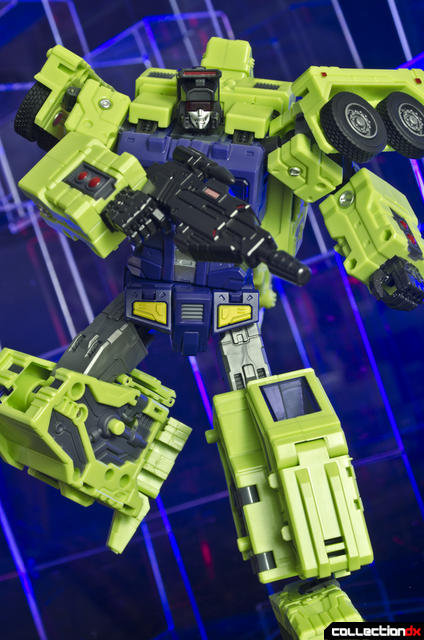 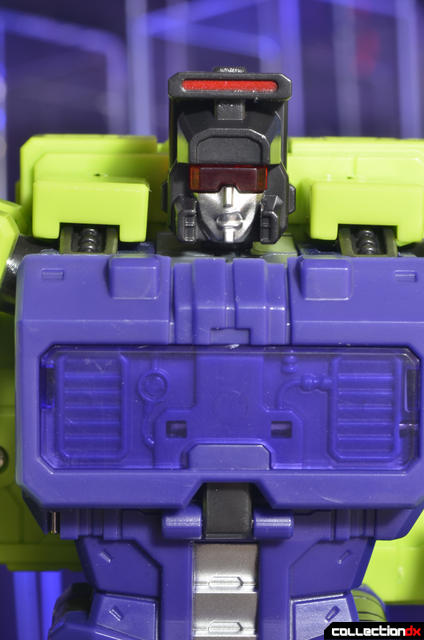 I have a few gripes with robot mode, the first being that the hands were very had to swing out of the forearms. Couple that with the articulated fingers and i'm very afraid i'm going to snap one off sooner or later while trying to swing the hand out. My second gripe is that the ankles on mine were somewhat loose and needed to be tightened, no big deal there really. Lastly, the crane arm can swivel on Allocators back if it is unlocked, but the crane arm cannot be posed coming over his shoulder. Not so much an error, as a feature that I would have liked to see included. Aside from those few issues, robot mode is mercifully error free. 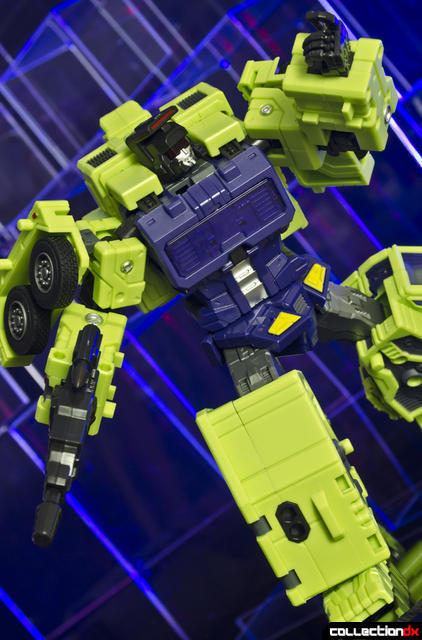 Transformation to alt mode is pretty simple and intuitive. 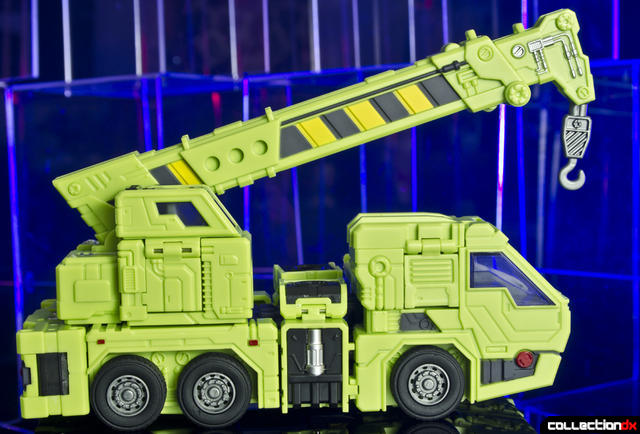 Alt mode comes together very nicely and has no real kibble unless you count the feet behind the cab. 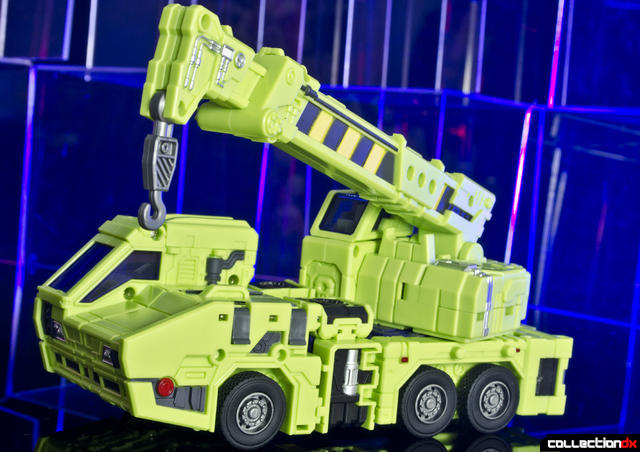 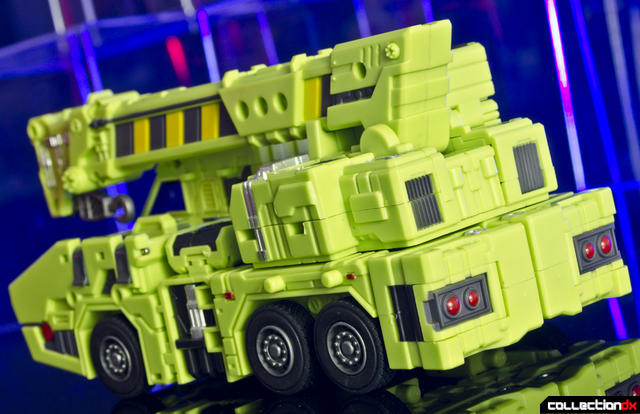 The crane arm can swivel, extend, and be tilted up and down, and the hook can swing backward and froward. All of the tires are rubber and roll freely, and the gun can mount next to the cab. All in all, I really like alt mode. I would have liked the crane arm to have a few more stops between each ratchet click, but that's just nitpicking really. The only real gripe I have with alt mode, is that the tabs that join the feet to the cab don't come together as nicely as they could have. It doesn't really effect alt mode, but the feet can look a little crooked if viewed from the top. 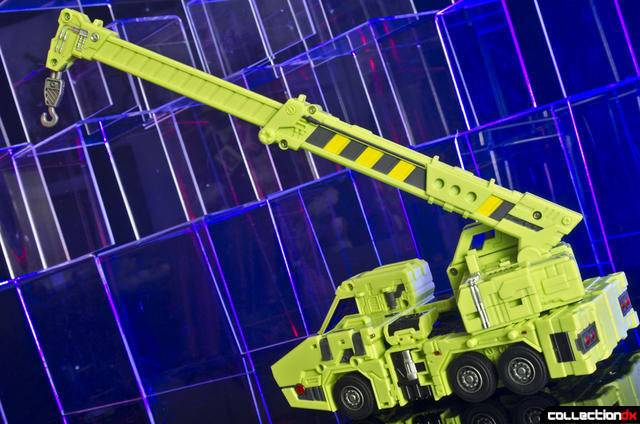 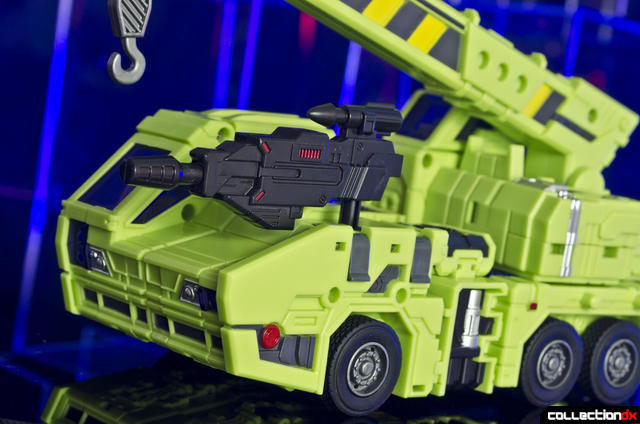 The Combined mode head has light UP LED eyes and a visor that slides down. 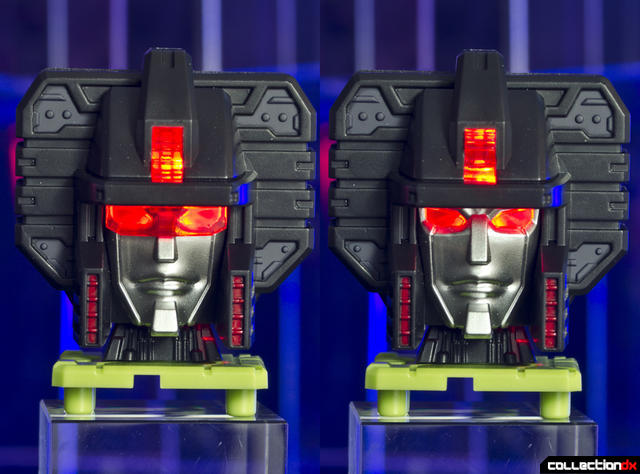 All said and done, Alloctor might be one of the best, if not THE BEST release in this series. In a line plagued by poor design choices and QC errors, Alloctor is relatively free of errors. On top of that, his chunky, well balanced robot mode and kibble free alt mode are a ton of fun to play with. 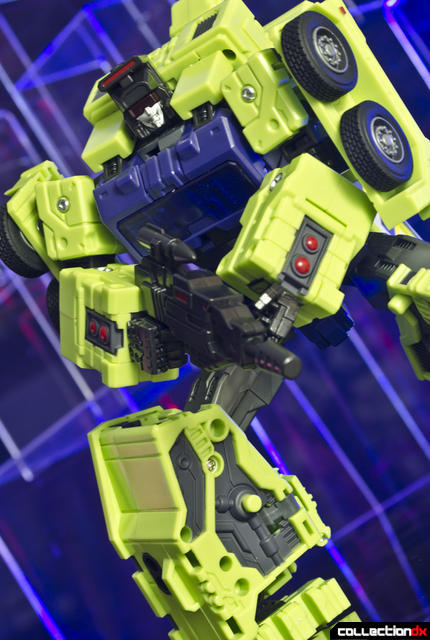 3 comments posted
Excellent as a surgeon should be

Figures the one who's a perfectionist would get the nigh-perfect figure. Looks really good and really looking forward to the final result. Don't know if it'll be boxset or singles, but I'm probably going for the yellow version they just announced whenever that hits.

What are the replacement parts for Unearth and Bulldozer for?

They are replacement parts for the elbows that had issues with cracking.