M.A.R.S. Converters seem to have come and gone from most retailers but a few still linger on store shelves. I swear I must have passed by this particular toy at Wal-Mart dozens of times but never felt the need to own it. Since this guy has endured the Transformers above him going through at least three or four entire toy lines, I decided he needed a good home. 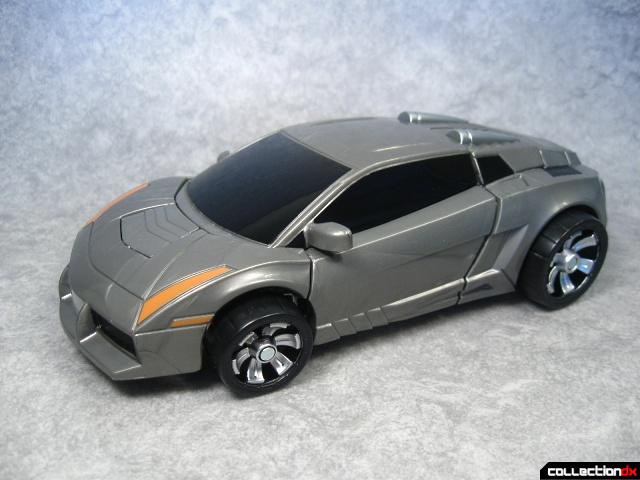 Accelerator is a gray sports car of indeterminate model. He's an all plastic toy that is roughly seven and a half inches in length as a vehicle. 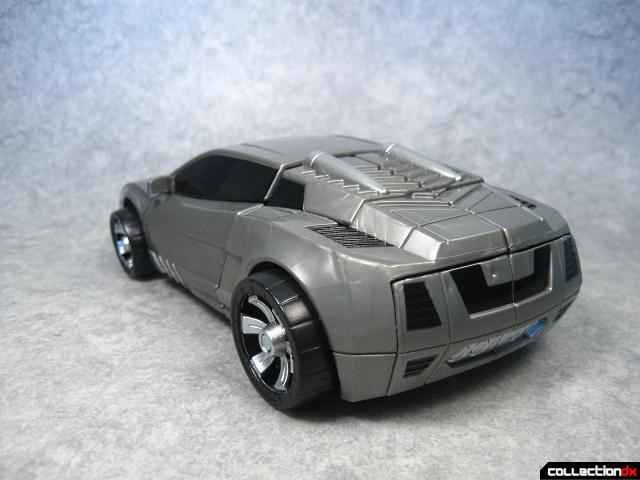 While his quality isn't quite up to the same standard as most Transformers, Accelerator still feels quite solid and everything lines up neatly in car mode. 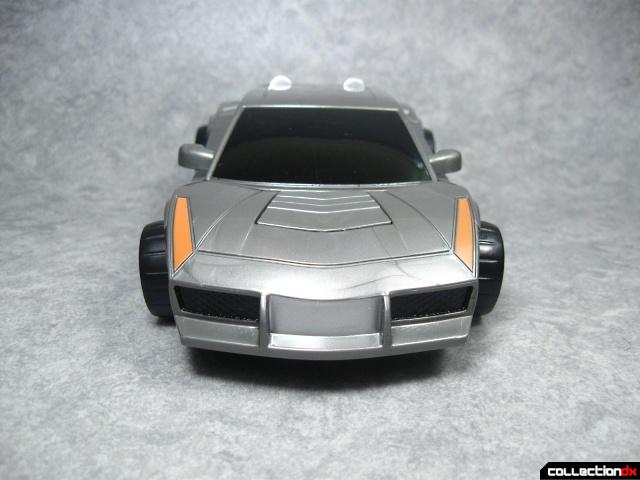 Accelerator has a good amount of detail all around with crisp paint apps highlighting things such as his car mode headlights. 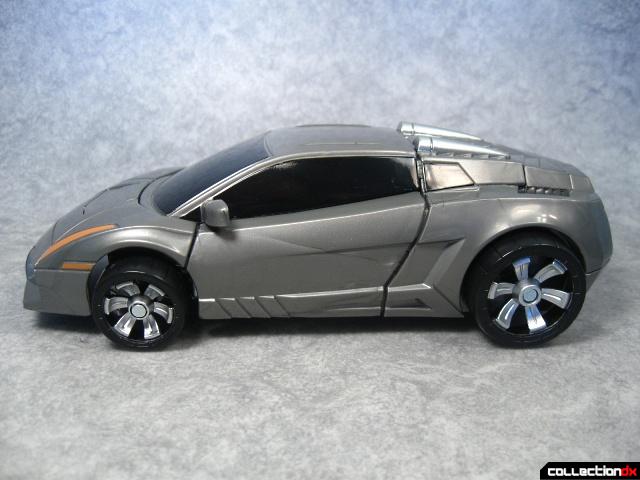 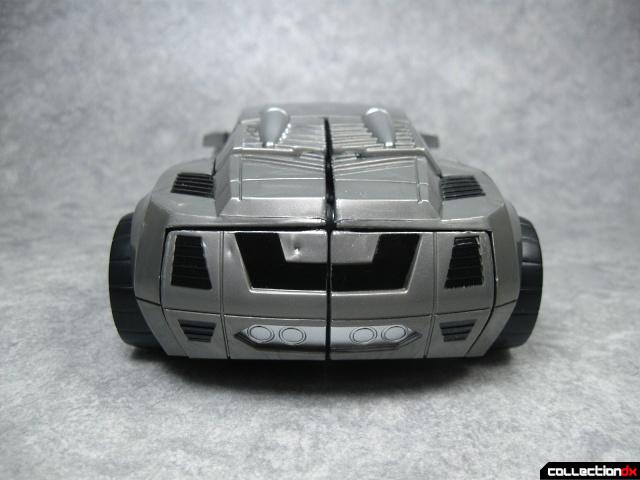 From the rear a nasty seam can open up if you don't squeeze his legs together enough. It can be done but feels a little mushy. It helps to push the legs together near the top of the car to force everything closer. 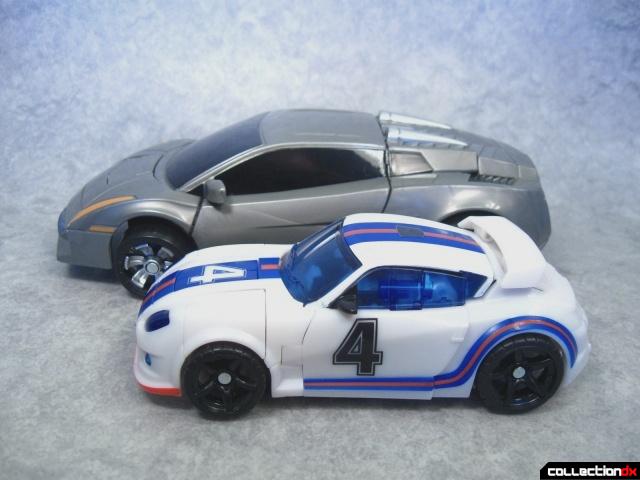 Accelerator costs about as much as a typical Deluxe Class Transformer car but is much bigger. 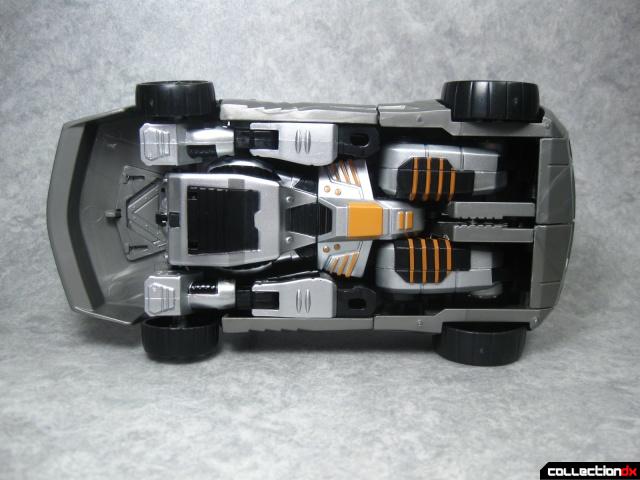 By turning the car over we can see most of Accelerator's robot mode tucked tidily underneath. 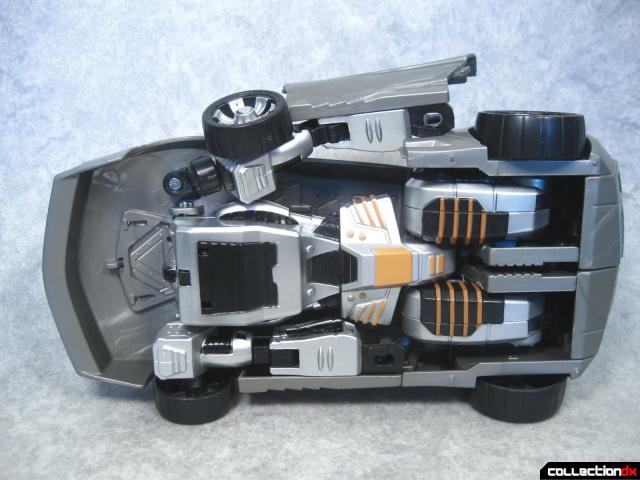 The overall conversion process is similar to to most Autobot cars and begins with dislodging a bunch of tabs that hold the arms in in place. Be advised when going back to car mode the hinged shoulder assembly needs to end up with the curved end pointing towards the front bumper. 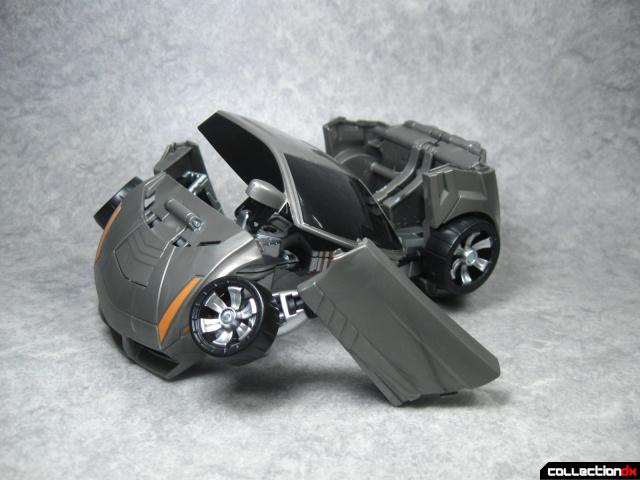 Everything else is agreeably competent. There's a few extra touches like how the roof moves around on its own swing arm and rotates 180 degrees. 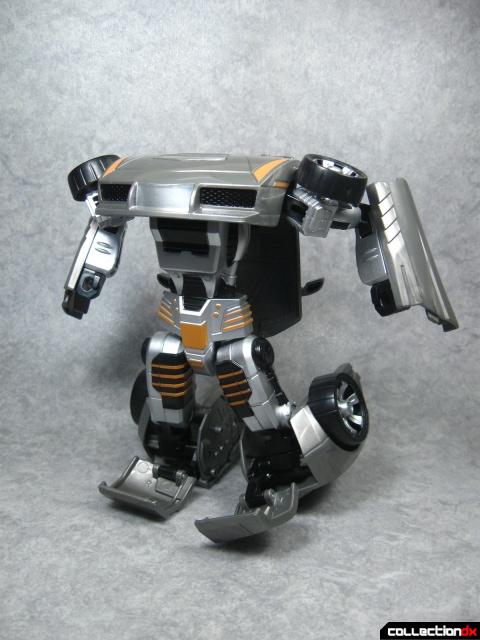 As everything unfolds, Accelerator takes a familiar shape. 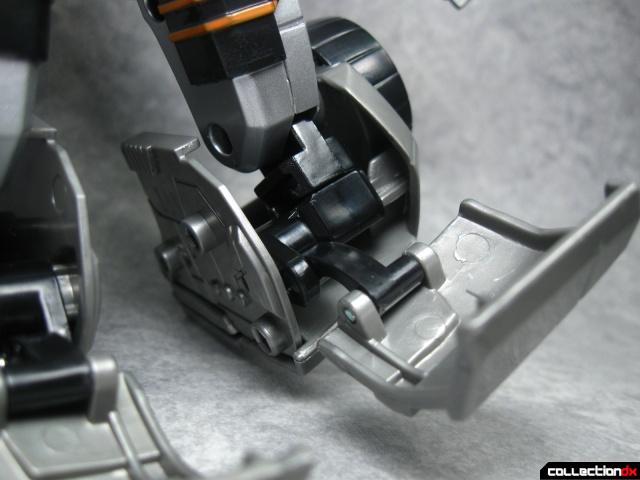 One cool bit of engineering is how the rear of the car becomes a pair of movable knee guards. They have their own rotating armatures that move separately from the main knee joint. 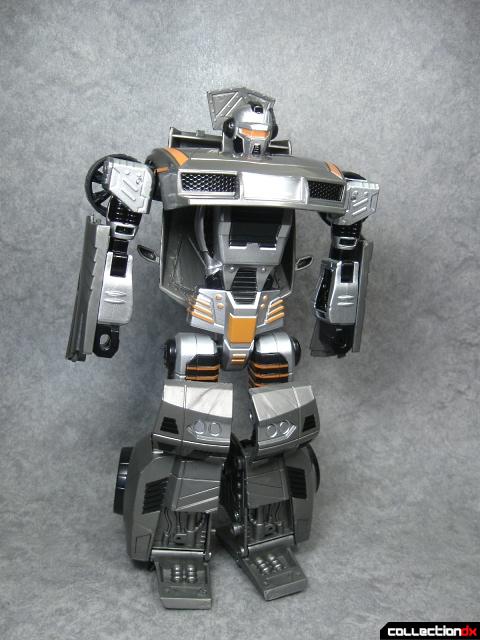 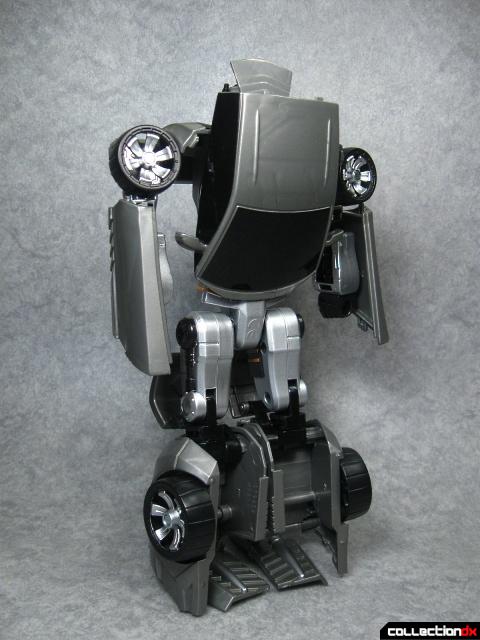 His a tidy looking toy with basically no extraneous parts. Unfortunately the roof doesn't peg in anywhere and just has to be rested up against his back. 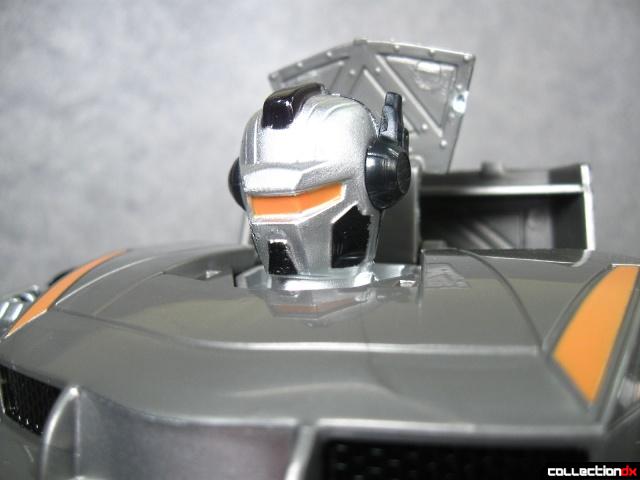 When you push down the front of the car, Accelerator's head pops up through a hinged door on top. It's a really cool gimmick that works every time. The head itself is a good looking if somewhat generic design. 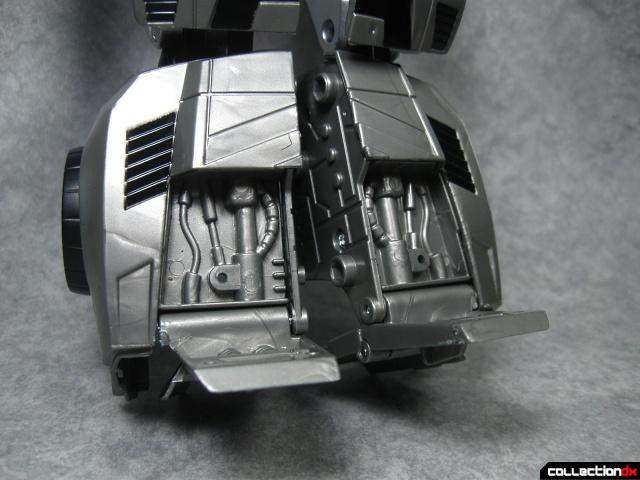 When feet are unfolded from the rear of the car they expose some extra mechanical detailing. It's a nice touch and shows the designers were thinking about both modes. 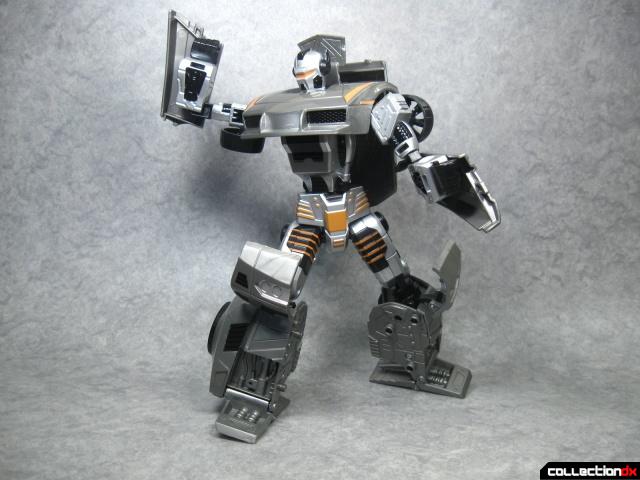 Accelerator has a good amount of articulation and even goes as far as to have waist joint. The only thing he's missing is a way to turn his head. Some of his joints are a bit loose though and his arms can pop off at the ball-jointed shoulders. Nothing feels like it's going to break though. His shoulders are a little ridiculous as they feature both a ball-joint for rotation and a universal joint for swinging them out to the side. His legs feature an extra swivel joint just below the knee. All of this together gives him a lot of posing options. 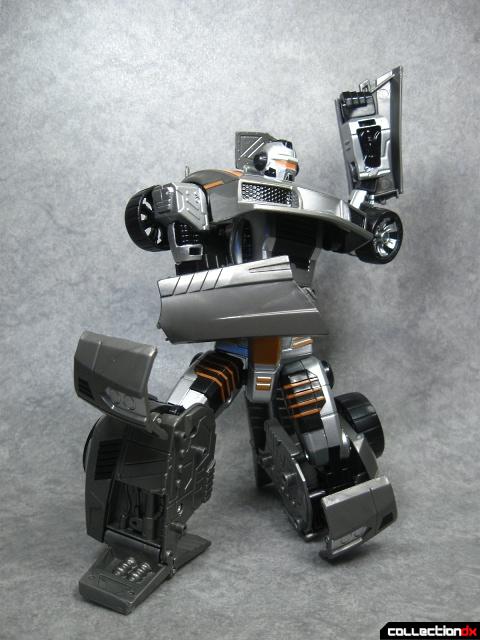 He can kneel down pretty easily too. 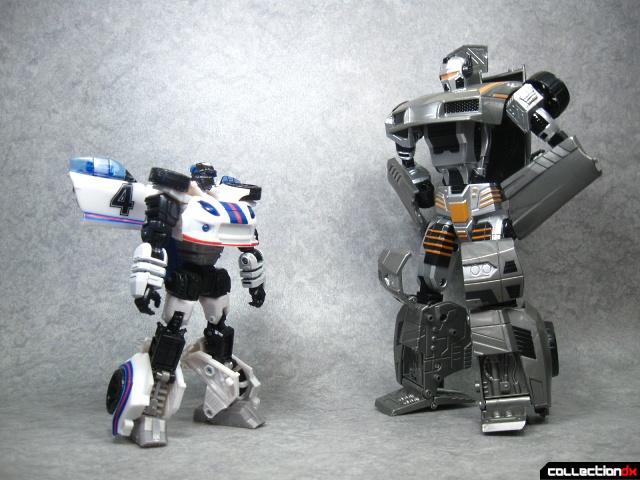 Accelerator's size has made him quite haughty among other transforming cars. 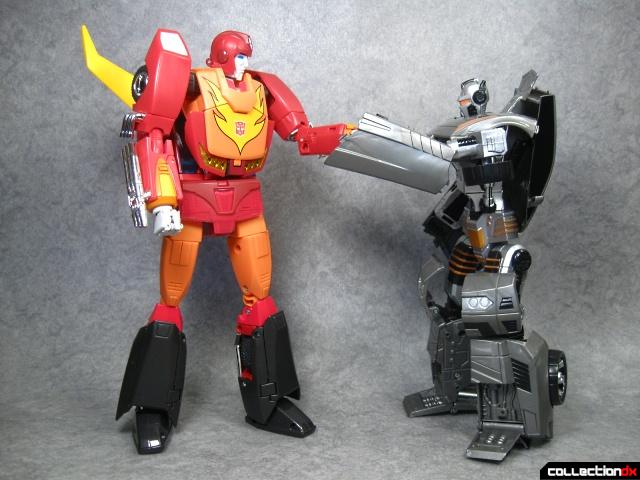 He still respects the real masterpieces though. 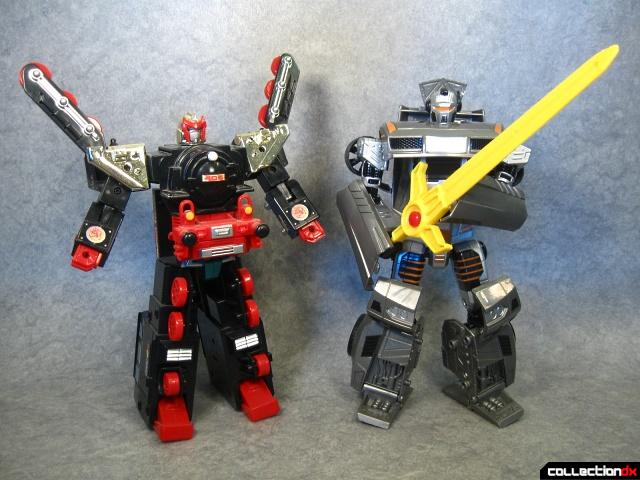 I've bought a lot of off brand transforming robots over the years and it's exciting to see how they evolved to match their mainstream counterparts. From the days of clunky bricks like Classic Train Bot we have now arrived at fully articulated robots in disguise at bargain prices. Due to his weird oblong fist holes, Accelerator can't carry most Transformers weapons but with a little help from his forebear, he can still wield a sword. While Accelerator is a little rough around the edges, he's still a solid figure who won't break the bank.

3 comments posted
And i thought i was the only

And i thought i was the only one who used Generations Jazz as a size comparison!

I should stop putting it off and go buy this guy. I always see him at Walgreens.