Before I start the review, I would like to thank NekroDave who helped land this piece of Korean insanity into my hands. Thank you very much for understanding my Voltron sickness.

As a kid I always wanted a Voltron yellow lion. One day, I finally got one. I was so happy. Then I tried to transform it into a leg and somehow ended up with a crappy yoyo... Then I woke up. It was all a dream. Or nightmare.

Imagine if you will then, being a child in Korean back in the 80's. All your cool friends have skateboards and Voltron toys. So what do you do? You ask Santa for both of course. Except maybe you forgot to add a comma in there somewhere which resulted in you getting this. A set of skateboarding Voltron lions! A real living nightmare that you can't wake up from! Imagine the horror of unwrapping a gift and seeing this. The box front says "Warrior Voltron" The lower right corner has what appears to be a manufacturer logo that reads: "Good friend- My Friend" and right below it reads" Seon Toy" or "Sun Toy" 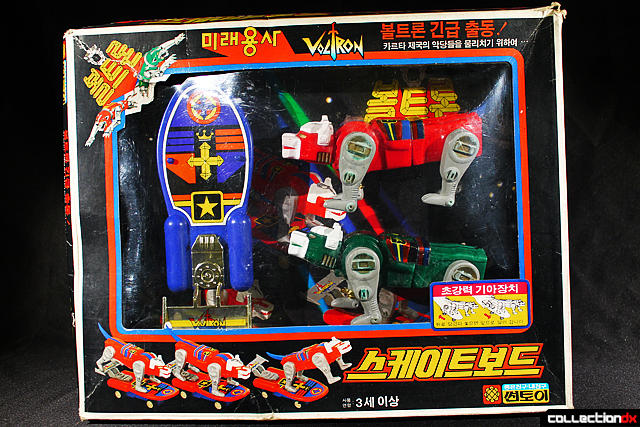 The back is just as crazy because it illustrates the red Blue Lion having way too much fun on the space skateboard. The back says: By riding like a skateboard, Voltron will come to the rescue in an emergency and they will fight to save the princess" WTF?! 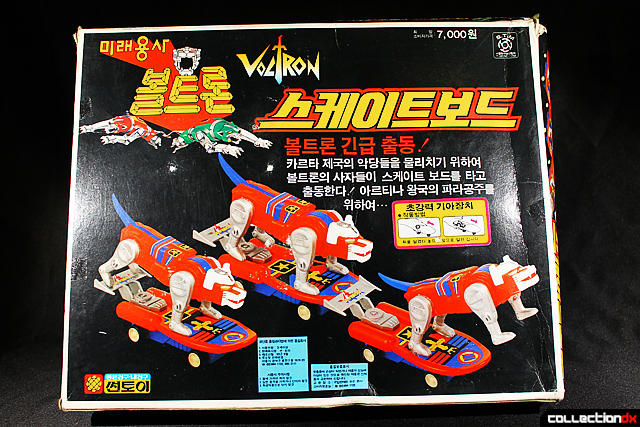 At first you are confused. It's a Voltron toy, but it's not really. I mean, you can't even combine the darn thing. It's got a Red and a Green Lion, but they're actually both Blue Lions! Then to top it all off, it comes with a friction motorized space skateboard. I think the surfaces of this toy would test positive for LSD. I would have loved to be present during the approval of manufacture of this toy. Each piece is loving secured to the backing card with gold foil twist ties. 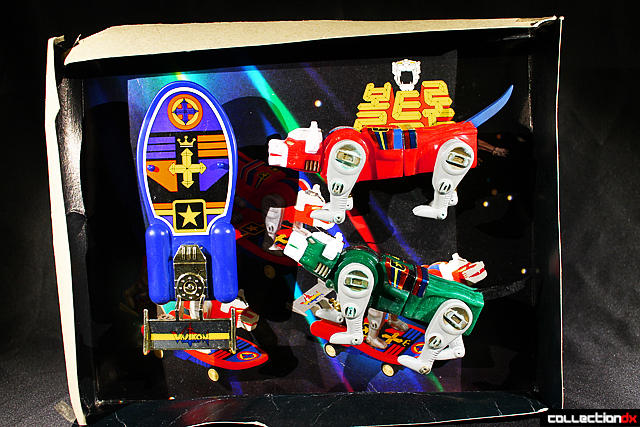 Once you've removed said pieces form the backing plate, you are visually attacked again with the same pictures found in the back of the box. Look at all the pretty colors. 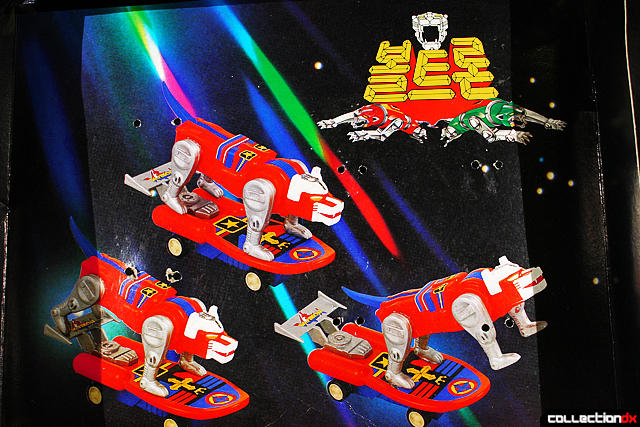 The lion figures are just as horrid as the lighting I used to take the picture. The lion tails come to a point and are not articulated. The figures themselves are made of soft vinyl. And not the good kind. It appears the round joint pieces on the legs were at once a gold color which has corroded itself into a toxic green. 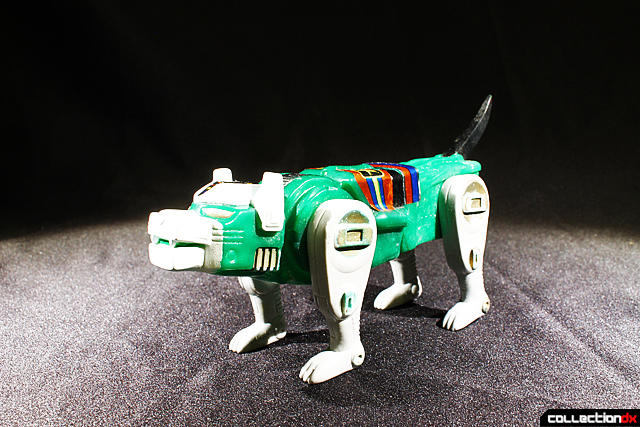 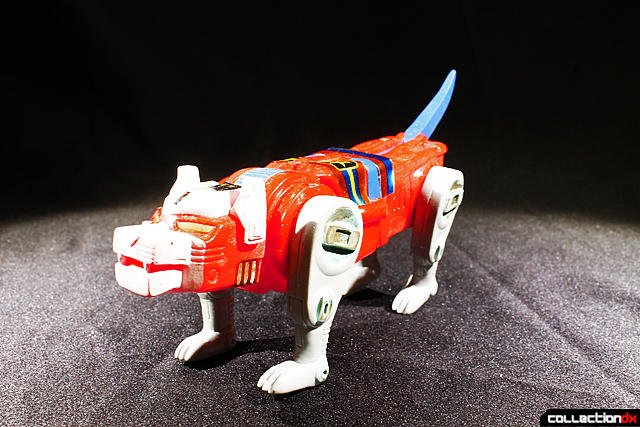 Each lion is decorated in colorful metallic stickers which surprisingly, are still attached to the figures. 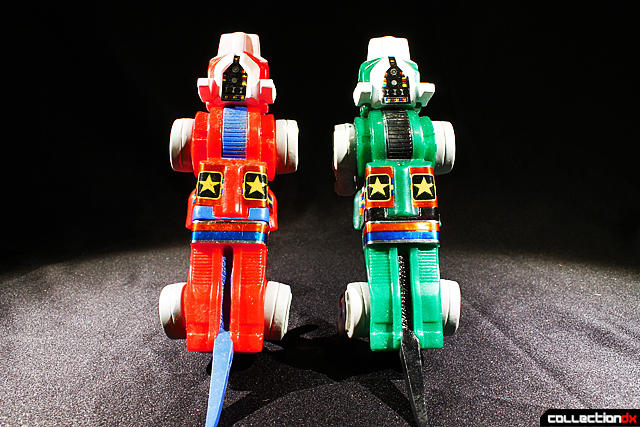 These red and green Blue Lions do something that the diecast leg lions don't. They articulate at the waist. 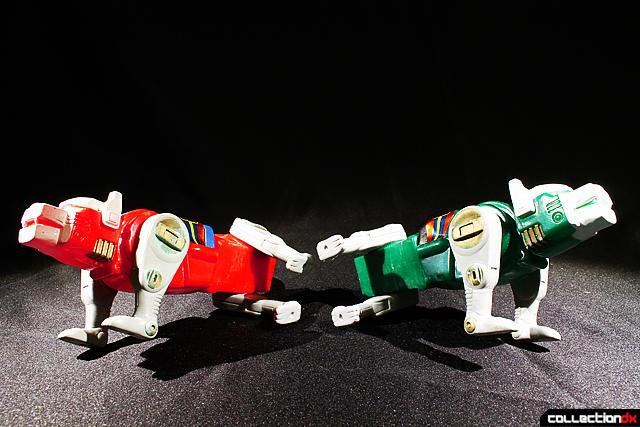 The legs are only articulated on the shoulder and hip joints. 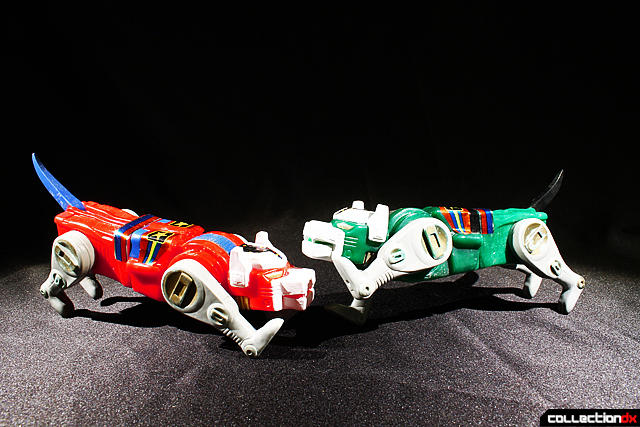 Even the heads swivel. 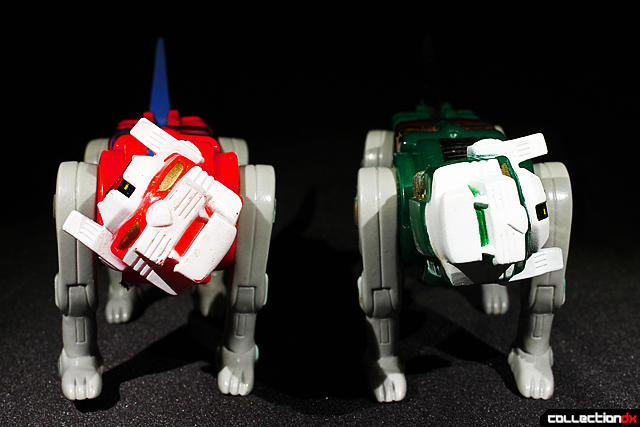 Here they are next to a diecast Blue Lion for size comparison. 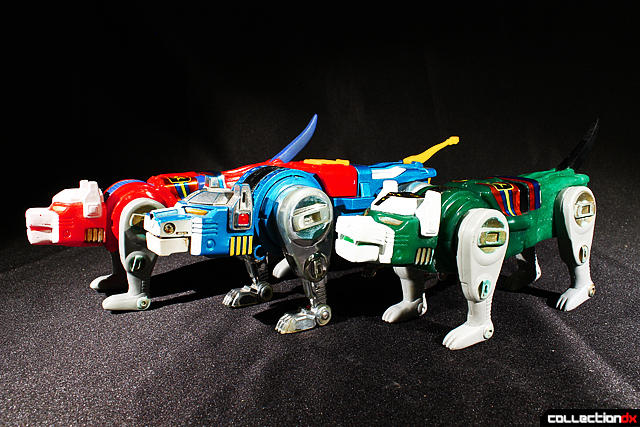 Prepare yourself for the great space skateboard. 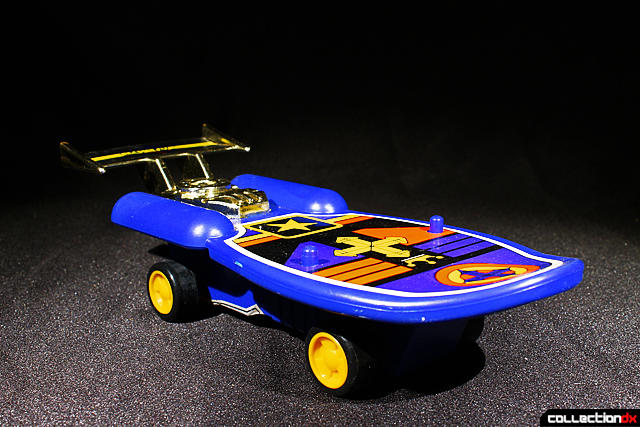 This heavenly piece of engineering features ABS plastic and a friction motor which is made useless by a 30 degree bend on the outboard part of the axle. Makes for a very wobbly time. No need to fix it. It was probably done on purpose. 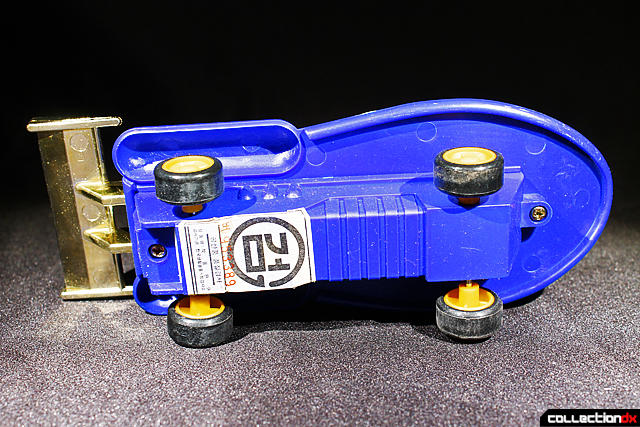 Soft vinyl isn't a precision process, but the tolerances are way off. The legs cannot even peg into the skateboard. 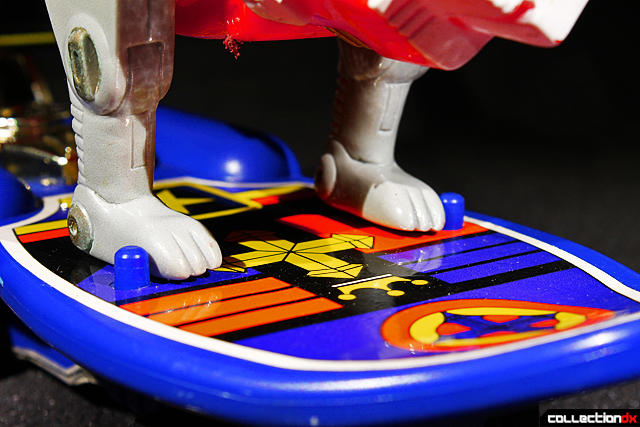 Even if they weren't off, the holes they punched into the bottom of the feet, are not nearly big enough to allow the tabs to slip in. Maybe at some point the vinyl was soft enough to allow this, but the decades have stiffened it up a bit. 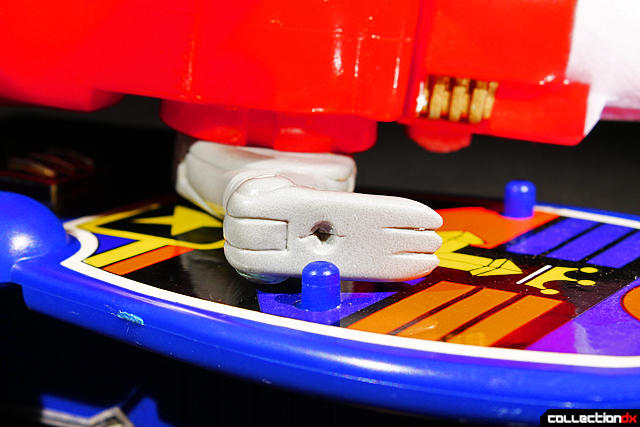 Regardless, you can stand the figures majestically upon the space skateboard. 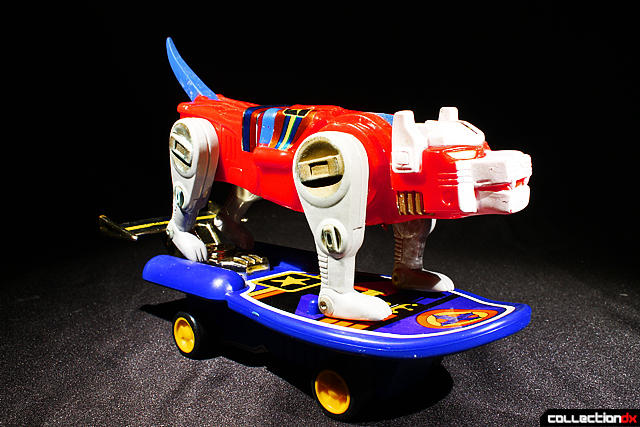 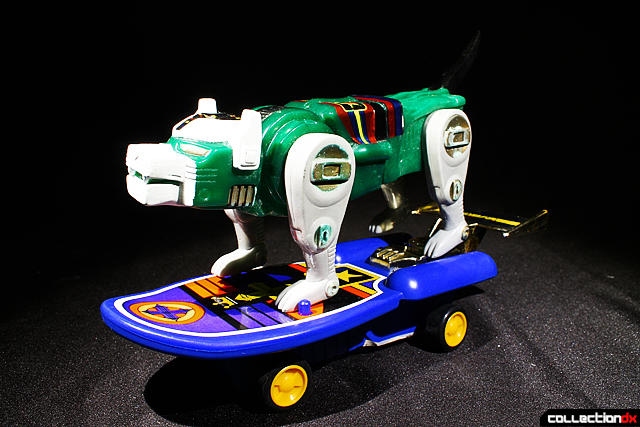 The lions may look silly on the skateboard, but Mattel's Blazing Sword Voltron looks right at home. I hope I don't fail any drug tests after having reviewed this. 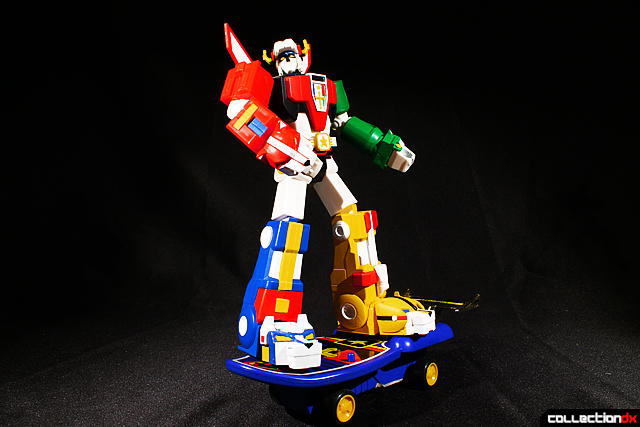 Although I love this piece, I don't recommend this unless you are absolutely bonkers for anything and everything Lion Voltron related. Or maybe tripping.

This looks like an extremely good toy and I bet it's a lot of fun.

I have to agree, its not a very good toy, but back in the 80s, even now, some kids would be thrilled to have a toy, its just a luxury that some can't afford. The existence of these cheap knock offs definitely has its place

The last picture though.

Lion Voltron/GoLion doing tricks on a giant skateboard has all the makings of a T-Shirt illustration.

Go-LoLion can haz cheezburger? Skates board?

...Wow. another wonderful wtf grade toy. Good to see its accessory works with the real thing!

Voltron! Form Blazing Kick Flip! ... but I don't think you'll nail the landing off the railing along the stairs leading up to the library without taking a nut shot.

Glad to help add this crazy oddity to your fantastic Voltron collection. Such a strange idea, but then again, is it really any more bizarre than, say, Grendizer riding a tricycle? LOL

" As a kid I always wanted a Voltron yellow lion. One day, I finally got one. I was so happy. Then I tried to transform it into a leg and somehow ended up with a crappy yoyo... Then I woke up. It was all a dream. Or nightmare. "

This paragraph makes me so happy.