Ryune Zoldark was the only child of Bian Zoldark, genius scientist and leader of the revolutionary Divine Crusaders. The Valsione was custom made for her after she rejected the Valsion that had been prepared for her; despite her tomboyish personality she turned it down on the grounds that "it wasn't cute". How that comment led to the construction of a giant robot girl with a human looking face and hair is beyond me, but the Valsione is a one of a kind unit that appears semi-frequently in the SRW games, putting in appearances in the classic, Alpha and Original Generation timelines together with its upgrade, the Valsione R. The suit responds based on the pilot's movements; even the Valsione's face changes to match Ryune's expressions, and its frequently happy disposition (combined with the fact that it is a female robot) has cemented the Valsione's status as a fan favorite.

As usual, I've plumbed Youtube for some game footage. This video's quite long, but it's really only the first 1"45 seconds that are pertinent to the review. Maybe just leave it running and enjoy the BGM track? 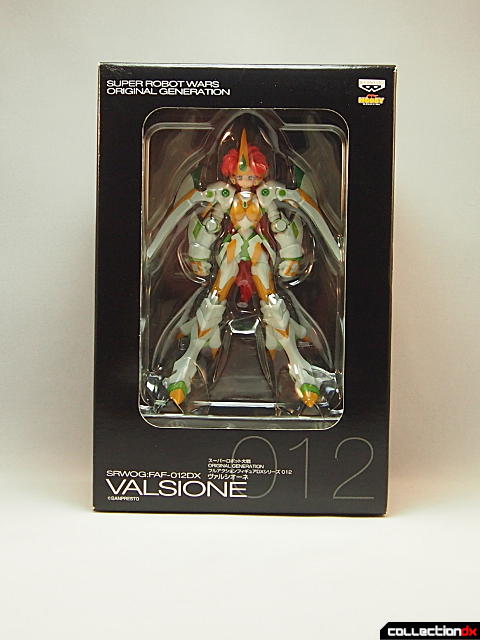 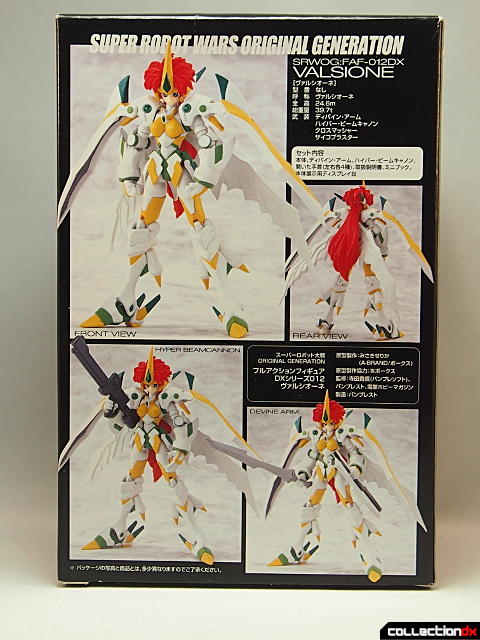 We are back to the earlier days of the FAF line with this release. The Valsione never got a rerelease through Volks. 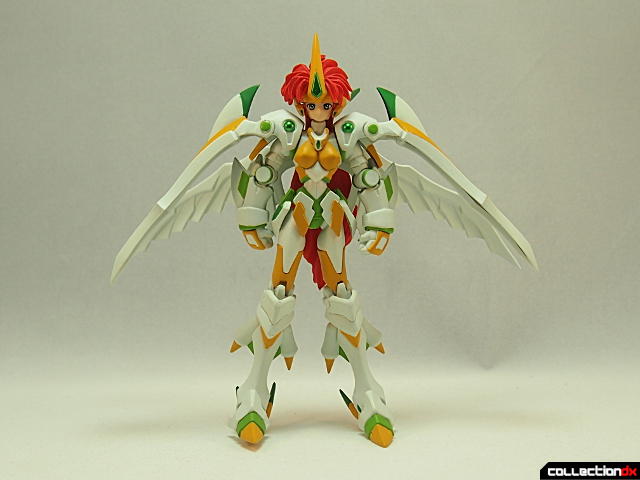 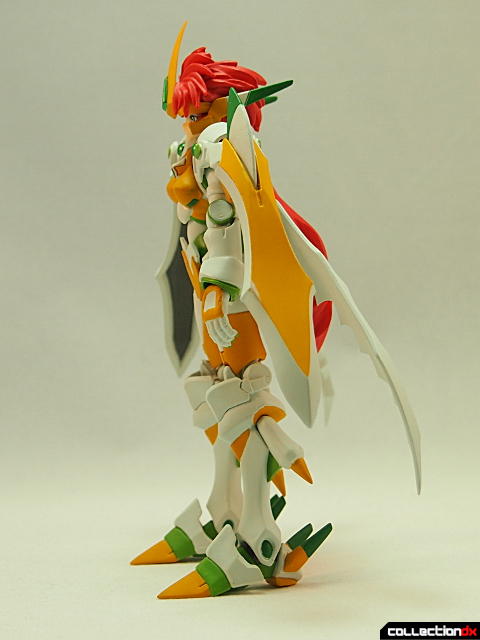 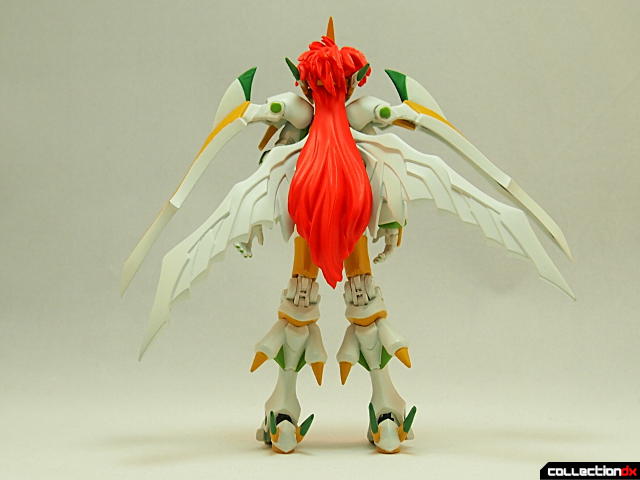 This version of the Valsione is a redesign for the Original Generation games. It generally keeps the look of the classic iteration, but it replaces the Valsione's four thrusters with two wing-like appendages, redesigns the shoulder guards, and adds more green into the design. I was amused to discover that the artist in charge of the redesign has become fairly popular for his adult comics, but since this is a family site I'll keep his pen name to myself.
And since we're already in deep I might as well mention that Japanese idol, cat-taster, neologist and SRW super fan Shoko "Shokotan" Nakagawa cosplayed as Valsione in a campaign to promote the release of SRW: OGs for the Playstation 2, of which you can watch footage here. And now things have gotten too weird, and we need to get back to the toy. 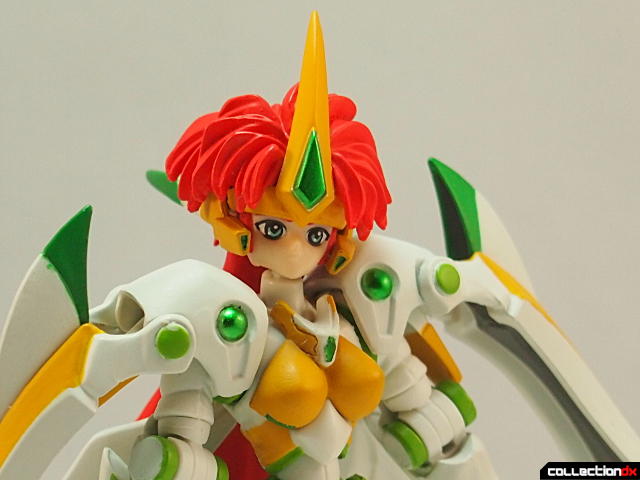 The Valsione breaks my personal streak of FAFs with great finishes by being expectedly FAF-like. There's overspray and color bleeding, and imperfections in the paint and from the mold. There's a lot of scarring on the PVC, especially on the back of the legs. That good old waxy feeling is back, but it's thankfully limited to the lower legs. The right knee assembly is crooked in a way that I can't quite figure out, but it prevents the extended leg from sitting flush (Actually, upon further inspection both knees are crooked, but it's not as noticeable on the left side). Thankfully the face and the eyes are problem free (the eyes might be tampo printed). I wish the face was a little more emotive though. The sculpt is pretty nice overall, except that the hair, particularly the back portion of it, is kind of oddly shaped. 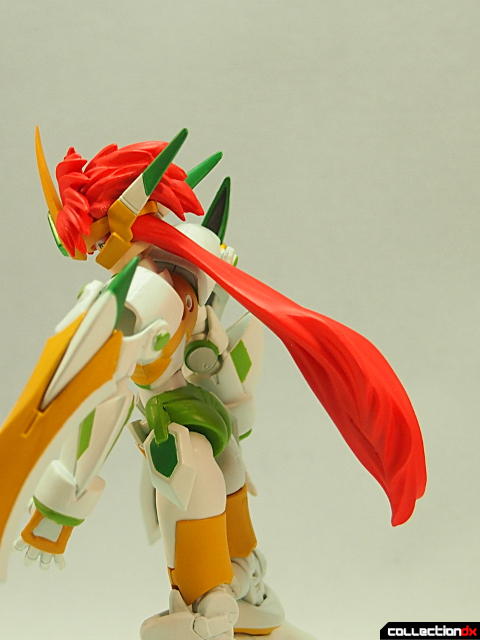 It reminds me of like, some sort of tail.

Poseability is passable, mostly thanks to her slender frame. 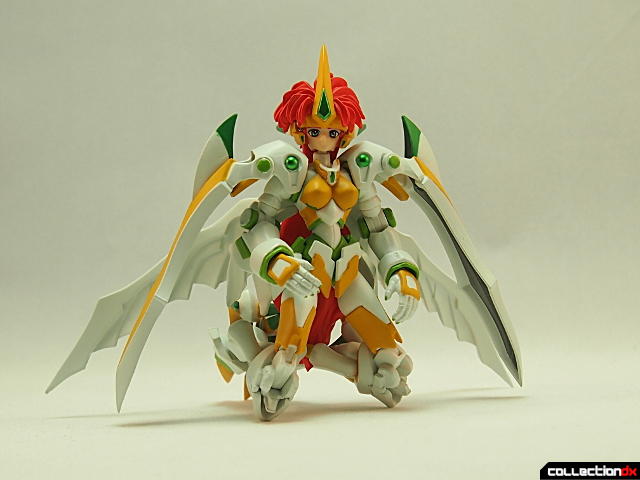 The only double joints present are in the knees, but the sculpt is actually designed to accommodate the joints for once and the range of movement in the legs and arms is good. 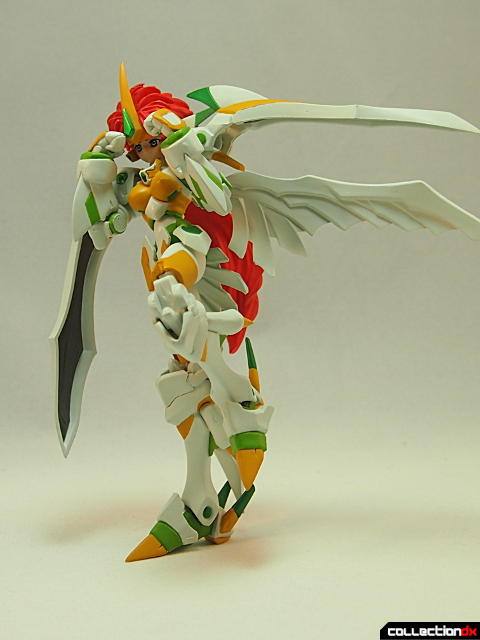 The shoulder guards rotate independently of the arms, and both the large protectors and the smaller ones underneath swivel. The shoulders themselves are ball-jointed, but unfortunately they don't do much besides rotate, allowing for only about 15 degrees of lateral movement. There's a bicep swivel in the arm. The hands are ball jointed, but the Valsione's cuffs extend all the way up to the hand, so they are for all intents and purposes only capable of rotation. 3 total pairs of hands are included, not counting the ones stuck to weapons, which is about the normal number when Volks or Dengeki Hobby or whoever was feeling generous. (This is the point where I usually mention how rare ball jointed hands are for this line. A lot of my recent reviews have them, it just worked out that those were the ones that got saved until this point). Also, there's an abdominal/torso joint, which I don't think I've ever seen on a FAF before. It's not good for much, since she springs back upright when you try to take advantage of it. It's like, too stiff, or too rubbery or something. The ankle joints are really weak, and trying to stand her straight up without a forward lean takes patience, although this could probably be fixed with the usual methods. On paper she should be much more poseable than the average FAF, but it doesn't quite come out in practice.


The "wings" as well as the front skirt armor connect to the body with straight pegs. 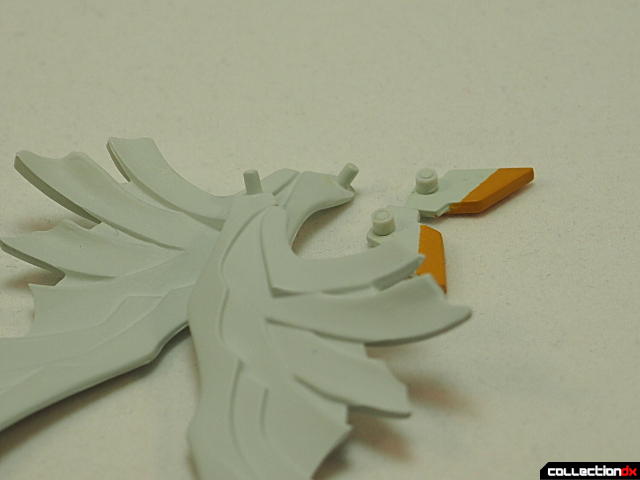 These. Pieces. Are. Terrrrrrrrible.
The pegs are infuriatingly short.
The wings tend to push themselves away from the body whenever moved, and the forward movement of the legs frequently knocks the skirt pieces off. IT KEEPS HAPPENING.
The hands also snap in with such force that at least one wing tends to go flying each time the hands are changed. I basically keep the wings in the box so my entire focus can devoted to catching when the skirt armor falls off.
At the very least, the side skirts spare further frustration by attaching via hinge.


Her basic melee weapon is the Divine Arm. 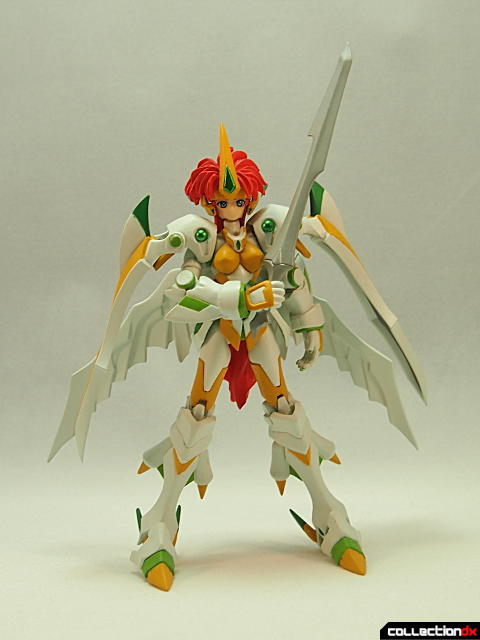 The Guarlion Customs I reviewed had this weapon as well, but this is one of the originals, and more powerful (in the fiction). Also included is the scabbard set in the 'open' position. The Divine Arm cannot be sheathed. 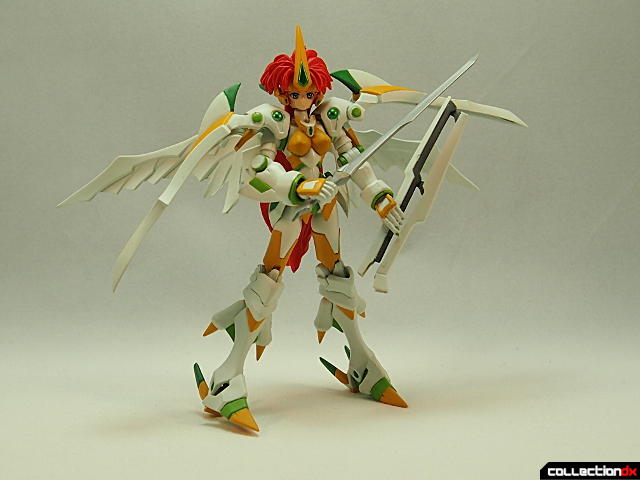 After that comes the Hyper Beam Cannon. 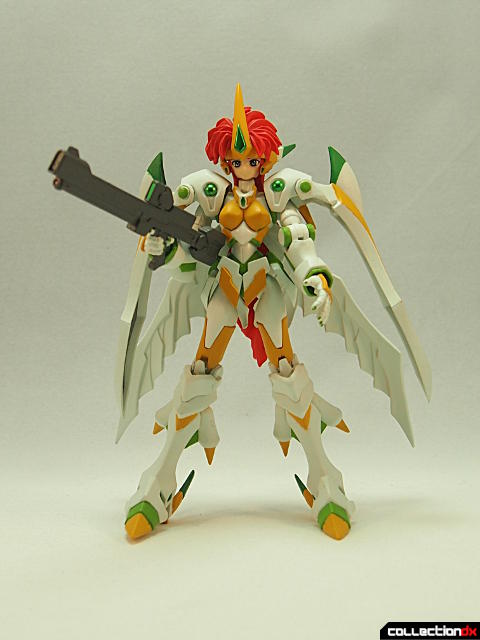 It's a neat looking gun; there really isn't much more to say. 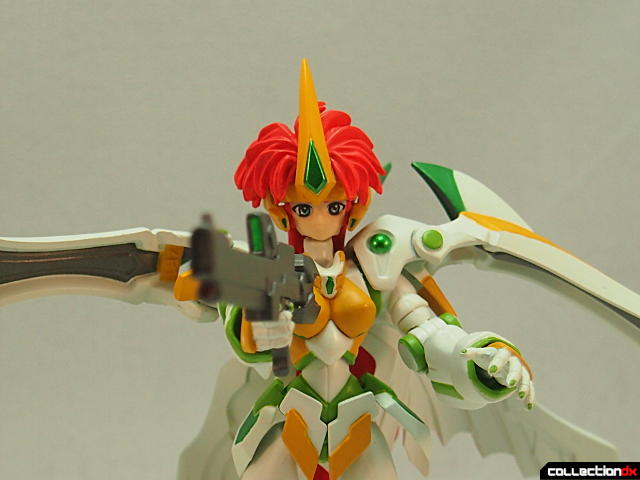 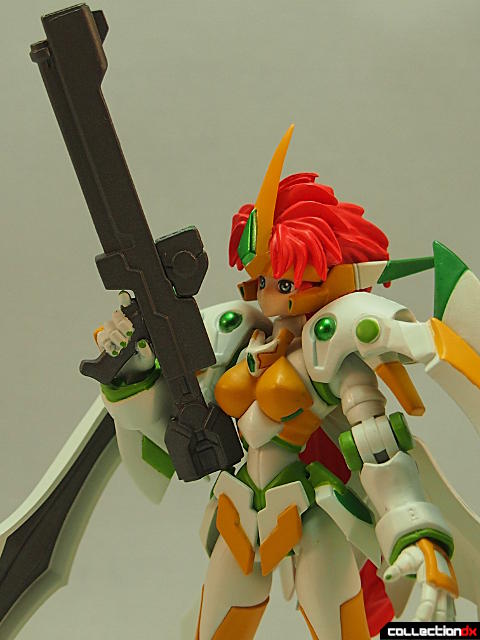 Of course, these are not the attacks one thinks of when it comes to the Valsione. Where, you ask, is the Psycho Blaster? The Cross Saucer, or the Cross Smasher? For those attacks, I respond, please watch the video. I am feeling too lazy to make gifs right now. I promise I will do better next time.

Oh, let's look at the stand and the booklet, since it feels like it's been a while since I last saw one of these. 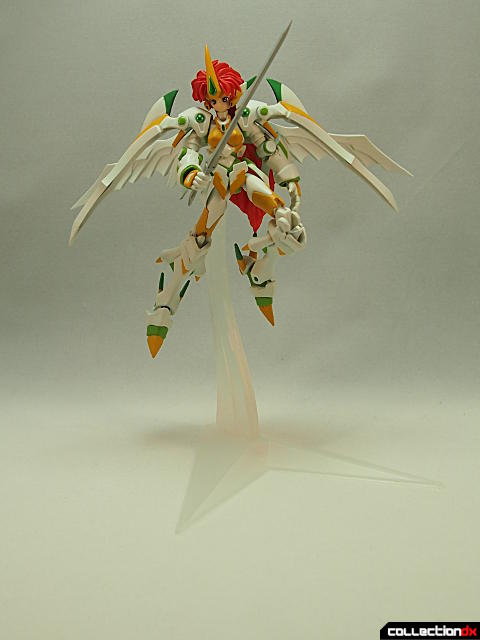 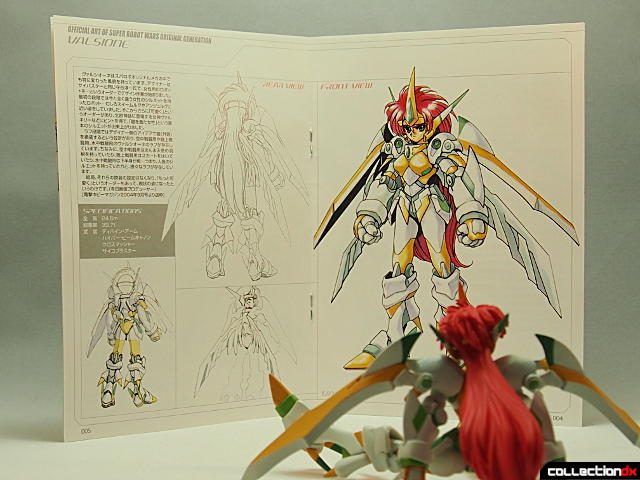 You might have realized that the Valsione is quite small (maybe not from this review but rhetorically speaking). She is the smallest of the my FAFs by at least half a head, and possibly the smallest in the line. That's nonsense because at 24 meters the suit is taller than most of SRW's real robot Personal Troopers. I am staunchly against robot sexism.

On the other hand her smaller stature puts her right at home in my army of robot ladies. 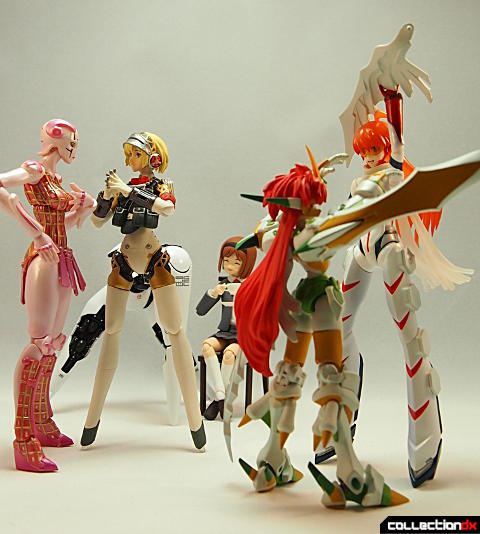 The Valsione doesn't strike me as particularly a good figure or a bad figure, but looking at it does make me kind of happy. If anything, I like having a Valsione that's more or less figma sized (well, a short figma). The Valsione is one of those relatively easy to find FAFs, and it seems to stay around the 3,000 yen range. Not that you probably want one, but you know, just in case.

Next Time: The Valsione R! (It's different!)